The Cat and Fiddle Hotel, Balmain 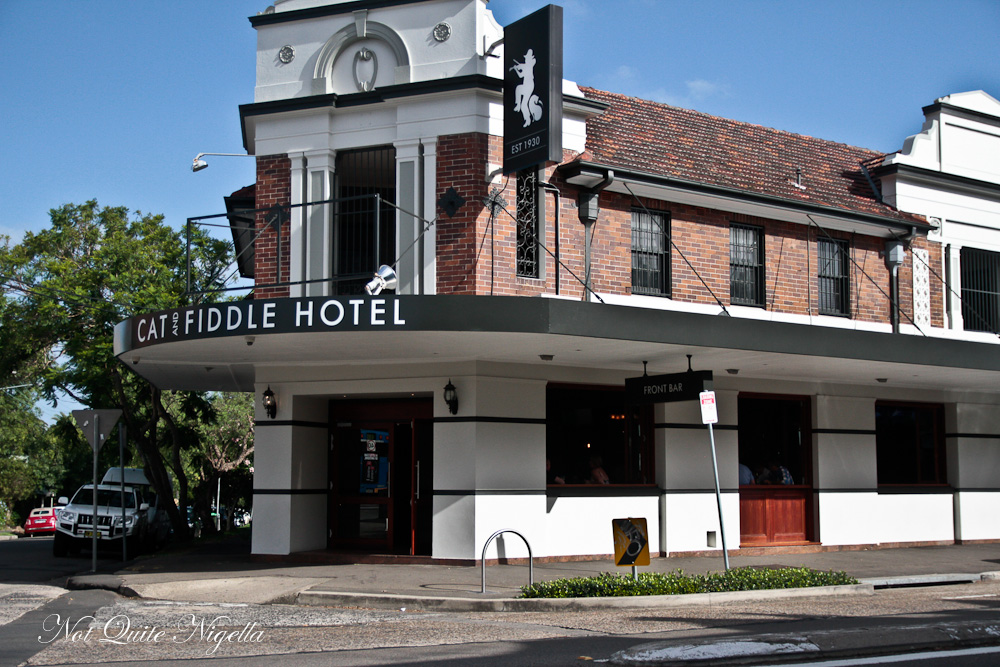 Cheffing is a trade that allows many to travel and have experiences. Some work for famous people or the very rich and you don't always know where your chef has been or who they have worked for. 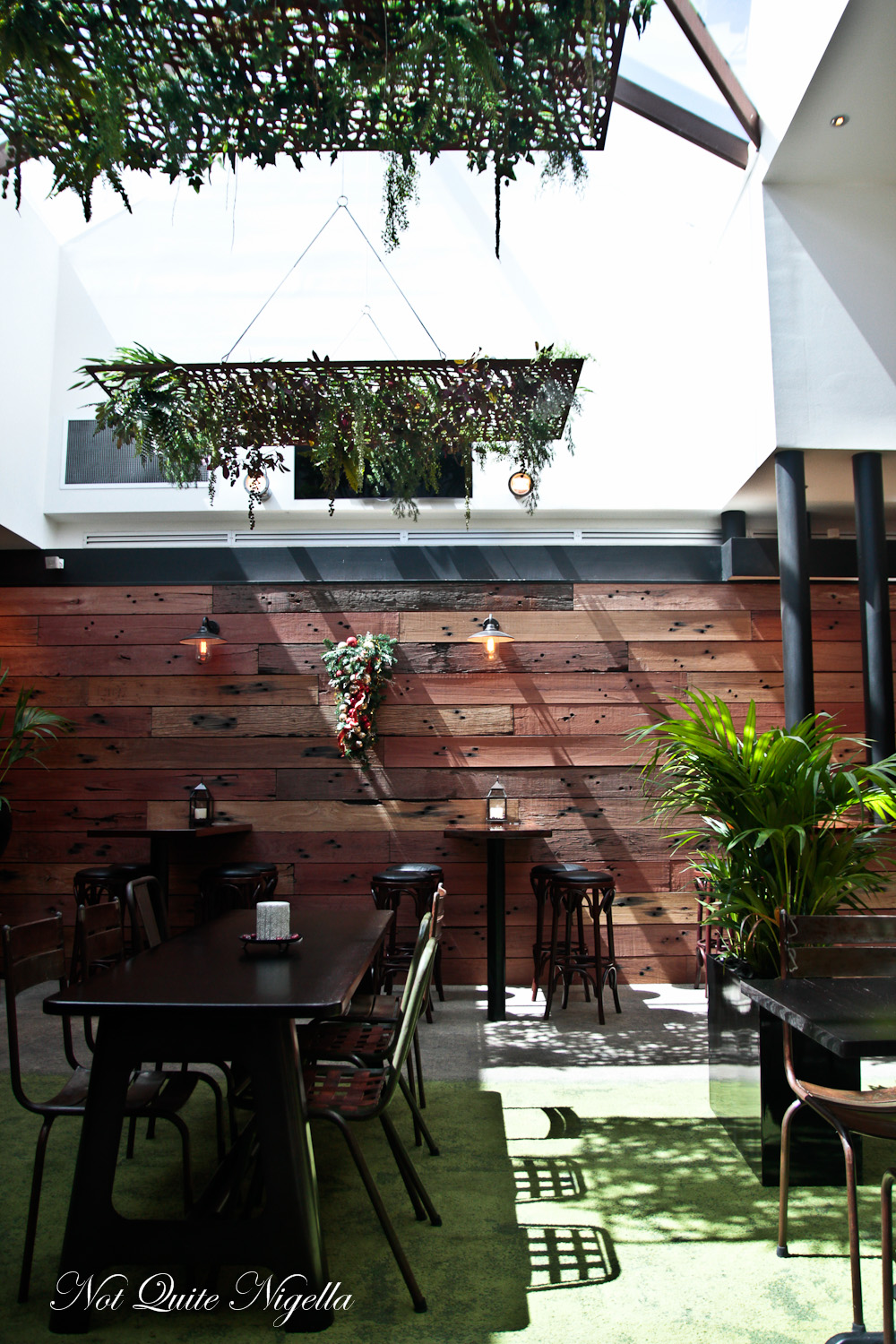 Like for example at the Cat and The Fiddle Hotel on Darling Street in Balmain. Irish born chef Padraic Kielty once worked as Woody Harrelson's personal chef. Harrelson is well known for his veganism among other natural therapies. Padraic has also collected a range of international awards as well as owning "Mad Spuds Cafe". And when it came to devising the menu for the Irish pub he has been sure to include lots of potatoes and a good vegetarian selection. 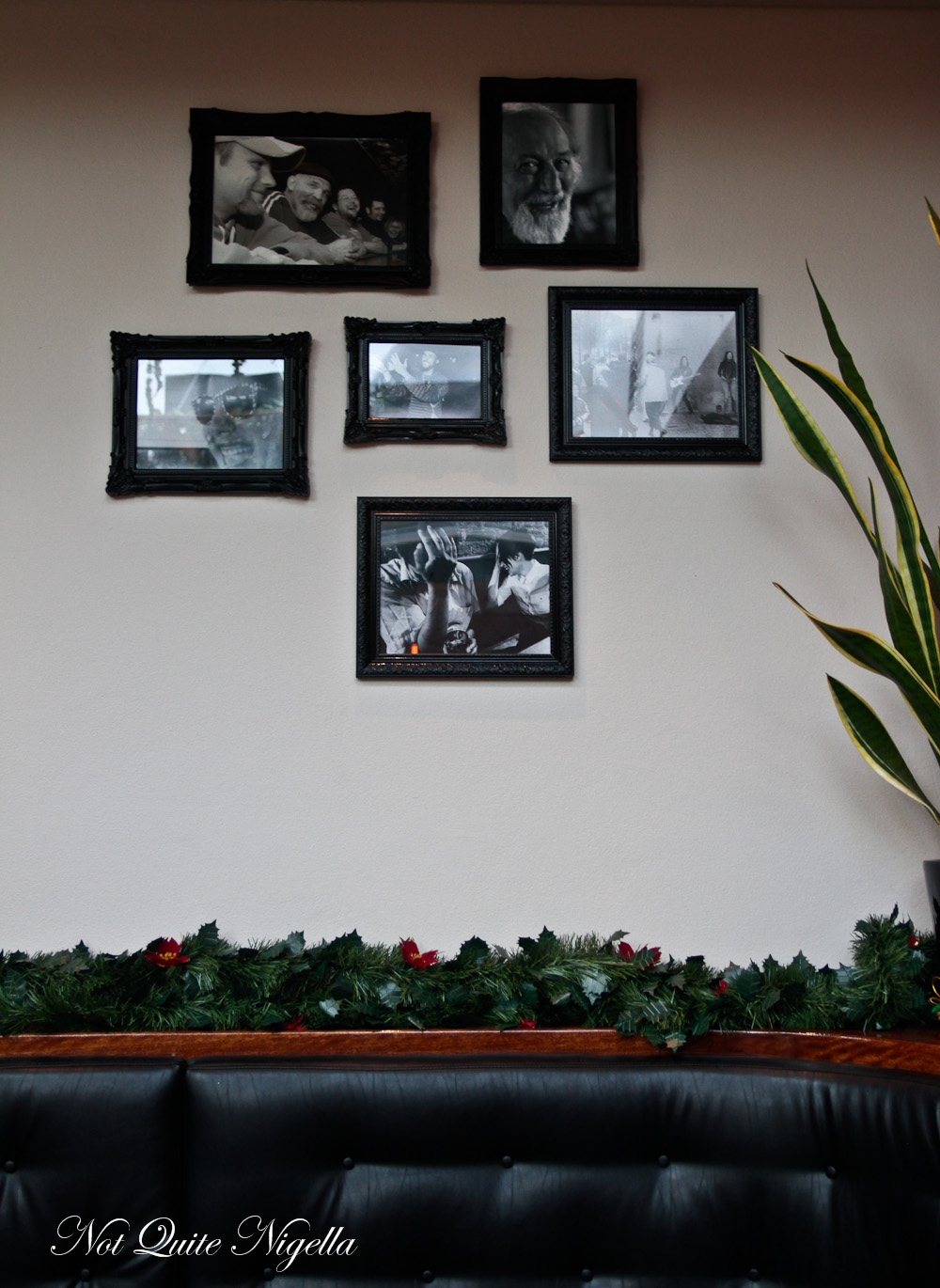 The Cat and Fiddle has undergone a recent revamp with two Irish families now owning the pub. It was originally opened in 1930 as the Star Hotel and changed to The Cat and Fiddle in the mid1970s. The 80s saw it become a live music venue for Australian bands starting out such as The Whitlams, The Waifs and Leonardo's Bride.

Nowadays, the bistro area has "moss" carpet and hanging greens and two enormous comfortable booths - we're ensconced in one of these and it's like sitting in King Kong's palm. Pictures of smiling people line the walls. We take a look at the menu and it is divided into "Usual Suspects", "Light Bites", "Veggies-Leaf" and "Chef's Specials." 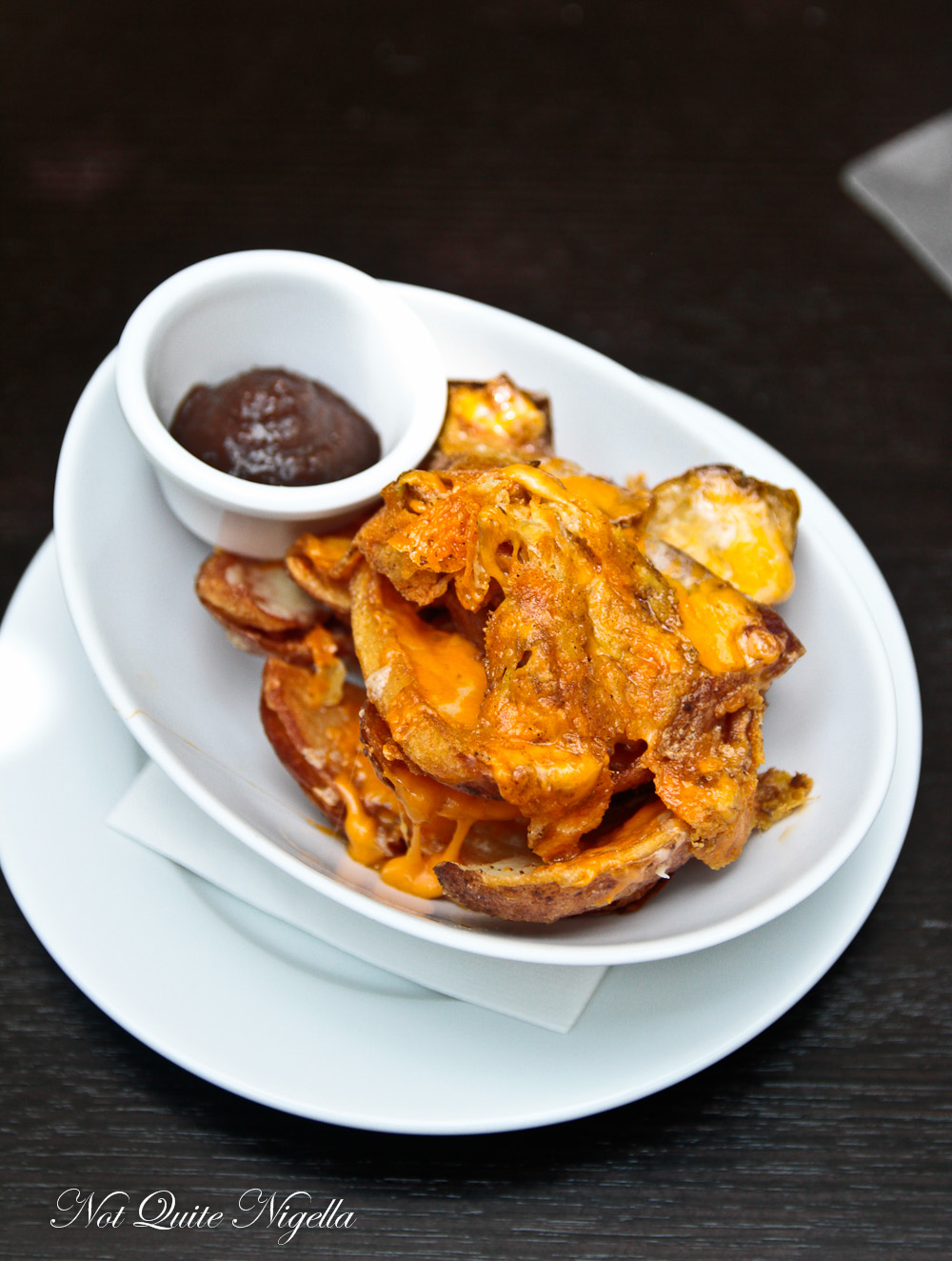 Ute's order was the crispy spud skins which were smothered with melted red Leicester cheese with a home made brown sauce chutney. They were moreish in the way that crispy potatoes often are and when you add melted cheese and the spicy chutney, it means that you go back for fourth or fifth pieces. 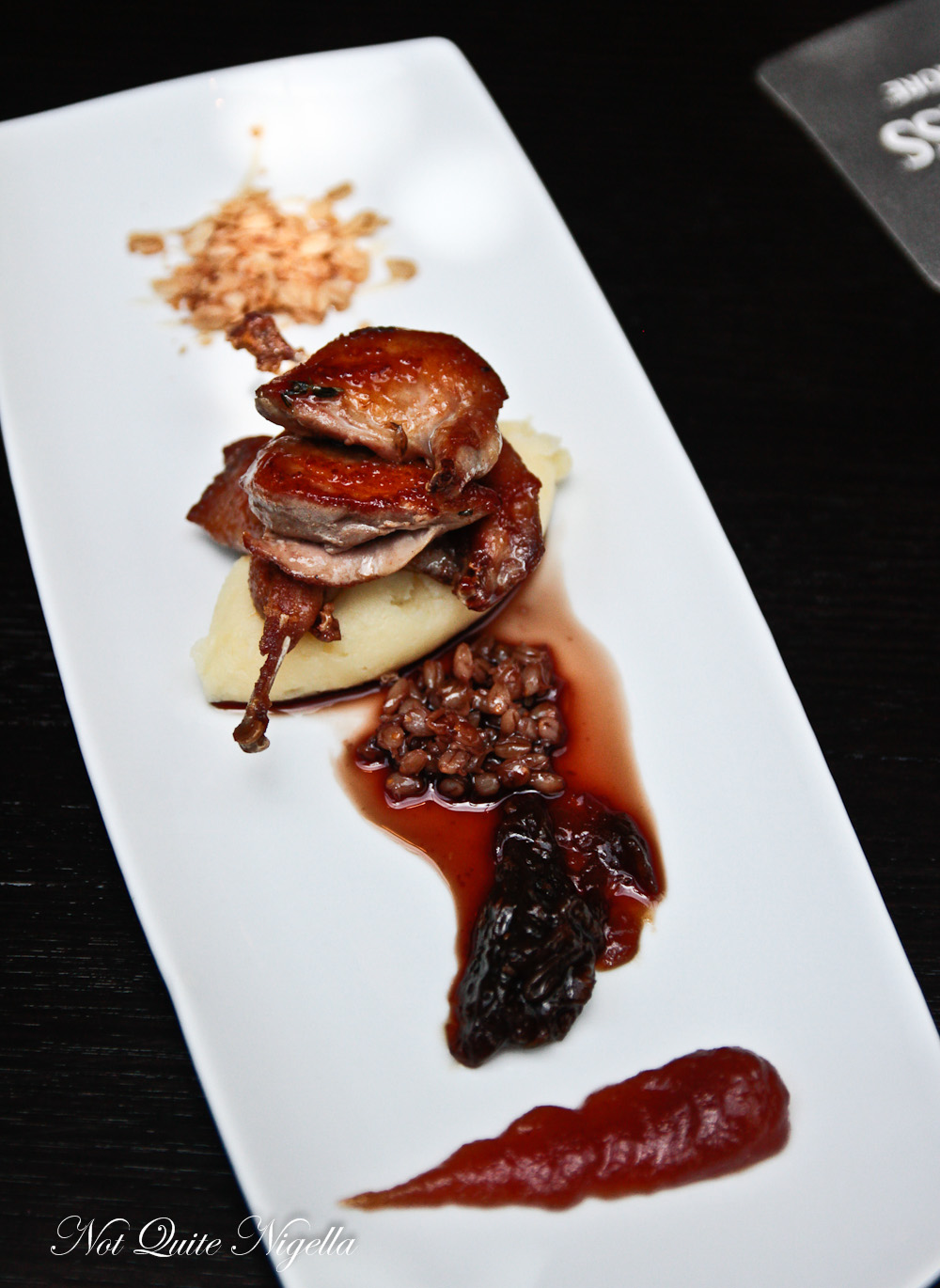 The tea cup quail is a delicate dish with jointed quail legs and breast on top of a potato puree, a side of oats, barley and caramelised tea onions on the side. The quail is succulent and the sides are on the sweet side but provide a good range of textures. 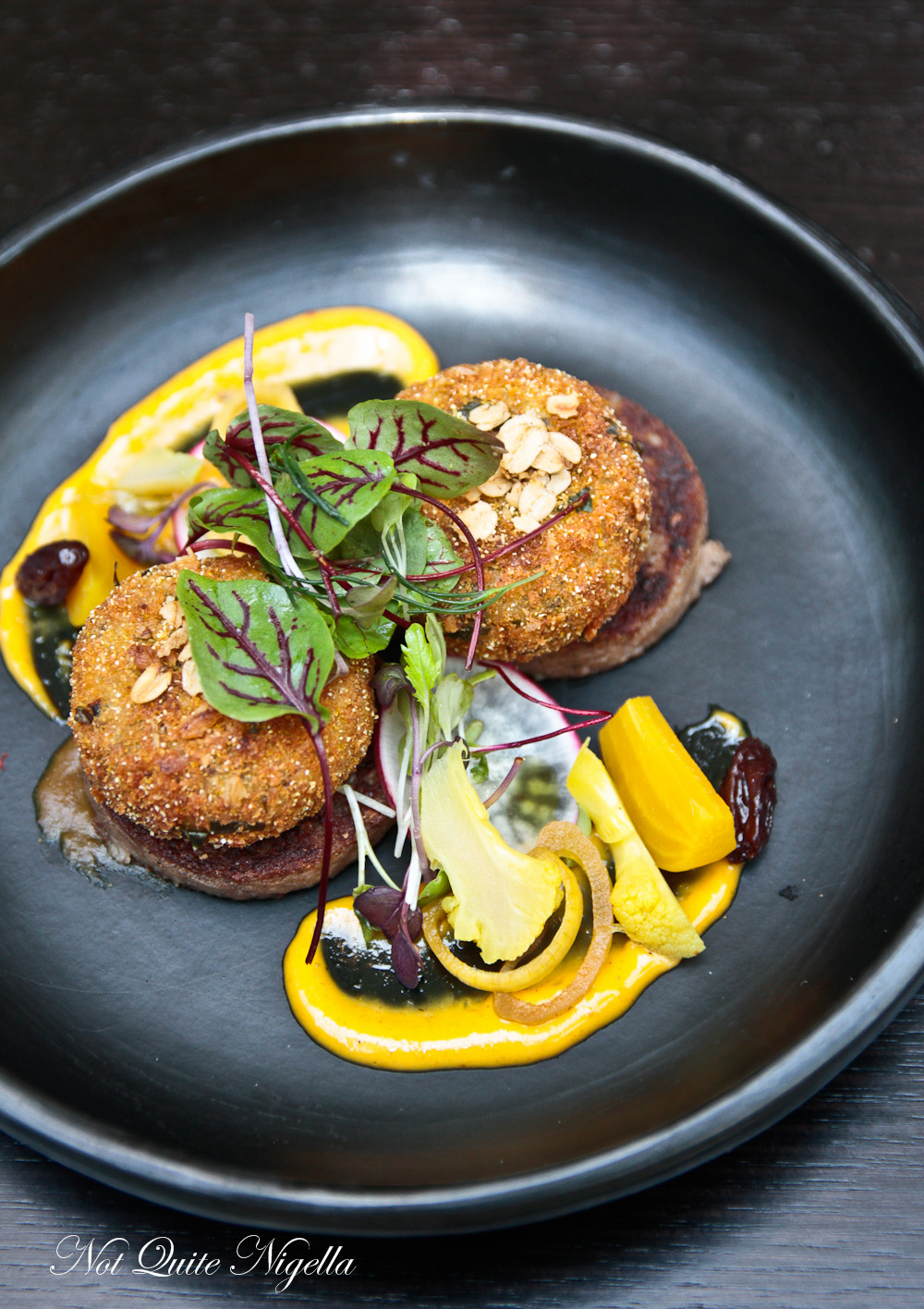 This was my choice as I was drawn in by the name. Pretty as a picture, the penny cakes are crumbed potato cakes on top of discs of white pudding with a curry sauce and pickled cauliflower, radish and raisins. I particularly liked the sauce which brought the other ingredients together. 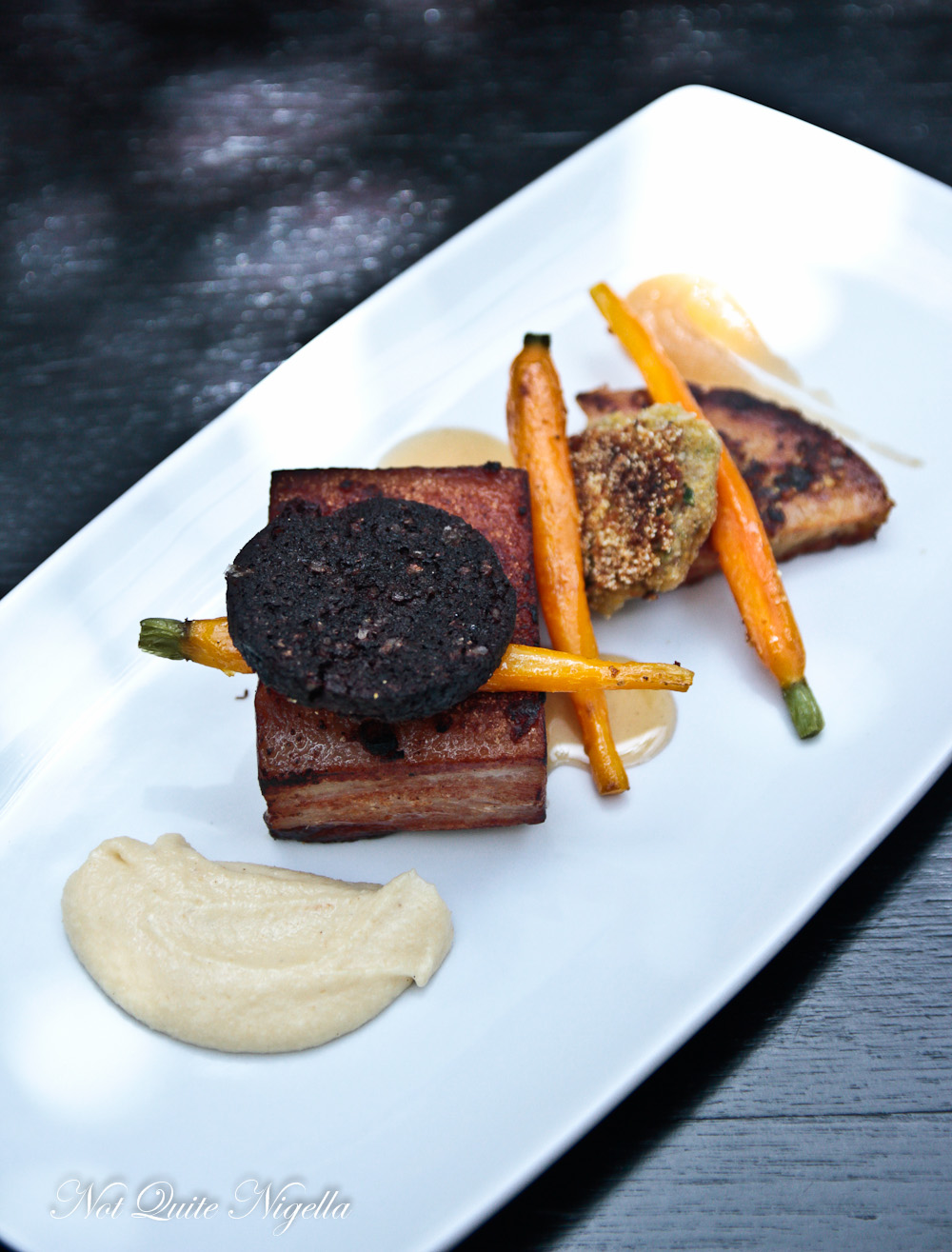 My main was the pork belly which comes as a soft and yielding rectangle of pork belly. To the side is a crubeen, a soft pork feet meatball lightly crumbed and a quarter of boxty potato pancake. Whilst it is meaty, the textures together go well and the sweetness of the apple is very good with the soft pork. 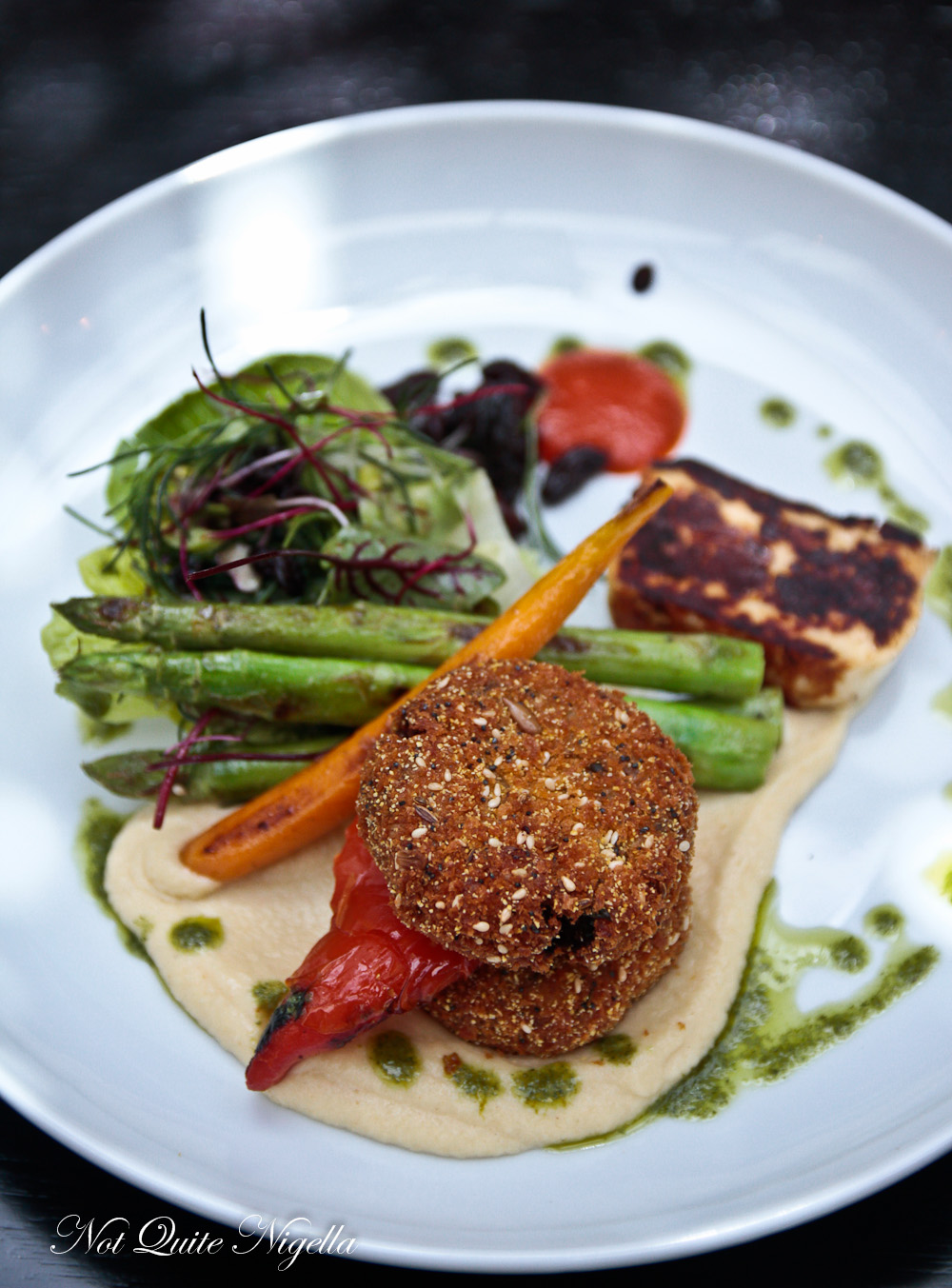 There are four vegetarian mains on the menu as well as some sides. I tried a little of Gaynor's crispy veggie cake which was like a vegetable patty with fried halloumi on the side, cauliflower puree, asparagus spears and pickled raisins. 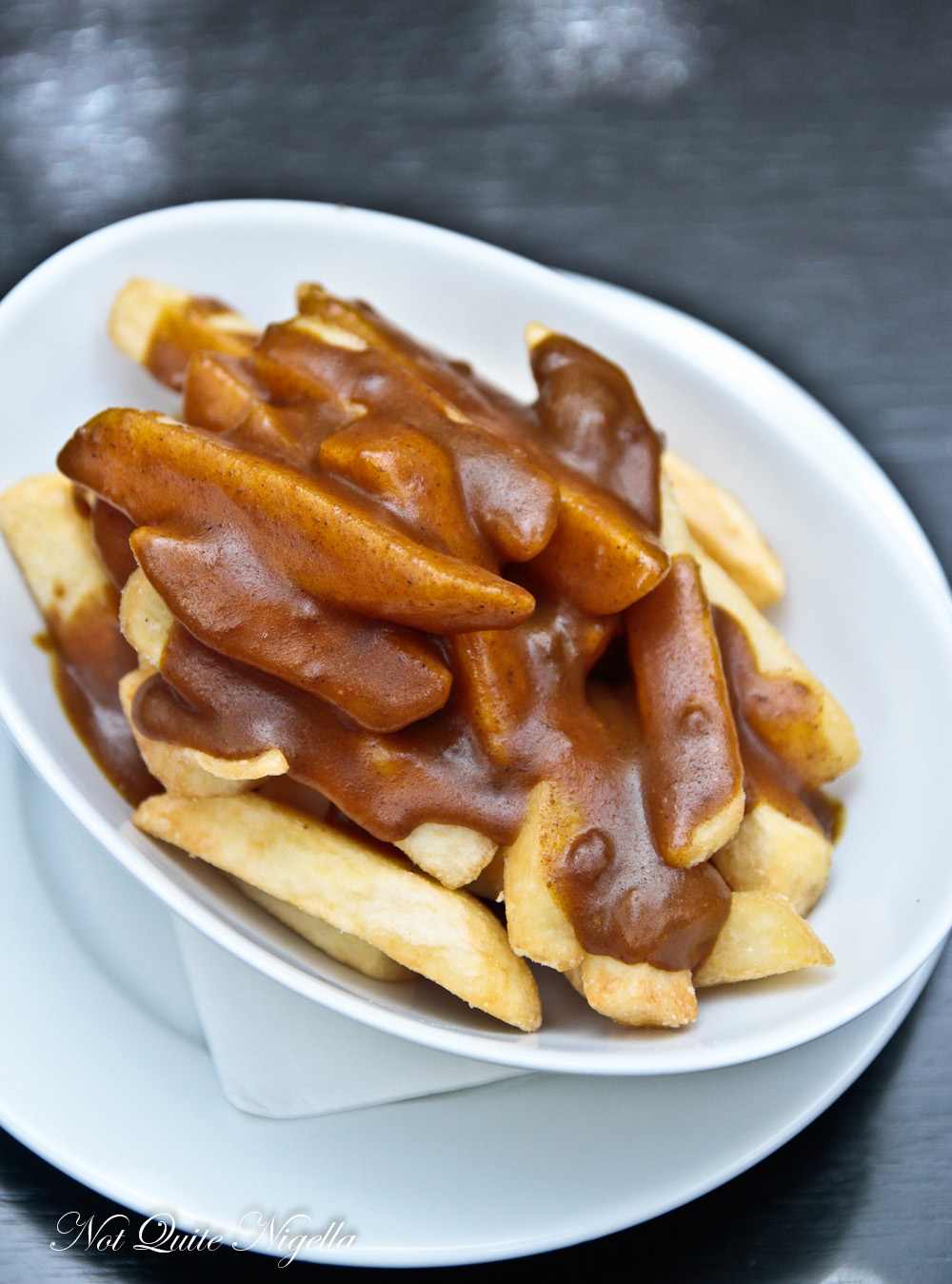 Apparently these are a popular late night snack food in Ireland in the same way that kebabs are here. They come as an enormous bowl of thick cut chips with a sweet curry sauce not too dissimilar to a Japanese curry sauce. I would have loved the chips to be crispier (those crispy spud skins would have been great) but I can see how this concept would be popular late at night. 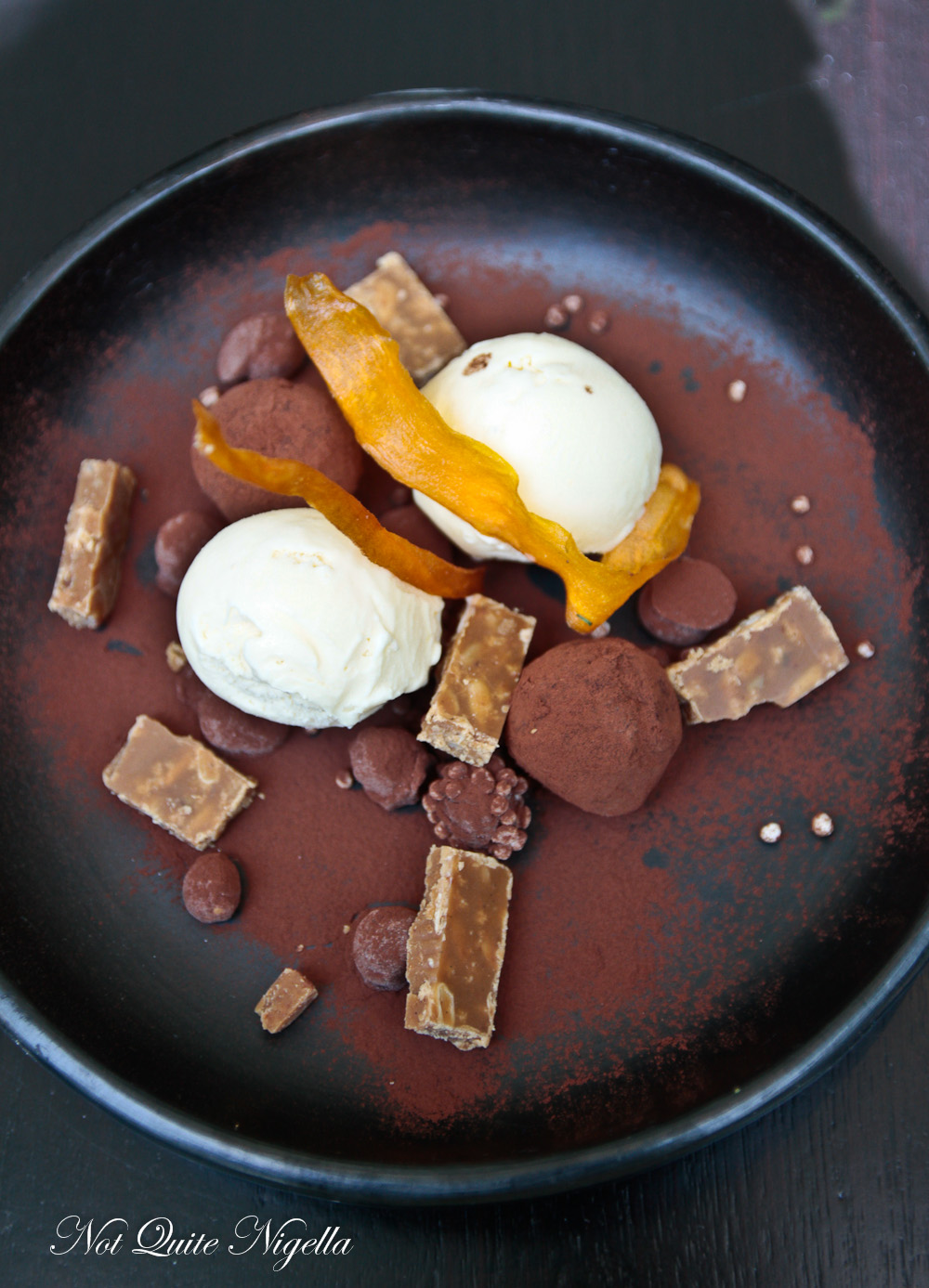 The Scottish tablet is what drew us to this dessert - Gaynor recalls her grandmother making this for her as a child and she notes that this is a more caramelised version filled with nuts. It's like an uber sugary fudge with a caramelised flavour to it. It is served with chocolate orange truffles and orange ice cream. 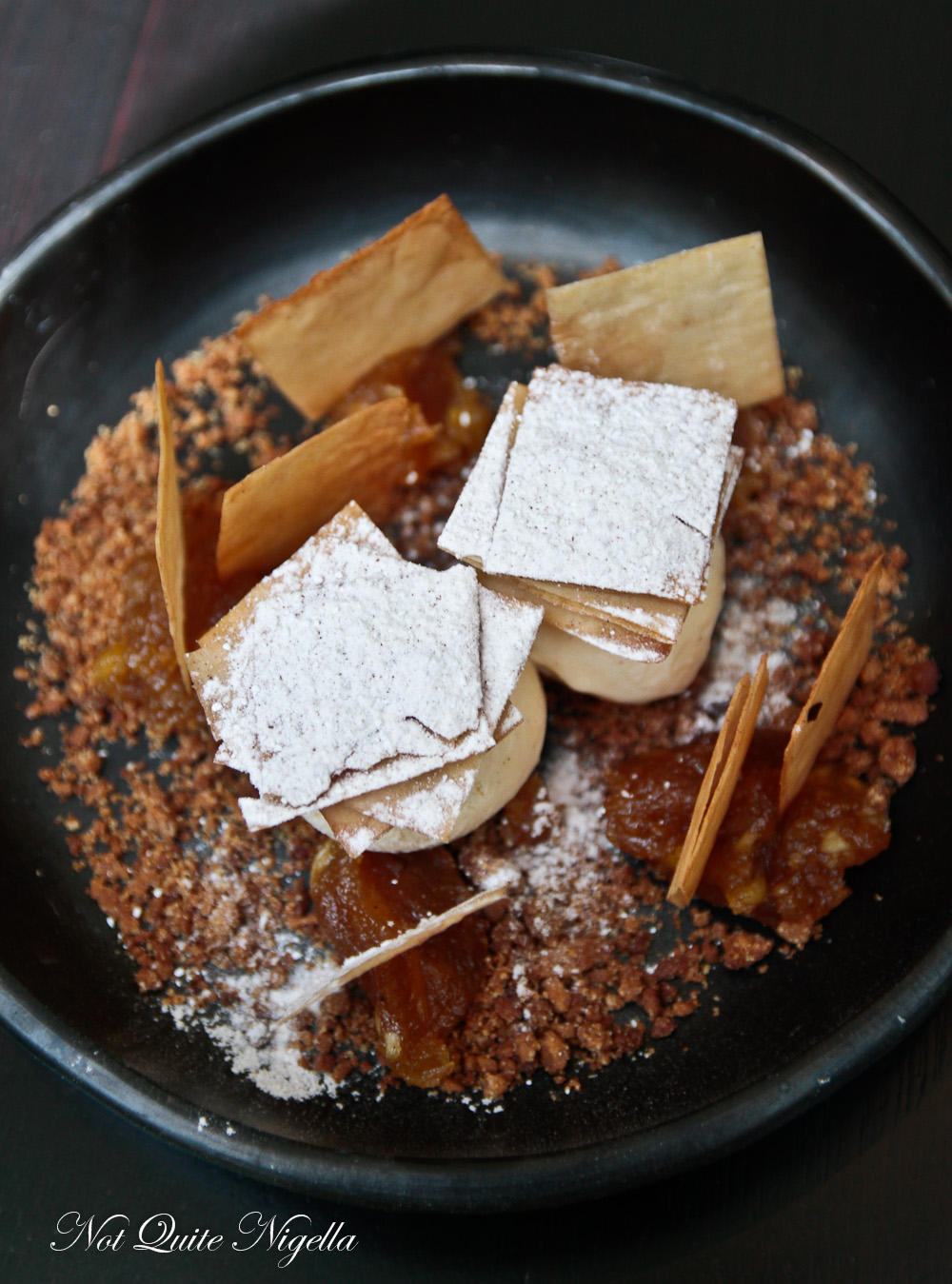 I'll admit one thing about the menu - I was slightly confused when reading things like "iced vanilla cream" which I thought to mean something unusual. It's actually vanilla ice cream with finely diced apple and fabulous crunchy rubble at the bottom. There are also thin, buttery squares of filo pastry dusted with icing sugar and the ice cream brings this dish together to give it a crunchy, creamy texture.

So tell me Dear Reader, what's your favourite late night food? And have you ever tried tablet? What do you think of it?

NQN dined as a guest of the Cat and Fiddle Hotel

The Cat and Fiddle Hotel