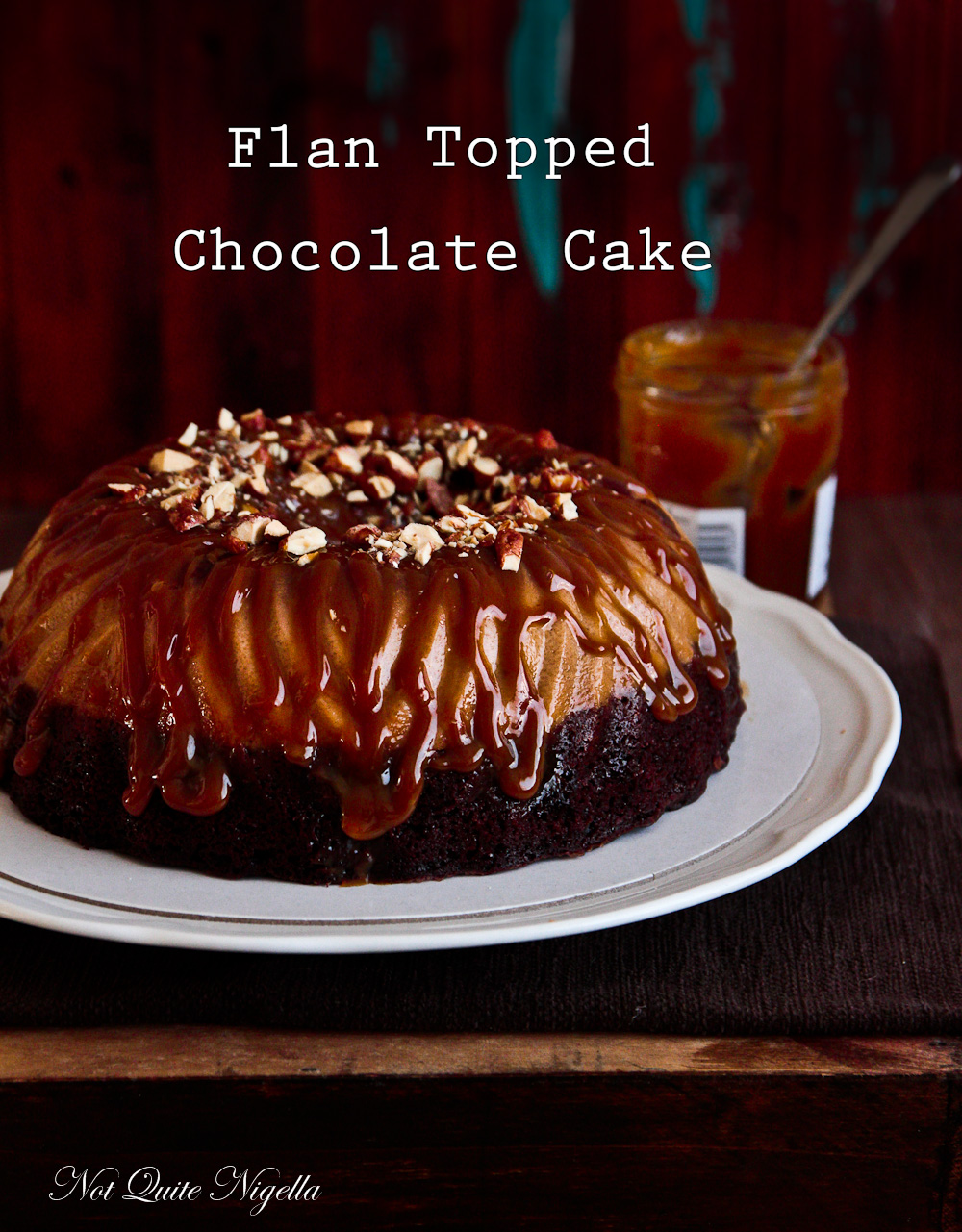 It was the usual birthday conundrum for Mr NQN and his cake making wife: what cake to bake for the man who doesn't like cake. Of all the men to marry in the world, I married the creature whose pulse remains neutral when nudged with a slice of cake.

"Don't make me anything," he said. Which of course my cake obsessed mind reads as "Find me a cake, bake it and change my mind about cake" challenge. I mulled it over for weeks. Two things that Mr NQN loves are fruit and jelly or custard. I think a trifle without sponge is his ideal partner. And it was when I was editing my story on our visit to Houston, Texas that it struck me. Belinda and I had travelled to Houston to try a flan or creme caramel topped chocolate cake. It was not in our destiny however as it wasn't on the menu that day. But perhaps I could make it for Mr NQN's birthday! 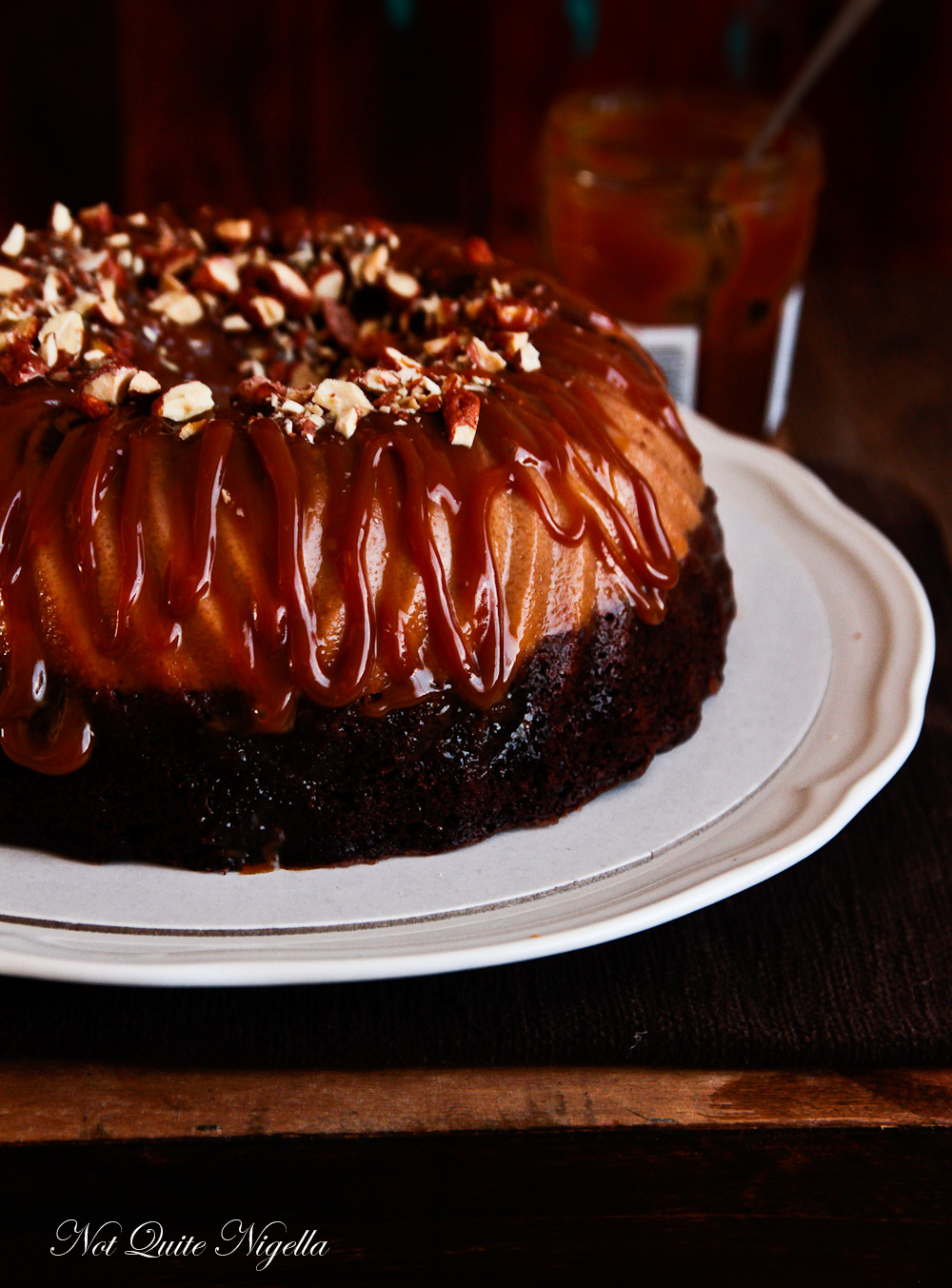 I have shown up with jelly cakes before but they are hugely problematic to transport and really just for the daft (me) or those that are looking to film an elaborate physical joke. But this would solve any problem as it has a chocolate cake base.

The genius thing about this cake is that it is actually really easy to make. I know that I have said that about macarons but really, I mean it. The trick is that the cake separates based on the weights of the two mixtures. The flan part is a cinch - just put four eggs, mascarpone and two tins of milk in a food processor and blend for about 30 seconds. That's it. Over.

For the chocolate base I used one of my simplest cake recipes, the vegan chocolate cake recipe which is just adding everything into a bowl and mixing with a spatula. You pour both batters into a bundt tin together and through the magic of baking they separate into two layers. And now here's when things get really strange. I thought that it was genius being able to serve the top and bottom to regular diners and just the bottom to the vegans but when I was describing the whole process of making the cake to the guests at dinner, Mr NQN could not stop laughing because he saw it as a non-vegan cake whereas I thought it was a vegan cake. "But it separated!" I cried out later when he brought it up. "Not entirely," he warned. "I'm sure bits of egg got into the batter." "But one of them had seconds even after knowing how it was made!" I said, disheartened. 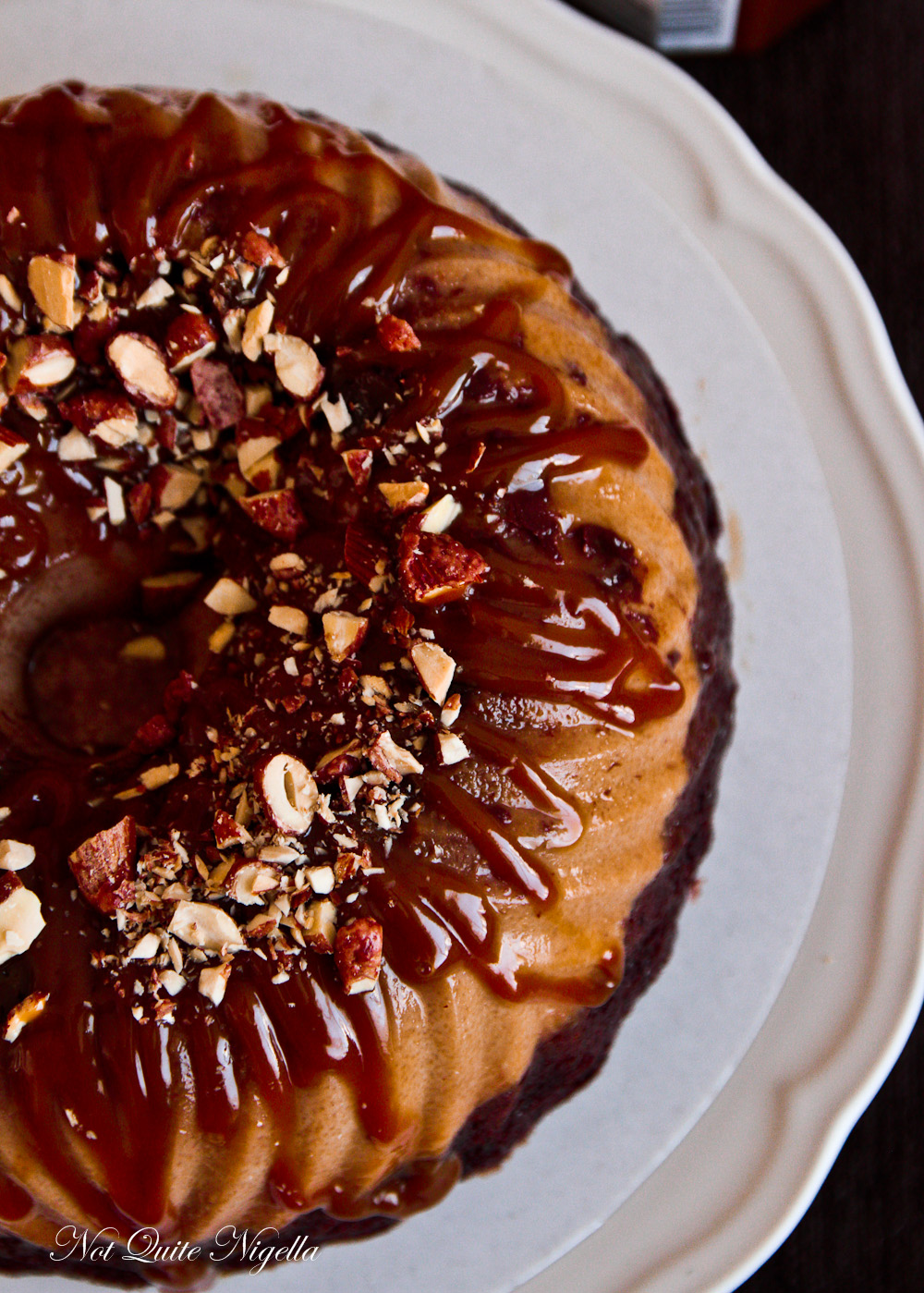 Well I may never get the hang of veganism and perhaps on reflection it wasn't such a great idea but as for everyone else, they loved the cake as it really is the best of both worlds with a wobbly caramel custard on top and a rich chocolate cake on the bottom.

So tell me Dear Reader, was it vegan or non vegan? I suspect I can guess your answer but I had better ask. And have you ever tried to do something nice but it has failed? 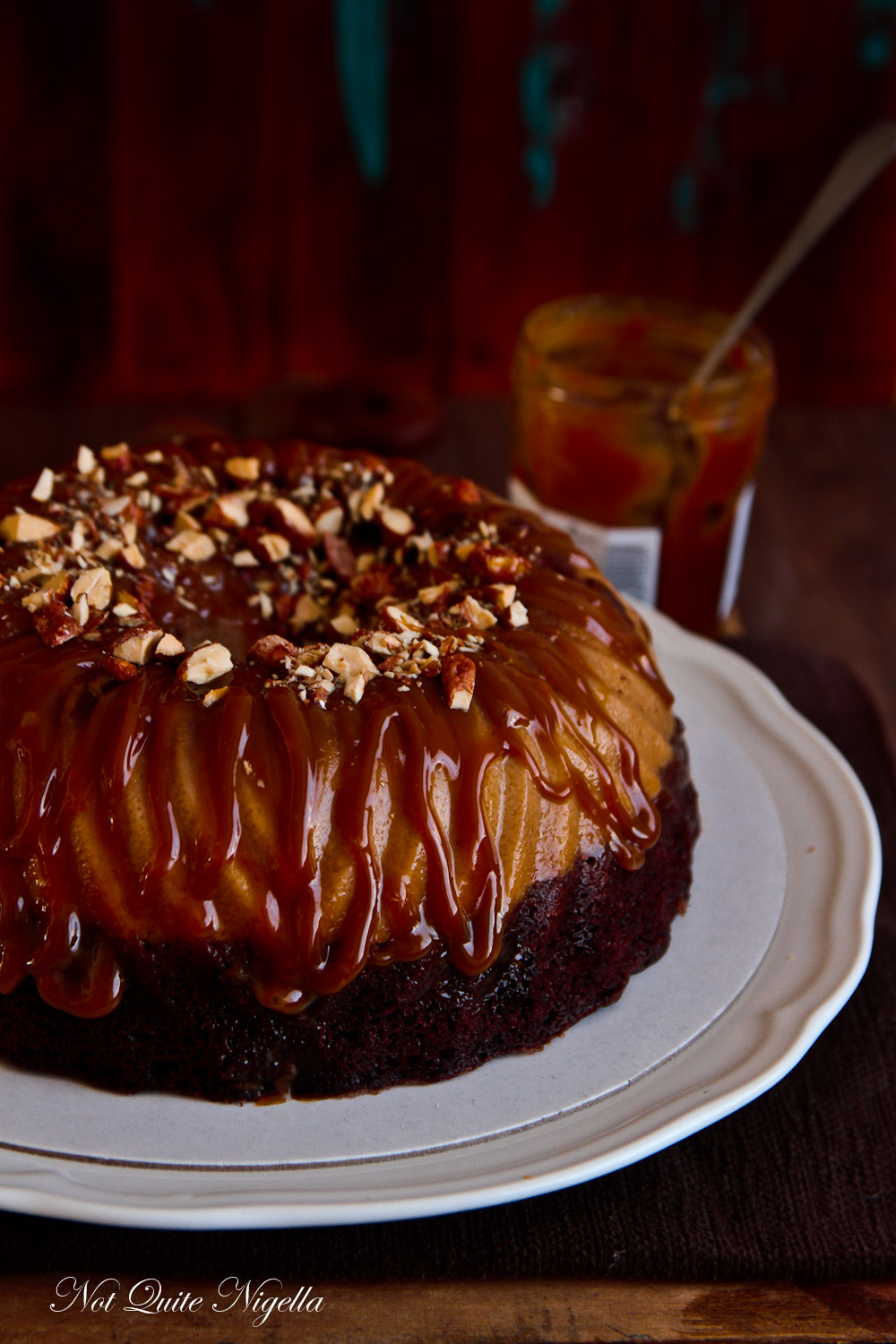 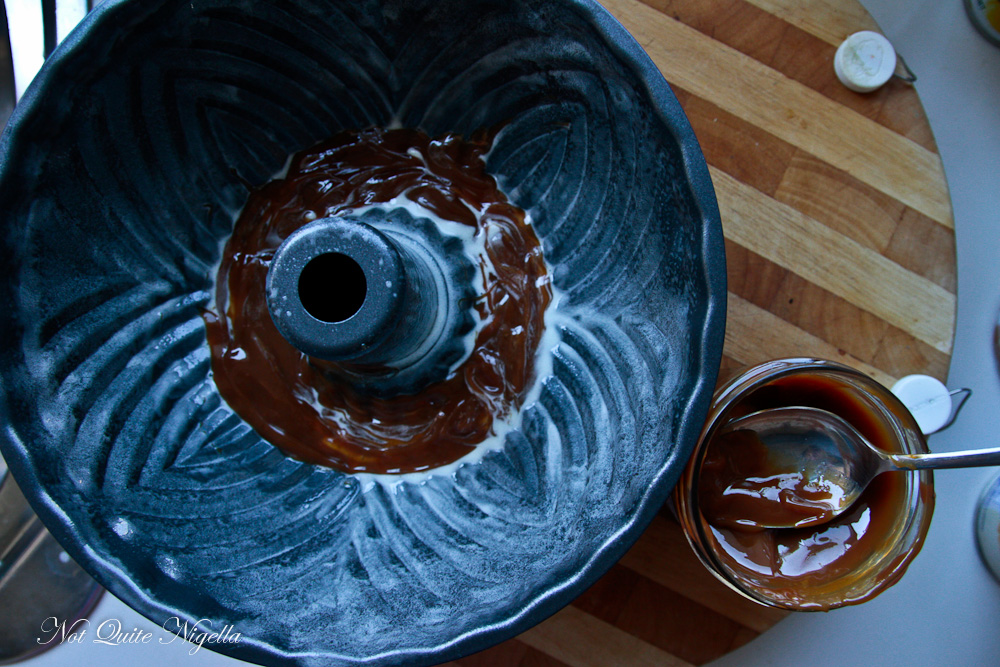 Step 1 - Preheat the oven to 180C/350F and put a kettle full of water onto the boil. Have a large tray that can fit the bundt tin in - this is for a water bath. Spray the inside of a bundt tin with non stick spray and spread 1/4 cup of the caramel on the base of the tin. 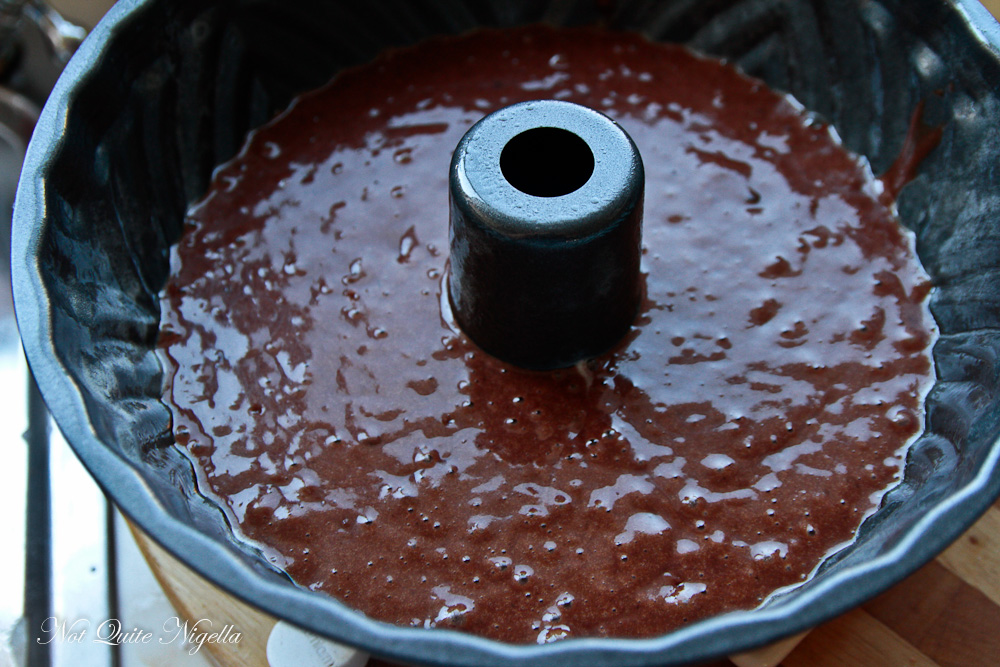 Filled with the chocolate cake mixture

*Step 2 - *Place the flour, sugar, cocoa, bi carb and salt in a bowl and whisk to combine. In a jug whisk the water, oil, vinegar and vanilla and add to the dry mix. Fold to combine well. Pour this into the caramel lined tin. 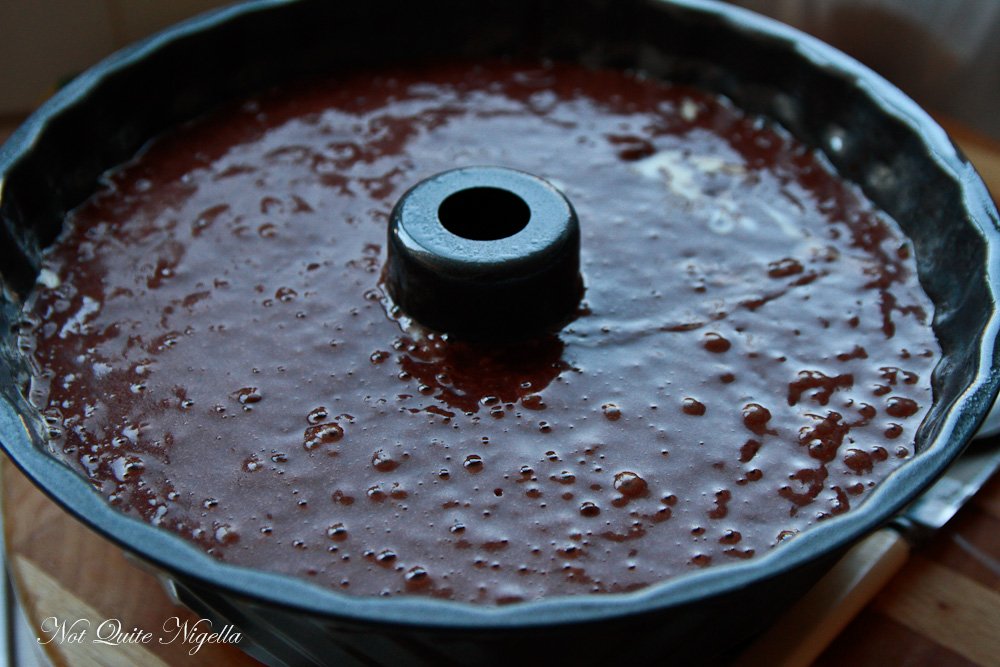 Then with the flan mixture added

Step 3 - In a blender or food processor, process the sweetened condensed milk, evaporated milk, eggs and mascarpone until smooth. Pour into the tin -the two mixes will look like they have combined but the two batters will separate when baking. Spray a sheet of foil with oil and cover the top of the tin with the foil.

Step 4 - Place the bundt tin in the larger tin and pour the water around the bundt tin so that there is an inch of hot water. This cooks the cake gently. Bake for 1 hour until a skewer inserted into the chocolate cake comes out clean. Remove from the water bath and cool at room temperature. This is usually served cold the next day but you can upturn this once cooled. Clamp a large serving plate under the bundt tin and gently wiggle it out of the tin.