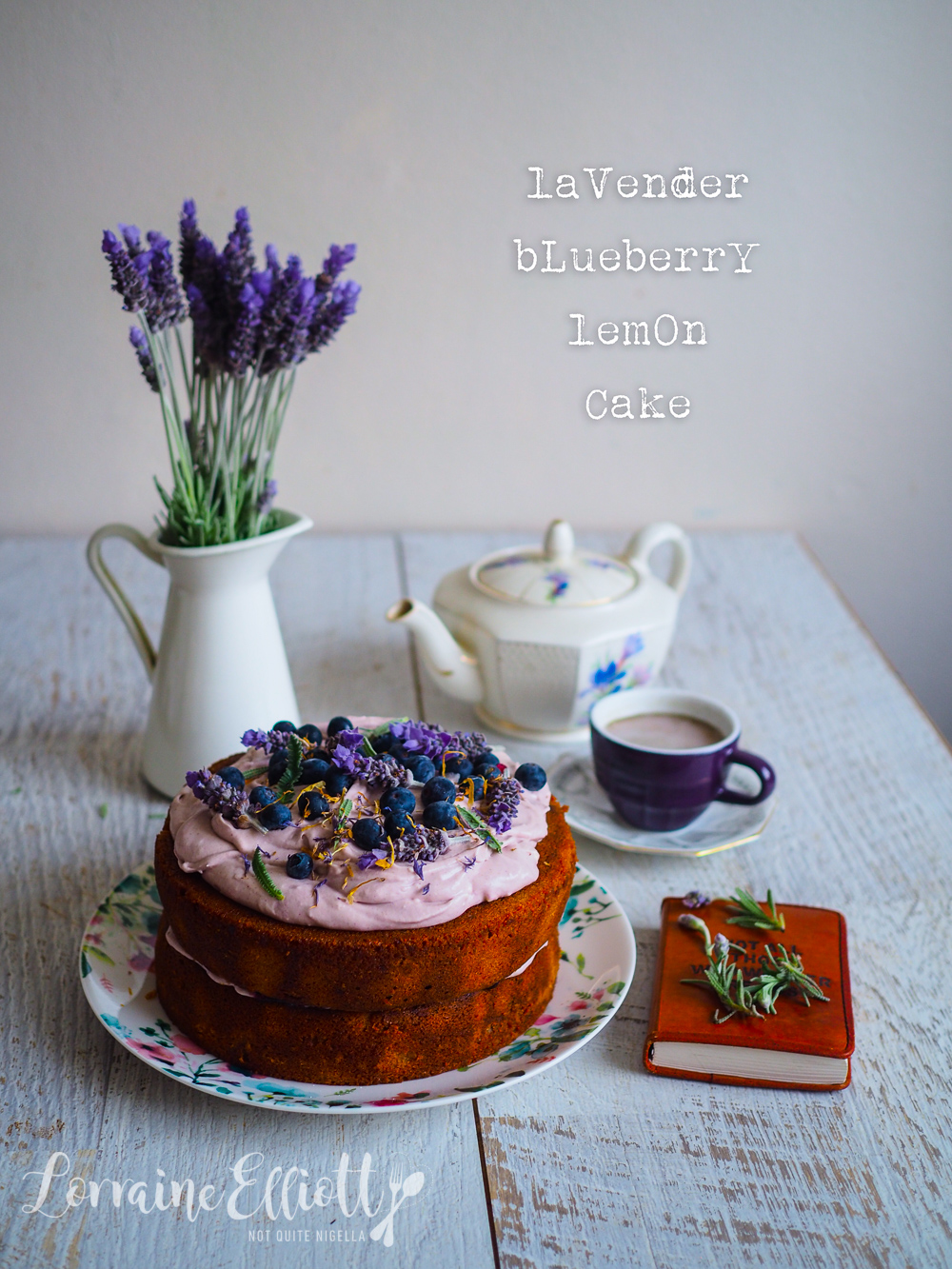 _This lavender, blueberry and lemon cake is the perfect cake to have in the afternoon with a cup of tea or coffee. But this spectacular cake also happens to be gluten free as well as hiding a host of superfoods and a special ingredient and trick to make it super moist. This cake is layered with a delicious lavender whipped mascarpone cream, blueberry jam and fresh blueberries. If you love floral cakes or want a cake to impress, this is a pushy recipe Dear Reader! I called her Lauren. _ 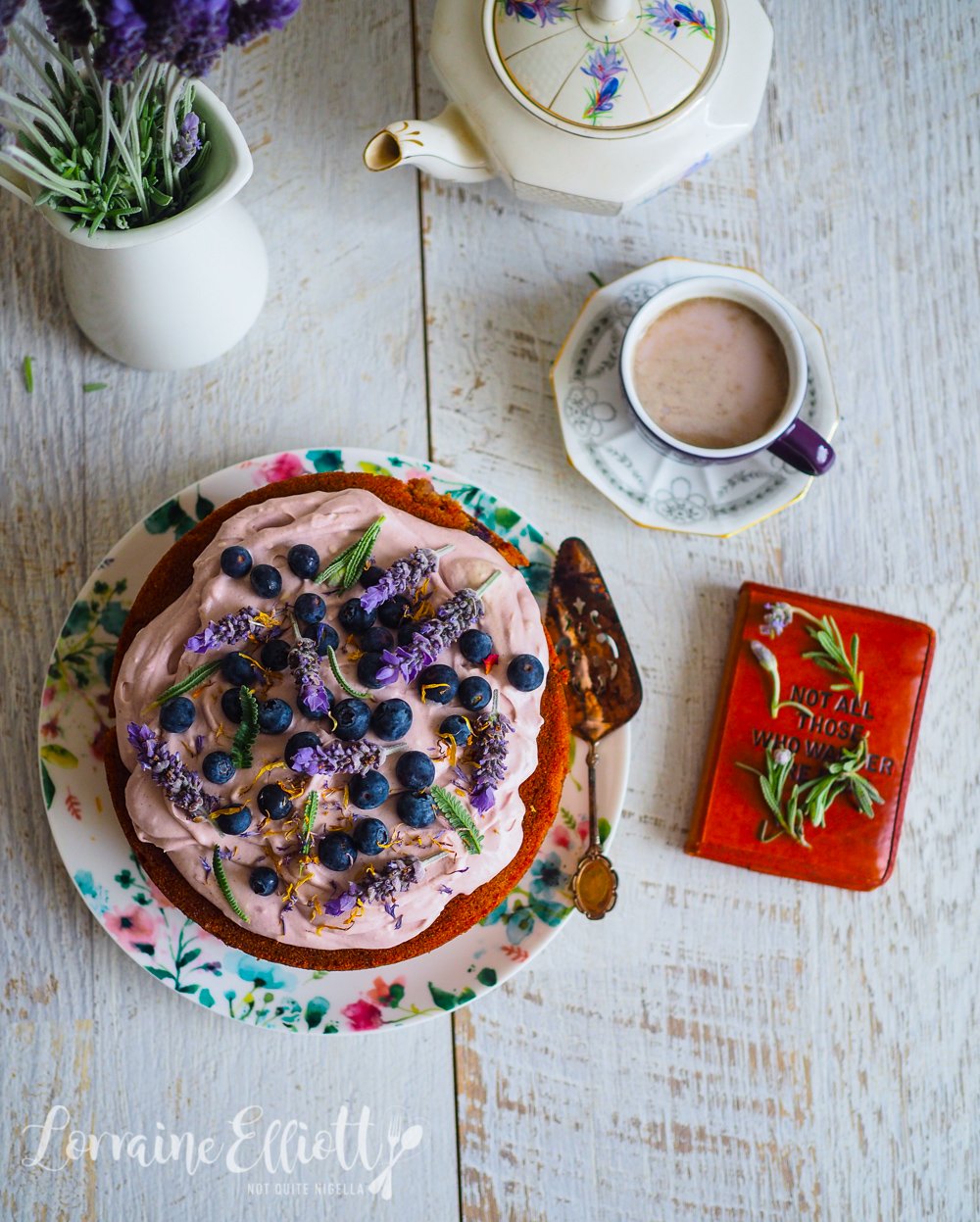 I wasn't sure how this cake would turn out. When Woolworths asked me to create a recipe using their Woolworths Macro Lavender Latte powder I bought two packets in case it didn't work out and I had to make a few attempts because not only was I developing a gluten free cake recipe but it was also one with an unusual ingredient. It was sparked by a comment from a friend of mine that got me thinking. She had tried a cake made with potato in it and raved about the texture. Keen bakers will know that bread made with mashed potato has a wonderful texture to it but cake? I had to try it.

I baked it, filled it and then cut it to try it. The texture was like a syrup cake. I've never actually had a cake that tastes like a syrup cake without adding extra syrup. Perhaps the closest is the Middle Eastern Orange Cake with its lovely moist crumb. It was heavenly. 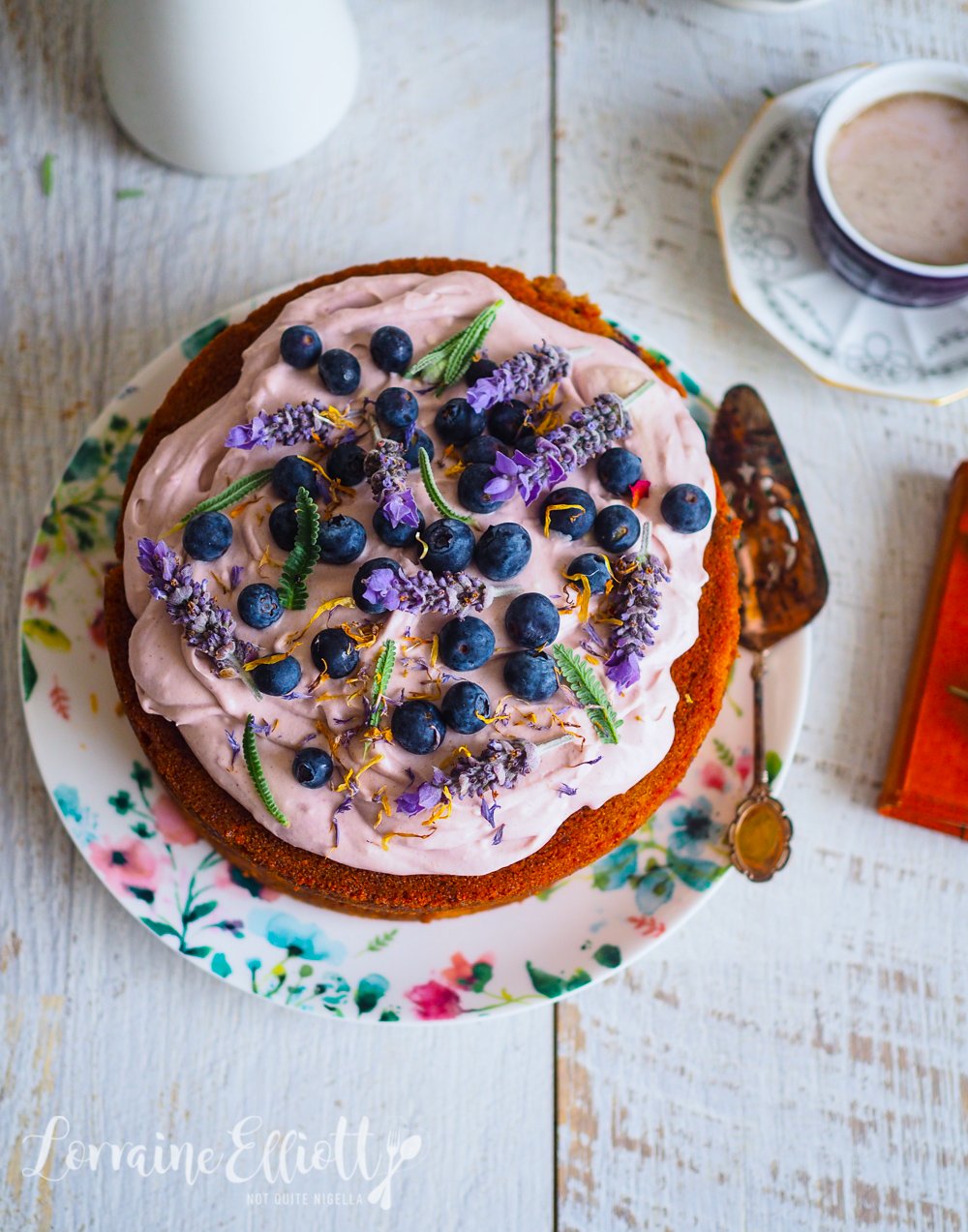 Lavender is of course great for calming and a lavender latte is a great idea for anyone caffeine sensitive that also wants to enjoy a hot beverage. It is also used as a pick-me-up. 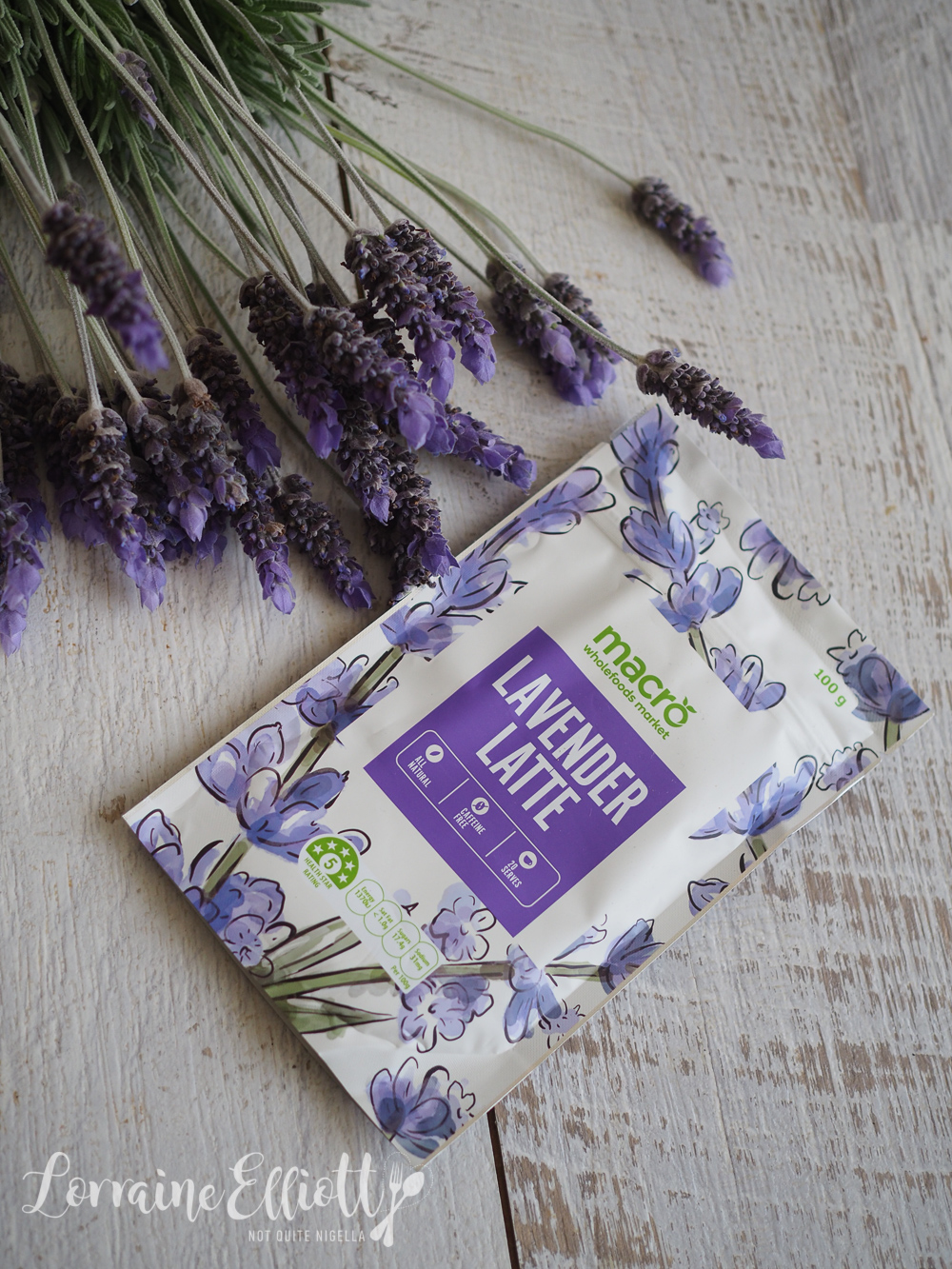 I know that your first question is probably "Does this taste soapy?" but it doesn't I promise. This lavender latte mix actually doesn't remind me of soap at all and also has superfoods maca (the top ingredient), chicory fibre, lucuma powder (a delicious Peruvian fruit), blueberry powder, lavender flower powder, natural flavouring, chamomile flower powder and cherry powder only so it's a delicious fruity blend. If anything it tastes like fruit and coconut to me. Macro also have in their range matcha powder and sweet potato powder available too. 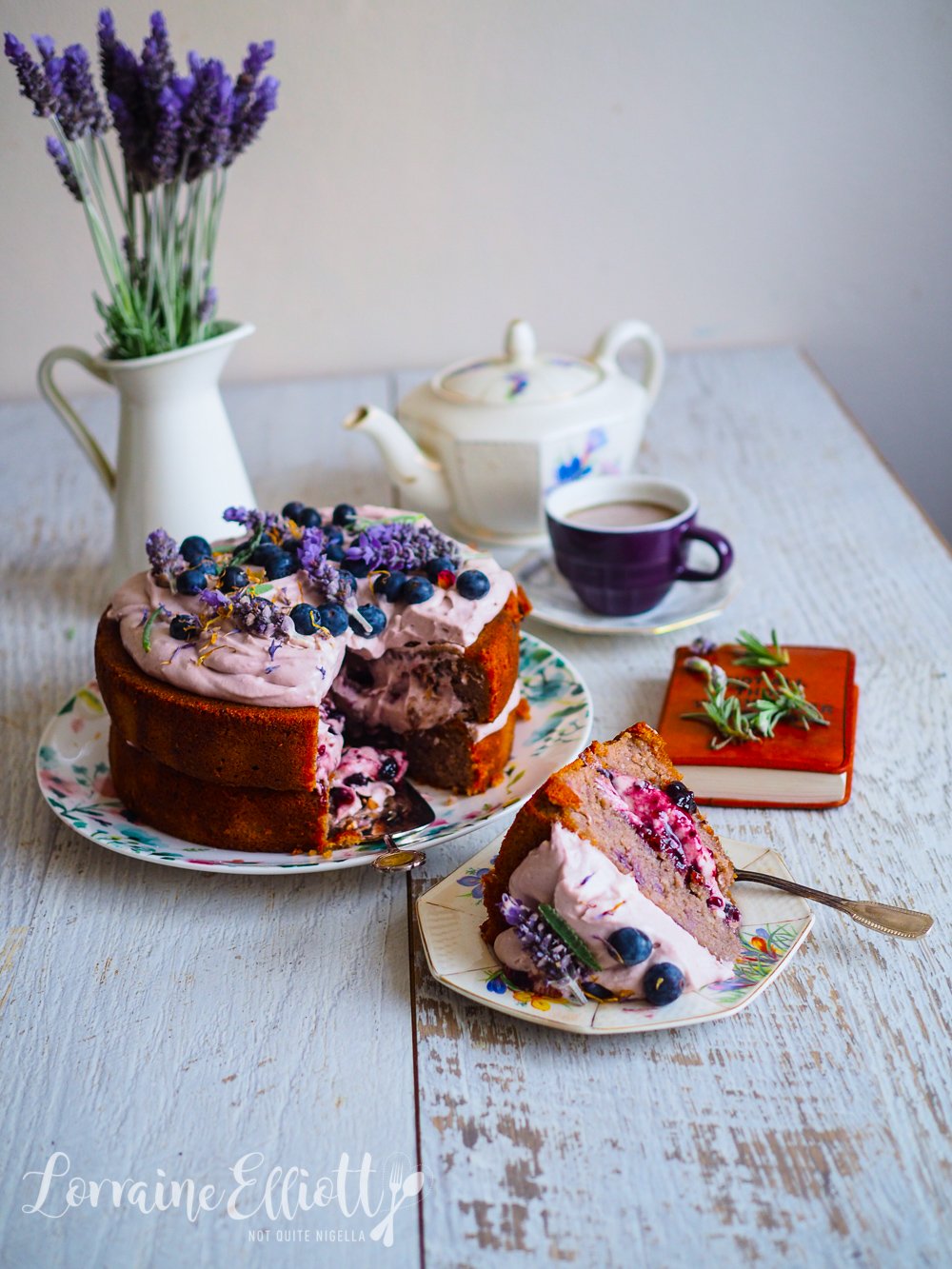 While I was away recently Mr NQN drank a lot of lavender lattes because they were so easy to make as I left the powder for him as I had so much of it. He also got up to a bit of mischief too. You see Nina and Garth were overseas on holiday and they had her mother Karin looking after their enormous, sweet but very energetic dog Marley which is no small task.

Mr NQN was asked to take Marley out for walks on the weekend while they would cover the weekdays. He loves Marley so he was happy to but walking Marley is vastly different from walking Teddy or Mochi. He sympathised with Karin walking Marley as she was exhausted. One day he stayed to chat with Karin for a bit and it was then that he suggested the idea of pranking Nina and Garth. 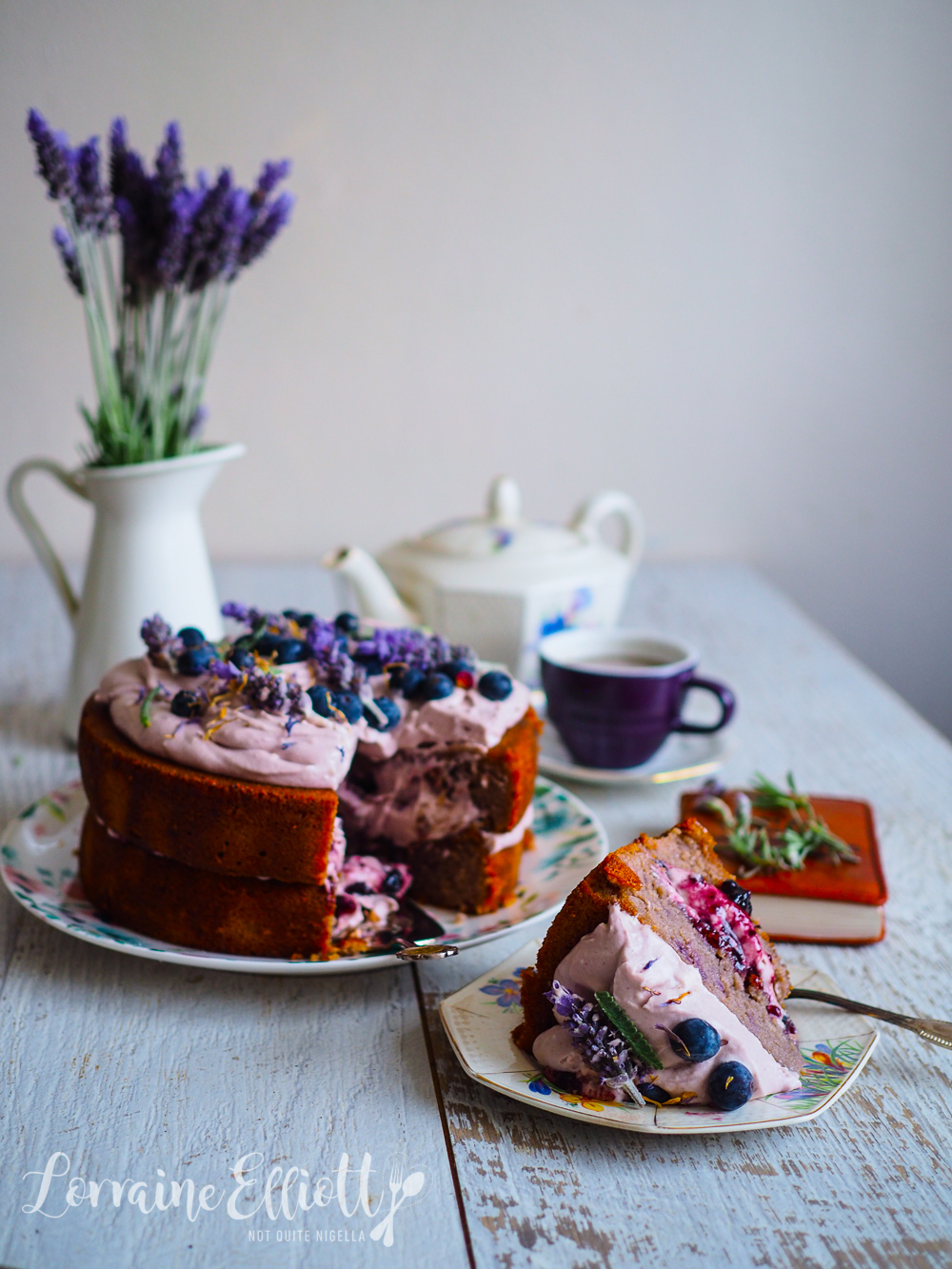 A few days before they arrived back from overseas he printed off 50 photocopies of pictures of Tommy Wiseau. For those of you that don't know him, he is the star, director and producer of "The Room", considered the worst movie ever made. He wanted to wallpaper their car with pictures of Tommy (we all watched The Room together). 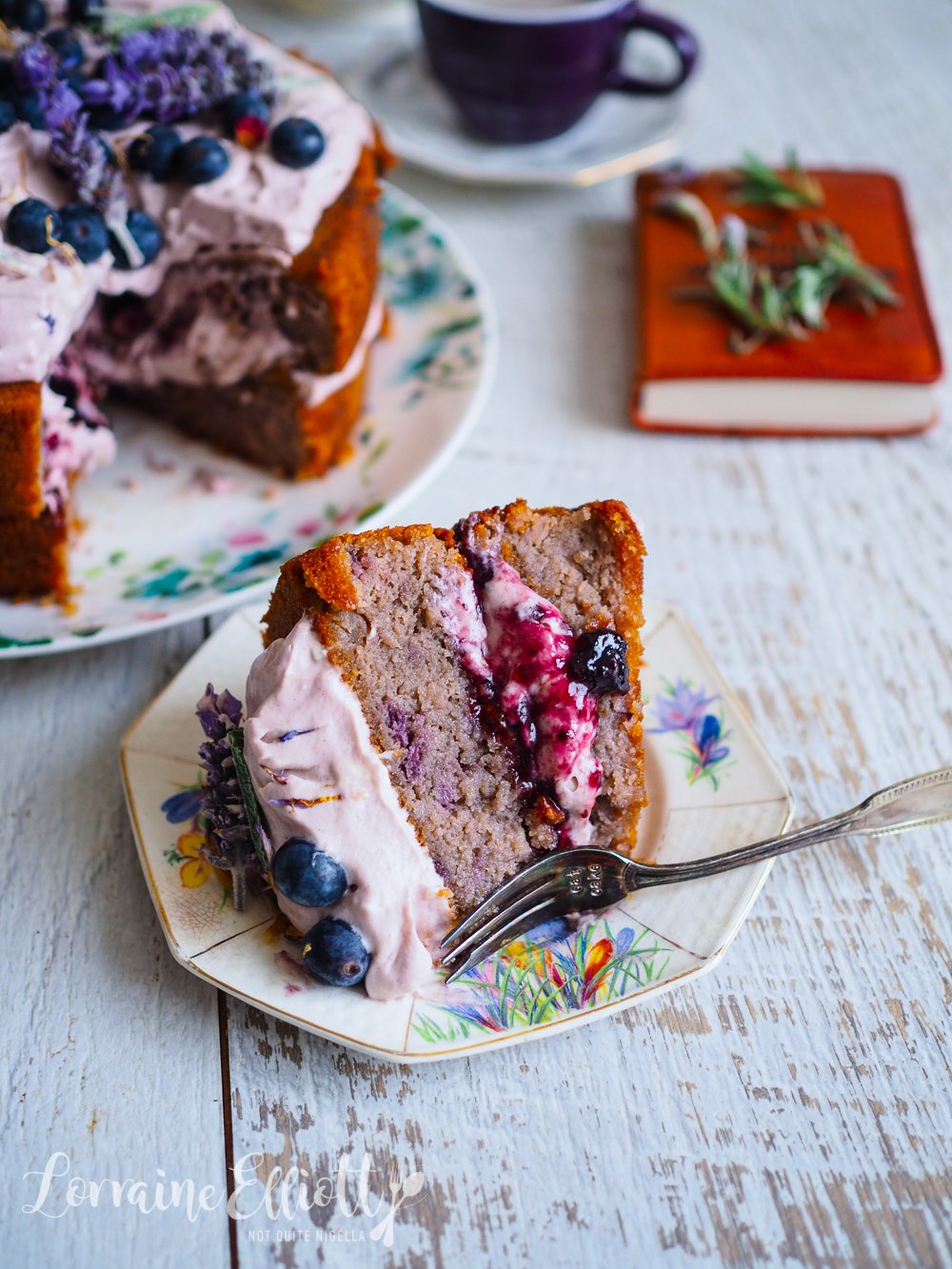 Mr NQN is more subtle than me. If I were doing it, I would have covered their dashboard and steering wheel with pictures. Instead he put up a few in the car but then hid them in places like the glove box and the sunroof. Karin finished off the job by wrapping their steering wheel and papering their room. "It's the gift that keeps giving," he said.

How to Make a Lavender Latte Cake video

The morning after they arrived back they found the print outs and for the next week they discovered the others. He was delighted every time he got a message from them with a picture of Tommy that he had found. I guess that's his way of fun and relaxing!

So tell me Dear Reader, how do you relax? Have you ever had a lavender latte? 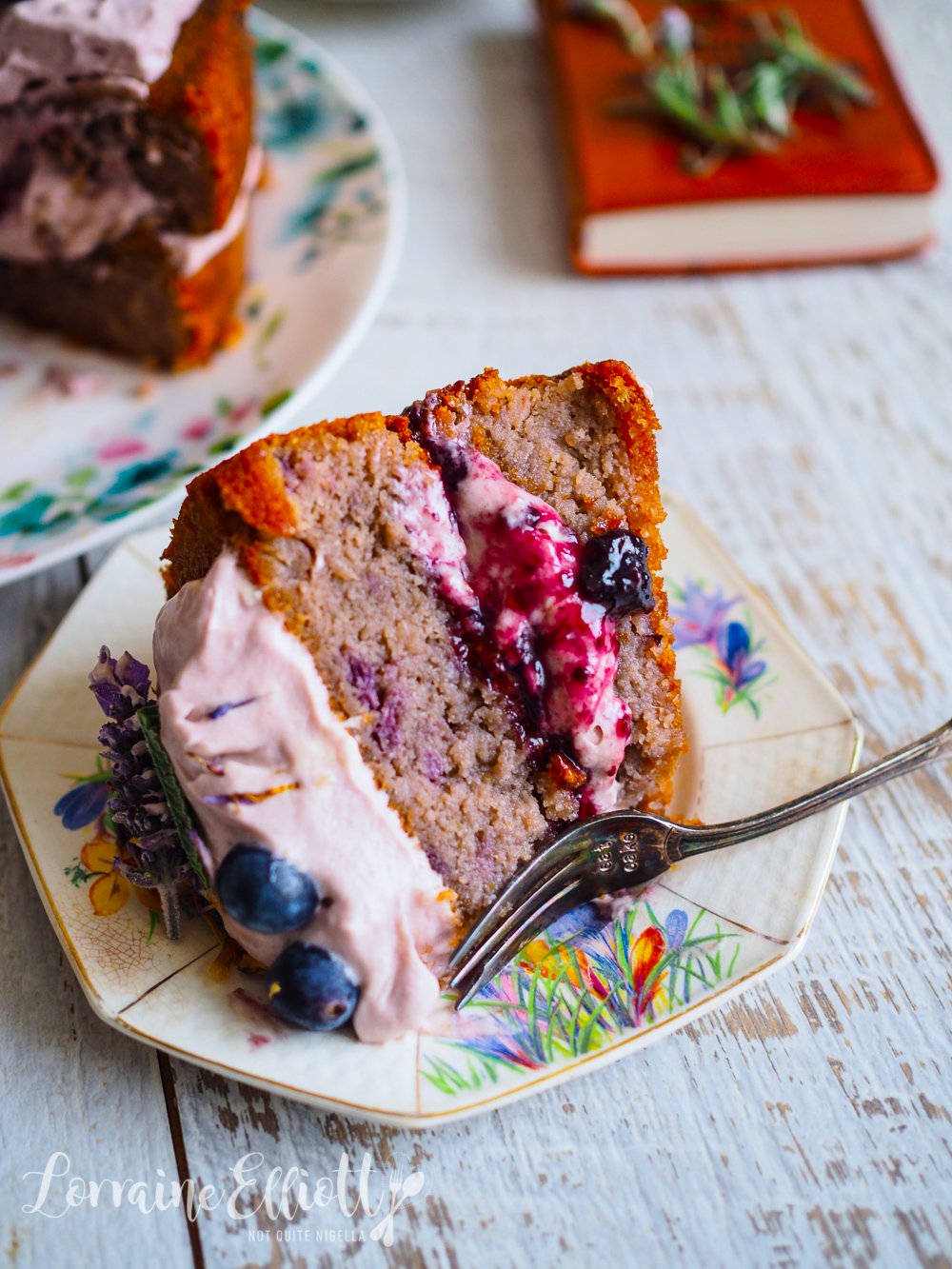 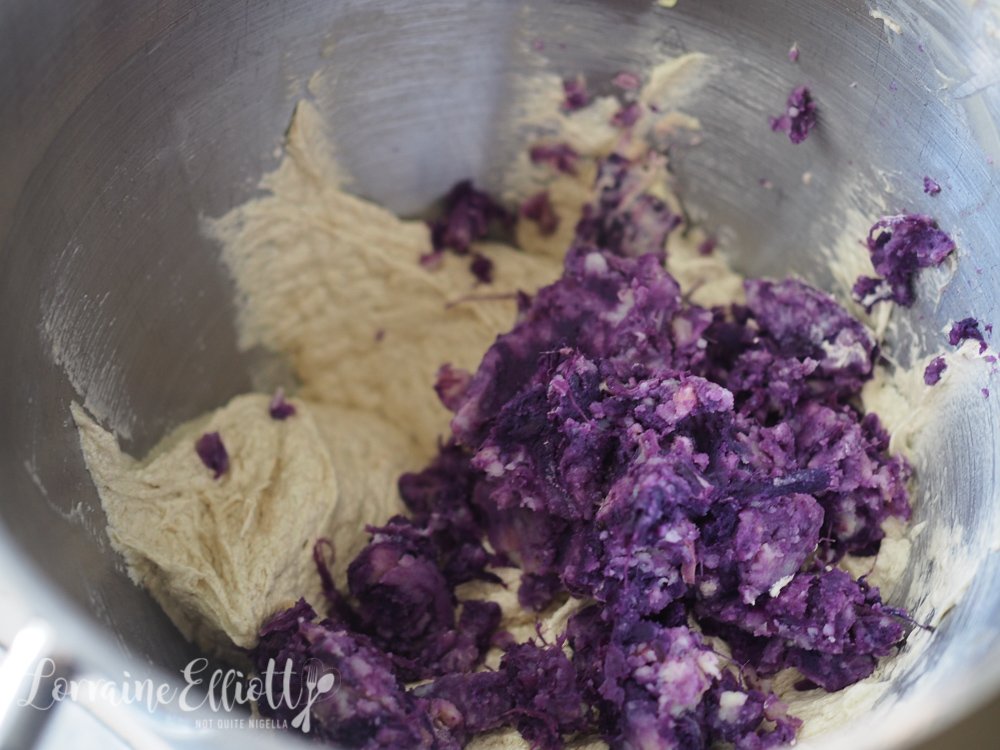 Step 1 - Grease and line 2x20cm/8inch round tins on the base and sides. Preheat oven to 160C/320F. Beat the butter, sugar and Woolworths Macro Lavender Latte Powder together until pale (around 3 minutes). Beat in eggs, one at a time making sure that it is mixed in well before each addition. Add the mashed potato and lemon zest and buttermilk and mix until incorporated and then add in the almonds and baking powder. 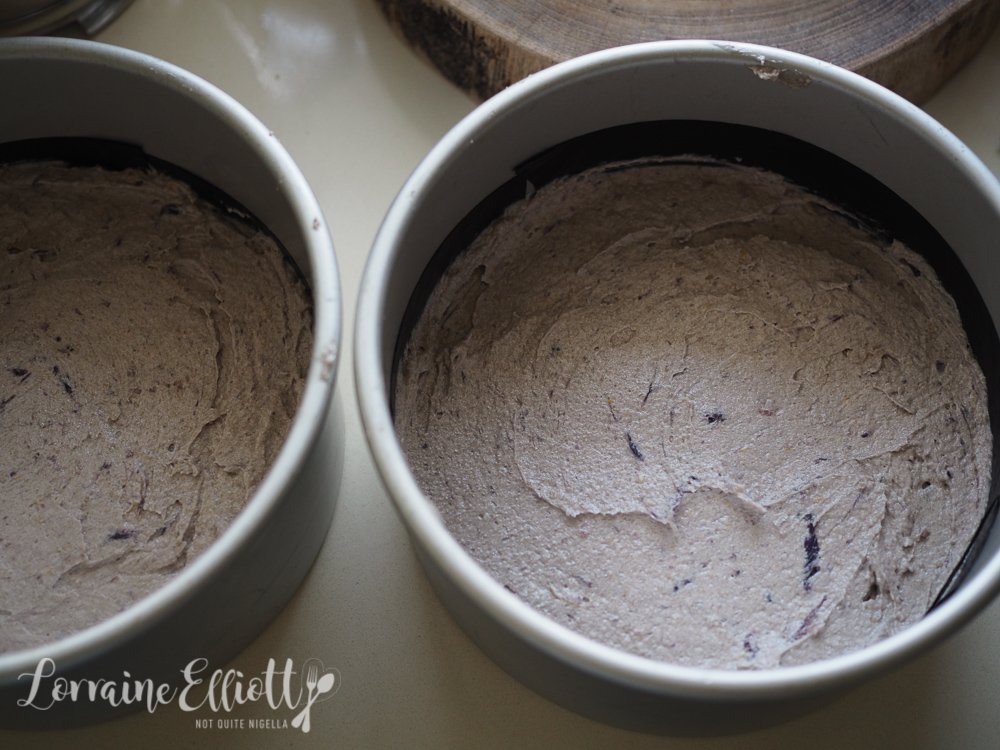 Step 2 - Divide mixture among the two tins and bake for 55-60 minutes until done in the centre. The cake is quite light and springy in texture. As soon as it is baked, cover with a tea towel and place in the freezer for 45 minutes or so. This helps make the cake very moist. 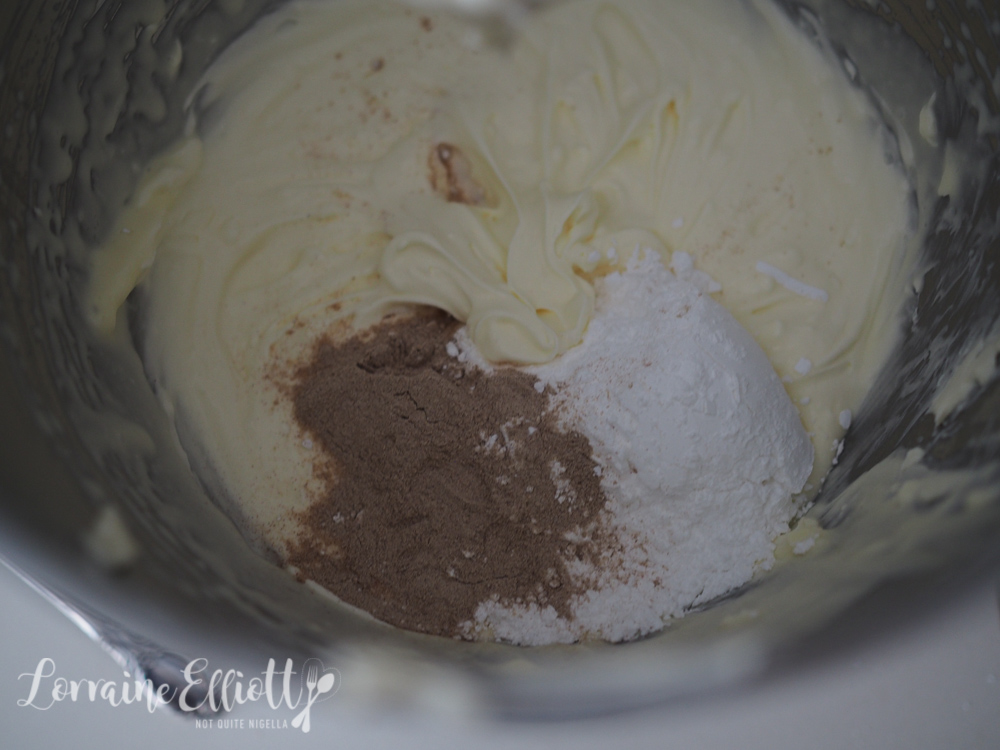 Step 3 - Beat the mascarpone until smooth. Then switch to a whisk attachment and whisk with the cream to form a billowy whipped mascarpone. Add the icing sugar, Woolworths Macro Lavender Latte Powder and purple food colouring and then whisk until just done (don't over whisk). 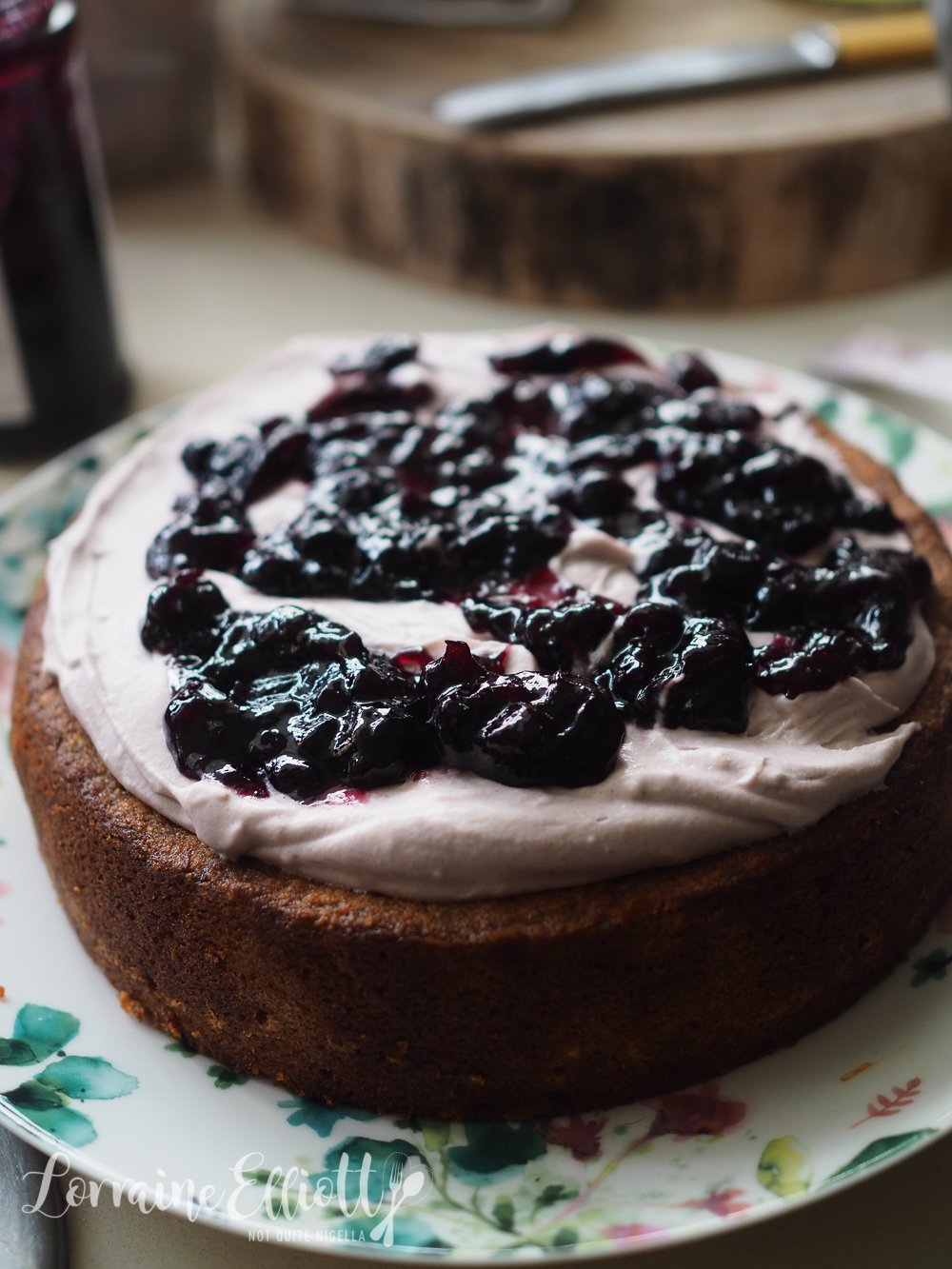 Step 4 - Run a knife around the edge of the cake and carefully remove it (it will be delicate and you can certainly make the cake a day ahead of time and then fill or ice on the day you want to serve it. Place one cake layer on a serving plate and cover with half the mascarpone cream. Top with blueberry jam and then add the other layer. Top with the remaining mascarpone cream, fresh blueberries and lavender. 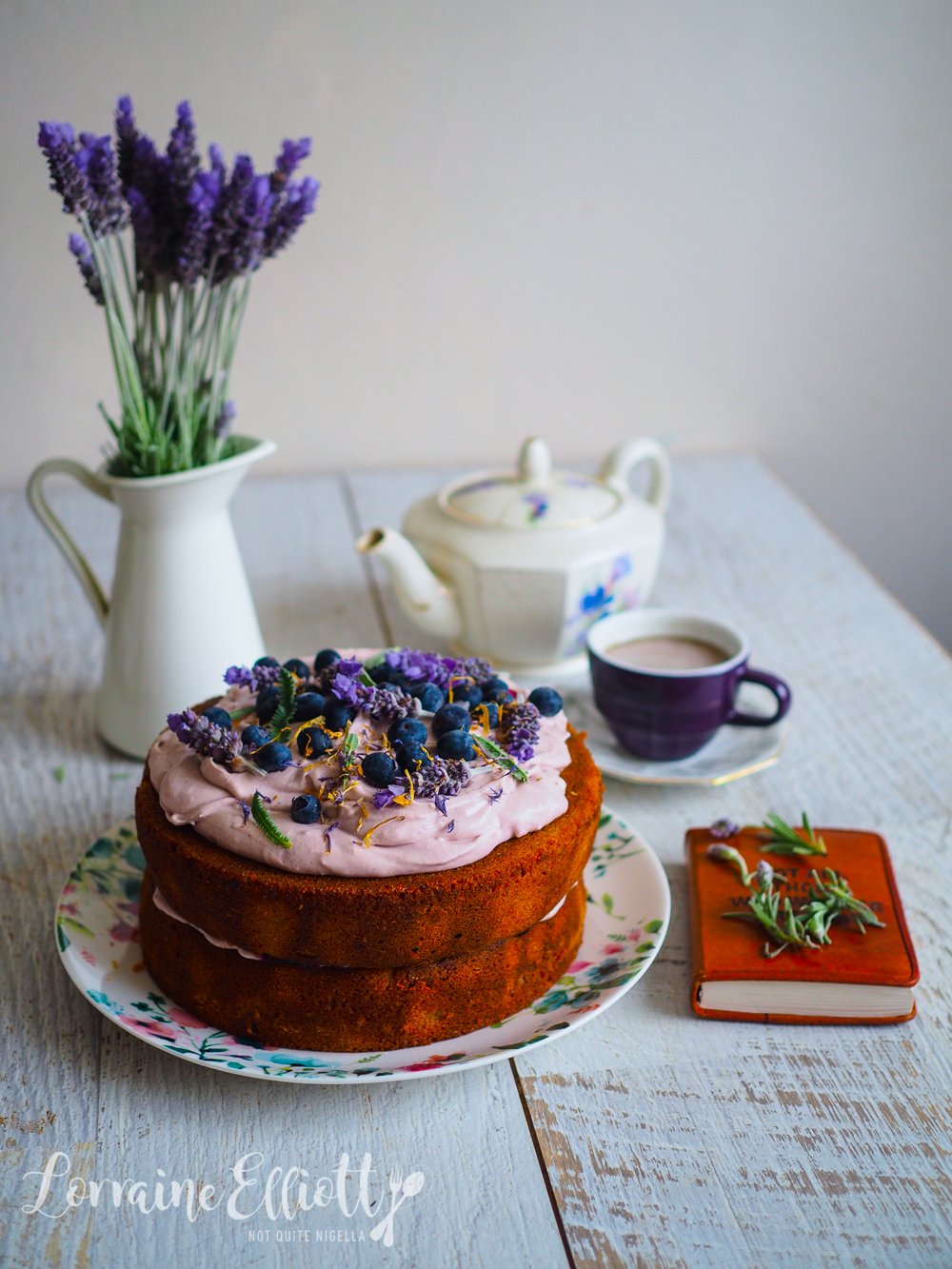 Always read the label to ensure the products in this recipe are right for your individual needs, particularly if you suffer from food allergies.