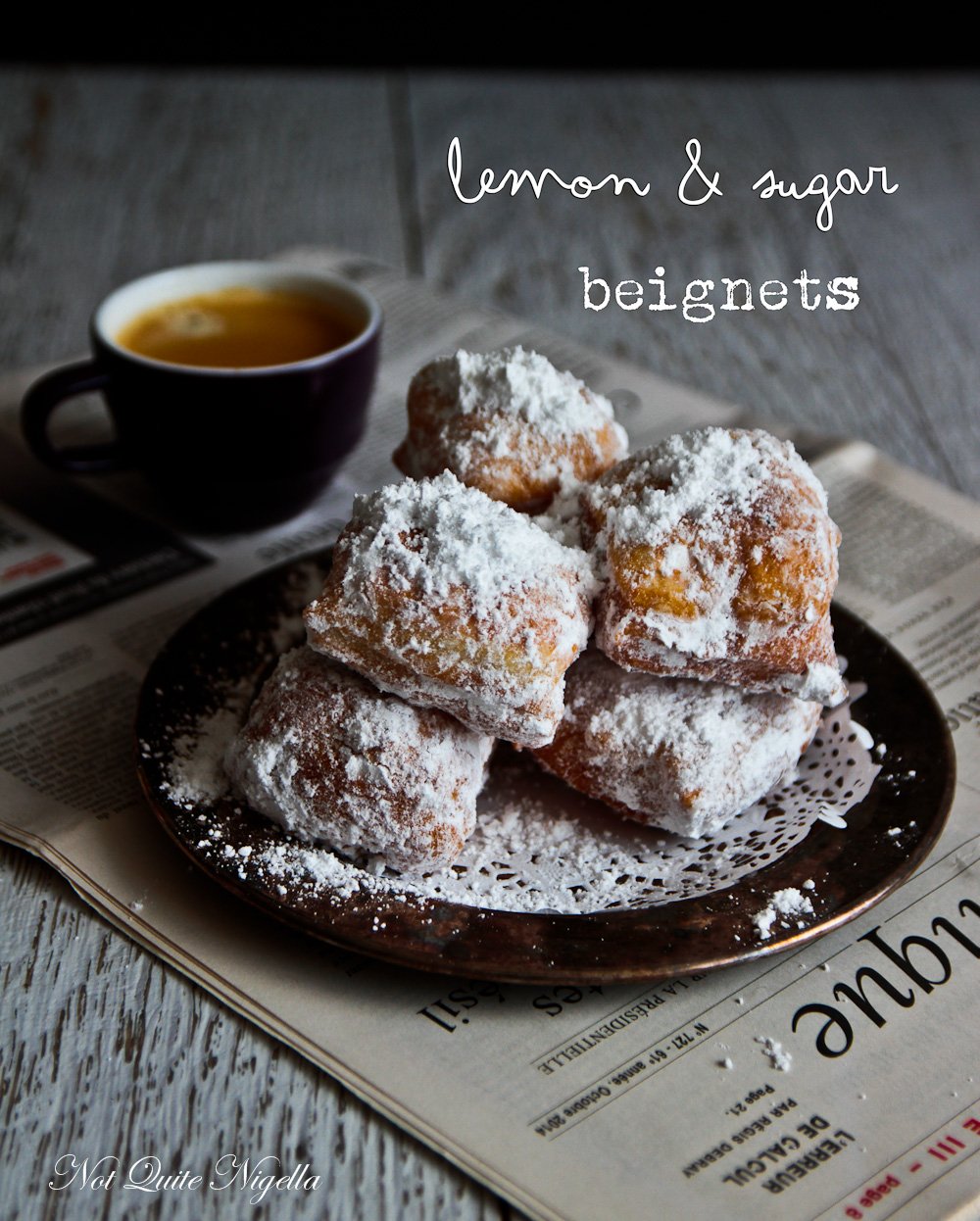 A New Orleans classic, the beignets from Cafe du Monde are a must eat for any visitor to the intoxicating and intriguing city of *"N'awlins". These beignets are a fluffy and light as air doughnut cooked to order. The cafe is open 24 hours a day 7 days a week and does a furious trade in these beauties. They're covered in a blanket of icing sugar that always gets on your clothes and yet, you tend to not mind a jot. Here is a version of the classic Cafe du Monde beignets but with a little twist of lemon and sugar.*

A while back I was having a pretty bad day. You see I had just gone for lunch with a friend which was not the bad part. Afterwards I walked to catch a taxi home at the cab rank. The taxi was one where you slid the door open but the taxi driver just kept telling me, "Pull!" so I did. When I finally realised that I was actually meant to slide and not pull the door I did so and slid into the car.

"Idiot," he muttered under his breath, not too quietly.

"Pardon?" Because when I'm confronted with insults, my first instinct is disbelief.

"Nothing," he said rolling his eyes before muttering again, "Idiot."

I grabbed my bags and leaned forward. He smelled terrible, the greasy stench of his lunch apparent when I got closer to him. "I don't have to put up with your attitude, and besides which you said pull!!!" I said and got out of the taxi.

As I stood at the cab rank waiting for another taxi he wound down the window and mouthed the C word to me repeatedly. If I were in the right frame of mind I would have video'd his little performance but those things always come to you much later as do smart retorts. Instead, as he drove off I simply noted his license plate and rang the taxi council afterwards. They were terribly impotent and useless offering up a meek, "Well it's your word against his," which I thought was indicative of greater service problems. 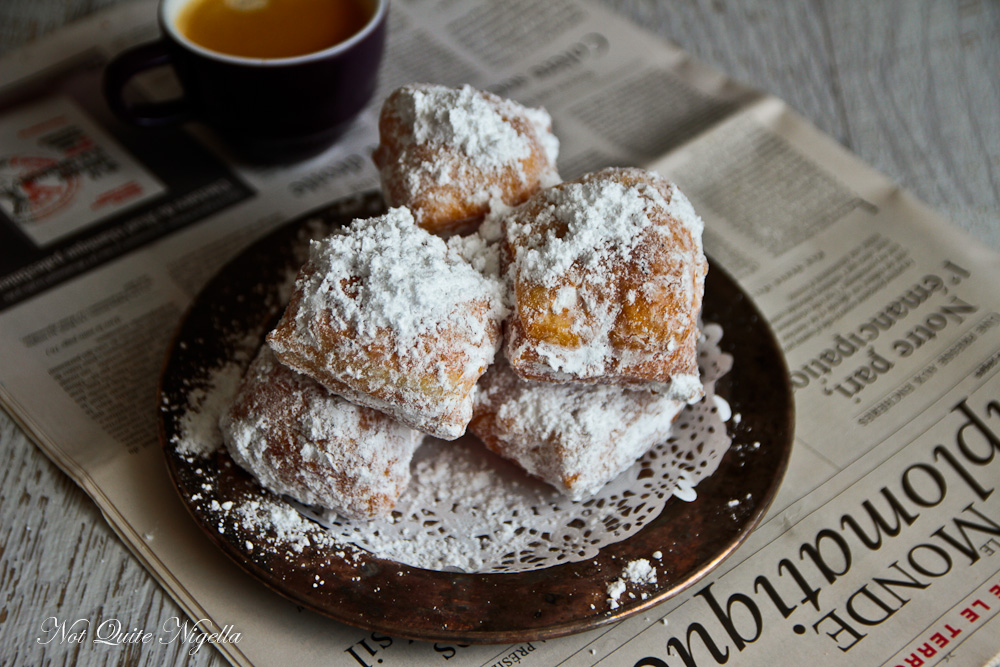 The best way of course to deal with meeting a dreadful person is to cook it out. You know how sporty people do boxing and other sorts of adrenalin fuelled activities (I really have no idea what they do as you can probably tell). Well my solution is to bake it off or cook it out. And with a recipe that kicks all arses really.

The best beignets I've eaten are in New Orleans at the Cafe du Monde. Here beignets (French for doughnuts) are made to order and served around the clock, 24 hours a day, 7 days a week. They're beautifully light with a thick blanket of sifted icing sugar on top. And for all of their legend and allure, they're really easy to make.

The benefit of the dough is that you get to knead out any frustrations (but using a dough hook is also a possibility). My favourite bit is punching down the dough in one swift, deep blow. Then it's a matter of cutting the dough up and frying it. I know many of us, myself included don't like deep frying but this is worth making an exception for. These beignets are golden delicious and light too so that they don't feel overly greasy or heavy. I put up a picture on my facebook and a reader Kelli B said, "Perfect! If you're feeling daring, squeeze a little lemon over them."

Well blow me over with a feather, Kelli was so right. As an avid fan of lemon and sugar crepes, the lemon and sugar beignet is a great riff on the original. It's not strictly traditional as in what they serve at Cafe du Monde but it's a brilliant idea. Thank you Kelli! And after one you'll be wondering about who exactly annoyed you, I promise ;)

So tell me Dear Reader, have you ever complained about bad service? What was the outcome? Would have you thought to film the egregious behaviour? And how do you deal with a dreadful person or day?

P.S. Re. the taxi driver, months later I saw him on Today Tonight, his license cancelled for all sorts of infringements including being rude and aggressive to customers and urinating in public. He was dubbed "The cabbie from hell."

Another idea: fill with Nutella! Because chocolate makes everything better :)

Step 1 - Place the flour, yeast and sugar in the bowl of an electric mixer fitted with a dough hook (or knead by hand). In a jug whisk the water, milk, oil, egg and salt. Place the machine on the lowest speed and add the wet mixture into the dry mixture adding a little more water if needed (I needed 1/8 of a cup more) and knead until it becomes an elastic dough - about 8 minutes by machine, 10-12 by hand.

Step 2 - Shape into a ball and spray the inside of the bowl with oil and place the ball of dough inside. Cover with cling film and allow to rise to two or three times its size in a warm area (I put it in a recently turned on oven) for at least 2 hours. Apparently they rest the dough at Cafe du Monde for 16 hours. 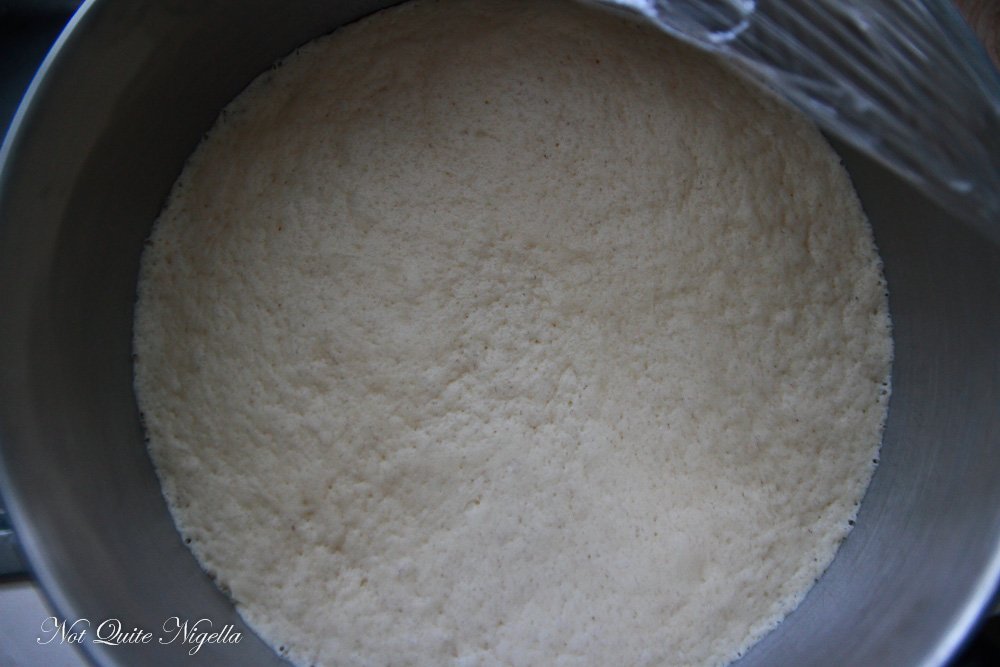 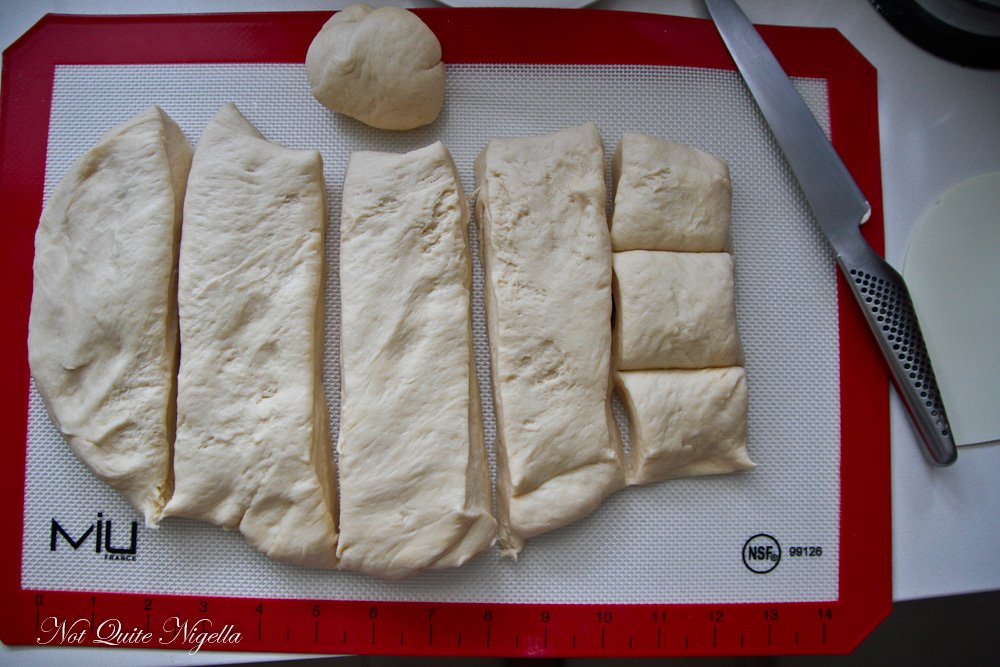 Step 3 - Roll out the dough to about 1/2 an inch thick and cut into squares about 2 inches wide. Do not reroll as this will make the beignets tough. Heat the oil until it reaches 187°C/370°F. If you don't have a thermometer put a wooden chopstick in the oil and if bubbles form around it then the oil is ready. Place the squares in the hot oil and fry on both sides making sure that they are golden. This takes between 3-5 minutes. They will puff up as they cook. 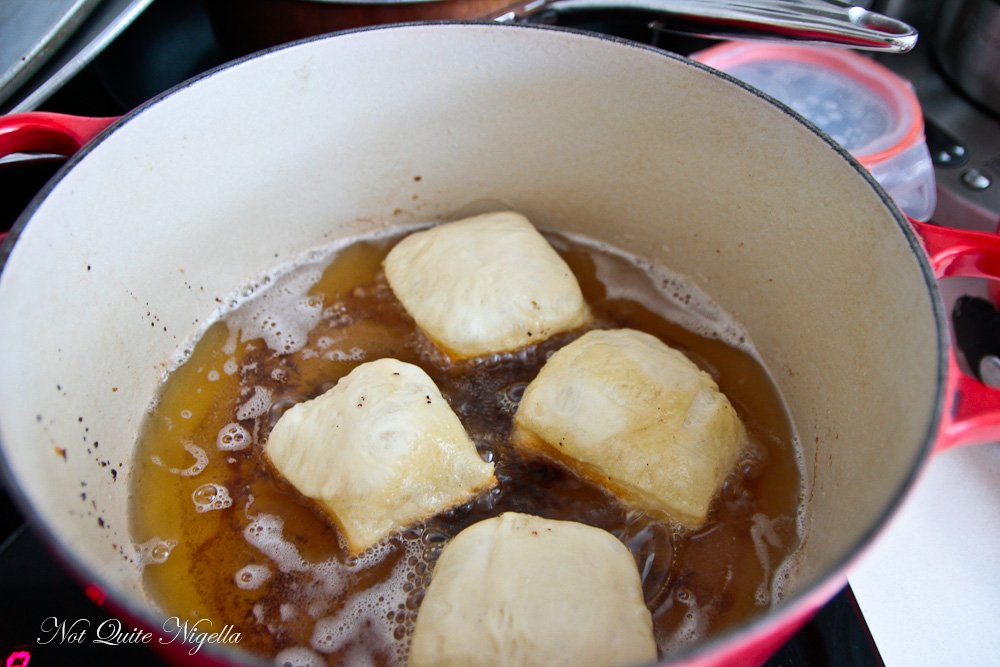 Step 4 - Dust with a generous amount of icing sugar and lemon zest or juice if using and serve straight away.