Getting to know you: Toronto's Little Italy 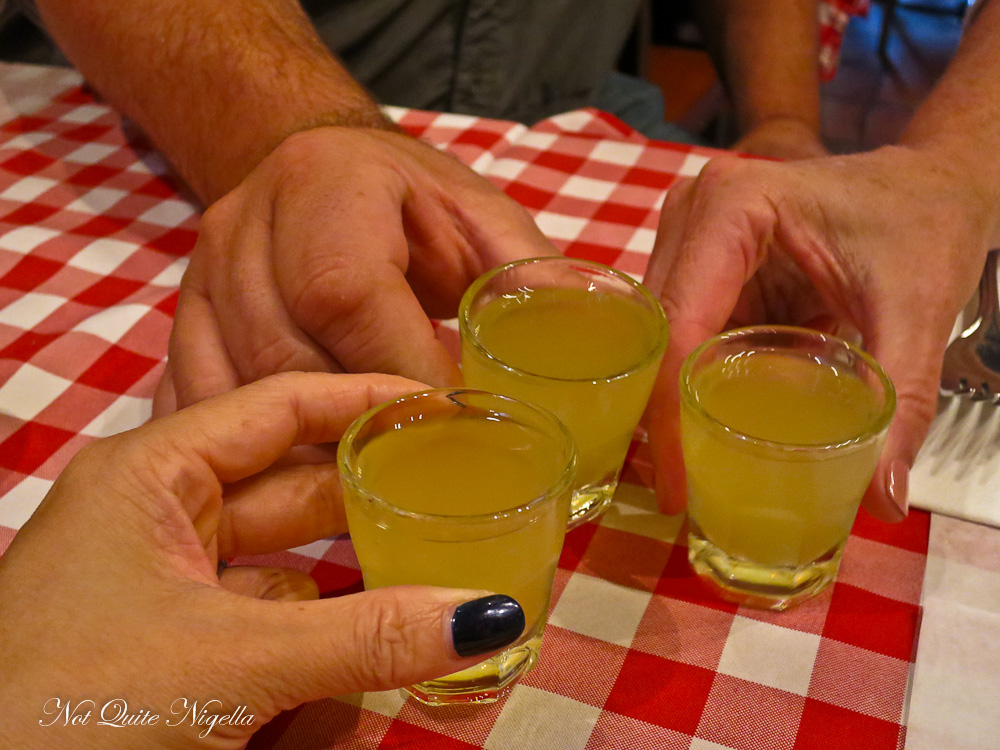 One of Toronto's favourite neighbourhoods is Little Italy. Taking a walking tour of it with chef Scott Savoie requires at the very least an insatiable hunger. That is a hunger to eat as well as learn all about the little secrets of each neighbourhood. In between bites of luscious hand made lasagna or pizza topped with gorgonzola, pear, walnut and Italian honey he tells us about the former inhabitants of the neighbourhood. 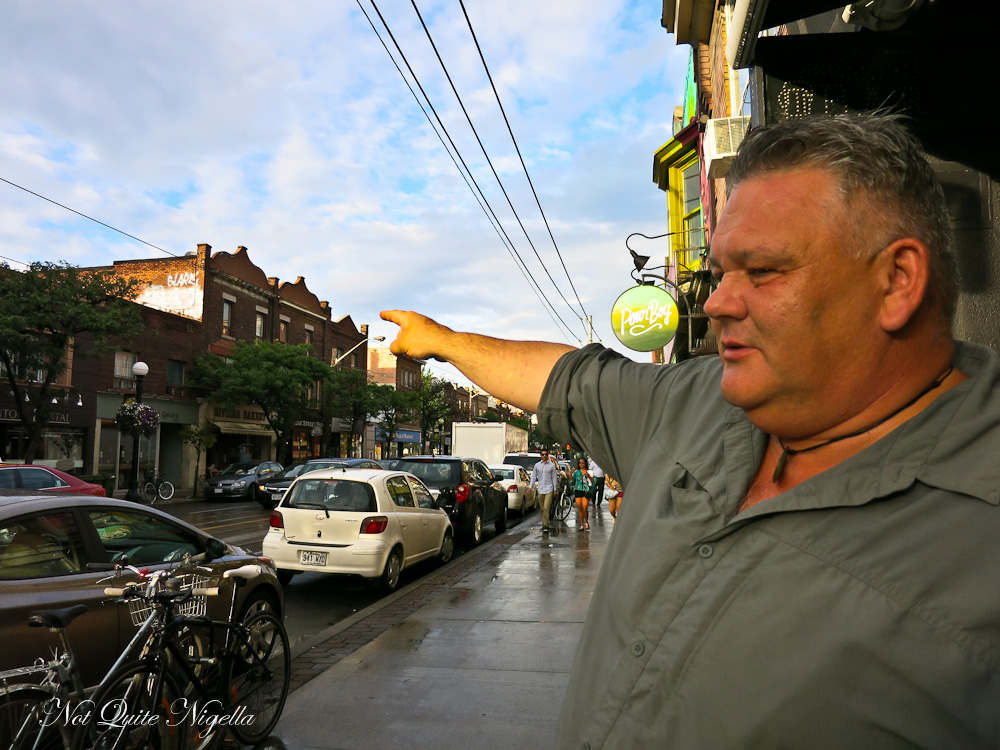 Chef Scott Savoie scoops up some pasta sauce with his fingers and licks his fingers with great, appreciative relish. He looks up at me straight in the eye and explains that the woman in the kitchen that made this delicious sauce is 85 years old. She started the Italian restaurant Trattoria Taverniti four year ago when she was 81 because "She got a good deal on a 25 year lease!". 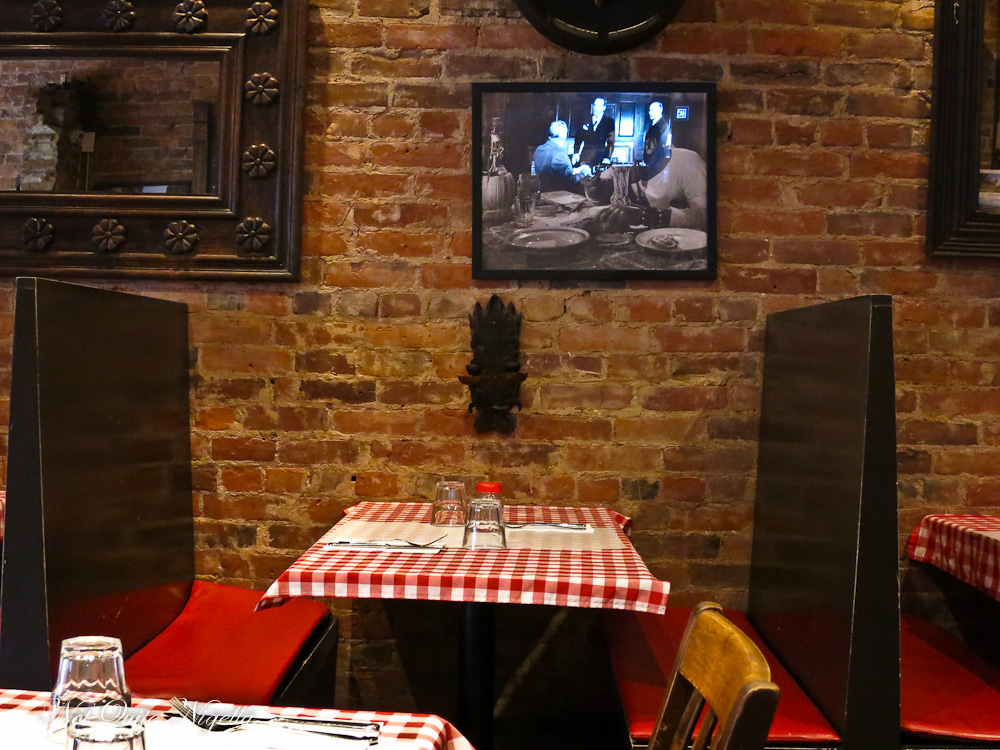 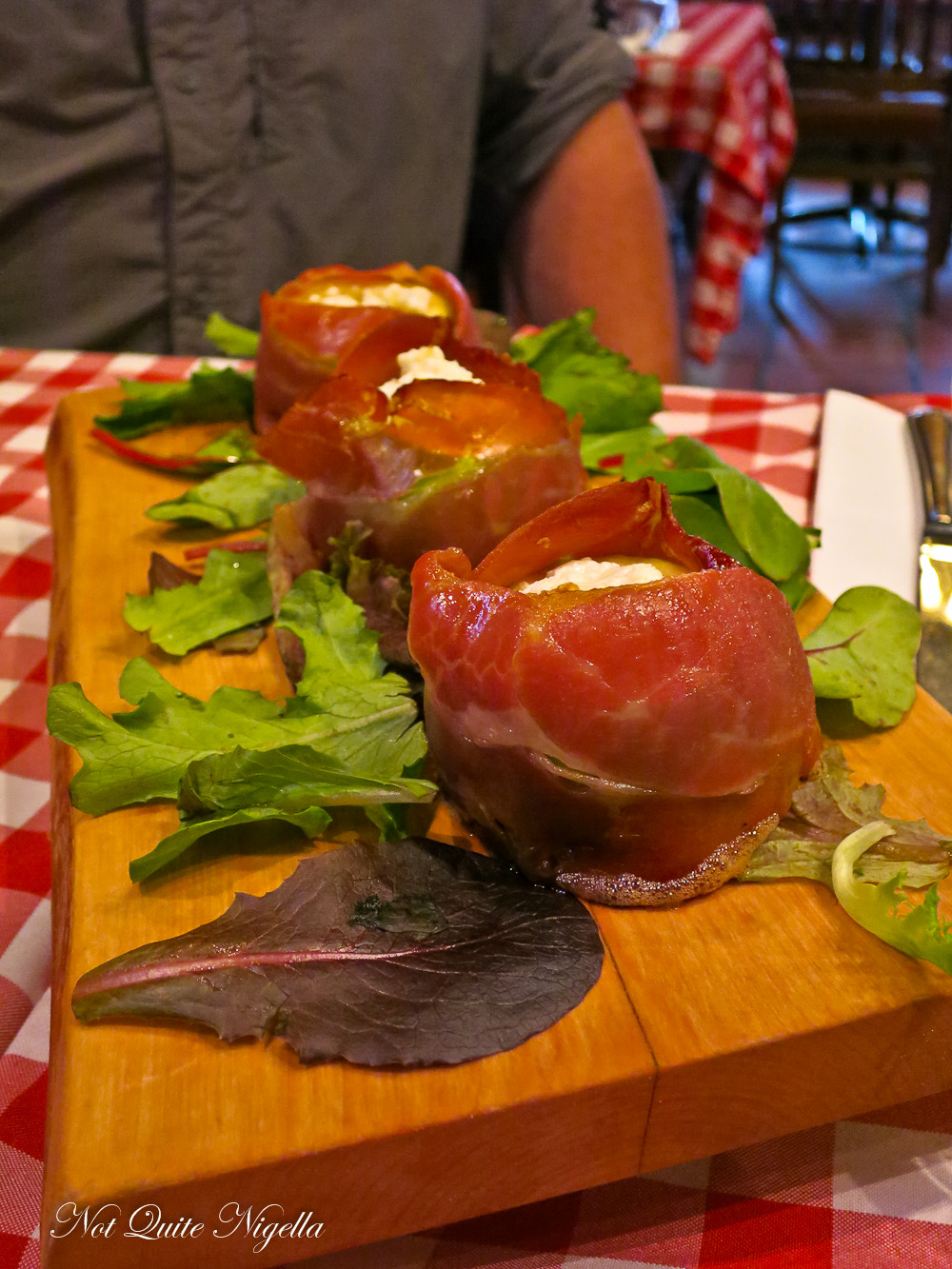 Chef Scott's tours started five years ago and the Little Italy tour is the only tour that he always leads as it is a chef driven tour. He was born in New Brunswick but candidly admits, "I lost my shirt in the restaurant business." He currently hosts 11 food tours, 6-7 culinary adventures as well as personalised tours. The stops may change according to what he sees in the neighbourhood and they demonstrate the variety of restaurants even in an Italian enclave like Little Italy. We were supposed to do the ultimate Canadian adventure paddling a canoe and having a picnic but an inclement weather report changed plans quickly. 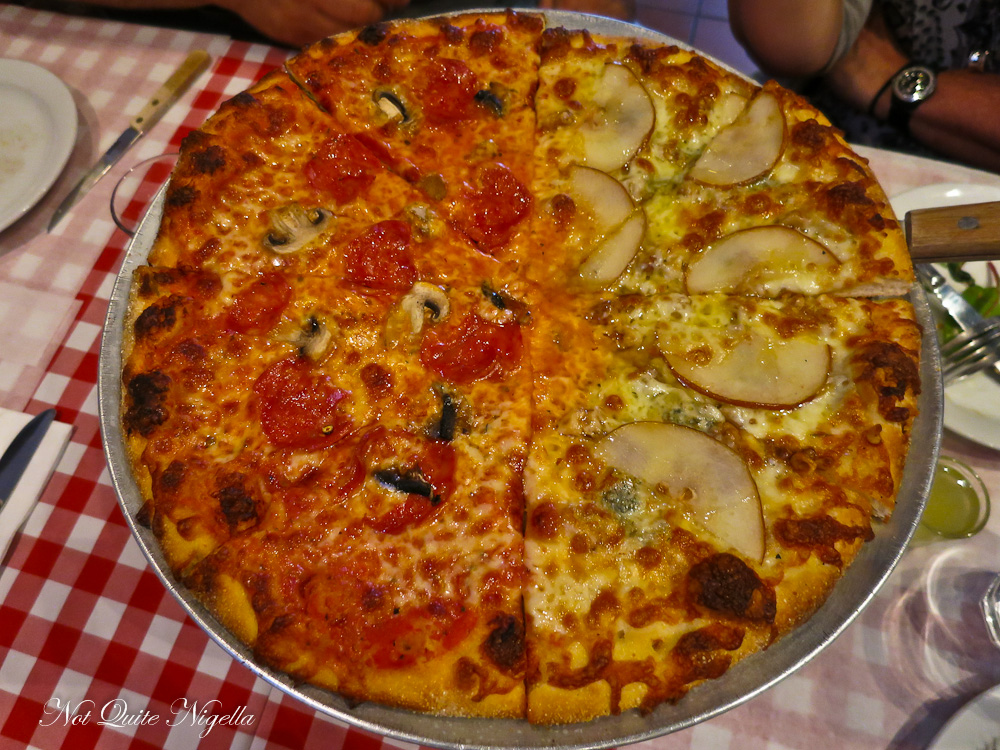 A pizza arrives at the table. The mother and son duo of Rosina and Domenic Tavertini are from Calabria so the pizzas are crispy bottomed and thin but not as thin as Napoletana style pizza. Scott has chosen a half half pizza - one half is the pizza that nabbed them 5th place in an Italian pizza competition (sobrassada, mushroom and cheese) and the other half is Scott's favourite (gorgonzola, pear, walnut and Italian honey). Both toppings are excellent but I must admit that the sweet gorgonzola and pear one steals my heart. 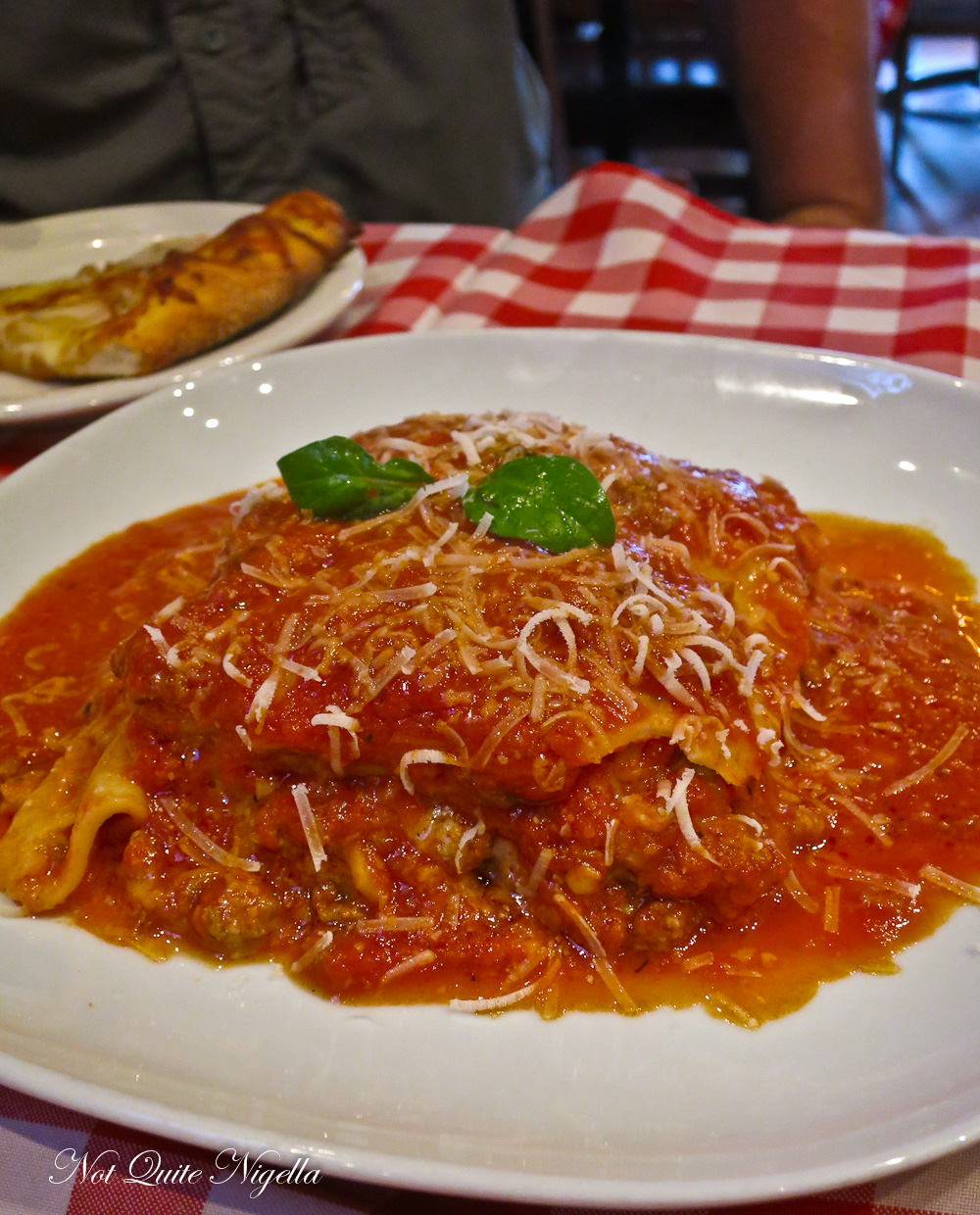 "You can't come here without trying the lasagna," he says and moments later a steaming plate of lasagna arrives at the table. Nonna Rosina starts prep at 6am where she makes sauce, lasagna noodles and the tiramisu. She shuts up shop at 10am where she does Aquafit and then 3 kilometres around the track. The lasagna sauce is rich and scoopable as Chef Scott proves when he dips his fingers into it. 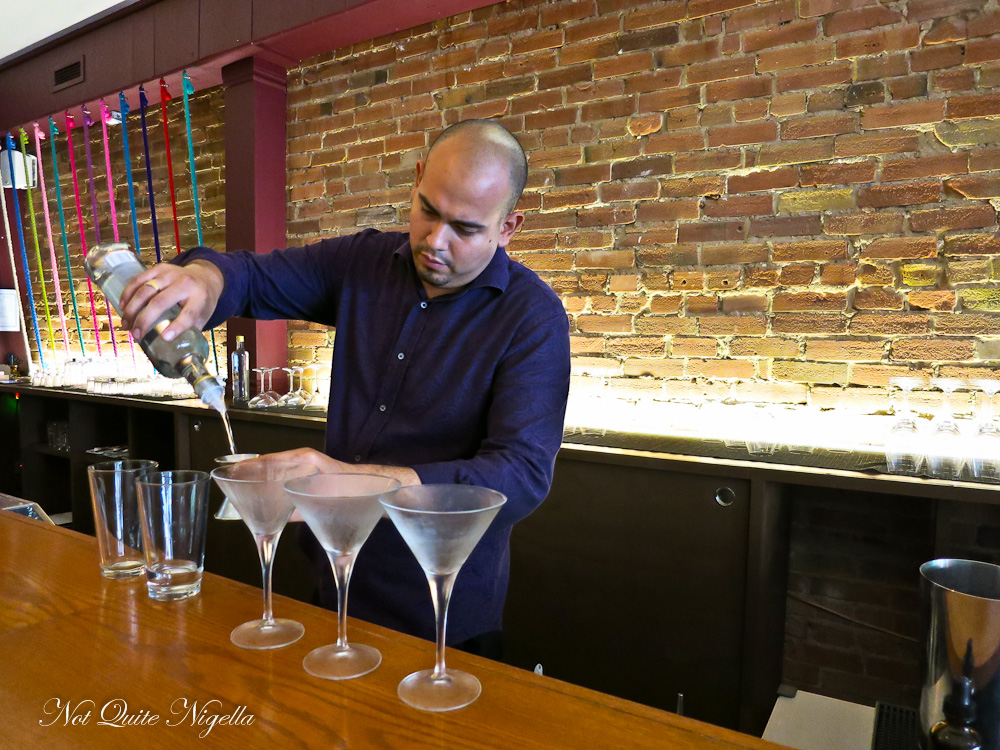 Usually there are three stops where you get to try four dishes so a total of twelve but tonight he has added a couple more just to show us the diversity of his neighbourhood. Case in point: Pisco, the new Peruvian bar has only been open 2 weeks when we walk through their doors but the two brothers that own it already know Scott well. 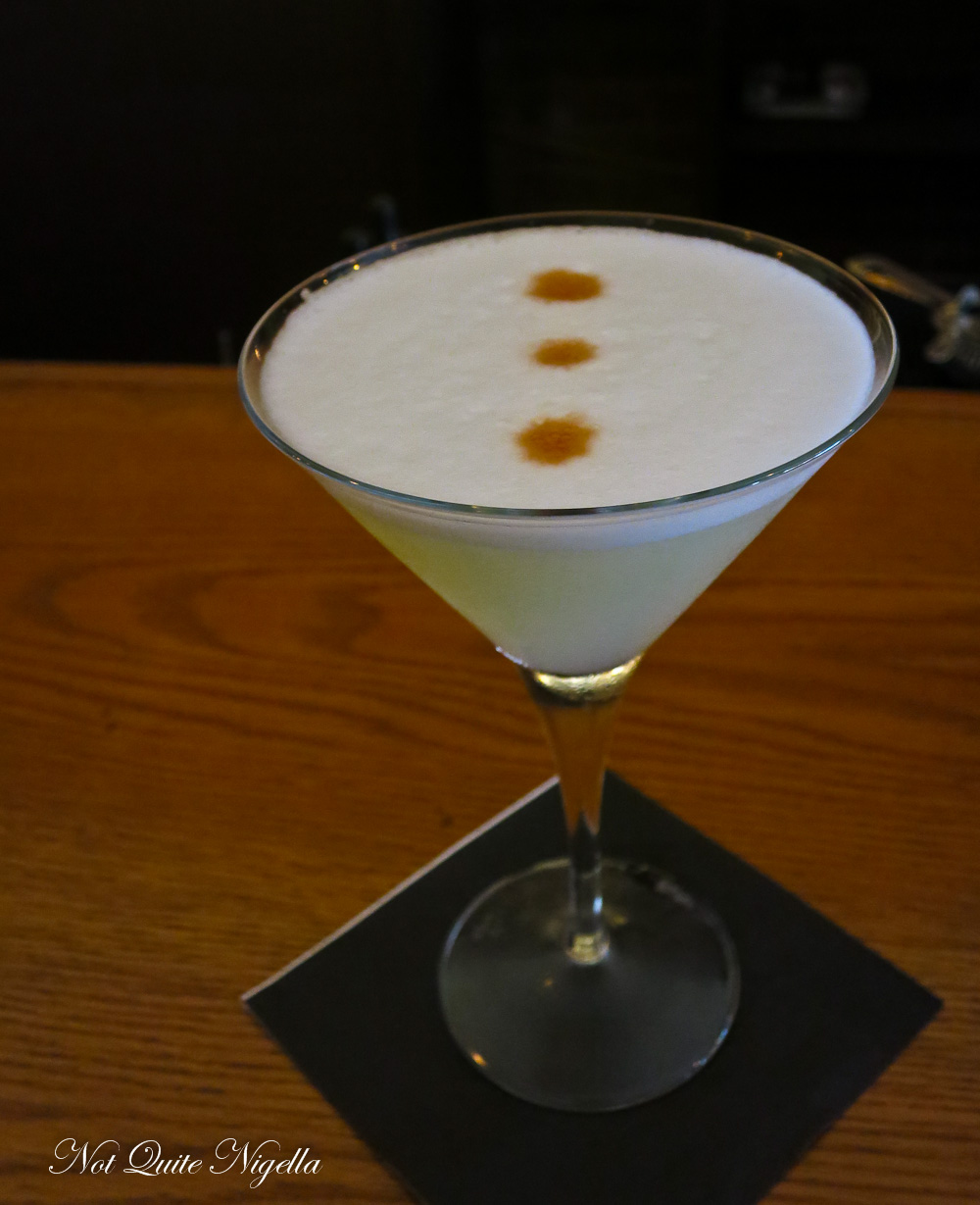 It's a given that we will have a Pisco Sour and it's absolutely fantastic - easily one of my favourite cocktails. They ask us if we know about the history of Pisco Sour? Did we know that it was invented in the 1920 in San Francisco by a mixologist? Gran Hotel Bolivar added the egg white and Angostura bitters years later to create the Pisco Sour of today. 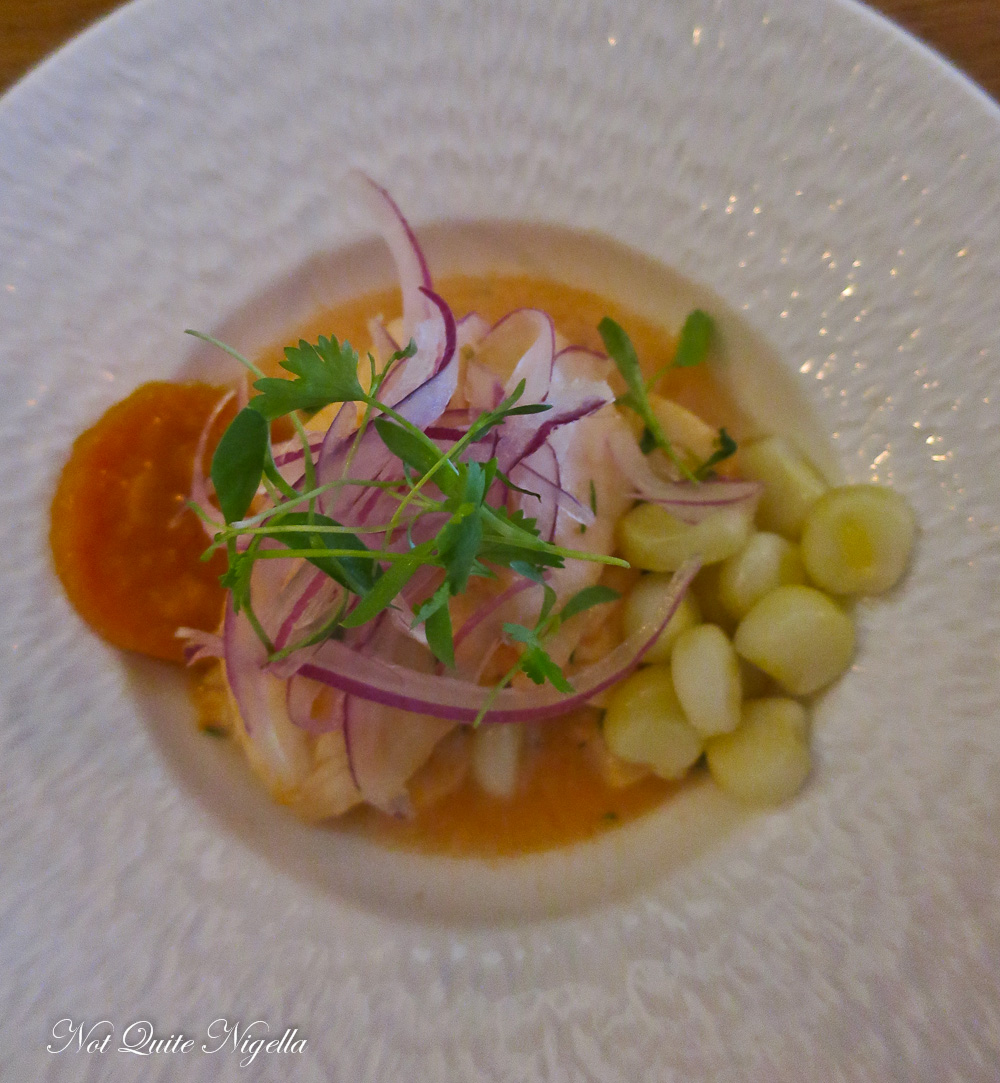 We sip and wait for our ceviche. Peruvians pride themselves on this dish and it is always made fresh to order. The fish changes daily and today it is butterfish. I've had a lot of ceviches and this is certainly one of the tastiest with good sized pieces of fish marinated for just the right amount of time. There is just lime juice and aji limo chilli pepper in the sauce. 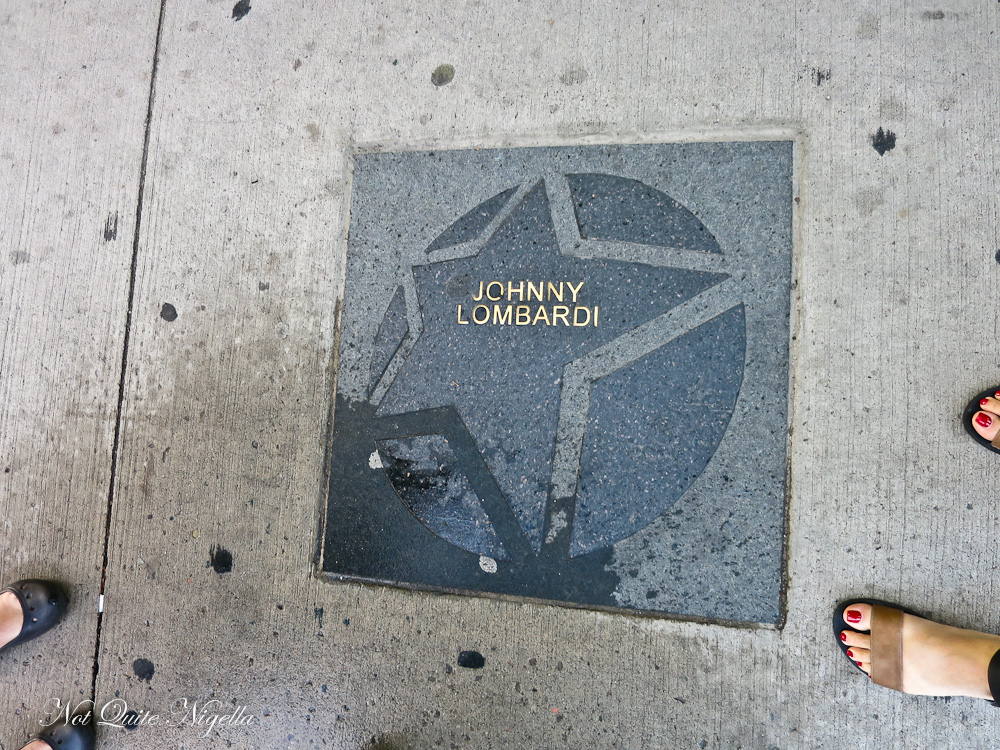 It's time for our third stop and this one we are headed back to Italy. We walk past some stars set into the ground. Scott points to one. Johnny Lombardi was a grocer that played trumpet in the rooms above his shop on ham radio (a precursor to CB radio). He was so beloved by the people that his statue across the road has the hands rubbed bronze from the handshakes. 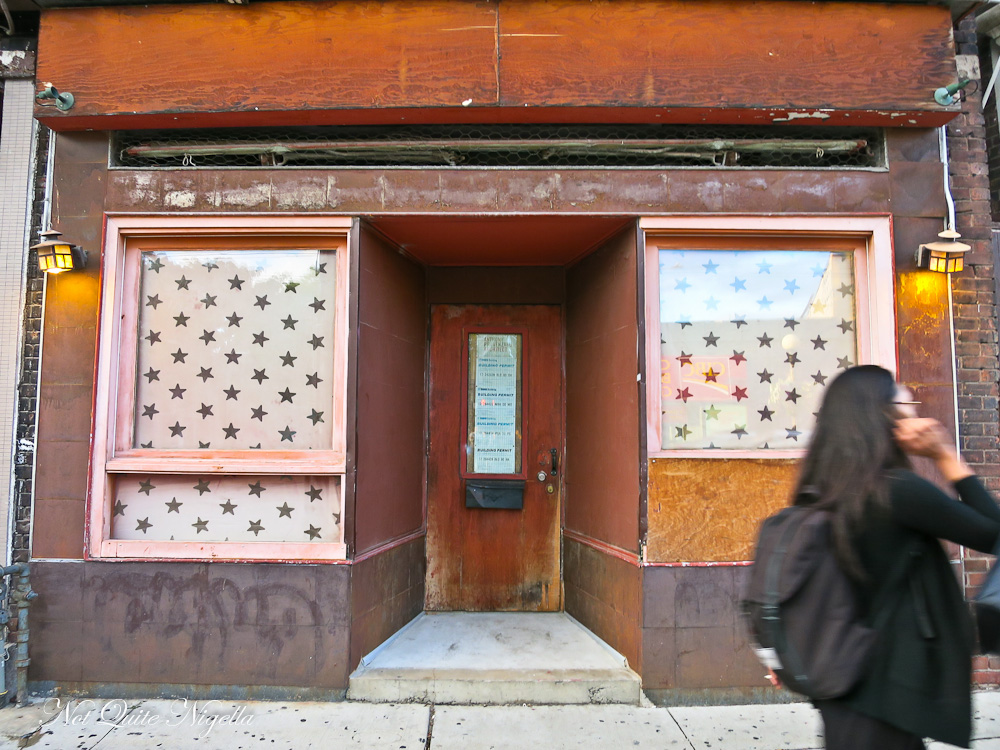 "See that there?" he says pointing to two lights. He explains that having the two lights on means that the poker game inside will be on at 2am, having one light on means that it is one at 1pm. 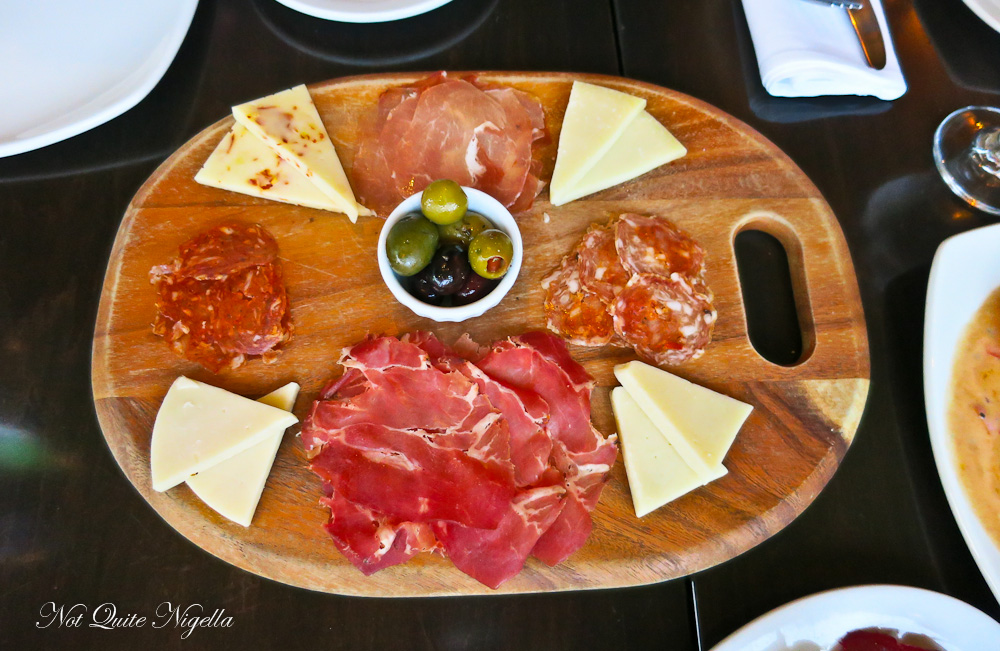 We walk into Marinella which is an entirely different vibe from Trattoria Travertini. It is a bit more upmarket rather than a homely vibe. They explain that they do many things in house from the meats, pasta to the pickles to the bread. It seems everything but the cheese is made in house. The charcuterie is made using meat from the Mennonites so that it is hormone and anti-biotic free. 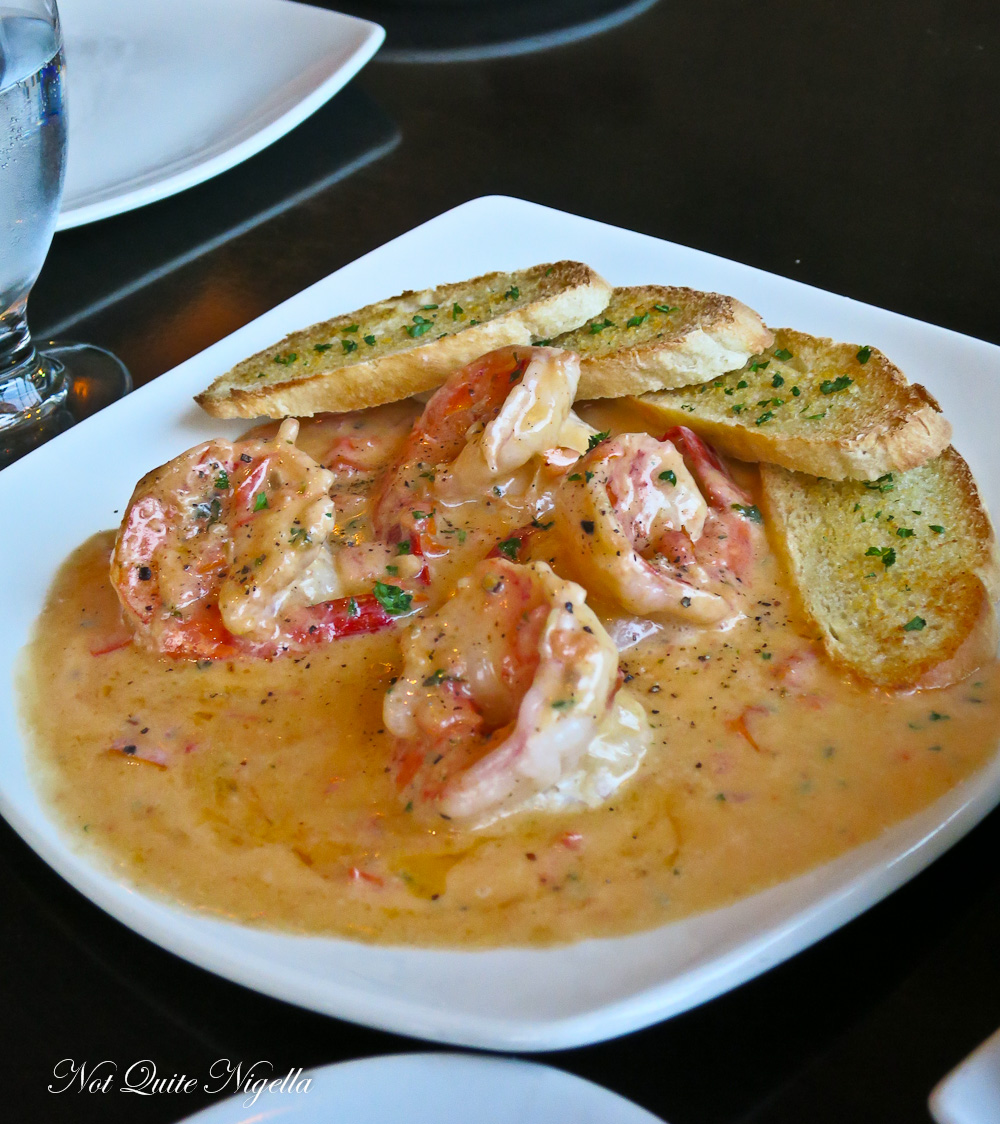 We try some prawns in the famous Marinella sauce which is a creamy tomato sauce. Oh my goodness, if ever there was a sauce to cause someone to lick a plate this is it. It's rich in garlic and so hard to put down that I have to force myself. We have a few more stops to go!

I pick at the meat and cheese platter having gorged myself on the prawns. There is Asiago cheese, Frailano, Pepato and a shepherd's milk cheese. Accompanying this is a Genoa salami, capicolo, sobrassada and a filet tucio cured pork loin. 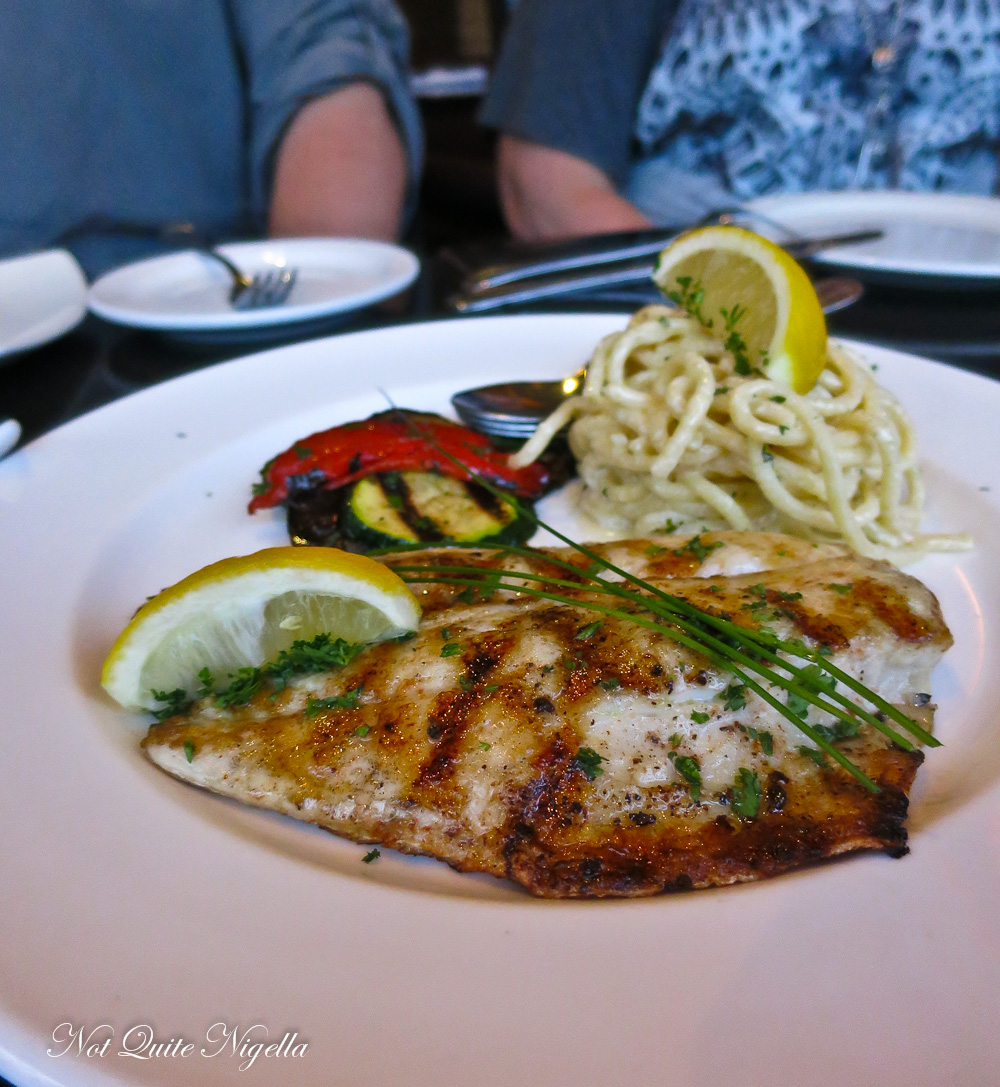 Then comes out the fish - this is flown over twice a week from Greece and is simply pan fried and then accompanied with a lemon cream sauce and home made spaghetti. It's a great combination. 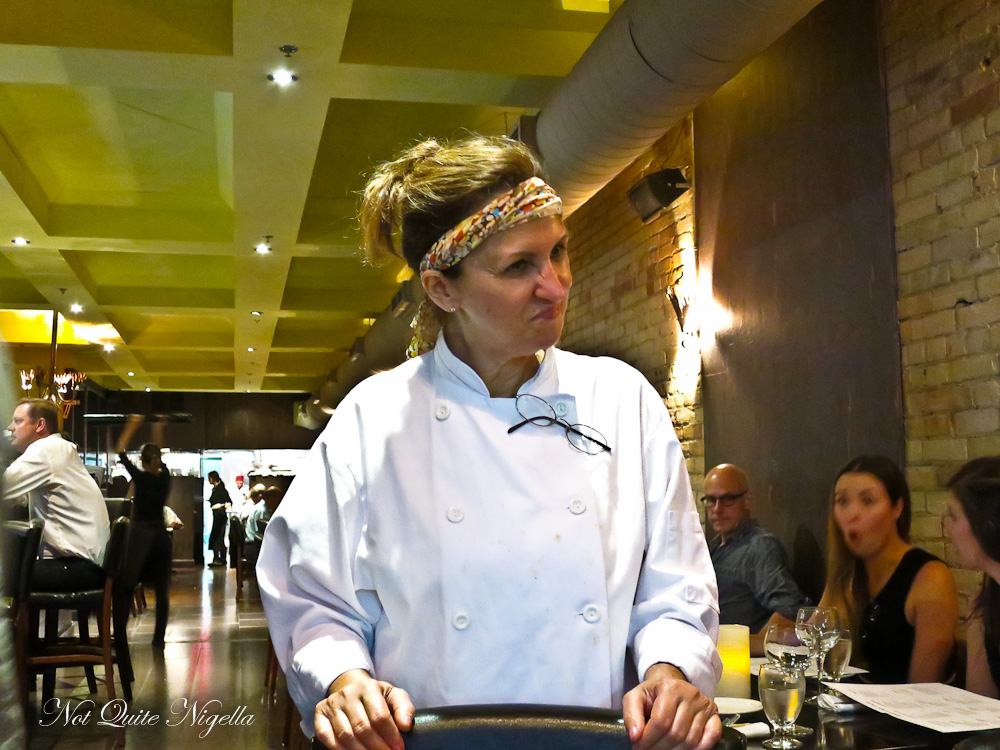 Mama Mary comes out from the kitchen to say hello and she brings with her a creamy, light tiramisu made with home made mascarpone. She's very sweet and modest and we don't keep her long as she is clearly busy. And we need to bounce to our next stop. 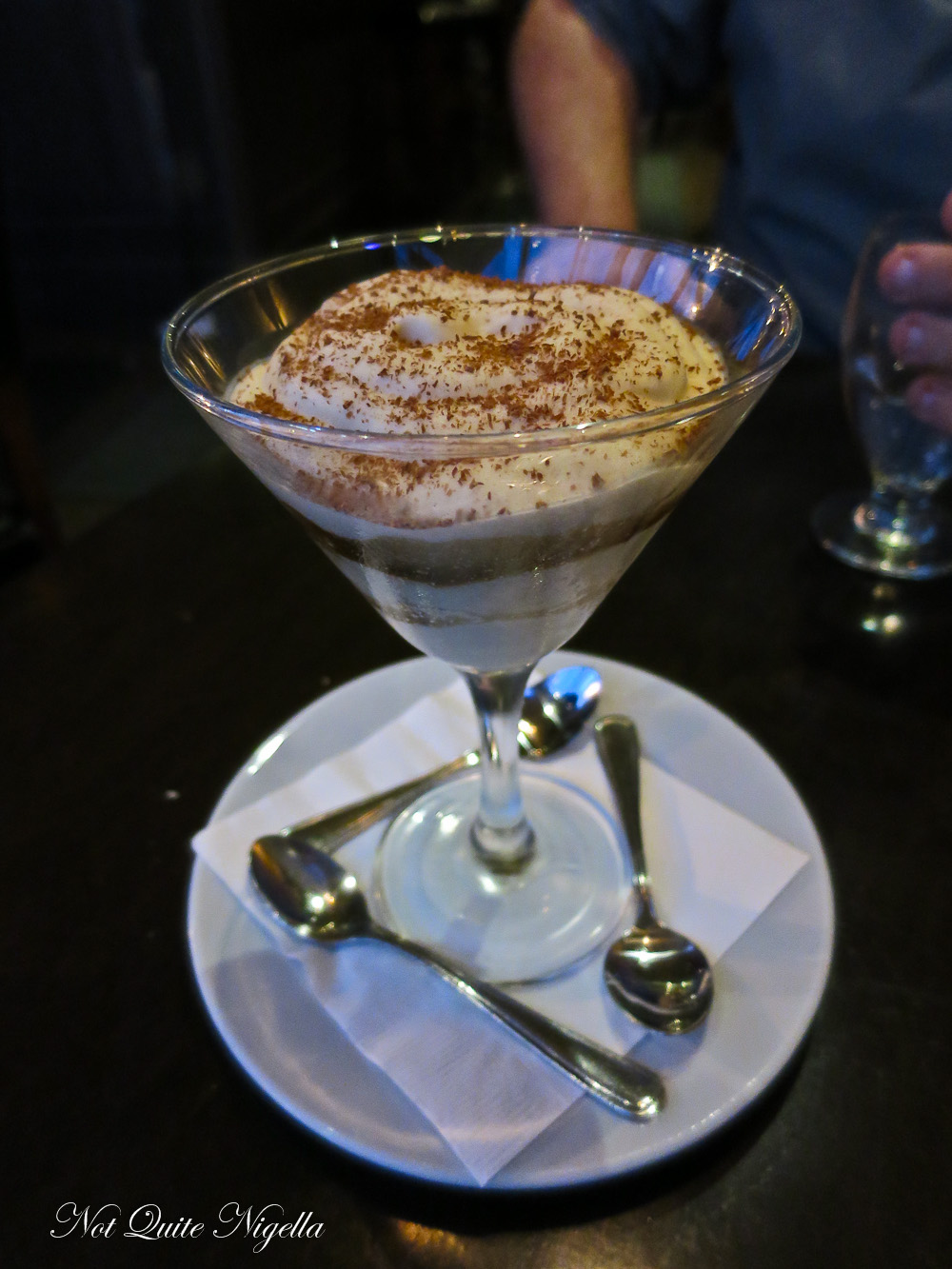 "There's the oldest gelateria in Toronto," says Scott pointed down the road (Sicilian Sidewalk Cafe). But we are headed in another direction in Little Italy. For Japanese! 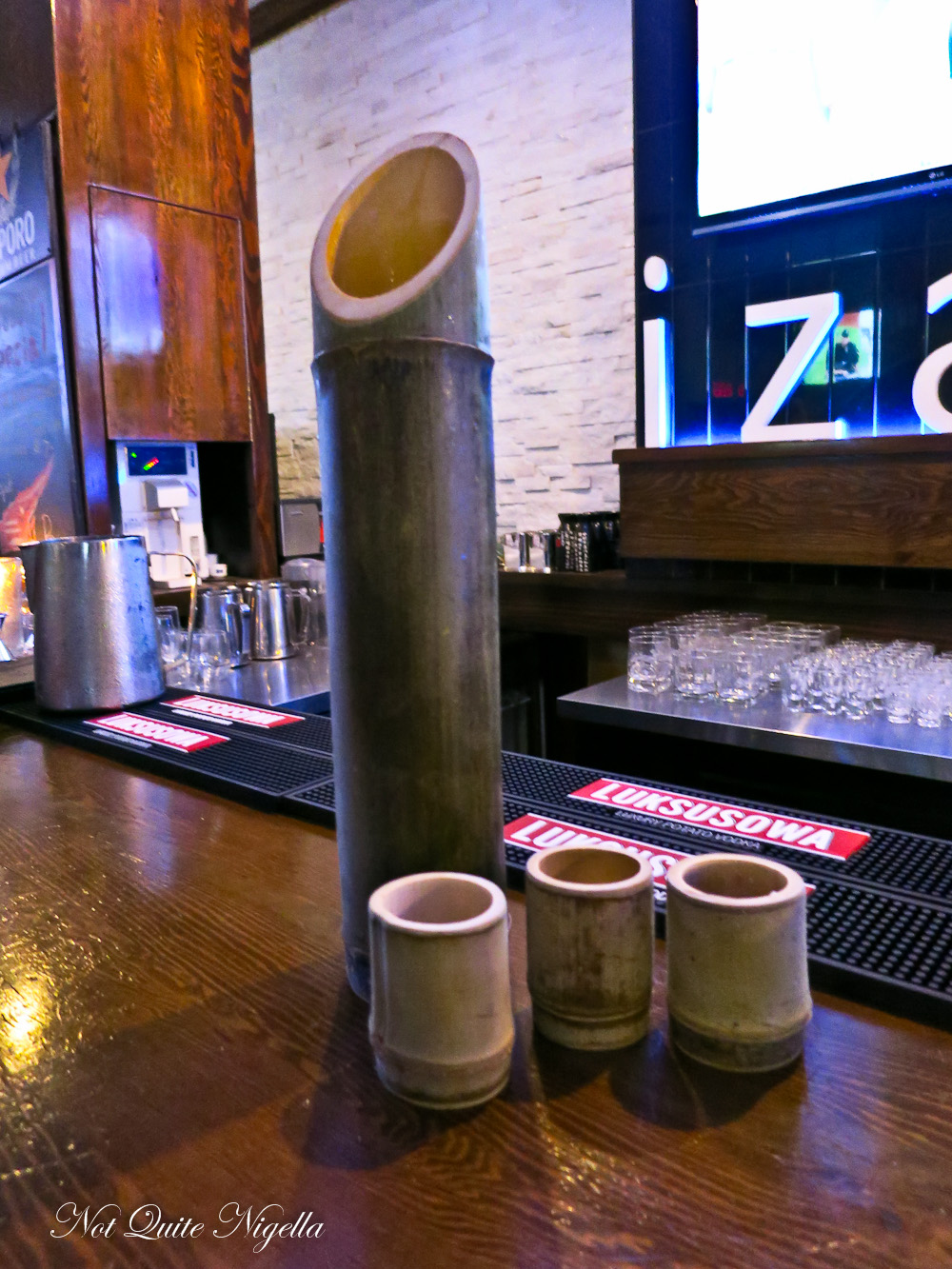 Mackenzie Isobe from Hapa Izakaya greets Scott warmly. For his tours Scott often pays full price because he wants to make sure that he and his guests are well looked after and receive the best. Given how much we've consumed and the generous nature of the Italians we have to tread lightly here. They bring out some sake served in a frozen bamboo pourer and cups which is such a clever way to serve it. The sake is from California and we enjoy drinking from the bamboo cups and using the frozen pourer. 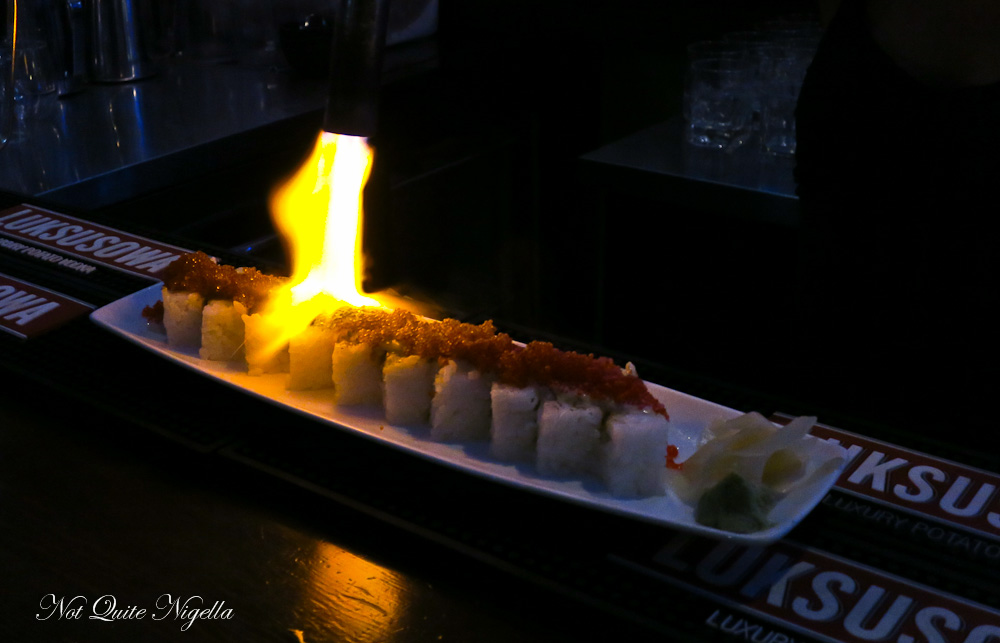 The sushi is brought to the bar where a waitress fires up a blowtorch and torches it before sliding it across. It's albacore tuna, cucumber, tempura flakes, tobiko and spicy mayonnaise. I would have loved it a bit more crispy from torching but the flavours are great. 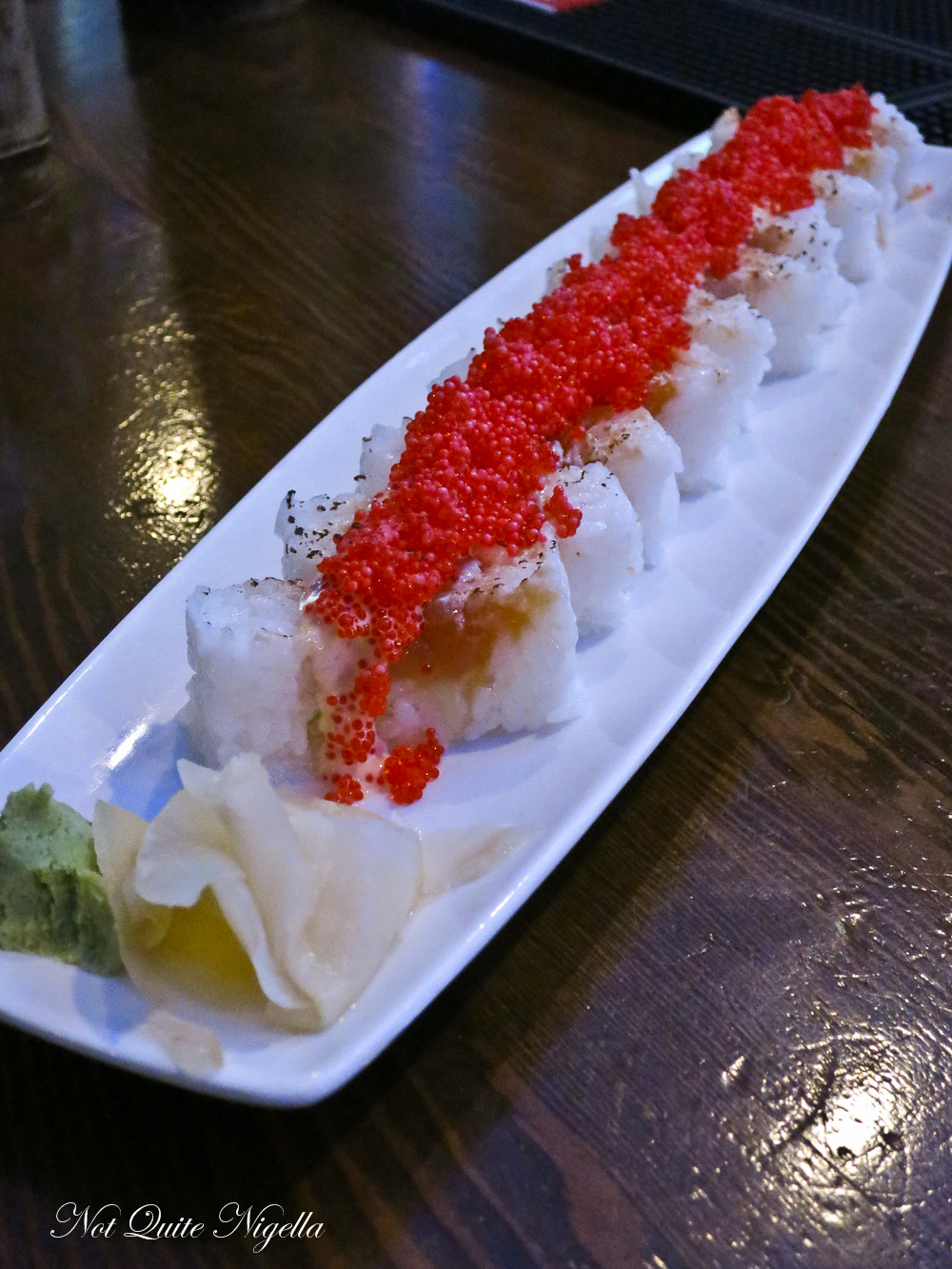 Scott leans in and tells us about the history of this restaurant's location. About two decades ago it was a restaurant called Coco Lezzone. One evening someone forgot to shut the back door and in burst a gunman and there was a gangland style shooting here - the owner was shot in the back. 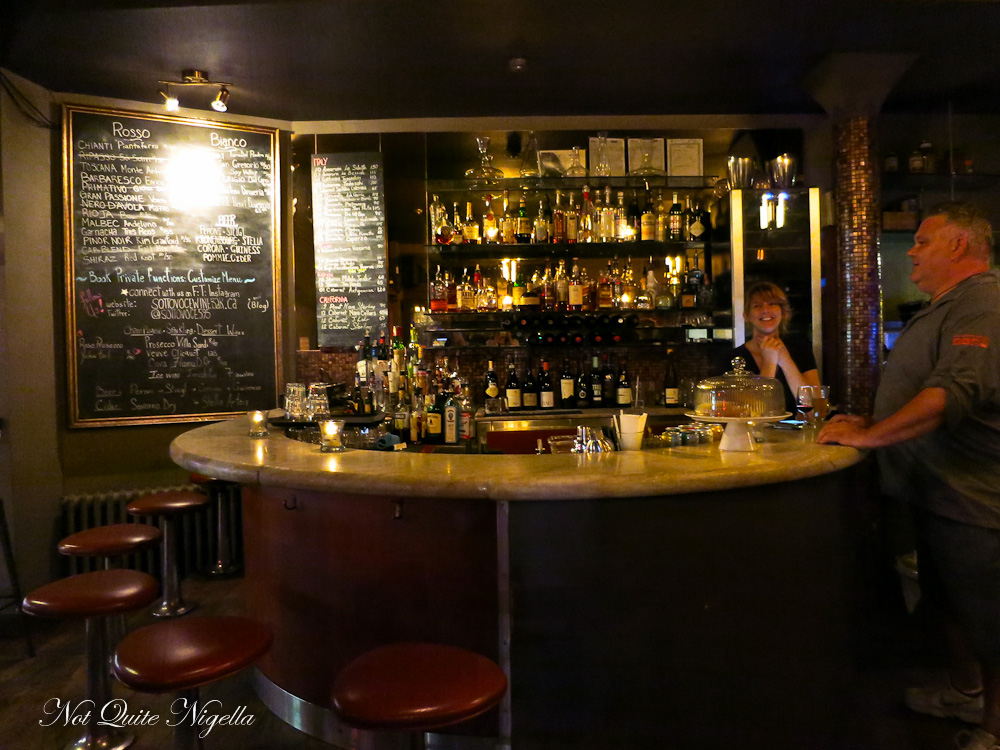 Our last stop is coming up and it's at Sotto Voce. By now I'm absolutely stuffed and some of Scott's bravado about eating has disappeared. My lack of appetite is a shame because there is so much food on this tour that I wanted to eat. 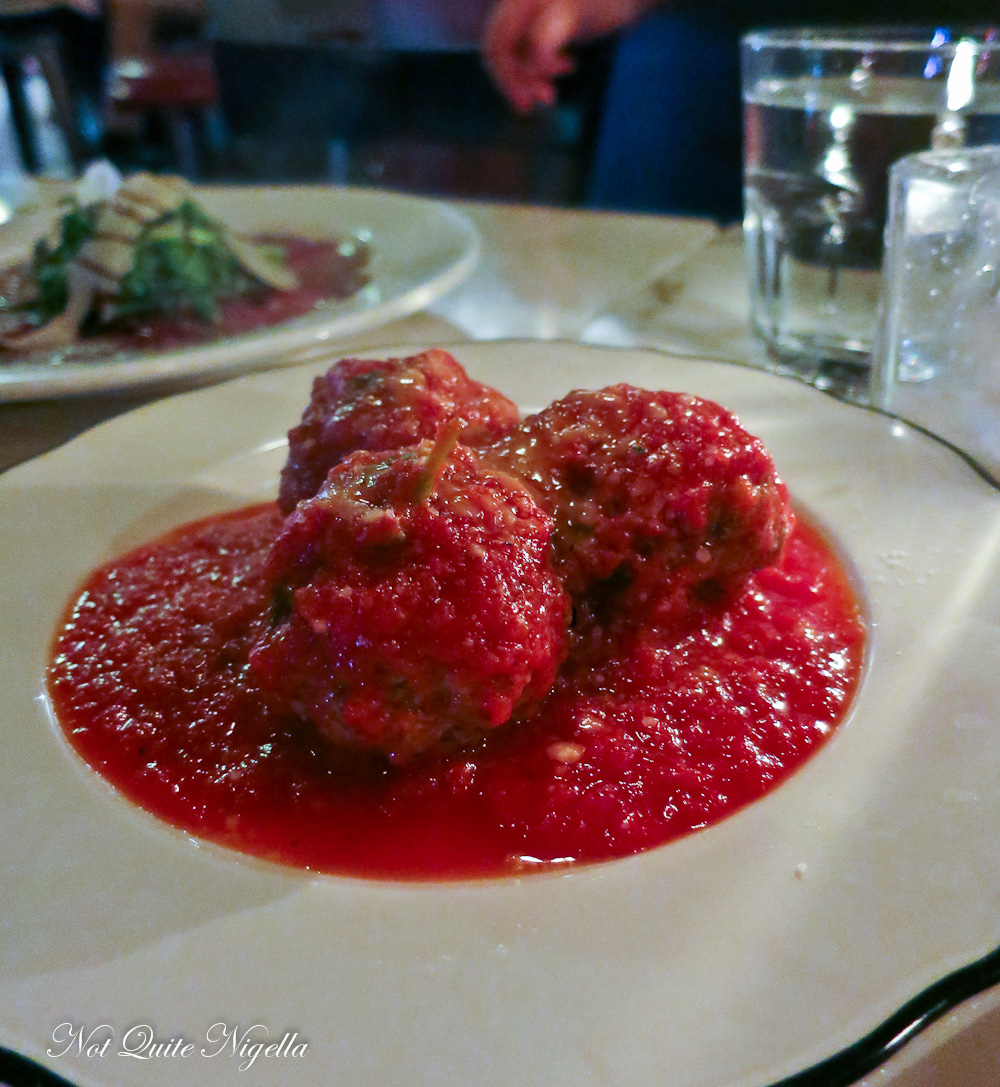 Two courses are set down and there are Sicilian meatballs made with pine nut and raisins (the recipe is a closely guarded secret). Next to this is a beef tenderloin carpaccio with parmesan and rocket and balsamic. 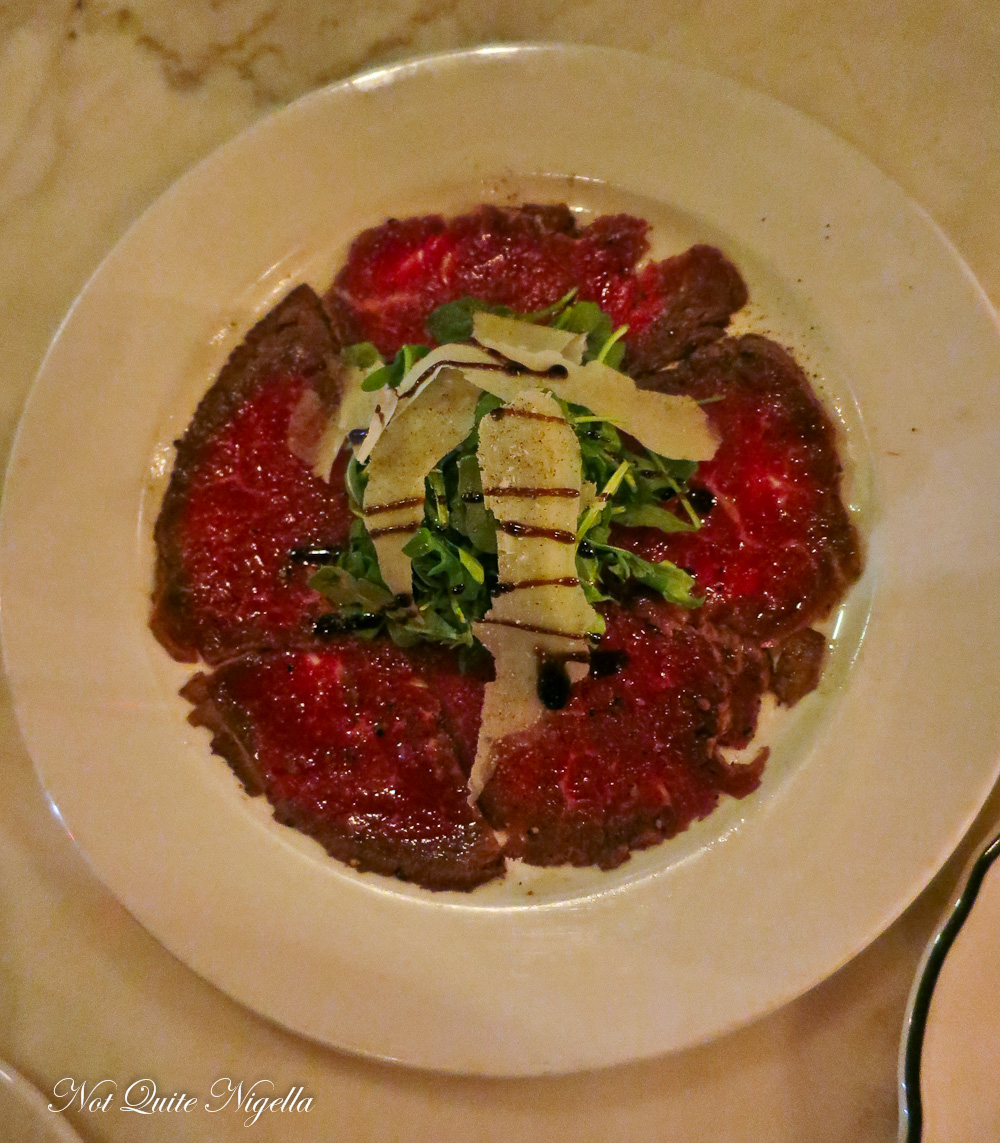 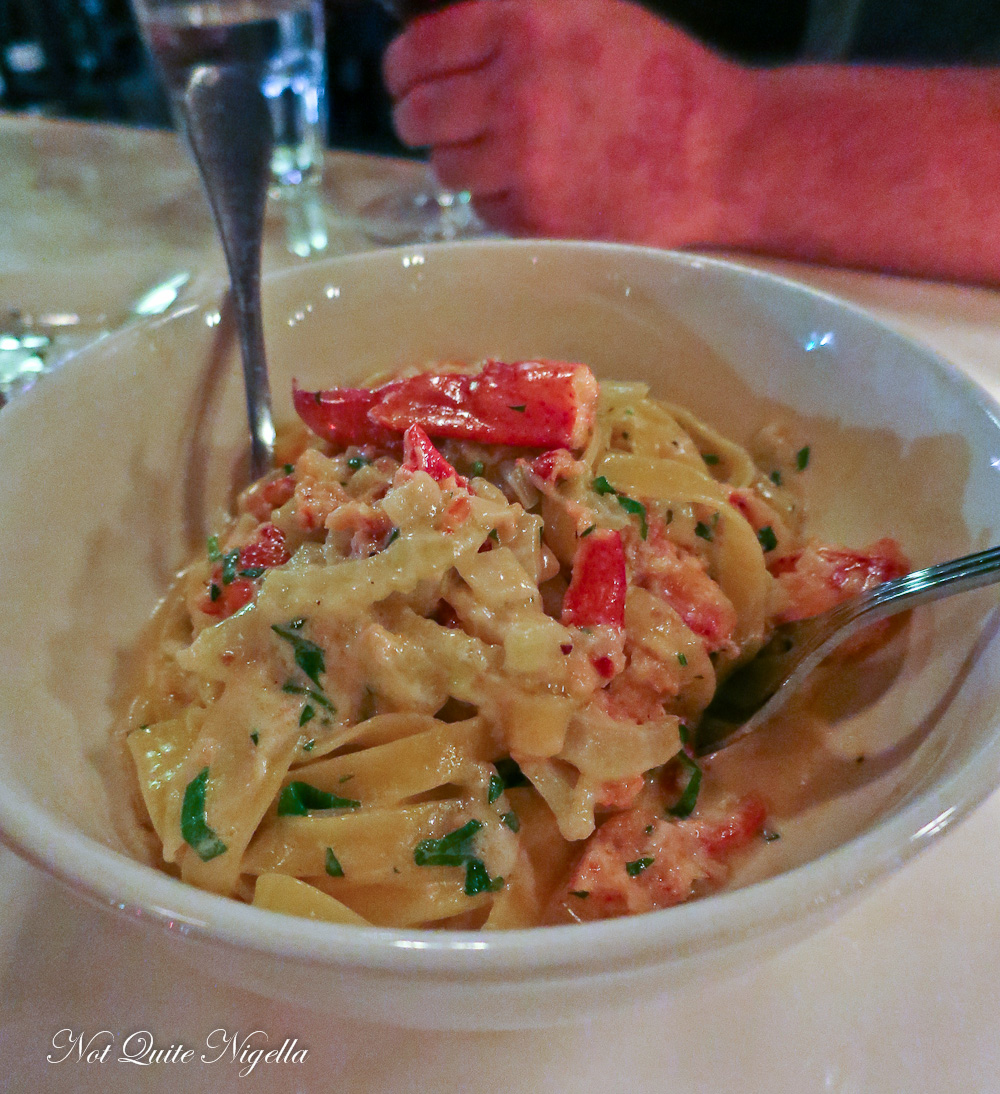 Then comes out some home made pasta with Nova Scotian lobster and a brandy cream sauce. This is very good and I find it hard to resist. And then the lamb cutlets arrive done medium rare on a bed of rampini. It's all we can do to raise a cutlet to our waiting mouths to bite on a juicy morsels of it. Oh the shame to not be able to devour it all! 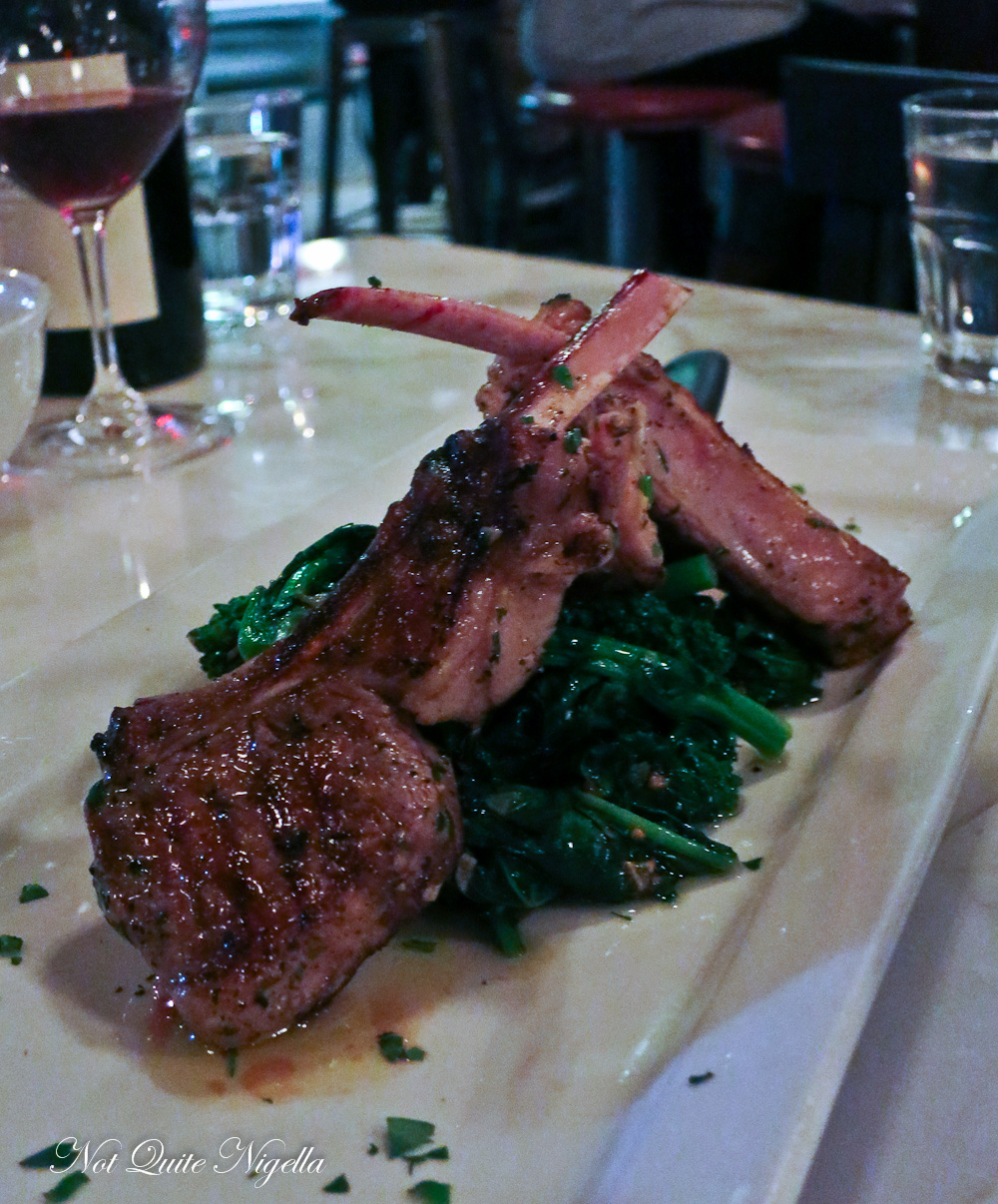 So how does Scott come across his hotspots? He is a Little Italy local and lives a few hundred metres away from all the action. Also chefs talk. "I'm a chef, we're a band of brothers," he explains. "I also eat out every day of the week and eat at home maybe three times a month. When I'm not doing tours we are sampling different restaurants."

So tell me Dear Reader, have you ever licked a plate clean and if so, what was on it? And have you ever had so much food on a food tour that you couldn't eat it all? Which stop appealed to you the most?

NQN visited Canada as a guest of the Canadian Tourism Commission and Ontario Tourism.