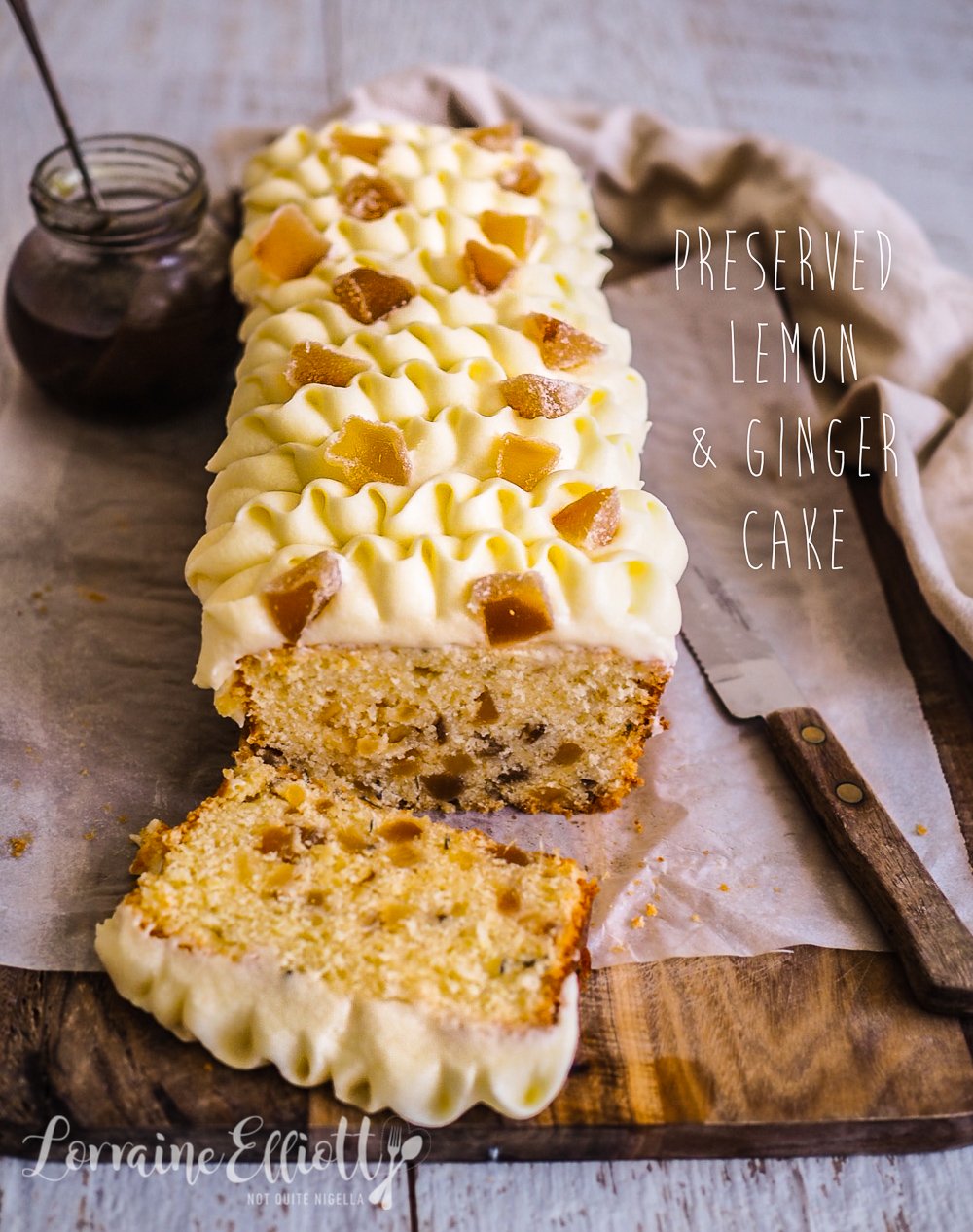 There it was staring at me every time I looked in the fridge: a jar of preserved lemons. From the jar there were only a couple of pieces missing. "I'll come for you soon," I said to them every time I saw them but I never did and there they sat, unloved. And then it came to me. Instead of a tagine or a savoury dish which I'd normally use them in, I'd instead make a preserved lemon cake!

Preserved lemons are salty, lemony beasts (as you'd expect). They also have a distinct flavour and aroma. What would go well with them? I added candied ginger and rosemary, just because I thought that they may be compatible. 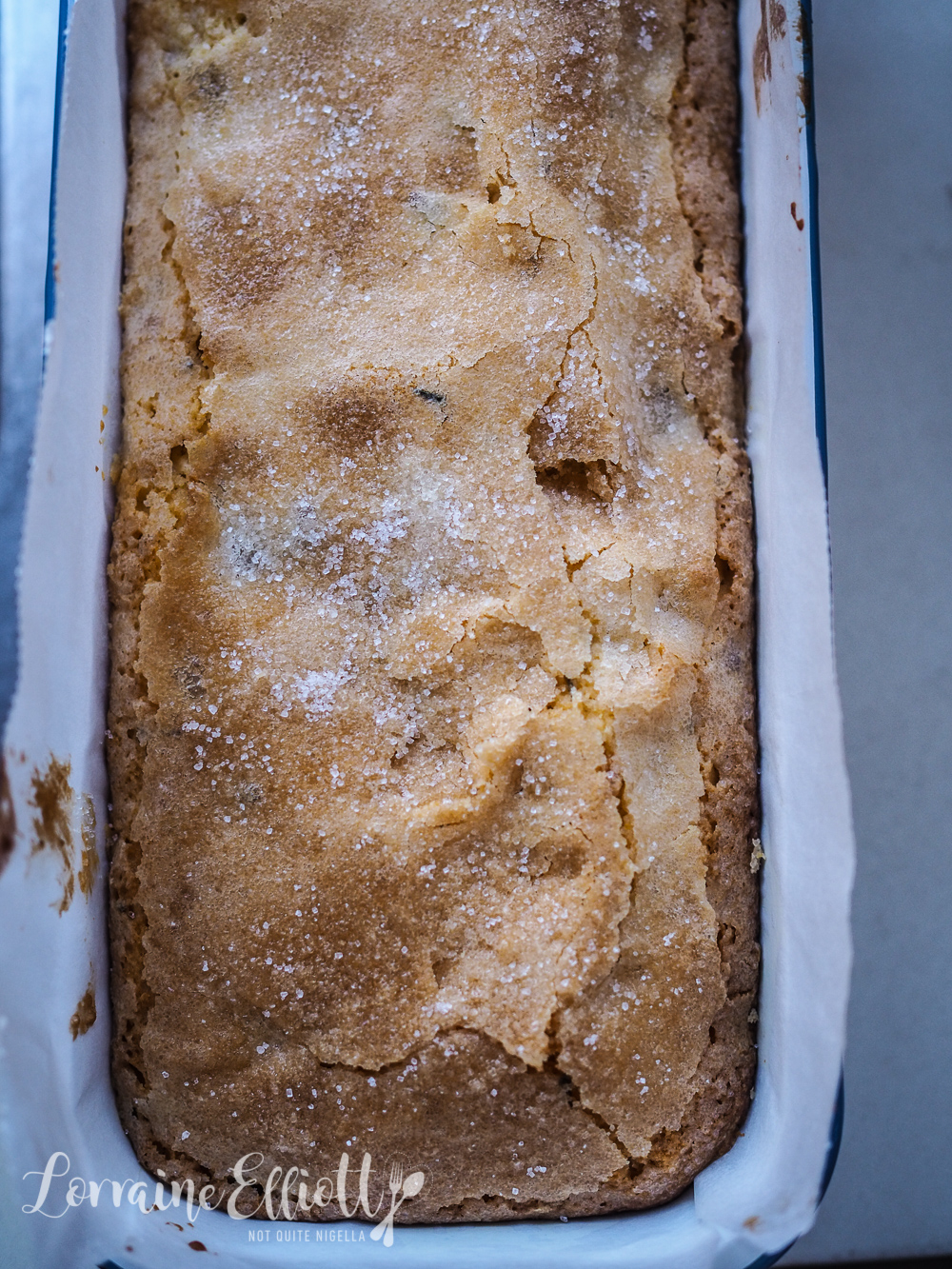 With a sugar crackle crust

And that Dear Reader is how I baked one of my favourite cakes. If you don't want to do the icing, leave it sprinkled with sugar-it's rather magical and the crunchy crackled top is an absolute treat. But if you want to make it a bit pretty the lemony cream cheese icing with ginger is perfect and gave me the chance to use a piping tip I had always wanted to use. 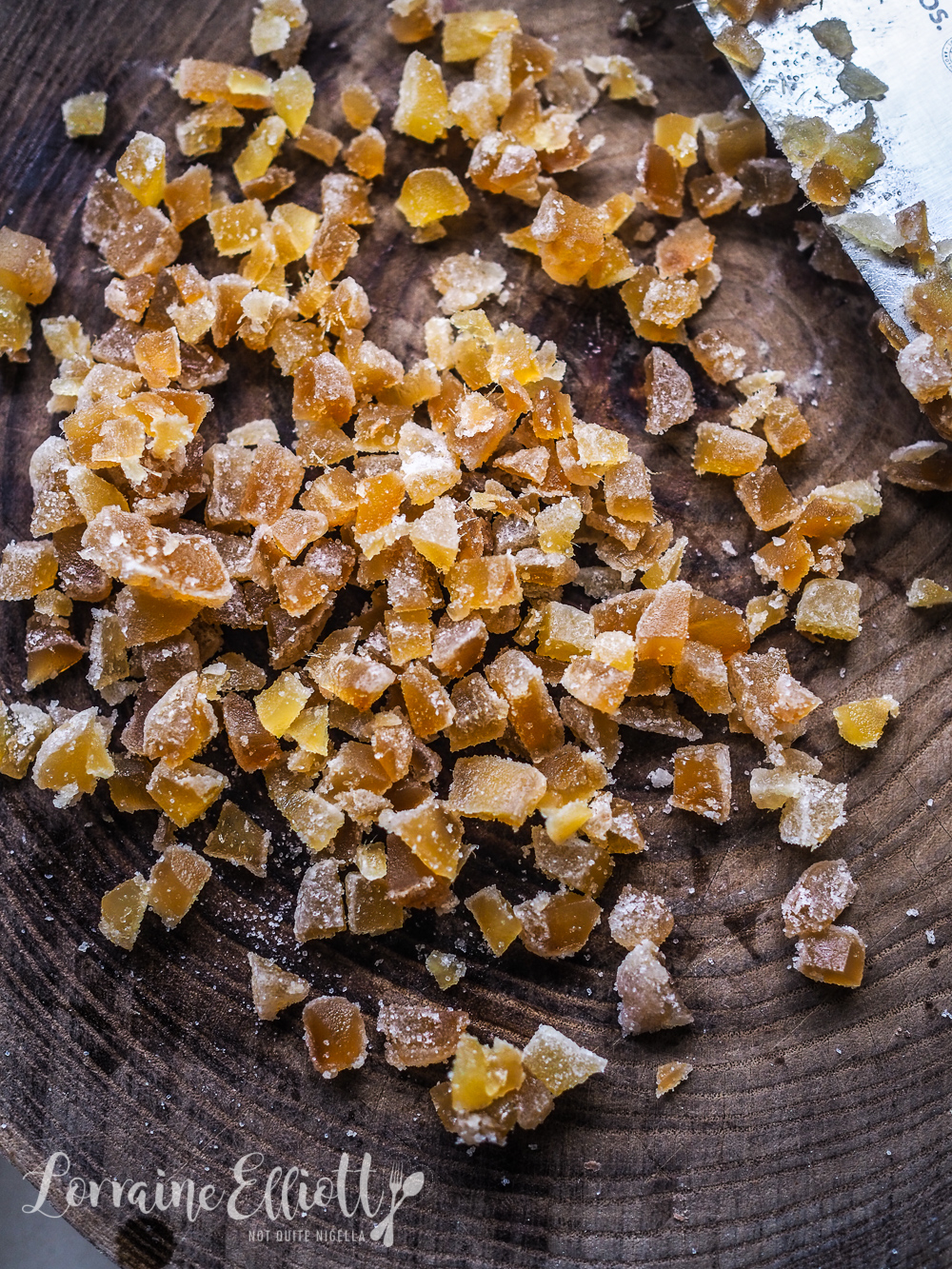 I made this cake as a thank you to the lovely couple that look after Mochi. They are quite besotted by her and I don't blame them as she is such a lovely, calm affectionate dog. One weekend there was a miscommunication as they thought they were looking after her for two nights but because I'm 100% sure that Mr NQN doesn't listen, he didn't tell them that it was just one night.

I thought that giving them cake might make things a bit better. I also appreciate that they love looking after her because it means that we can eat dinner without having to rush to pick her up (my mother goes to sleep at 8:30pm which always means a rushed dinner) and we can also do things like go and see movies.

We went to see a movie on the day that I iced this cake and gave it to them. I'm a huge fan of the band Queen and I was waiting eagerly for the new biopic called Bohemian Rhapsody to come out in theatres. The critic reviews ranged from disappointed to tepid but then reviews from my friends flowed through shortly after it came out and they raved about it. I value my friend's opinions more than that of a stranger so we went to see it. 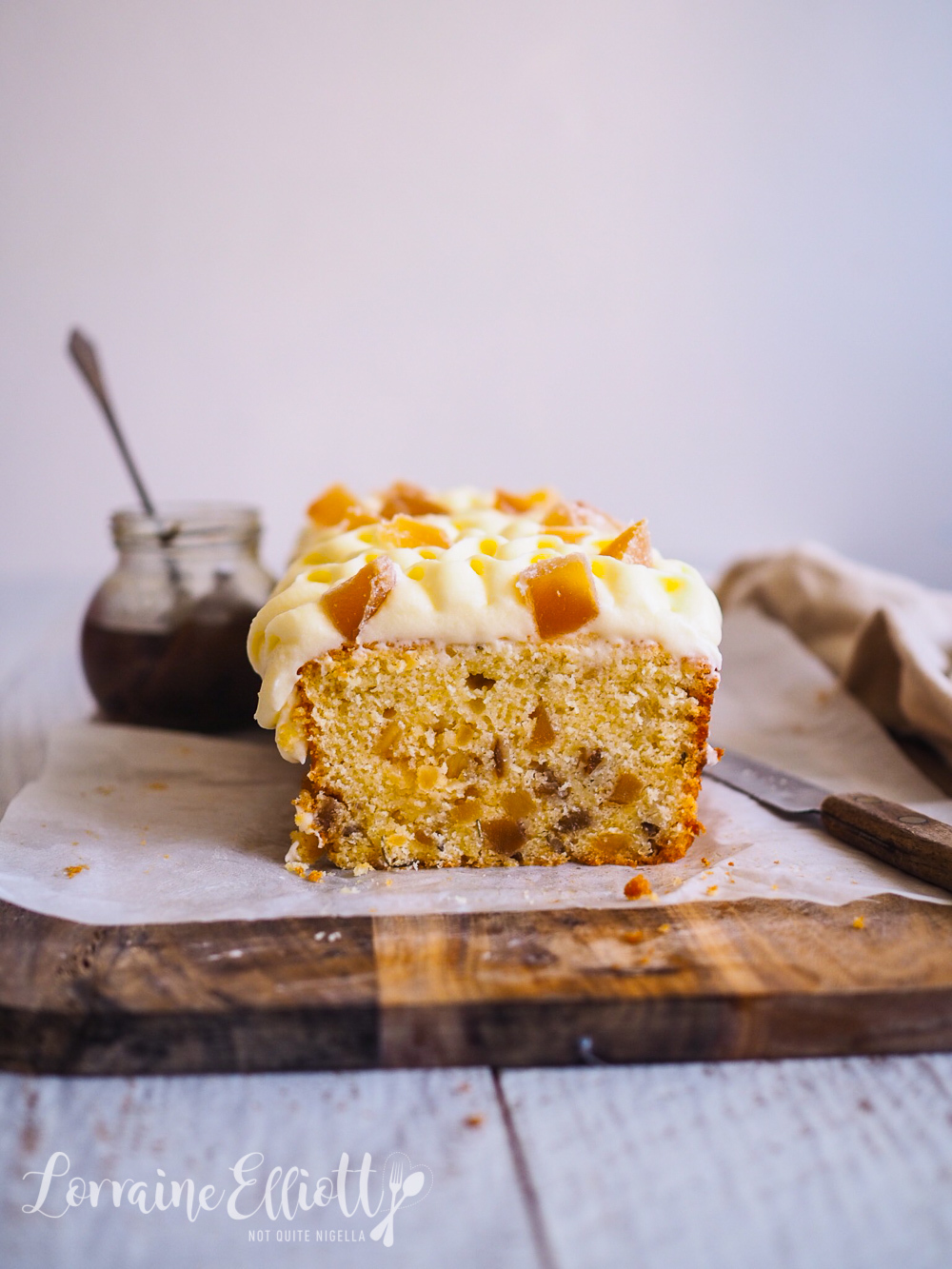 I have no idea what those critics were on, maybe they were Queen haters, maybe they were universally having a bad week but I loved the movie and it was my favourite movie of the year. It is a great movie with the best soundtrack. They chose all of my favourite songs and everyone was so perfectly cast it was eerie.

Some criticised it saying that they didn't delve enough into Freddie Mercury's personal life but I disagree, they definitely included a lot and I also don't think his personal life and sexuality defined him at all, his talent did. Also in a funny twist, during Queen's heyday a lot of critics didn't like them either but they were hugely popular with fans so history repeats itself.

I sang along to every song (apologies to those sitting next to me) and cried my eyes out at the end. Even Mr NQN who didn't have a television growing up (have I mentioned that?) so wasn't familiar, loved it. And when we left a couple of women got into the elevator with us. "You're a bit young to like Queen, that's not your vintage" one woman said to us but we said that the music transcended any age (also there were loads of kids in the theatre). 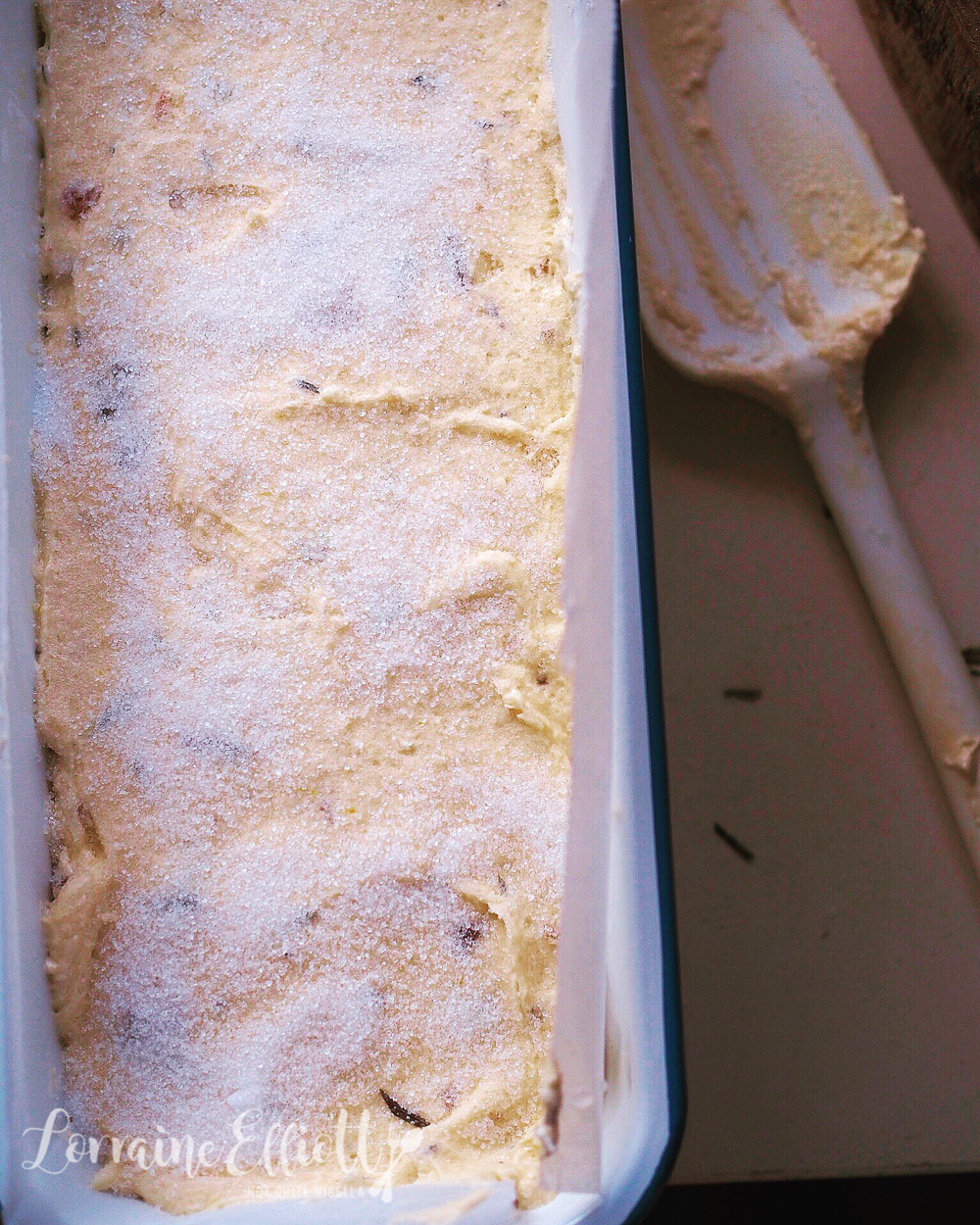 We were walking the same way to the car park and were talking about it and she let me know that there was a documentary on them that evening which we hurried home for. And we ate a slice of this cake while watching it with Mochi at our side. A perfect Sunday spent.

So tell me Dear Reader, are you a Queen fan? What is your favourite movie this year? And do you have a jar of preserved lemon that you can't seem to use up quickly enough?

Step 1 - Line a loaf tin on the base and sides with parchment and preheat oven to 150C/300F. Beat the butter and sugar together for 5-6 minutes or until pale and fluffy. Add eggs in one at a time beating well between additions. 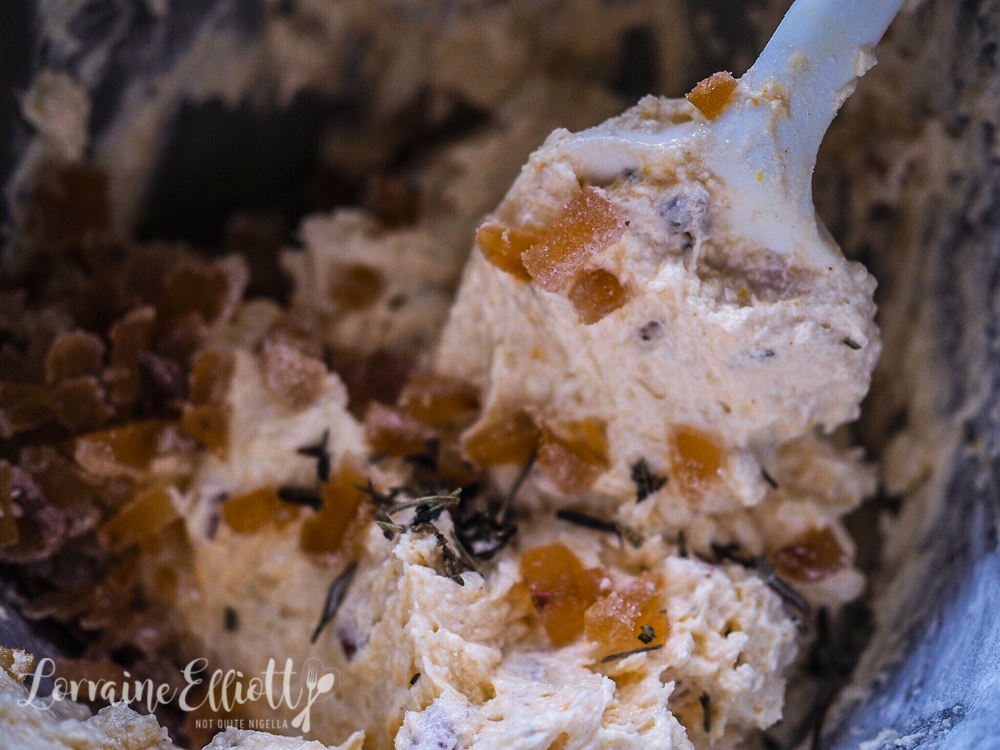 Step 2 - In a jug whisk the flour, baking powder and ground ginger. Add in the crystallised ginger, lemon peel and rosemary and toss so that the pieces are coated in flour (this prevents the pieces from sinking to the bottom of the cake). Fold the flour mixture into the butter mixture alternating with the buttermilk and mix until just combined. Scoop into the prepared tin and sprinkle white sugar on top (you can omit this if you are icing it with cream cheese icing). Bake for 1 hour 15 minutes or until the centre springs back to the touch. Cool in the tin. 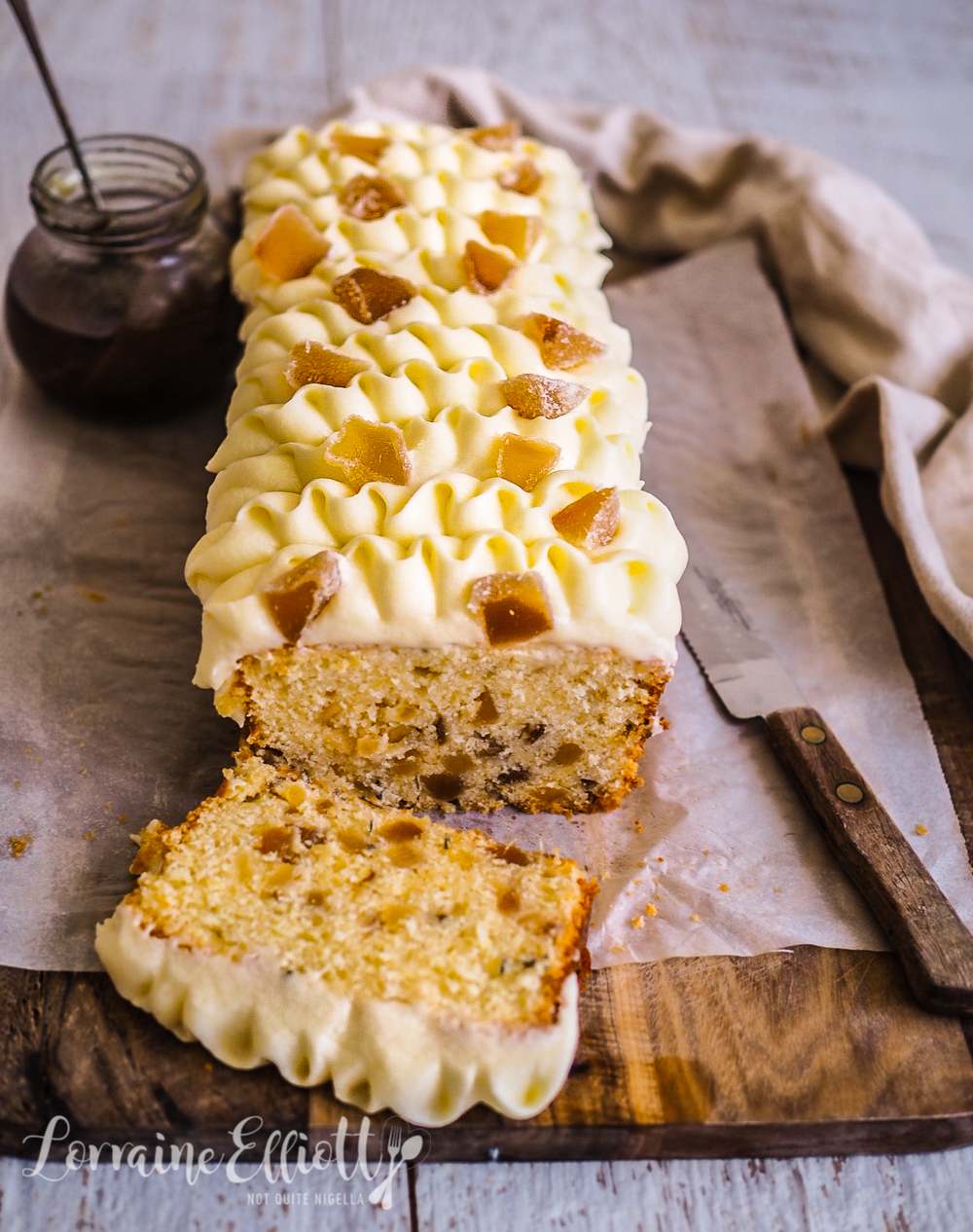 Step 3 - To make the frosting, beat the cream cheese and butter together until smooth-around 1 minute or so if ingredients are at room temperature. Add in the icing sugar on low speed and then once mixed increase and add lemon juice and beat until smooth. This mix will be quite wet but will firm up on cooling. Take a #125 piping tip and fit it into a piping bag and then pipe patterns on top of the completely cooled cake (tip: have the larger side of the teardrop facing down). I find it easier to practice it on a plate (you can always scrape it up from the plate and put the frosting back in the piping bag) and once I get the hang of it, do it on the cake. Top with ginger pieces.