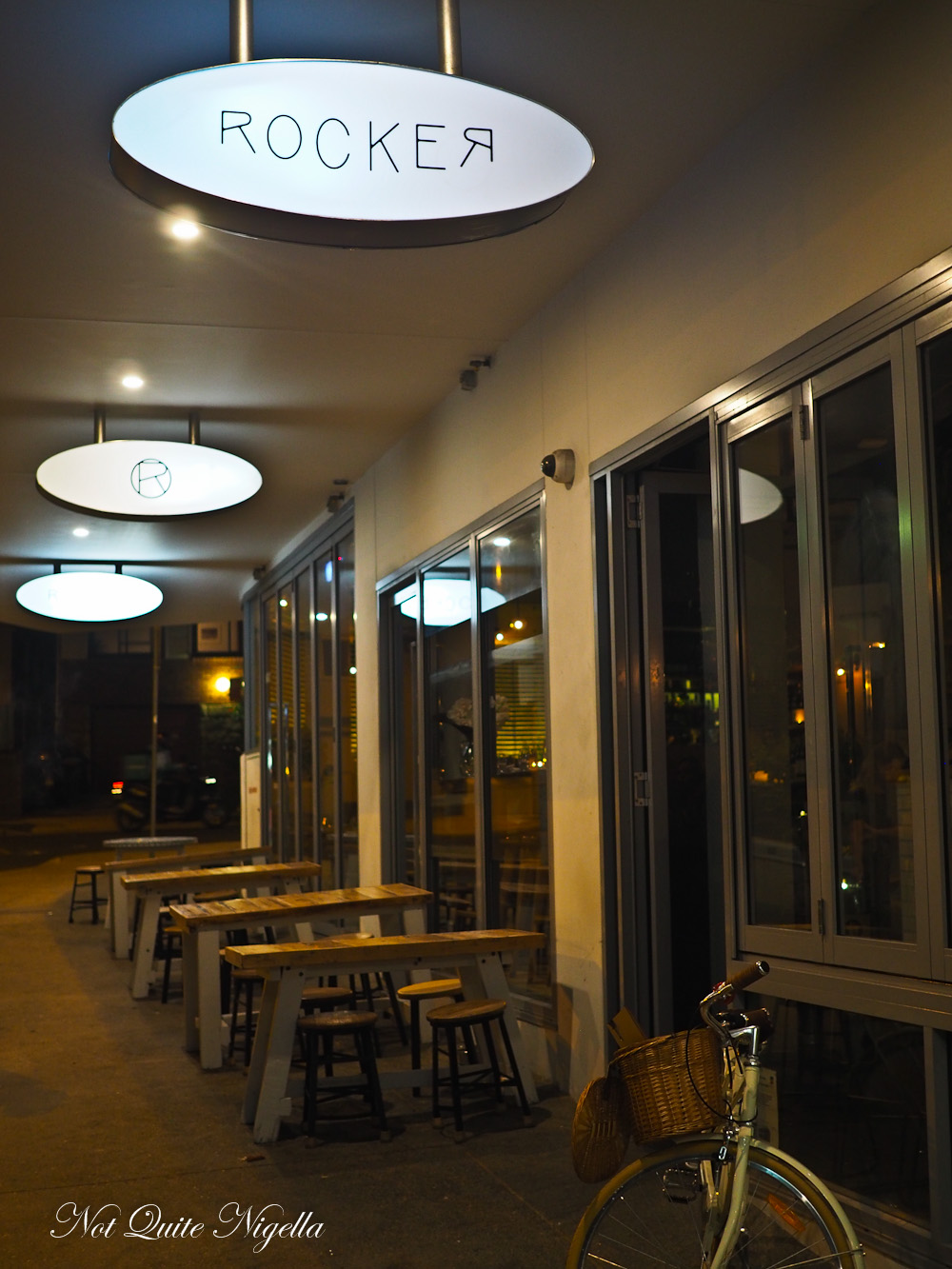 Rocker is the latest restaurant from Darren Robertson of Three Blue Ducks and Cameron Northway. Named after the bottom curve of a surfboard it is a departure from the Three Blue Ducks offering. So what is it like?

Confession time: sometimes I contact a restaurant to see what sort of climate control they have. For instance, before dinner at Rocker in Bondi, Nina and I were discussing what to wear. We both love dressing up but being winter we didn't want to get too cold. So I contacted them and they assured us that it was warm and toasty. 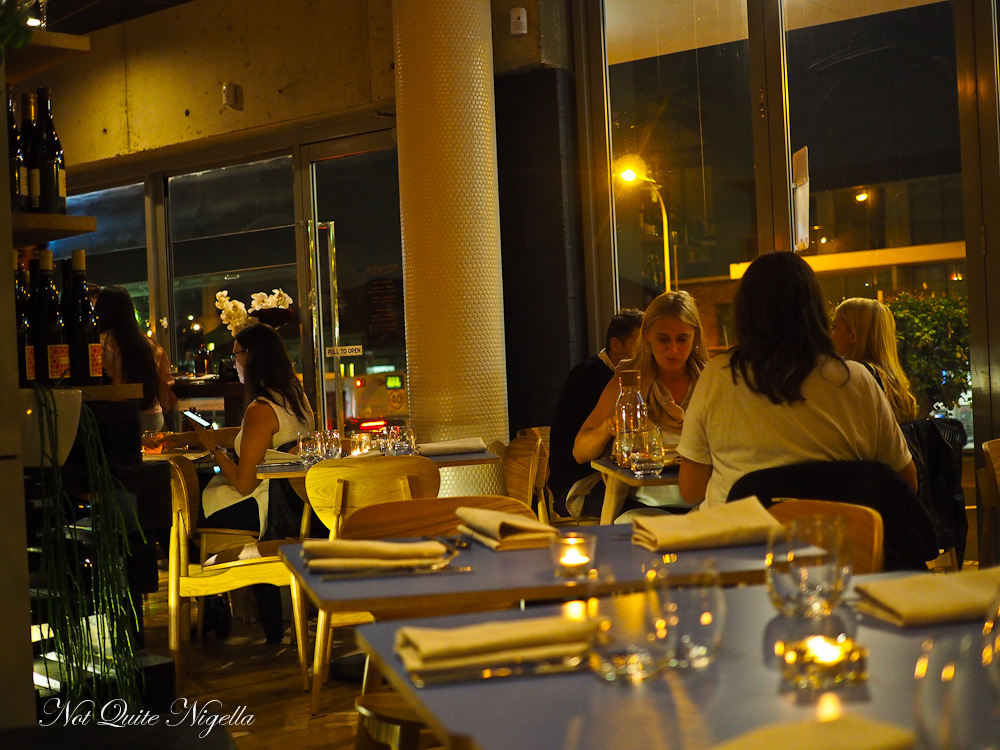 "I'll come as either Darth Vadar or a prostitute," says Nina when I ask her about what she is wearing to dinner. "I'm going as a normal person, how disappointing in comparison," I say.

Rocker is located on Campbell Parade in Bondi Beach or more specifically North Bondi. It's actually not what we envisaged-I think we were expecting something a bit gorgeously rustic and creative a la Three Blue Ducks or something a bit Bondi (healthy, colourful). This is a sleek and pared down space with smallish share style serves. Prices are reasonable to attract local clientele. 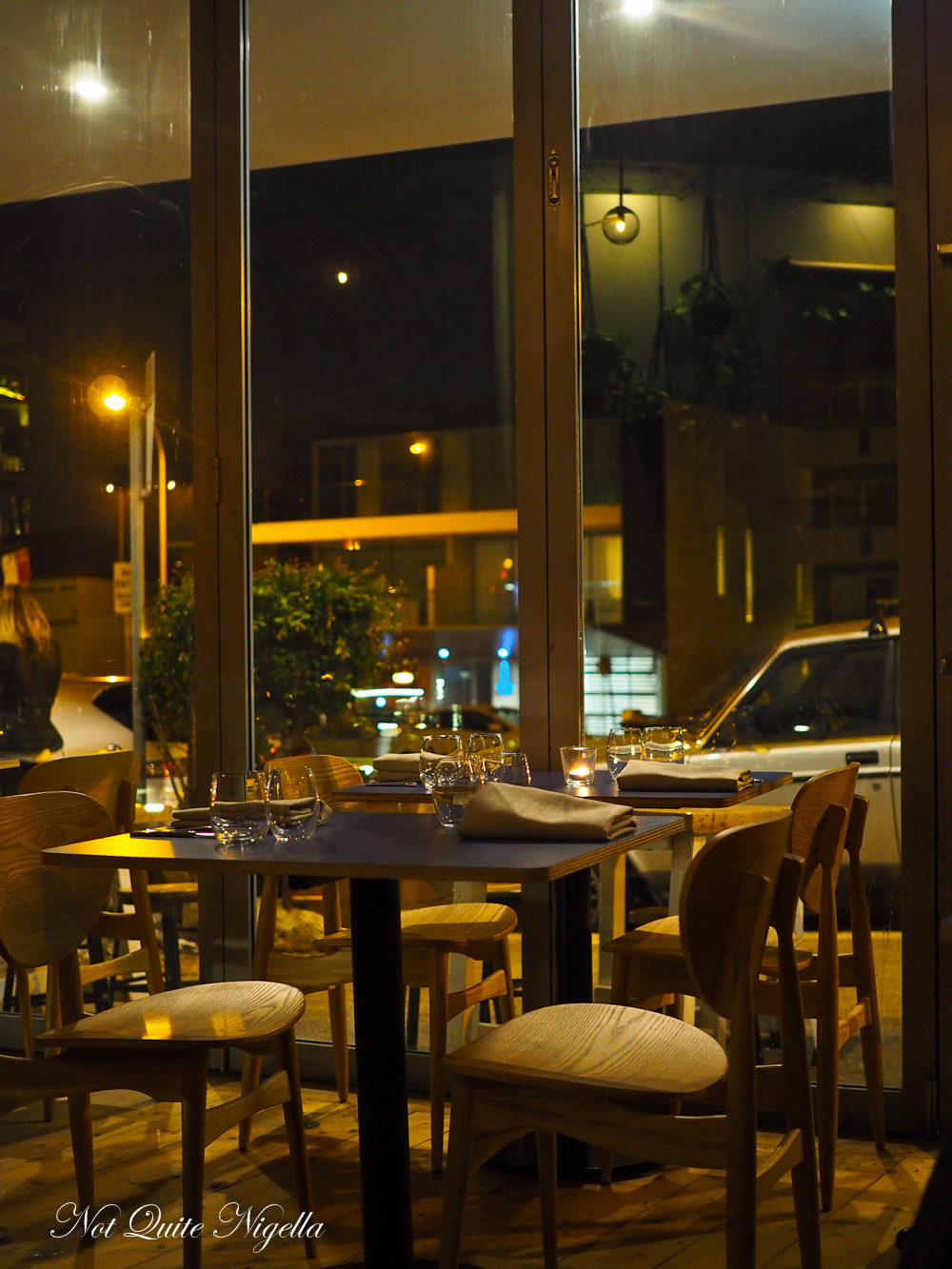 Vegetarian Nina (who is dressed as neither a prostitute or Darth Vader) has a few things to order on the menu but she isn't impressed with the vegetarian pasta offering of macaroni with pumpkin and burnt butter. "I feel as though this is the vegetarian dish on offer everywhere". She slightly baulks when she reads the macaroni shape described as "Little elbows" and asks,"Whose elbows are these?". She is picturing animal elbows!

Garth and Mr NQN loathe choosing food so I happily do so for the three of us. We settle on some snacks, some smalls (entrees) and some bigs (mains) to share while Nina orders her own things. 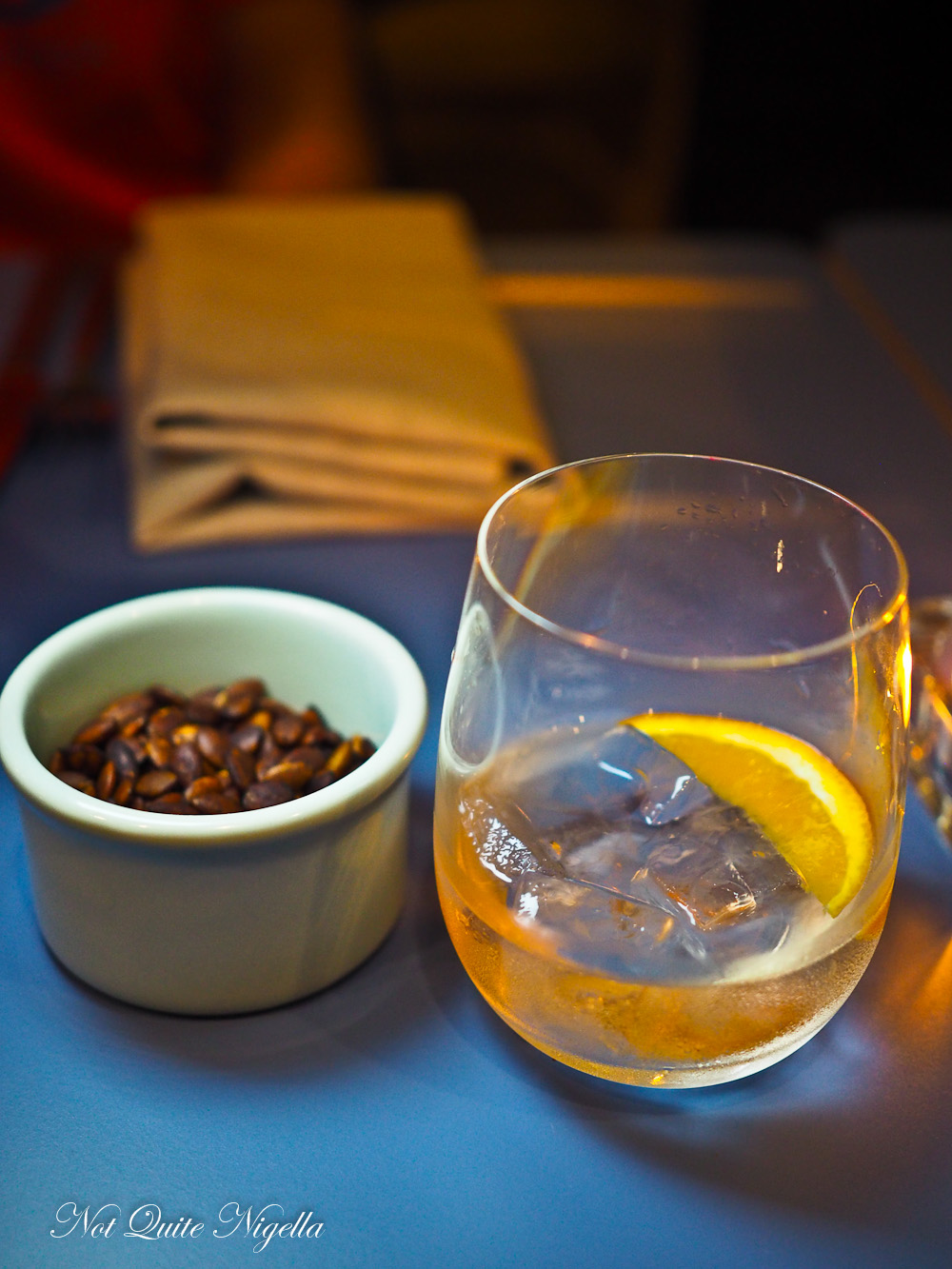 They bring out some seasoned roasted pumpkin seeds which are quite moreish and go well with the wine and the aperitif, a Regal Rouge lively rose vermouth with ice and pink grapefruit. 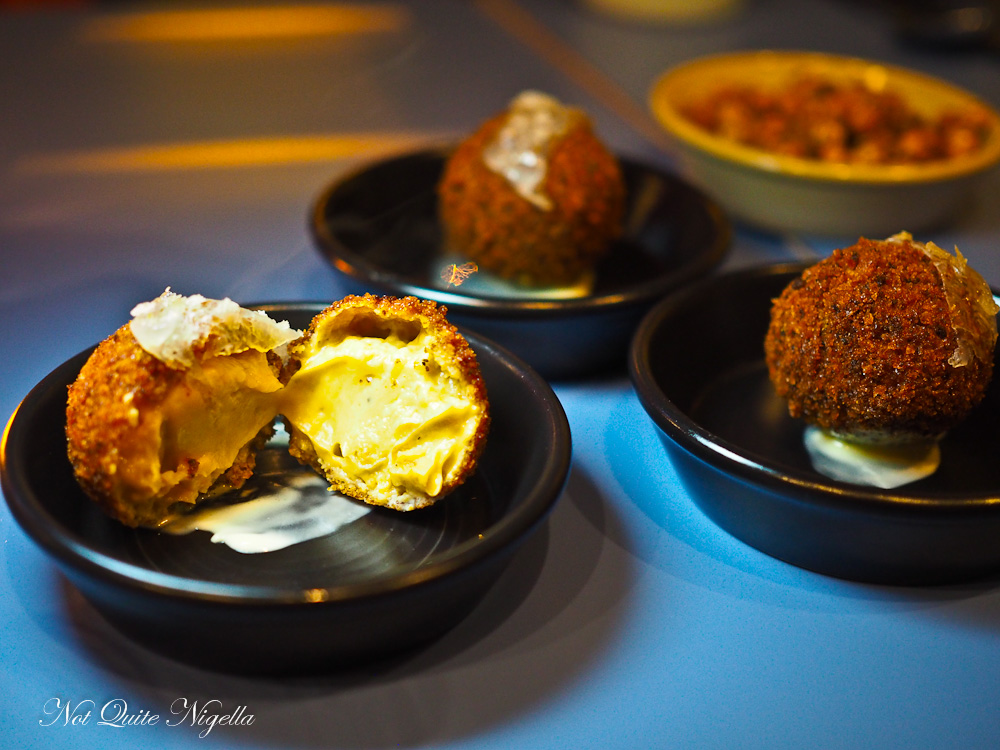 Welsh Rarebit and Lardo $3 each

I didn't quite expect Welsh rarebit to take the form of a crumbed, deep fried ball but there it was with a slice of lardo (cured pork fat) on top. It's pretty good the creamy cheese inside tasting just like Welsh rarebit with a hit of mustardy goodness. The lardo is nice although it doesn't go very far. 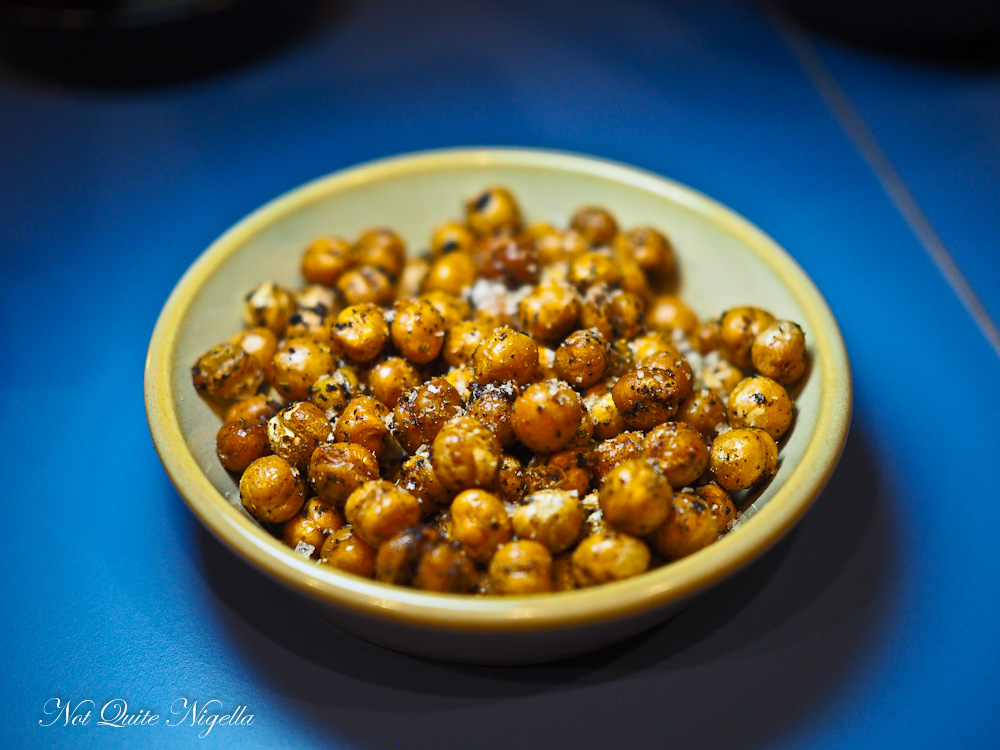 This was for Nina, some super crunchy chickpeas and native salt. 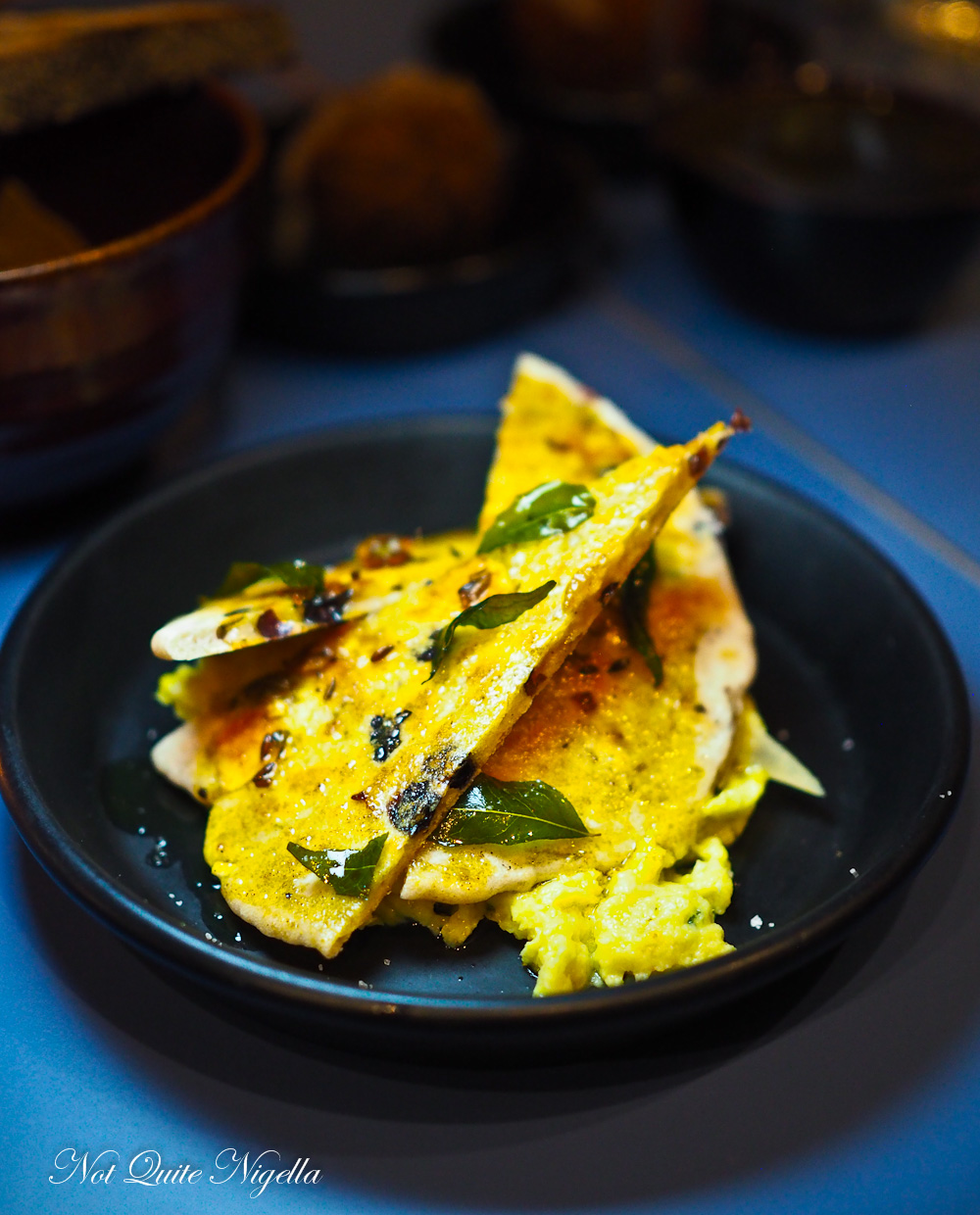 There are three slices of potato flat bread with a serve of salt cod brandade with turmeric and curry leaves. I didn't mind this although I didn't really go for more of this. 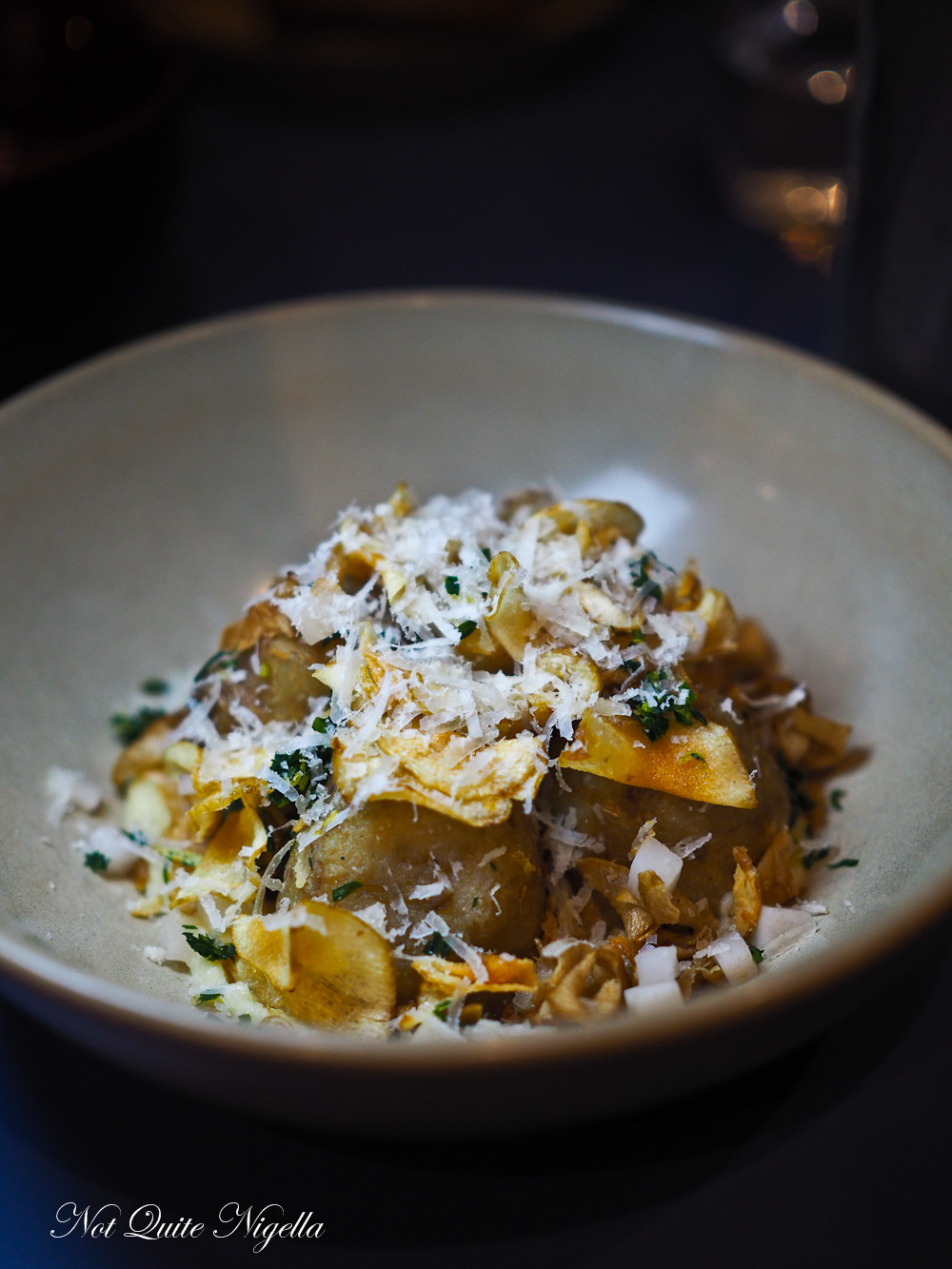 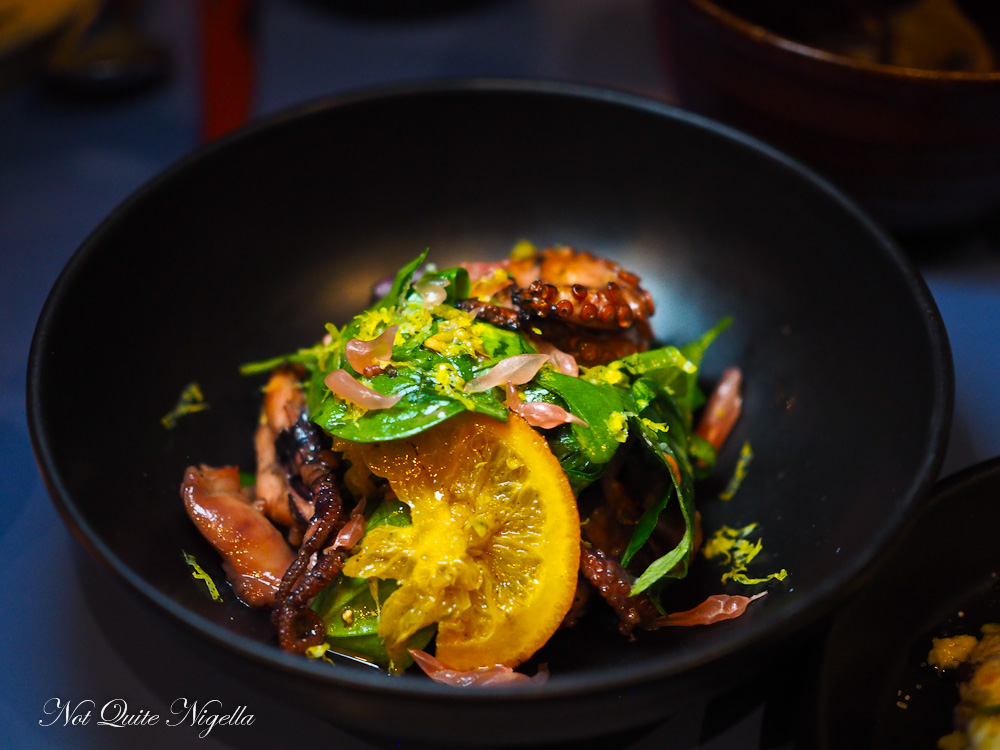 The baby octopus is a little chewy but the flavours are fresh and clean in this dish with creme fraiche, nasturtium and preserved citrus. It is a fresh summery dish. 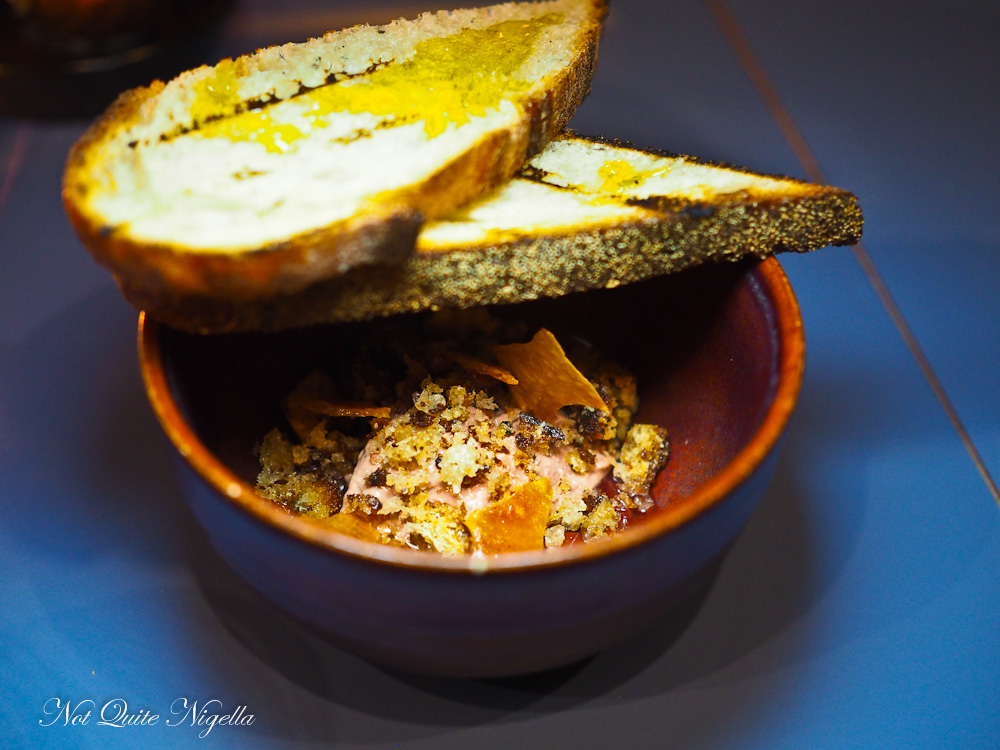 My favourite entree is the airy light parfait with rye, crunchy thin shards of chicken skin and sweet, pickled plums. This comes with two slices of grilled bread on top. 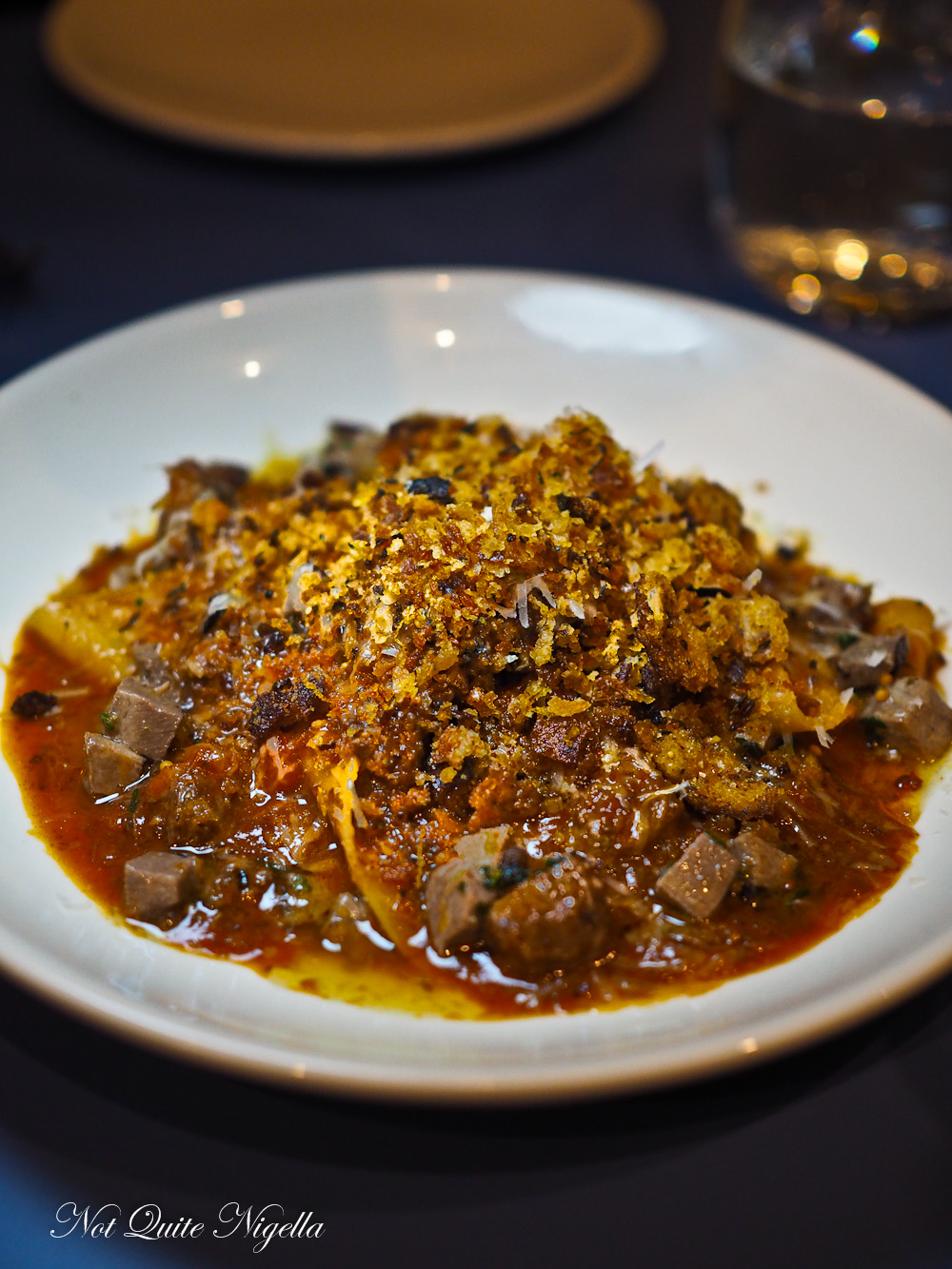 The mains menu is pasta heavy and all pastas are made in house. The pappardelle is served with so ox cheek ragu flavoured with orange and thyme. There's a generous serve of parmesan and small cubes of tender tongue as well. It's a good, warming dish. 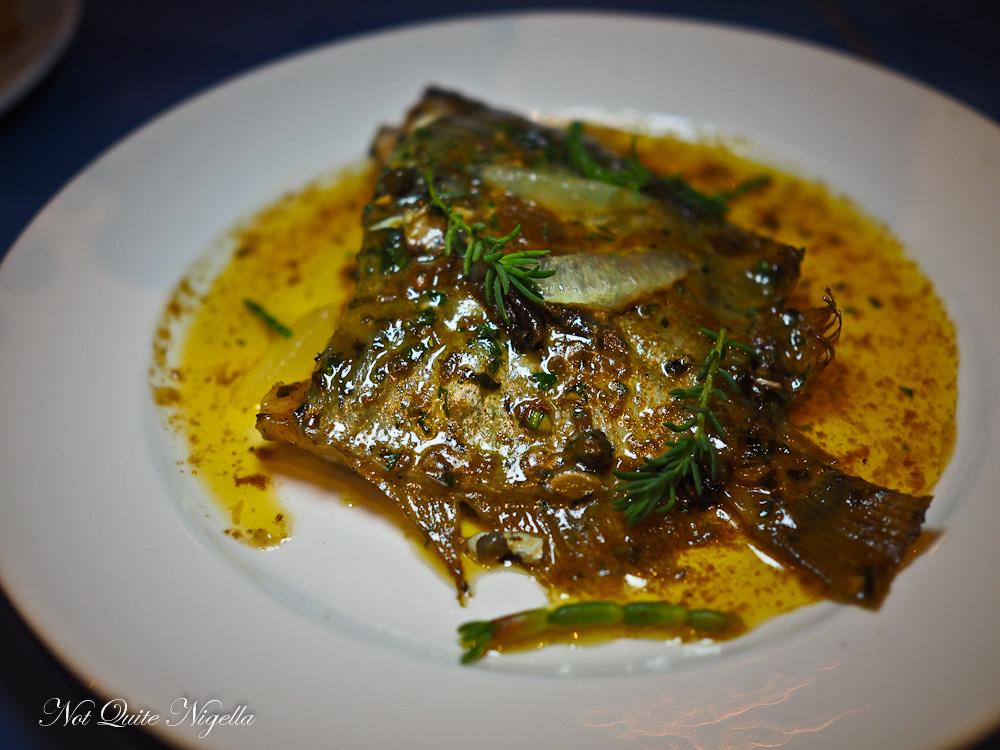 My favourite main is the John Dory served as a whole fish. Just wa warning: this is a bony fish for those who don't like to deal with bones. I don't mind bones and I do like the simple but delicious treatment this gets. The fish is so lusciously textured and benefits from a drizzle of the burnt butter and small, salt bursting sea succulents. 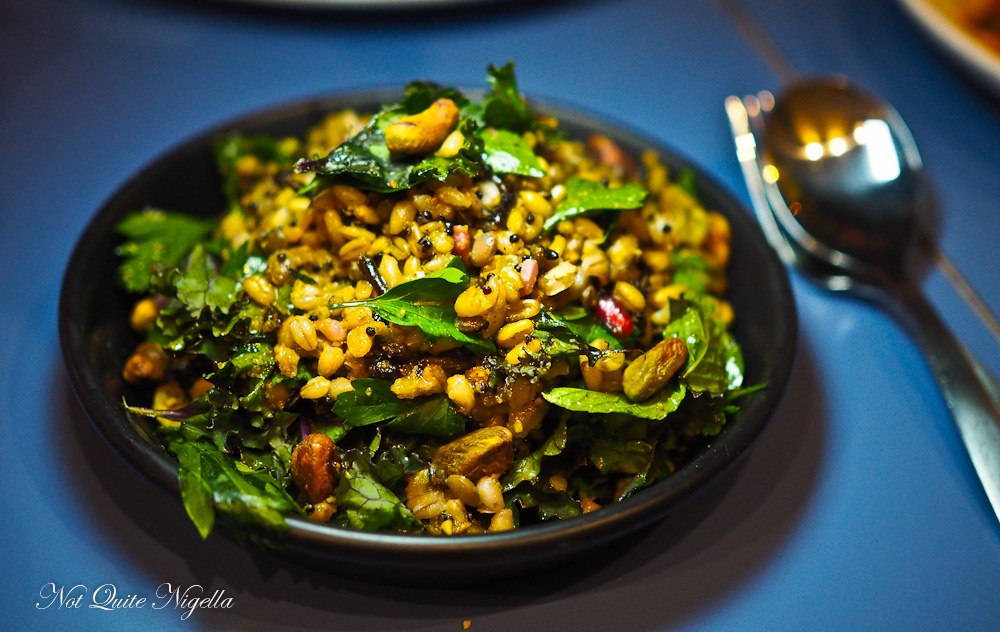 The greens and grains are a mix of around half a dozen greens and grains with the addition of currants and crunchy pistachios. This goes particularly well with the John Dory, especially when you scoop up some burnt butter to add to this side. 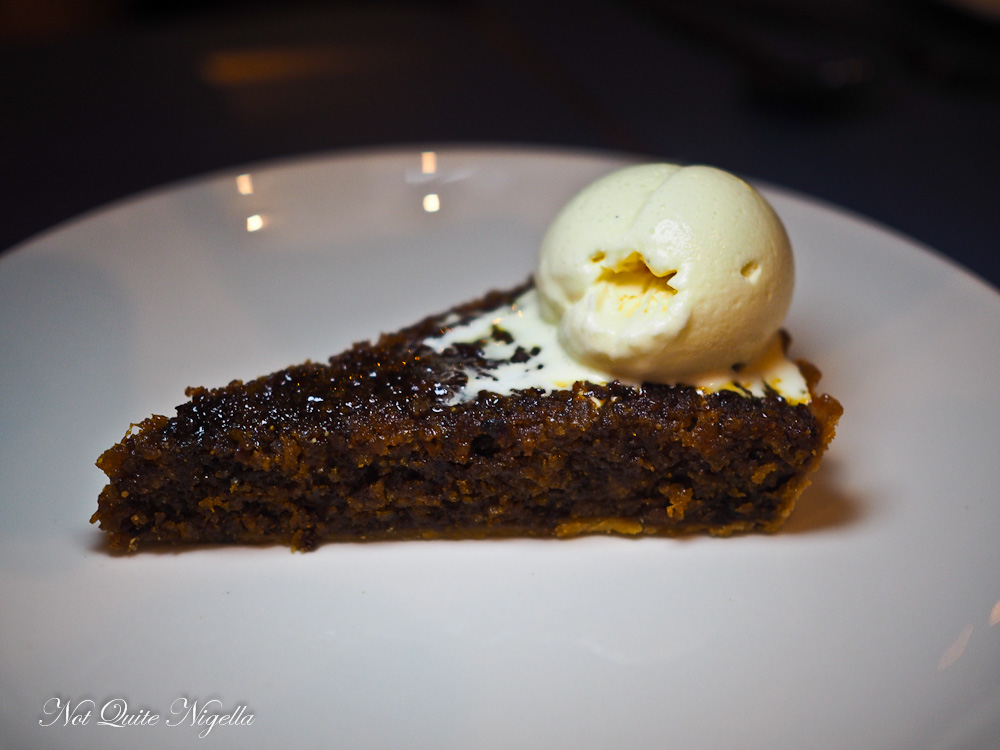 Dining out with your trainer means that when it comes to dessert she thinks that it's a good idea to share one dessert between four people. We end up ordering two as a compromise as she definitely doesn't approve of sharing three. The treacle tart with the salted rye crust tastes just like Christmas with aromatic spices and fruit mince filling. It comes with a scoop of vanilla ice cream and is served warm. 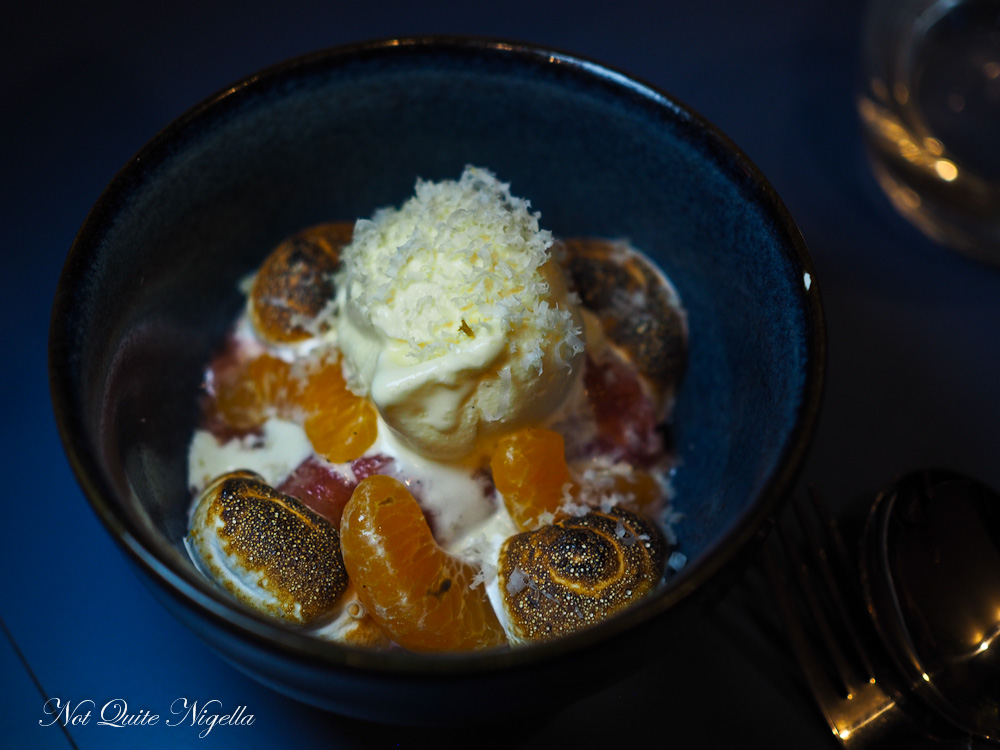 The other dessert is a cold one with dabs of burnished citrus meringue, batons of rhubarb, ice cream and mandarin segments (the latter not really needed). This is a refreshing but well balanced dessert.

So tell me Dear Reader, do you check on the climate control conditions of a place before you go? Which dishes appealed to you the most here?