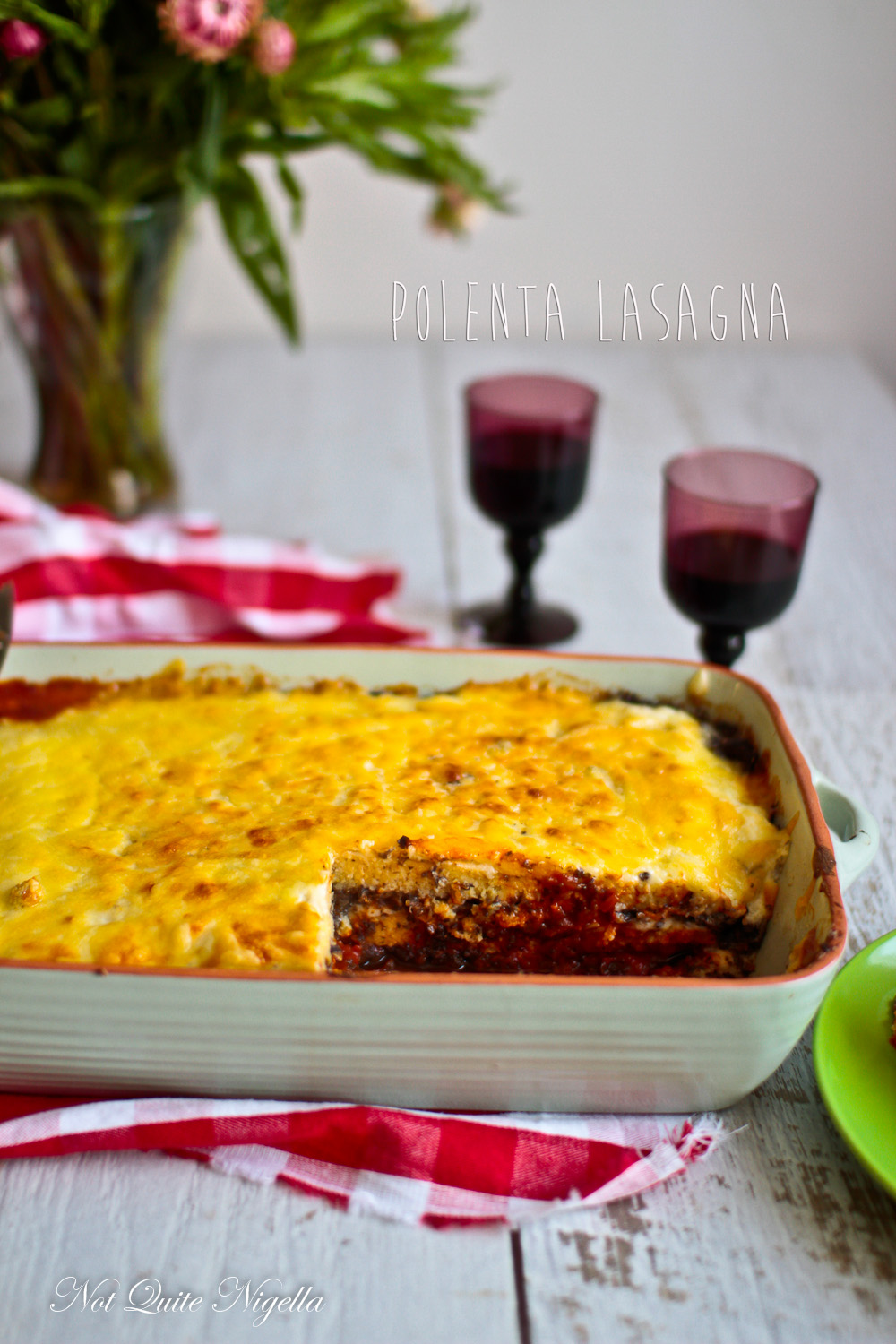 This polenta lasagne is a version of lasagna with polenta providing the "pasta" layer. It can be made with beef or in this case it was made with a medley of mushrooms. It has plenty of creamy cheesy bechamel and oodles of strings of melted cheese too!

I first tried something like this in Sonoma County recently. It was a vegetarian dish, a solid cake of polenta but it tasted just like lasagna. We ordered it out of curiosity but found it was so delicious that I mentally earmarked myself to make it for Nina for one of our crap movie nights as she can't eat a lot of flour and would hopefully love it.

Our crap movie nights started off a while back. We go over to Nina and Garth's apartment as they have subscriptions to all the streaming programs and they prefer not to leave their dog Marley alone at night. It's all about comfort, I go over with no makeup and we wear chunky jumpers or sweats and one of us cooks. Well Nina doesn't cook but she orders food in but we pretend that she has cooked an elaborate Japanese or Vietnamese feast. 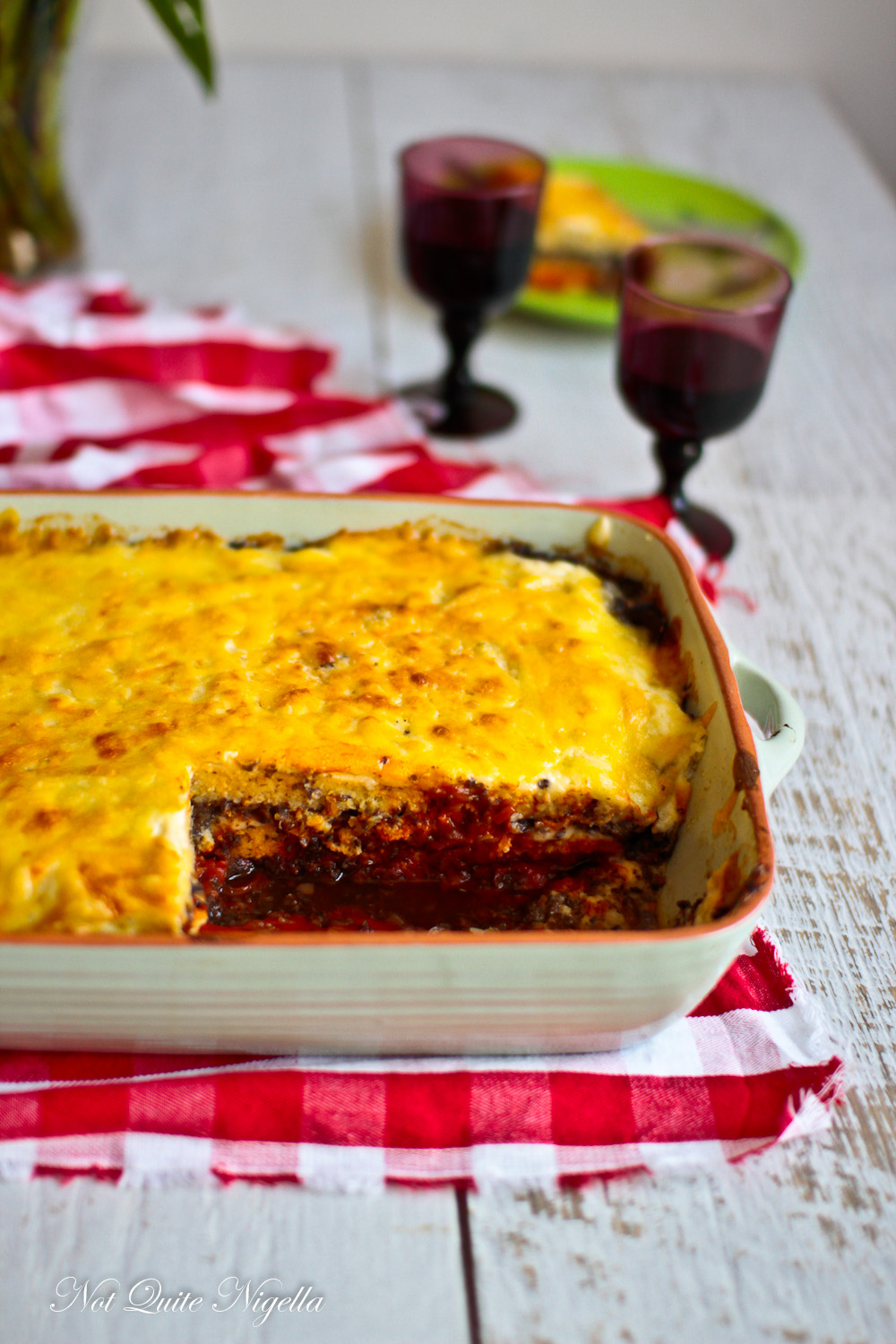 Me: "Nina, for someone that doesn't like cooking you really cook up an amazing feast!"

Nina: "I know, I just whipped this up in no time. I'm just talented that way".

And nobody acknowledges that she ordered the food. It's better that way.

On the first crap movie night we watched Sharknado, a truly terrible movie. We also watched bits of The Room, or what some might consider to be the worst movie of all time. Have you ever seen it? The wooden acting from the main character has to be seen to be believed. It's one of those films that has become a cult film because of how bad it is and in Sydney it is shown at the Cremorne Orpheum where the audience throw plastic spoons at the screen. The list of the cinema's house rules gives you an indication of the crowd, completely flawed acting and dismal plot. 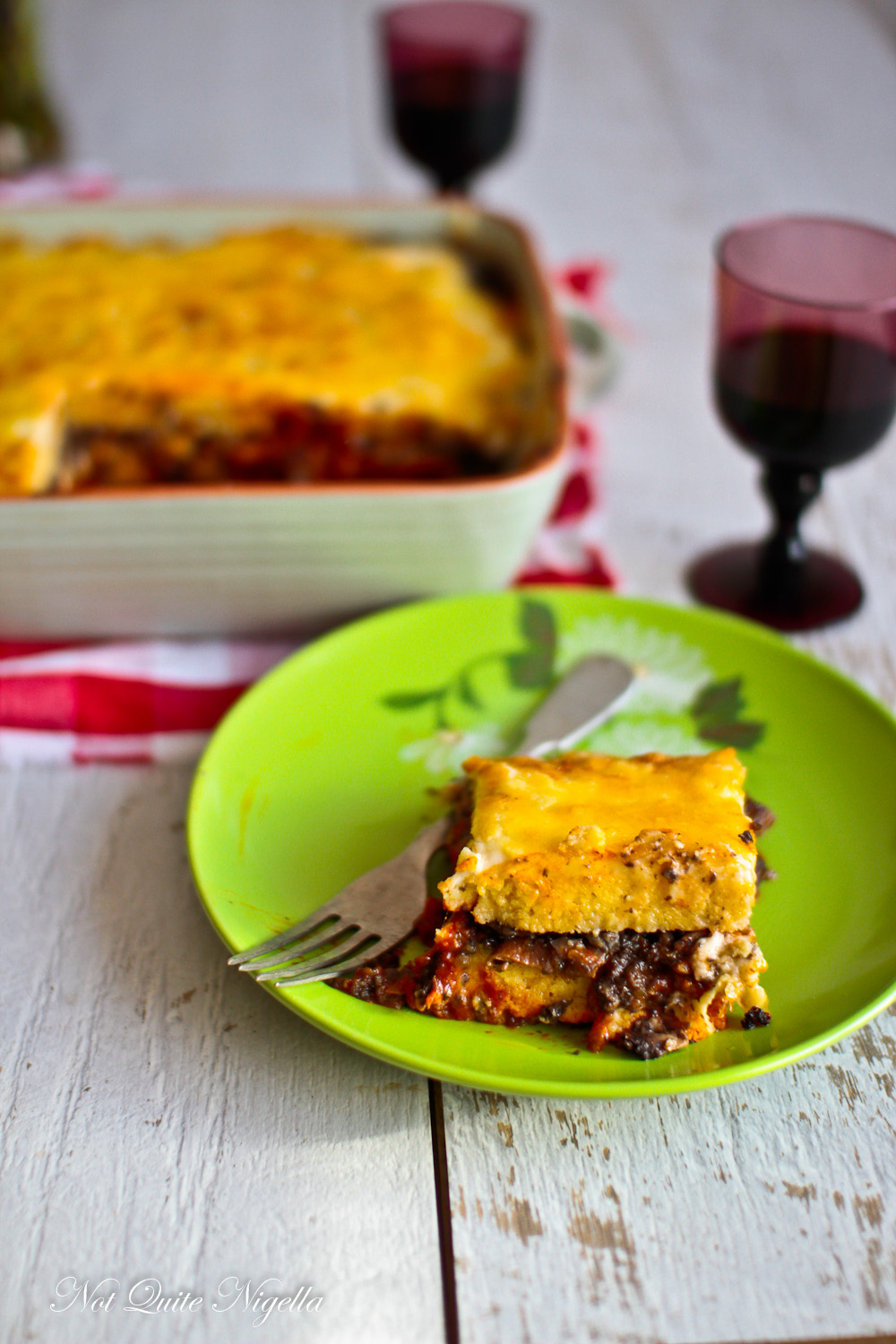 We had our bar set pretty high after that (or really pretty low) and this crap movie night we decided to watch Piranha DD-that's the sequel to Piranha. The difference was the DD which means more large boobs. I am not even kidding. There are even Brazilian bikini waxes in this (that was a surprise!).

We intended to watch just the first 15 minutes but before long we realised that we were actually enjoying the movie in a way. It was...compelling? The best part was when David Hasselhoff made an appearance and Garth discovered his admiration for David Hasselhoff (I think he wants to invite him into the "Wolf pack", his club with Mr NQN).

There was a scene where the Hoff was running with his furry moobs jiggling and I swear the oddest man crush evolved right there and then. Garth then insisted that we watch clips of The Hoff in his prime and then music videos. "Don't you think he's a good looking guy?" he asked me and Nina. We'd look back at him with a combination of horror and pity.

I think we left Garth in the midst of adding some of The Hoff to his Spotify playlist. And we gave them the rest of the lasagna so Nina could pretend to have cooked it.

So tell me Dear Reader, do you ever have crap movie nights? Have you ever seen The Room? What is the worst movie you've ever seen>? 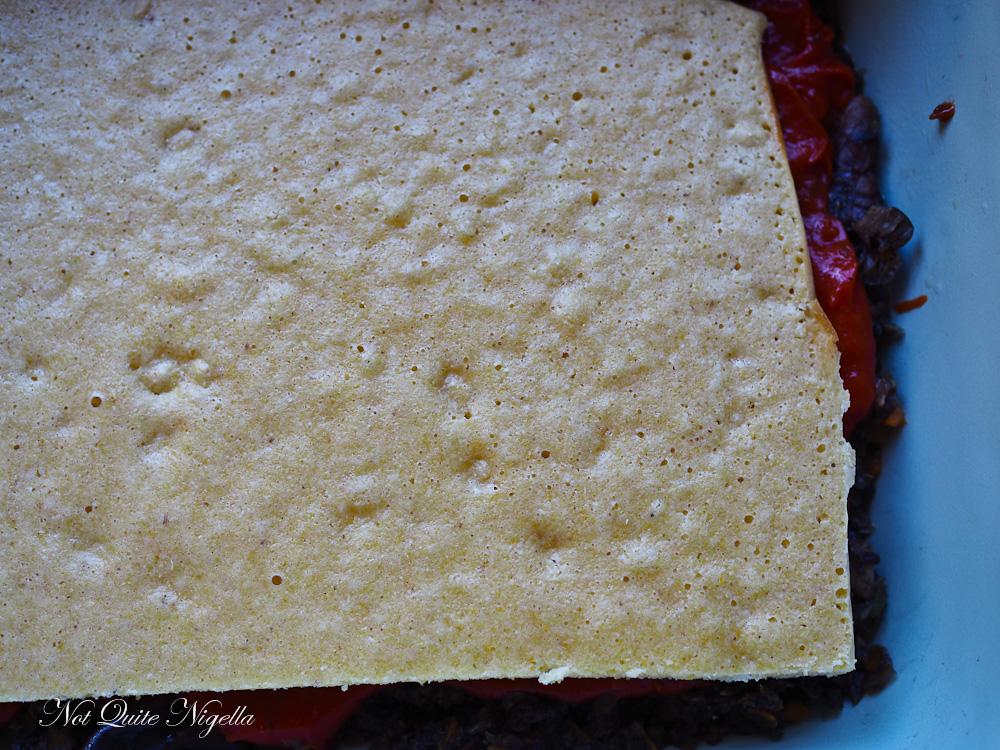 Step 1 - Line a swiss roll tin around the same size as your lasagna tin. Bring the milk and vegetable stock to a boil and then add the polenta and salt in in a steady stream. Cook until thick and then spread out into the tin. Cool and then allow to set in the fridge.

Step 2 - Meanwhile do the other parts to this lasagne. Heat the oil and add the onions, celery and carrot and cook until softened. Add the garlic and saute for 2-3 minutes, then add the mushrooms and cook until they release the liquid. Add the soy sauce and season and then make sure that the liquid evaporates.

Step 3 - Then make the bechamel sauce. Melt the butter on medium high heat and then add the flour and cook for a minute. Then switch to a whisk and add the hot milk gradually-in about 6-8 lots making sure to whisk between additions. Add cheese and nutmeg and taste for seasoning adding salt and pepper if it needs it. 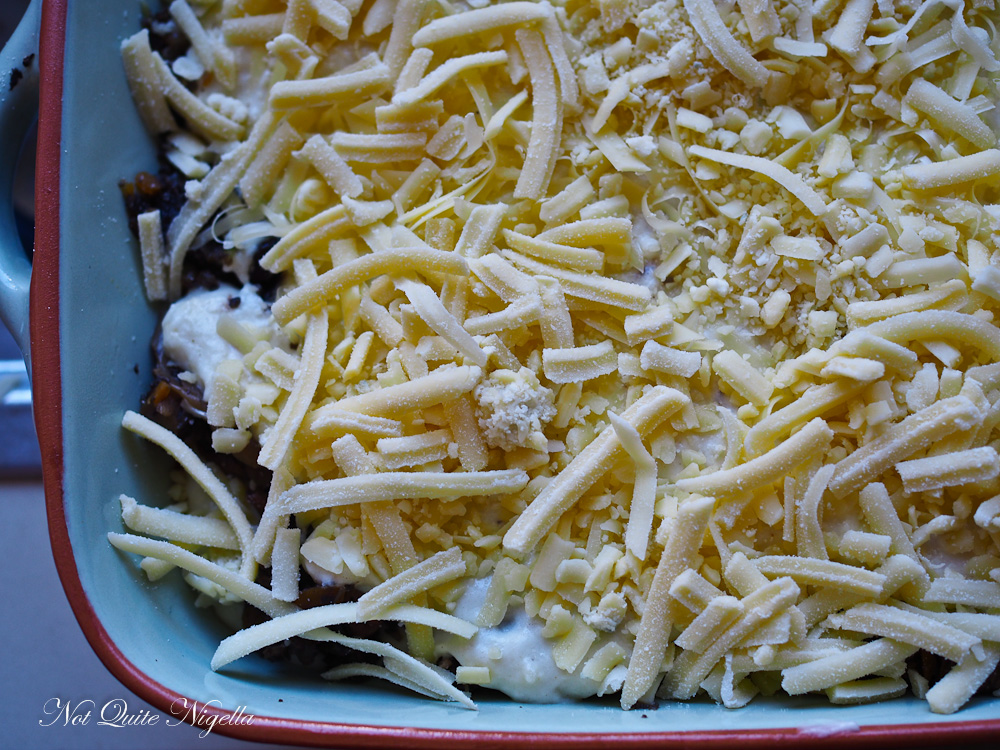 Step 4 - Preheat oven to 200C/400F. Grease a lasagna tin and layer with the mushrooms, then add the pasta bake sauce. Then layer with the polenta (I made two layers as my swiss roll tin was so large) and then layer again with mushrooms and then the bechamel sauce at the end. Top with mozzarella cheese and bake for 20 minutes.