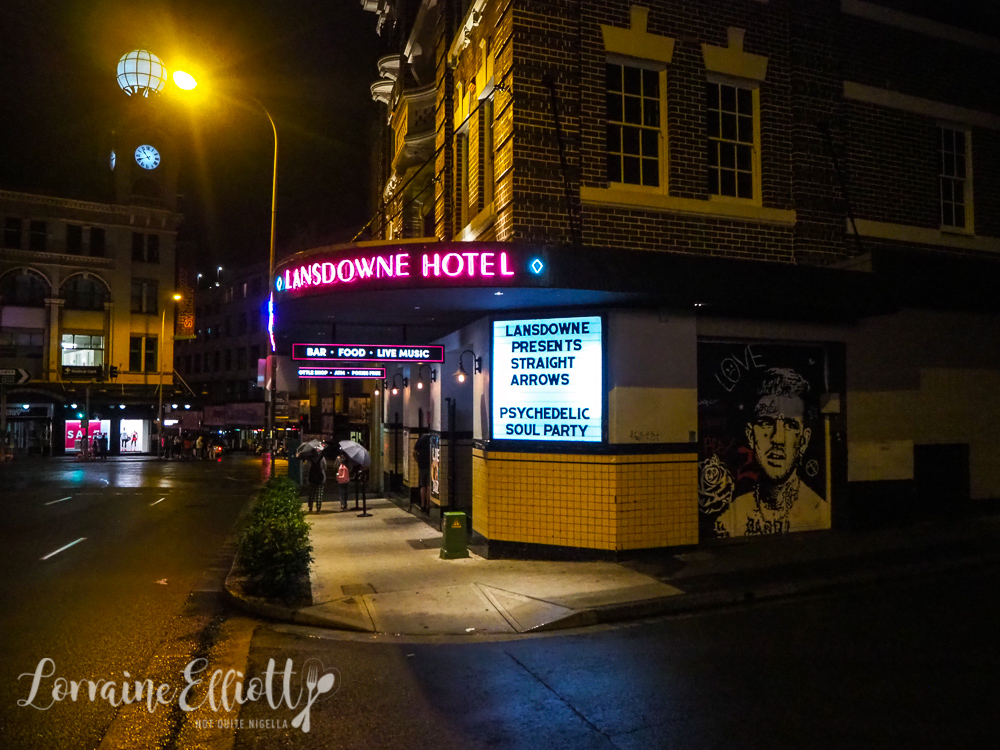 The Mary's burgers crew have turned their hand to pizza at the Landsdowne Hotel in Chippendale. It's a profanity laden pizza menu featuring Detroit and regular pizzas with names like "Spicy f^%$er" and "Smokey F^%$er" and people can also book a "Fancy As F^%$" table in the intimate graffitied and oddly romantic dining room. Have you ever tried a Detroit style square pizza? It's F'ing delicious! 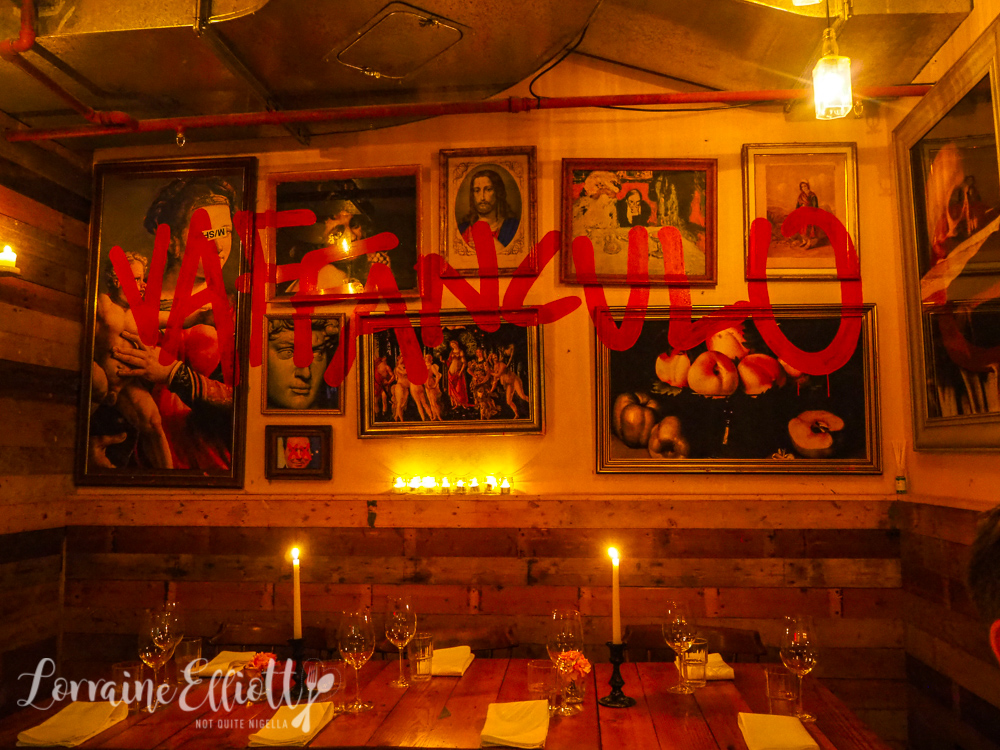 I knew exactly who I'd be bringing to Mary's Pizzeria. My fellow pizza and swearing enthusiast friends Ivy and Ryan and of course Mr NQN. The deal is here you can just rock up and eat from the pizza menu at The Landsdowne pub. 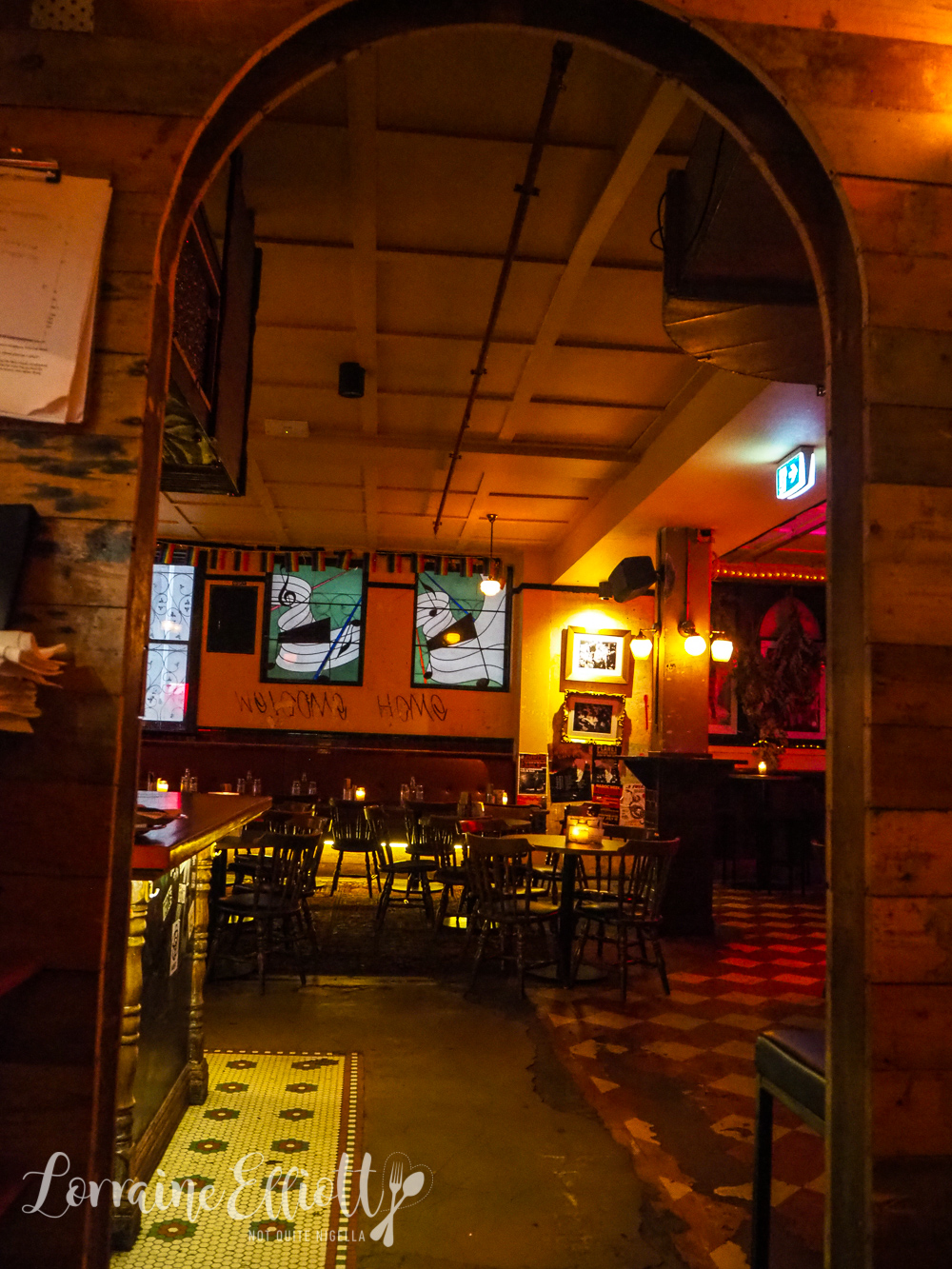 But you can also book a table in the tiny dining room that seats around 16 people. The advantage is that you can then order some extra dishes like pastas and sides along with your pizzas. 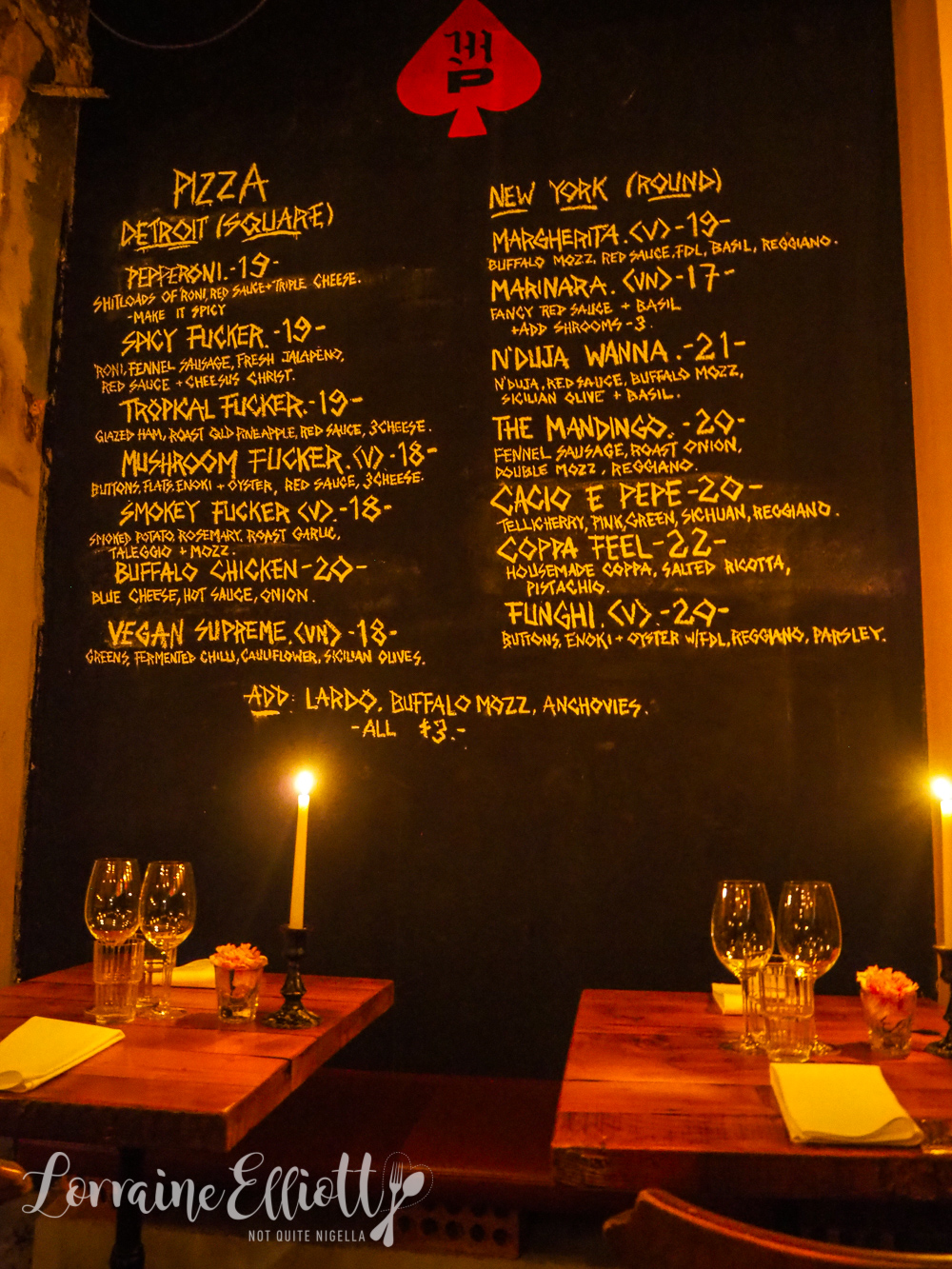 The dining room has flowers on the tables and candles as well as a wall of pictures of peaches, Jesus with the word "Vaffanculo" spray painted over it. That's Italian for "F^%$ you" or if translated literally a more graphic description of a sex act (Urban Dictionary can sort you out). It's a lucky thing that conservative guy Ryan has eschewed his familiar white collared shirt to wear a black t-shirt because the poor guy may not have felt at home here. 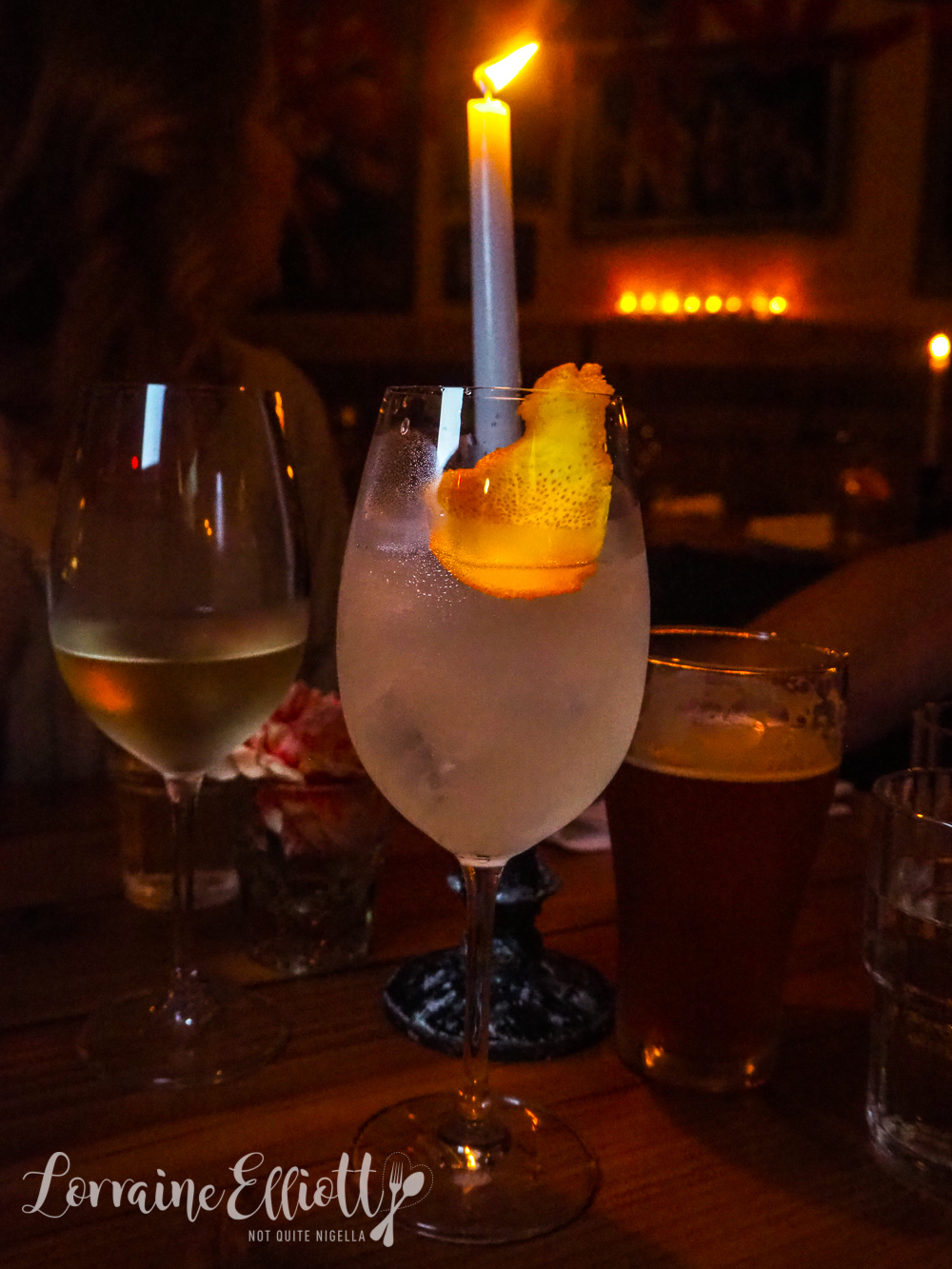 Service from our waiter Mitch is super friendly and he gets the service just right. They offer complimentary sparkling or still water which is a nice surprise and we start with wine, beer and a Yuzushu spritz for me which is pretty damn perfect way to start a Saturday night. 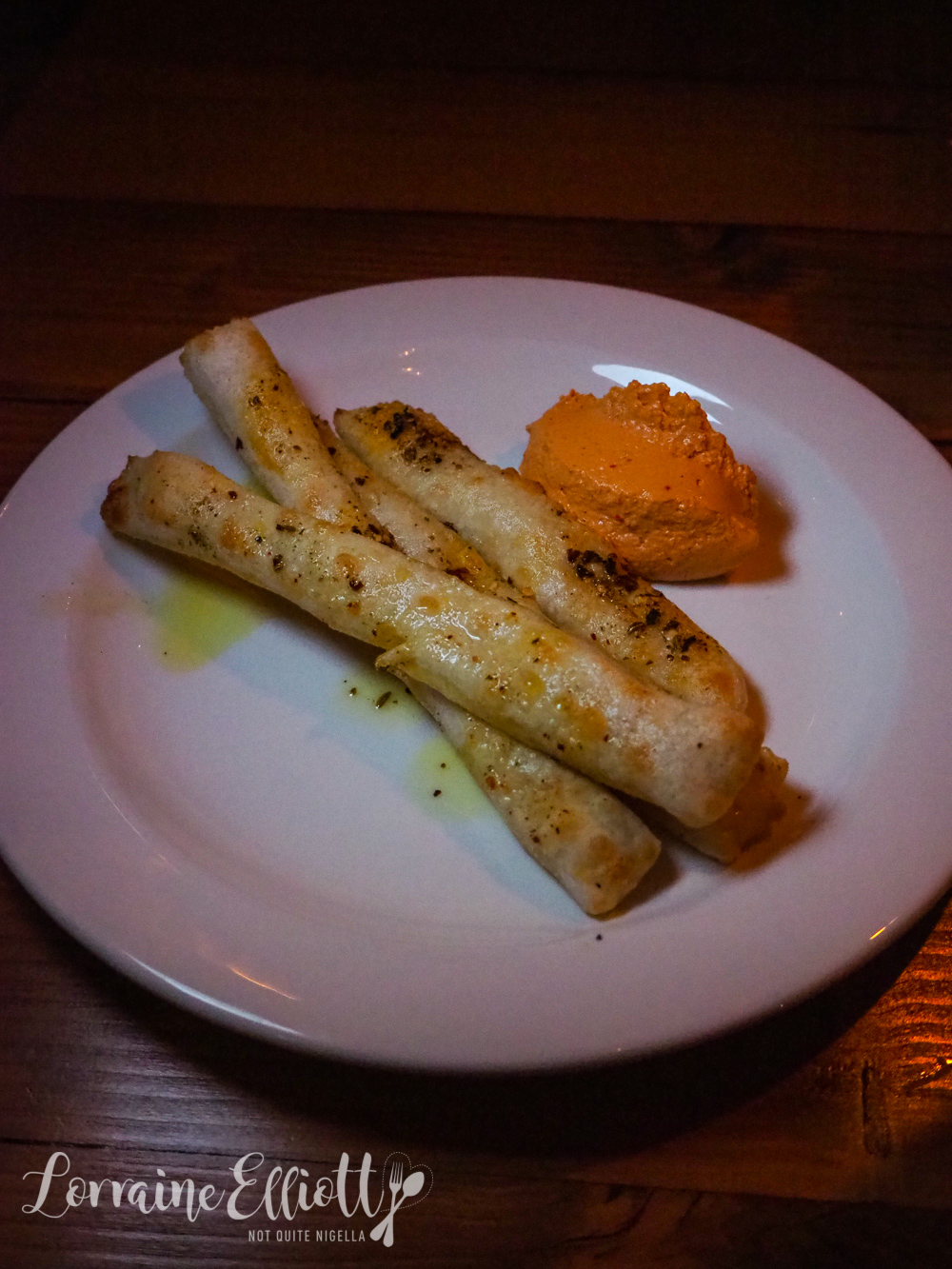 A complimentary plate of pizza crusts and spicy cashew cream hits the table. If this is a sign of things to come then I'm very happy. The pizza crusts are chewy and light while the smoked tomato cashew cream is resoundingly spicy and so creamy that it tastes that you shouldn't be able to find it in the health food section of a health food store. 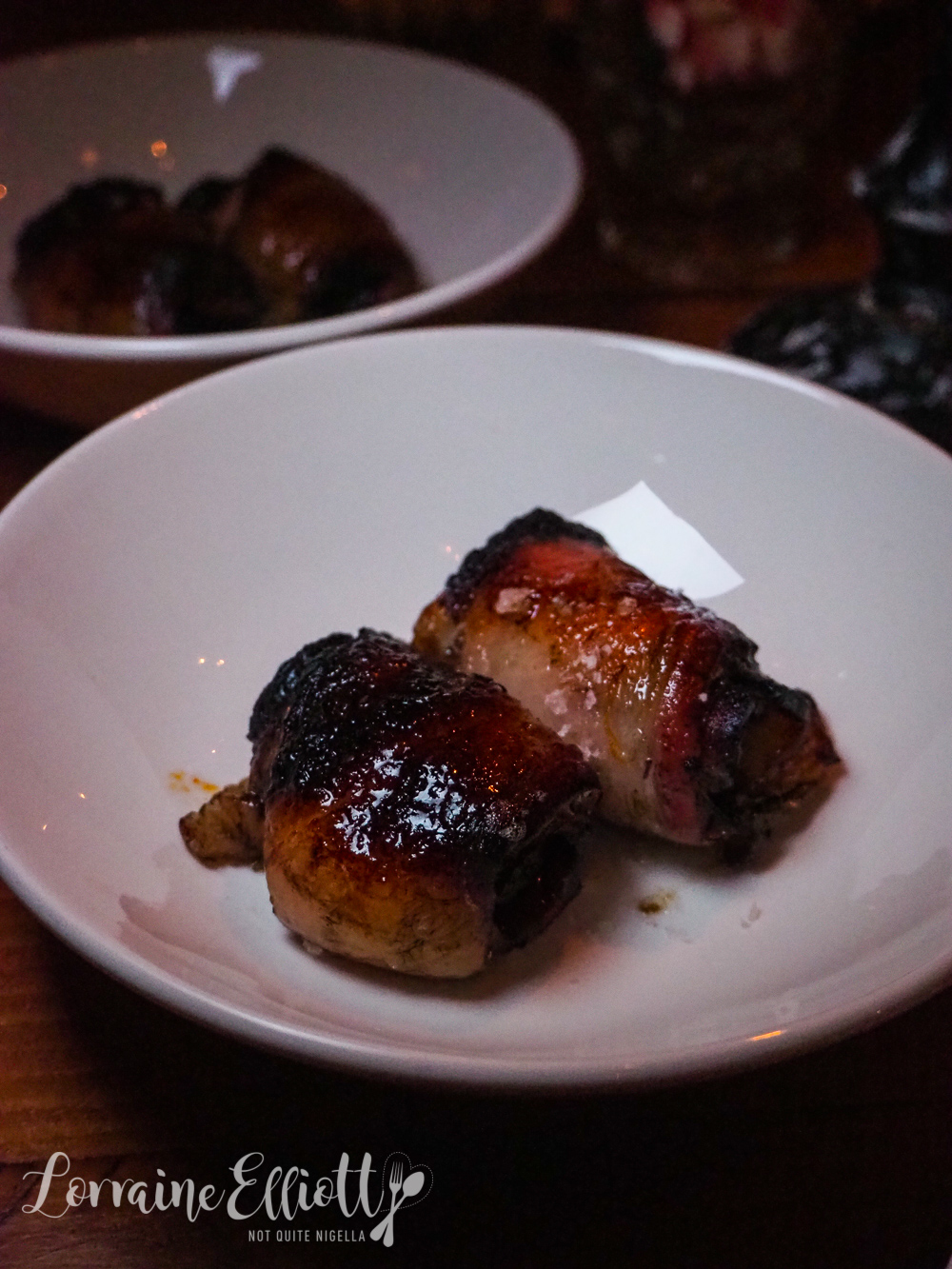 We had to start with these little morsels that come out piping hot and glistening. "Just give them 30 seconds and then pop them into your mouth," they tell us. These bites start with a crunchy almond nestled inside a prune soaked in Montenegro Amaro and then wrapped in Mary's trash can bacon with Montenegro and tea glaze. They're amazingly good-all sorts of flavours and textures in one bite from the bacon to the sweet prune to the crunchy almond in the centre. 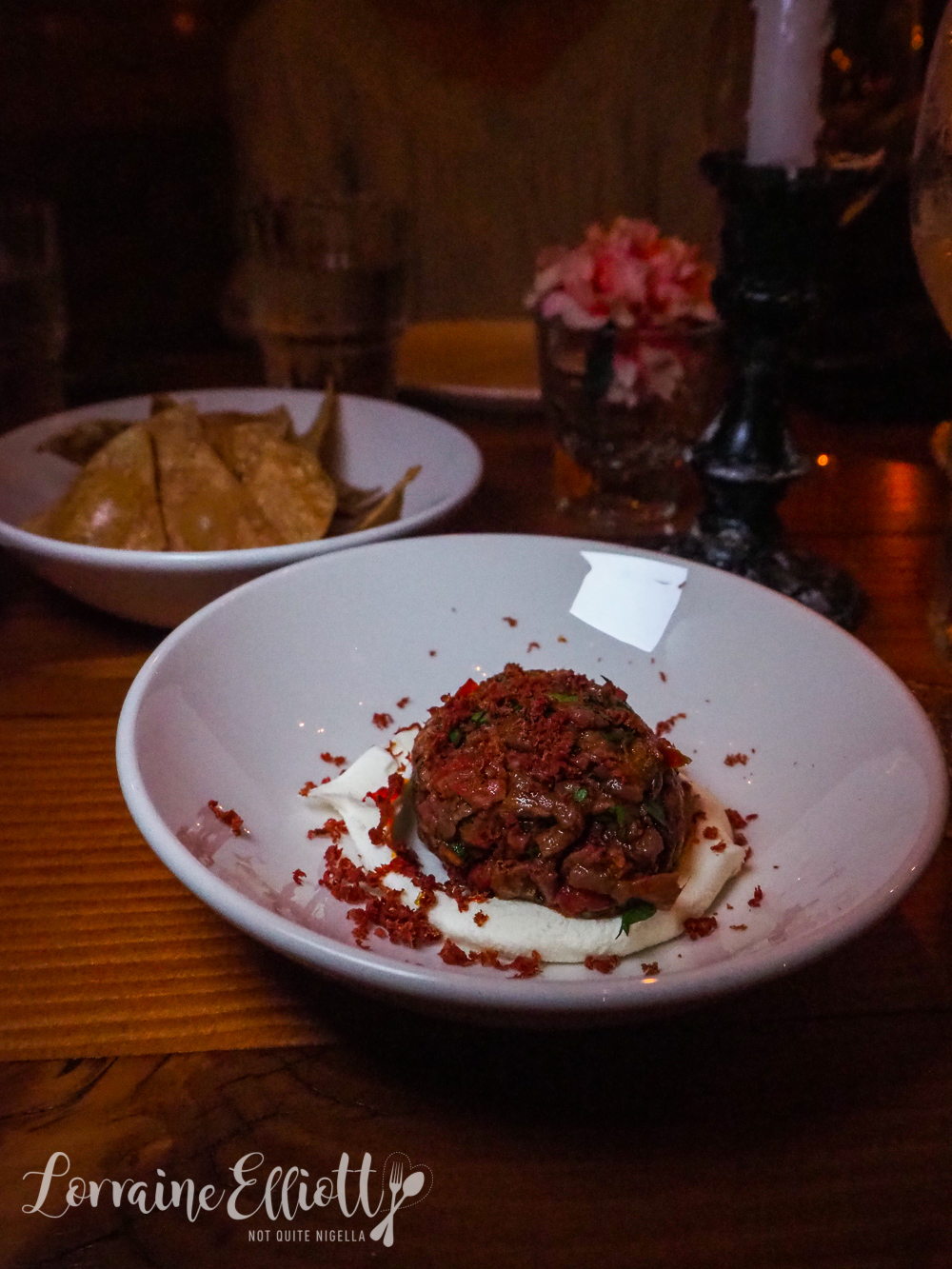 The heart and tongue crudo reminds me of a steak tartare served atop a layer of mascarpone. There are freshly fried warm corn chips to the side to scoop up the creamy, well seasoned heart and tongue meat. 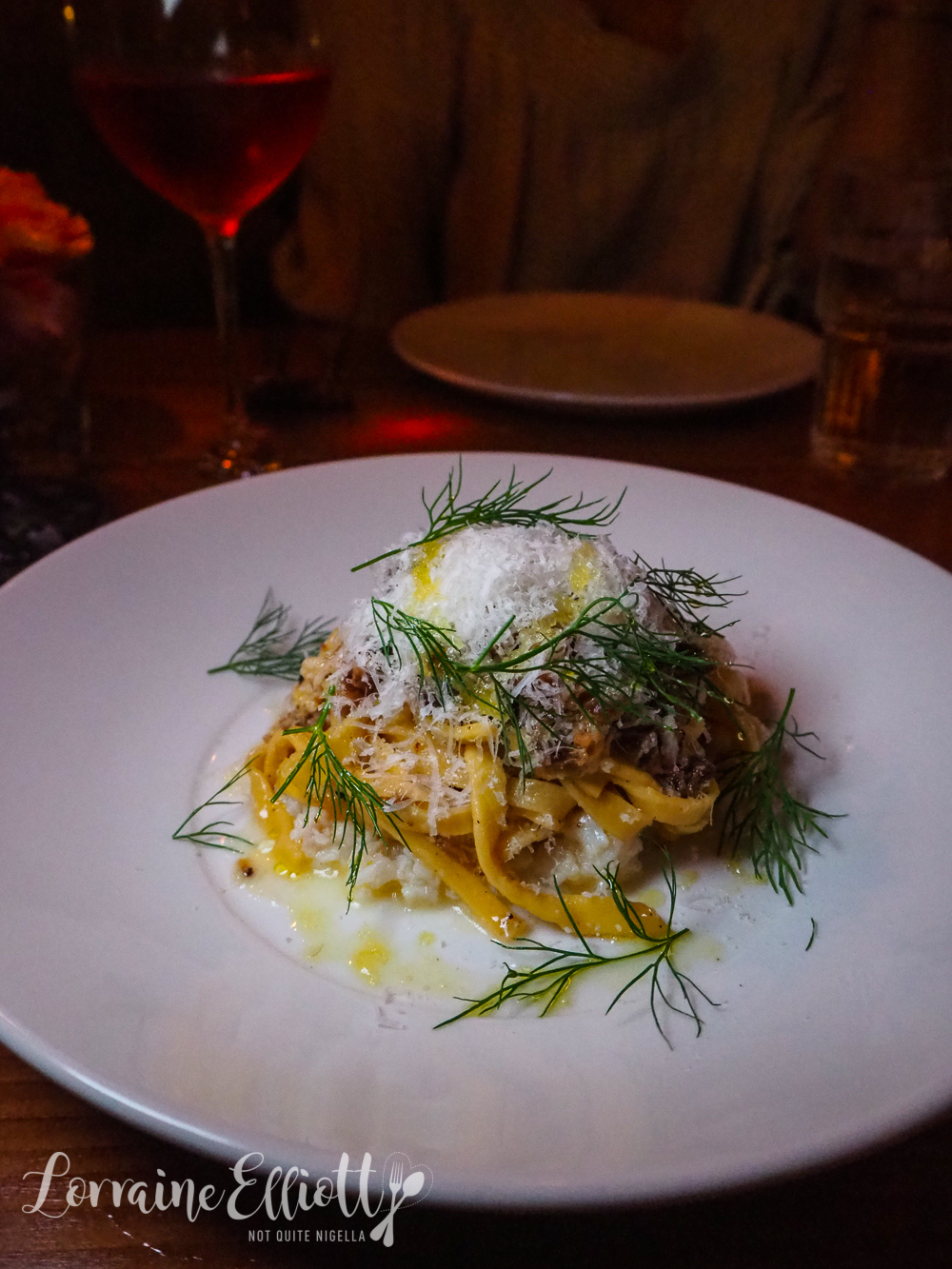 The pastas are all hand cut and this is a pasta special with blue swimmer crab and a macadamia, cauliflower and lemon dill sauce. It's a very light pasta almost like a noodle rather than a linguine and it's good although I would have liked a little touch of chilli to this too. 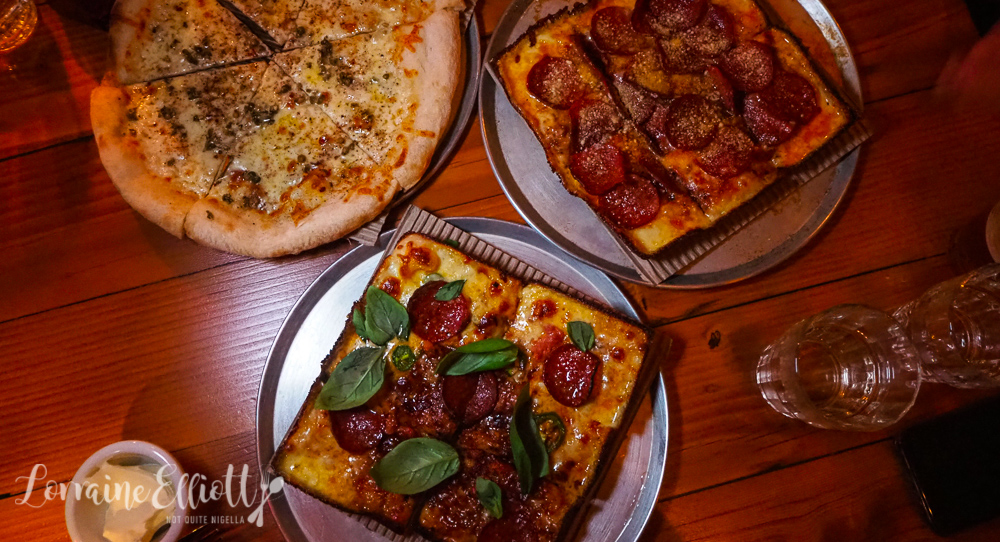 Then comes time for the pizzas. There are two pizza style-the traditional round pizza as well as a Detroit style pizza. Let's talk Detroit style pizzas. For starters they're rectangular or square rather than round with a thicker crust and a noticeably crispy base. The history of Detroit pizza has been going since 1946 at Buddy's Rendezvous a pizza place where Gus Guerra used his wife's Sicilian pizza dough recipe. Legend has it that the reason why they're rectangular has to do with the pan and Detroit's past at a Motor City - Gus is said to have baked the pizzas in a thick rectangular blue steel industrial parts tray from a factory. 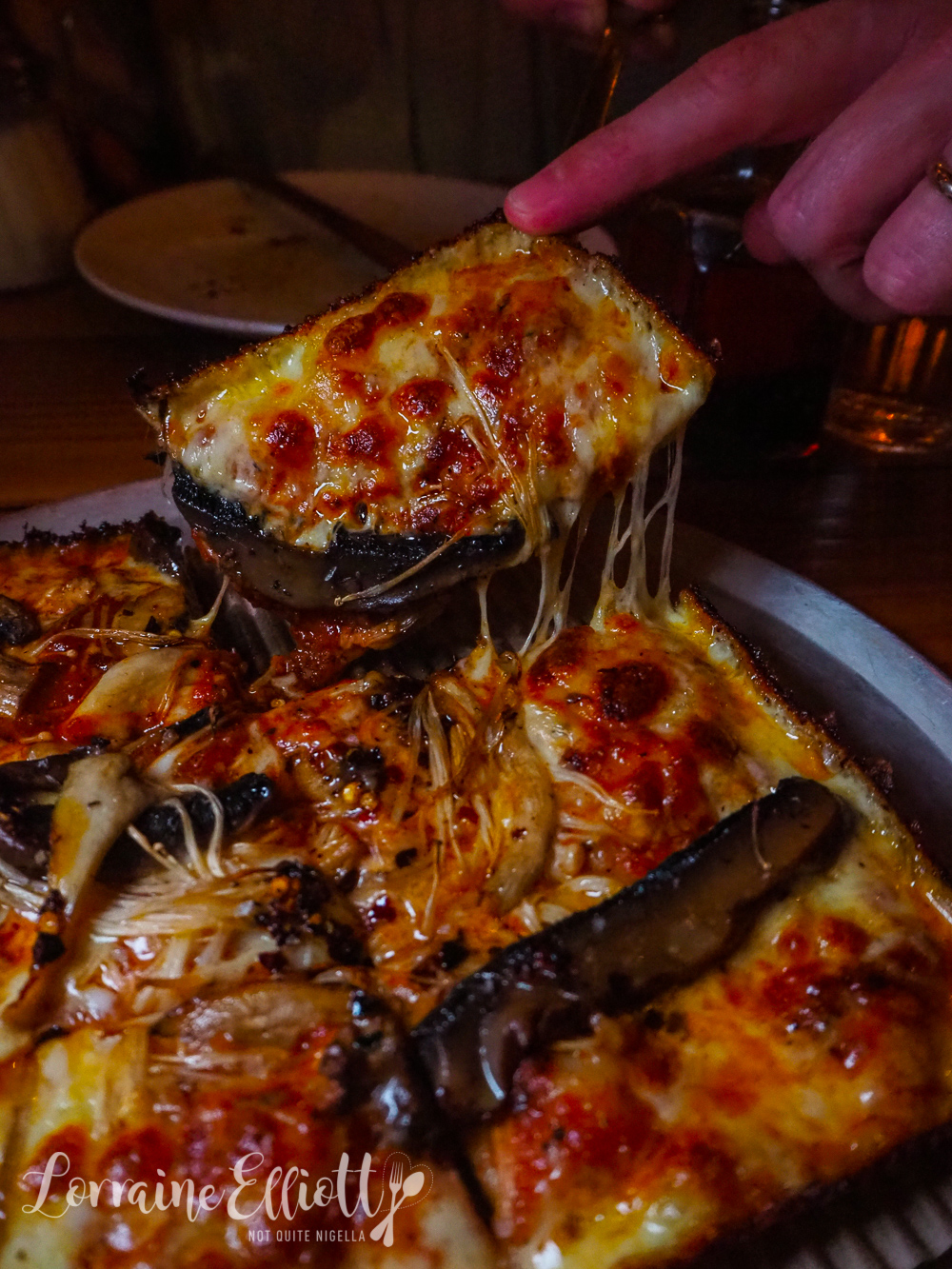 The wonderful thing about these is the texture and the cheese and toppings that goes right to the edges-there's no crust to leave behind. There is a Detroit pizza chain in Sydney and I had tried a piece which reminded me of a Pizza Hut deep pan pizza crust which honestly didn't thrill me much. But since we liked the sound of the Detroit pizza toppings and since none of us had really tried many Detroit style pizzas we decided to try two Detroit style pizzas and one round. 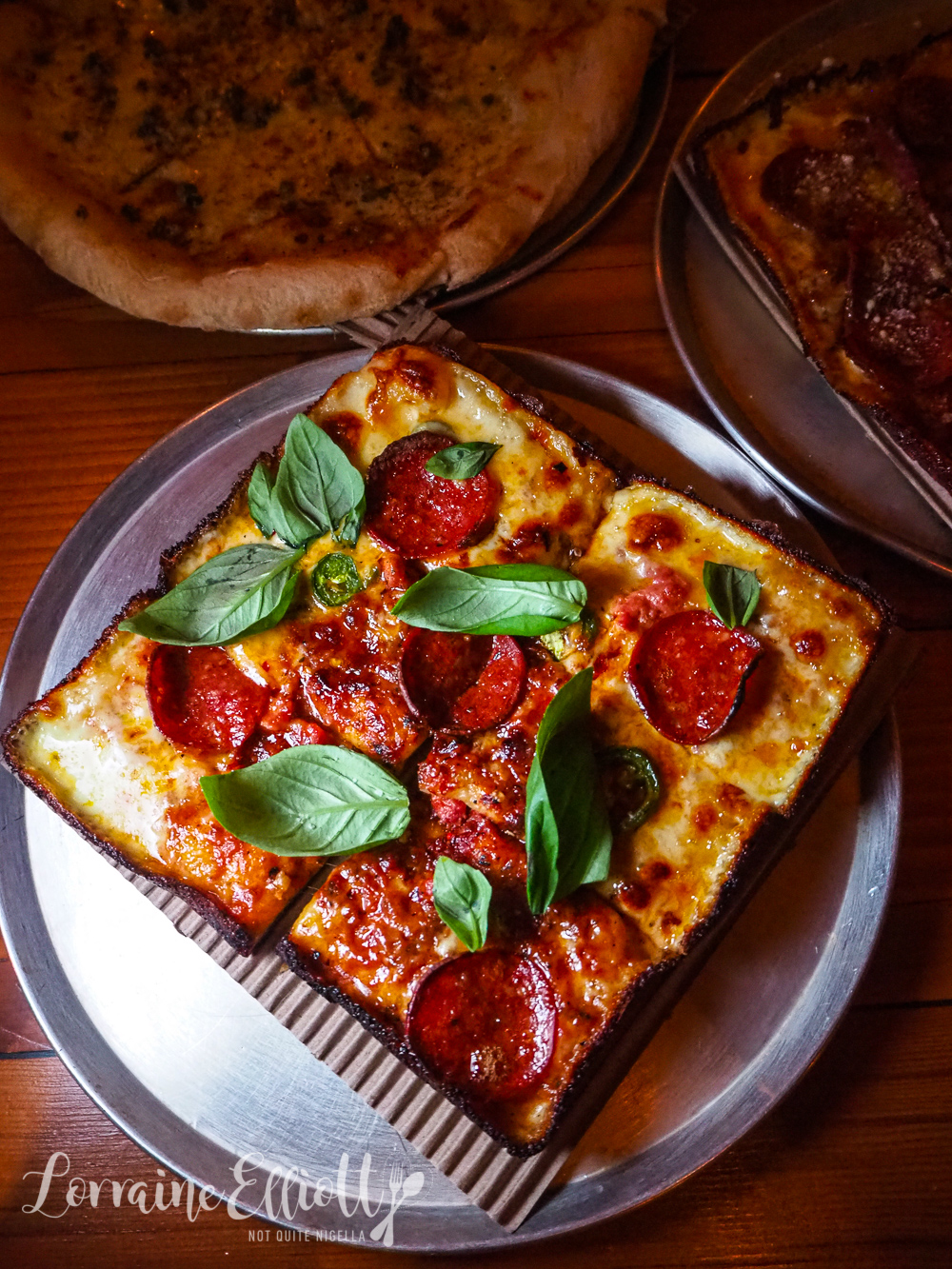 One might suggest that we ordered pizzas based on the names. That's only partially true-they did catch our eye with their names but all four of us adore spicy pizza and the Spicy F^%$er with 'roni cups (pepperoni y'all), fennel sausage, fresh jalapeno, red sauce and "cheezus christ" is a winner for all of us. The pizzas are a good size-as Ivy describes them they're like a "personal pizza size". The part I love is the crust-there's just enough crust to hold all that luscious filling in and it's appealingly crispy edged. I don't get much spiciness although this apparently is a roulette wheel because two pieces have spicy jalapeno slices whilst mine doesn't but the pizzas come with extra chilli oil and parmesan cheese. 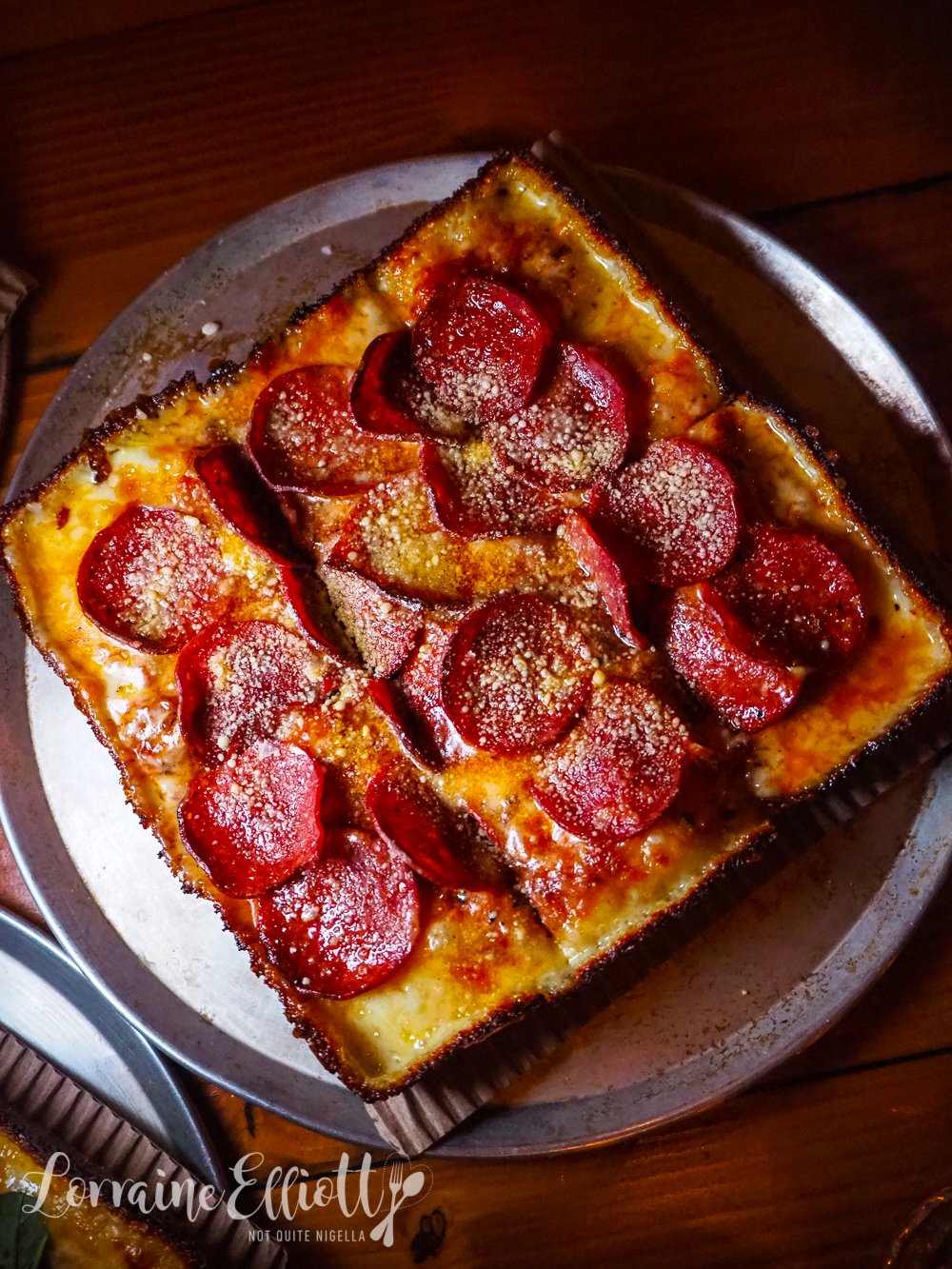 Described as a "shitload of 'roni cups", red sauce and triple cheese the simplicity of the classic pepperoni pizza appeals to me and I think this might be a strong contender for my favourite along with the spicy f^%$er. I know I keep going on about the crust but really it's just the right level of crust to filling proportions that we're talking and Ivy points out that the Detroit pizzas are more generous with toppings than the regular ones but they're not laden with filling like say a Chicago style pizza. 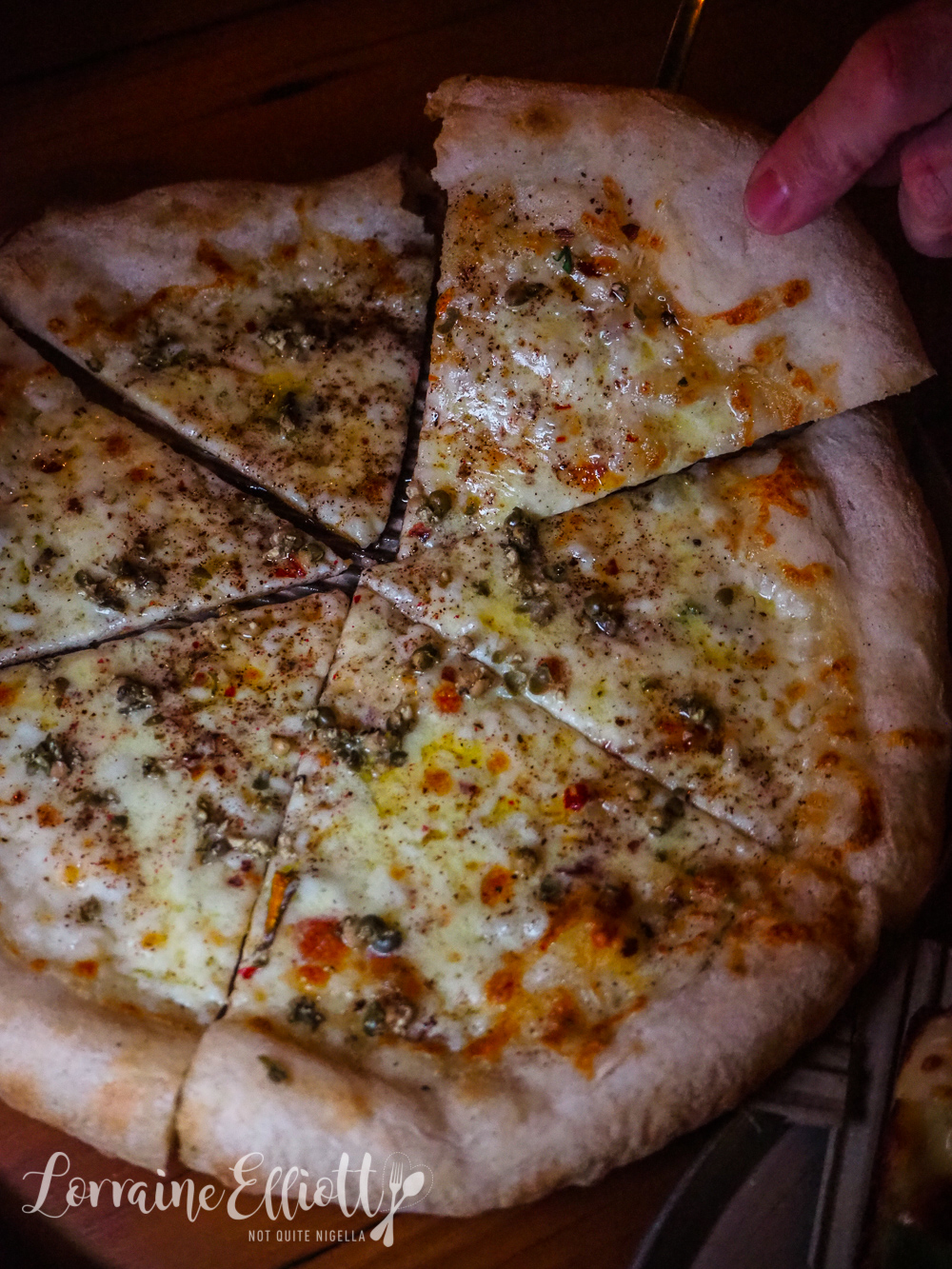 We did order one round pizza made with a 72 hour fermented dough. Surprisingly it ends up being the spiciest of all of them. I love cacio e pepe pasta and this pizza is made with tellicherry peppers, pink, green and Sichuan peppercorns and Sicilian reggiano. It's really breaking the rules of Cacio e pepe with its simple black pepper and pecorino cheese but it's a solid pizza with an appealingly spicy bite to it. 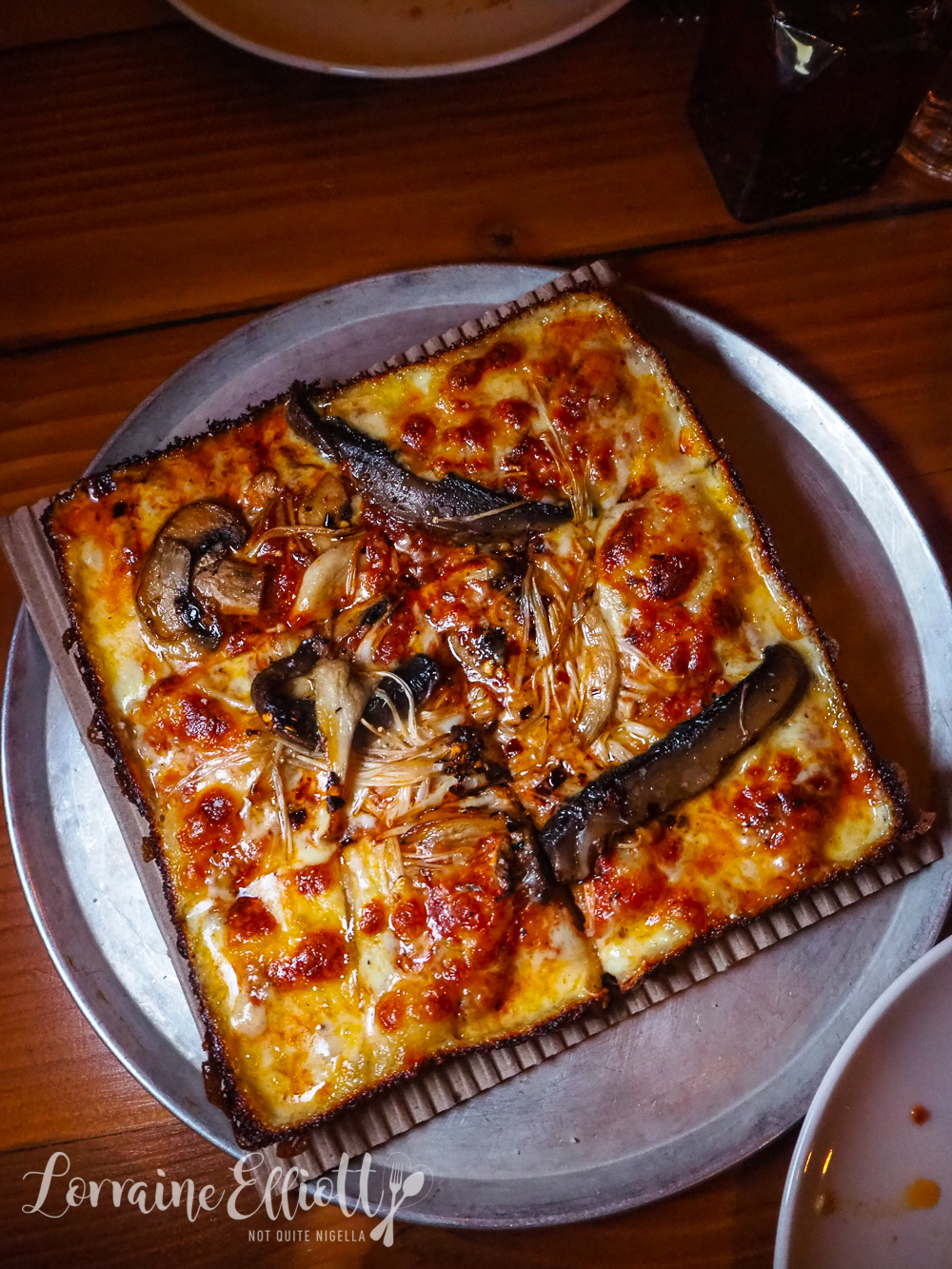 Although we had eaten a lot I wanted more Detroit pizza. Ryan leans in and says, "You know you can always take it away," which is a green light for me to order another pizza although nobody else wants more except for me. And that's how we ended up with the mushroom pizza with button, flat enoki and king as well as "cheese, cheese and cheese". This is another fantastic pizza that just needs a bit of a sprinkling of the parmesan cheese to raise it to perfection. And before we know it the whole damn pizza is gone and we're now looking around wondering if there's dessert. 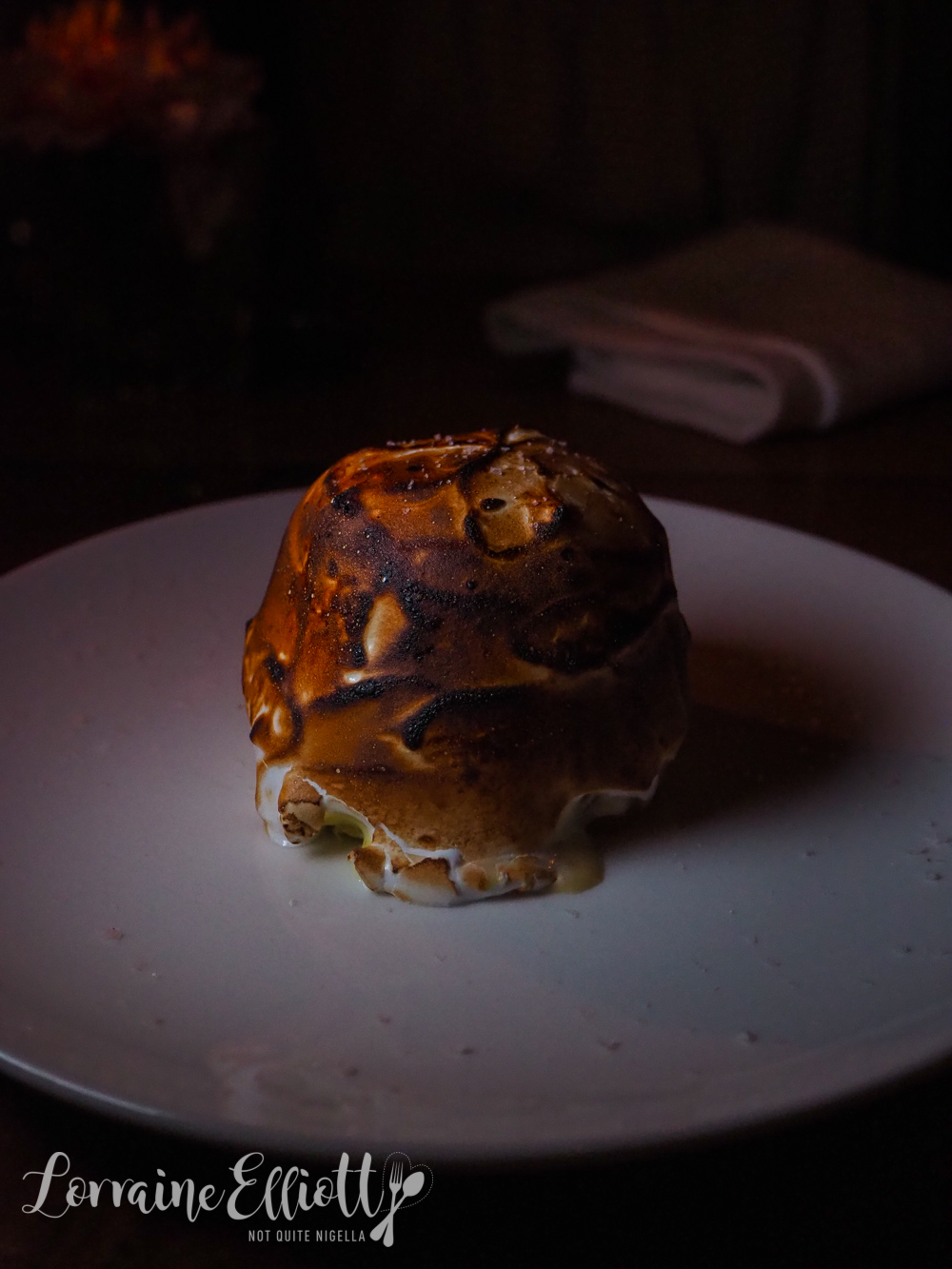 There's one dessert on the menu. It's a zuccotto or a bombe Alaska made with madeira cake filled with vanilla, coffee and chocolate ice cream and then smothered in meringue and torched. 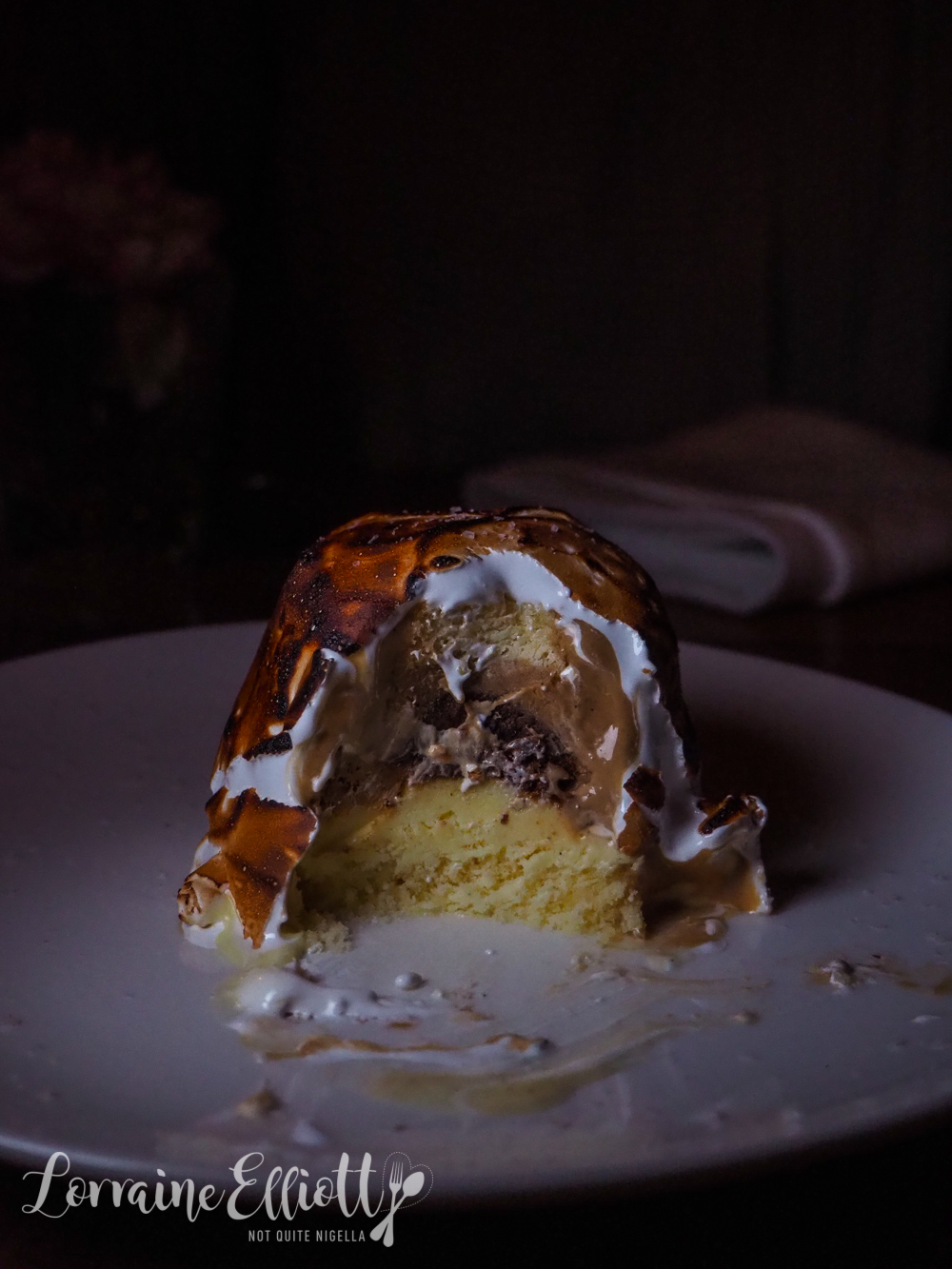 Ryan was a bit sad that it wasn't torched at the table (he was hoping for that) but it's a nice desert that Ivy in particular likes a lot. As for me, I'm busy scanning the menu thinking of which other pizza I want to try.

So tell me Dear Reader, have you ever tried Detroit style pizza? Do you leave the crusts behind or do you eat them? And do you swear and what is your favourite swear word?

Mary's Pizzeria At The Landsdowne