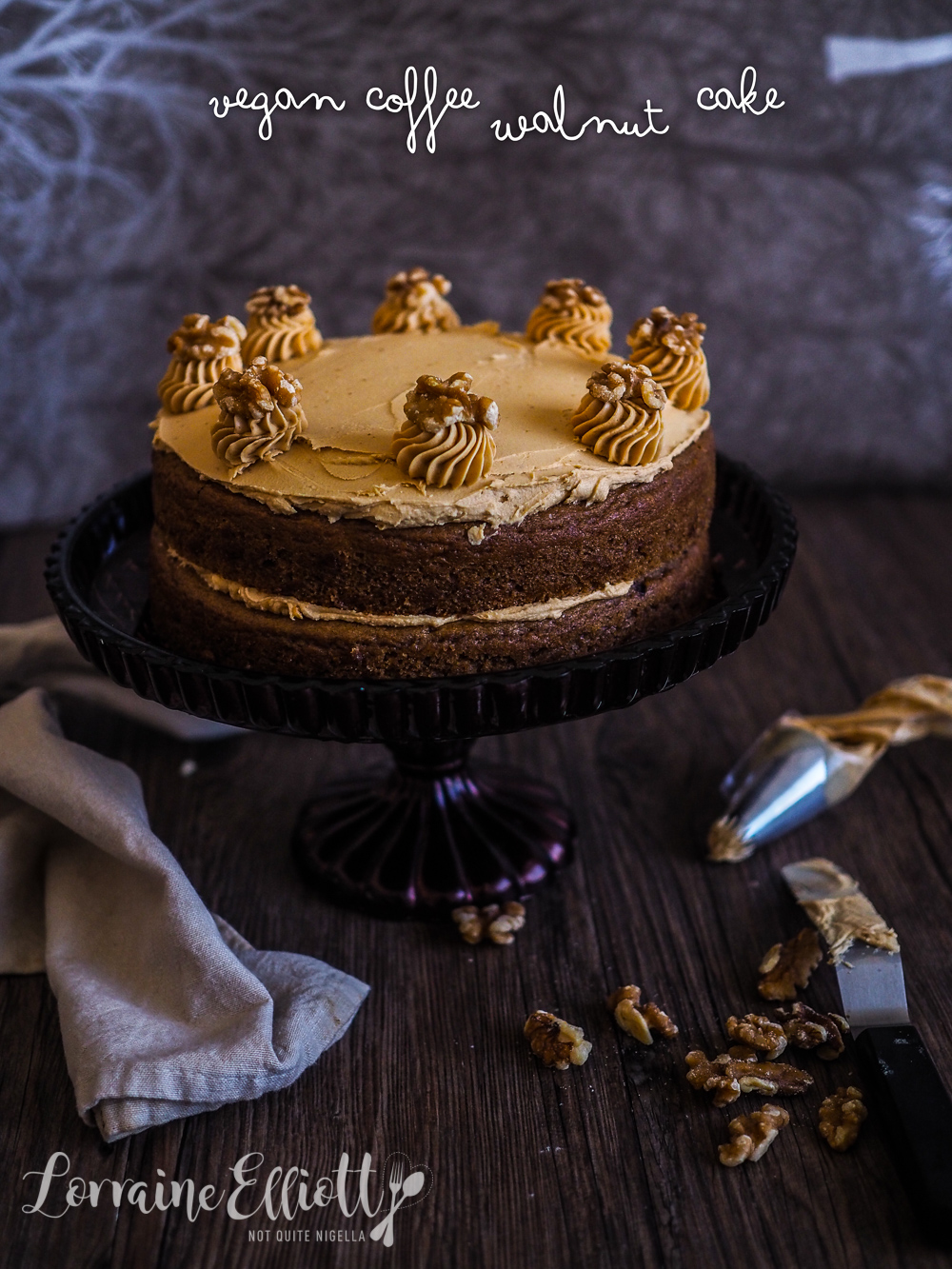 This coffee cake is something special. And no I don't mean it's special because it is a vegan cake. It is a vegan coffee vanilla flavoured sponge, wonderfully light in texture yet uses no eggs if you can believe it! It has has a centre of toasted walnut praline and a dreamy coffee buttercream frosting! I called her Veronica.

Although there is no way I could be a vegetarian or vegan full time, I do like that some recipes make for delicious shortcuts. Vegan caramel is amazing as is vegan mayonnaise and I wanted to see if I could do a vegan sponge cake. A friend got me onto the method which sounded counter intuitive but I followed her instructions. And lo and behold it was magnificent. 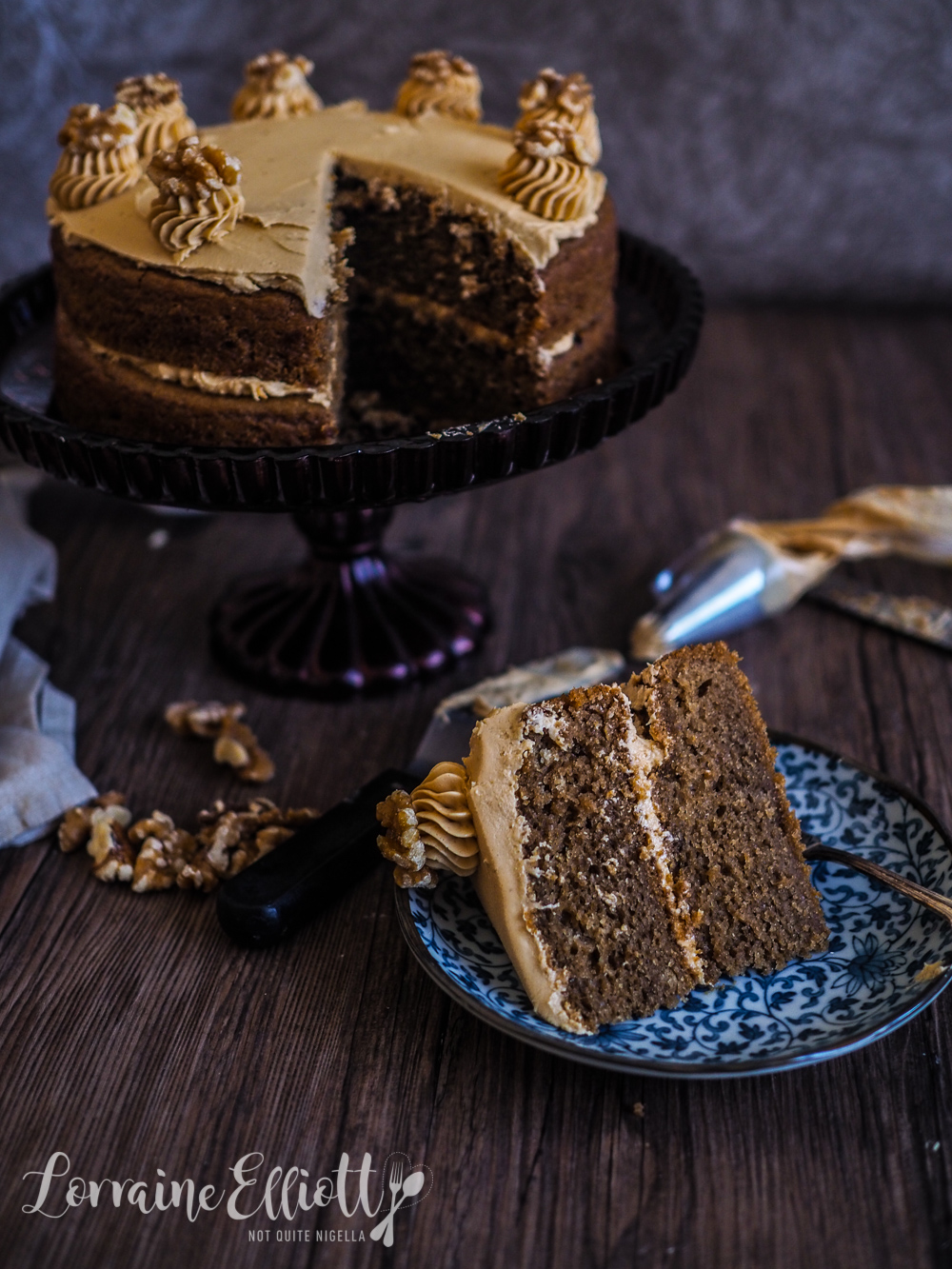 And as I often do, I turn to these vegan cake recipes for when I am short on time and want a simple one bowl cake to make. And the coffee and walnut combination is a magical one. If ever something was meant to be shared over a cup of coffee and company, it is this cake. I hope you'll keep this recipe handy for when you're short on time or are having a vegan over - consider it a helpful life tip. 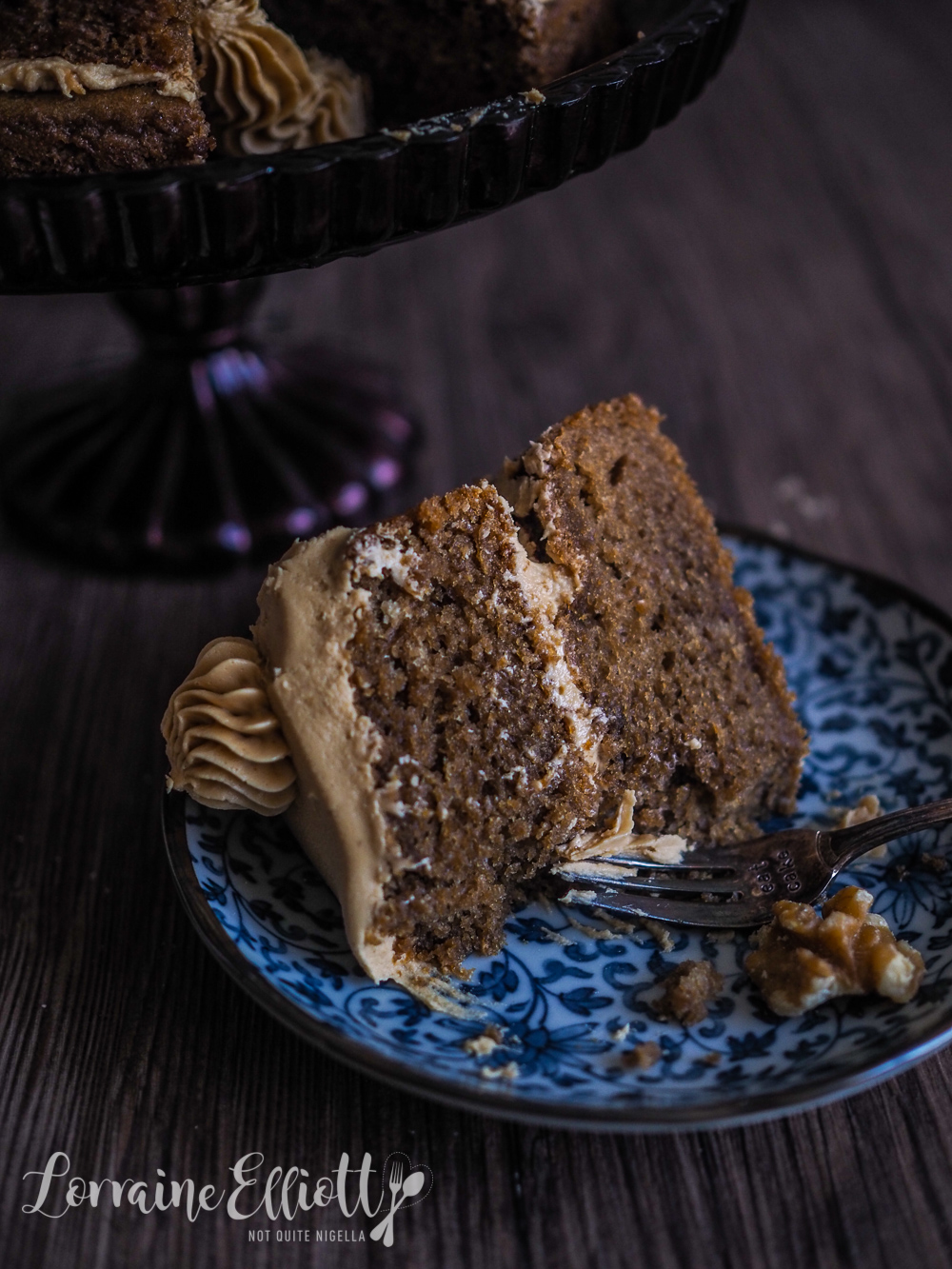 I actually came across another little bit of a life tip recently that I thought was pretty genius. The tip goes that if you are at a restaurant and there is something wrong with your food and it needs to be sent back (i.e. a fly in your soup - does that actually happen?) there is something that you should do to make sure that they don't just re-arrange the same meal.

They say that you should do heavily salt the food before you send it back. That way you will know straight away if they've recooked the item or whether they've simply removed the fly and re-plated it!

So tell me Dear Reader, do you ever make vegan cakes? Have you ever tried a coffee walnut cake? And had you ever heard of that tip? Do you have any life tips? 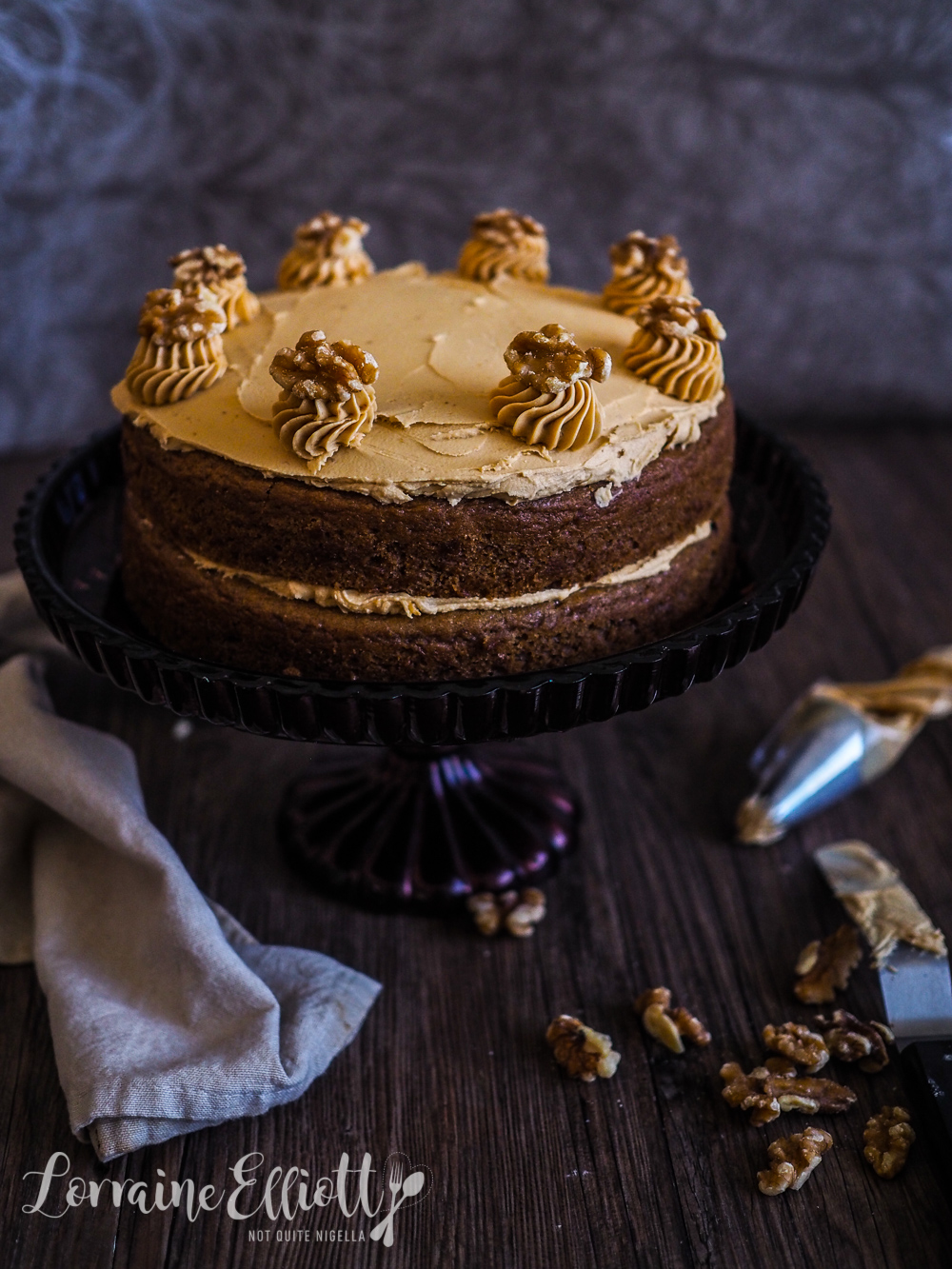 Step 1 - Preheat oven to 180C/350F and line 2x20cm/8inch round tins on the base and sides. Whisk the cake flour, bicarb and sugar in the bowl of an electric mixer fitted with a whisk. In a jug measure the oil, almond milk, vanilla and coffee water. 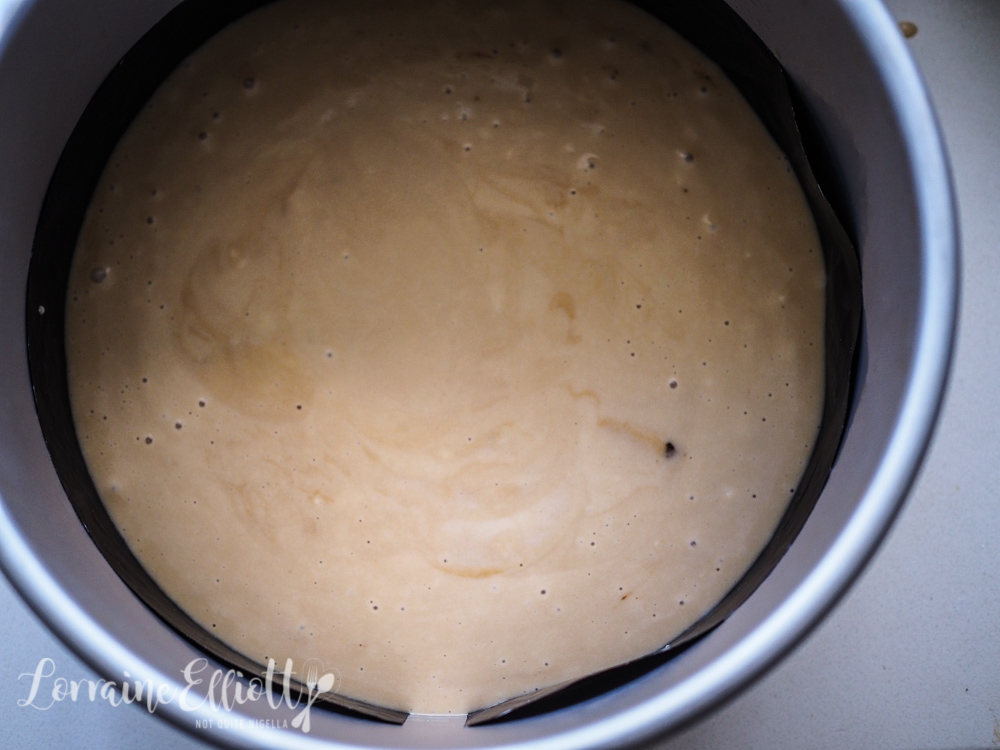 Step 2 - Add the liquid to the flour and whisk for 3 minutes on medium speed - I know this will seem counterintuitive to mix it for this amount of time but it will work and make it light. Divide batter evenly into two tins and bake for 35 minutes. Cool in the tin for 10 minutes and then transfer to a cooling rack.

Step 3 - Switch to a beater attachment and beat the butter substitute and icing sugar on low speed. Add the coffee and vanilla and then switch to higher speed beating until smooth. 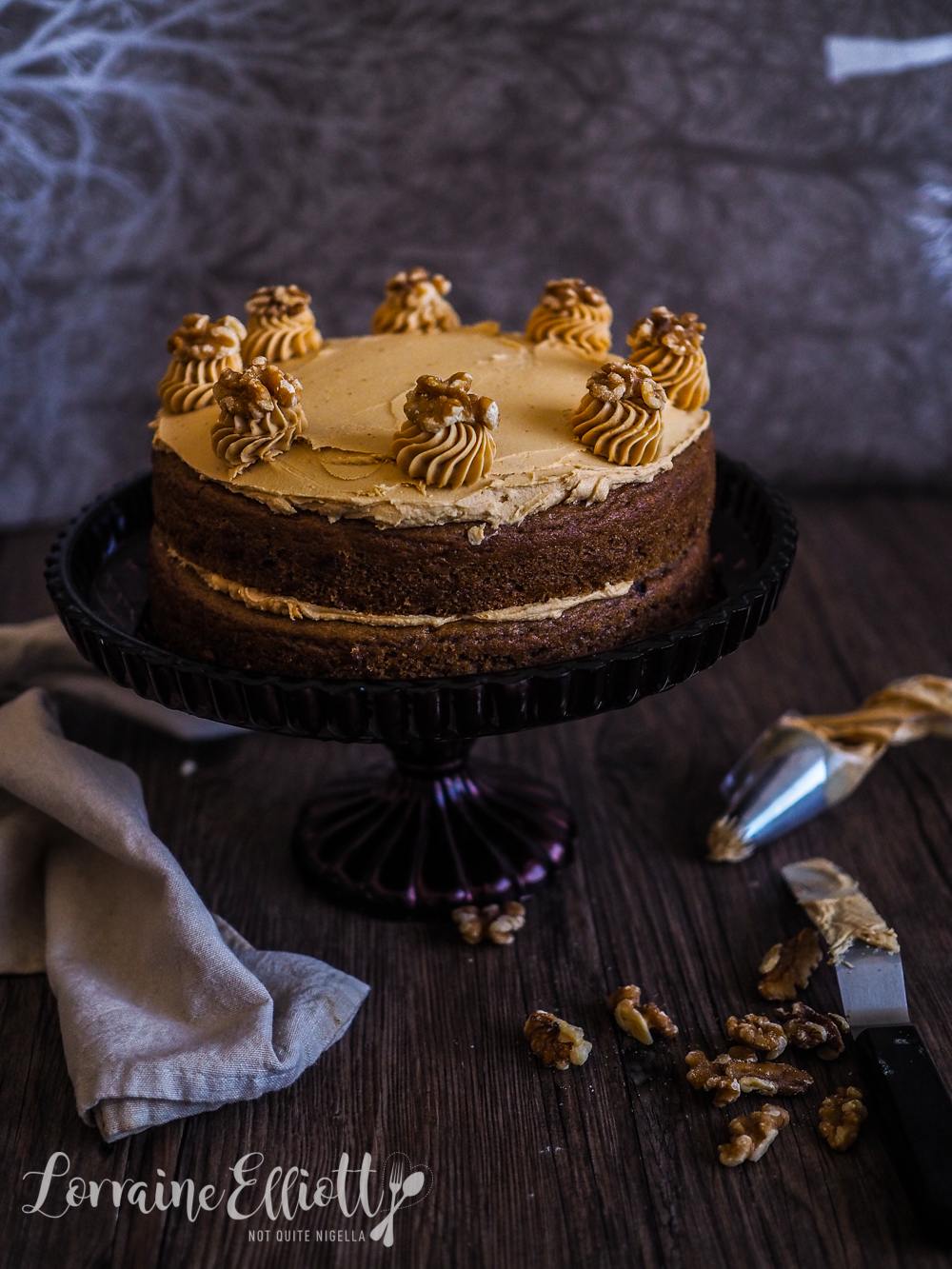 Step 5 - Spread a layer of the buttercream on one cake half and then sprinkle the sugary walnuts. Then place the next layer on top and spread the buttercream on this layer leaving about 1/2 cup of buttercream for piping on top. Use a fluted piping tip (I used a #8B) to pipe flowers and press a walnut on top.