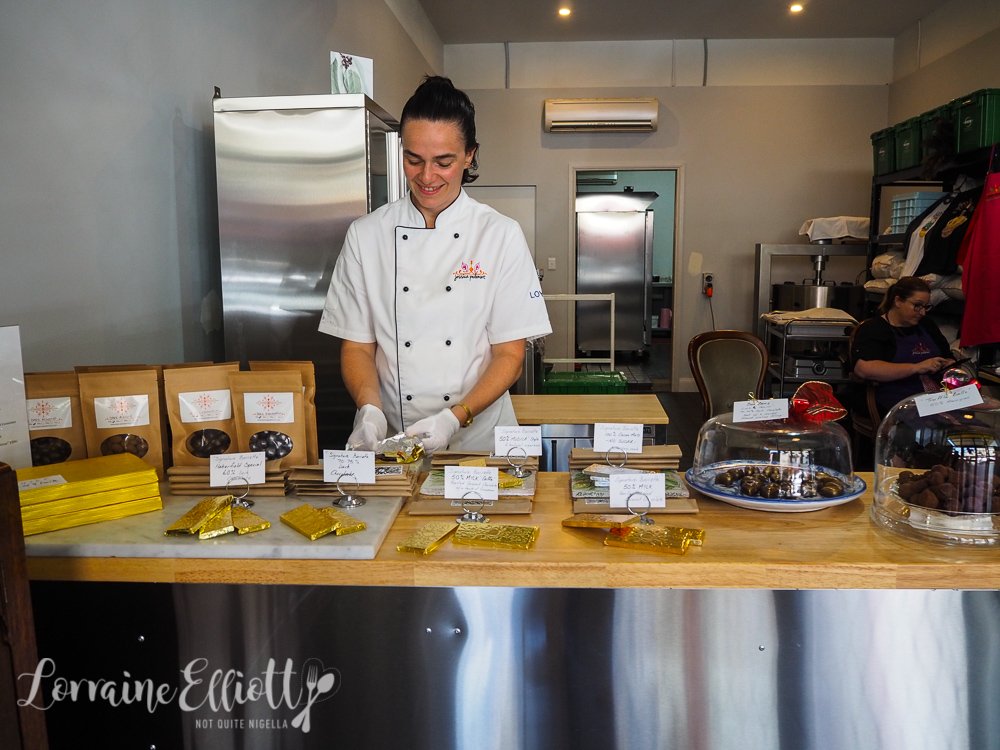 "I think that everyone is looking for something greater than themselves" says chef and chocolate maker Jessica Pedemont. She is talking about her new social enterprise venture South Pacific Cacao where she creates bean to bar chocolate in the inner west of Sydney. 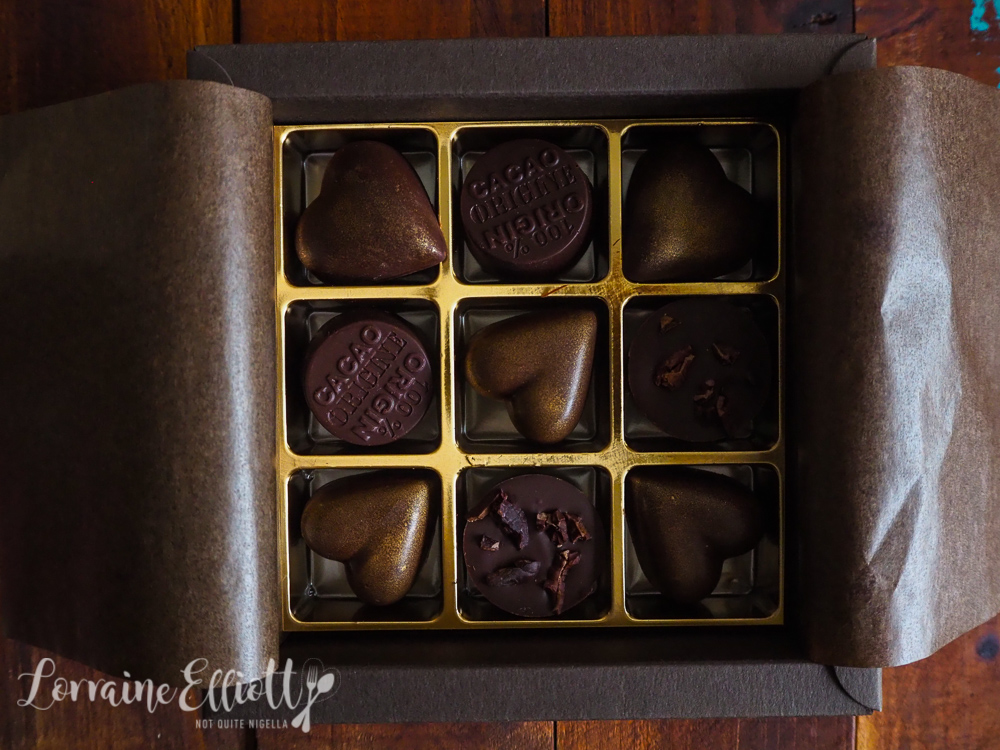 Her new shop on Haberfields' Ramsay Street has attracted its fair share of attention. Even on this lazy Sunday people peer in, sniffing the air thick and heady with the smell of her chocolate. 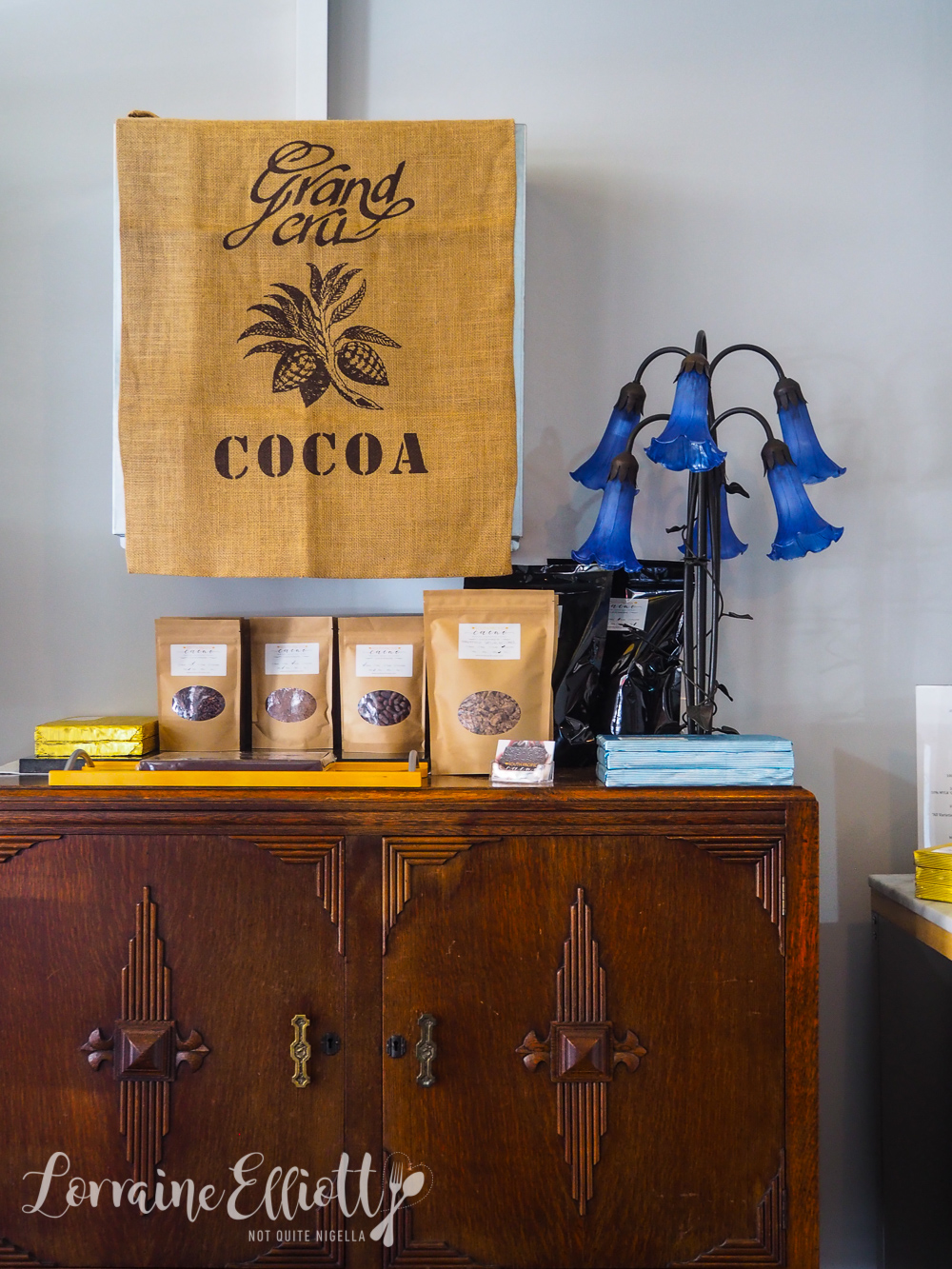 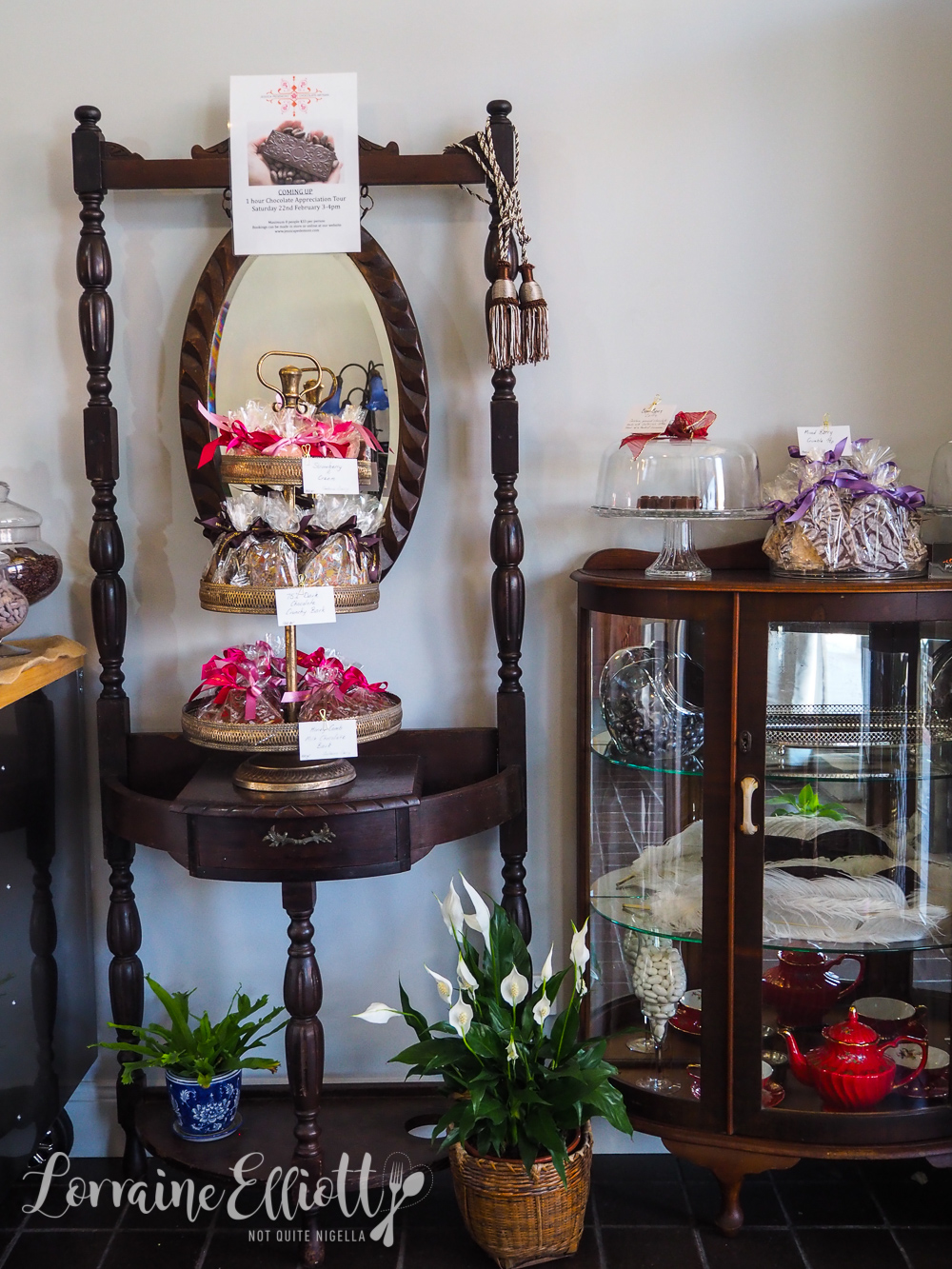 The first step of chocolate making starts with the beans. It was coincidence or fate that saw her meeting Brian Atkin. He is originally from the Solomon Islands and he has his own cacao bean business called Makira Gold. They discussed the idea of creating this social enterprise benefitting cacao bean growers in the South Pacific. Their growers earn up to double the amount they do supplying into the bulk cocoa market. 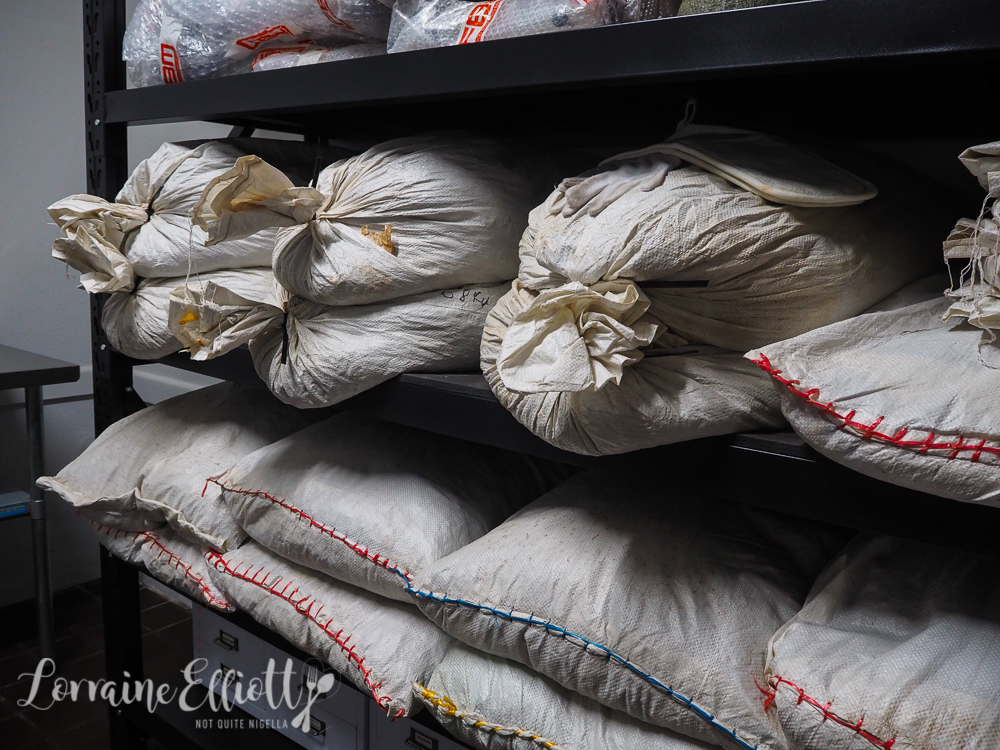 The money not only helps them earn a fairer wage but helps with buying new equipment that can be shared among the growers. Many of the growers are small and so they can't afford to buy drying sheds. "That's Agnes's beans," she says pointing at a bag of beans grown by Agnes Pilopaso from Guadalcanal. The beans are kept in Grain Pro super grain bags that protect the beans from seawater, rain and smoke. 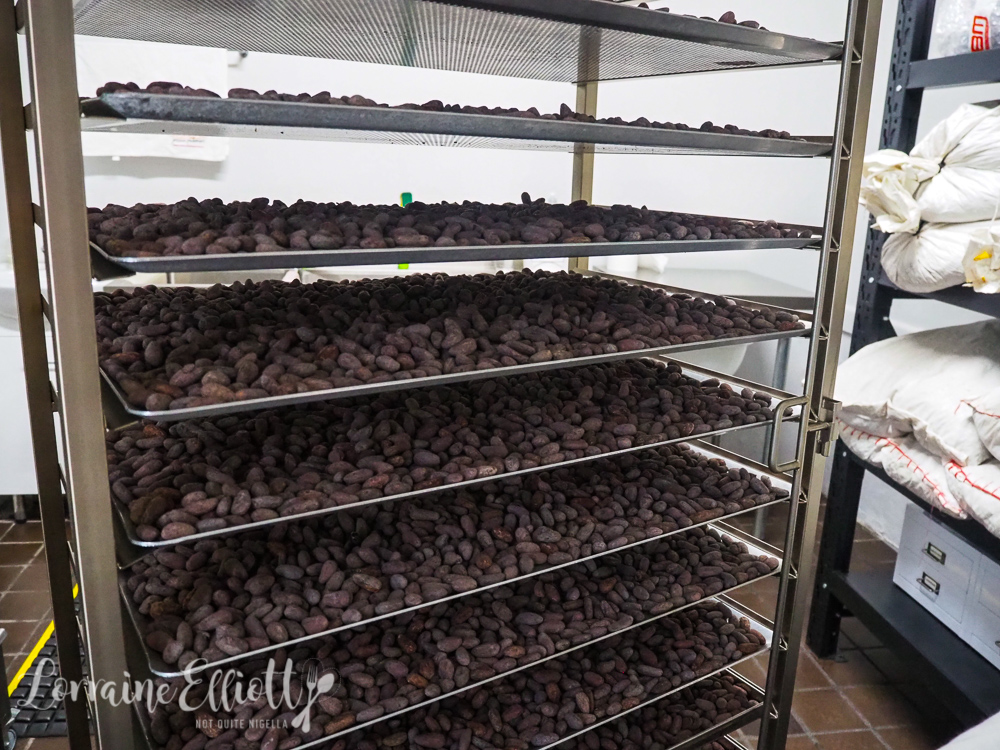 Jessica starts with roasting the cacao beans that have been picked through for skinny beans (beans without any meat in them) and twin beans that are separated for more even roasting. Occasionally you might find a "lucky bean" i.e. one without a husk. 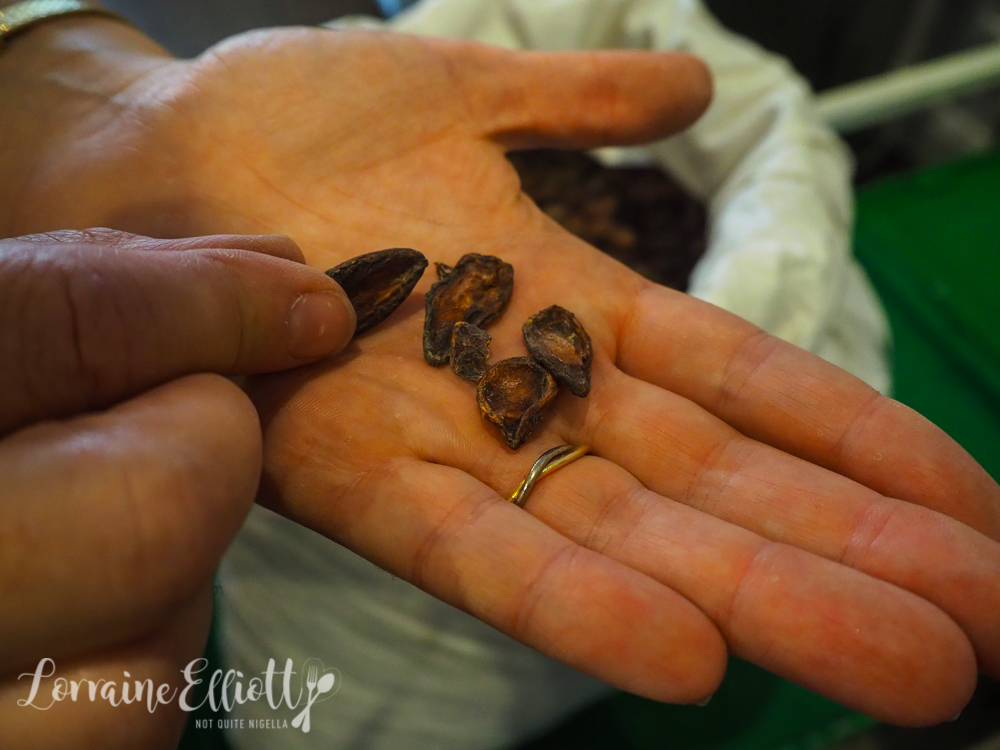 She says that with good quality beans you don't want to over-roast them but with lesser quality beans over roasting is common and after this they pump in lots of sugar and milk to produce a chocolate that masks the flavour. 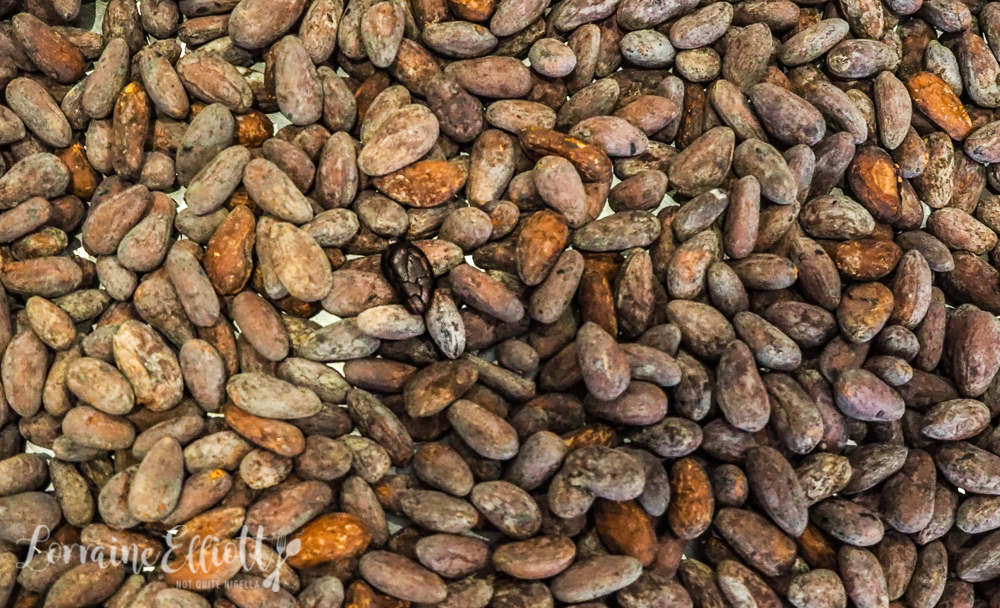 A lucky bean in the centre 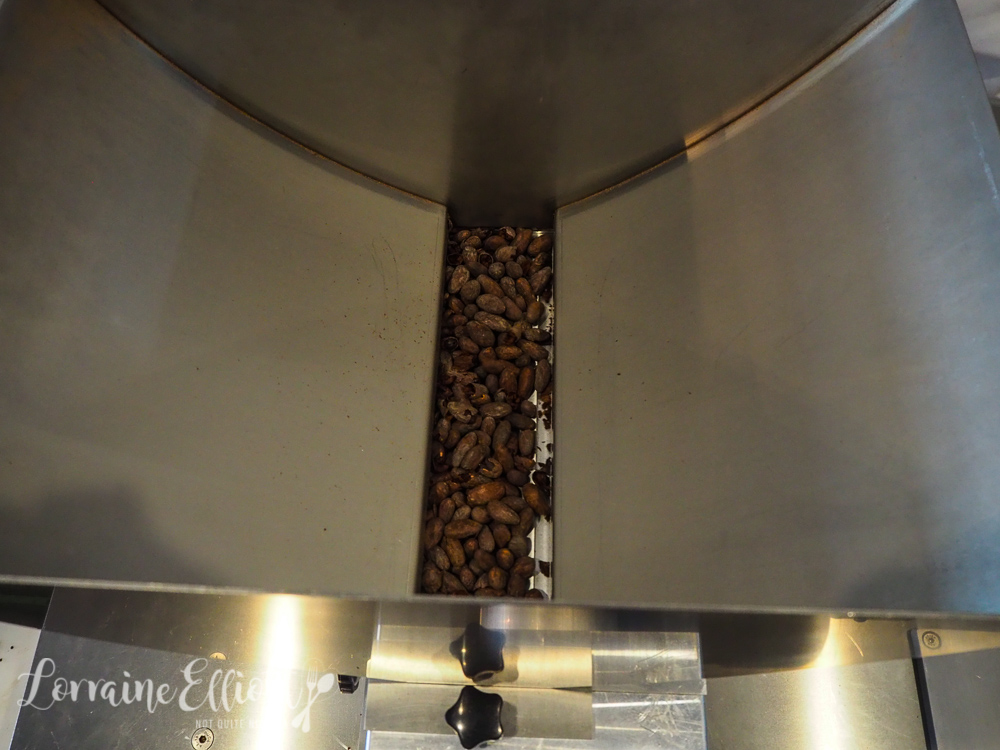 Winnowing or grinding the beans

"I’m making a granita out of it at my demonstration next week at the border food forum. You can infuse with cream, milk and much more to make custards, panna cotta this list can go on. After infusion you can compost the whole lot," says Jessica. 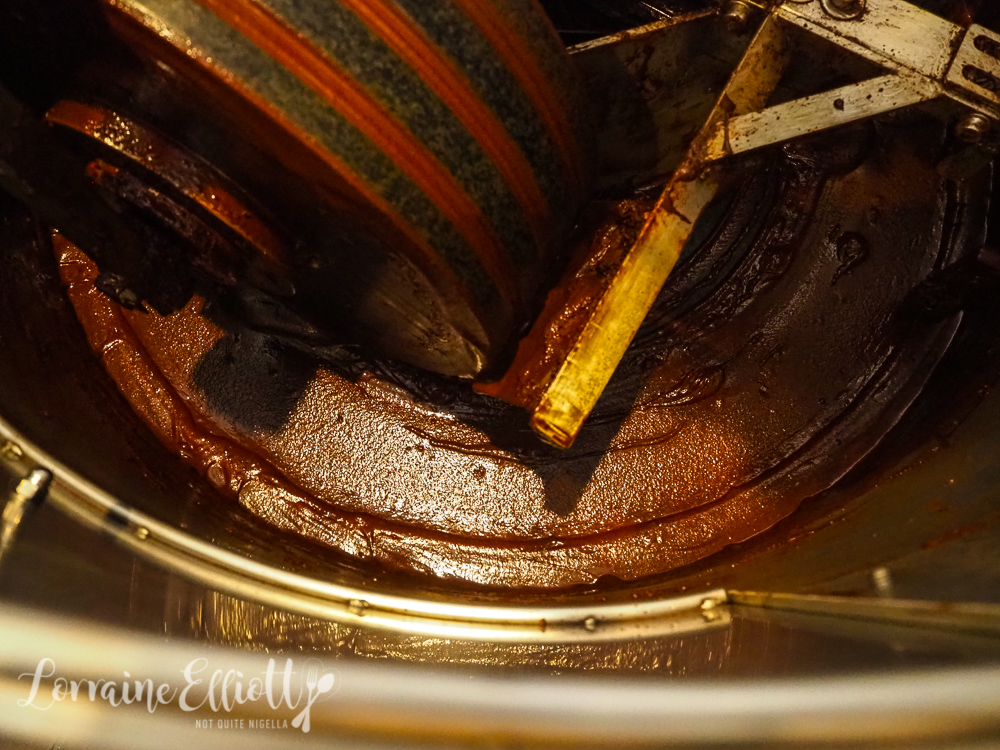 After this it goes into the 500kg/1100lb. melanger machine where the winnowed cacao nibs are then crushed and ground with enormous 45kg/100lb. granite wheels. They are then mixed with sugar and cocoa butter for anything from 24 hours to 4 days. 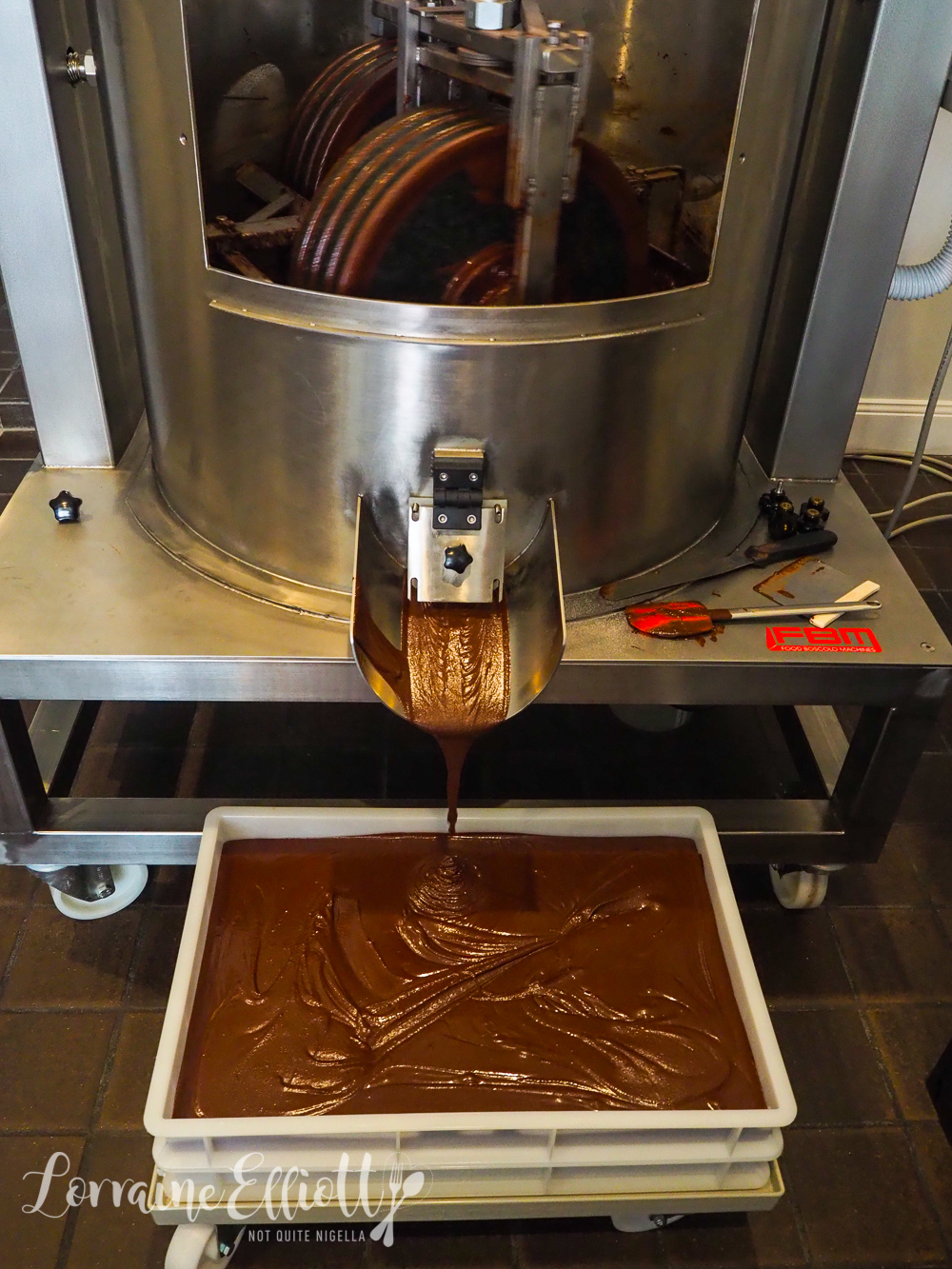 The machine grinds and conchs the cacao beans. Conching is important for the development of flavour and removes the volatile aromas from poorer quality cacao beans. From there it is decanted into large trays. She works with chefs to create custom blends and holds professional classes including a 3 day bean to bar class and a 2 day praline and panning molding class. 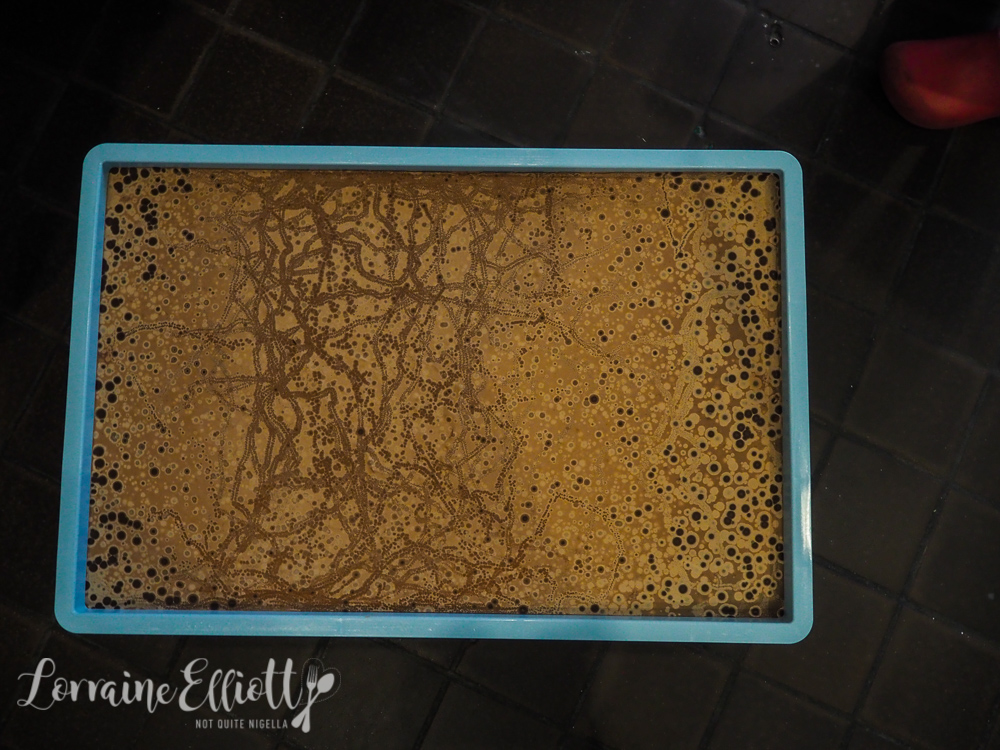 She also holds general tours to the public. There is a 1 hour class that takes guests through the bean to bar process, make their own chocolate bar and ends with a chocolate and tea tasting. This will be held on February 22nd and is $33 per person with a maximum of 8 people. 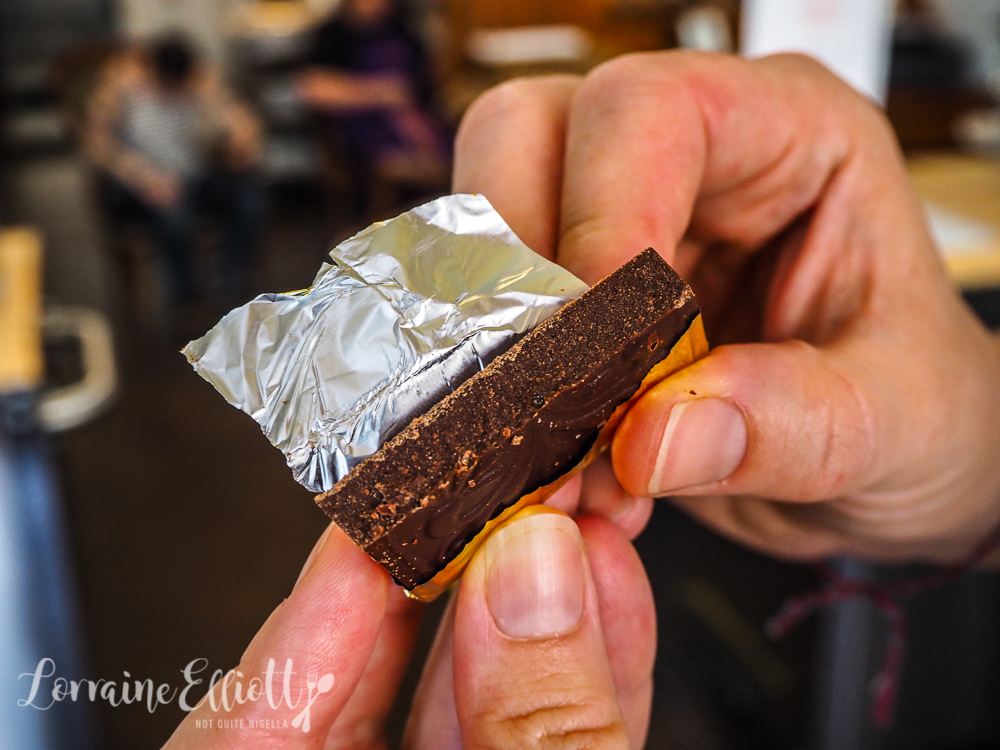 Jessica is currently grinding up a very interesting chocolate type from Modica Sicily, a small town dubbed the "home of chocolate". "Almost 3 years ago we stumbled across a beautiful little old town called Modica and as we walked from shop to shop. After the fourth chocolate shop in a row we knew something was up with this town and did some googling when we got back to our accommodation and it blew my mind."

Modica chocolate is ground with stone by hand and the resulting chocolate has a slightly gritty texture where you can see tiny grains of sugar and cacao nibs. She has recreated this chocolate and it is sold in store and it's well worth a try. 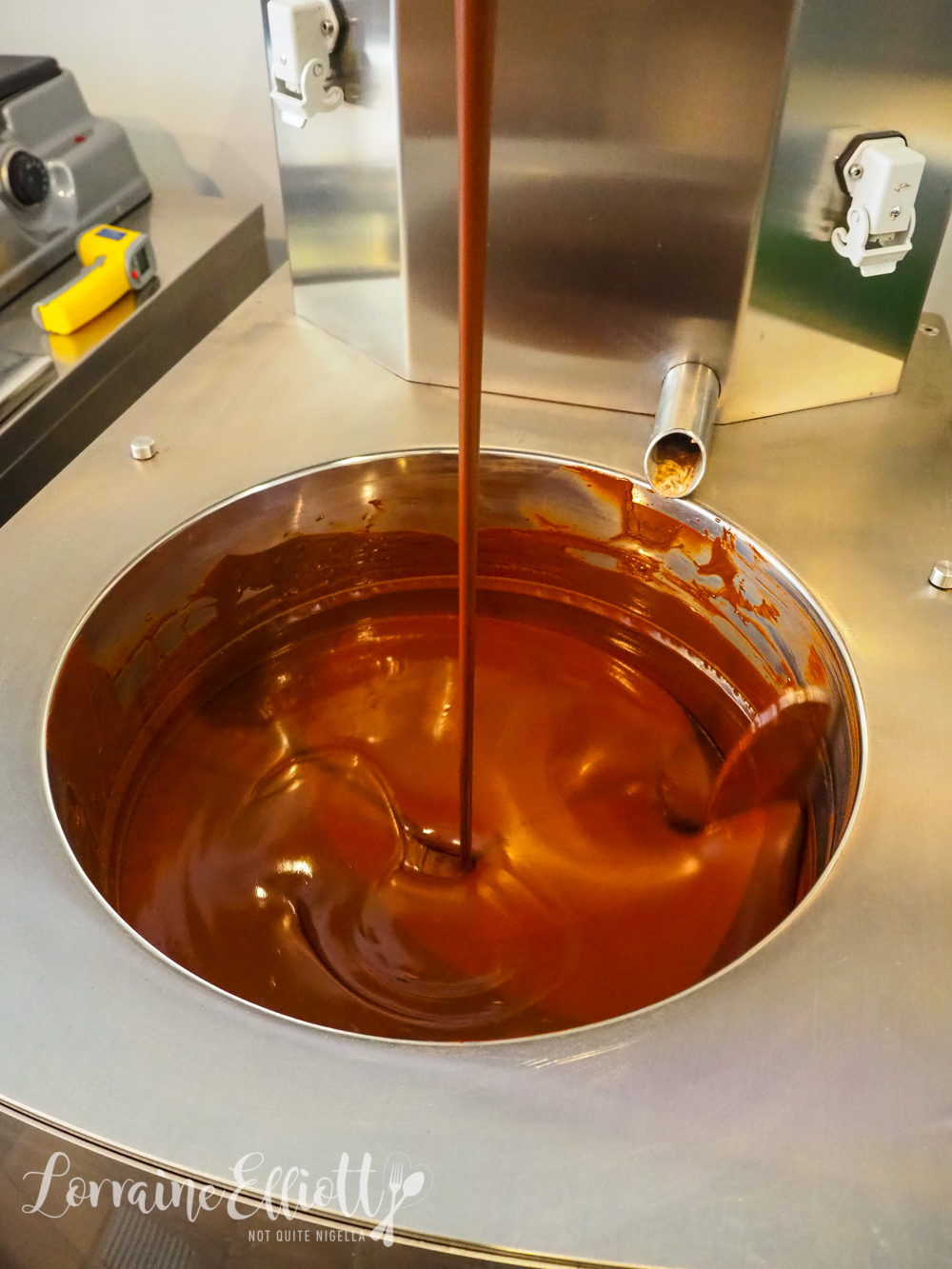 All of her chocolate is vegan and gluten free with no lecithins added and she uses coconut milk. She will retail some items using Felchlin white chocolate that contains dairy including a striking white chocolate bark with mixed berries and rice krispies. 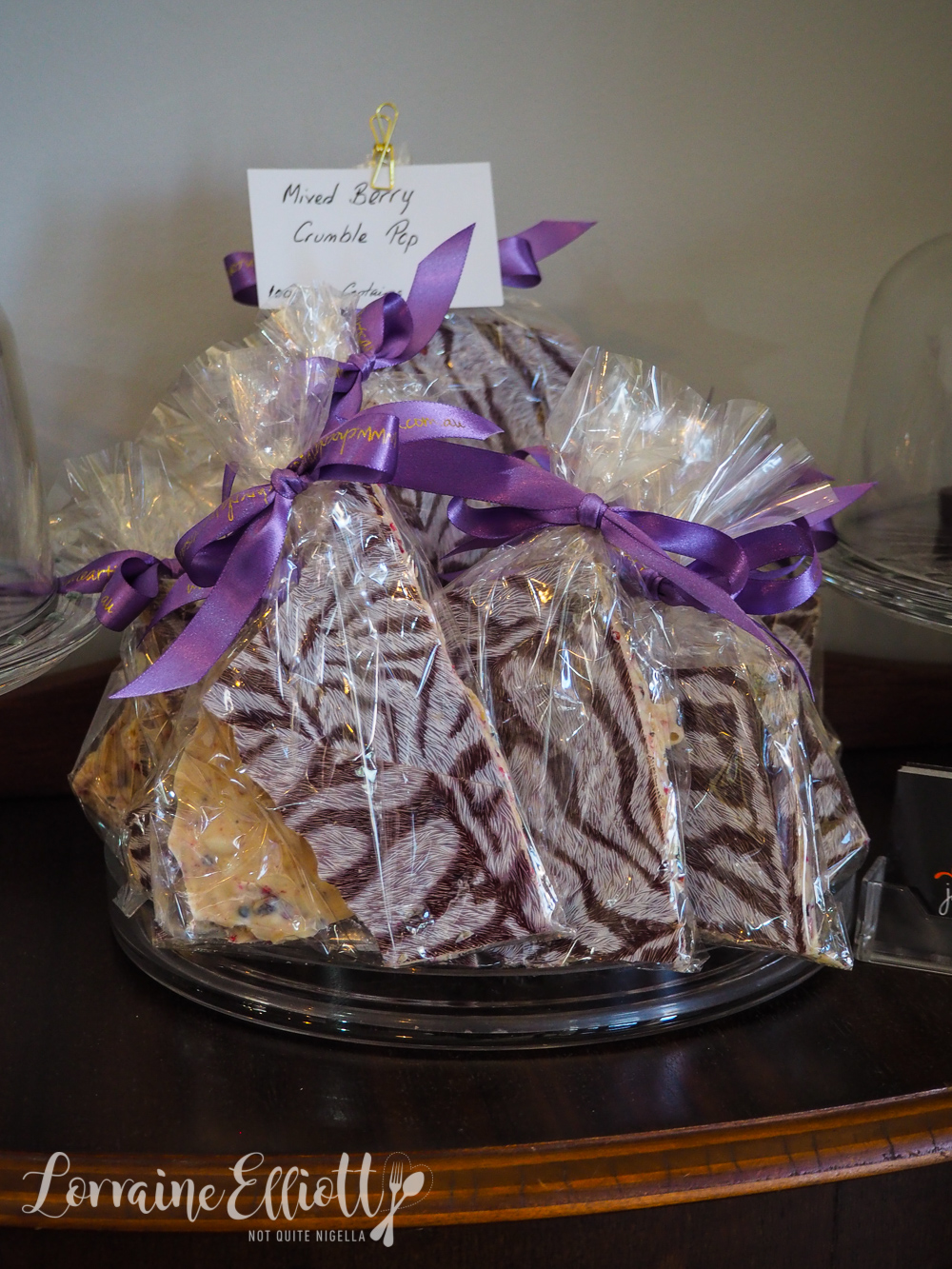 Another interesting item that she will be selling is "chocolate tea". Not a tea as such it is made from the husk of the cacao beans that is separated in the winnowing process. You treat it like a tea like you are using tea leaves and steep it in hot water; five minutes is good for a pot and you can infuse the pot up to three times. 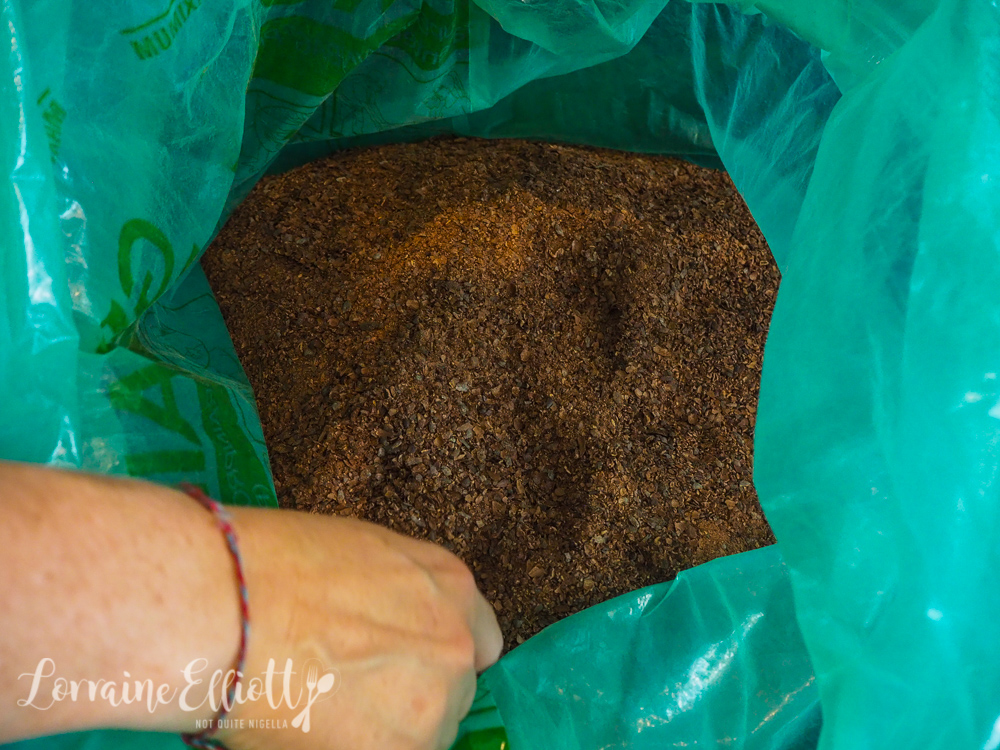 Cacao bean husks, separated from the nib during the winnowing process

This chocolate tea is rich in theobromine that is said to give the drinker greater focus over the jitters that caffeine gives. Theobromine does not affect the central nervous system and the chocolate tea is 99.5% caffeine free. It also has anandamide, a neurotransmitter that is dubbed the body's own natural anti-depressant. 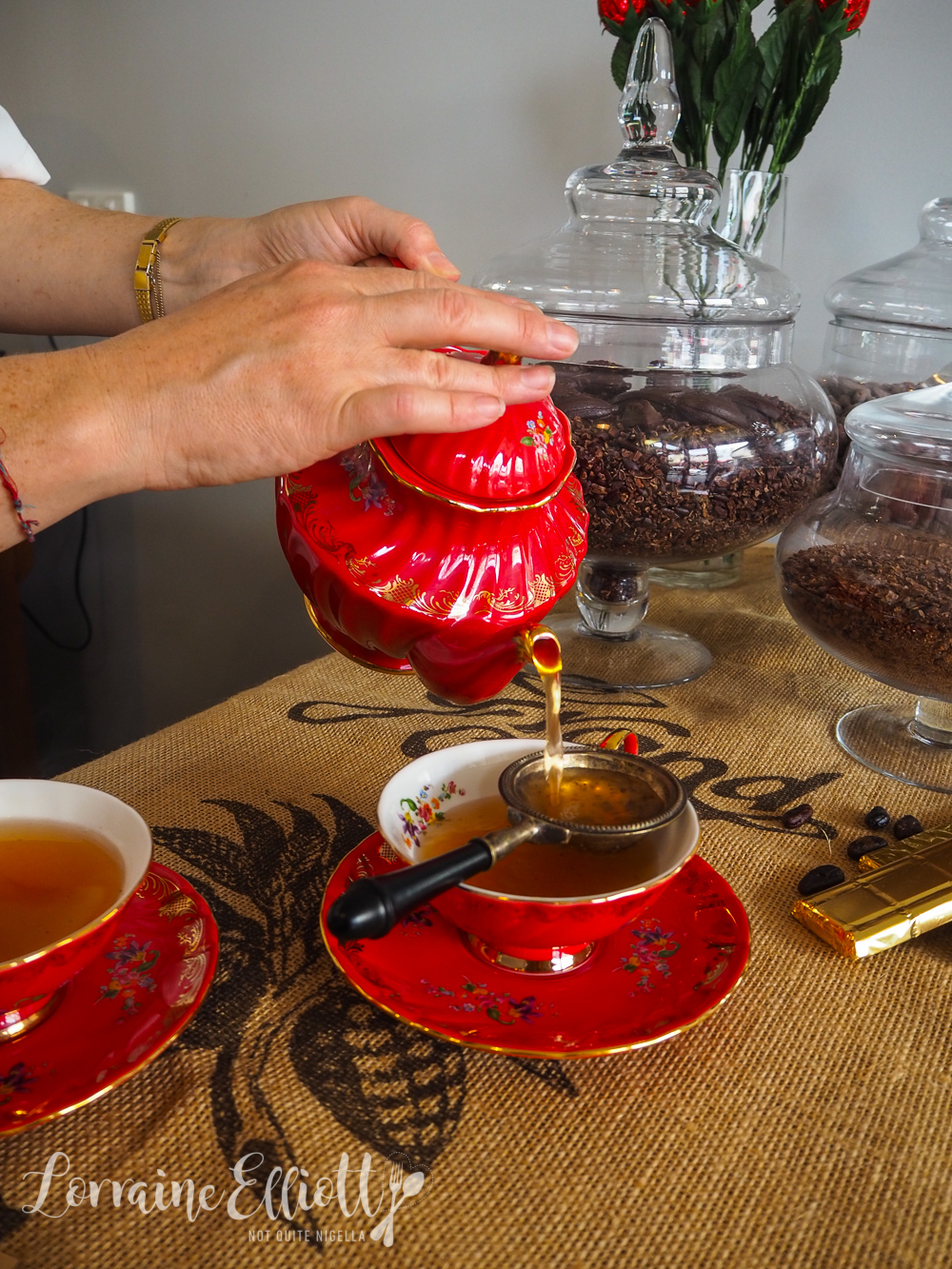 When the tea is poured it has tiny specks of chocolate and when sipped the distinct aroma of chocolate with a nice buttery texture to it. It's like a hot chocolate flavour without the richness although you can also add sugar and milk to it. 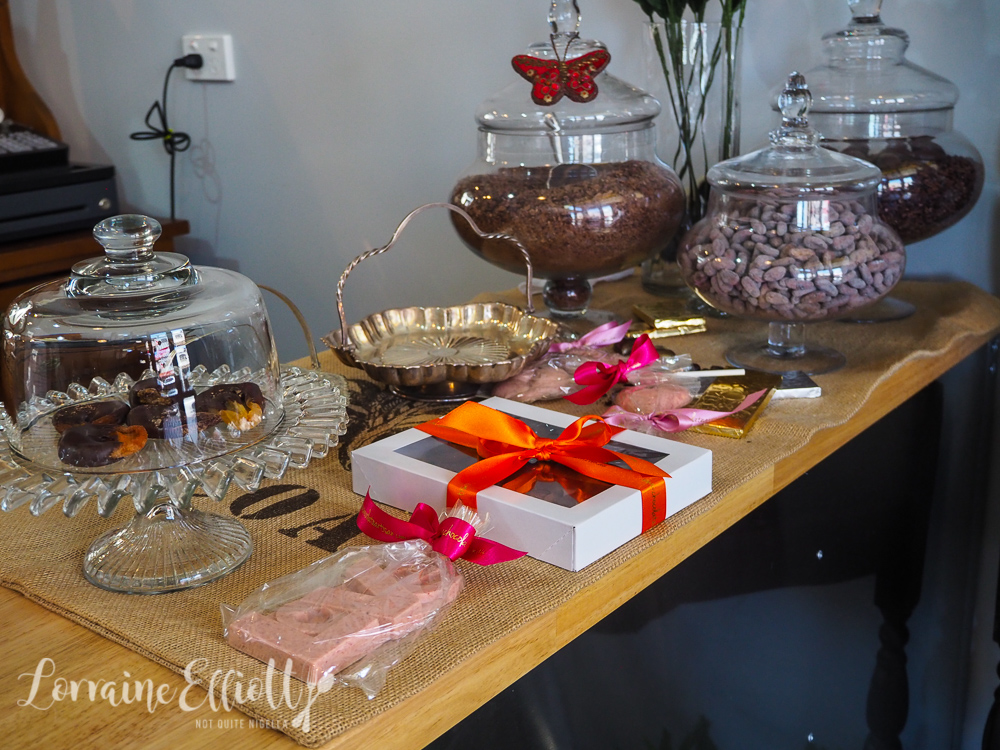 Her shop that opened up last week will sell a range of bon bons, chocolate dipped dried fruit (the fruit from The Singing Magpie in South Australia) and chocolate bars ranging in size up to 1 kilo blocks. 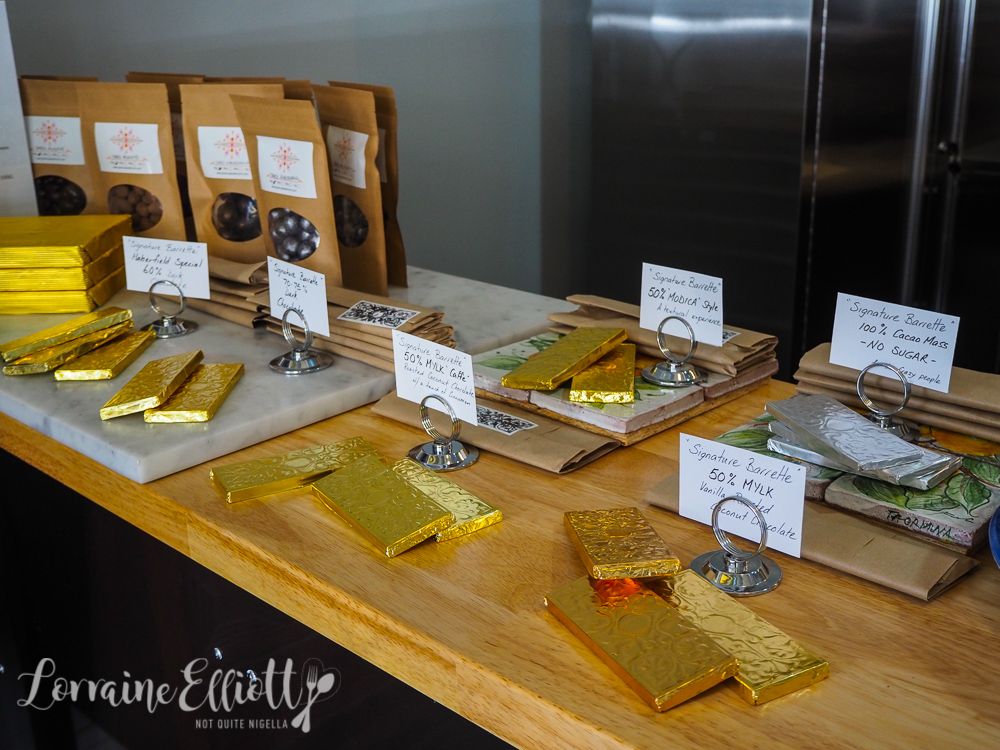 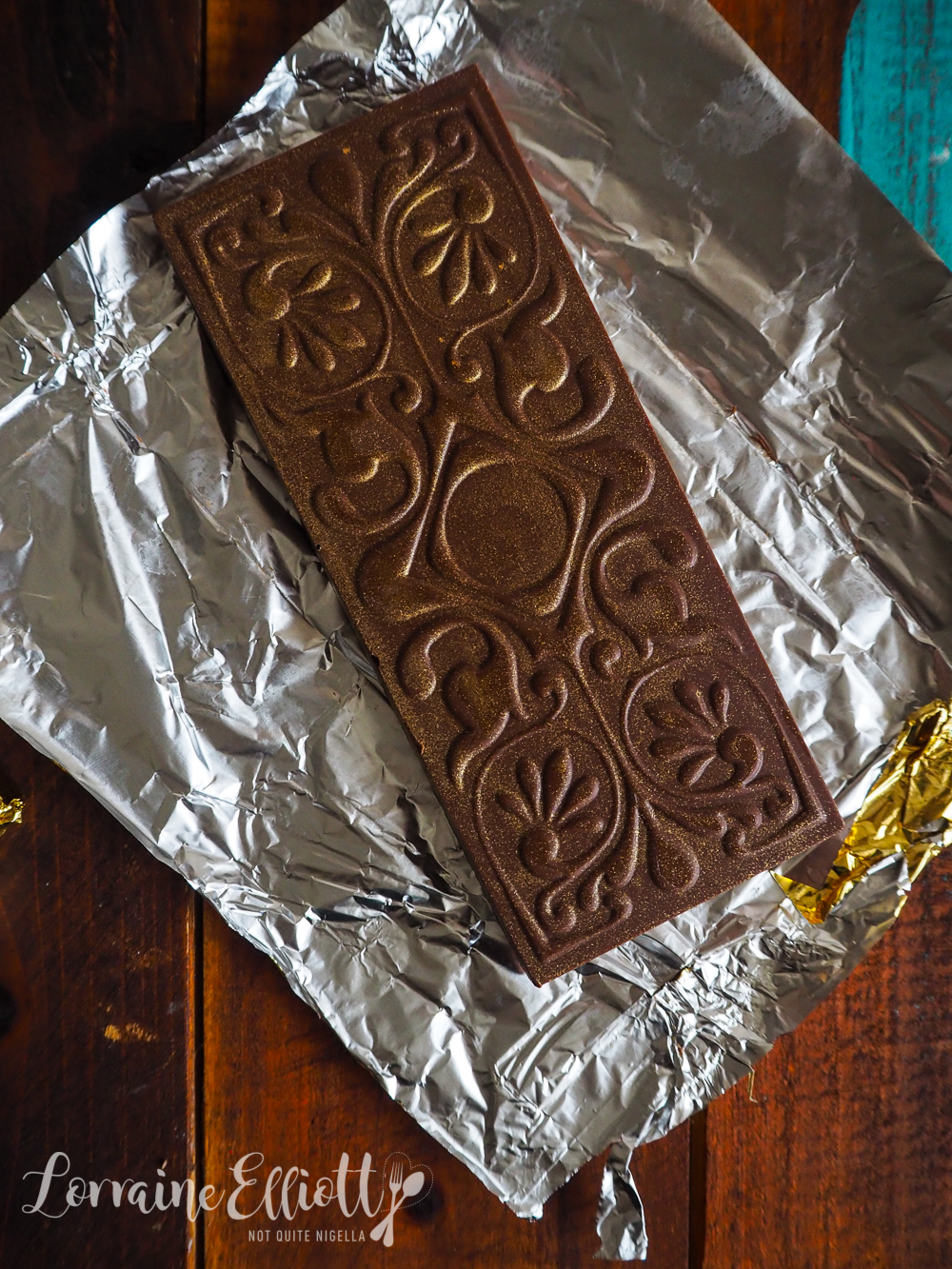