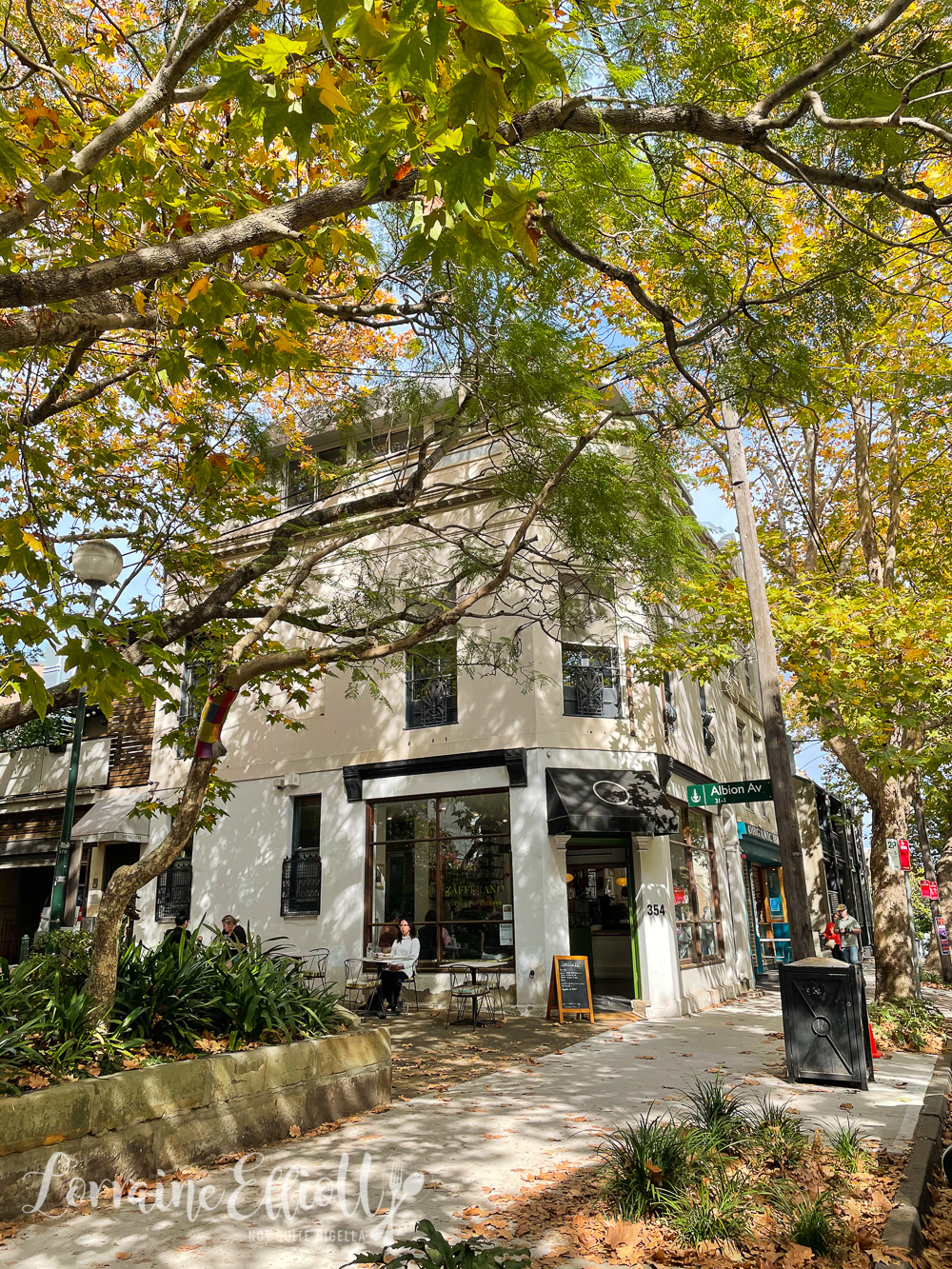 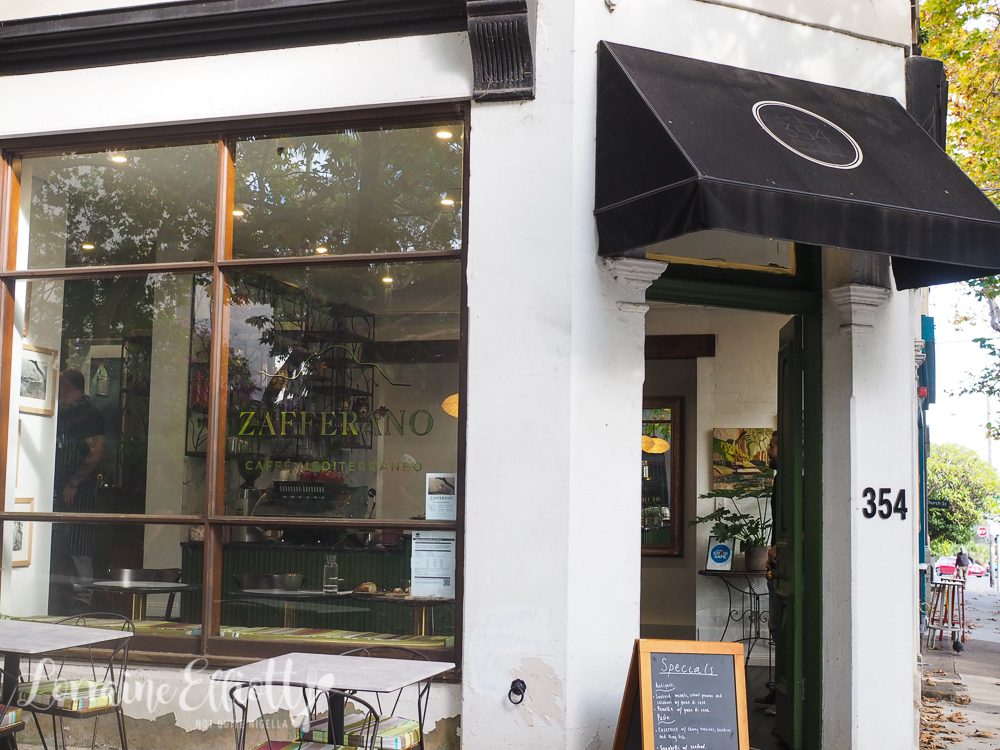 It took Carm all of two minutes to respond in the affirmative when I asked her if she wanted to go to Zafferano cafe. I'm convinced that she knows every Sicilian person in food in Sydney and when I arrive she's sitting down chatting to her friend Simone Crivello the owner and chef at Zafferano Caffé Mediterraneo. 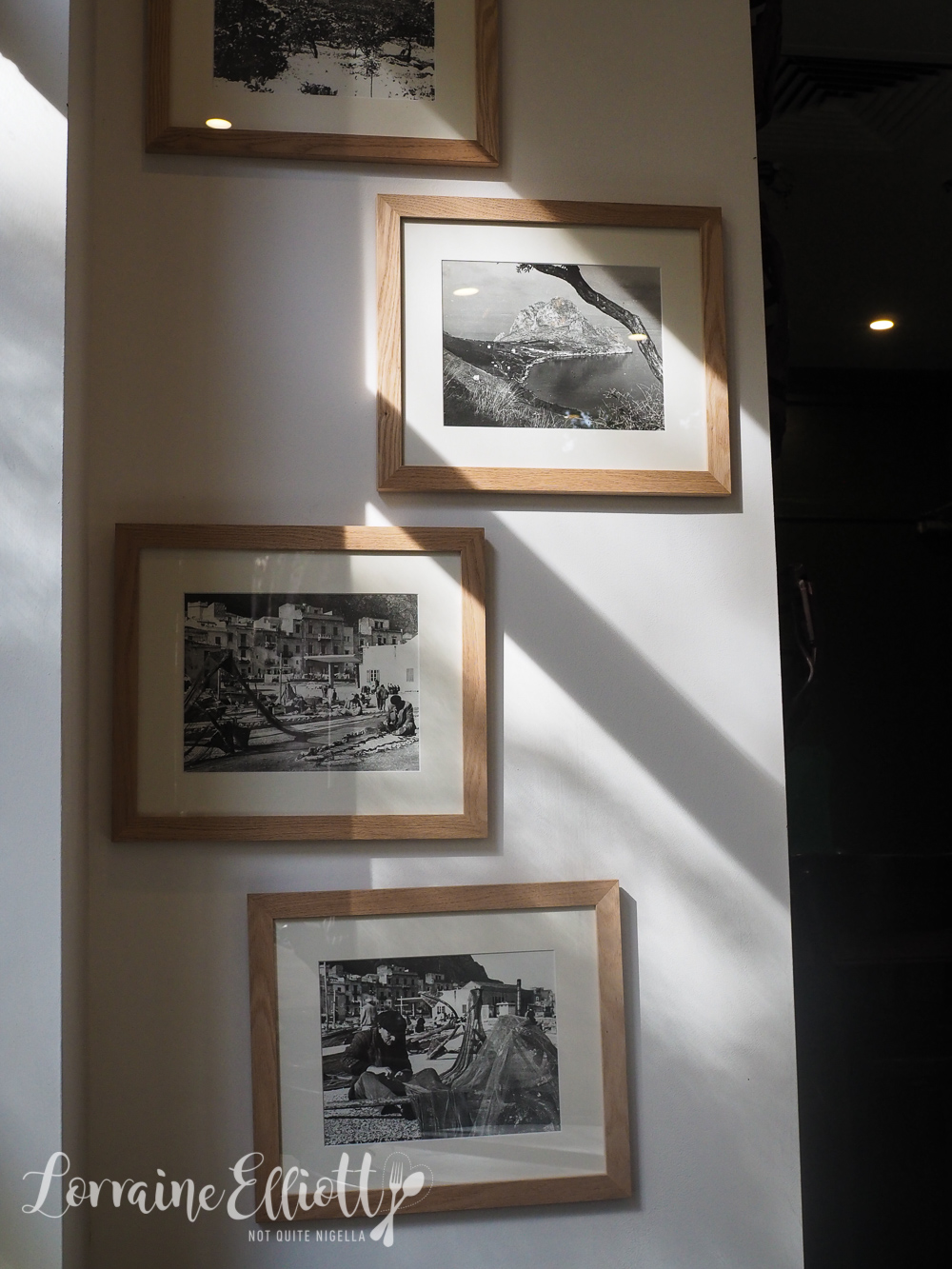 Zafferano is named after Capo Zafferano a province of Palermo, Sicily where Simone spent a lot of time with his mentor and father figure Giovanni who passed away at age 78. The cafe's name is a tribute to him. "I feel him here everyday," he says patting his heart. 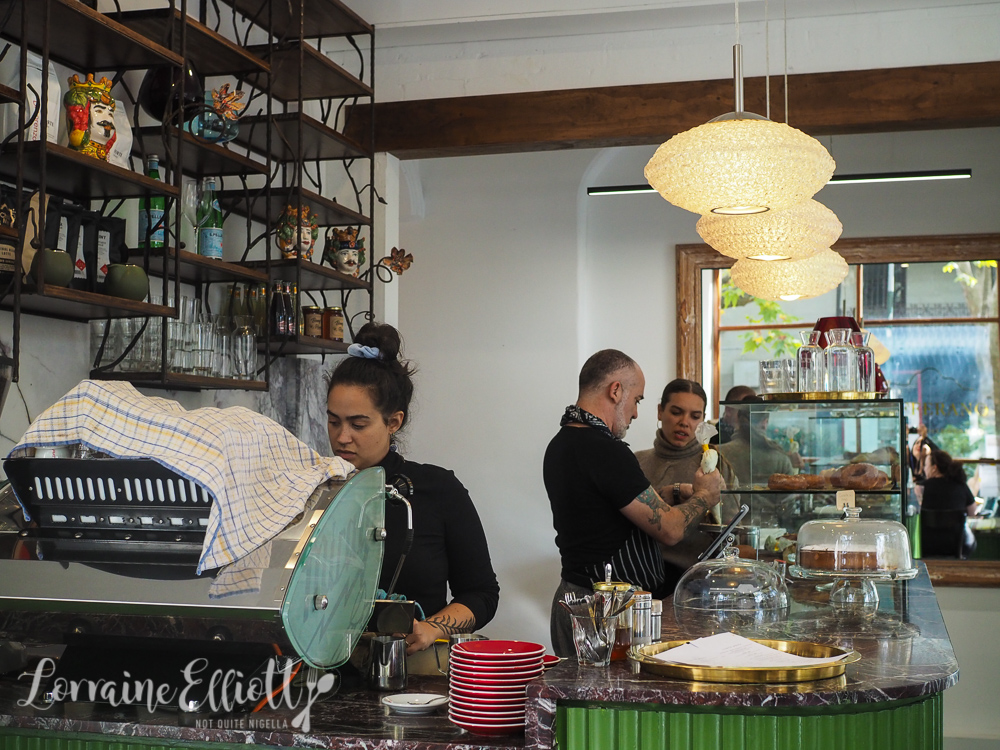 Simone was formerly the chef at Gigi's Pizzeria in Newtown. He comes from a family of restaurateurs-his father's seafood restaurant Trattoria Francu U' Piscaturi has been operating since the 1970's and he grew up in Palermo. He and his partner Bella Galloway own Zafferano Caffé. 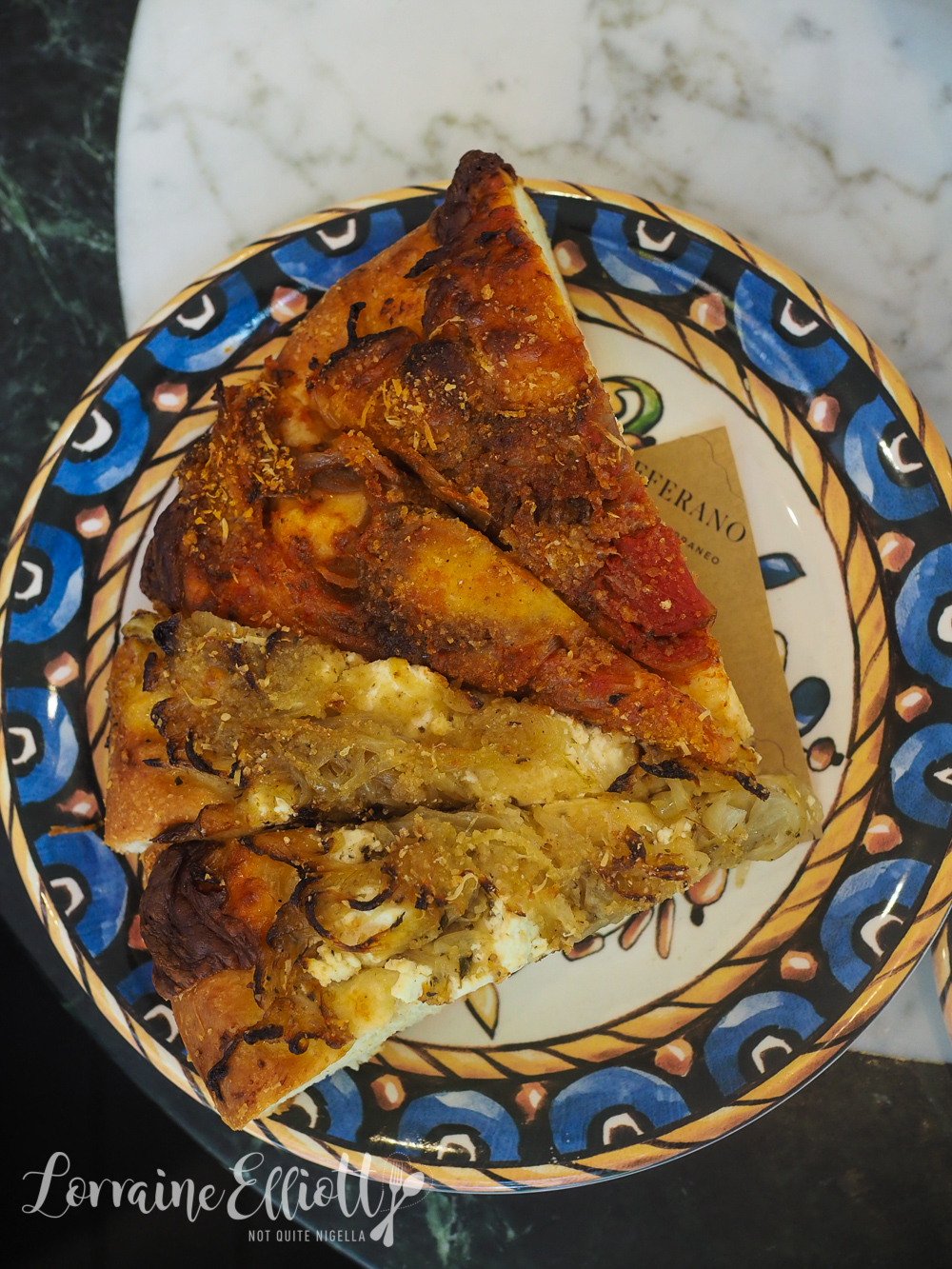 So you've heard of pizza and focaccia but have you heard of sfincione? Carm explains that sfinci means sponge and that's what this fluffy, spongey and soft bread is like. There are two types baked here every morning: a Sfincione Bagherese with anchovies, buffalo ricotta, onion and pecorino cheese and a Sfincione Palermitano with tomato, pecorino, breadcrumb and onions. Both are divine-if I can offer any tip it's to get both because life is short and they're both equally delicious. 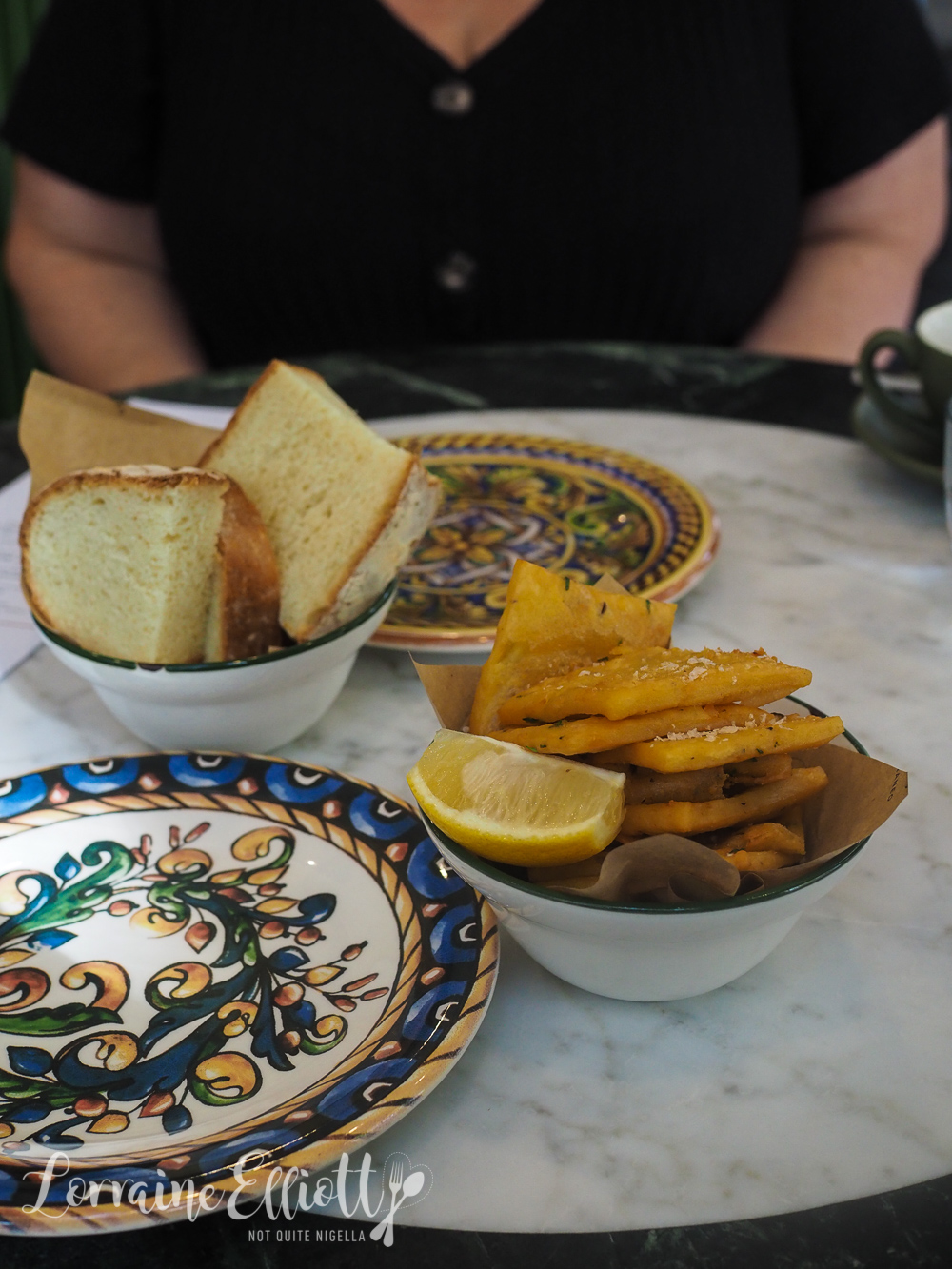 Another Sicilian specialty is the Panelle or Sicilian chickpea flour fritters. They're made of a dough cut into squares and deep fried and holy heavens they're good. Served simply with lemon and salt I dare anyone to stop at just one. This and the Sfincione are my favourite things. 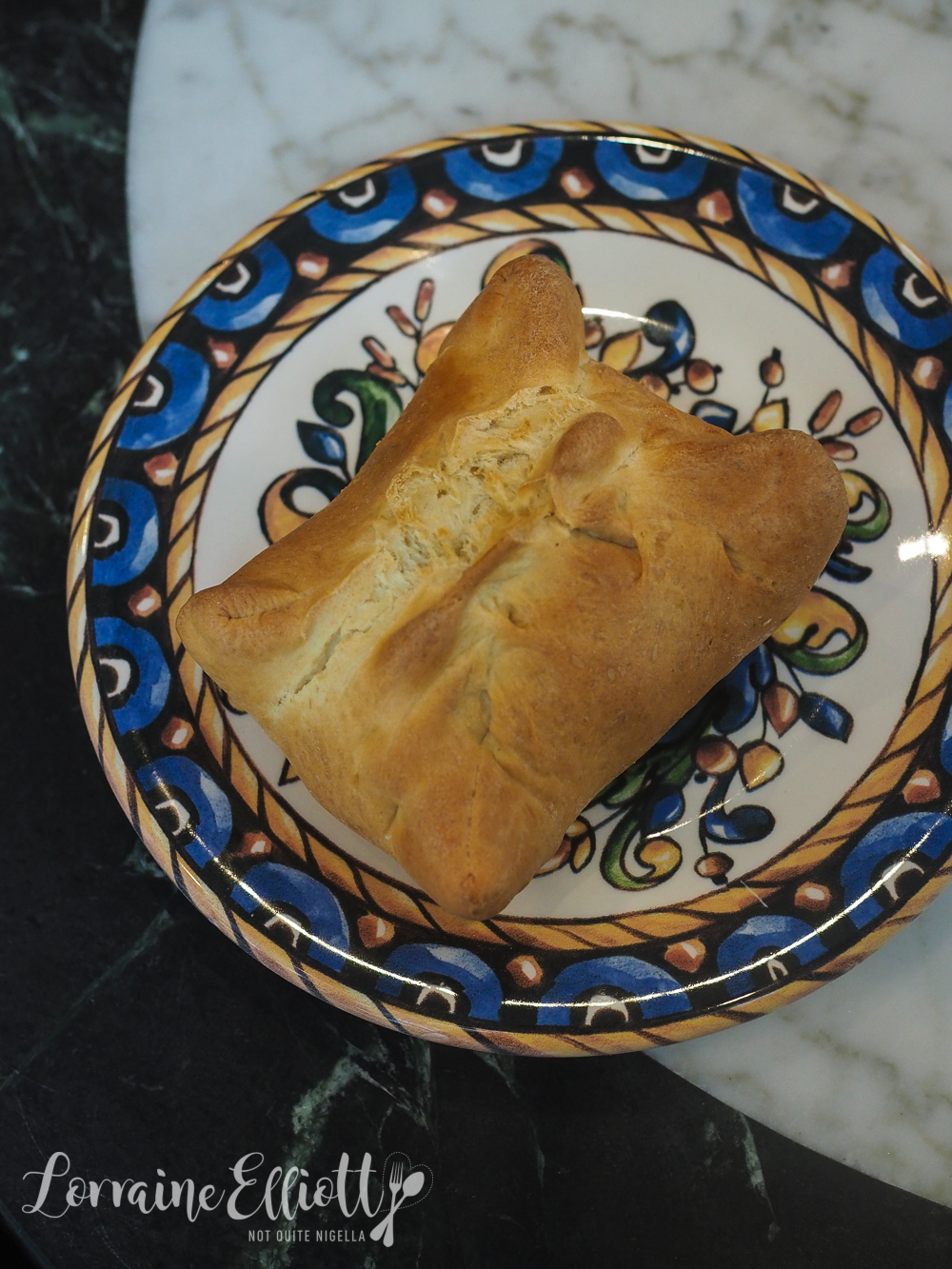 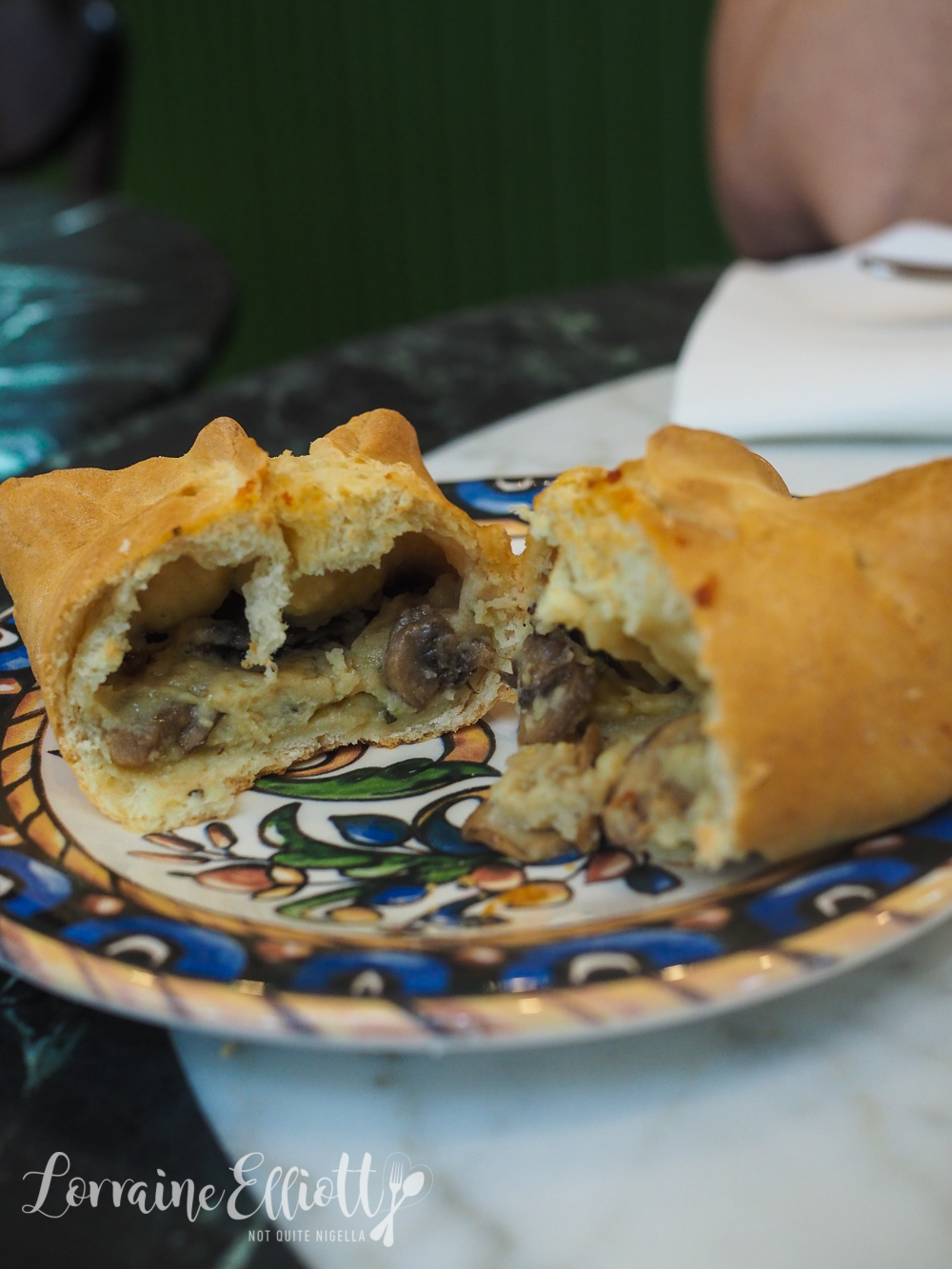 The faggotini are small pastries made with a simple bread dough filled with mushrooms, bechamel and garlic. They're on the breadier side of things and are vegan. 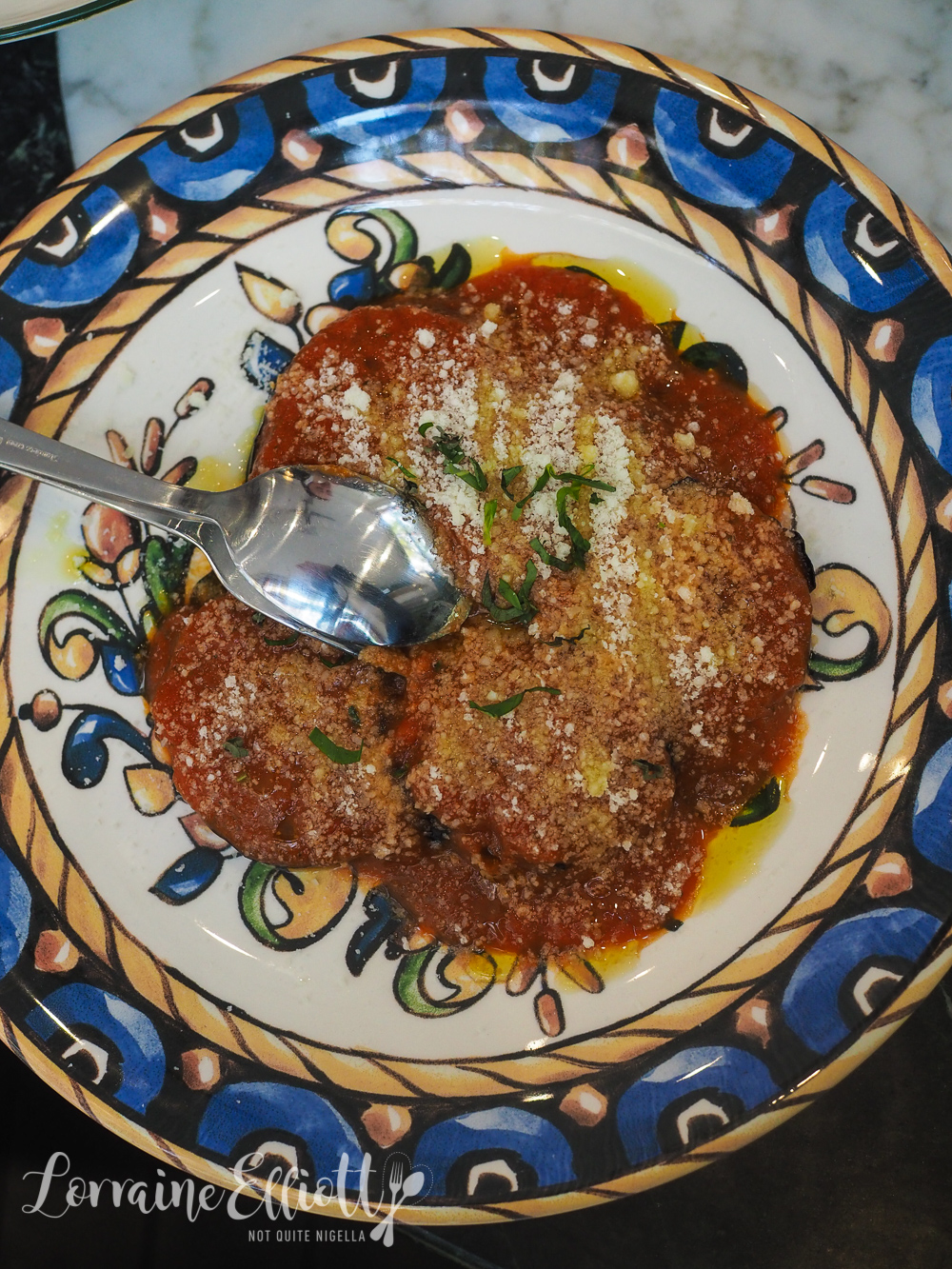 Carm is ordering a hit list of Sicilian specialties. The eggplant parmesan is a restaurant style version of the home classic. "Everyone household has a different recipe," Carm explains. There are layers of grilled eggplant, tomato sauce and cheese. Others add breadcrumbs, others deep fry the eggplant slices. 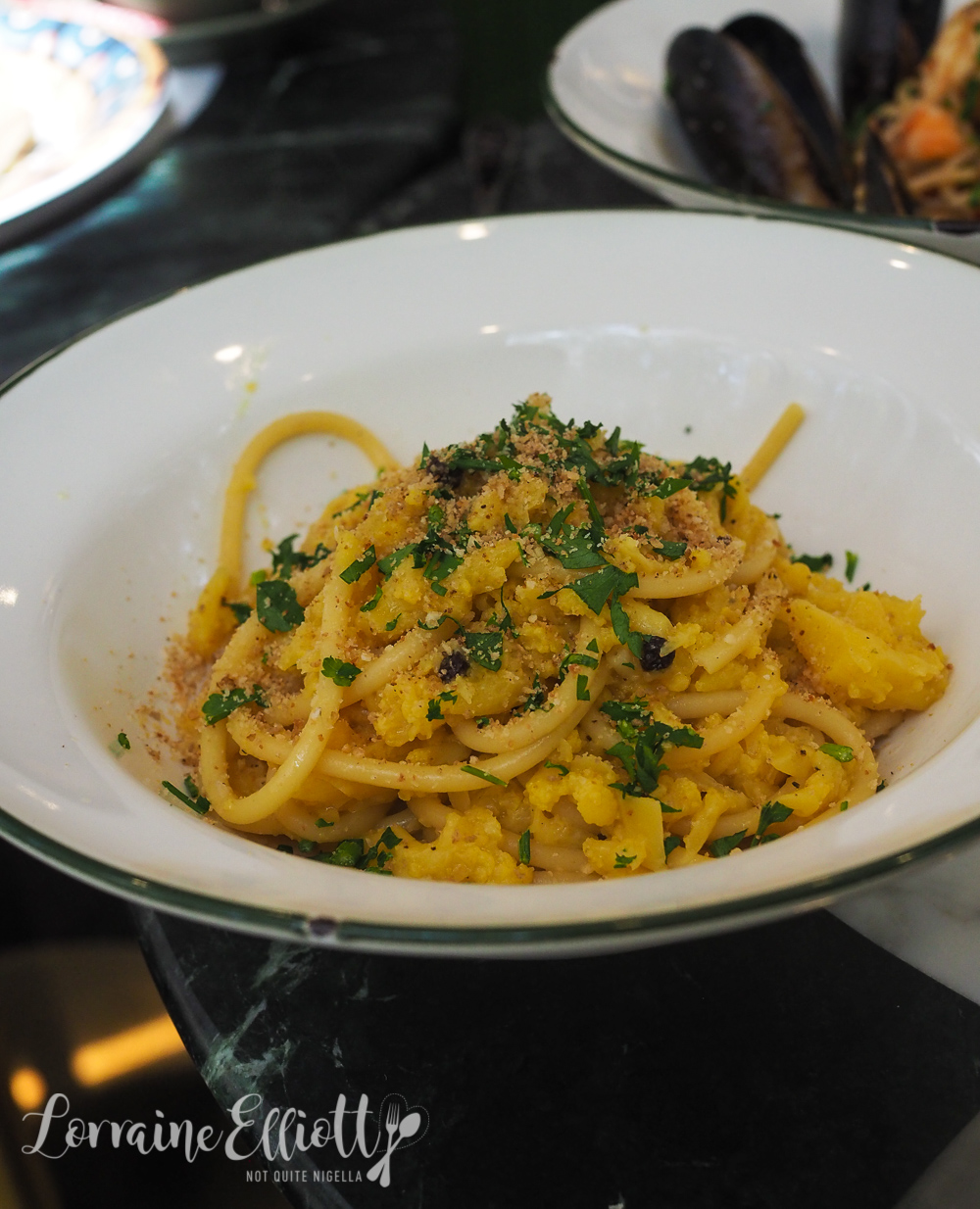 Pasta wise the bucatini with cauliflower is classic Sicilian dish made with cauliflower, pine nuts, capers, currants, saffron and shallots. Simone explains that they would normally make it with anchovies although they're feeling out their Australian clientele who proclaim not to like anchovies (you can ask for them to be added). 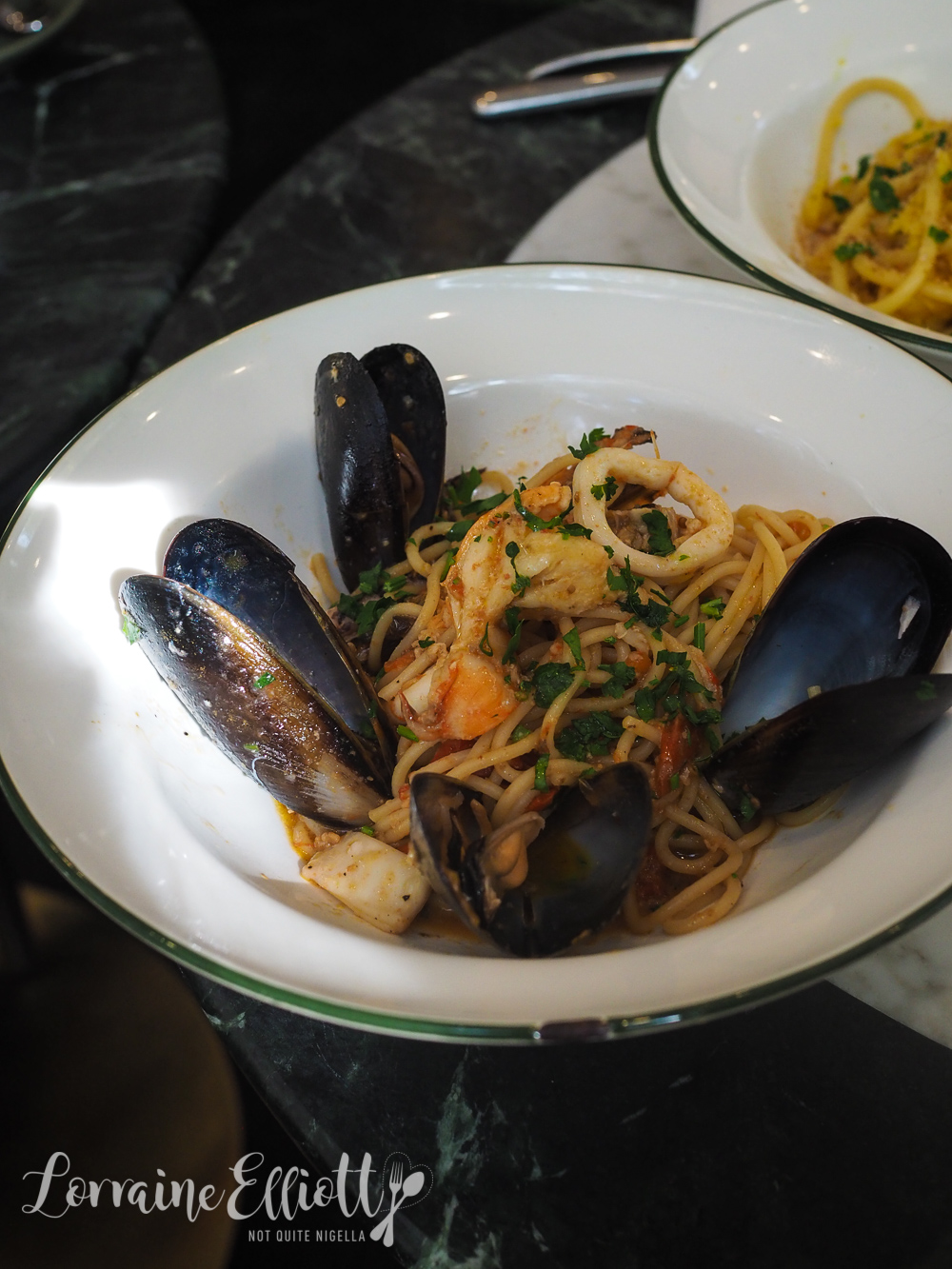 "You'd be hard pressed to find a tomato sauce," says Carm. Sauces in Sicily tend to be Bianco or white sauces. The seafood spaghetti has the flavours of the sea with mussels and prawns paired with a nice hit of garlic. 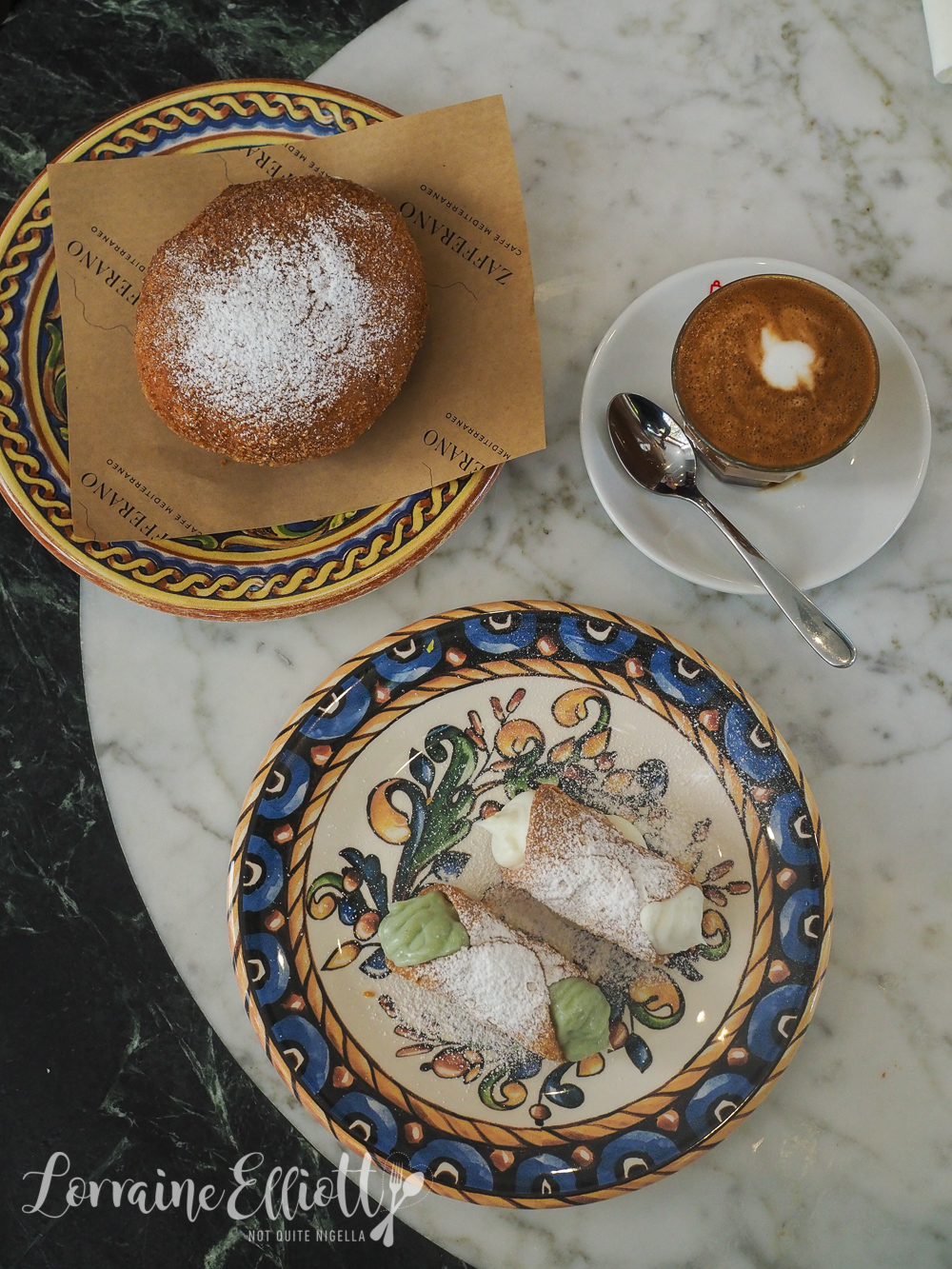 The dessert selection is made up of cannolis in ricotta and pistachio flavours. These are made using Sicilian cannoli shells although Simone has plans to make his own. 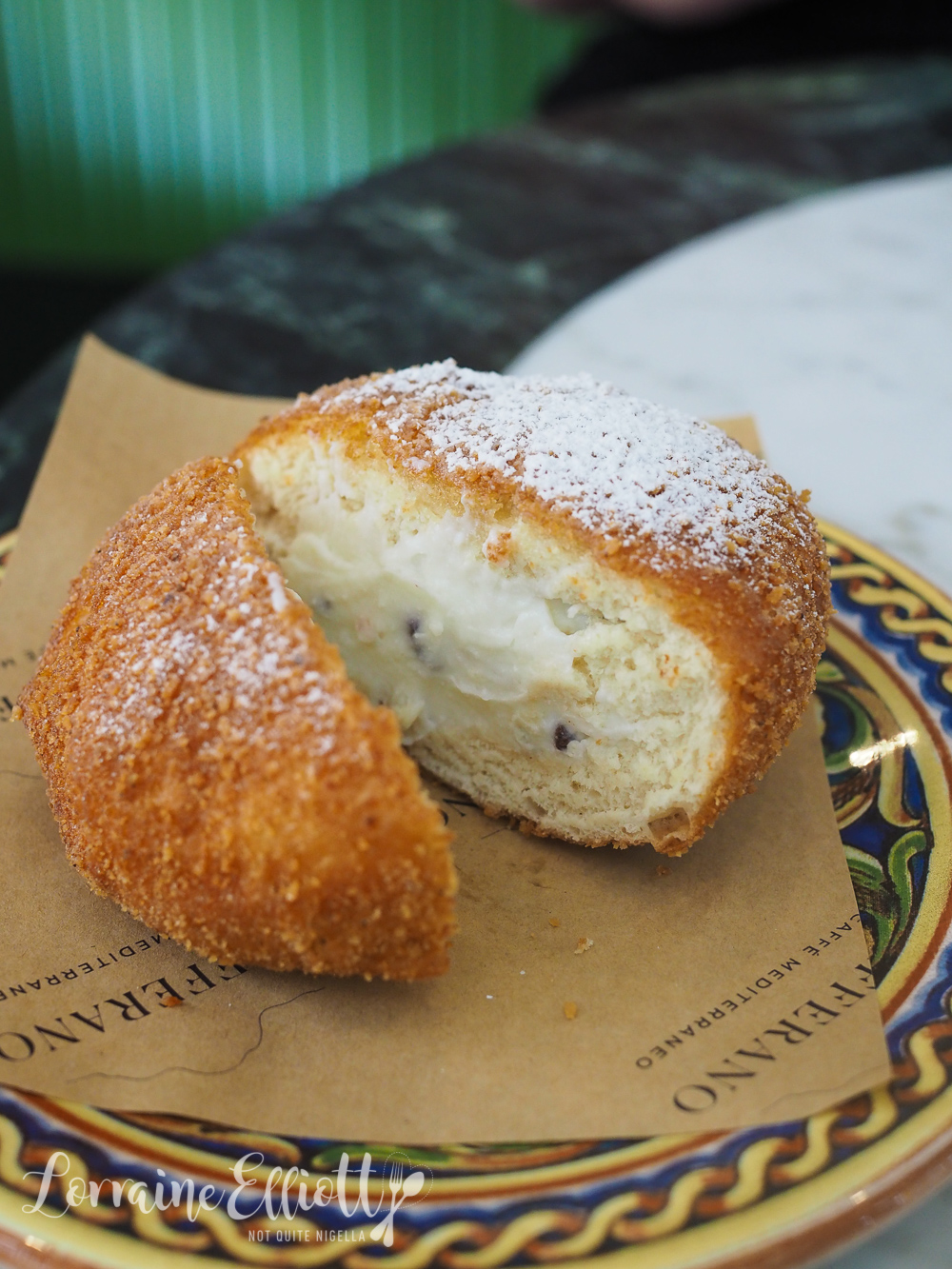 In the meantime satisfy your sweet cravings with an Iris Fritto. Simone makes his version without strutto or pork fat (which is what is used in cannoli too) to cater for vegetarians. This is a slightly dense but soft and fresh donut filled with ricotta and chocolate chips. On the outside are breadcrumbs to add some crunch to the outside of the same donut in the same way that kare pan does. 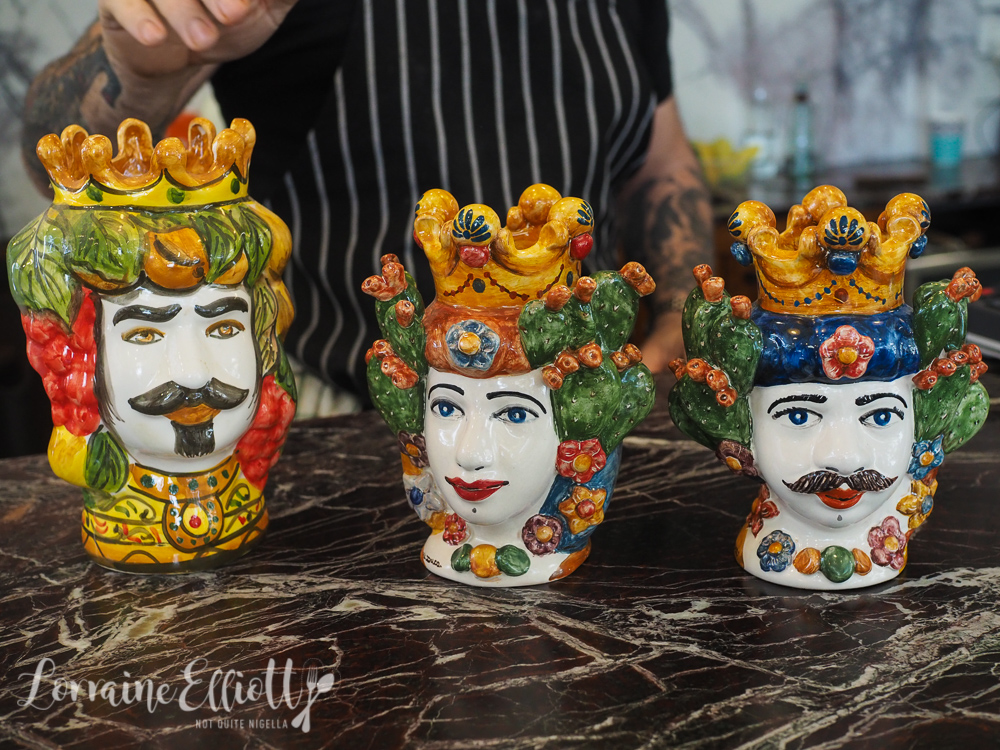 And before we go we take a pic of the Testa di Moro or clay heads that are a signature Sicilian item. Clay and pottery are a signature of Caltagirone, a Baroque town in the centre of Sicily and are a thousand year old tradition. The legend of the Moor's Head goes back to the Arab period in Sicily's history. The story goes that a young Sicilian girl in Palermo began a romance with a Moor man. Little did she know that he was to head back to the East so she cut his head off so that he would never leave her so they would be together forever. Since then they are a symbol of eternal love across Sicily.

So tell me Dear Reader, have you ever been to Sicily? Have you ever tried Sfincione or Panelle?