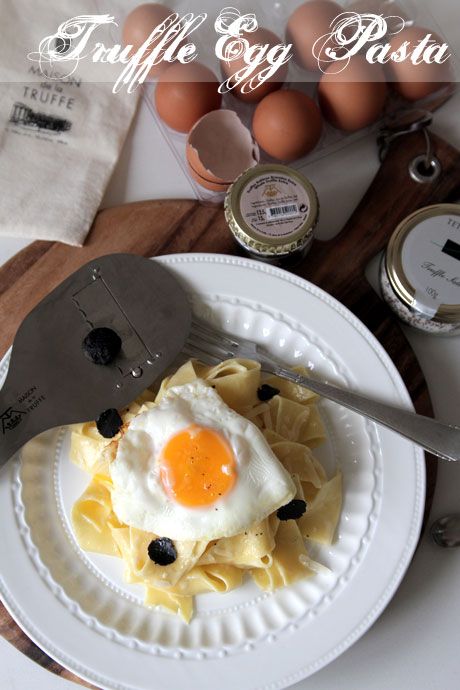 My parents are funny creatures. We seem to have swapped roles over the past few years and we seem to be parenting them somewhat and they've taken the role of child. I think the advent of technology and having to teach them about the internet has played a large part as we've had to teach them hand and eye coordination (i.e using the mouse) and how to use email. Case in point my mother and Mr NQN's mother need to be under constant supervision. 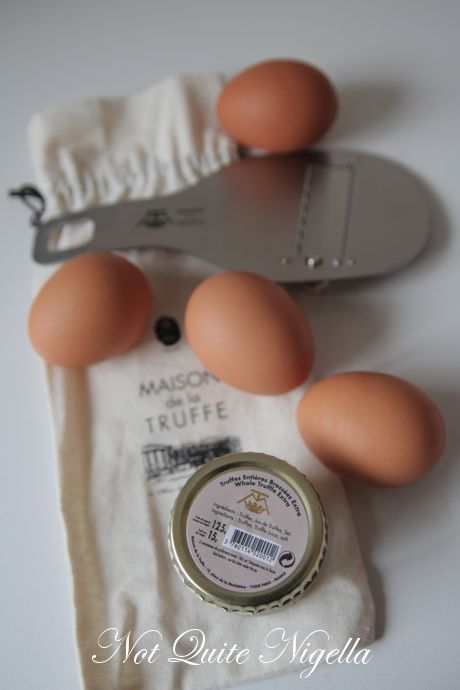 At Christmas dinner Tuulikki, Mr NQN's mum accidentally mistook one of the candle holders as a drinking glass claiming "We thought that it was a very fancy glass". They then proceeded to pour some drink into one to much raucous laughter. Realising their mistake Tuulikki wanted to put it aside on the windowsill where a breeze and an occasionally flapping blind caused Mr NQN's cousin Sam to tell them "Not on the windowsill! You'll spill it!". A few minutes later my mother then knocked a glass of drink over. "If you two don't behave, you'll have to sit on another table" I told them half jokingly. 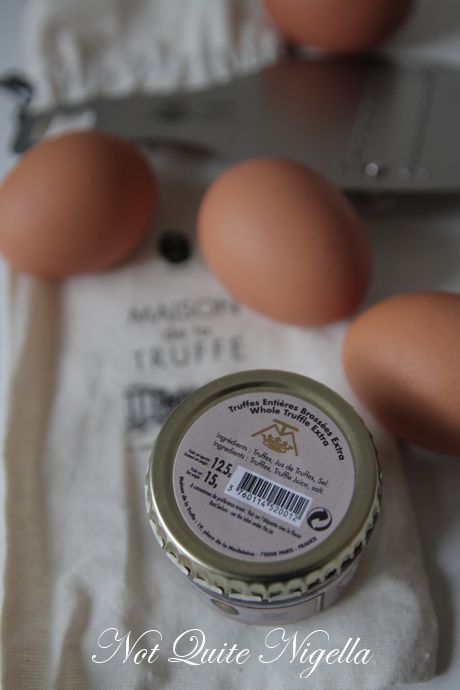 My father is not immune to it too. I offered him some tomato sauce and he shook his head "I don't eat tomatoes". My sister Blythe had to point out to him that tomato sauce was not in fact sauce to eat on top of tomatoes but a sauce made out of tomatoes. How he managed to live here in Australia for almost 40 years and not know this is certainly one for the books. Another thing that completely dumbfounded both of them was when my sister brought me back some truffles from Paris. "Are they really $2,000 a kilo?" my mother asked wide eyed. "Why and how can this be?" she said looking closely at the small bottle containing three tiny truffles. They were fascinated by them and so I decided to prepare truffles the way I love them best: with eggs. 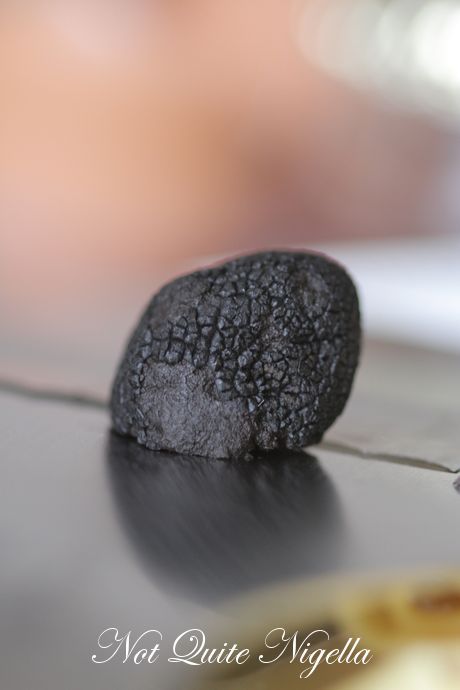 There's one dish at Buon Ricordo that apparently half of the people order. It is the famous truffle egg pasta. It involves fettuccine (but in this case I used an egg papardelle), a cream and butter sauce flavoured with reggiano and a fried egg on top that had originally been stored raw in its shell in an airtight container with the truffle. The eggs through the shell were to absorb the aroma of the truffles. You can also do this with truffle oil or paste if you need to although I am not fond of truffle oil. These little truffles are really not as powerfully scented as fresh truffles and I think that they would benefit from being stored with the eggs for several days. As it was, I only stored them with the truffles for 24 hours. We also added some shaved truffle to the top. If I were to do this again I'd get a real fresh truffle as I have seen them at markets occasionally. 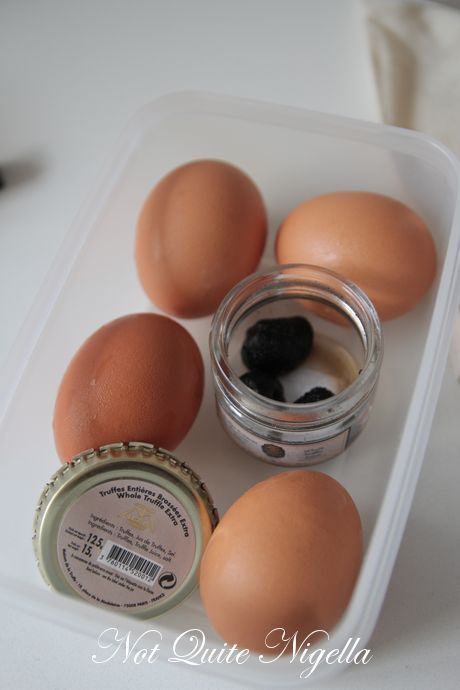 It is very rich-the sauce is pure cream and butter and Armando Percuco advises "A lady to have half" of a serve and it is a dish that is to be eaten once every 6 months. He does add that chef Tetsuya manages to eat this dish and then have a T bone afterwards.  I don't know if my parents are any closer to understanding why a truffle is so prized but they did enjoy the dish-and no candle holders were harmed in the process.

So tell me Dear Reader, have you ever tried truffles and if you have, what is your favourite dish to eat them in? 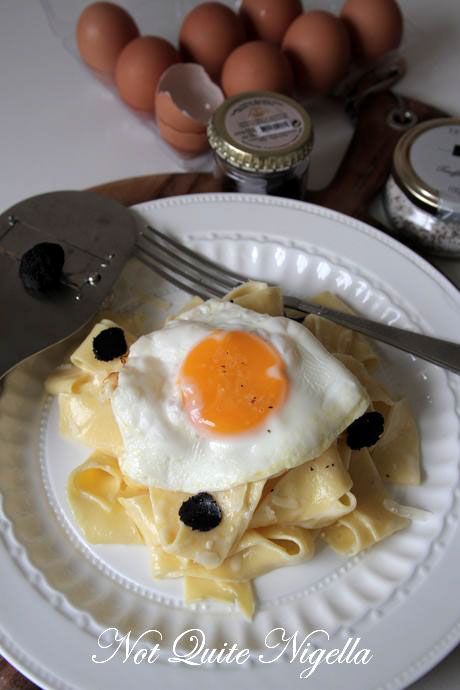 Serves 6 as an entree

Adapted from a recipe by Armando Percuoco on Lifestyle Food

Step 1 - *Make truffle eggs: At least 24 hours ahead of time, place eggs in a container with truffle to infused the truffle aroma. 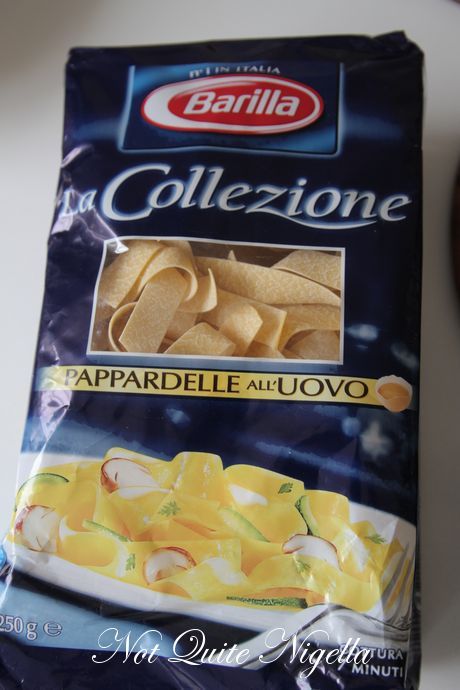 Step 2 - Boil fettuccine for about six minutes if dry, or four minutes if fresh. Drain.

Step 2 - Add butter and cream in a frying pan and simmer for three minutes over medium heat to reduce the mixture. If using ordinary eggs and truffle oil, add truffle oil now. 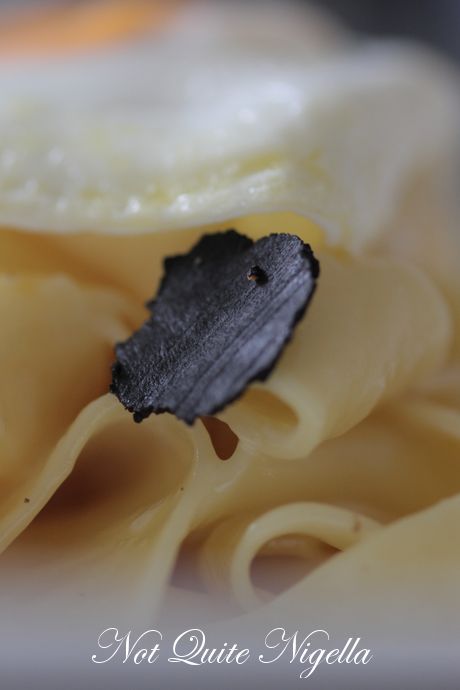 Step 4 - In the meantime smear frying pan with butter and fry egg until whites are firm, but yolks are still runny. Place egg on pasta. Add more parmesan, salt and pepper and toss egg into pasta. Add little slivers of shaved truffle if you are feeling indulgent. 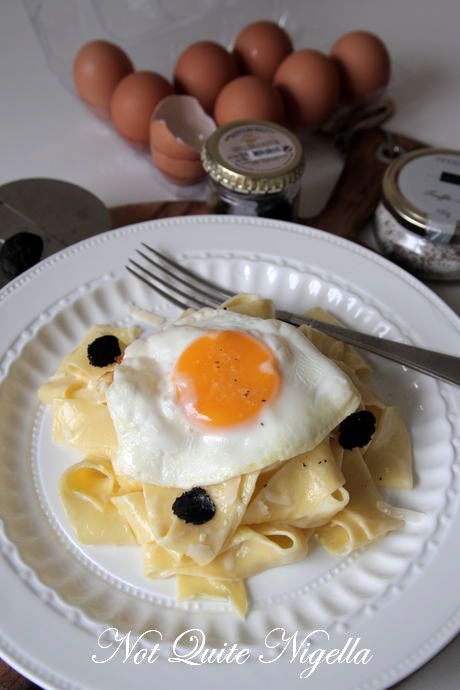