Social Experiment: Who goes to Hooter's on Valentine's Day? 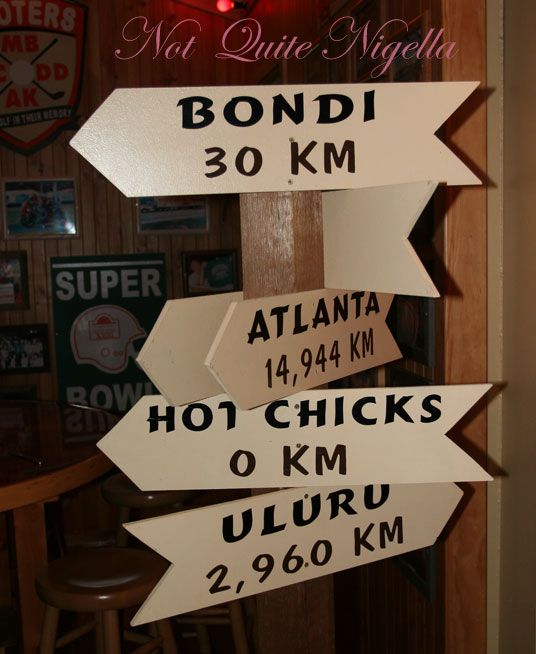 After a recent visit to Carne station in Parramatta, we were driving back home and passed Hooters, to which we immediately screeched with laughter. Once our laughter subsided we realised that we just had to come out for a visit. More for morbid curiosity than anything else. Hooters is an American phenomenon that hasn't quite made an impact here with just the two locations in Sydney and one in Queensland. We wanted to know whether the "image" of Hooters was anything like reality. Would it be like a down, down home version of the Playboy mansion much like the show Blokesworld? I haven't known a single person that has visited, due to its location being rather far away and the reputation being that of a busty, bawdy, blokefest. 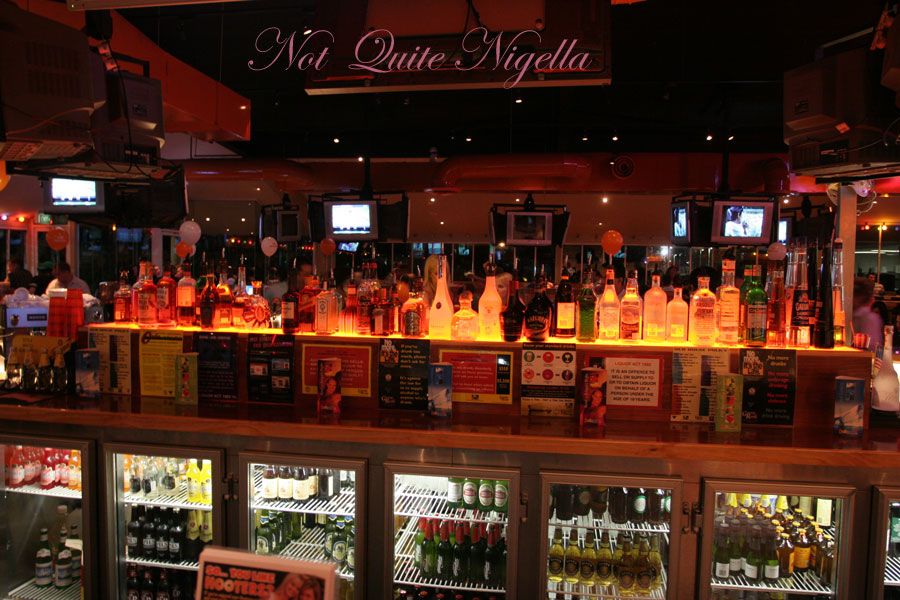 We needed to convince my food adventure friends Queen Viv and Miss America that this was indeed, something we should do in the name of research. Miss America was more than amenable, she even threatened to bring along her own inflatable swimming pool and lime jelly. Getting the regal Queen Viv to agree was another thing. We asked if she was busy and that we were thinking of having another food adventure out to a place that has a certain charm. Once we had ascertained that she was free, we told her that it was called "Oouteurs" suggesting that it was a chic little French bistro. I gave the game away as I couldn't keep a straight face and Queen Viv was a good sport and thought that there was some merit to our morbid curiosity. We thought that it would be an interesting thing to see who would go there on Valentines Day and my husband, relieved of Valentines Day cooking duties, agreed. I didn't mind giving up Valentines Day. After all, our wedding anniversary is only a few weeks later and we have planned something big for it. 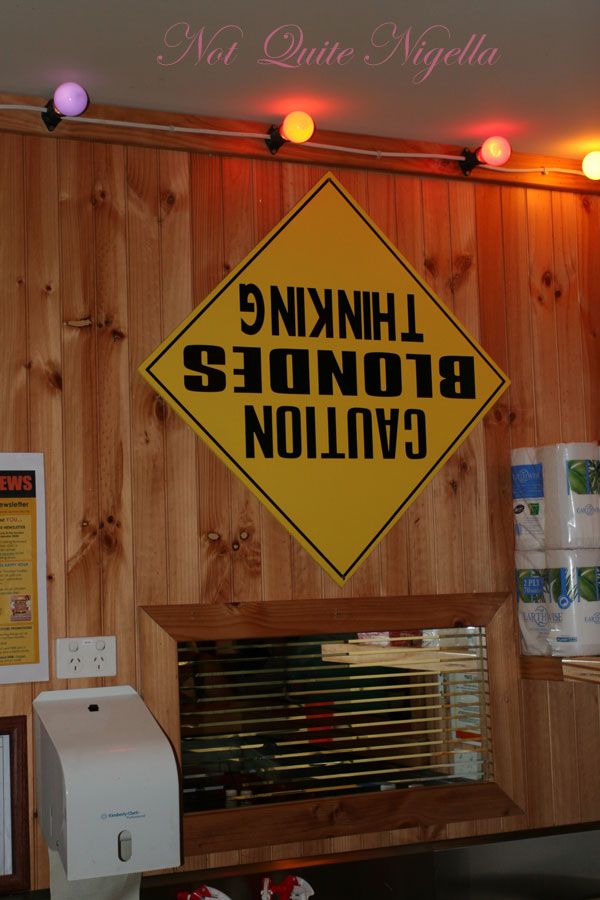 I wanted to dress up as a prim and proper Victorian lady with high Victorian collar and lace parasol and ask in a haughty voice "Where are the OWLS?" but my husband, Miss America and Queen Viv said that I would be the only one :( 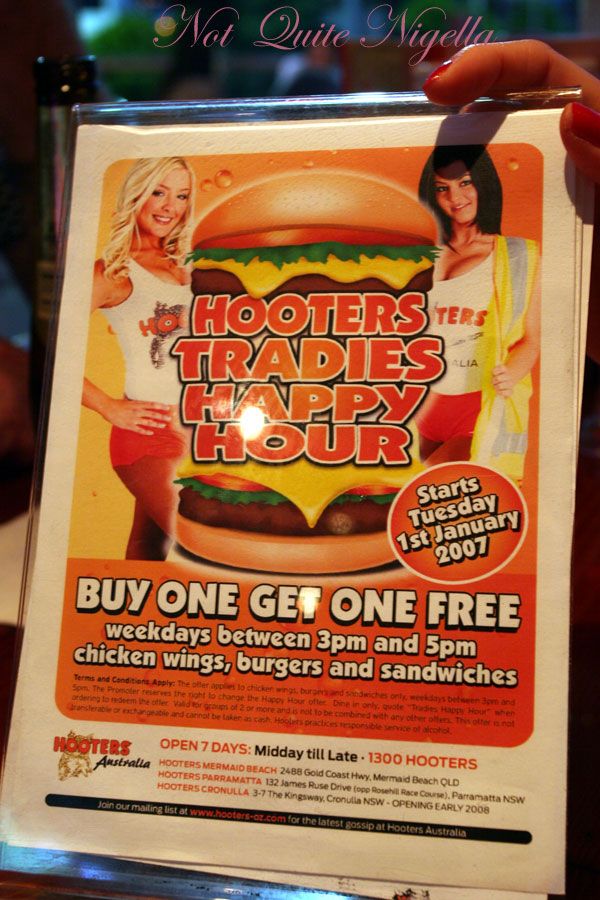 Ringing ahead to book I was told that it was indeed "singles night" where they match up a girl and a guy to go off and have dinner together. Half of the restaurant was booked up for this event with places running out but the other half was walk in traffic. 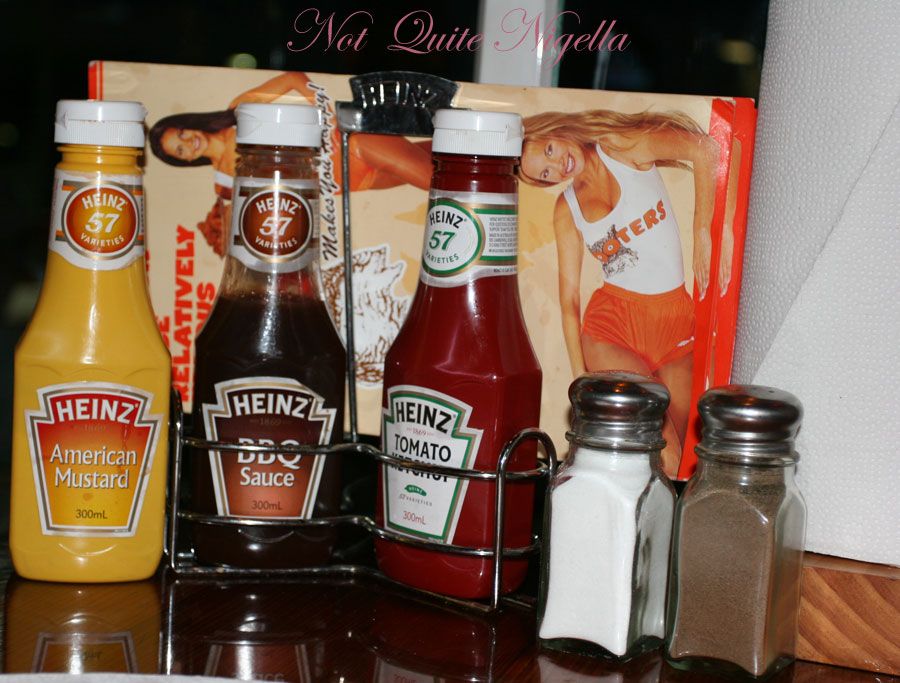 At 7.30pm on Valentines Day, we arrived after fighting some insanely awful traffic. Miss America and Queen Viv have just arrived too and are looking a little distressed. "Its very LOUD music in there!" Queen Viv exclaims and we walk in to an aural assault. They have our booking and we're led to a high table with menus on the side, a caddy of squeezy bottles of tomato sauce, BBQ sauce and American mustard and something that makes us laugh, a paper towel dispenser, with the last towel decorously folded over modestly. 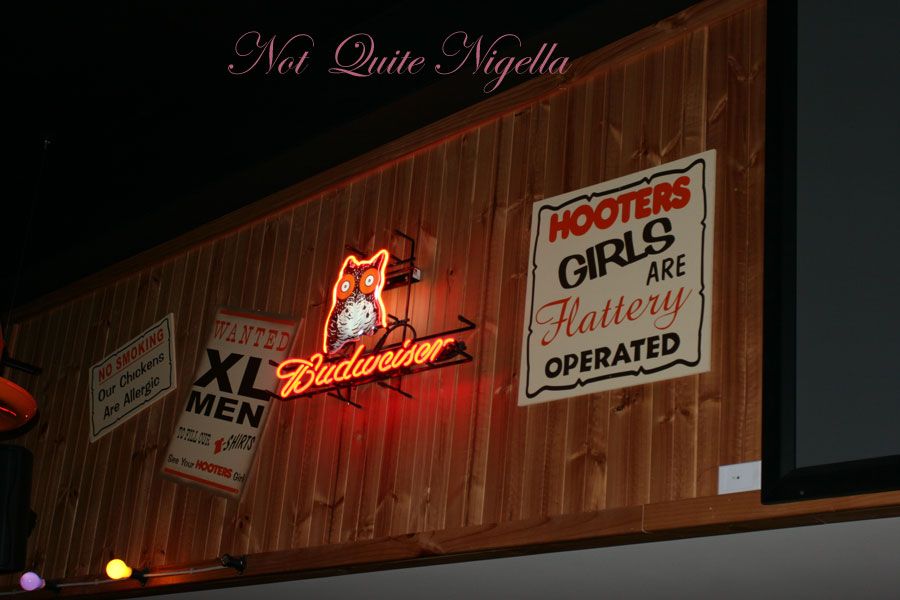 The room itself is decorated in a lot of warm, solid woods and TV screens featuring all manner of sports, I guess appealing to men and music loud enough to have to do away with conversation which, presumably also appeals to men. Signs are everywhere cracking the usual blonde and boob jokes and the waitresses are outfitted in tiny nylon orange shorts, white Hooters singlets, thick white socks and sneakers, not to mention the industrial strength shiny pantyhose that could probably withstand a jet blast and survive intact. The back of the singlet says "Delightfully tacky. Yet unrefined" which sums up the experience really. The outfits are like 1985 came and stayed and any minute we expect Jamie Lee Curtis from Perfect to walk in wearing her green aerobics outfit. 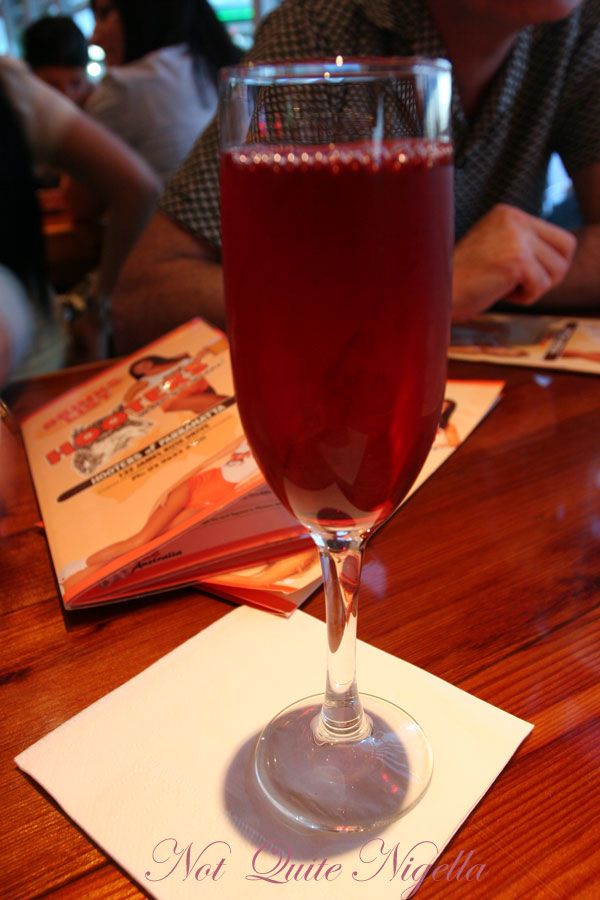 Our waitress is Emma, we know this because, in American style she tells us her name and that she'll be our waitress for the night and to further emphasise her point or perhaps stake the table, she writes down her name on a napkin. She's friendly, smiley and could give some waiters a lesson in service. We girls are given a free drink for the night, a cocktail of cranberry juice and Malibu-its not bad but coconut and cranberry juice aren't natural partners but who am I to complain when I'm getting it free just for being a girl? Beers are a little on the expensive side, at $5 for a beer on tap and $6.50 for a Crown Lager. 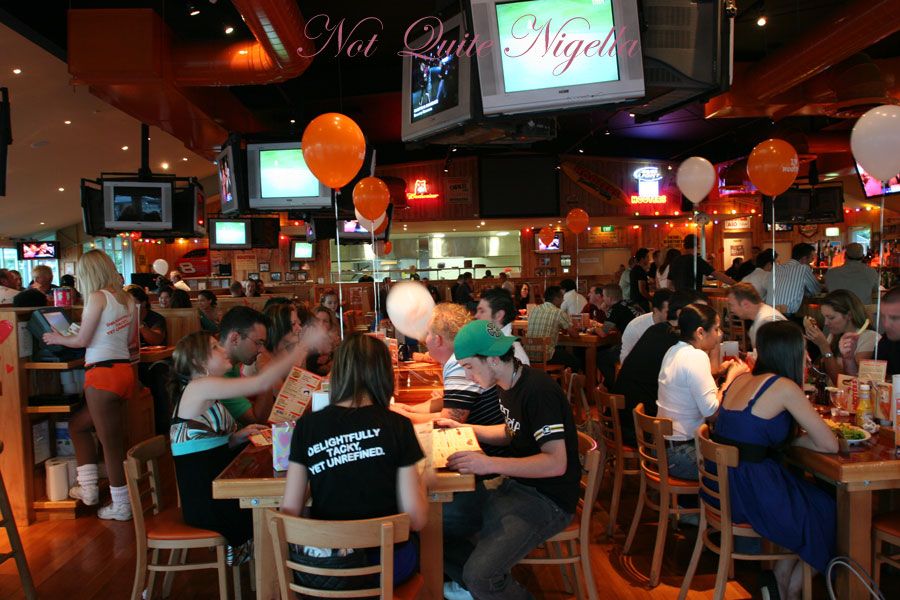 As promised singles night is in full swing with large tables of people sitting around chatting, denoted by the orange and white balloons. Looking around the room we see plenty of couples having a Valentines Day dinner-on the menu there is the Hooters Gourmet Dinner that has perhaps lured them. For $109.95 you get 20 buffalo wings served along with a bottle of Moet Chandon champagne. As the menu says "Its as much as class as you need!". Unfortunately we don't see a lot of bottles of Moet being drunk or champagne corks being popped. There are also families and plenty of young singles that aren't actually taking part in the singles event. In fact there are a lot more men than women so I am not sure where this reported "man shortage" comes from. Perhaps Hooter's is an exclusionary zone. 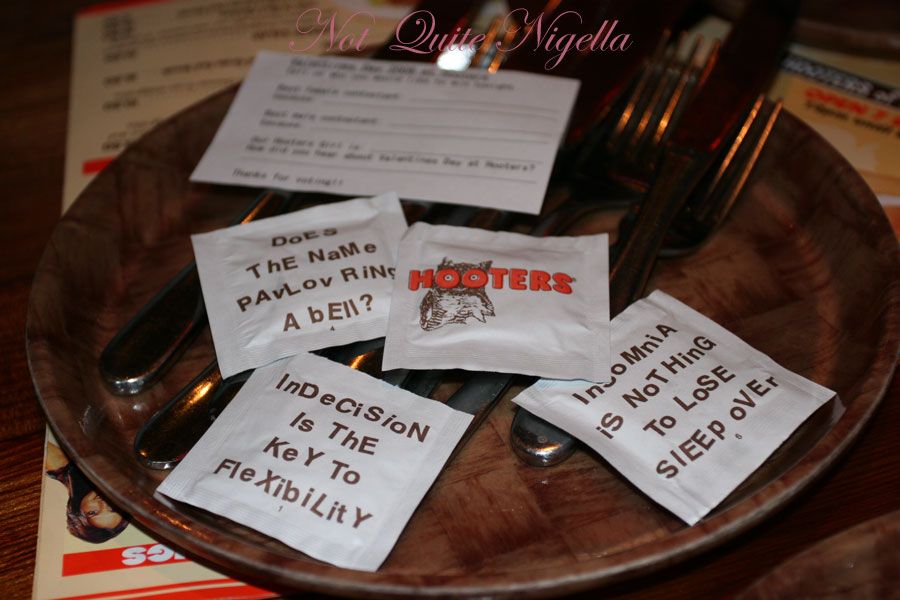 But for me, as always, the food is what beckons me. I had a look at the menu online earlier in the day and for once, its actually current. We order food to share and extra plates. When they bring out the moist towelettes, we realise that we're firmly in deep fried territory. 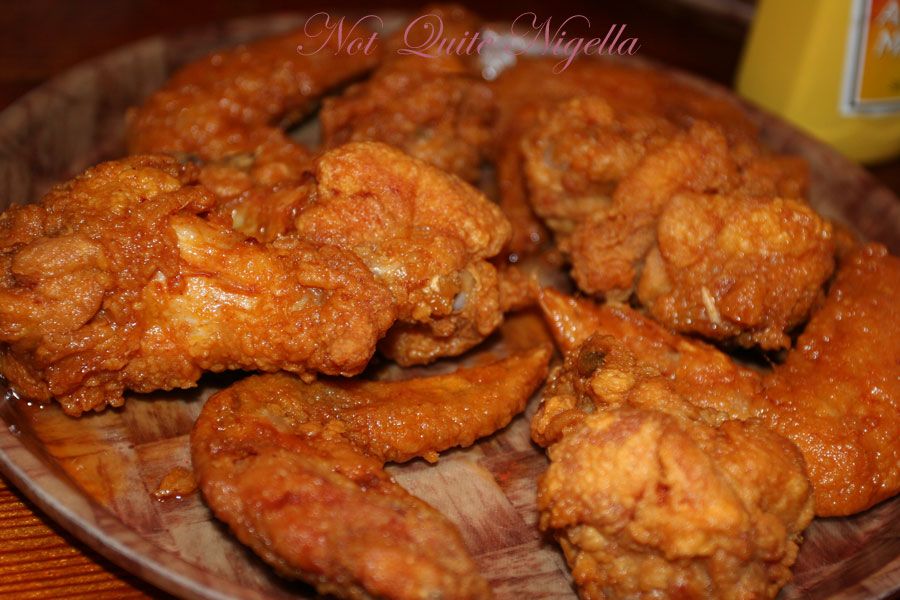 The chicken wings are the first to arrive (10 wings for $10.50). Juicy, crispy and battered they're very tender and although we've ordered medium, there's not a trace of chili or spice to be had. Perhaps we needed to go to the "real hot 3mile island" or the "screamin' hot 911" heat levels. From what we've been told, from a friend of a friend, this is pretty close to American style wings. The leg portions are much juicier than the wing portions and I happily munch on these. 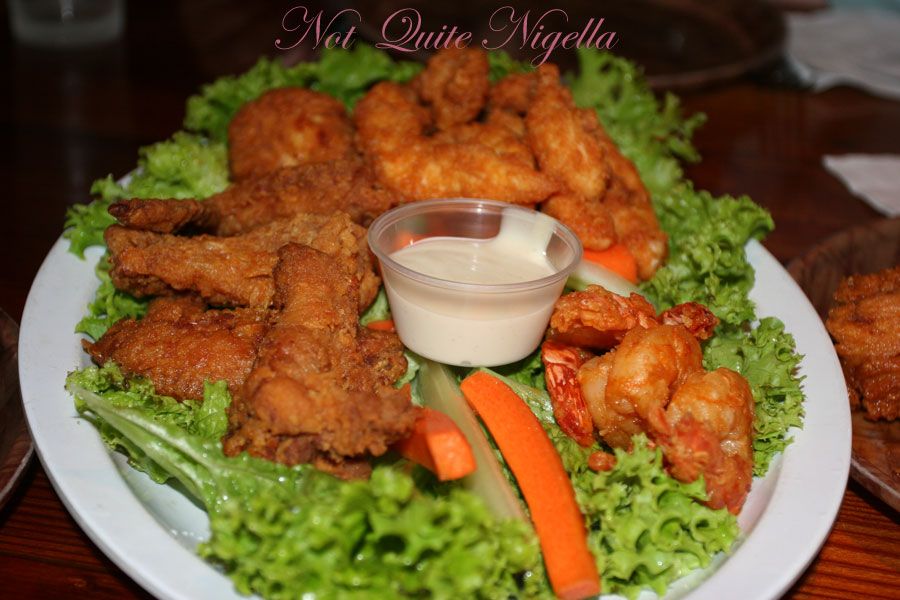 The Buffalo platter is next ($19.50), a tray of deep fried calorific goodness on a green lettuce and salad base with carrot and celery sticks just so you feel like you are getting your vegetables. We had a choice of ranch or blue cheese dressing and we chose the ranch which is creamy and tangy. On the Buffalo platter are chicken strips, buffalo shrimp and more chicken wings. The chicken strips are very tender and juicy and Queen Viv's favourite but the Buffalo shrimp are an awful disappointment. These shrimp have seen better swims and taste completely dry and flavourless. 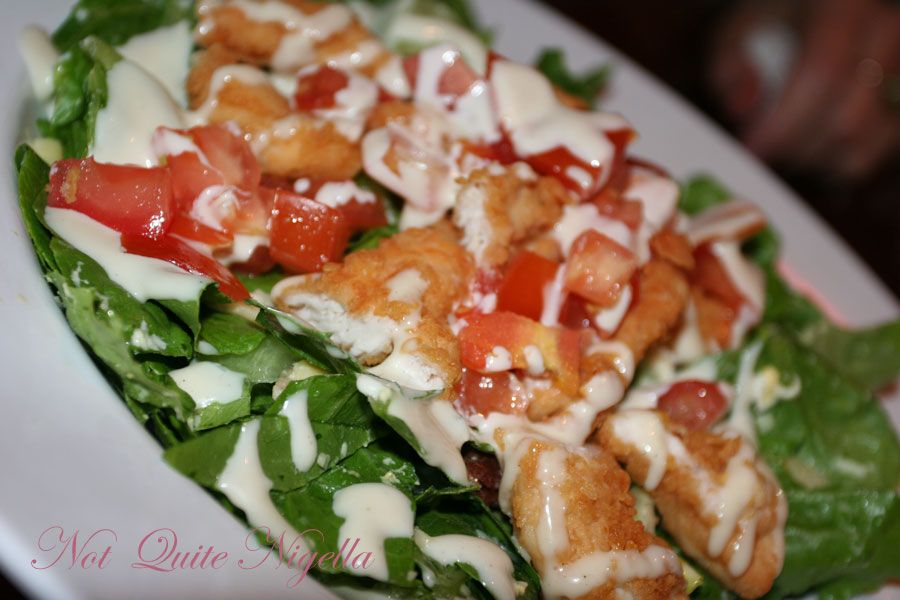 The Delta Cobb salad ($15.50) is the next to arrive and its comparatively small but good, with cos lettuce, bacon, egg, cheese, tomato and topped with what else but fried chicken strips! Its indeed very tasty, if not exactly healthy but its crisp and textural enough to keep us happy and feel like we're not eating one giant deep fried buffet. 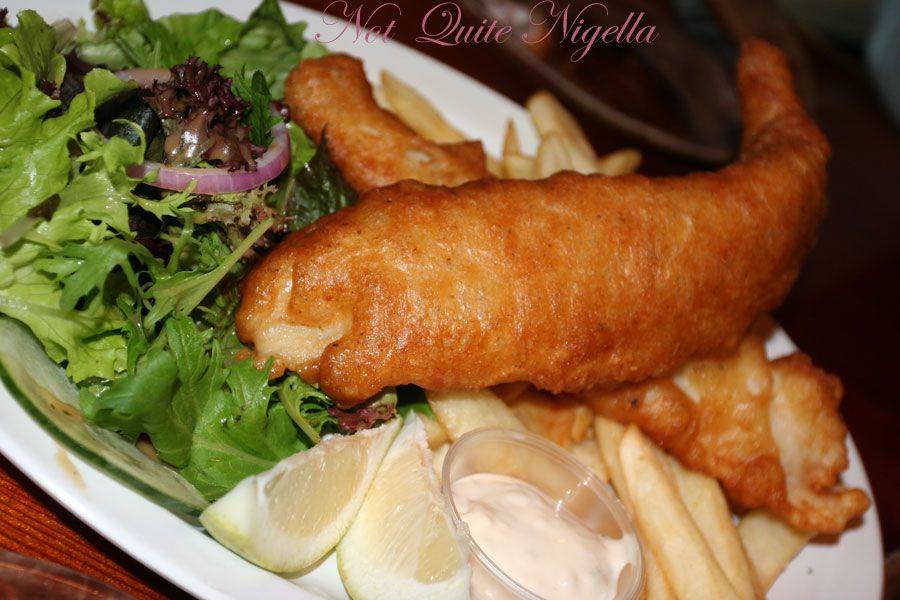 Our fish and chips ($14.90) consists of two enormous pieces of fish (one resembling a swimming fish), fat traditional cut chips and side salad. The fish is freshly cooked and juicy although the fish itself is very flakey and appears almost minced in parts so we presume it to be shark like most fish and chips. We're not under any delusions, its not an upmarket restaurant and unlikely to be another type of fish. 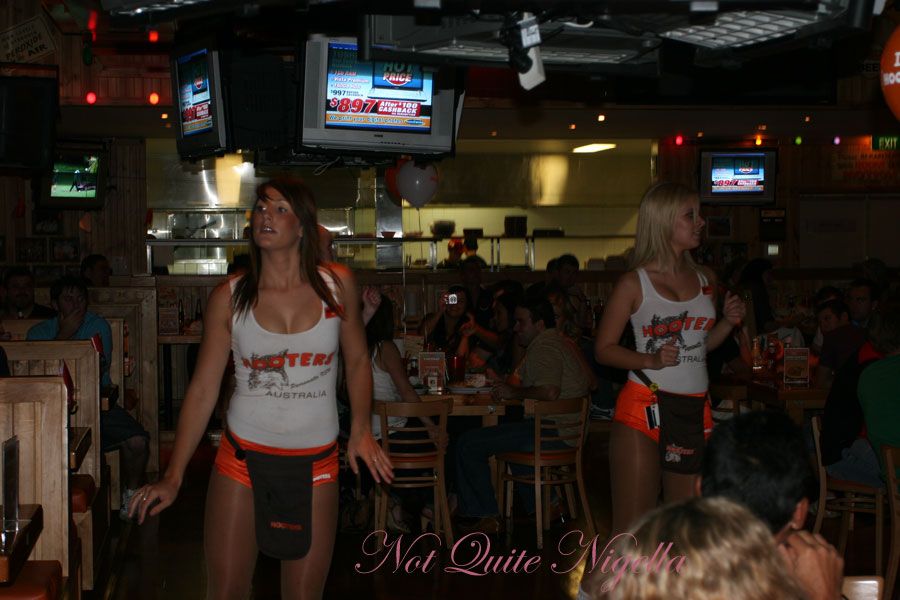 We're finishing up our meals and unfurling our miniature sized moist towelettes when there's some action happening mid floor. Its 9 o clock and time for the ... Hooters girls to dance the Nutbush? There are 5 in total dancing together and after the Nutbush they get up on chairs and the booths and dance some more. Its a little surreal, compounded by the fact that they look a bit embarrassed and bored during. As Queen Viv points out, its very reminiscent of the jumping stripper dance from My Name is Earl. 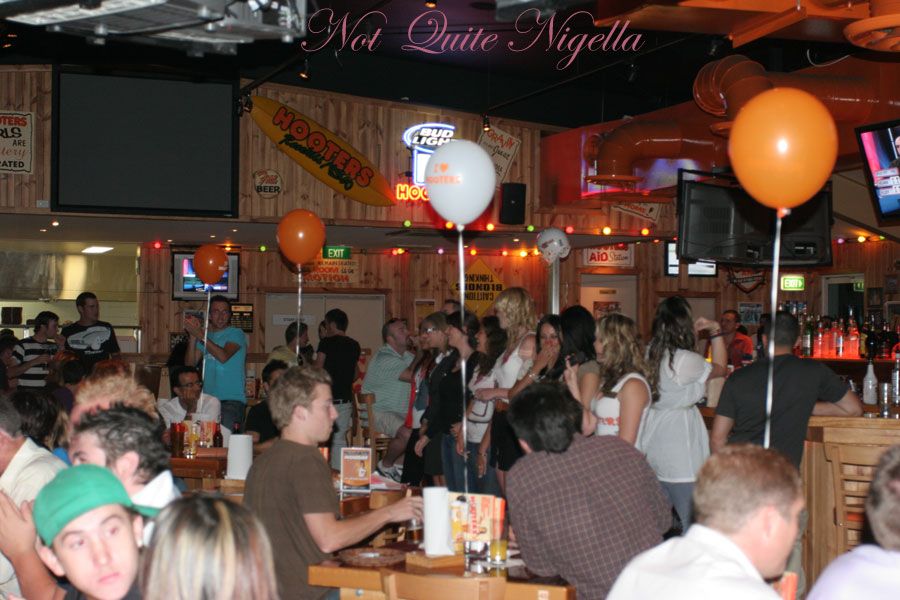 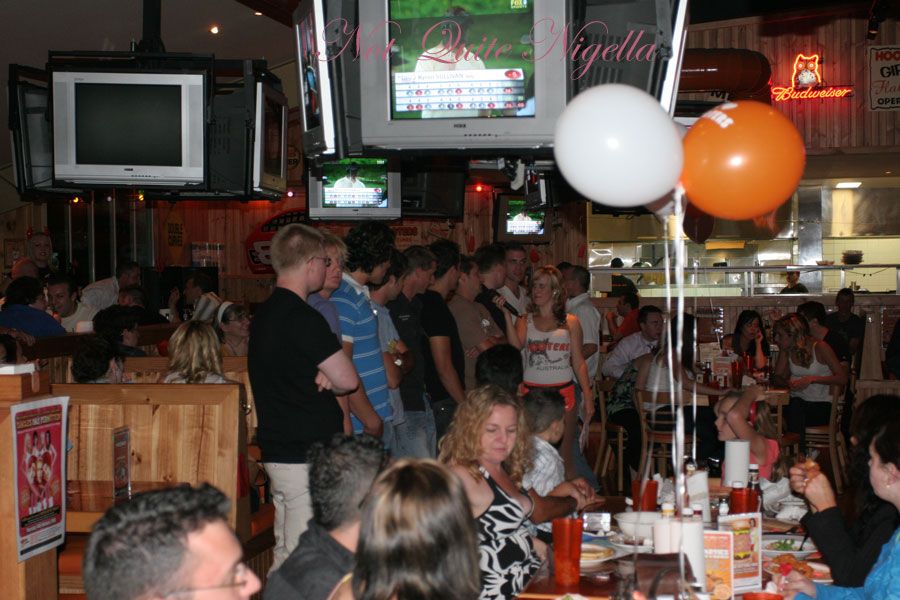 But let's not forget Singles night. Its time for the single girls to get up and tell us what they're looking for in a man and then its the single men's turn to describe what they consider to be their "perfect date night". Although its hard to hear most answers, we do hear one gem from a guy that answers that his perfect date would be: "KFC, DVD, Hooters and then rooters". Well ladies, you know where to find him. Form one orderly queue please... 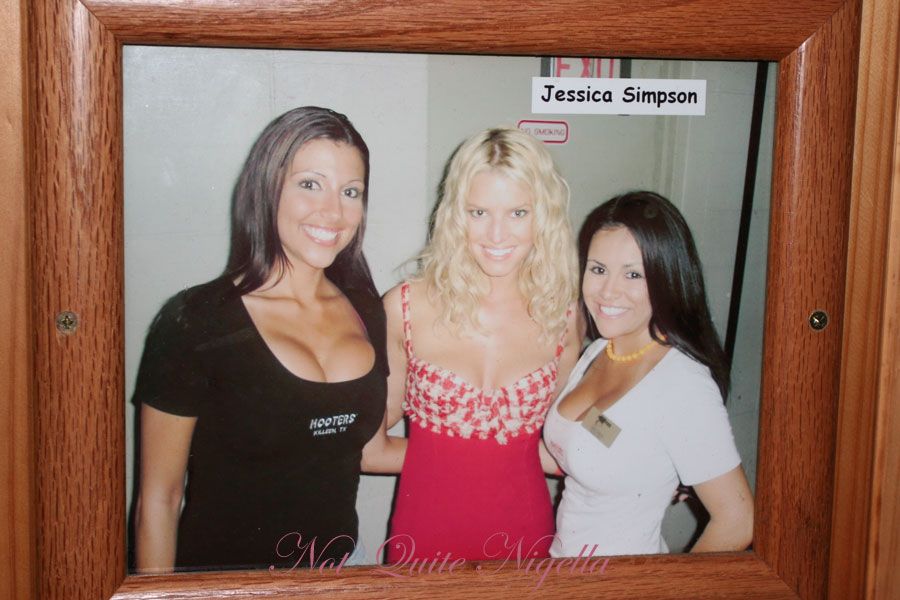 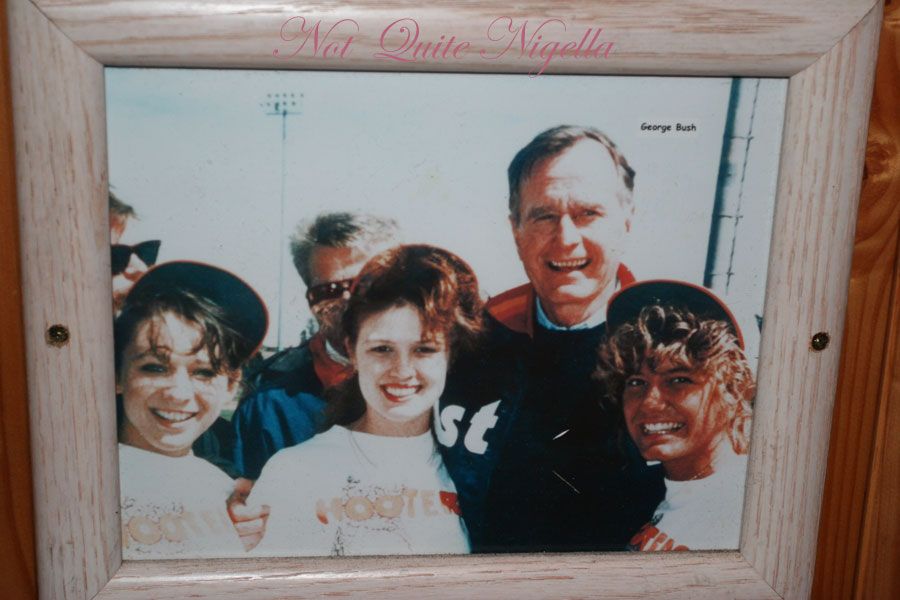 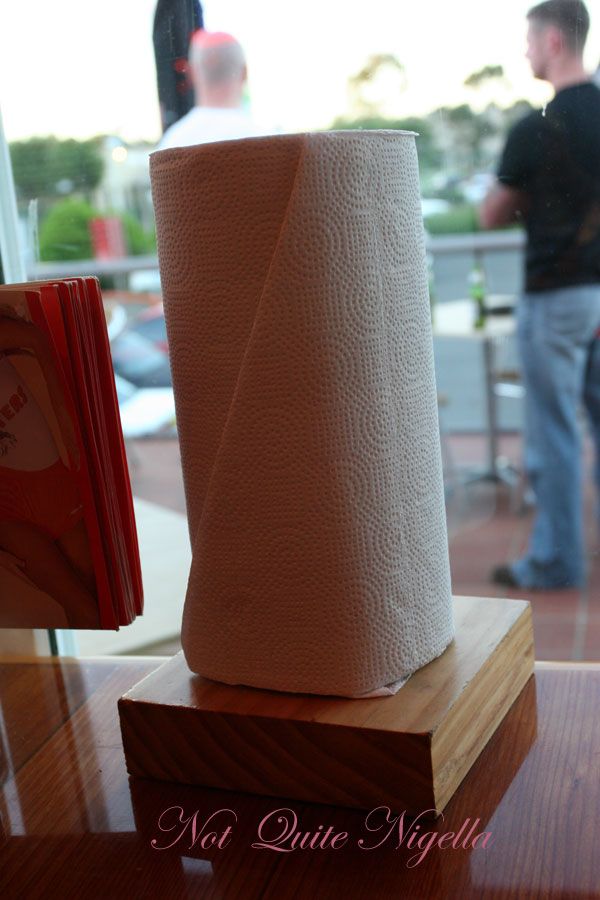