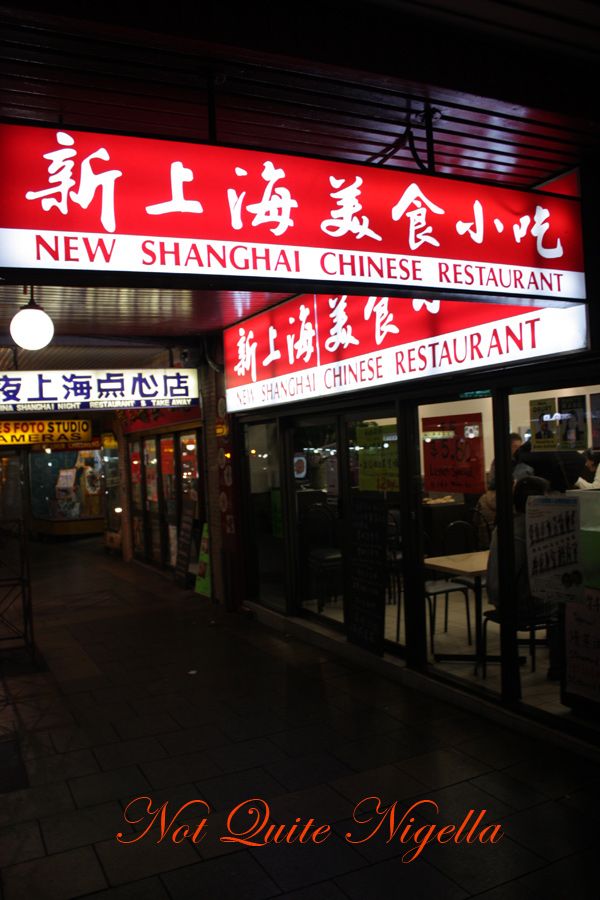 My husband is in bad birthday rehab. He's had too many disappointing birthdays to count, from when he was young and given a bag of rocks from the garden to when he was older and received a box of toilet cleaning supplies. He's understandably scarred by the concept. I on the other hand adore birthdays and love to celebrate them for at least a weekend. I also love other people's birthdays from the ritual of selecting a present for them, wrapping the gift and writing the card and seeing their face when they open it. So I take my mission seriously to make him love birthdays again and what the birthday boy wants he gets. Sort of. His favourite restaurant is Shanghai Night in Ashfield, the place where for a mere $6.60 he can get a massive 18 piece serving of dumplings. I was only too happy to go here but in true food blogger fashion, I felt that I should try somewhere new-ish. He agreed to the compromise I suggested, trying the Shanghai dumpling place next door to Shanghai Night. There, at least he'd be guaranteed of his beloved 18 dumplings. 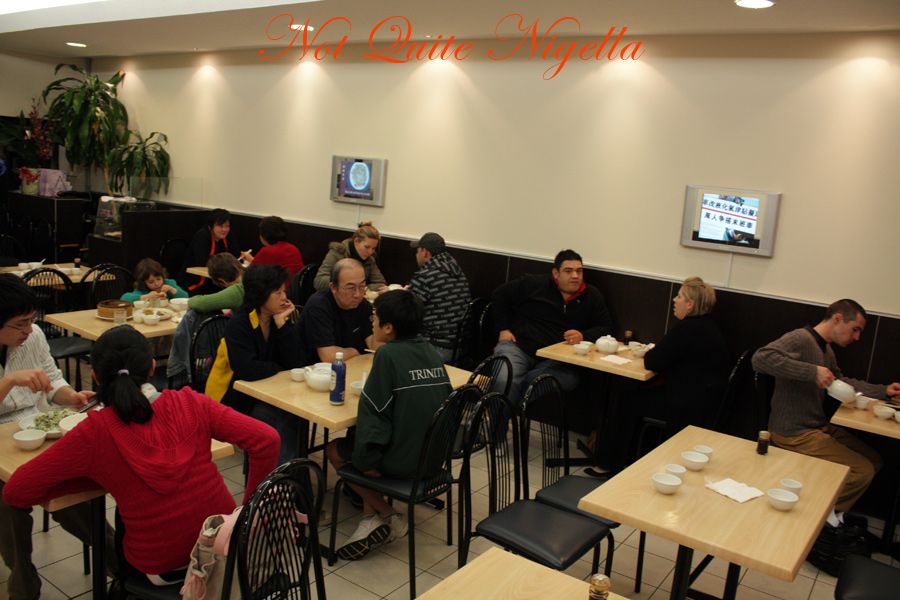 New Shanghai Chinese restaurant is indeed right next to Shanghai Night. Inside it looks brighter and newer with small plasma screens showing a rotation of the items on offer. It's slightly wider than Shanghai Night next door by about 2 metres. The configuration is different, with the cashier towards the back and the dumpling makers behind a glass screen on show for customers and some booths to the right (which currently have some dumplings abandoned mid preparation). 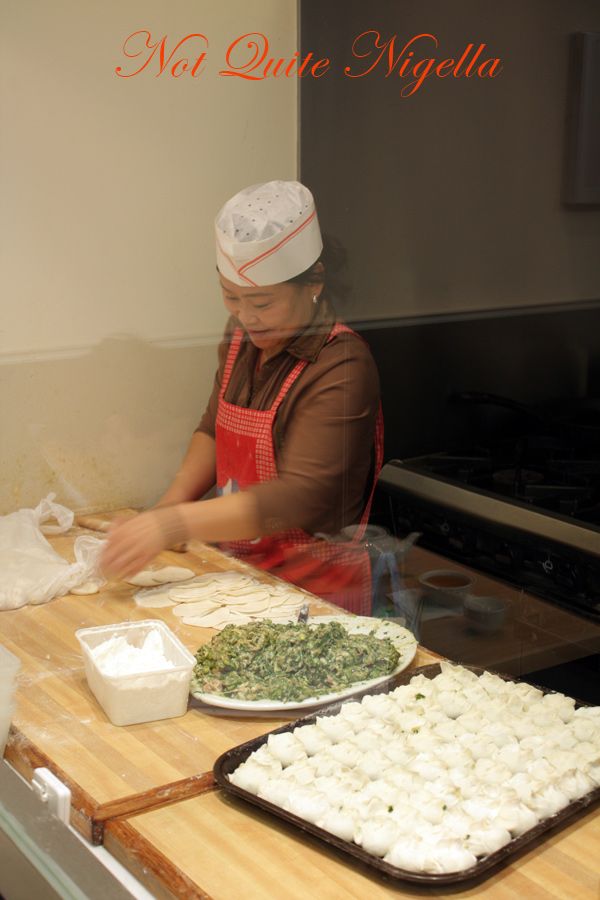 Service is friendlier than that at Shanghai Night and while we see a lot of familiar items, namely the dumplings, prices are higher by a dollar or two. There are also some unusual dishes and of course, being the visual creatures that we are, we are enticed by the items in the pictures.

We order and the dishes trickle out slowly, one by one. None of this fast and furious pace that we get at Shanghai night (which we actually prefer). 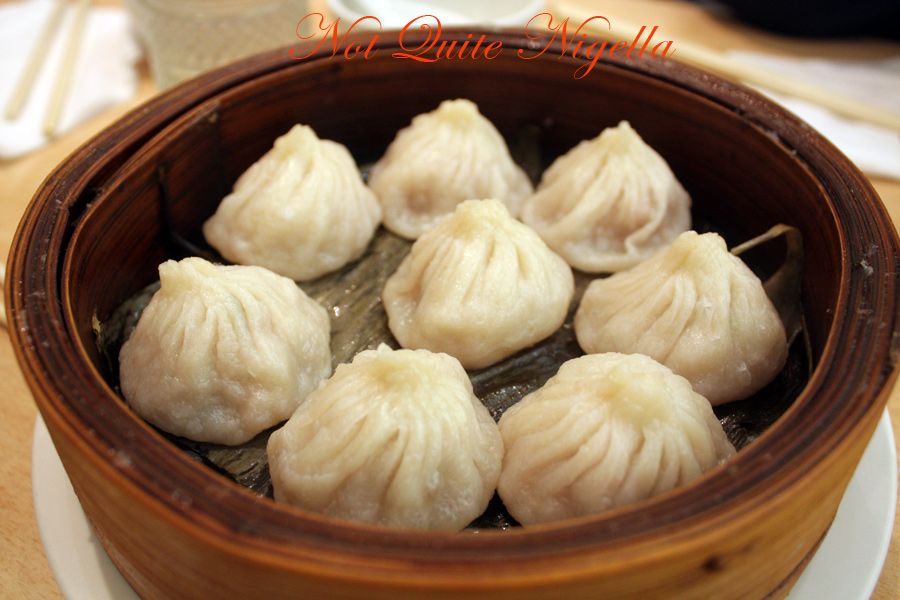 The first item we receive is the Xiao Long Bao, the famous mini pork buns with hot soupy interior which explodes with the first bite. We notice that there aren't too many punctures (good) but the hot soup and filling is missing the ginger zing which we adore in the Shanghai Night dumplings. 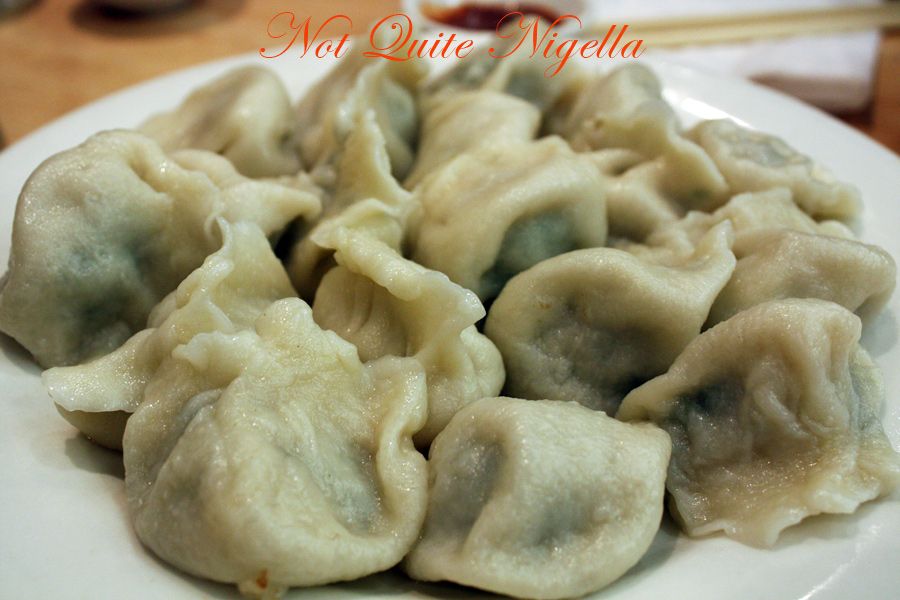 Steamed Pork with coriander dumplings $7.80 for 18

After some waiting, the large plate of steamed dumplings arrive. They're less delicate than the Xiao Long Bao and in this case, the coriander flavour is stronger and the skin a touch thinner and more delicate than Shanghai night's sturdy version. We prefer these. 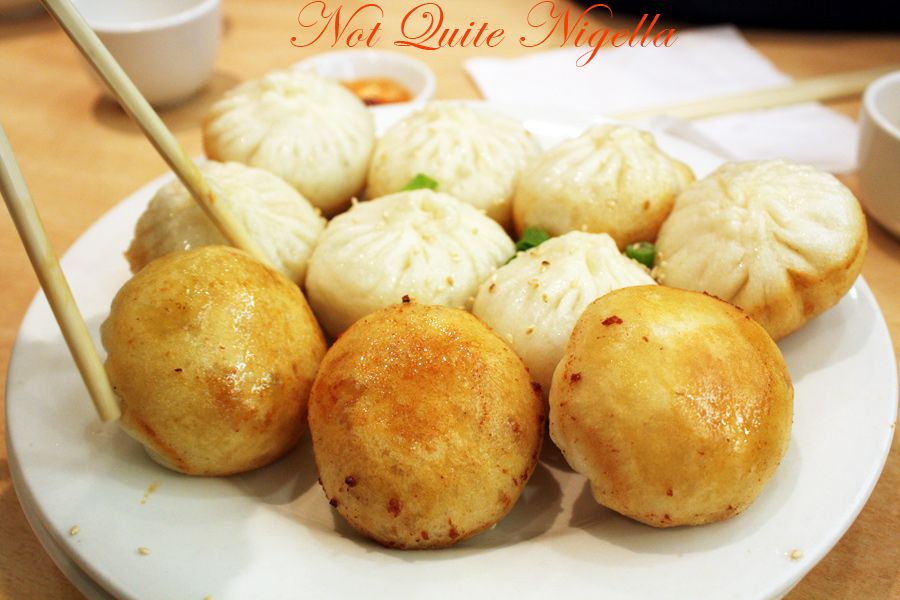 These are among my favourite at Shanghai Night but when they set these down, I know just from the look of them that I won't like them as much. How do I know? The bottoms are barely cooked. 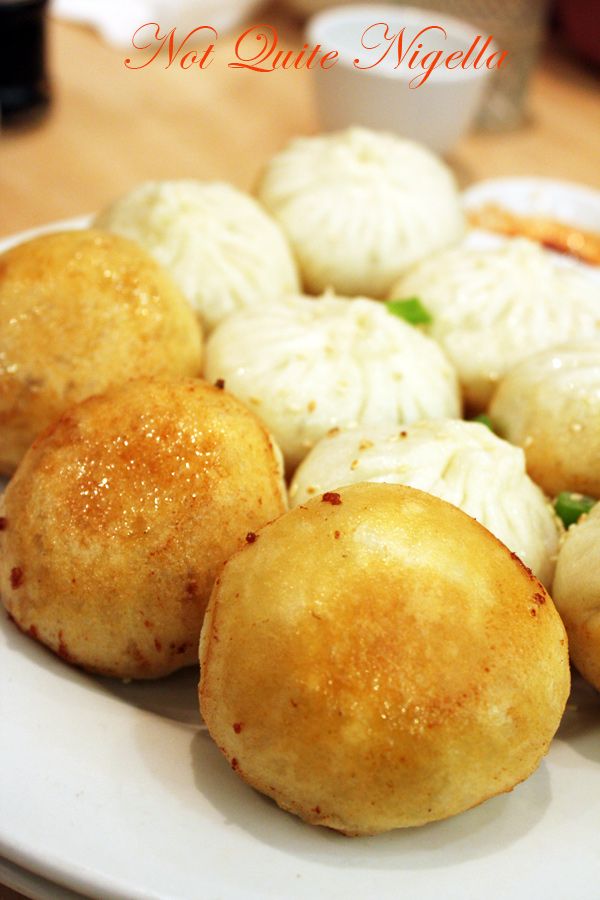 They look like they have only briefly kissed the bottom of the pan. I want ones that have had a good old smooch or a bronzed bottomed French kiss. I want the bottoms to be absolutely crispy. Inside, there's actually soup in some of the dumplings which my husband likes but for me, the absent crunch leaves me pining for it. 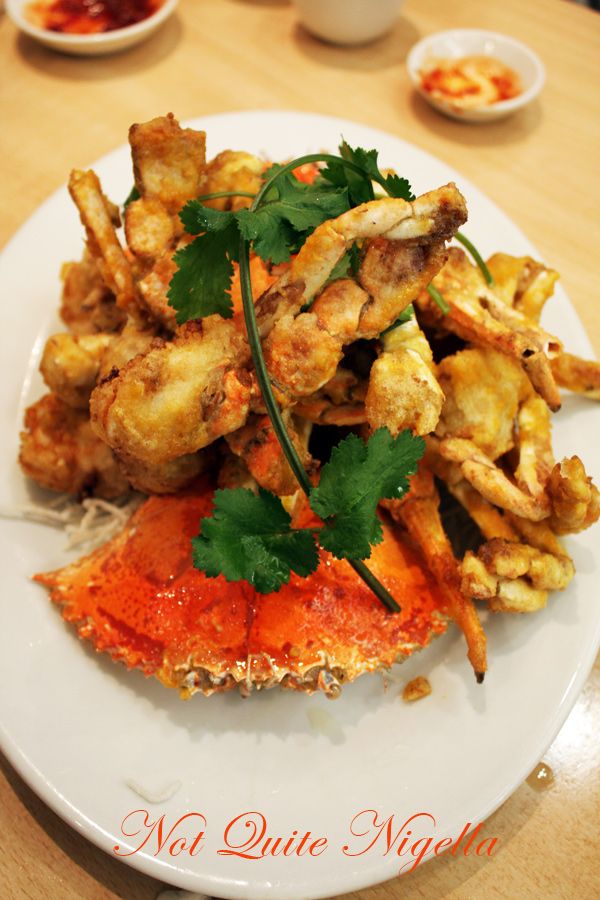 Not being quite sure of what yolk of salt egg tastes like, we ordered this as it had a photo of it on the menu. Two blue swimmer crabs sit, looking rather sad and each piece is coated in a fine crispy coating much like a salt and pepper coating without the pepper. 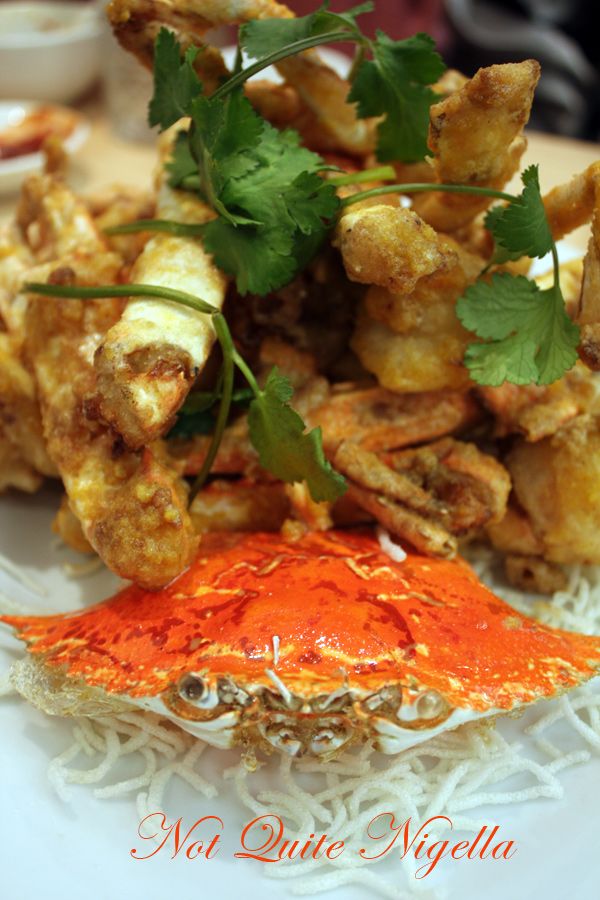 It's absolutely delicious of course and I find myself eating leg after leg, crunching satisfyingly into the meat on the end of the legs like a crunchy savoury lollipop. As much as I find crabs adorable, I couldn't pull myself away from these if I tried. I did try I think, once, to no avail. 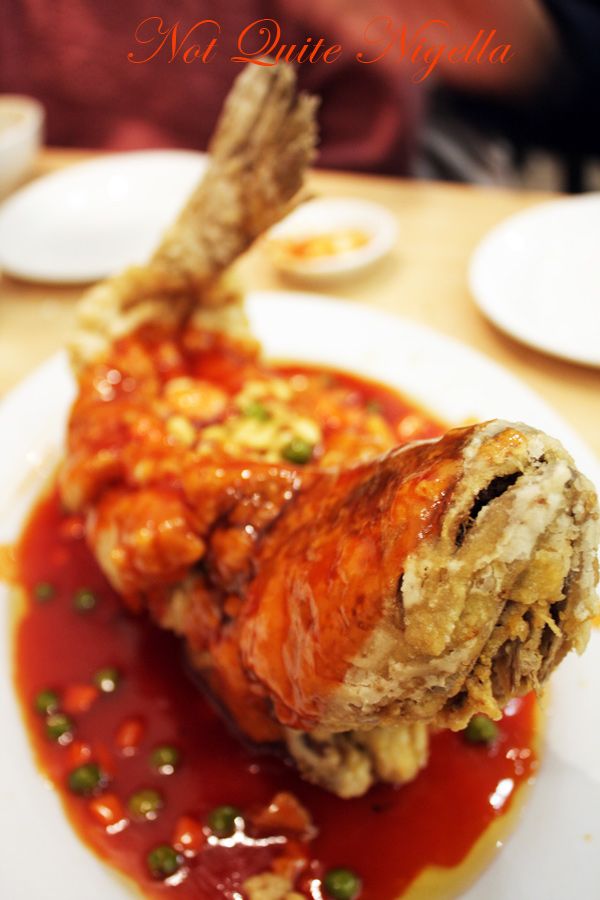 Our last course arrives and whilst I am full from the crab, the sight of the fish is certainly impressive causing other diners to stare and some to call the waitress over, point to it and order. The fish, looking like it has been frozen mid flip and immortalised in batter is large with a river of red sauce around it. 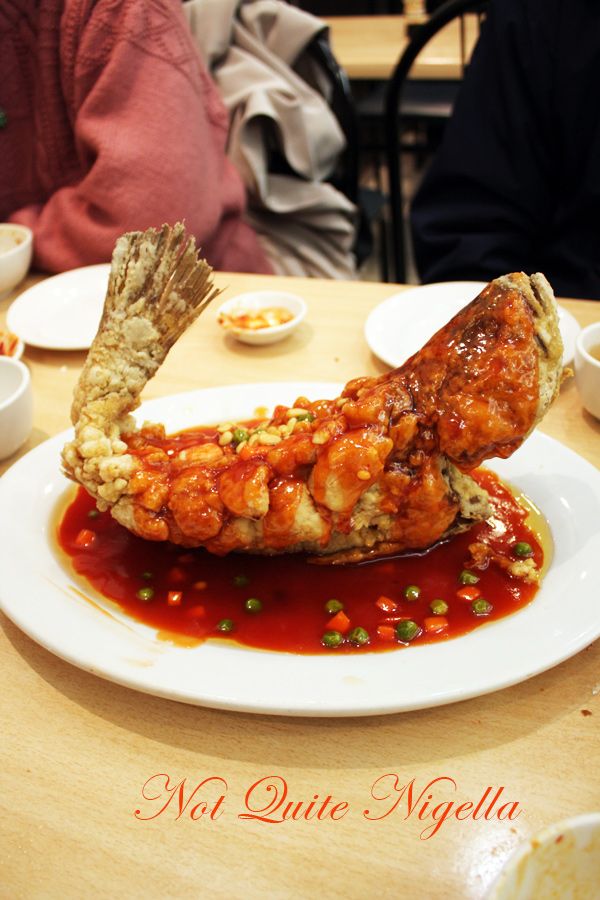 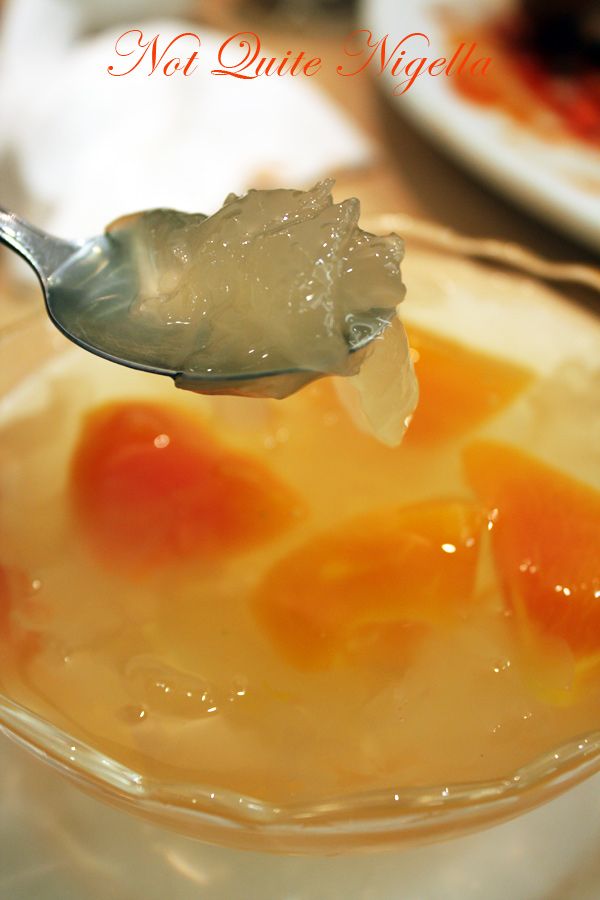 And because it's my husband's birthday, he orders his favourite dessert, the slippery White Fungus and Papaya dessert, with sweet syrup. The White fungus is a slippery treat with a faint almost-crunchiness to it.

We're stuffed, done in by the crab and fish. We're surprised to hear a "Thankyou!" coming from the owner when we leave (being used to Shanghai Night). When we walk past next door we see both places have a chalkboard outside advertising their Mini pork buns. 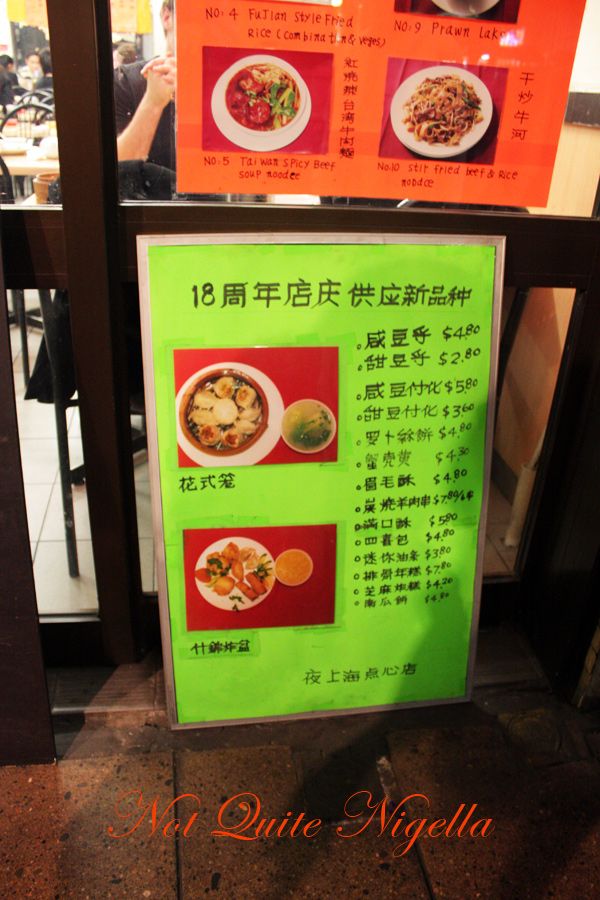 Shanghai Night also has a sign for its 18th anniversary there with some specials, all in Chinese. We'll go there for the dumplings but we'll go to New Shanghai Chinese for the fish and crab. 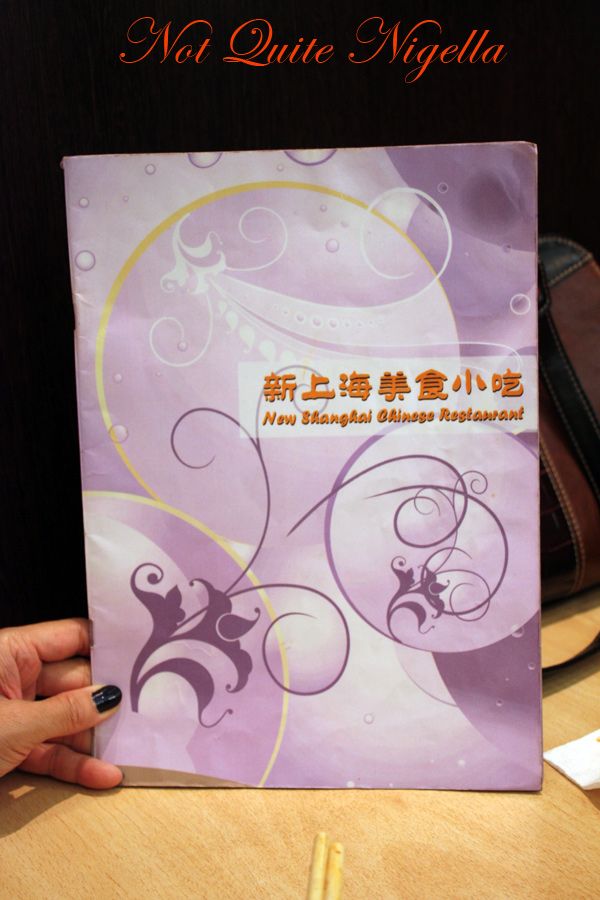