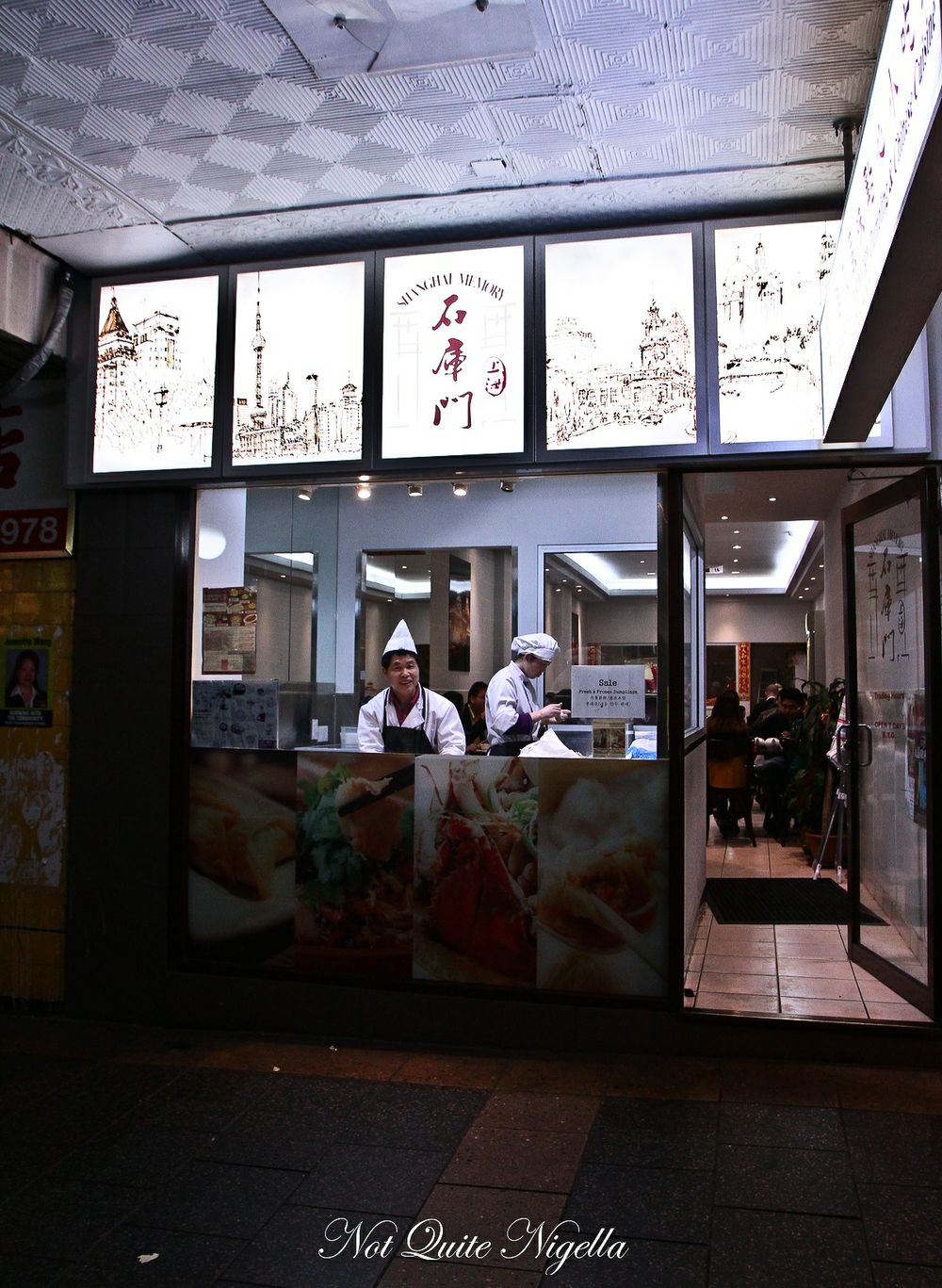 "Oh yes I remember this place" Mr NQN said as we walked into Shanghai Memory, the latest installment of Shanghai eateries on Ashfield's Liverpool Street. Impromptu, one afternoon we had visited it without the camera but with Mr NQN's cavernous, growling tummy. Open for a couple of months, it was a comedy of errors, Fawlty Towers style with wrong orders being brought to the table, menus with misleading photos, the menu's currency in Yuan. The customers around us banded together in sympathy when something had gone missing or delivered to the wrong table. 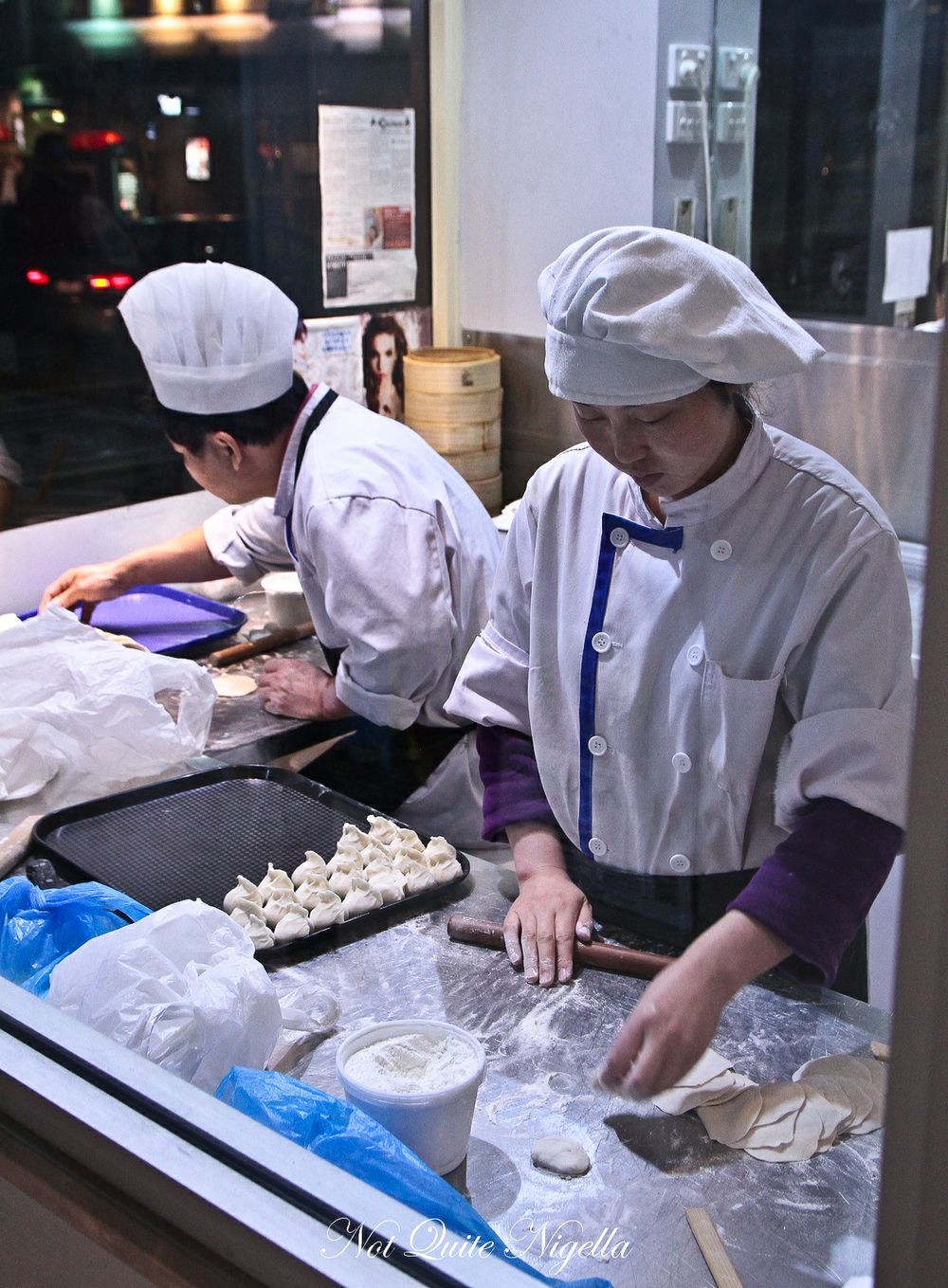 Things have thankfully improved this evening and our booking for four has a table reserved for us towards the back. The interior is new with a window full of dumpling makers. The owner is the son of the owners of Shanghai Night just down the road and he has brought his dumpling makers with him. The space is long and rectangular with white tiles that are vaguely bathroom-like. 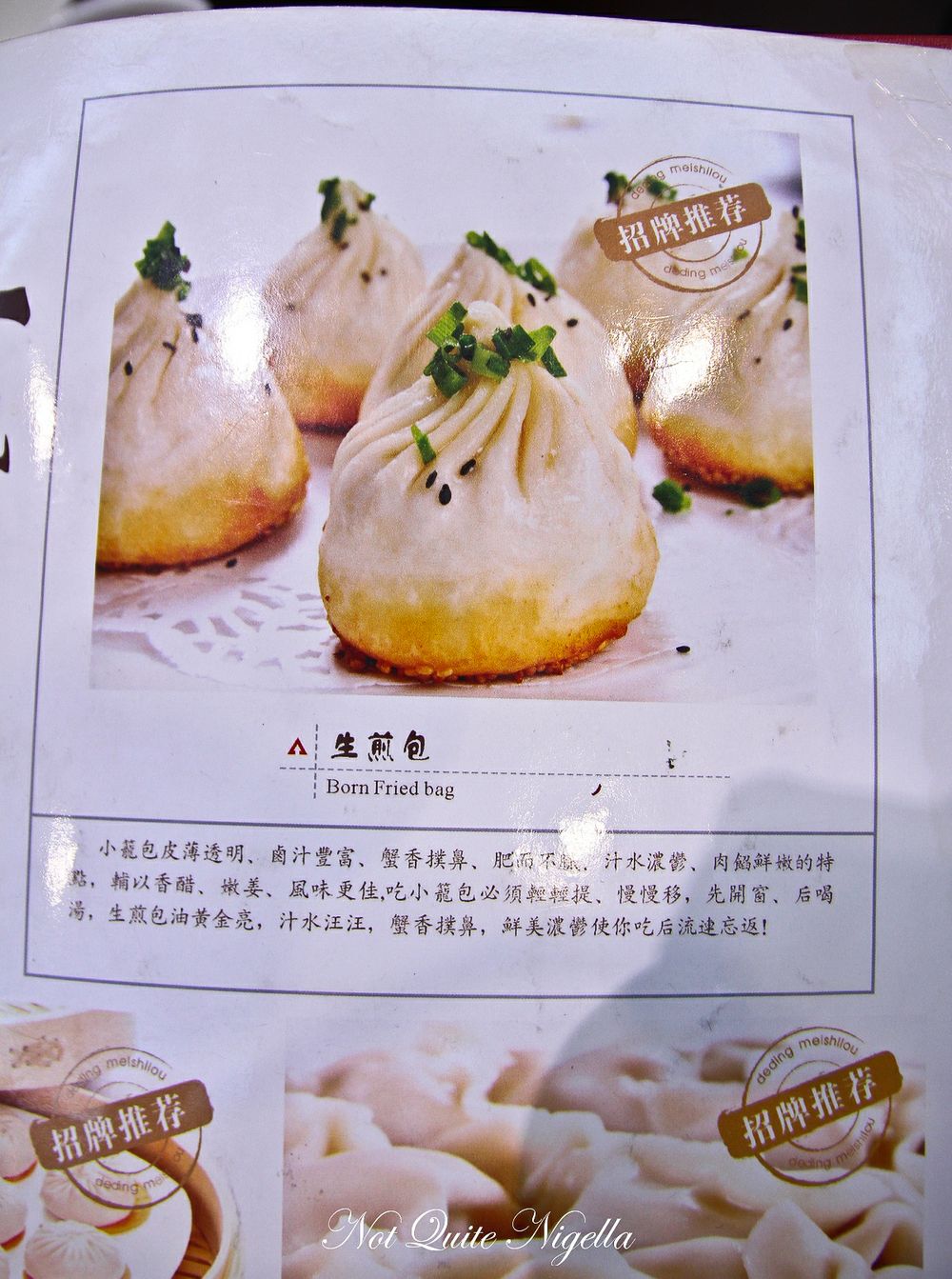 The menu's cover is already covered with pen marks and there also a laminated double sided colour menu. The latter  has things grouped in themes like "crab meat" and "chilli" whilst the other menu is more of a traditional menu, not unlike the one at Shanghai Night. One thing we learned with the previous visit was that often the pictures don't match the items on the menu - the owner had explained that they bought the pictures and had the menus printed up in China so when we ordered prawn balls from the picture and honey king prawns came out, we were initially baffled as to why. 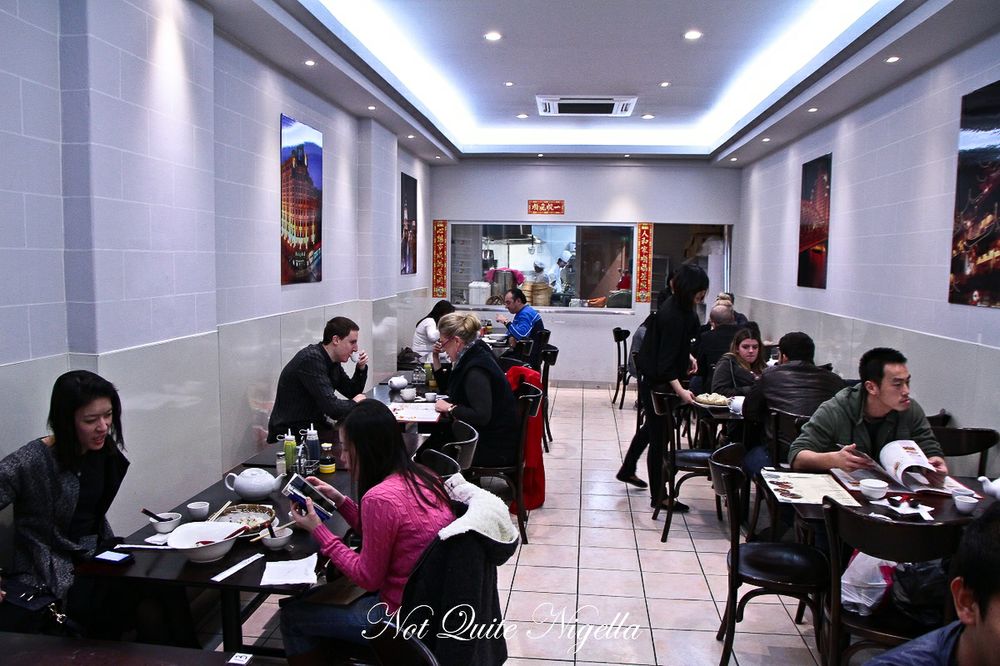 It takes me a good 10 minutes to circumnavigate the menu - I'm not sure why it's so confusing and hard to choose but it is. We make some orders for the dumplings, always a crowd pleaser and a must for filling Mr NQN's tummy. My mother Rose loves things that are deep fried and my father Ronald, well he likes anything that might be Cantonese. 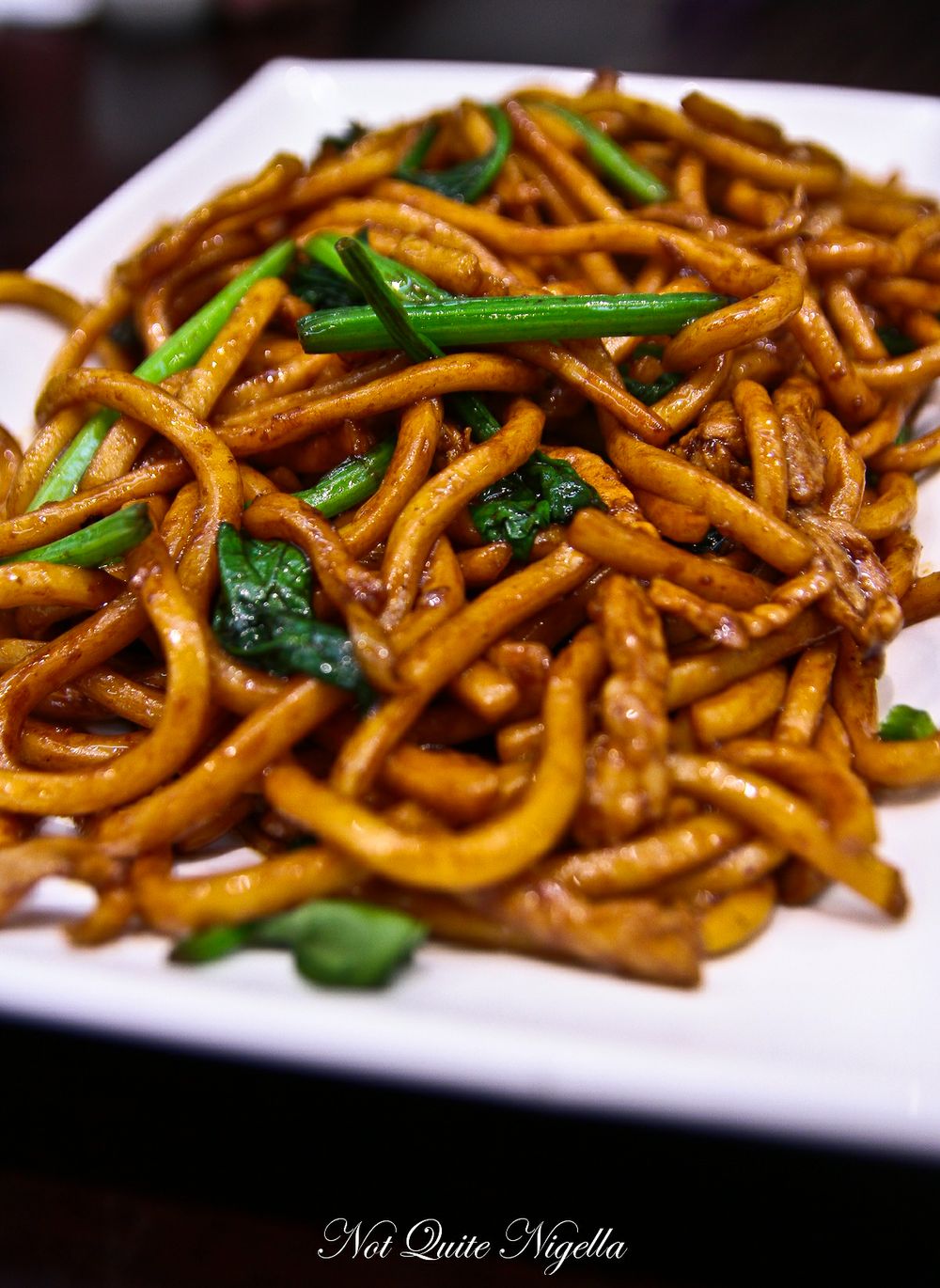 Shanghai hand made fried noodles with pork and vegetables $8.80

The food comes out quickly - like within 10 minutes. We start with an item that we see brought to many tables, the hand made fried noodles with slices of pork and greens. The noodles are springy and lightly chewy and we all enjoy these although I'm not really fond of the pork used in the noodles. 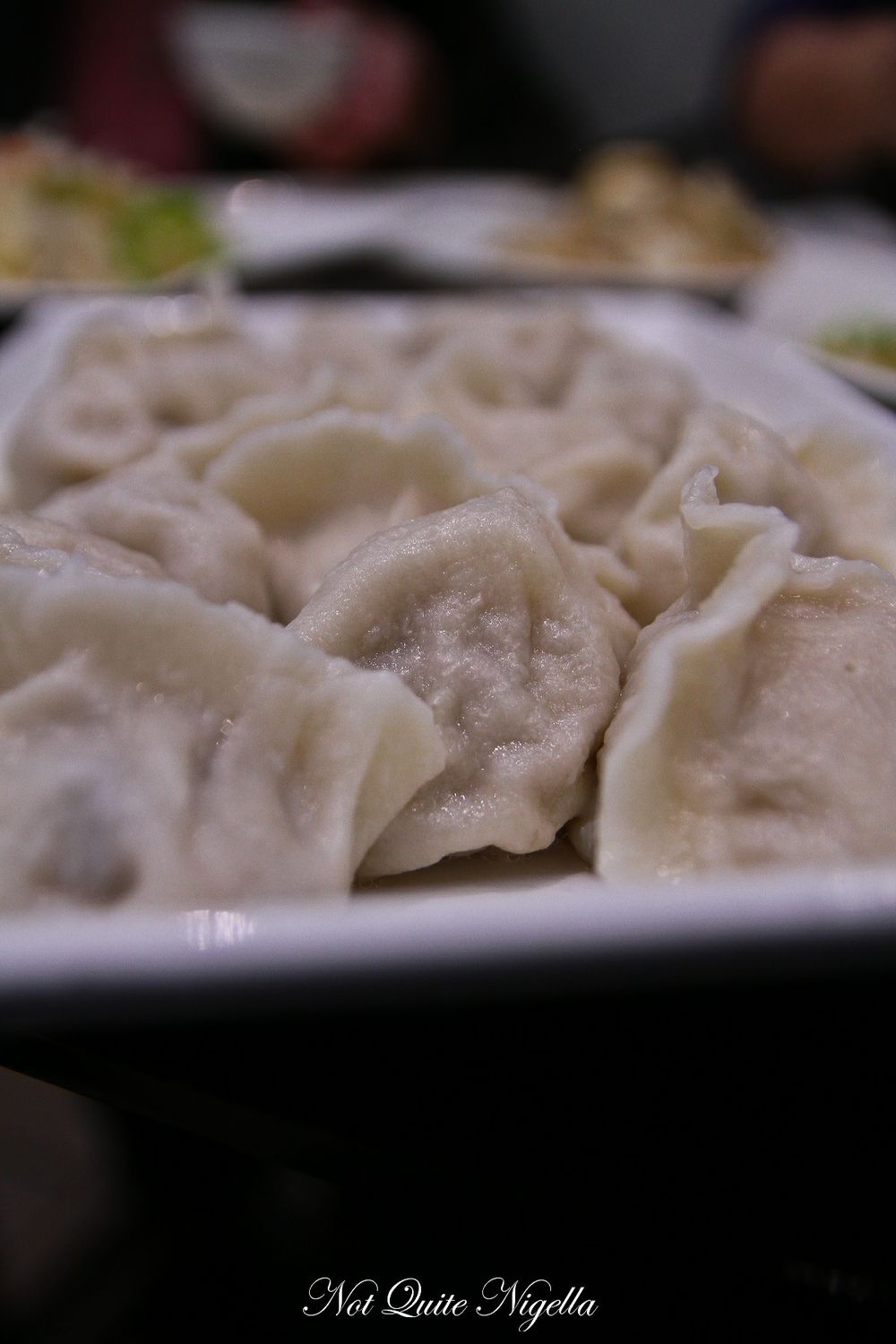 We always seem to have a case of over-orderitis but we feel somewhat safe in the knowledge that for 20 cents a container, you can take it home and we can dinner for the next night sorted. The steamed dumplings are out next and we have chosen the beef and leek and the chicken and coriander, the latter favoured by most except for Mr NQN (he is so contrary! :P ). 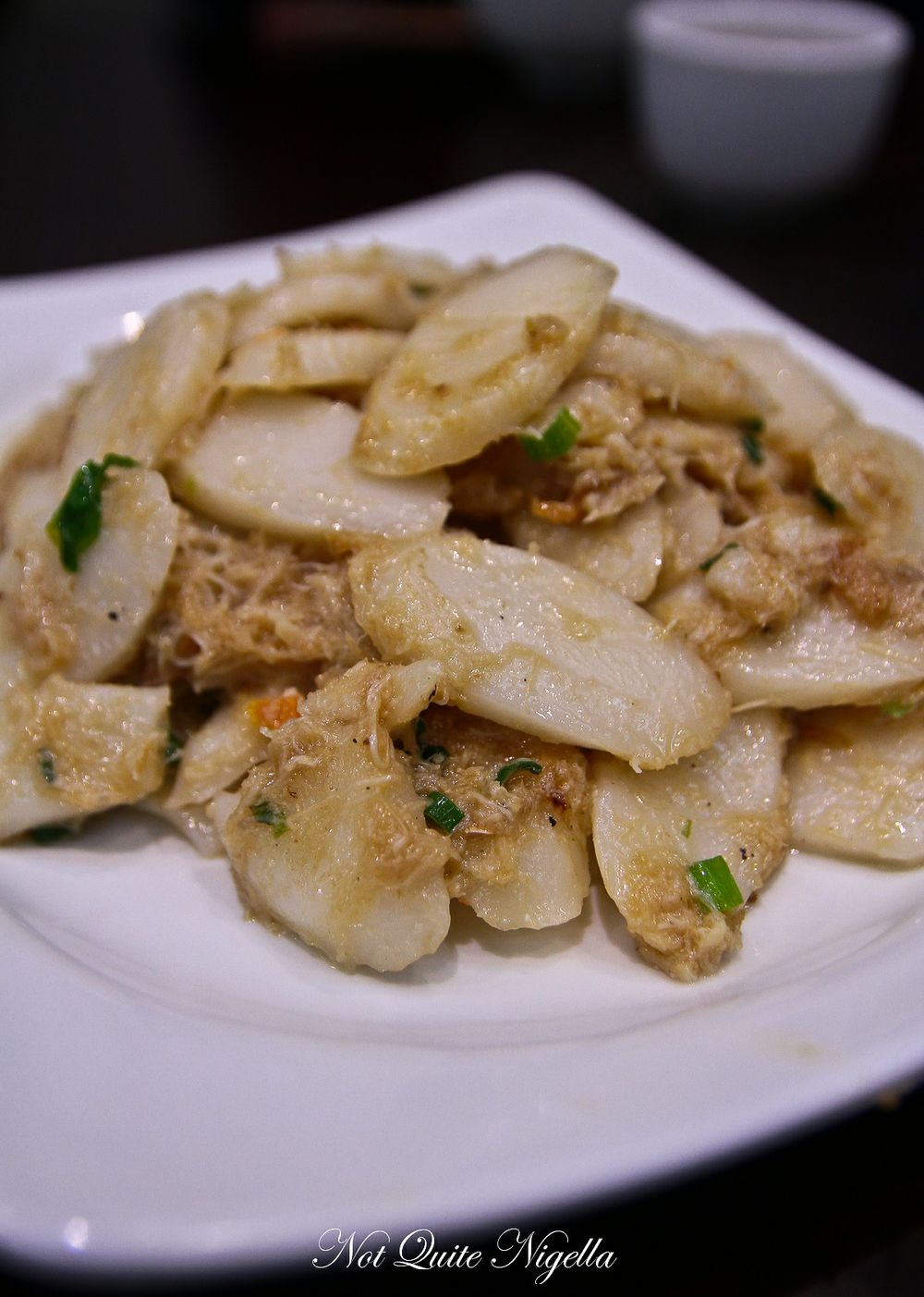 We had originally ordered the blue swimmer crab with Chinese new year's rice cake but that was sold out so we went with just the crab without the shell. We figured for that price, you would either get very little crab meat or not the most freshly picked crab meat. We ended up with quite a bit of rich crab meat with a ginger and shallot sauce with slices of spongey, squeaky new year's rice cake. 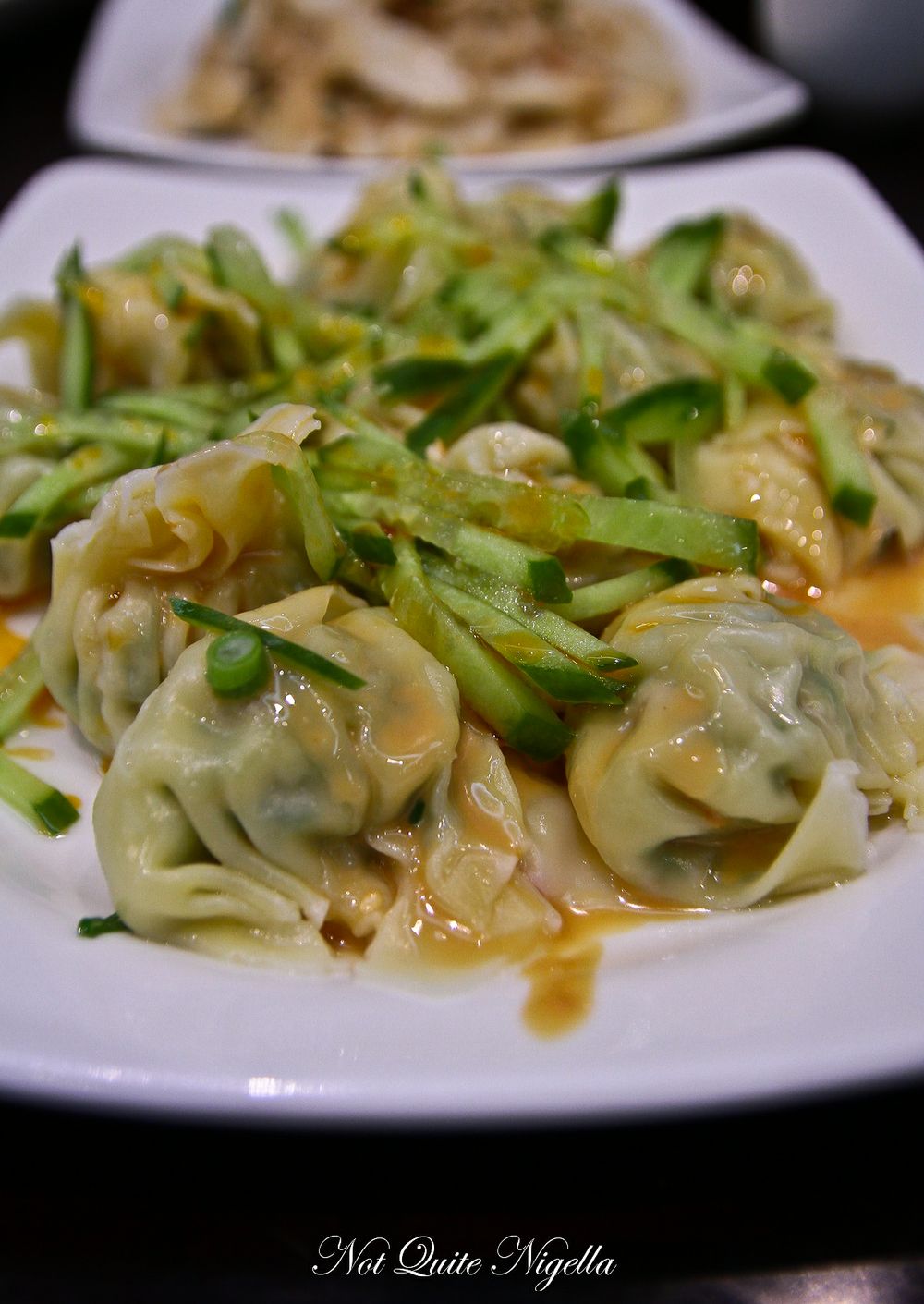 I was hoping to have something similar to the chilli wontons I had eaten at Hu Tong in Melbourne but these didn't have chilli on it so much as a liquidy sesame paste and batons of cucumber. The wontons themselves were quite watery and I'm not a huge fan of the sesame sauce on dumplings. 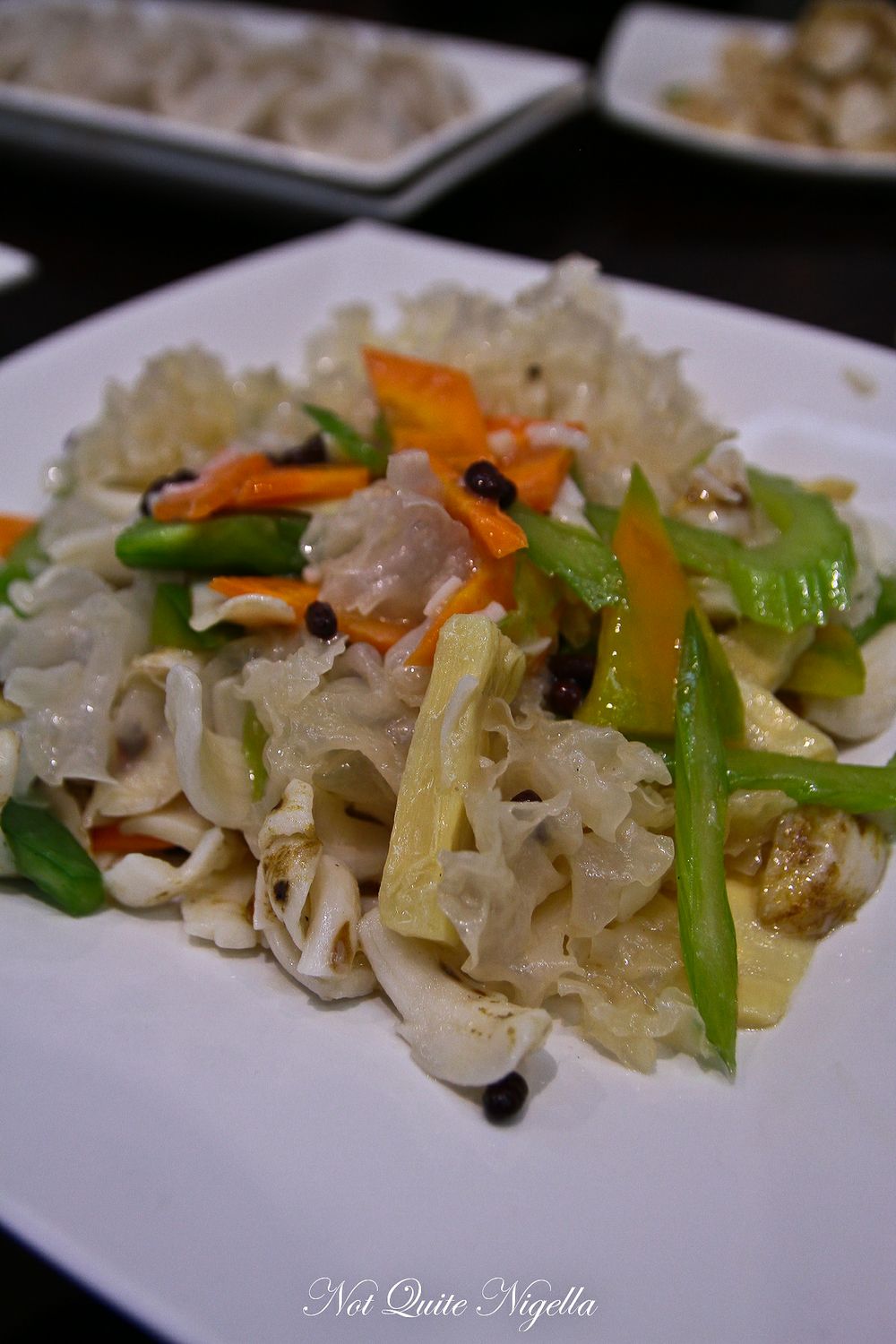 "That is a bit of a dud dish" Mr NQN said and I had to agree. I had actually ordered the one above it but this one arrived instead. It has a range of crunchy vegetables, lotus root, lotus nuts and crunchy white fungus mushrooms although it needs more flavour added to it. When the owner asks us how the food was and we told him that we didn't really fancy this dish, his supposed "maybe it was because the vegetables were frozen." 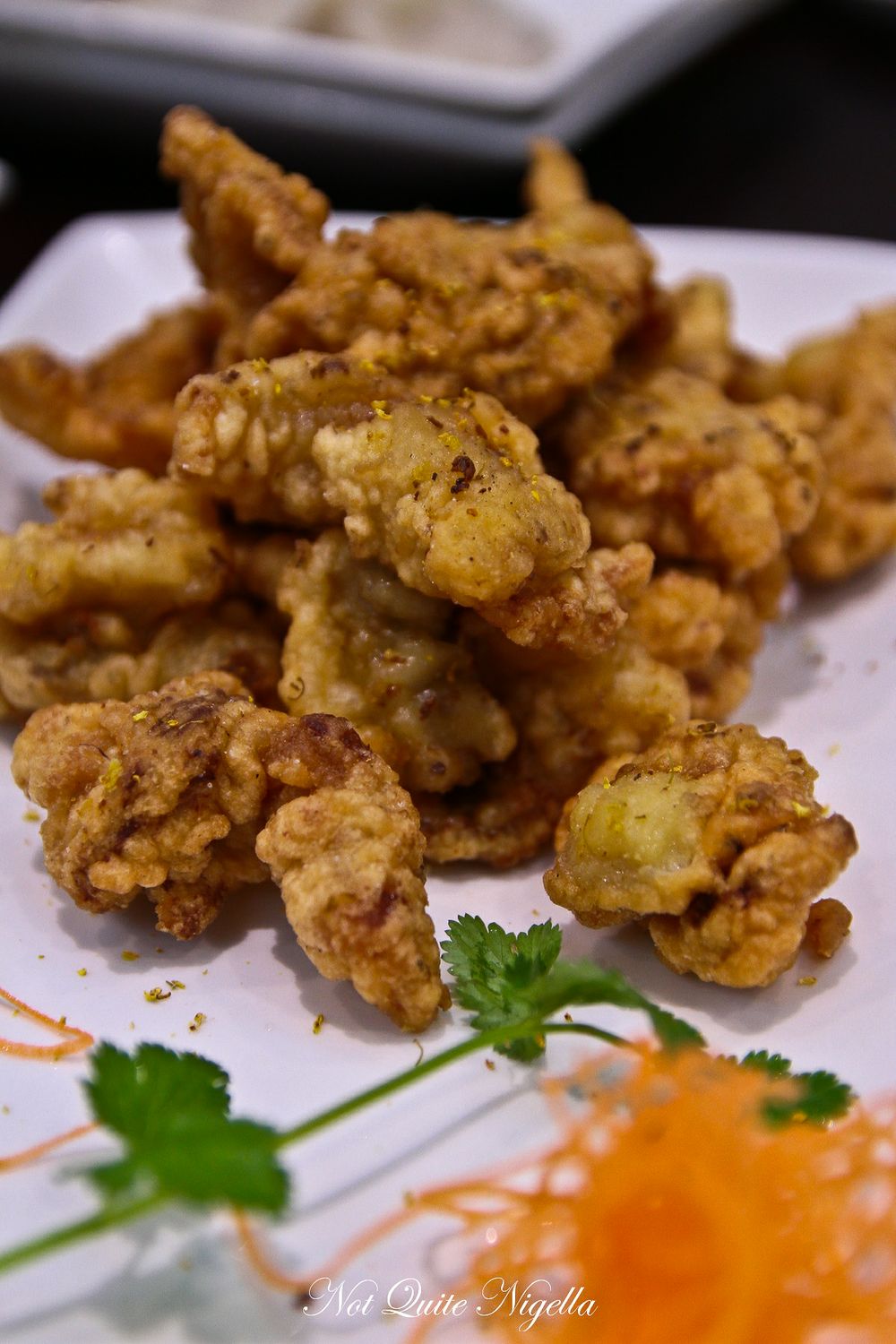 The deep fried pork came dry fried and not greasy at all with some dried osmanthus flowers on top which gave it a sweet, floral flavour. 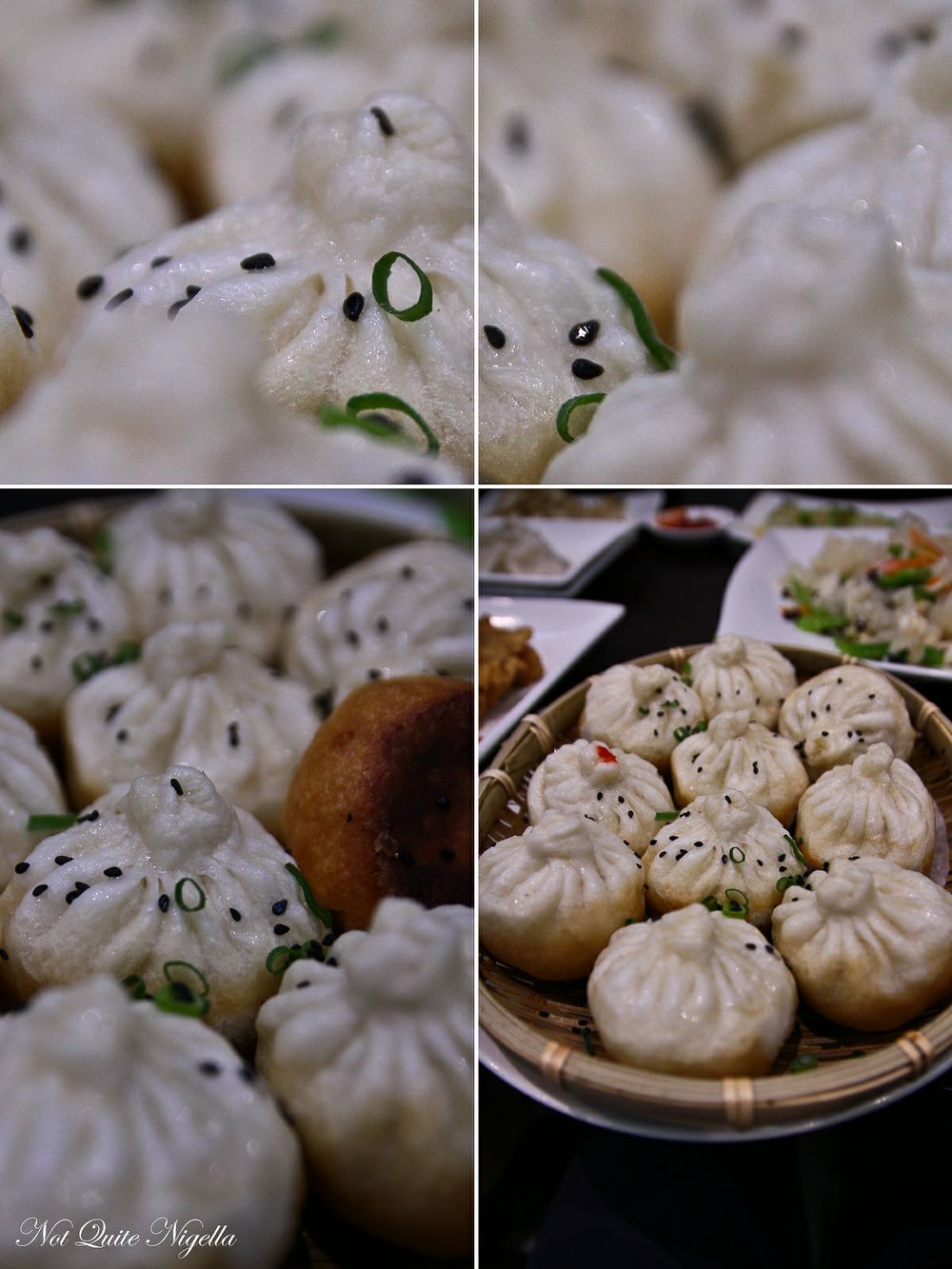 The pan fried dumplings are a favourite at the table. They've got crispy bottoms and a soft pudgy top which hides a gingery broth and a ball of soft pork and crab mince. The man next to us listening to music on his iPhone has just a single plate of these to himself and he looks immensely happy. 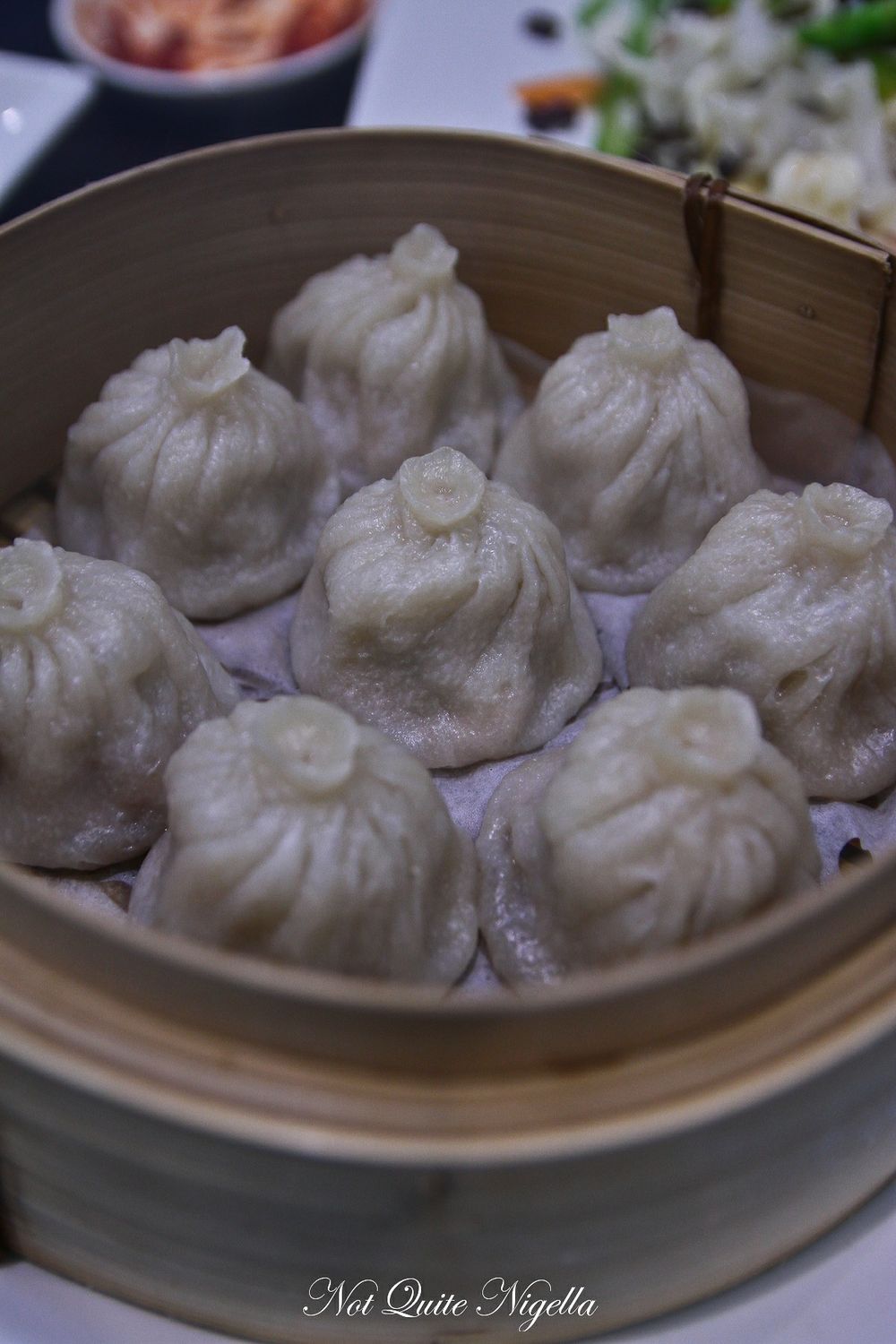 The xiao long bao were the last to arrive but they were worth it. Plump, just bursting with gingery soup the skin was thin and delicate and a little nip from our teeth released the warming broth. So whilst the non dumpling dishes left us a bit nonplussed, the dumplings were a crowd pleaser.

So tell me Dear Reader, do you revisit restaurants if you've had a less than stellar experience to give them another go? 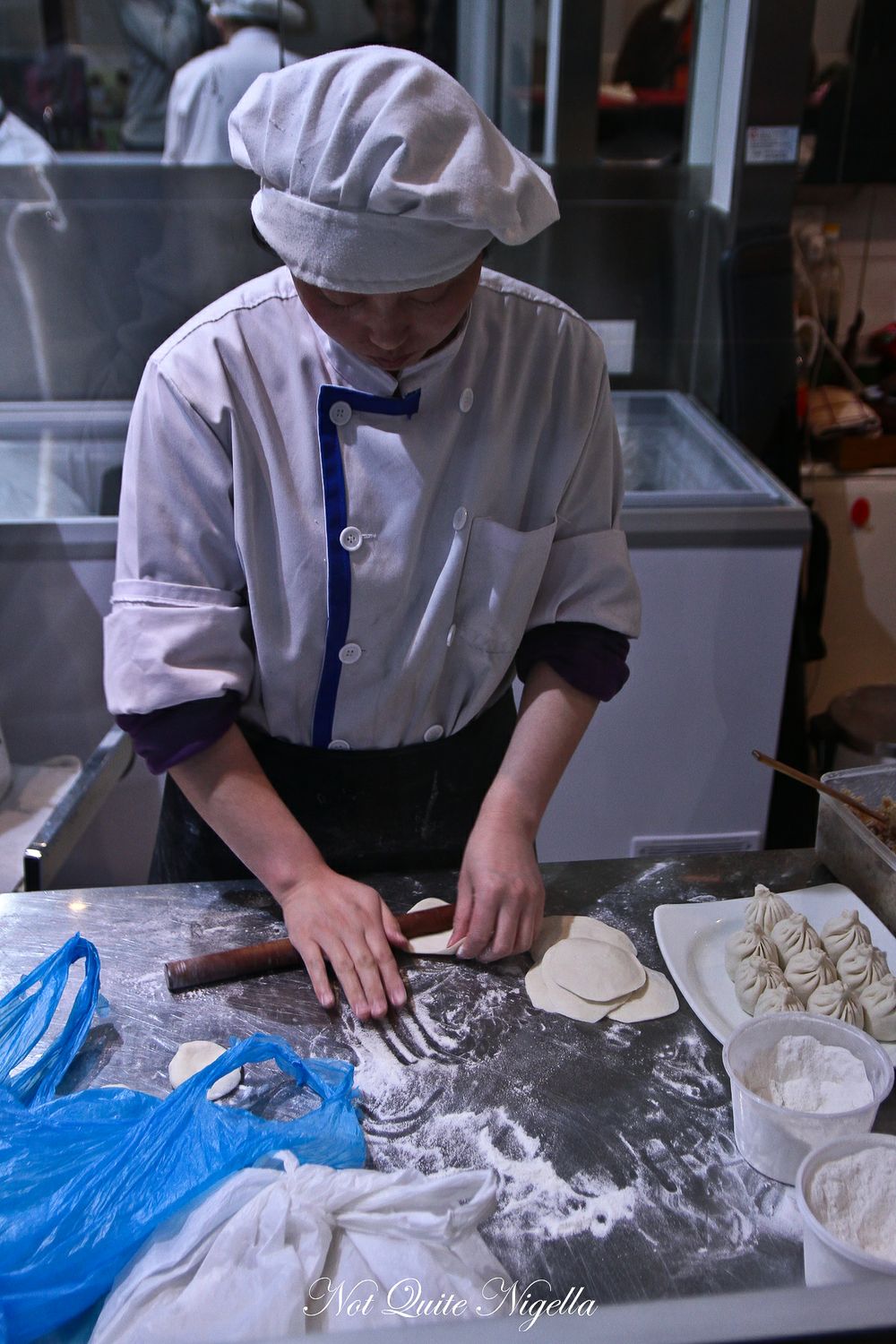