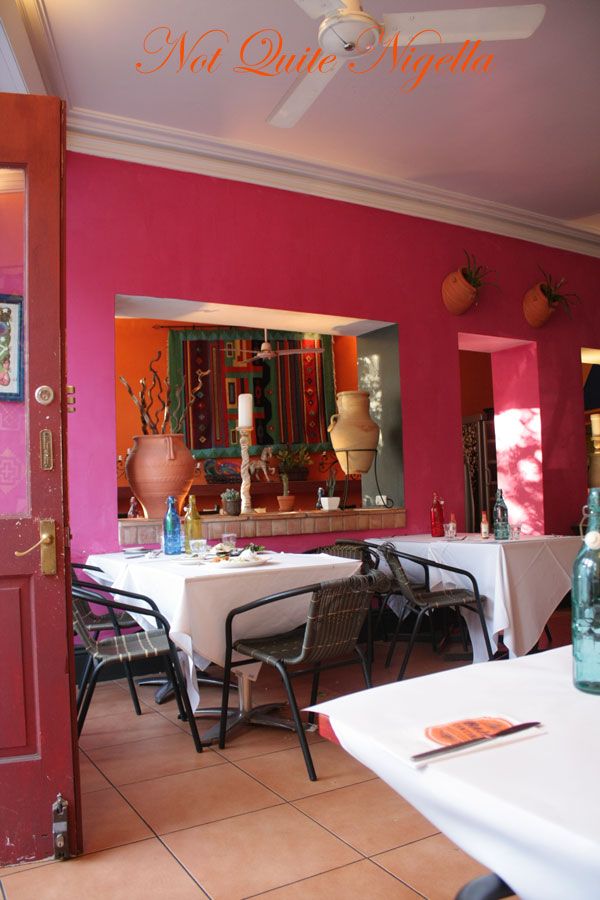 I was very curious to visit Baja Cantina for a few reasons. Most recently, they were a winner on the TV Show The Chopping Block in which they earned the show's highest rating and muy praise from the critic Alan Saunders who said "I could marry the (Chicken) Mole." I was also curious as Rob, the outspoken and at times arrogant chef of Baja Cantina, not so subtly spammed my recent Flying Fajita Sistas visit and there was a little exchange of words between him and a FFS supporter. Watching the show it seemed that his main goal was to win the $20,000 and adamantly resisted change so I was curious to see whether the food continued to do marriage worthy. 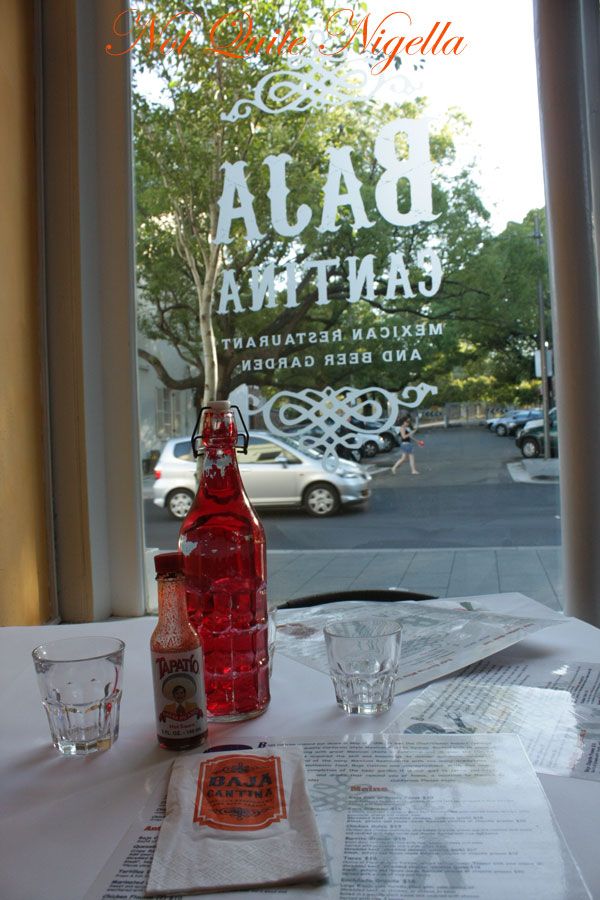 Tonight we're visiting for Teena's birthday for what she calls "The Battle of the Burrito" (well she works in Marketing so she can't help it ;) ). We also have Gina, the Tex Mex lover and Canadian who would often cross the border in search of good Mexican food. Getting into the restaurant is a struggle for me - as I tug on the left hand set of doors I find them firmly closed shut but I can see two diners inside mid-meal. They point me towards the other set of doors to the right which I manage to open and enter slightly embarrassed. A few minutes later I watch my friend Gina do the exact same thing with the doors and we both wonder why there wasn't a sign saying to use the other door. Our waitress tonight is friendly and happy to recommend items. We choose a few dishes including the two dishes that the critic raved about on show and as we wait for our food, more patrons enter, some sit in the front room whilst a large group sit out in the back garden area. The menu is very reasonably priced with most mains hovering around the $14-$16 area with the most expensive being $20. I see Rob the chef on the phone and the tattooed waiter serving tonight. 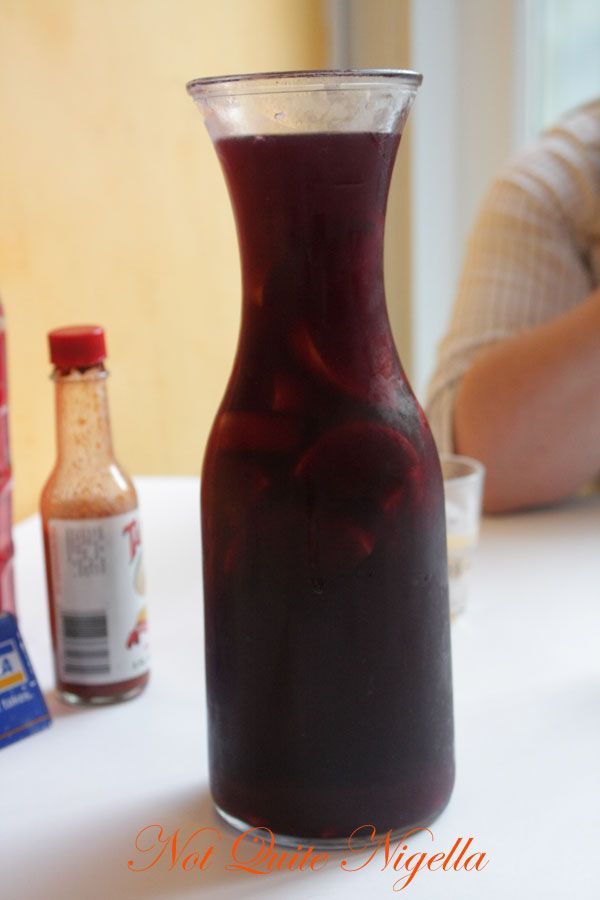 We start with a big jug of sangria which is nice and fruity. I don't usually drink a lot of alcohol as I have an allergic reaction to most wines, especially if they're the cheap and nasty variety but this was pretty good and packed with fruit and luckily I didn't have a reaction. 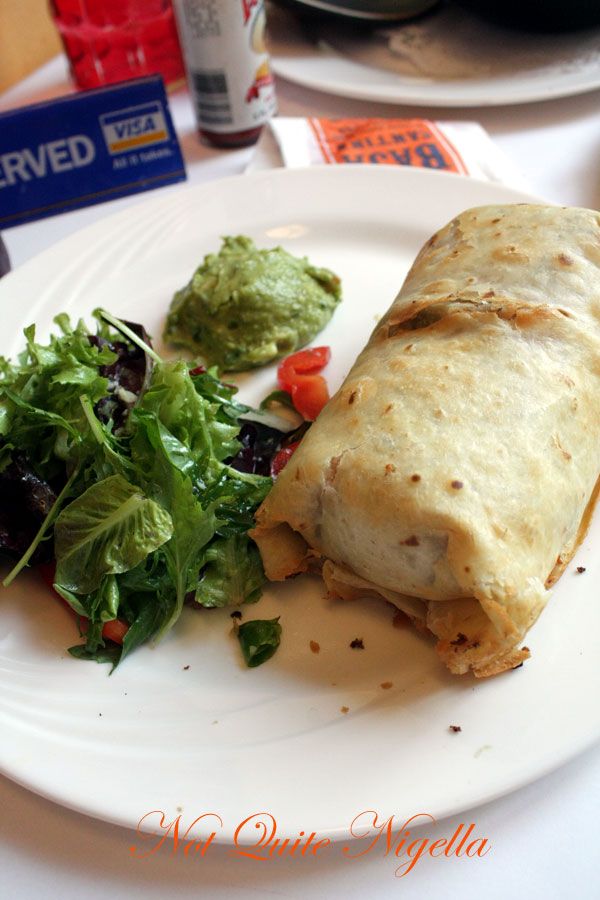 Chimichanga with chorizo and potato $20

Our food arrives shortly after and we start with the Chimichanga with House made Mexican chorizo. Our waitress explained that it is different to Spanish Chorizo in that it is the mince without being encased in a skin. It's delicious and filled with rice, beans, potato and plenty of chorizo sausage and spice. Whilst I felt that the Flying Fajita Sistas Chimichanga was a little dry, this is not, especially when paired with the guacamole. 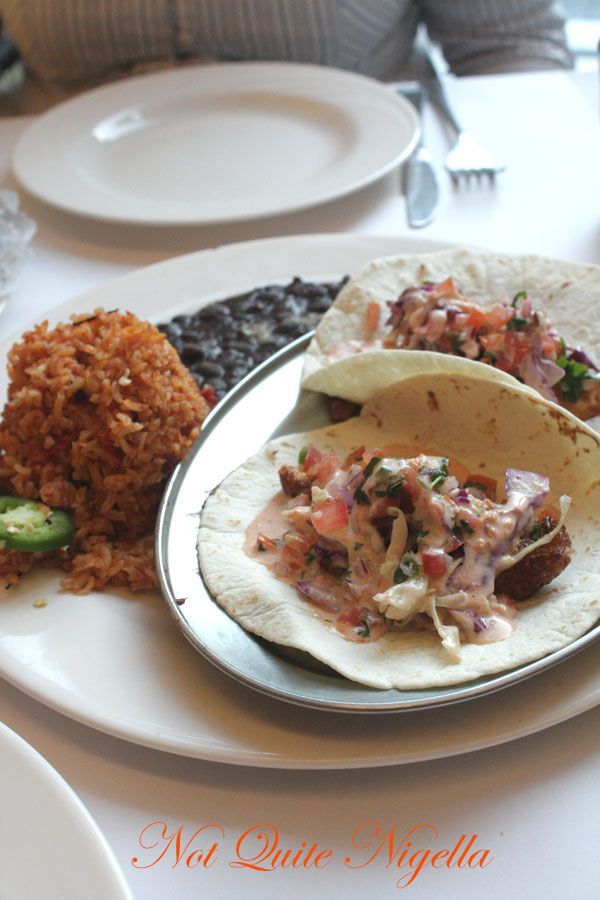 The Baja Fish Tacos are next and I asked the waitress if it is fresh rather than frozen fish and she confirms that they are using fresh fish (they used frozen prior to the show). As there are two tacos which we were already forewarned about, we decide that they're a bit hard to divvy up so we ask for another so we can each have one. 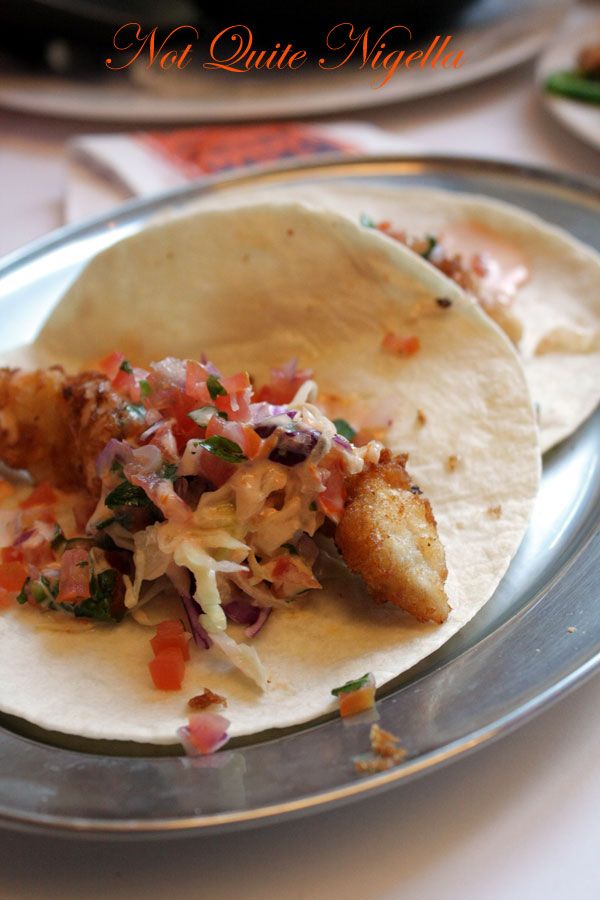 They bring us two extra instead which is nice of them and nice for us as these are delicious. Filled with freshly cooked battered flathead fish it's also stuffed with a coleslaw type of salad and dressing. The accompanying rice is flavoursome and the black beans a perfect accompaniment. 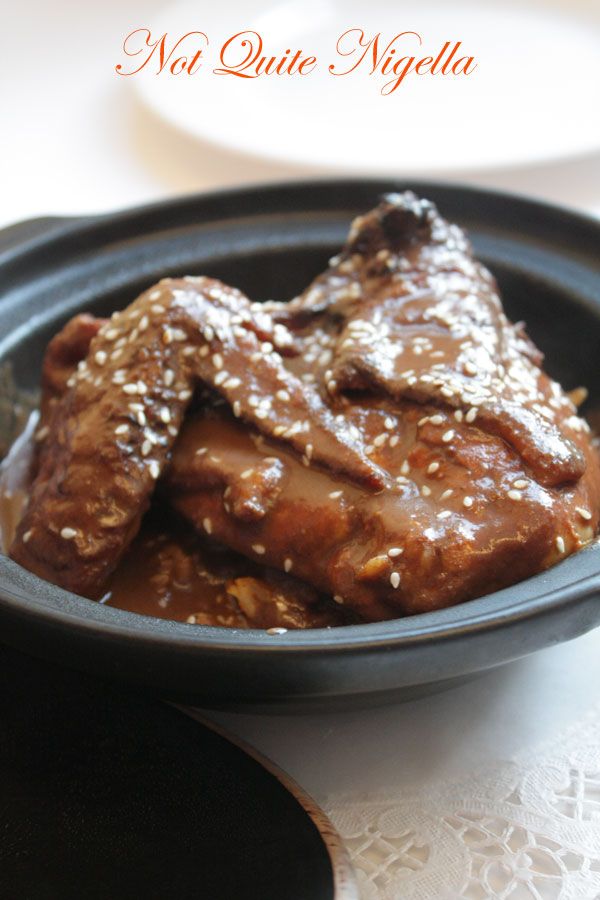 The third dish is the Chicken Mole, the one that the critic declared that he would marry if he could. If you haven't seen the show, it's one that was previously served off the bone with the sauce on top rather than having the chicken cooked in the sauce but after some heated discussion with Matt Moran, it was cooked in the sauce and served on the bone. We see that it's still served in black ceramic pots, on the bone and cooked in the sauce and sitting on a bed of mole sauced rice with some accompanying refried beans and 3 flour tortillas. The mole is delicious, as gorgeous as a mole should be and often isn't, the chocolate judiciously applied so that it's sweet but not overpoweringly tasting of chocolate, instead more given a mysterious air from the chocolate. The rice underneath is gorgeous and whilst we appreciate the tortilla, we don't really need it. The refried beans with a streak of yellow fat have an unusual and not very appetising aftertaste and we leave most of those. 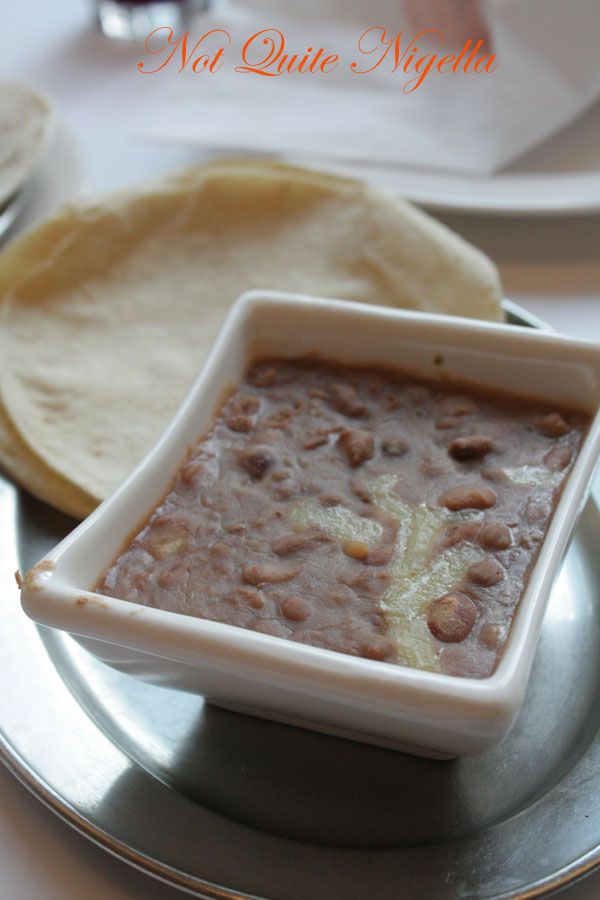 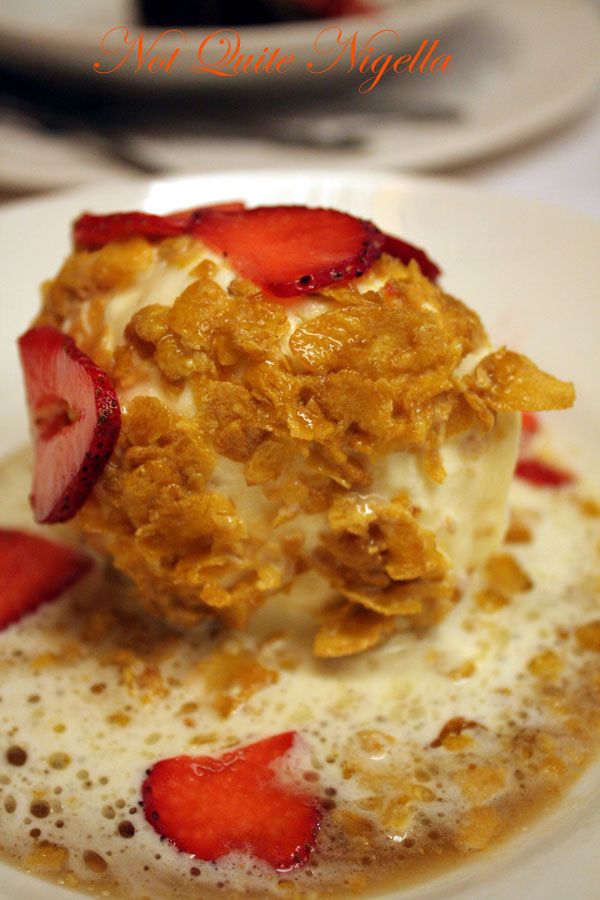 The deep fried ice cream is similar to what was described but seems to lack any sort of deep frying at all, just a timbale of ice cream with some crunchy nut cornflakes stuck to it with some butterscotchy caramel sauce. We're more confused than anything about where the deep frying comes into it. 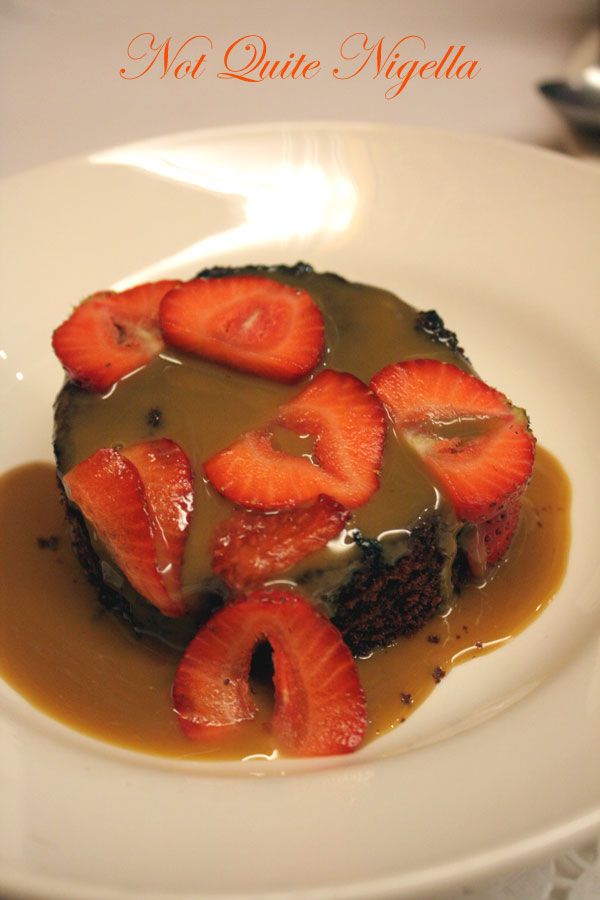 The caramel chocolate cake concerns us. The Caramel sauce is different from the butterscotch caramel of the ice cream and indeed it tastes just like Cottees Diet Caramel bottled sauce and after one sample spoonful we push it away, the aspartamey taste too odd and bitter for us. Our waitress asks us how our desserts were and we hesitate for a second before explaining that whilst the ice cream lacked deep frying it wasn't bad, the caramel chocolate cake gets a resounding thumbs down for us. She apologises and explains that the Head Chef insists on using bottled caramel sauce for it and deducts it from our bill. 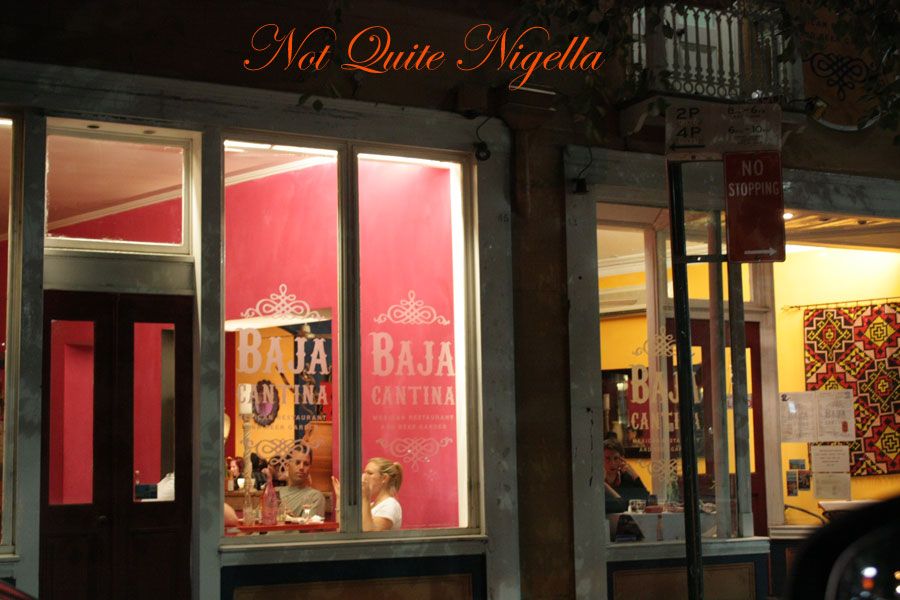 Teena and Gina ask how I would compare it to Flying Fajita Sistas and it's hard to say as I had different dishes but of the dish in common, I did prefer Baja's Chimichanga. Atmosphere wise they're both different with Flying Fajita Sistas being a noisier, more dimly lit place to eat whereas Baja seems to have a more family atmosphere. However I will bring my husband back for the Chicken Mole and to try more because as much as we didn't like the desserts, we adored the mains.

If you're curious to see the episode of The Chopping Block that featured Baja Cantina, the entire episode is on Youtube (broken up into 6 parts). 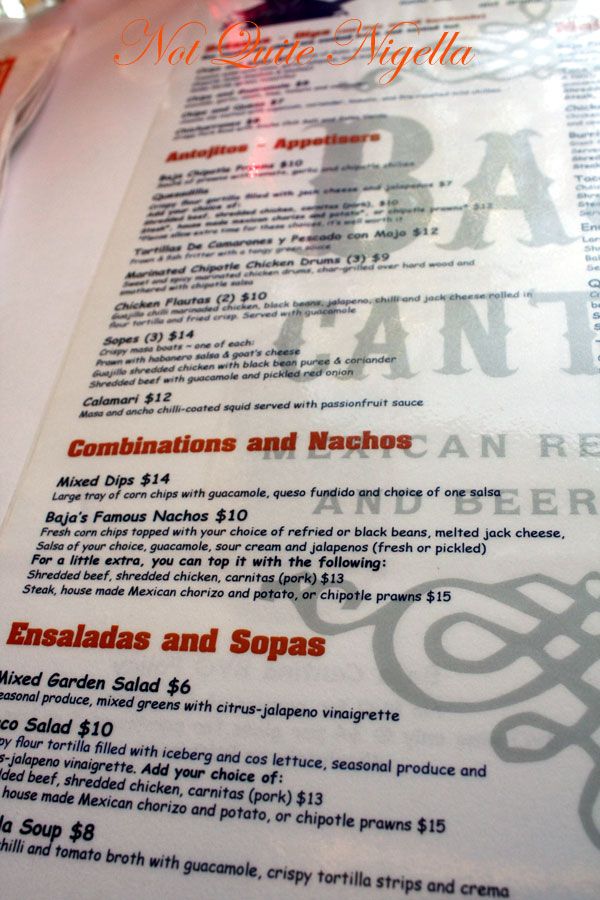 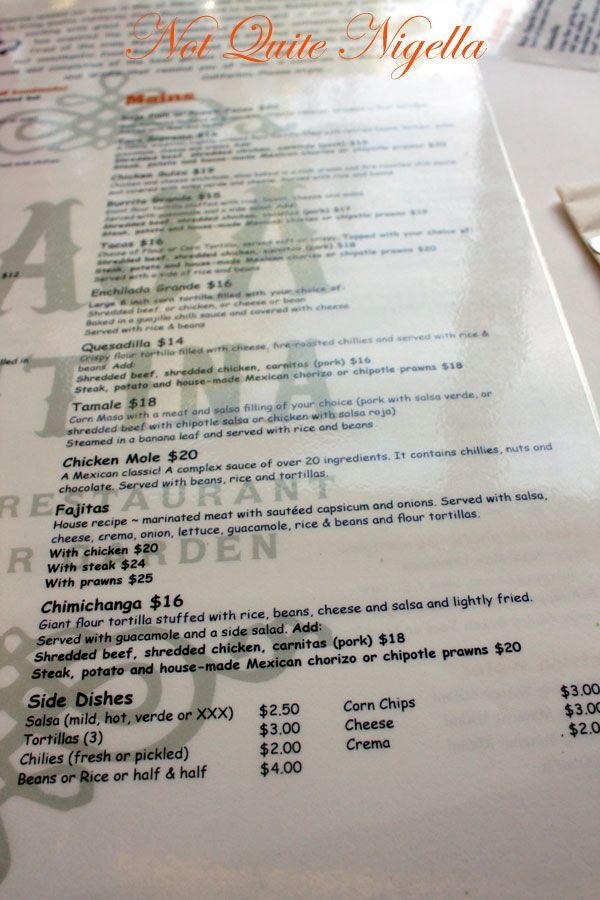