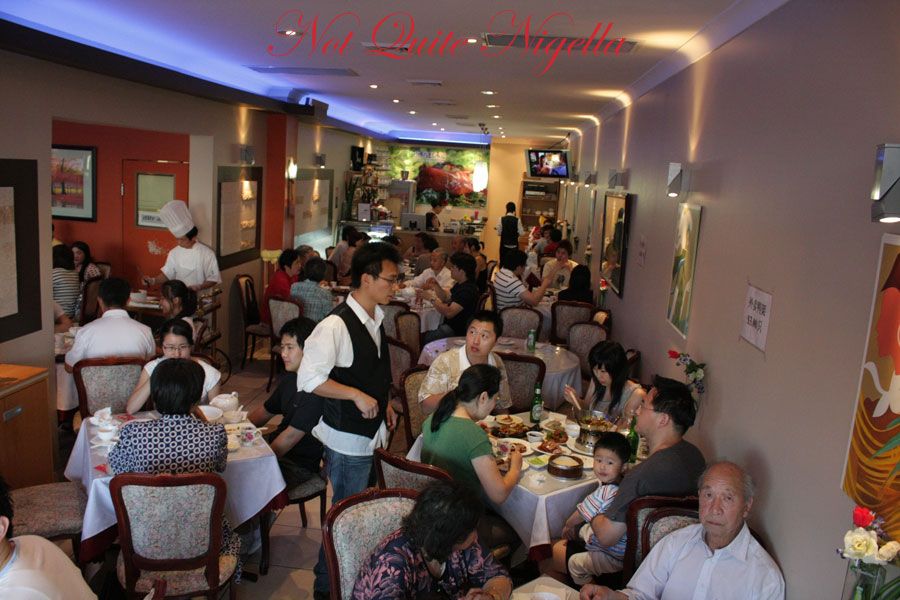 For those readers outside of Australia, Beverly Hills zip code 2209 in Sydney is really not very similar to Beverly Hills 90210 in L.A. I recall reading a tongue in cheek comparison of the two suburbs and whilst 90210 is glamourville, 2209 in Sydney is a down home suburb largely absent of Porsches, celebrities and multi million dollar Mansions. It was in an odd way funny that we were going here for my father's birthday, on January 1st, as I had just finished the Tori Spelling autobiography sTORI Telling which was a surprisingly entertaining read, her father of course producing 90210 and she starring in it. Don't judge me. My next book is Outliers by Malcolm Gladwell, I promise. 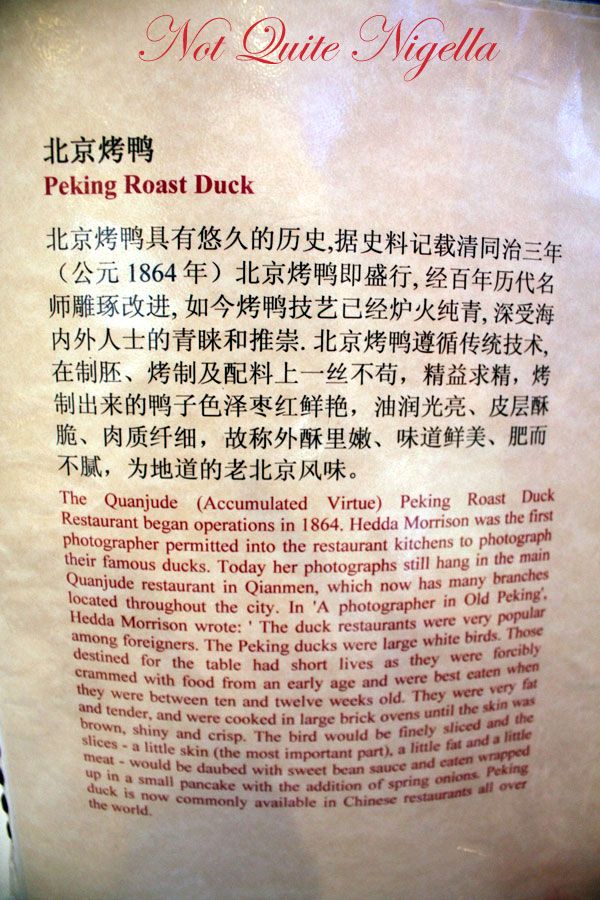 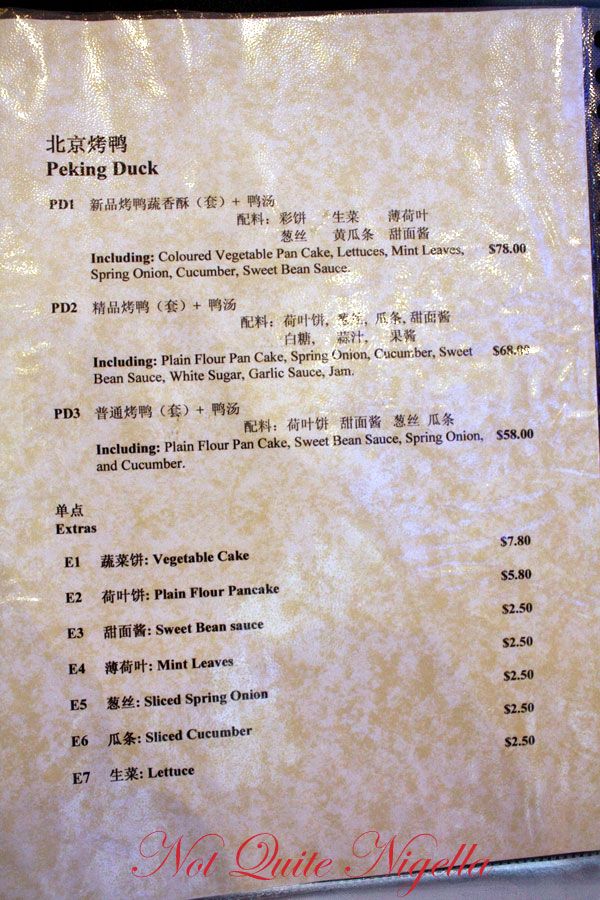 The 3 types of Peking Duck on offer

I wanted to visit here after reading about Belle's visit in which she talked about the Mantou buns with sweetened condensed milk and Beijing or Peking Duck. As the name suggests, their specialty is Peking Duck and they have 3 different versions which vary according to the accompaniments that you order priced from $58, $68 to $78. 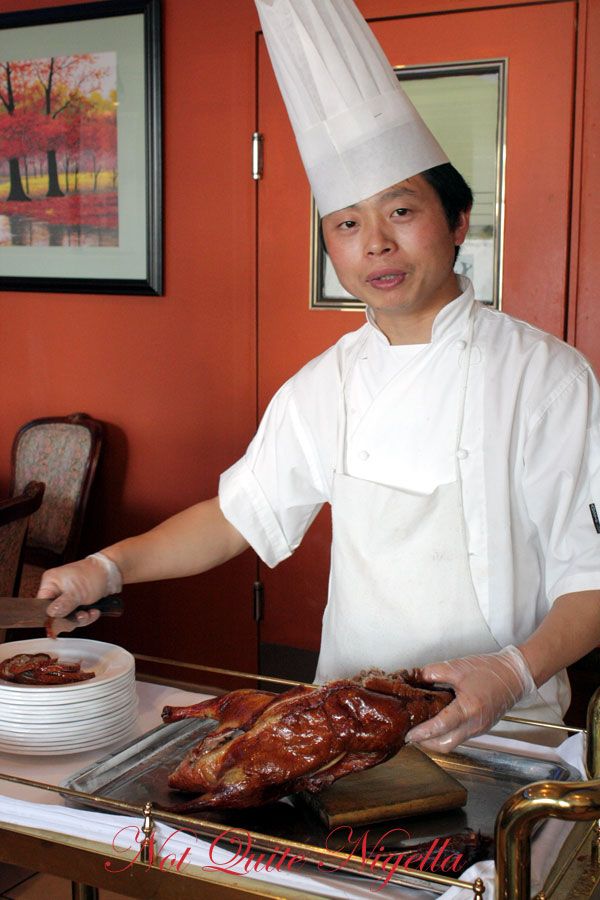 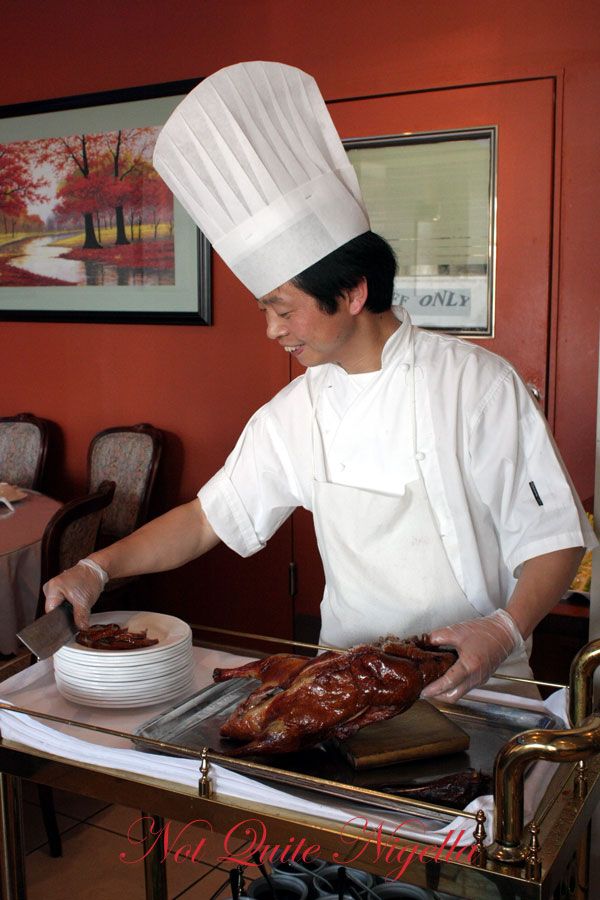 There's a man in chef's whites wielding a cleaver straddling the space between the two rooms and he continually slices the skin and meat off the duck. And we mean continuously as the restaurant is full by 7pm and it seems that everyone wants their duck. 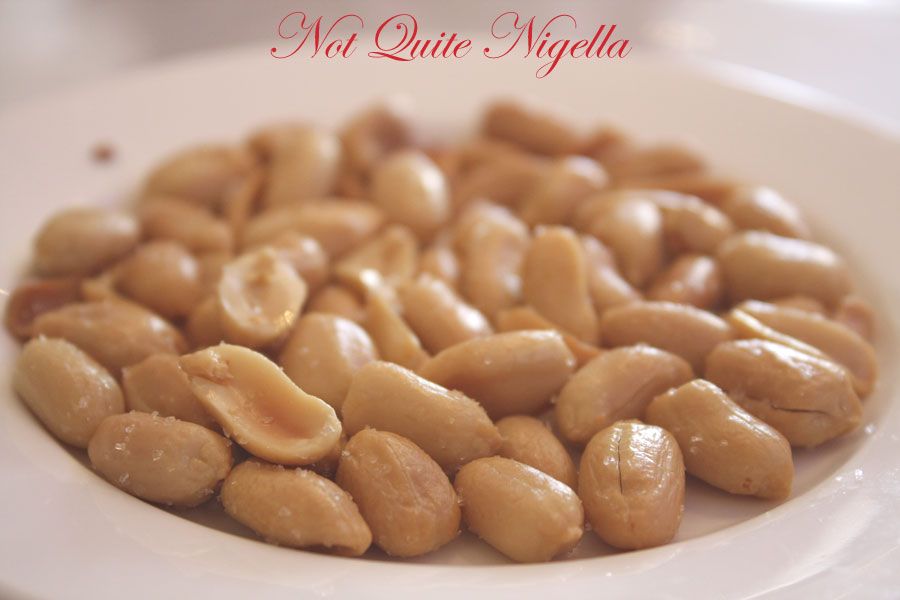 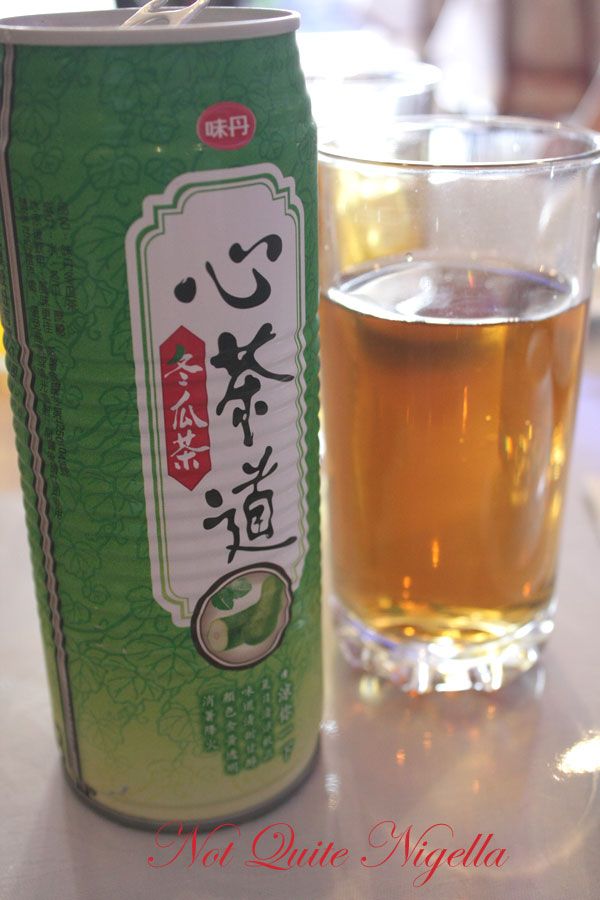 Unlike many Chinese restaurants, tea is charged separately starting at $4.50 per pot so we opt to go for a big jug of apple juice as the weather outside is hot. I am also intrigued by the Green Pumpkin Water drink on the menu so I order this in the hopes of having a Harry Potter moment but it appears that something was lost in the translation and this is Winter Melon juice. Not quite as exciting as a Green Pumpkin juice. It's an unusual tasting drink, very sweet much like an Iced tea rather than a fruit or vegetable juice. 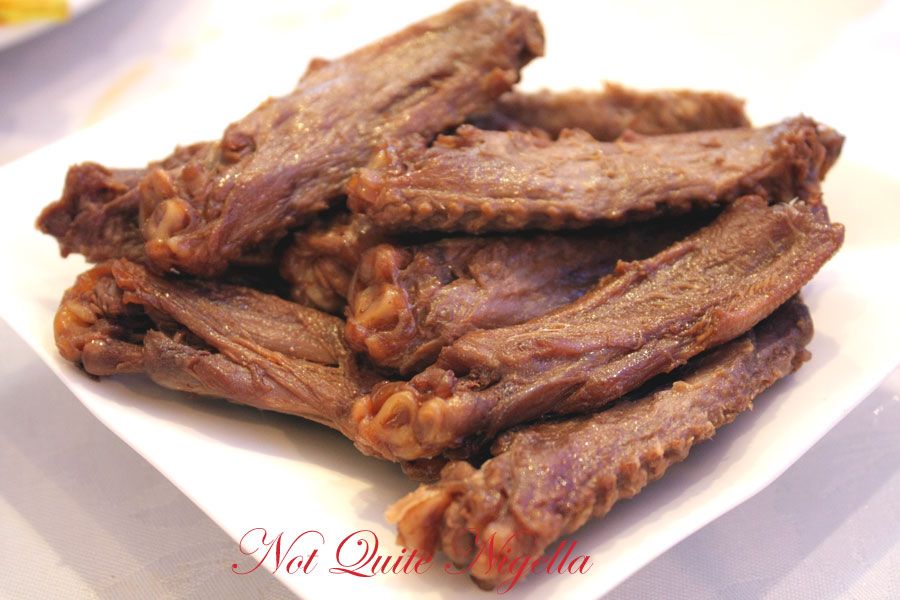 Served cold, this serve is a generous 11 wings, cooked in a slightly herbal tasting sauce. Only my husband seems to take to these although I can imagine these would be nice in a clear broth to help balance out the herbal taste and to warm them up. 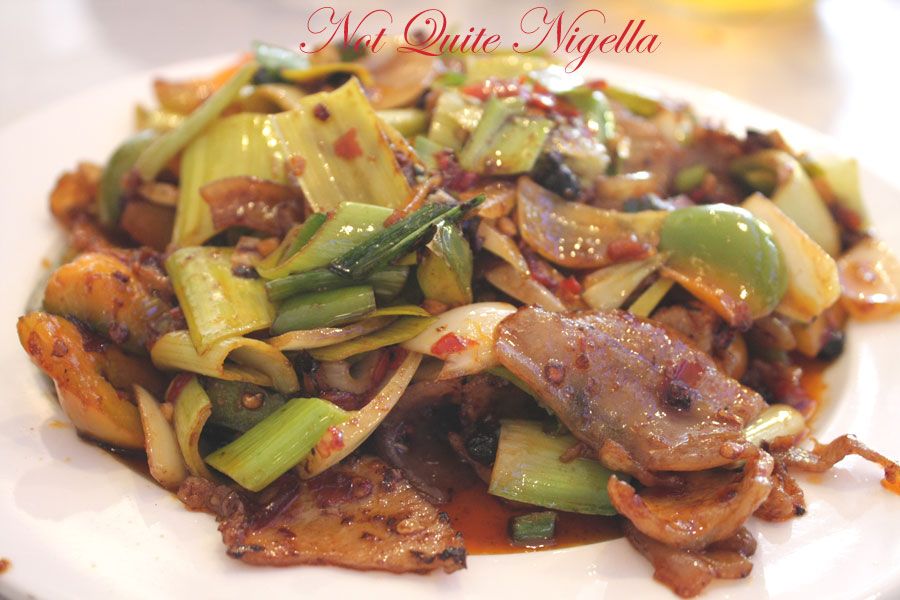 Fried slices pork belly and vegetables with a spicy sauce $16.80

We were confused when we saw this dish as I expected something a bit different but the fried slices pork belly and vegetables with a spicy sauce were quite delicious, the sauce quite spicy with a black bean taste to them. However we find that there is not a great deal of meat in this dish - what ultra thinly sliced pork belly there is is savoured and vegetables make up a large proportion of the dish, including the not particularly nice green part of the leek. I don't think it's a great sign that they use this part as it's usually discarded or used to flavour soups, not as a stir fry ingredient. The amount of them leftover attests to how everyone else at the table found it. 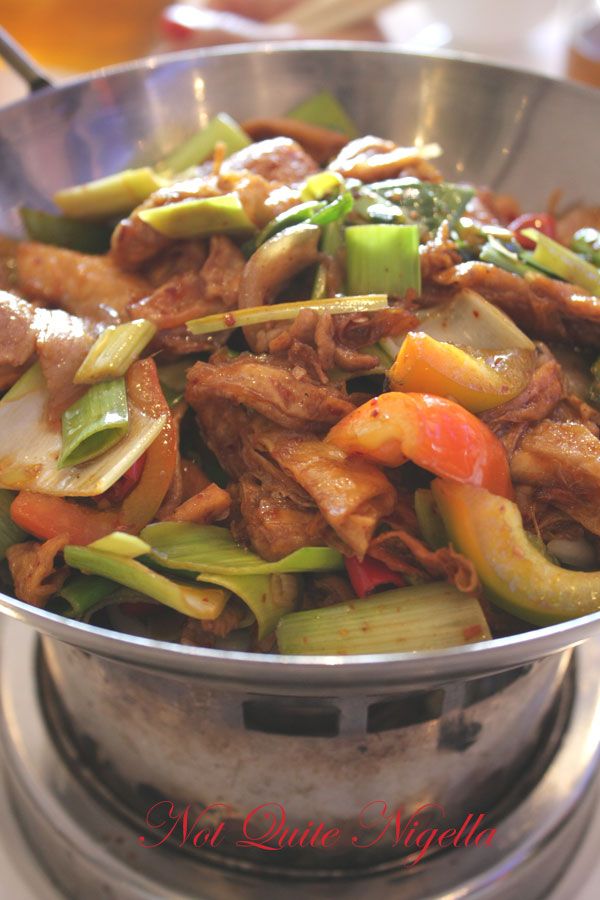 We find the same situation with the griddled bean curd sticks with pork and vegetables. The dish is about 50% onion and only a small amount of pork and slightly more bean curd sticks. A disappointment as the flavours are good and it's just a pity that they pad it out with cheaper ingredients. 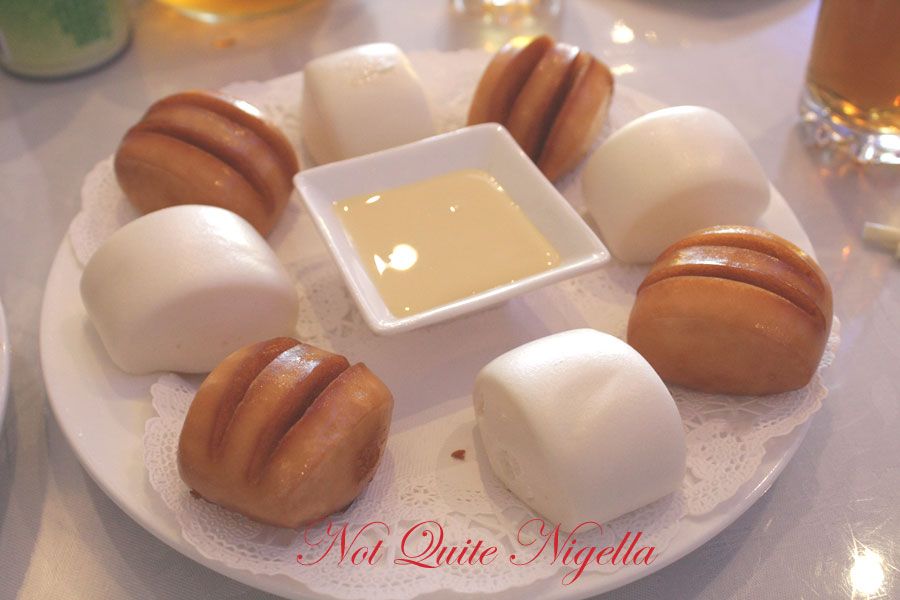 If there's one thing I firmly believe in, it's the power of sweetened condensed milk. It's my Windex. There's nothing that can't be solved by it. World wars and peaces treaties could be brokered with the stuff. So when I see Mantou buns with sweetened condensed milk, it's an obvious order. The steamed buns (the white ones) are pillowy soft and collapse under each bite, the golden ones are deliciously airy, crispy and light. 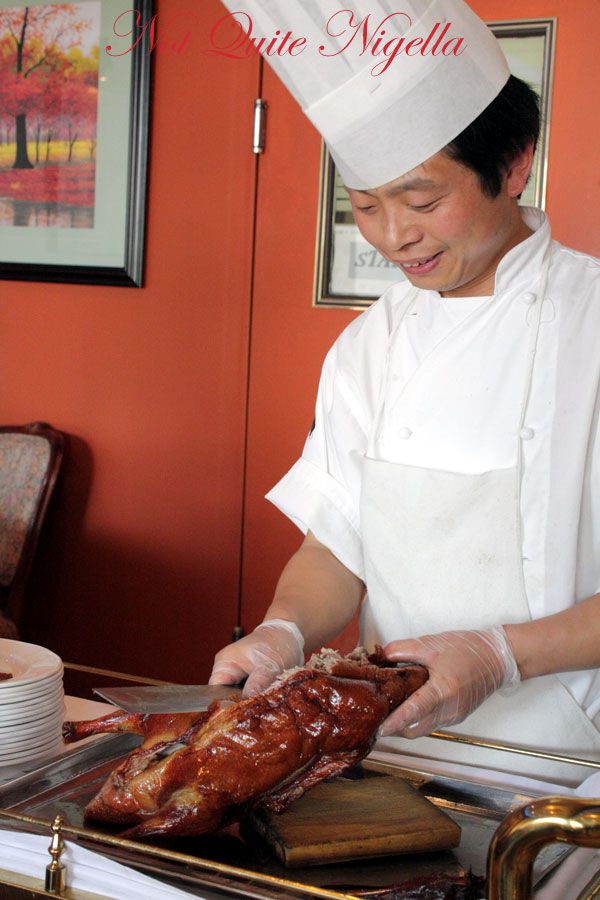 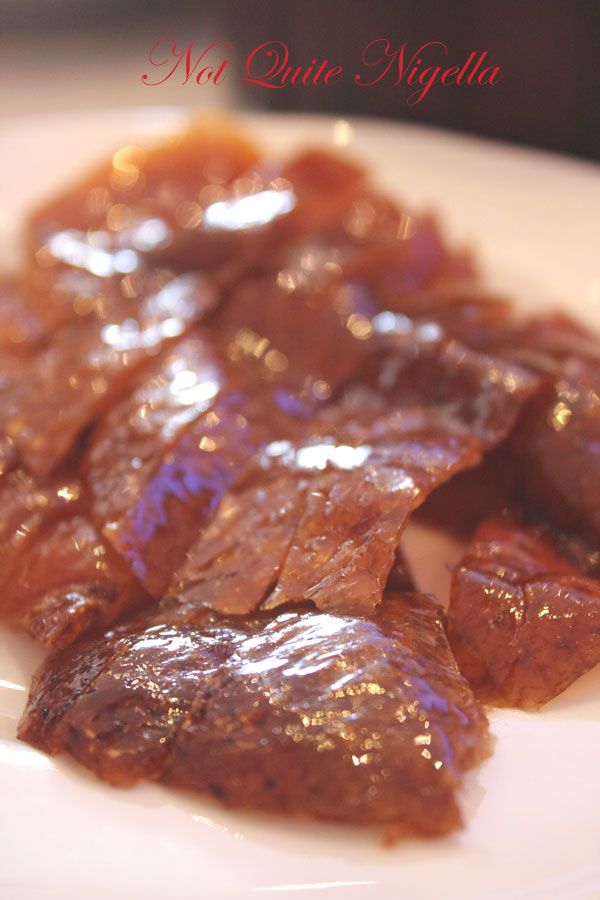 Plate of skin only 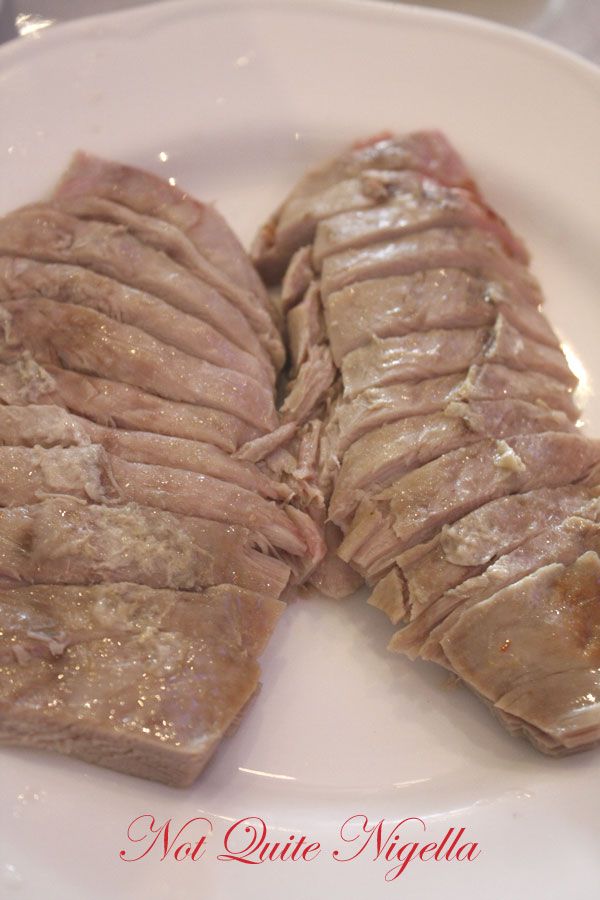 _Plate of meat only

Despite the fact that the restaurant is called Peking Duck restaurant, the dish is called Beijing Duck on the wall poster ($68). What we get is three plates of the duck: skin only; meat only and a dish of meat with skin on the edge. We also receive the condiments: some hoi sin sauce, cucumber and shredded shallots, a generous serve of hot pancakes plus some more unusual accompaniments like garlic sauce, strawberry jam and white sugar. We try variations on the pancakes-the strawberry jam and white sugar is just plain weird and wrong for my taste buds and of course the best tasting one is the pancakes with a small amount of meat but a lot of skin, cucumber, shallot and hoi sin. The meat only plate is left untouched by most so we mix it up with the spicy sauce from the pork belly dish and voila, it finally has enough meat in it! 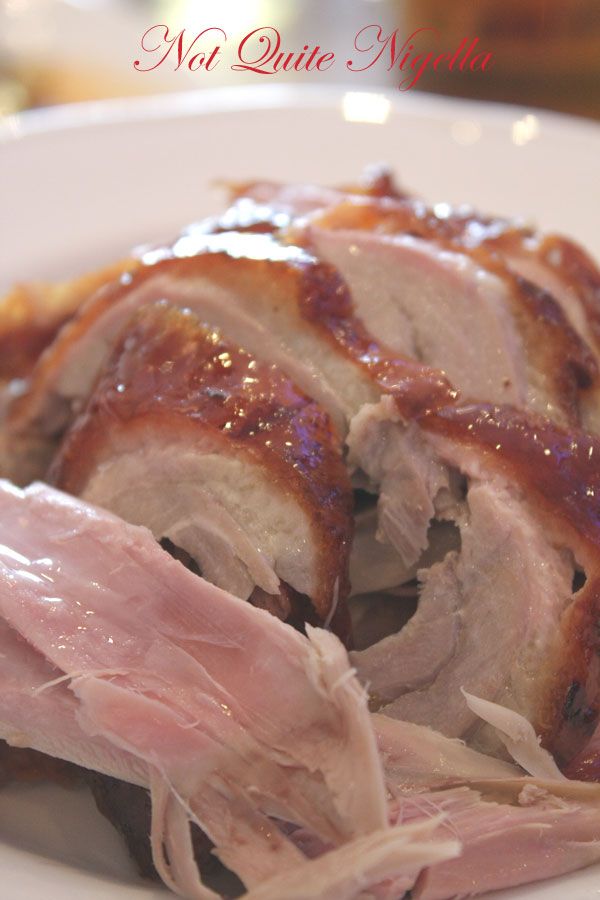 Plate of meat and skin 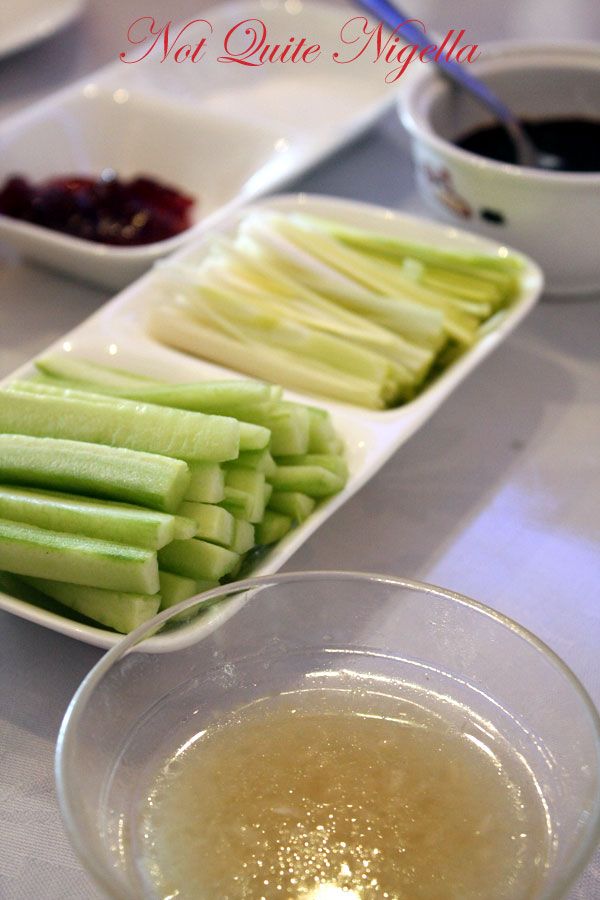 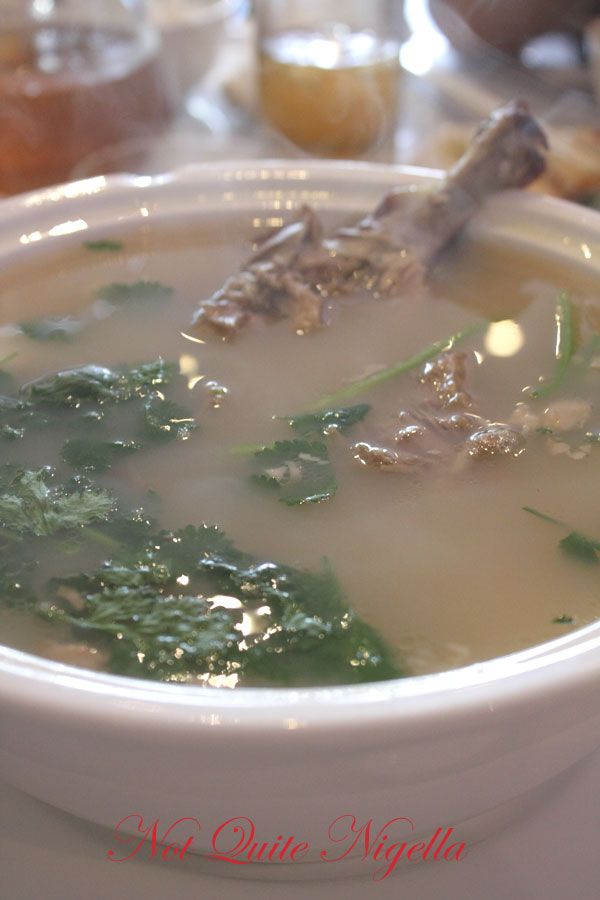 The second course is the slightly milky broth cooked with the bones and some meat from the duck. It's not particularly flavoursome, bordering on bland so I leave this in anticipation of the upcoming dessert. 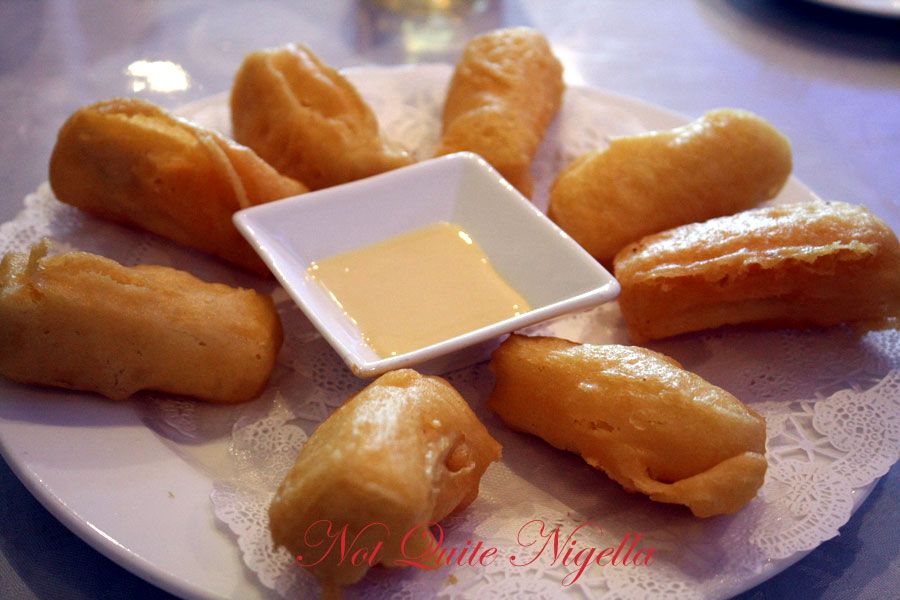 The best dish surprisingly is the dessert. Something that we ordered mainly for curiousity value and because the waiter wasn't able to convey what was in it turns out to be 8 deep fried logs of a wobbly creme brulee custard coated with the crunchiest batter and accompanied with sweetened condensed milk. Yes my eyes light up again at the sight of sweetened condensed milk. The logs are light and crispy and light golden fried, with a soft perfect creme brulee custard center and dipped into the milk, I think I've been transported to heaven. We have to ask for more milk of course as the serve provided is tiny. 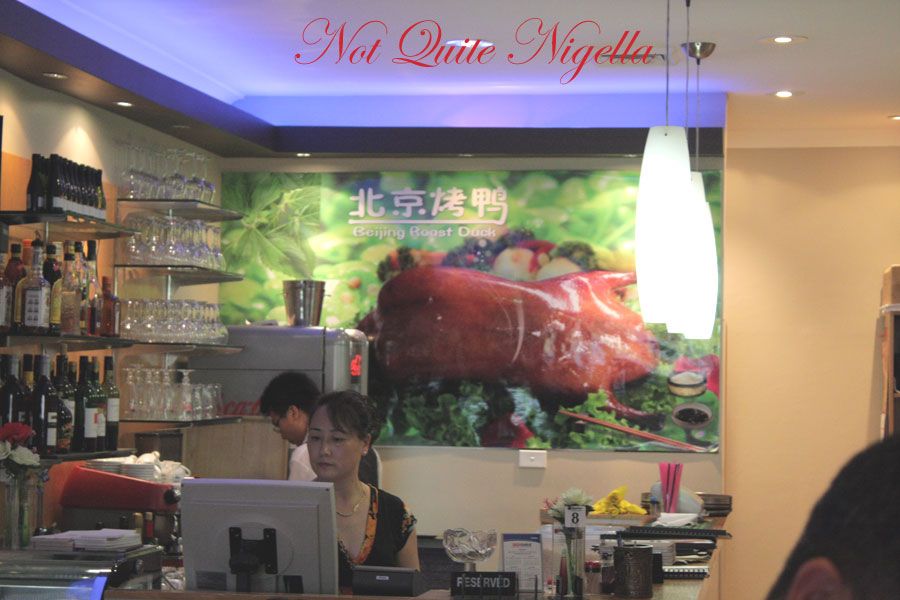 Service throughout the night is largely absent and absent minded - we have to ask for more bowls for the soup and requests for things have to be repeated several times. They're also not very subtle about wanting our table and present us with the bill mid-dessert. 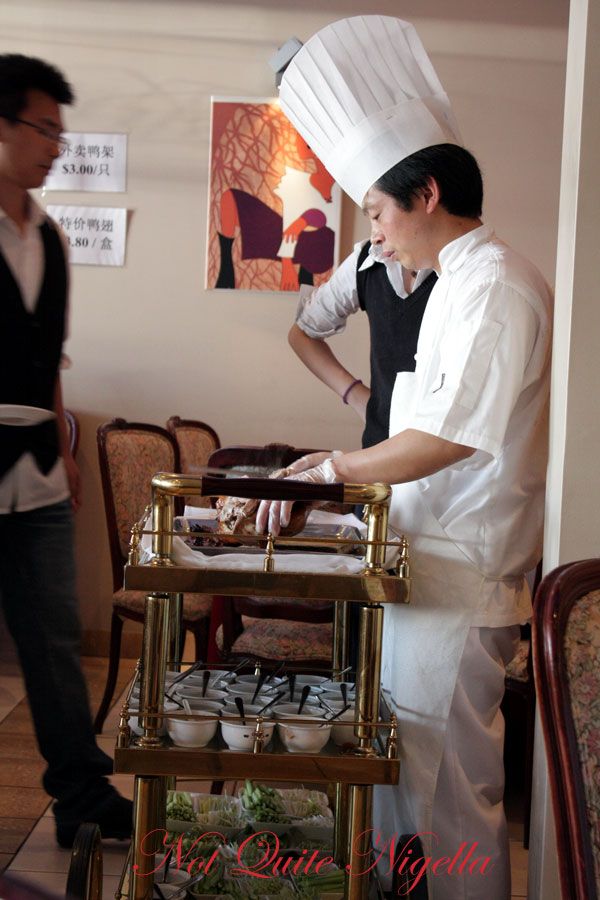 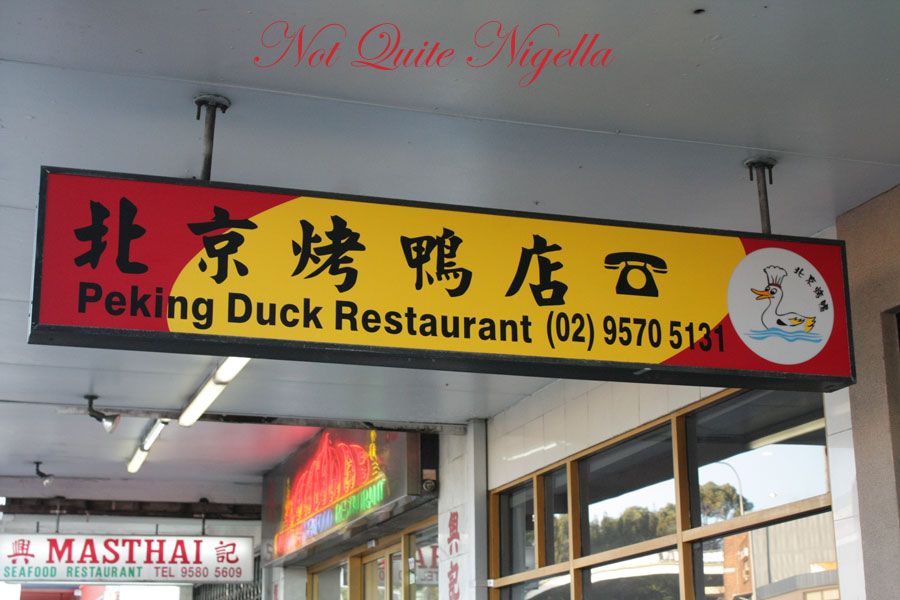