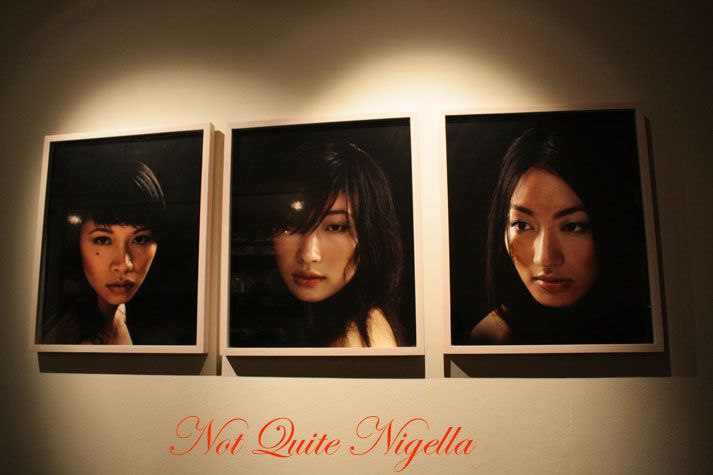 A name is very important. It can make or break a person or an item. Think of the person who was called Tony Esticles, Hugh Jarse or Vijay Jay. So when Christie, Y and I are seated at the swish dark wood panelled and red accented Spice Temple, Neil Perry's latest venture, and we're staring at the extremely tempting sounding yet unusually named dishes we realise we have a big task ahead choosing dishes. Spice Temple has enjoyed mostly positive reviews but with some sceptics, but we're interested in trying Neil Perry's take on Chinese cuisine ourselves. If anything he seems to understand the basics of Chinese numerology where the number 8 is considered an especially lucky number - it's no coincidence that the restaurant phone number is 8078 1888. 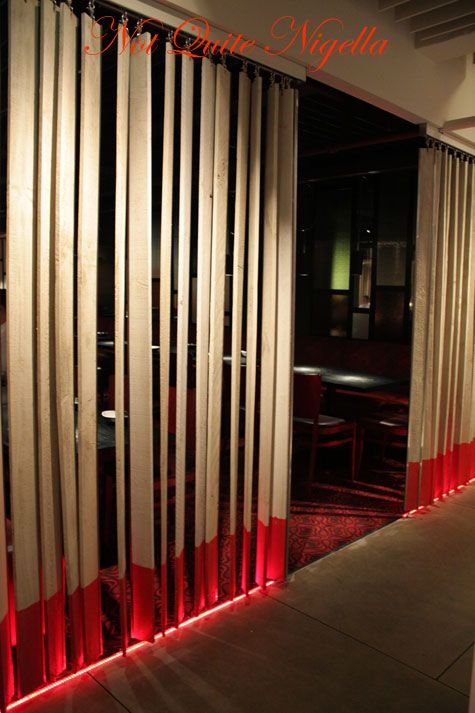 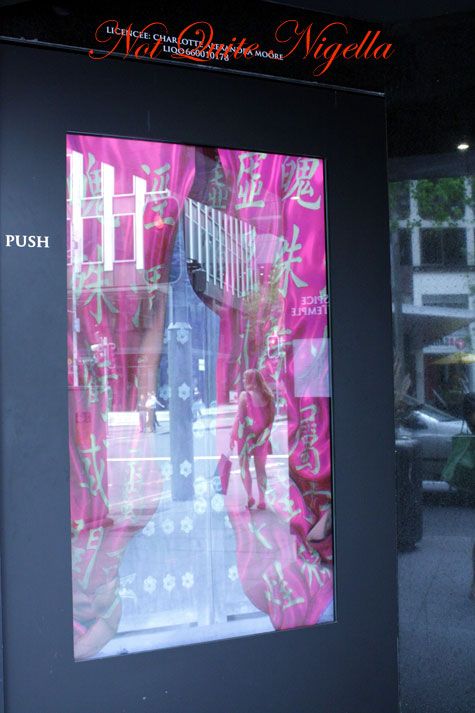 It's a strange sort of entrance downstairs to Spice Temple. A subtly signposted door which, at times, shows a computerised image of a door with curtains blowing. However when Christie and I get there it looks like a regular door. We accidentally go upstairs to his Rockpool Bar and Grill (and there's no sign of any sort of recession there, it is full to the brim) and when we go down the windy stairs to the restaurant we're greeted with a serene, glowing scene. Panels of rough hewn wood are placed to resemble bamboo and there are photos of stunning asian women on the wall dotted throughout the room. Their presence carries through to the menu and the cocktails, a heady and inviting mix of flavours with home made syrups sound intriguing and are named after creatures of the Chinese Horoscope. 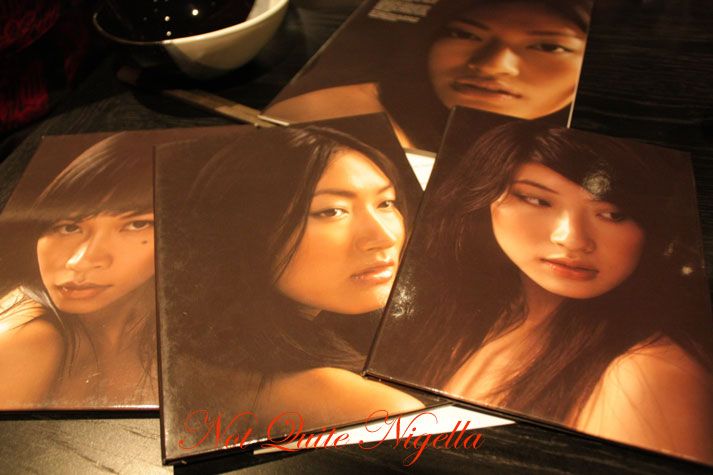 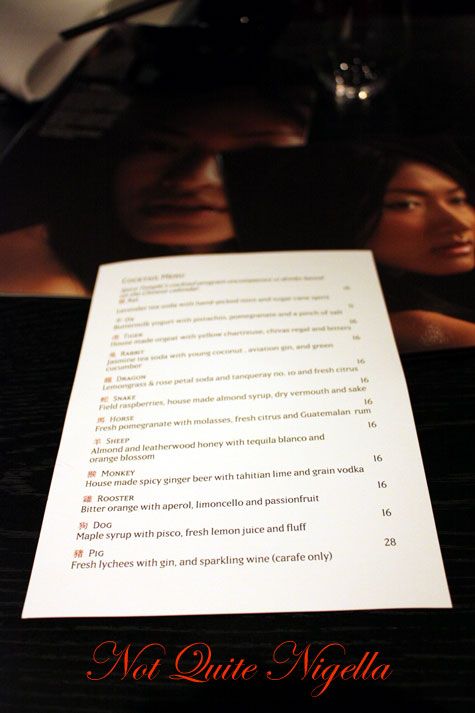 The menu features items with intriguing names such as "Three shot chicken", Beef fillet in fire water" and "Hot and numbing white cut chicken". The hotter menu items are in red typeface and we ask the waitress what she recommends and she's knowledgeable, polite and friendly. Interestingly, they are the dishes that we were leaning towards so our task is over. We choose 1 item from the "red" i.e. hot range and the rest from a mix of items. Our waitress does warn us that the fish we have chosen because of the name "Fish Drowned in dried chili and Sichuan peppercorns" is actually one of the hottest items on the menu. We consider ourselves warned! 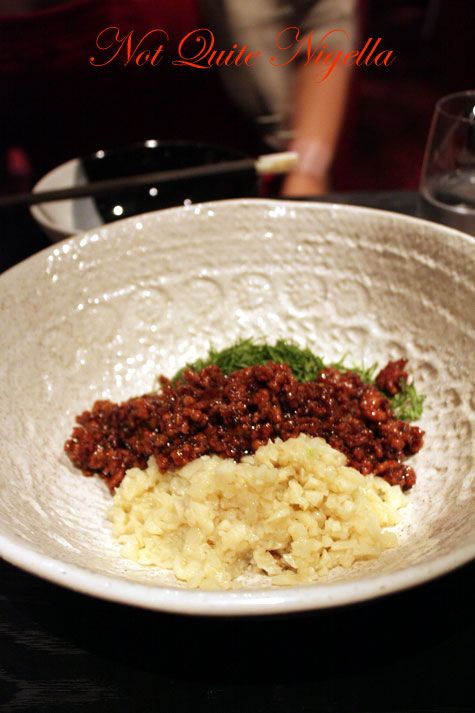 Steamed Eggplant with three flavours: garlic, coriander and sweet pork prior to being mixed $18

We're not kept waiting for long, despite the fairly full restaurant. It's a Thursday lunchtime and there are all sorts of groups, mainly male business types enjoying the food. Our first dish arrives and it's in three sections. There is the pork mince, the eggplant in soft slices, chopped coriander and the garlic, yes the garlic is the pale plentifully doled out item on the plate. 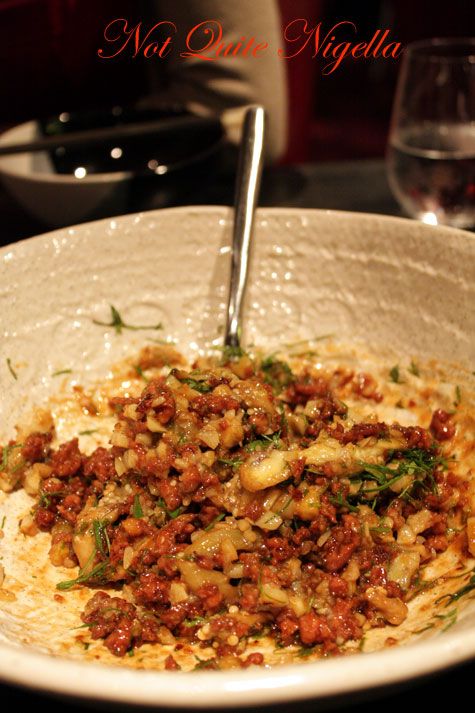 And before you think that we're off to battle rogue Vampires in our very own Twilight moment, they assure us that the garlic has been blanched three times so that it is relatively mild. I hope so as I have a trip to the dentist later that afternoon. It's ambrosial and very strongly flavoured, so much so that we ask for our rice at the same time to help balance out the strong flavour. The pork mince is reminiscent of the Mapo Tofu pork mince with strong black bean tones. 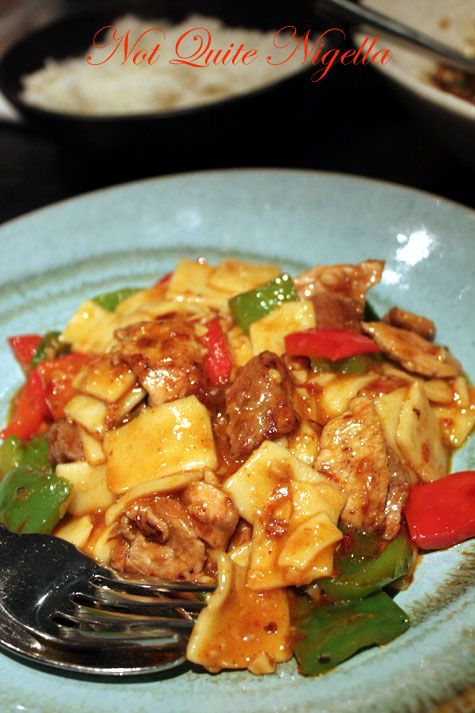 Our second dish, from the Northern Chinese region is the Cats Ears Noodles made from potato and whilst being square shaped, they are indeed reminiscent of a flat spongy gnocchi. They're silky smooth and delicious and the pork is tender and flavourful. I had a similar dish at Uighur Cuisine and whilst it was huge, spicy and filling, this one is more refined. 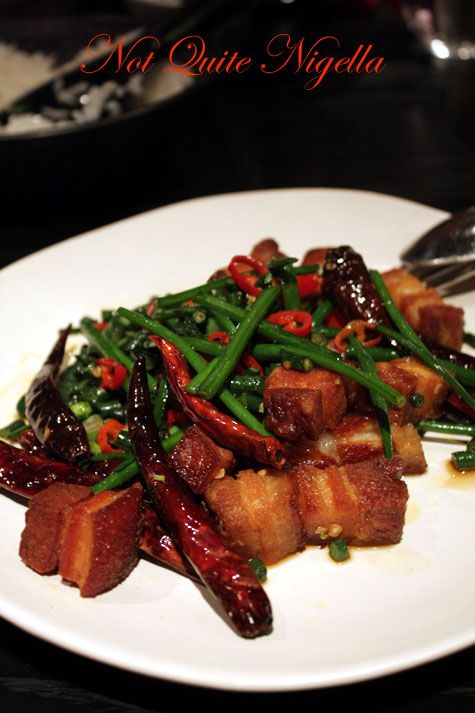 Our third dish, and by now I am feeling impending satiety, is the_ _Hunan Style crispy pork belly with fresh and dried chillies and mushroom soy with little cubes of pork belly. There are some batons of garlic chives and dried chillies on top (the chilies are fairly mild and delicious to chew on) and underneath there are lots of finely chopped garlic chives. The pork is lovely and soft although after too many pieces it can be a touch dry and the tiny garlic chives bits are a little difficult to pick up with chopsticks so they get largely left behind. 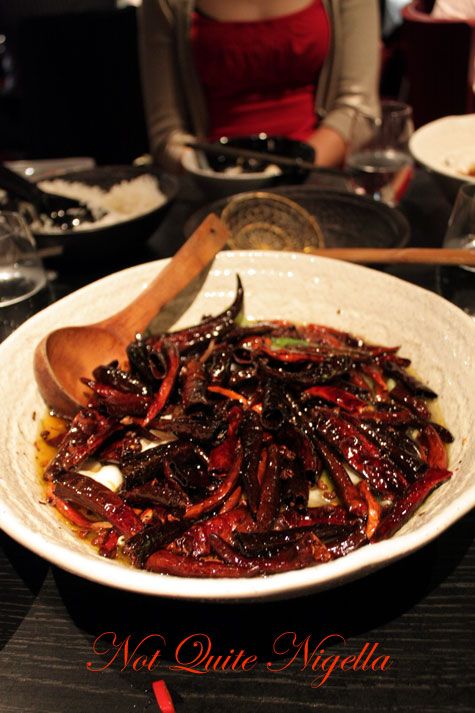 The last dish, the Fish Drowned in dried chili and Sichuan peppercorns arrives in a huge bowl. All we can see is literally a sea of those dried chillies. There are oodles of them in fact. Our waitress offers to take some out for us and we let her know that we can do it ourselves as I wanted to capture how many chillies there were. We spent some time fishing out the chillies and Sichuan peppercorns, of which there are many, a whole bowlful's worth, until we get to the fish. 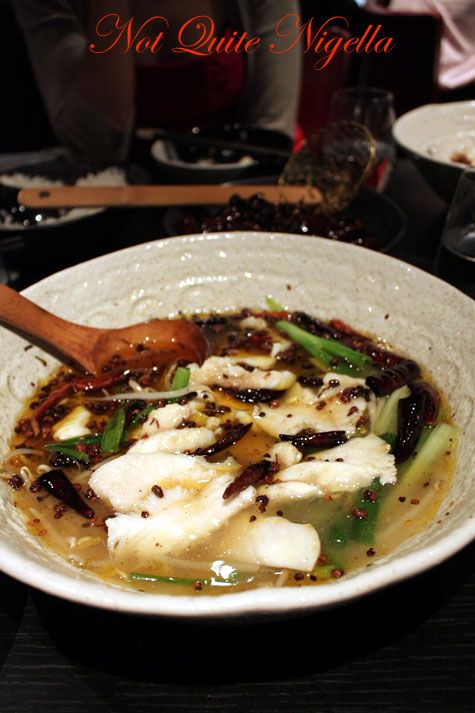 It's sitting in a soup that is very light in flavour and we take a piece of fish, cognizant of the warning we were given. Gingerly we take a bite expecting an extreme chili hit but...nothing. An ever so slight tingle from the peppercorns but we're certainly not the fire breathing dragons we expected to be. In fact if anything it's quite bland, particuarly when preceded with the other flavoursome dishes. It's mostly left behind although Y likes the fish. 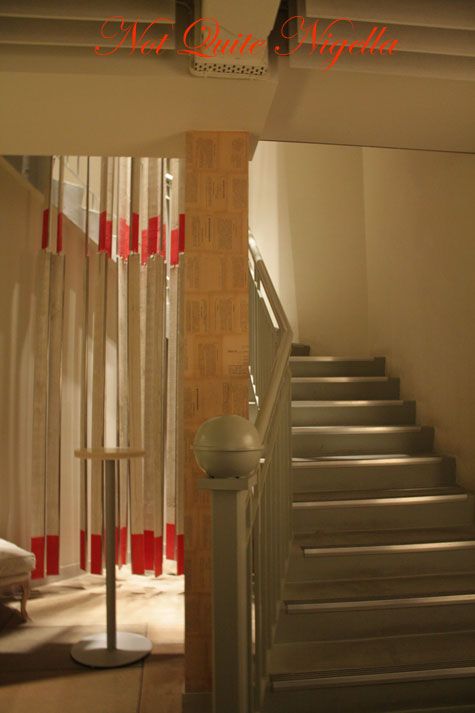 Four dishes for three girls is probably a bit too ambitious but we were amazed at the serving sizes - they're indeed generous so we all make mental notes to take our menfolk, happy in the knowledge that they won't starve. And if you can figure out how the toilet locks work, you're smarter than the three of us!