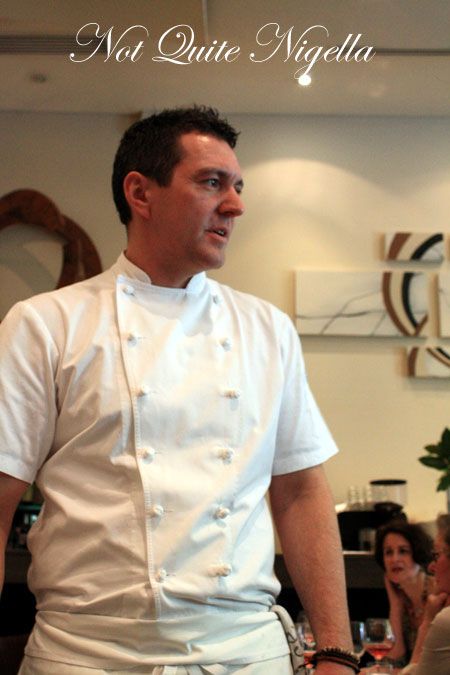 The recent World Chef Showcase was exciting for me for a few reasons. One if them was getting to meet Justin North, the chef and owner of Bécasse restaurant (along with Plan B, Etch and Le Grand Cafe) and the SMH 2009 Chef of the Year. When we got to talking after the show he mentioned the Producer's lunches assuming that I had been invited but had been too busy to come along. Not so I said and Justin promised to ensure that I'd be on the list for a future Producer's lunch, an initiative where Justin hosts media and other guests and introduces them to the actual producers that supply the restaurant with their special produce. And sure enough, a couple of days later, I received a phone call from Justin inviting me to a very special one - one with Carlos Petrini as the guest. 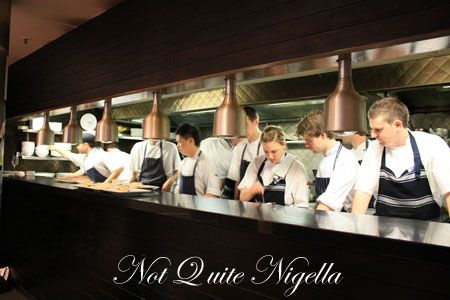 Carlos Petrini started the Slow Food Movement which started in 1989 as a way of consciously combating fast food and life and preserve a quality of life in response to peoples waning interest in the food they eat and its origins and it also looks at how our food choices impact the rest of the world. He visited Sydney to be part of the Sydney International Food Festival and held a talk just a few days before at the Opera House. 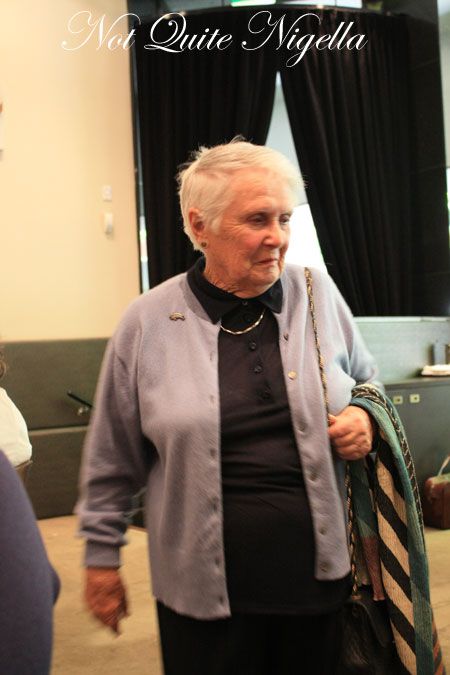 The crowd is full of media including Helen Greenwood, Lyndey Milan, Indira Naidoo as well as the guest of honour Carlos and his table of guests. Next to him is an interpreter as he does not speak English. Smooth voiced Simon Marnie from ABC 702 is hosting and just as we're about to start, the 85 year old Margaret Fulton (and shameless flirt who told the crowd when he'd won Chef of the Year that she'd rather see North undressed) arrives, sharp as a tack. Later, when Simon can't immediately remember the name of the Australian of the Year she names "Tim Flannery" without missing a beat. Justin in his chef's whites introduces us to everyone and gives us a quick overview of the Producer's Lunch concept as well as the canapes, breads and amuse bouches. 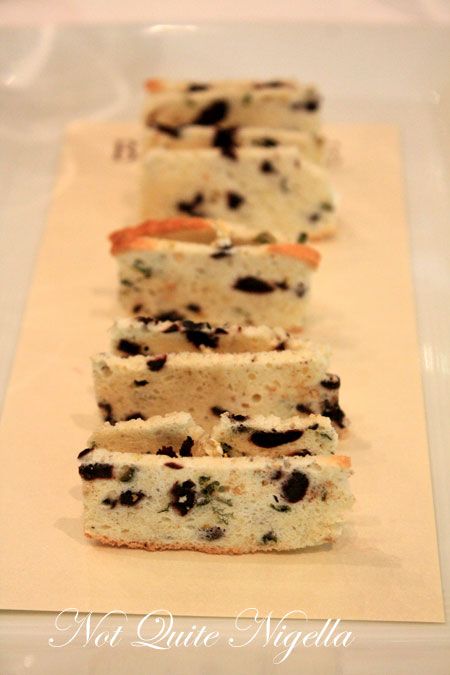 We start with a canape - what looks like a delicate biscotti sandwich is one speckled with black olive and lemon thyme with a goat's curd sandwiching it together. The crunchy biscotti combined with the salty goat's curd makes my tastebuds rather excited. 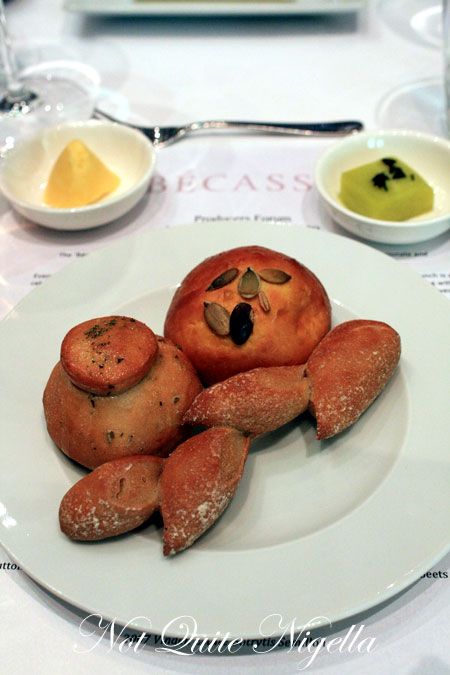 Justin tells us about the bread which is baked every day when the baker arrives at 2am. They are still warm which is always good in my books and the pumpkin brioche is sweet, buttery and with a centre of smooth pumpkin. The stout epi is a bit hard for my taste but the garlic and rosemary auverge is gorgeous and heady in rosemary. Served alongside it is butter or an olive oil solid square - I recall seeing him make something similar at the World Chef Showcase using a product called Glice. 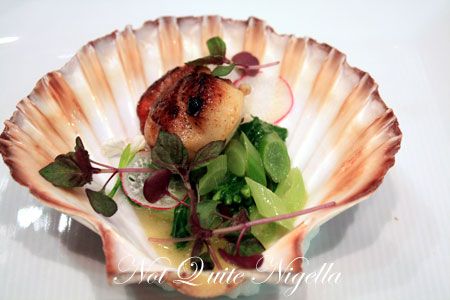 The Spring Bay scallop Amuse bouche is next and it is crispy on the outside and served with radish stems and paper thin slices of radishes. There's said to be green chilli but it must be quite light as I can't discern it.

Phil Lamb from Spring Bay seafoods gets up to give us a talk and speaks about aquaculture and the impact of it on his business and industry. He explains that mussels are grown on a hairy rope in hatcheries and particularly lend themselves to aquaculture. They harvest over 10,000 tonnes a year of organic mussels and they start with 100 million and hope to renew 10 million. With scallops, they harvest 20-30 million (20% of what they put out) and the area of Spring Bay in Tasmania is said to be a nutrient rich area with deep waters. Host Simon thoroughly recommends the curried scallop soup in this area. 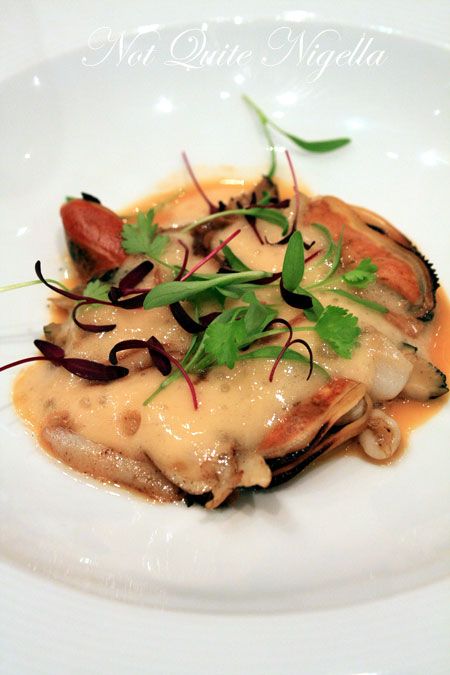 Justin explains that his bouillabaisse mousseline was inspired by his stint at Pierre Gagnaire. This dish, it has to be said is the sea in  bowl, the Spring Bay Mussels are full of that distinct mussel taste, the shaved abalone and braised periwinkles provide more of the sea and the sea infused mousseline and jelly round it out. I'm convinced this is what mermaids eat. 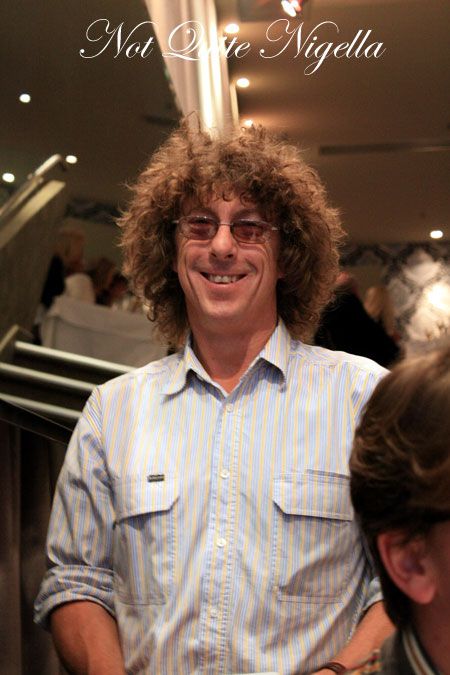 The friendly, shaggy haired Rob Lennon from Gundoee Organics speaks next. Theirs is a 2 year relationship and Becasse buys in the animals whole. The farm produces 9 cattle a month and they take 2-3 and break them down with the chefs and apprentices getting to see how this is done and Justin makes a conscious effort to pass on the learning for this so when they open their restaurants they do the same. Sirloin and rump are then dry aged for 4-8 weeks.

Justin tells us that the cheaper cuts such as the topside and silverside are then made into their famous Plan B Wagyu burgers along with the beef knuckle and bolar blades. Some of these cuts are too lean to braise so they mince them up and then add wagyu fat from around the brisket to them to moisten them. 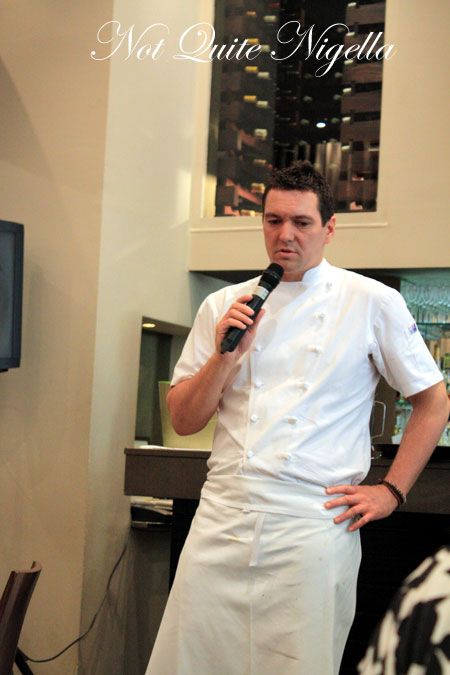 Grass feed beef is one that has taken time to catch on and for chefs to get used to. As it's leaner than grain fed, it needs to be dry aged so that it's as tender as possible. Dry aging also intensifies the flavour as the water precipitates. The farm has about 450 cows in total and produces about 120 carcasses a year. The cattle graze on native grasses which have been introduced into the area as they are more in sync with the conditions as well and Rob tells us that his kids can taste the difference between theirs and others, even when they are only 10 years old. 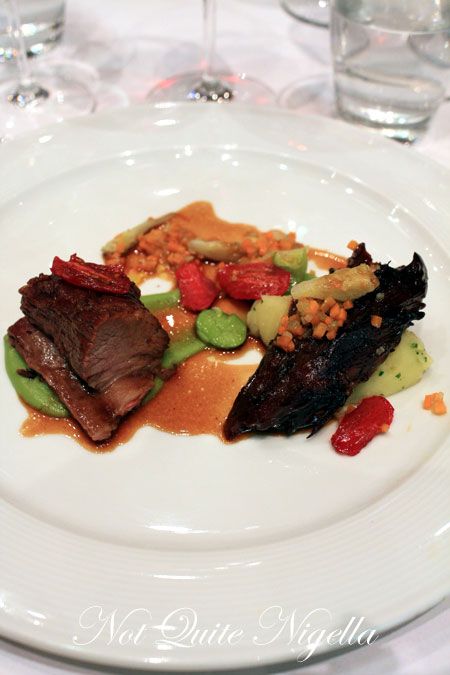 There are two parts to this dish and they both taste quite different due to the cut and the way that they're cooked. The rib is a firmer to slice whilst the osso bucco is tender due to the slow cooking process. They go well with the broad bean puree and crushed dutch cream potatoes. A special note has to be made of the sun dried tomatoes which are fantastic - we later learn from a curious diner who asked about them that they were dried and then smoked, giving them a fantastically full flavour. 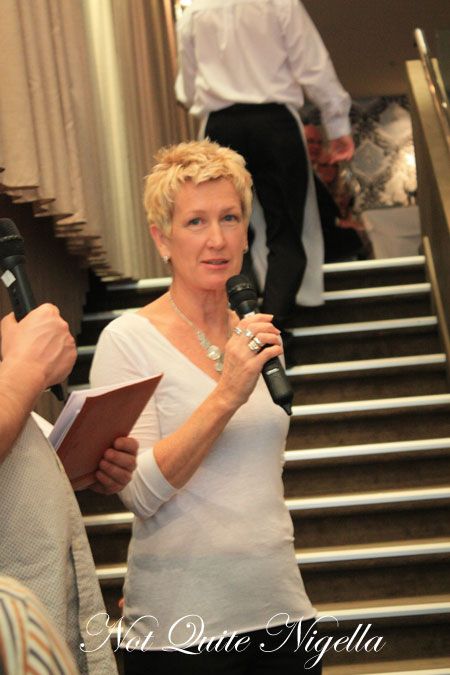 Lynne Tietzel from Australia on a Plate

Justin explains the devotion of the La Luna Holy Goat girls is such that they couldn't make it here to this lunch as the goats were kidding so Lynne Tietzel from Australia On A Plate gives us an overview of the operation at the Sutton Grange Organic Farm where Holy Goat La Luna cheese is produced. Carlos Petrini was particularly interested in this. They let the milk ripen for 24 hours and mix the evening and early morning curds and use a slow fermentation process. The curds are then hand ladled as they are fragile and they are never cut. At the farm there are 60 goats in total from the British Alpine and the Swiss Saanen breeds who are known for their potentially enormous milk yield. The one point that resonates with the crowd and particularly Carlos Petrini is something that Lynne says that one needs to understand one's own limitations so that you can hold true to your ideology. And with that, a discussion on raw milk is started - a topic that is close to Petrini's heart. 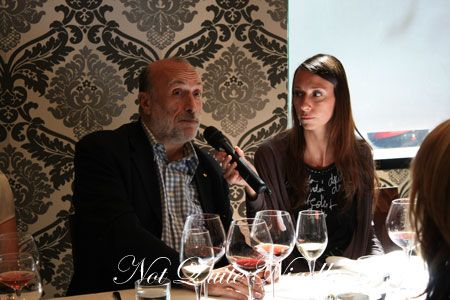 Through his translator he tells us that his Slow Food movement is based on community support and that raw milk is a right that he feels that producers should have. He tells us freedom is good until you step on the freedom of others and we need the right to choose and laws regarding cheese. He jokes that the law as it stands allowing French and Italian unpastereurised milk cheeses, it suggests that Italian or French bacteria is better. He suggests wine makers get behind the raw milk issue and asks them to consider if there were laws making pasteurisation of wine mandatory. 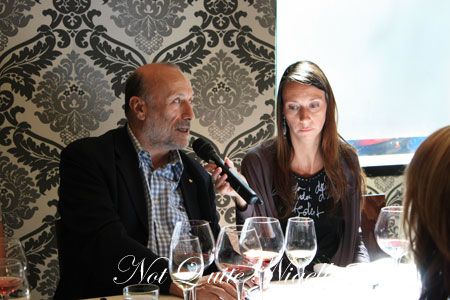 He then speaks of Rob whom he calls a young Bob Dylan (or more specifically "a better version of Bob Dylan") and praises his efforts. His dream? To come back here and sit down to a plate of white cheeses - some pasteurised and some non pasteurised. He asks that people sign a petition and that the first signature should be Margaret Fulton's. 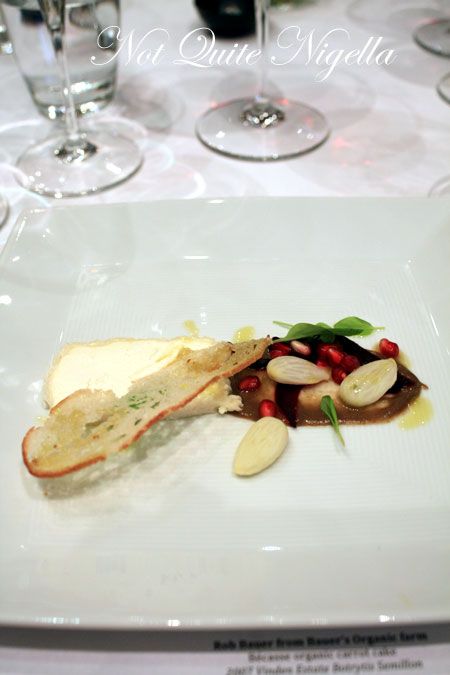 We try the cheese course which is  a rectangle of the multi award winning goat's cheese with a wafer thin cracker and sweet and salty caper and raison puree and sweet baby beets. The combination of sweet and salty plus the distinct goat's flavour is well balanced and wonderful. The Fresh Almonds are very interesting -  moist and almost like a fruit or vegetable it doesn't taste anything like a regular almond. It's very mild but with an unusual flavour that's hard to put a finger on. 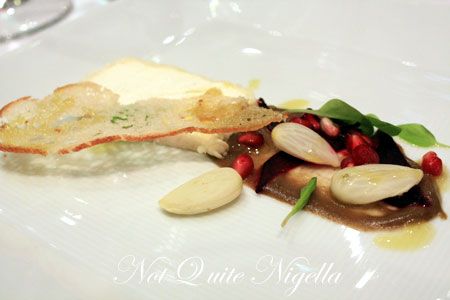 The last producer we hear from is Rob Bauer whose family were farming the area since the 1800s when they came over from Germany. What convinced him to start farming organically? Farmers dying he says simply. At first there was scepticism when he spoke of organic farming and he says that people would think he was mad "but now he's gone and I'm still here" he says to laughter. He tells us growing organically is hard but says that when you see how long Justin takes in preparing the food it doesn't seem so long after all. They have 1 crop a year which they rotate with a legume whilst others do 3 crops a year. His philosophy is "You're not as smart as nature" and explains that they are tested for 108 different chemicals (and passed for all of them). 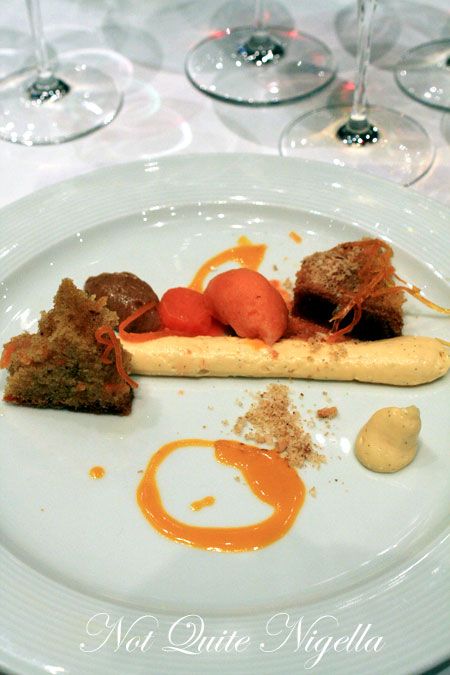 When you picture carrot cake you imagine a hunk of carrot cake which is all fine and good but you get the sneaking suspicion that the Becasse version won't be anything like this. It's two triangles of carrot cake soaked in carrot and drambuie, with piped cream cheese with vanilla and lemon, toasted walnut dust and served alongside carrot sorbet, frozen carrot jelly, candied carrot strings and  a delicious walnut mousseline which has a texture like ice cream which is made from ground up walnut and syrup in the Pacojet ice cream machine and finally finished with a carrot and olive oil emulsion. It's absolutely delicious and tastes almost like a walnut butter. The cream cheese, an essential for carrot cake is soft and this dish is plate licking worthy (that is, if I did such a thing ;) ). 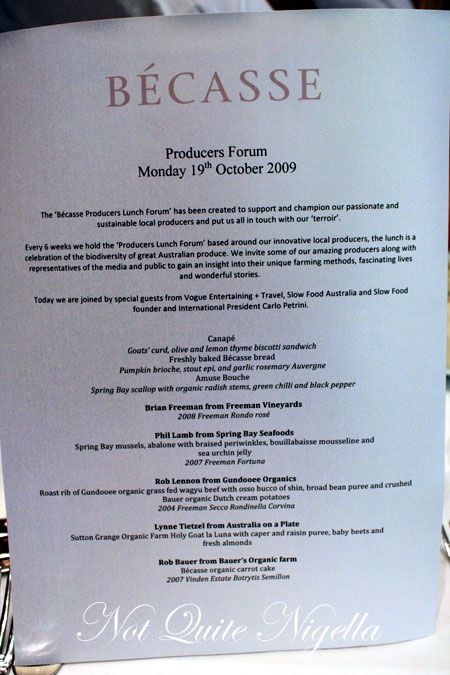 The lunch winds to a close and it's about 3.30pm. They usually finish around 2.30pm we are told but with the special guests and spirited conversation it has gone for a bit longer. But I suppose that's the point of Slow Food?

NQN dined as a guest of Becasse.