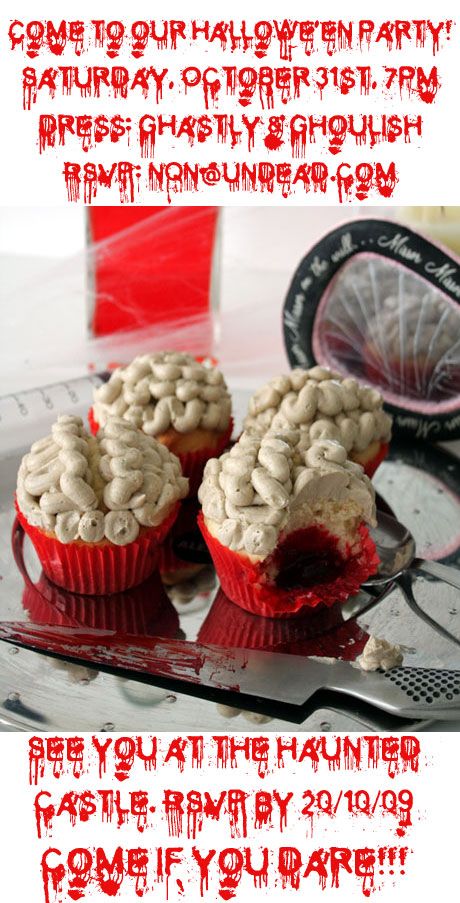 Hello my pretties! Take my (severed) hand and let me give you a peek into my annual Halloween party. It's an event that gets me going throughout the year. This month was particularly busy with the Sydney International Food Festival and before I knew it, it was the 20th of October and I hadn't even sorted out my costume. 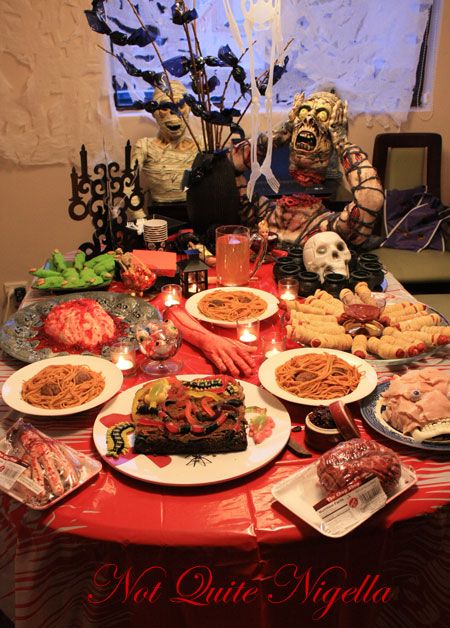 Luckily I had been planning this party even before last year's finished (yes I'm an obsessive kind of person, can you tell?) and I had my menu sorted. I wanted to make different things from last year and I wanted it to be even more grisly than last year. I waited and waited and waited for my oven. It was about a month late and was on the way to me from the nice people at LG. It finally arrived and I can already see that she (and it is a she no doubt) is also something that loves dramatic entrances so we'll get along just fine. I was set for my baking duties and so I had to get my costume together. 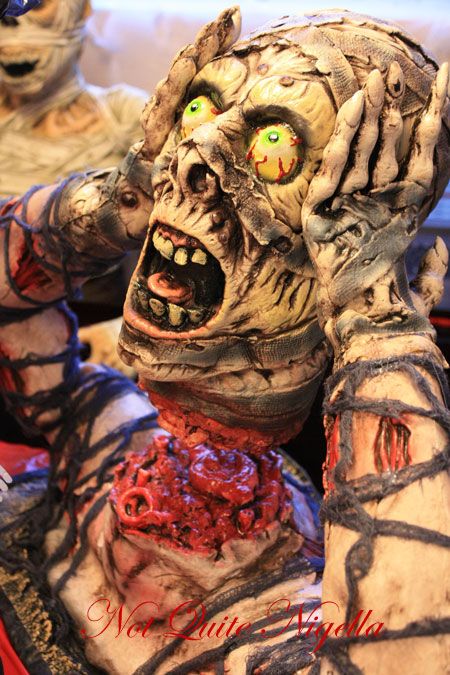 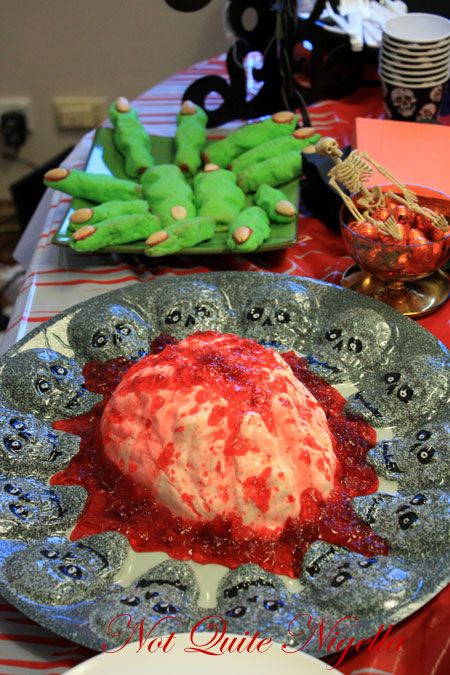 I am not one for sewing. In fact the only craft I can muster up is really cooking. So I chose to buy my costume and there was one I had my heart set on, the Queen of Hearts from Alice in Wonderland (I even had the tiara ready for it). Now that I had my outfit sorted, I needed to turn my attention to the decorations. Places were selling out of their Halloween goodies and whenever I'd walk into a shop, there would be a gaggle of people amongst the Halloween section with adults and kids alike grabbing costumes and decorations. 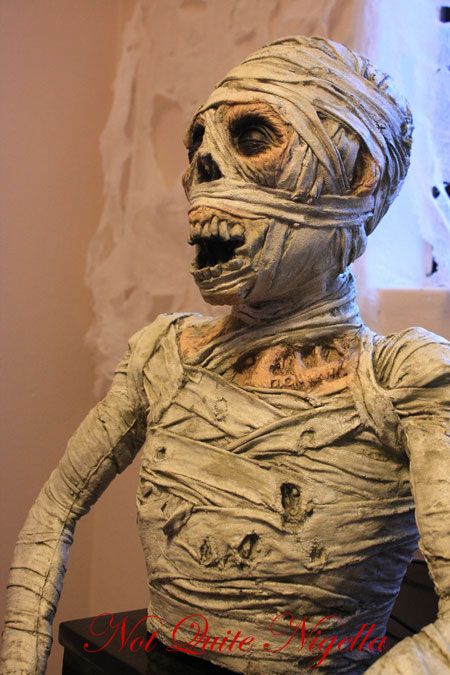 I wanted to go more ghoulish and squeamish this year so I went with Donna the Dead, the moaning sensor activated animated moaning head. I picked up my charming severed head from The Party People in Sans Souci and discovered a treasure trove of ghoulish goodies. We got to chatting and they agreed to lend me some props for the party including these two charming mummies and a faux bloody brain and severed hand! Mr NQN dressed up as a surgeon gone psychotic and answered the door holding the body parts (he was originally to go as Hannibal Lecter holding a bottle of chianti, fava beans and a liver). 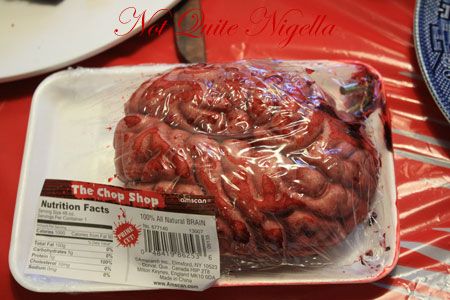 But enough dithering, let me show you the food which is always one of the most important parts to a celebration aside from the company! 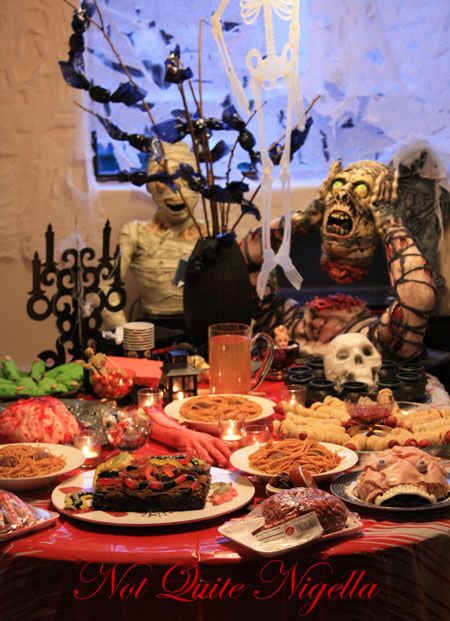 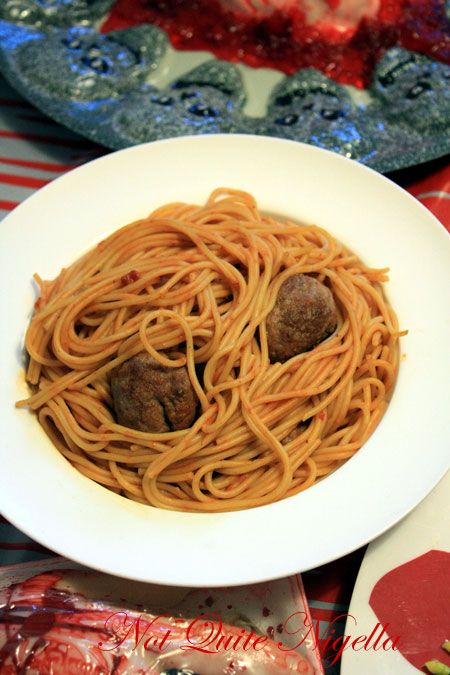 Mummies seem to be the order of the day here (see Mummy Hot Dogs) and when I saw a picture of this in Claire Crespo's The Secret Life of Food, I knew this was a definite winner. It's easy too and can be done with pre bought sauce and pasta (and you'd better believe I used pre bought with the amount of prep I had to do).

Step 1 - Boil the spaghetti in plenty of salted water as directed. In the meantime, shape the sausage meat into balls with 2 large balls for the eyes and some tiny ones to hide under the spaghetti. Fry the meatballs until cooked through (the larger ones will take longer to cook than the smaller ones).

Step 2 - Drain the spaghetti and toss with the pasta sauce. Place the spaghetti in a bowl and hide the little meatballs underneath so that they can't be seen from the top. Place the two large eyes on top and push them in a bit so they look like they're poking out - you may need to arrange the spaghetti so that it goes across where you are putting the eyes much like the mummy wrapping would. 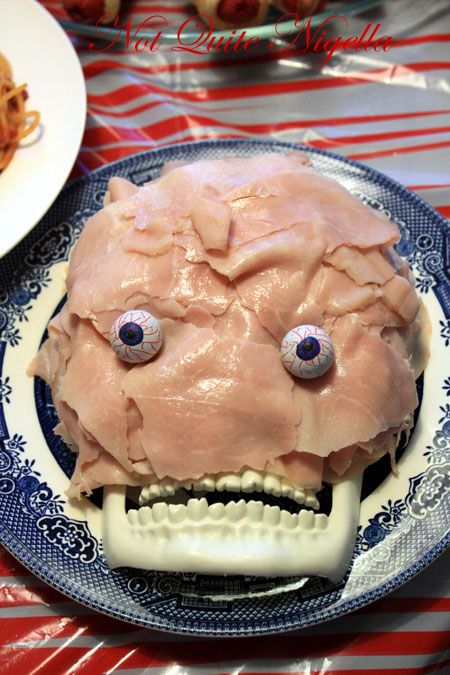 This started off its life as a pirate skull as I needed a skull base on which to make my flayed skin face. I simply bought 1/2 a kilo of shaved ham and arranged it on top of the skull and added some eyeballs and voila that was the simplest and easiest dish!

Step 1 - Arrange shaved ham in layers on top of the skull leaving the teeth exposed and pushing down indentations for eye sockets. Place eyeballs in sockets. 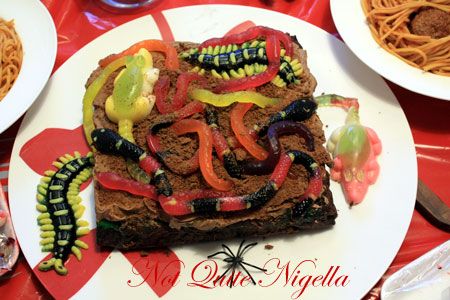 This started off it's life as Chocolate and Zucchini cake as it was part of the monthly column I was writing for Webchild. I found these fabulous creepy crawlies at Aldi (a place I find some surprisingly good stuff) and there were centipedes, rats and snakes in the mix. I could have done a regular chocolate cake but I knew that it would be even more gruesome with the green bits of zucchini in it. It called for the addition of chocolate to be sprinkled on top but I knew that the green Wilton Candy Chocolate Melts that Barbara sent me would be even better and make it look even mould like! Barbara is my American mum and an absolutely lovely blogger who sent me an awesome package of goodies including these melts. She tells me that I'm just like her daughter (my twin sister ;) ) who loves Wicked, Halloween and Harry Potter! 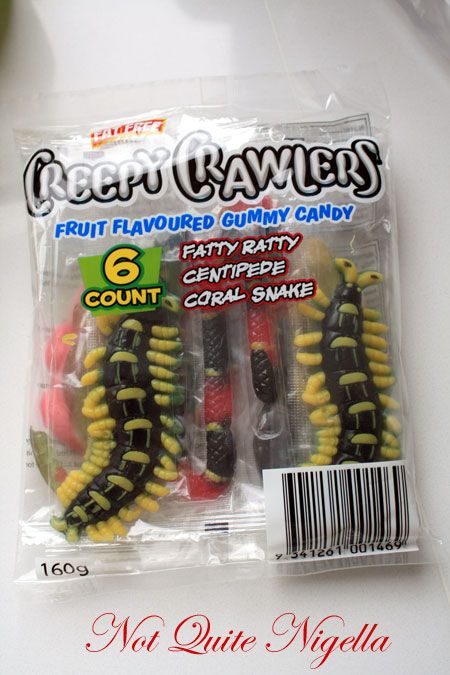 Step 1 - Preheat the oven to 160c/325F and line a square tin with baking paper. Sift the flours, cocoa, cinnamon, bi carb and baking powder into a large bowl and set aside.

Step 2 - In the bowl of an electric mixer, beat butter and sugar until light and fluffy. Add eggs one at a time until combined.

Step 3 - Alternately add the sifted dry ingredients and then the milk in 2-3 lots until combined. Do not overmix. Add in grated zucchini. 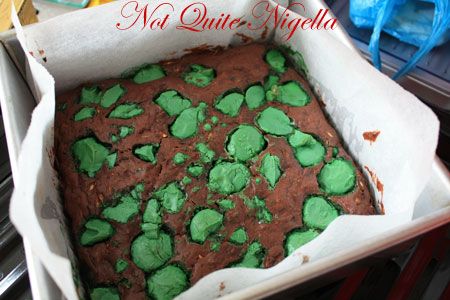 Gotta love Halloween, the time when you want your food to look mouldy!

Step 4 - Pour into the lined cake tin and sprinkle chocolate chips on top. Bake for 40 minutes and check for doneness by inserting a skewer in the centre.

Step 2 - Add the golden syrup to the cooled chocolate mixture, followed by the sour cream and vanilla and then when all this is combined whisk in the sieved icing sugar. Or just pour this mixture down the funnel of the food processor on to the icing sugar, with the motor running.

Step 3 - When youve done, you may need to add a little boiling water  say a teaspoon or so  or indeed some more icing sugar: it depends on whether you need the icing to be runnier or thicker; or indeed it may be right as it is. It should be liquid enough to coat easily, but thick enough not to drip off.

Step 1 - Spread sour cream frosting on top of cold cake. Make it nice and thick. Then top with "dirt" chocolate biscuit crumbs. Arrange creepy crawlies so that they look like they're burying out of the dirt. 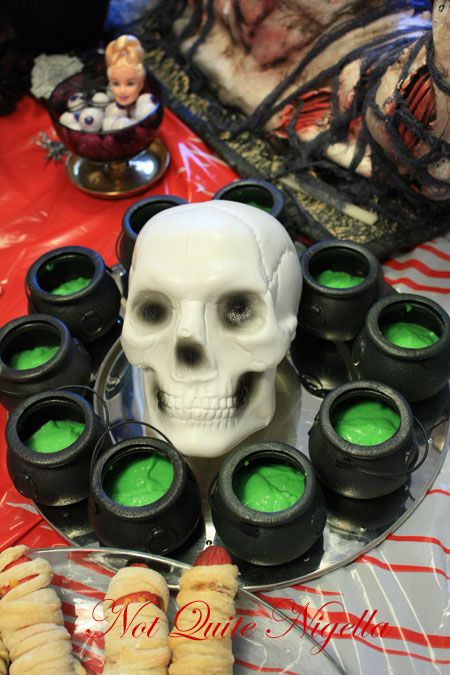 Notquite as gruesome or unappealing as it sounds, this is simply a white chocolate custard pudding using the green white chocolate candy melts that Barbara sent me. Of course you could use white chocolate and green food colouring which is just as easy. Just know that serving this in mini cauldrons is quite necessary for the whole effect!

Step 1 - In a small saucepan, place sugar, chocolate, cream and milk and heat until almost boiling. Then add beaten egg yolks and keep whisking until chocolate has melted. Reduce the heat to low medium and ensure that the mixture is not boiling. Whisk in egg yolks and keep whisking until mixture has thickened to a custard consistency. Place cling wrap directly on top of custard and cool. Serve in cauldrons (haha obviously!). 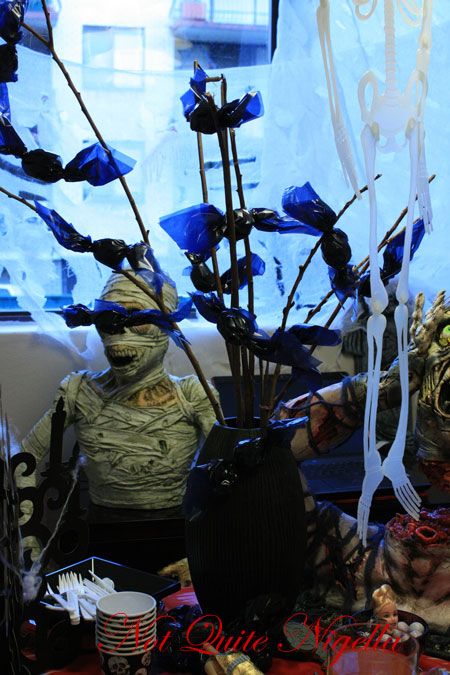 I made these as I was sent some boxes of Rondnoirs for the Tobie Puttock Dinner of Discovery. As soon as I saw them I knew I wanted to incorporate them into my party. Little did I realise that Mr NQN was a huge fan of these and ate my whole supply so they sent me some more which I promptly hid (near the cleaning products - somewhere where I knoq he never ventures!). They're fiddly though and tying them up in the branches using invisible thread is a tad tedious and if I were to do it again, I'd perhaps glue them to a Halloween background. 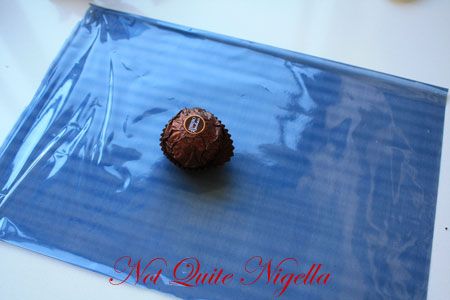 Step 1 - Unwrap the cellophane. It usually comes folded in rectangles. Keep them in the rectangular shape but you want a connected double layer of cellophane. Place the Rondnoir in the centre and fold the cellophane around it as shown so that you end up with two "wings" and a ball in the centre. Secure each twist with a peg. 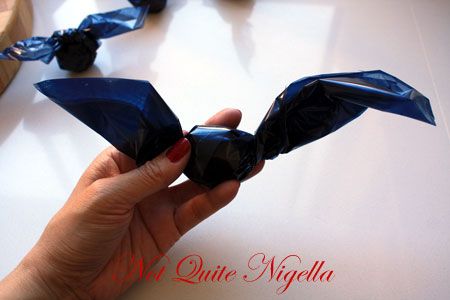 Step 2 - Cut a piece of yarn and tie each twist and remove the pegs. Now adjust the cellophane so that it is more bat wing like. I realise that sounds rather vague but it can be done with some playing around and the more you do it, the easier it will be. Cut out a scallop shape at the bottom of the "wings". Place in a bowl or if you can find them, on branches suspended with fishing wire. 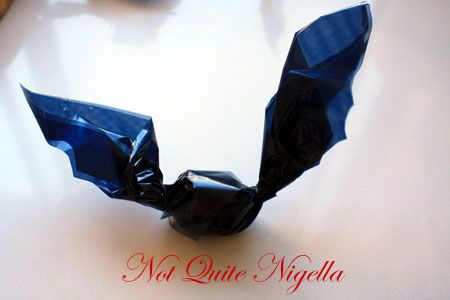 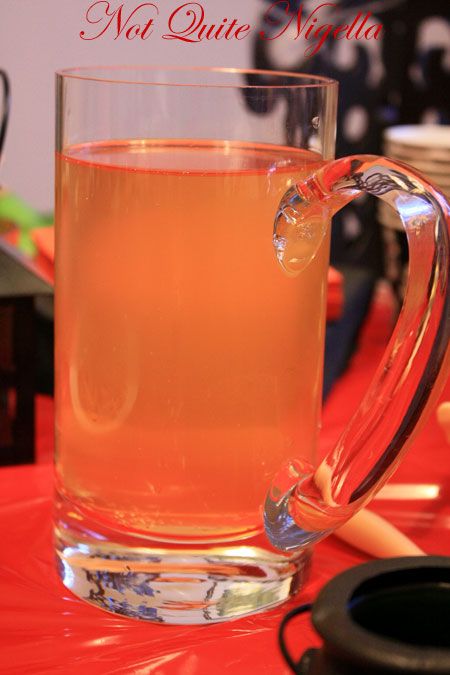 I based this recipe from Alexandra from Chefspiration who made Butterbeer to commemorate the new Harry Potter movie. I wasn't able to find butterscotch syrup so I bought a vanilla syrup and used apricot nectar to give it the right colour.

Step 1 - Mix all parts together and serve cold preferably in beer tankards. 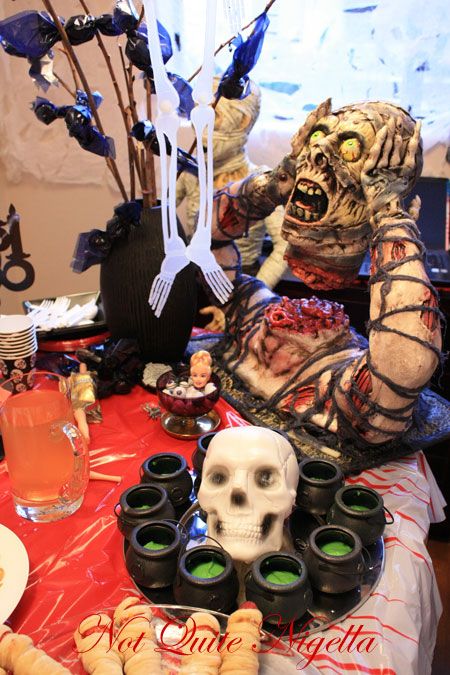 So tell me Dear Reader, what did you do this Halloween? Do you celeberate it?