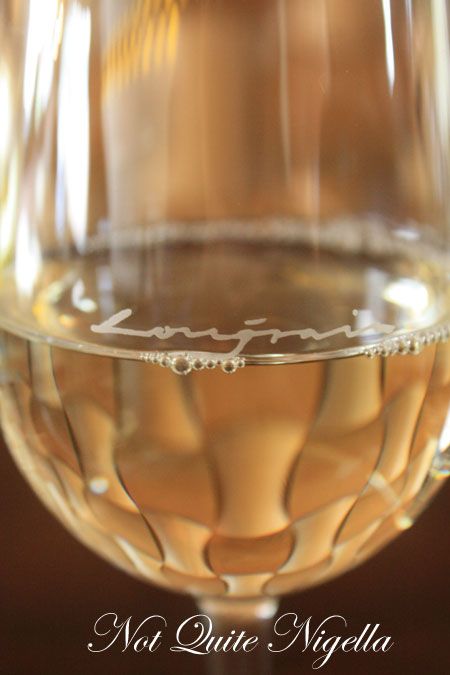 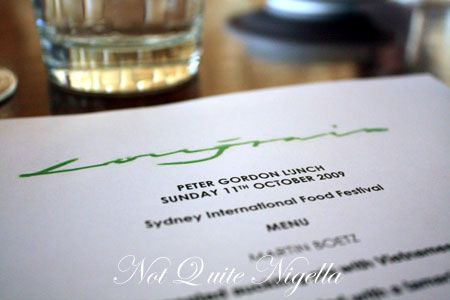 Or I could subtitle this story as "Mr NQN's favourite restaurant meal" such was his adoration for the food served to us this day.

" Look, he's actually cooking here!" I grab Mr NQN's arm when I see the familiar curly grey flecked hair of New Zealand export to London Peter Gordon. I mean I knew this was one of his lunches but he was well and truly cooking in the kitchen and not just here in name only. I had seen Peter speak at the World Chef Showcase only the day before and he had told us of his upbringing involving plastic corks and a pet lamb which they ate. It was a very much Hunter Gatherer lifestyle typical of NZ at the time. He recalls the first time he had an avocado and the pleasure they had eating it. 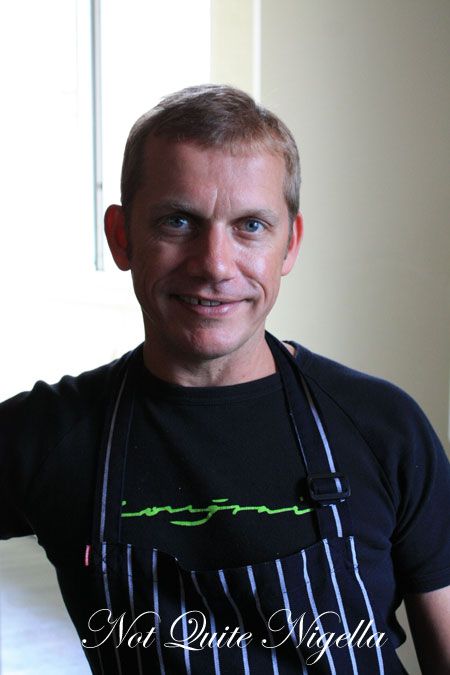 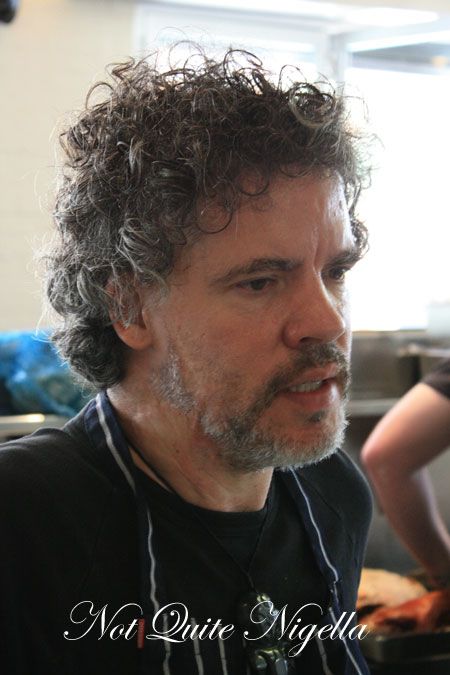 I have a quick chat to Peter before he gets started and he talks about the restaurant scene in London. I ask if the GFC has hit his restaurants, The Providores and Tapa Room and he says that it hasn't much at all, they're open for breakfast, lunch and dinner 7 days a week and on the ground floor there's the Tapa Room (named after the large traditional Rarotongan Tapa cloth made from block printed and hand beaten paper mulberry bark on the wall) and on the 1st floor there's The Providores restaurant. Even since the GFC, in a city as badly hit as London, they're busier than usual. And this is the man who owned The Sugar Club who Calvin Klein said was his favourite restaurant yet he had never visited and who made headlines when they turned Madonna away. 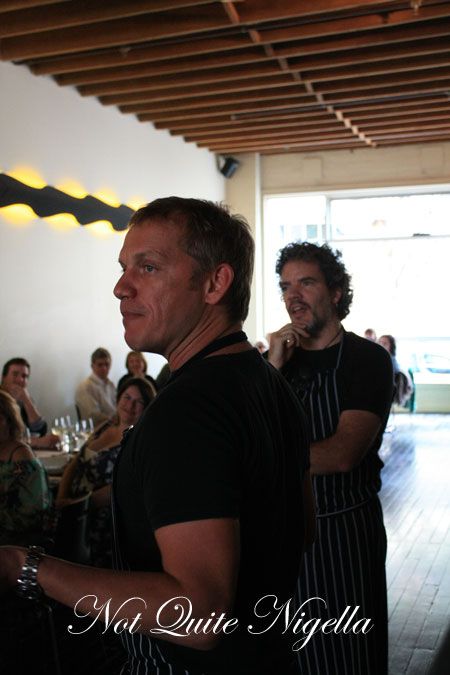 Martin Boetz and Peter Gordon met in New Zealand when doing a Leukemia event together and the plans were always on the table to cook together here in Austtalia. Boet'z cuisine is more Thai whereas Gordon's is fusion. We are to have a "Sunday roast with a twist". The veal is 15 months old and hung for 21 days. New York based patissier Pinchet Ong is in the audience as is a proud, patriotic bunch of New Zealanders. 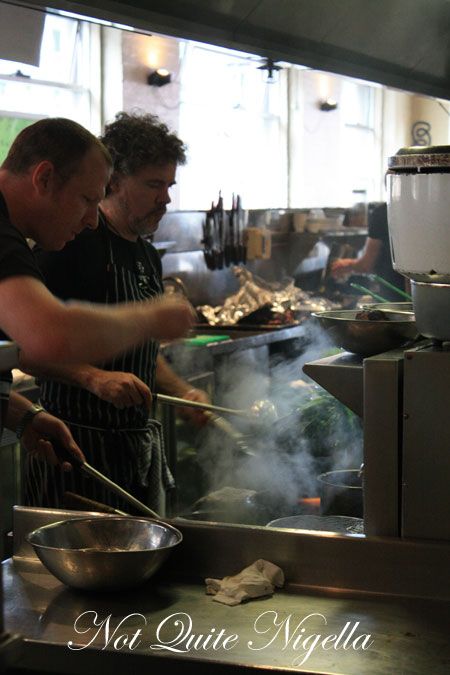 "You can buy the recipe in my book" Peter says "But I look a bit chubby on the cover, it [the cover photo] is a bit squashed" he says to laughs all around. All wines are from Marlborough, New Zealand with 2009 Hunky Dory Sauvignon Blanc, 2008 Huia Pinot Gris and a 2007 Huia Pinot Noir. 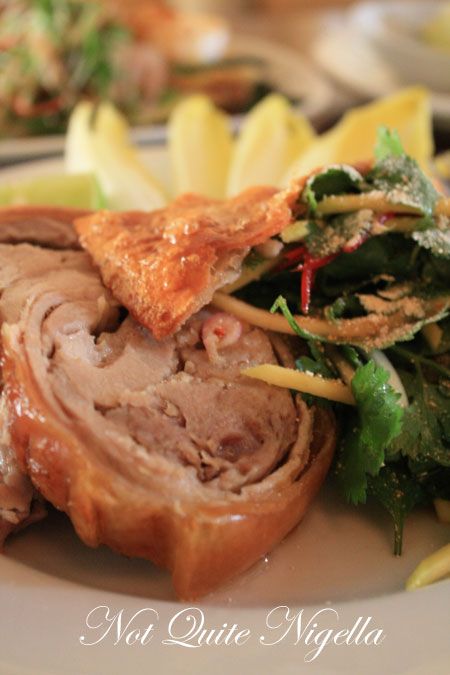 Martin Boetz of Longrain's moist and tender slices of suckling pig with crispy crackling sits beside a pile of a fragrant coriander, Vietnamese mint and bamboo shoot salad. It's sprinkled with ground roasted rice and has an overall sweetness to this dish which goes nicely with the pork. 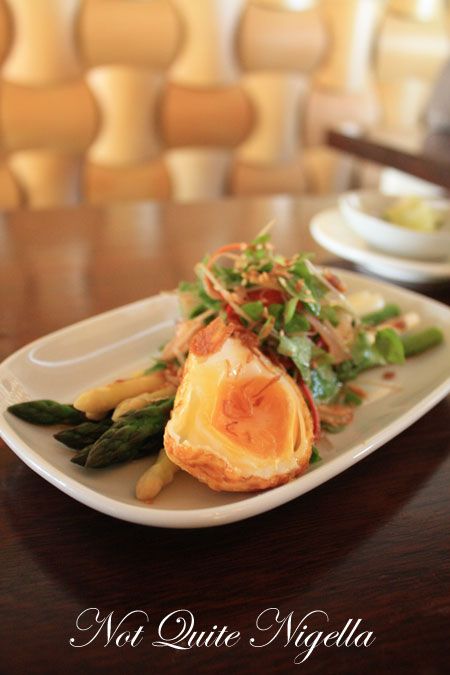 Asparagus, tomato and duck egg salad with a tamarind and sesame dressing

Boetz's spears of slender white and green asparagus sit under half of a duck egg which has been boiled and then coated lightly and deep fried. It's a lovely dish with the soft, orange hued yolk still slightly gooey. 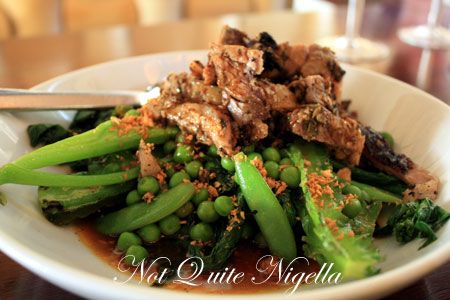 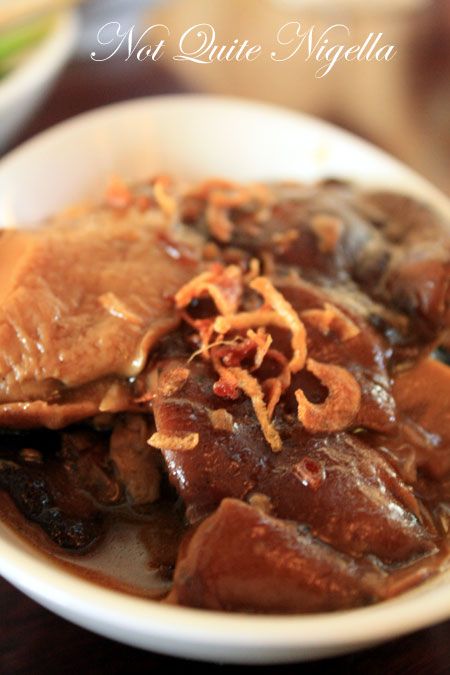 The rest of the courses are from Peter and I'm excited to finally try his cuisine having missed out on it while in London. The baby lamb with minted peas, wing beans and gai lan come out first and they are accompanied by a soy shiitake. I know New Zealanders have a way with lamb, perhaps it's an instinctive thing or something borne from eating so much of it but this is so, so good and so, so soft. The mint with minted peas are restrained (which is a good thing, I'm not big on minted peas) and they've set down the smoked kumara and potato mash for the next dish and we find that the both of them go so well together. In fact I take my alloted half (I usually give MR NQN a bit more of these dishes) as the gorgeously smooth and perfectly smokey mash (and make secret plans to make a similar smoked mash). 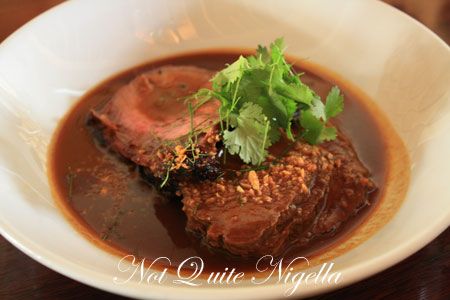 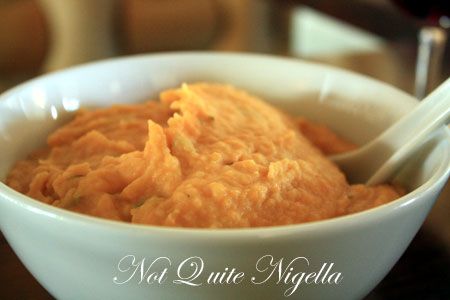 Braised in a miso sake paste, the veal is incredibly soft. Sliced in thinnish pieces the sauce that it sits in is rich and heady and one that's just begging for some potatoes to soak it up. Luckily we have some of the fabulous smoked sweet potato and potato mash that does the trick nicely. 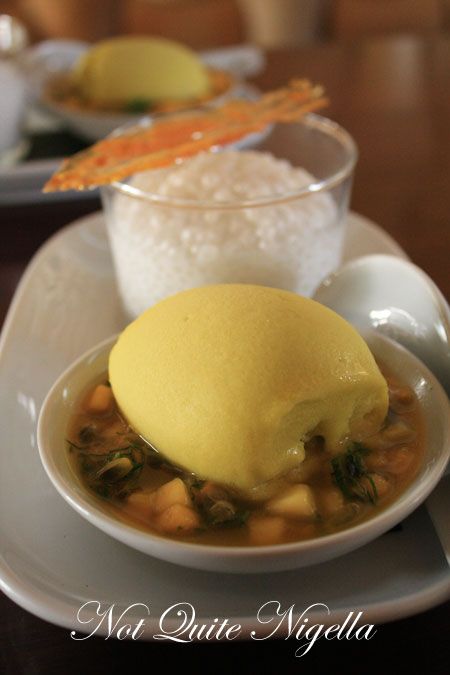 Now this was a really good example of the special dessert tank. I thought I was full after the lamb but when I tried the dessert my eyes, brain and stomach decided I wasn't done yet. The coconut laced tapioca is perfectly done, with exacty the right amount of coconut. The avocado, mango and yuzu sorbet is incredibly refreshing and the 3 flavours go so well together so you could never detect which 3 fruits were in it and the passionfruit and mango salsa is fresh with mint and the sesame praline, which I initially thought didn't have enough sesame just from the look is perfect. The sesame seeds are toasted and it gives it just the right amount. And you can be sure I ate every little bit of this generously sized tapioca. 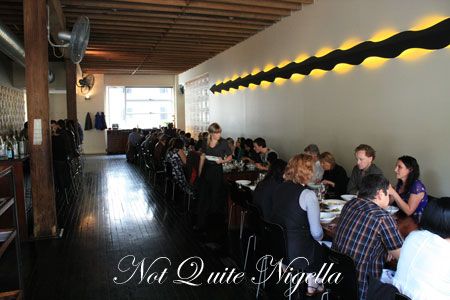 Mr NQN is a man of few words, a bit of a strong and silent type but when he finishes his meal he says simply "I think that was my favourite meal ever".

NQN and Mr NQN attended as guests of Tourism NSW