South America is on Thursday, The Lincoln, Kings Cross 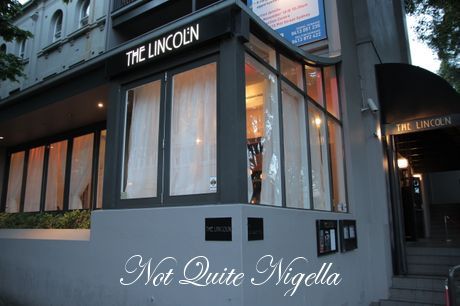 "I'm pretty sure I'm sitting just where I slipped the money into the stripper's g-string" I whisper to Mr NQN quietly. He looks around. "Yep it sure is" he says. 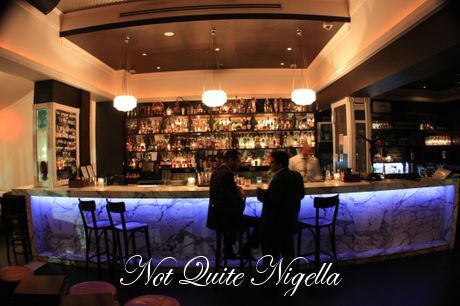 Allow me to explain. We're sitting at a table at The Lincoln which is a lovely, stylish restaurant and bar in Kings Cross. What it used to be a few years ago was a strip club called Dancers where my friends Teena, Gina and I were taken to one evening (don't ask, although I should clarify that we were there as patrons, not as strippers!). Now, years later, we're stepping into a different sort of establishment and I am greeted by Coral who is the lovely marketing manager of A Taste of Peru and partner to Chef Alejandro Saravia. Every Thursday in October, they hold a special South American themed dinner where diners get to try a 10 course piqueos (like tapas) menu for $65. And unlike their previous events, this menu is more South American than specifically Peruvian. 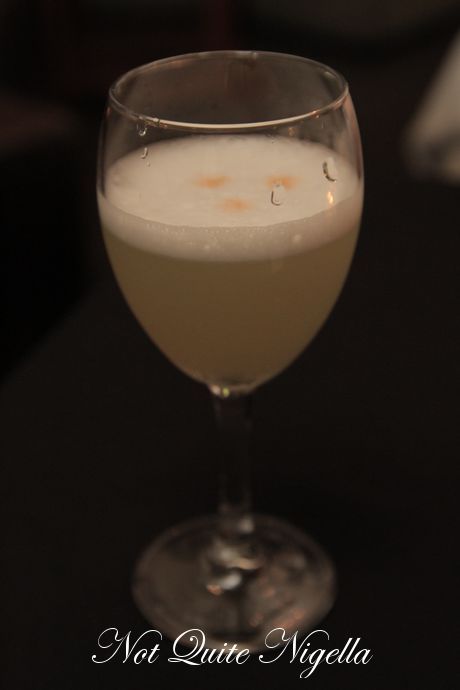 We start with a pisco sour drink made with egg whites and Santiago Queirolo Pisco which is liquor distilled from grapes. It has a slightly sour taste and has three drops of orange bitters but it is actually quite refreshing, like a lemon drink. 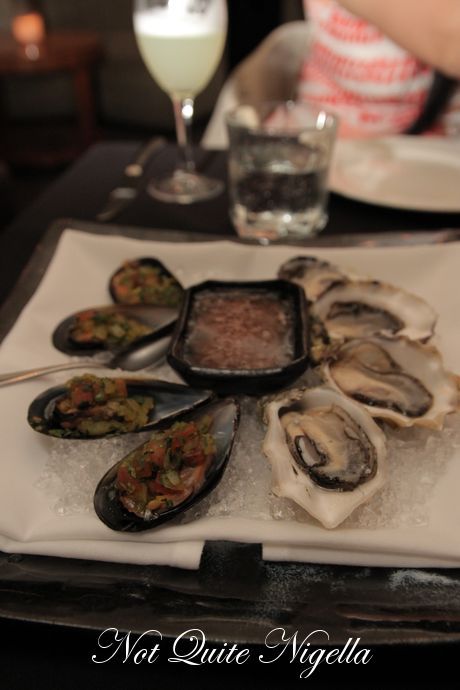 Our first course is two fresh Sydney rock oysters with a spicy Peruvian pepper and jora vinaigrette which again has the slightly sour and peppery flavour. There are also two mussels per person that are topped with a tomato, onion and chilli topping which is fresh, flavoursome and spicy. 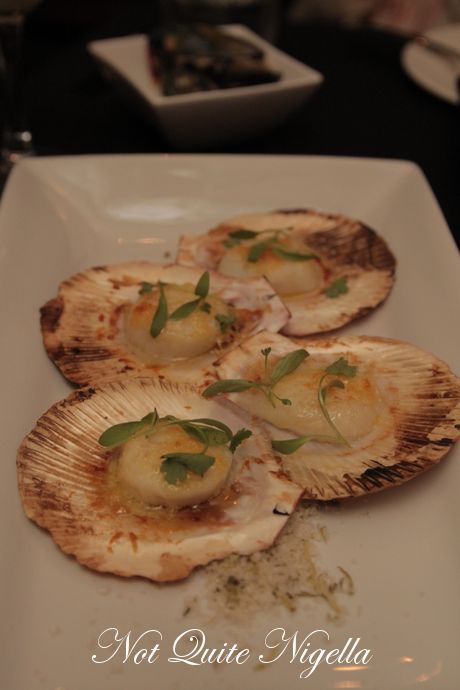 Our next course is scallops on the shell grilled with a simple parmesan gratin which contrasts nicely with the clean flavours of the previous dish. It is simple and the scallops are juicy. 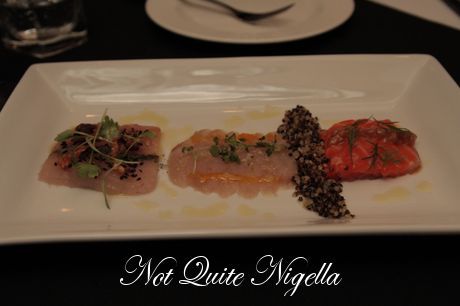 I know Mr NQN will get excited about this as he loves sashimi as much as I do. There are three types of raw fish here: kingfish cured in pisco and aromatic herbs dressed in lemon oil and aji amarillo (a type of chilli) drops which Alejandro tells us he deliberately served without the herbs on top of it so that their aroma would be a surprise. This is both of our favourite as the unexpected herbs  and lemon lend so much to the flavour of the kingfish.  Then there are the slices of tuna with little pieces of silver cripsy skin (yum!), corinader and lemon salt and then salmon slices dressed with a tangy smooth garlic and dill sauce. 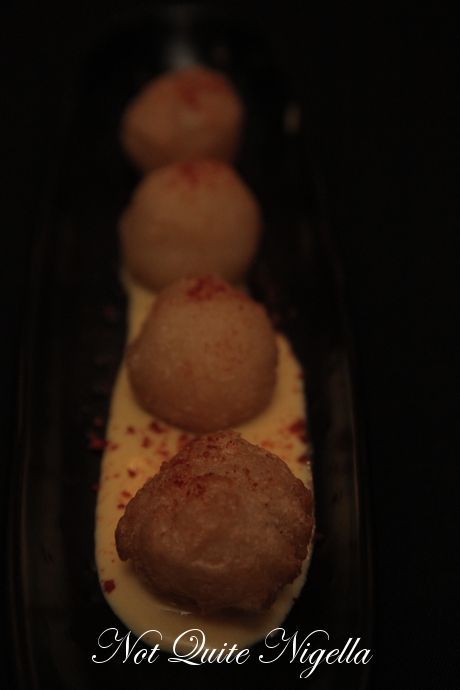 We next try the famous croquetas filled with cassava and Manchego cheese. It comes with a spicy aji mayonnaise. The croquetas need a tad more seasoning but the filling has an interesting texture as they have used cassava instead of potato. 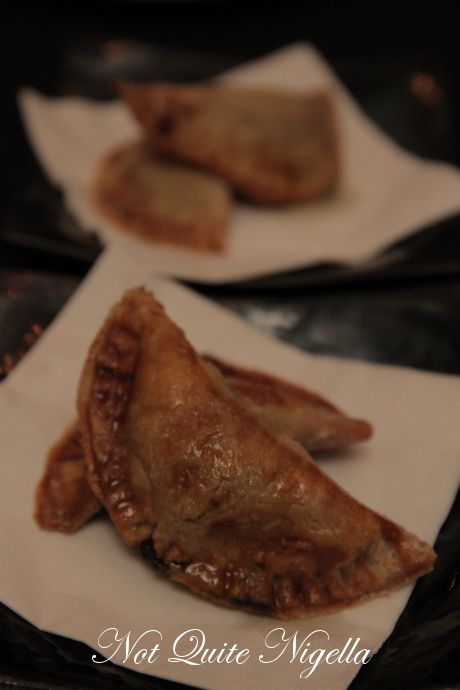 There are two types of empanadas: one filled with a chicken in a spicy sauce and one with spinach and ricotta. They're small and baked in a shortcrust pastry until dry and crisp. It's perhaps a bit too dry for my taste and out of the two I prefer the chicken one. 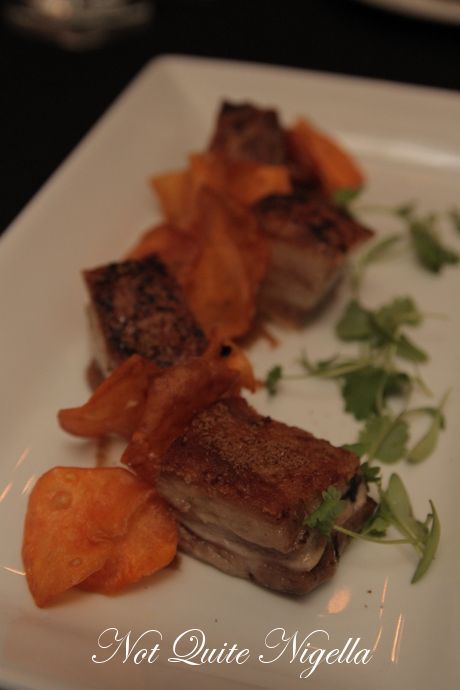 The pork belly is fantastic. Alejandro marinated it in sugar, salt, hora chica (a fermented corn) and then sous vide it overnight at 80C so that it is beautifully tender. It is served on a sweet caramelised onion puree with sweet potato chips. And the tastiest touch? A sprinkle of cumin and star anise on top to give it aroma. 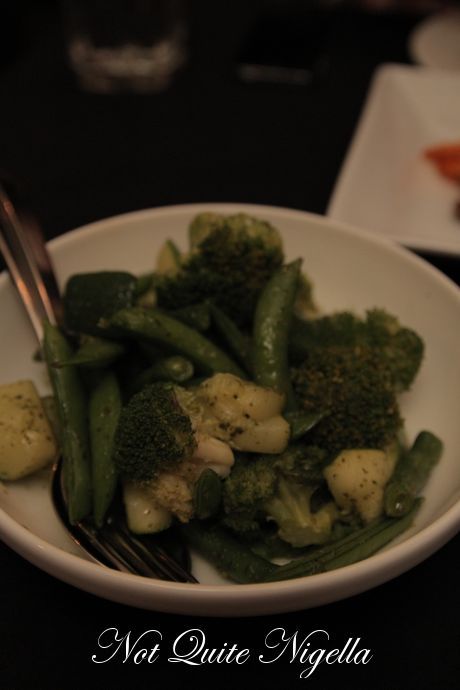 The pork belly was served with some steamed broccoli, zucchini and sugar snap peas with a very interesting black mint vinaigrette. It reminds me of Thai basil in that it is similar to regular basil but has a slightly different flavour (and it also goes nicely with the caramelised onion puree, I couldn't let any go to waste on the plate!). 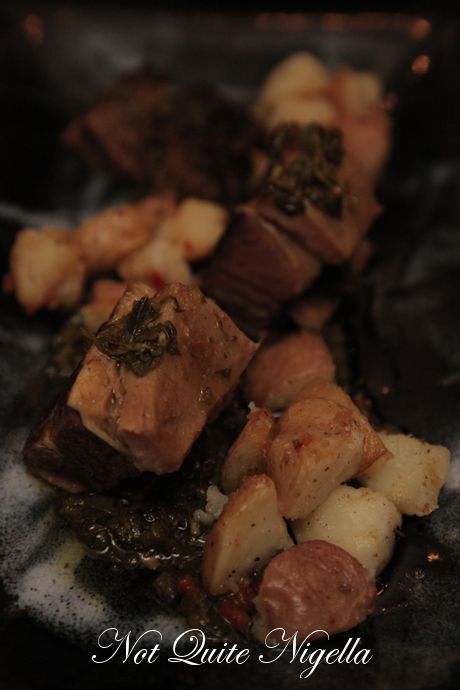 I love chimichurri, that flavoursome mix of herbs, garlic and oil and the gorgeous smokey marinated beef ribs go perfectly with this. The kitchen here is too small to smoke so Alejandro smokes them in the restaurant. He tells us that it is a month old chimichurri with fresh coriander, parsley, oregano and capsicum, aji chilli and white wine vinegar. It is infused without heat and because it is a month old, the flavours are very developed. The beef ribs are soft and fall off the bone and are accompanied by moreish morsels of semolina tossed, crispy diced potato. 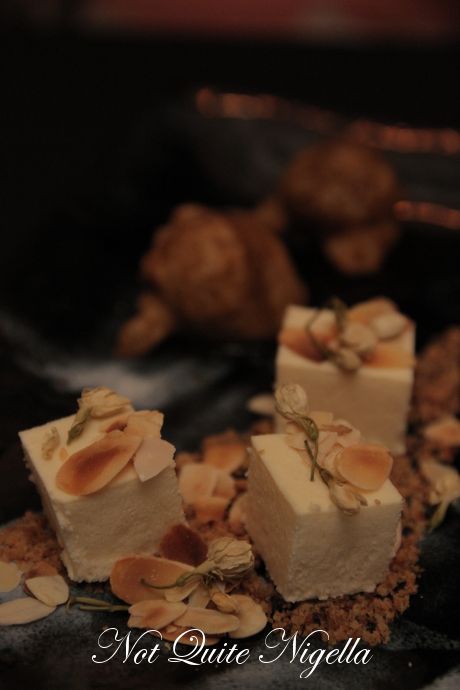 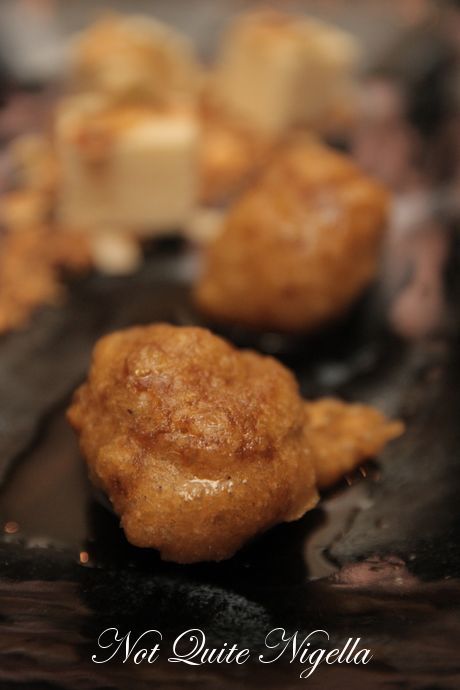 Dessert time! There are two parts to this desert, a delicate frozen lemon agar tart in small cubes dusted with toasted flaked almonds on a layer of biscuits, all very nice but I'm honing in on the picarones. Coral tells us there are a popular street food and these ones are made of pumpkin and sweet potato mousse with cinnamon and they're doused in a molasses flavoured syrup. They're so good that when we look mournful when they take the plate away the waitress offers to get us more which we gladly and greedily accept. I know, but some things are just meant to be eaten twice ;)

So tell me Dear Reader, do you often go for seconds? 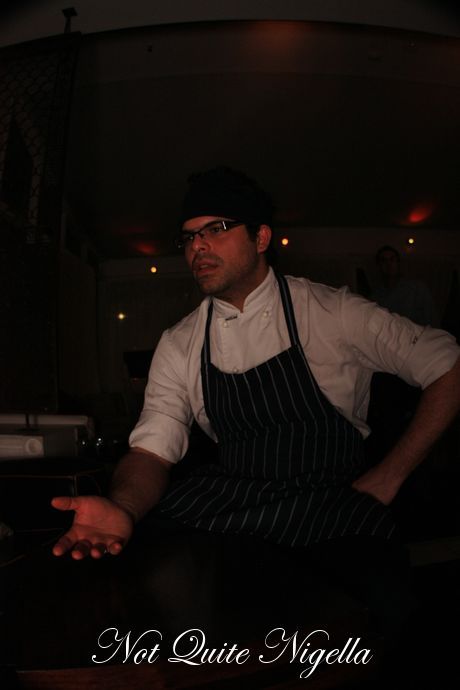 South American is ON Thursday at The Lincoln

The South American on Thursday menu is on the 21st and 28th of October. Book at A Taste of Peru. 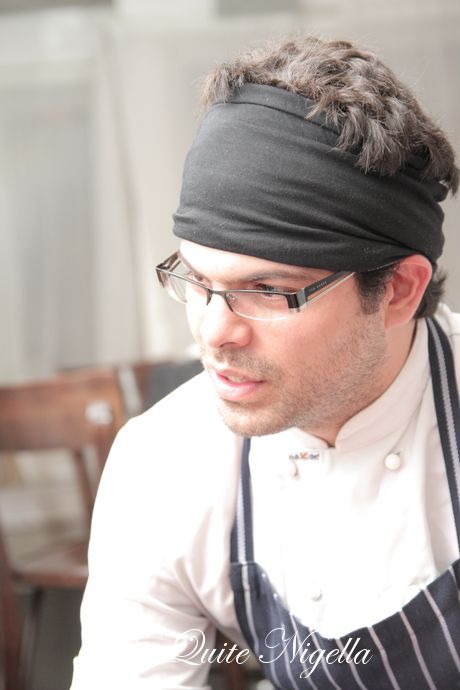