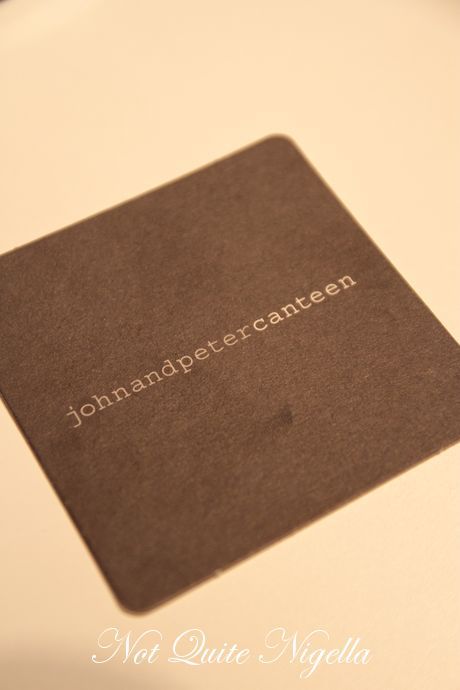 It seems I'm trying but failing spectacularly to eat healthily. Perhaps just before Christmas isn't quite the time to instill a healthy eating regime. Even typing out the words makes a voice inside my head shriek "destined to fail!" but nevertheless, when faced with a meal in front of me, I try and at least make an imitation at resisting. A pale imitation mind you...

I'm standing in front of the Carriageworks at Eveleigh with bucketfulls of rain falling and the odd cyclist speeding by in a rush to beat the rain. I'm trying to carry a camera bag, handbag and an umbrella while cursing my sartorial choice of open toed heels in the rain. And thankfully John and Peter Canteen is right near the main entrance and only requires a short sprint in the rain. 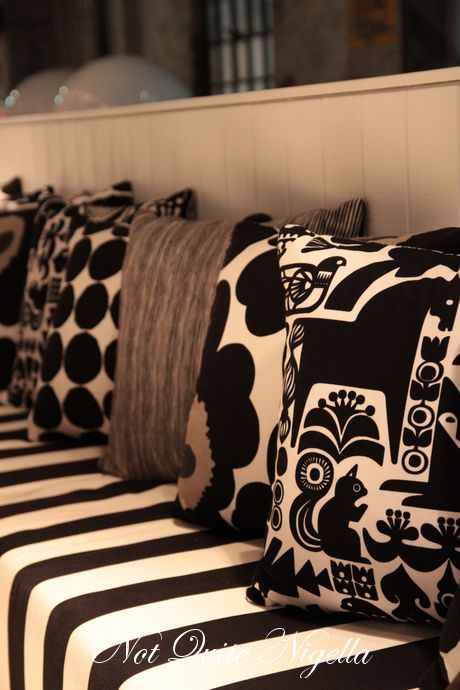 John and Peter Canteen is a catering business that has expanded to serve lunch and dinner and looking around, it appears quite full this Wednesday evening. There are theatre patrons that want a quick drink as well as couples and groups that look like they've settled in for the night. White fringe trim hangs from scaffolding and studio lights and there are striking black and white print cushions and stripey banquettes. 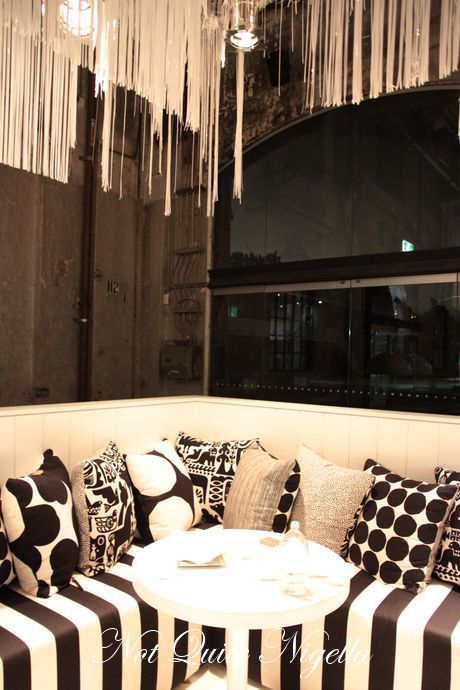 Yoshiko is already sitting there and she has had a good look at the menu already. As a vegetarian she's happy with the choices, three entrees and one main. Me, I'm quite smitten by much of the menu from the sounds of things. We take some recommendations from the waitress and service throughout the evening is friendly and deferential. We start with entrees, both vegetarian, as I am trying to eat healthily-well I did mention I was trying ;) 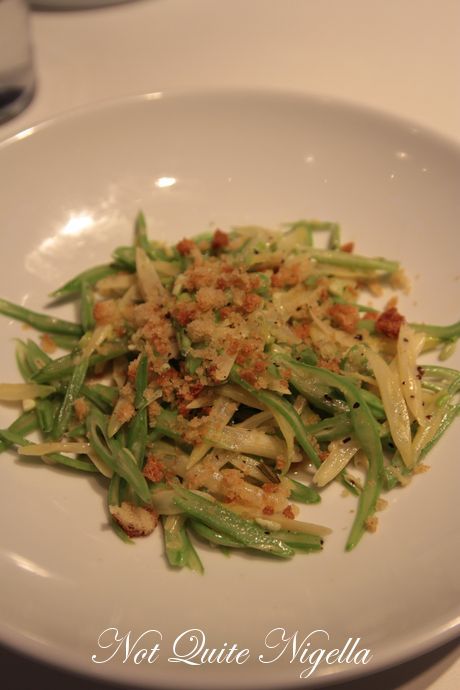 I had no idea what to expect from this dish and it is a finely shredded green and yellow bean salad tossed with bagna cauda (a garlicky anchovy dip) and a sprinkling of crunchy, golden, rough breadcrumbs which tickle my fancy immensely. The beans have a lovely crunch to them and the bagna cauda gives the salad flavour while the pangratatta breadcrumbs gives it crunch. 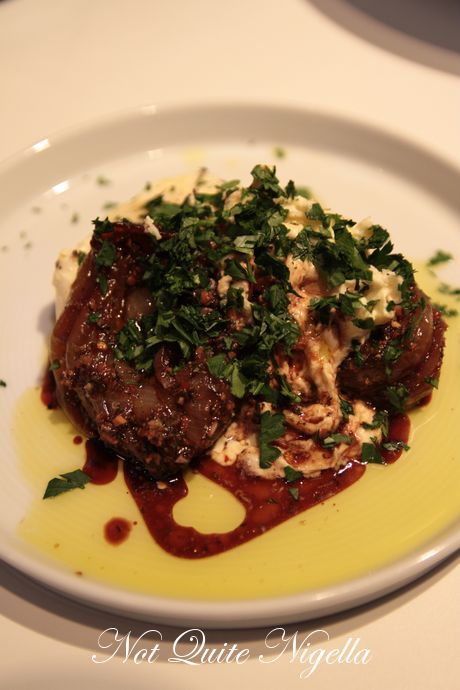 If I see burrata on a menu, I will inevitably have to order it. I know, I only just mentioned that I was trying to eat healthily and then I'm eating a cheese with a mozzarella outer and an oozy cream centre paired with soft, sweet baked onions. The burrata and onions are a good pairing and all that I think is missing is a piece of bread to mop up the juices left. I do try not to embarrass my dining companions by licking the plate! 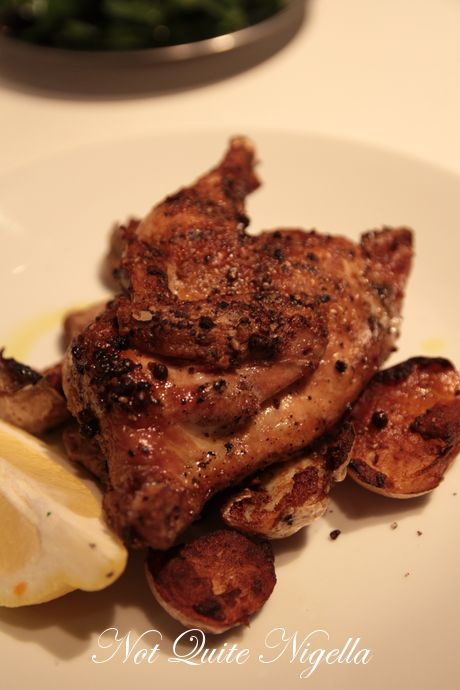 The waitress mentioned that this chicken dish is a bestseller and given the rainy weather, I felt like a bit of roast chicken. The  quarter chicken has a good dose of spice from black pepper and a juicy, succulent centre and I squeeze the lemon over it liberally. It is served with crunchy roasted potato chunks. 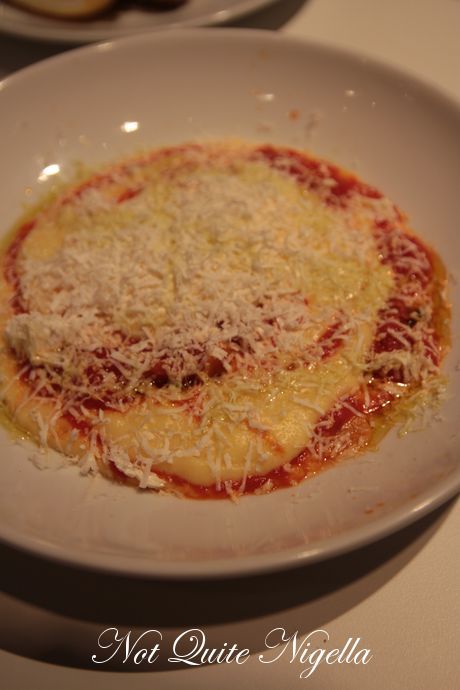 I think this dish is best described as a big warm hug from an ample bosomed nonna. The creamy polenta was soft, luscious and comforting. To counter the mild creaminess were shavings of ricotta salata which is a hard, salty ricotta and a tomato ripple which is like a home made tomato sauce. I'm no therapist but I do think they should serve this to people that have had a hard day and need a hug. 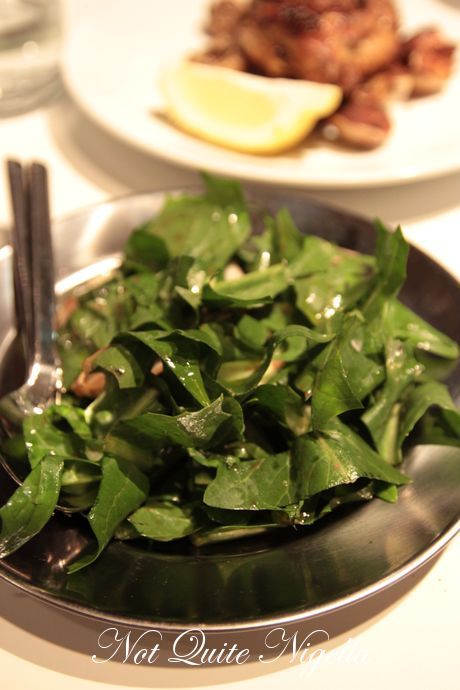 I thought that this was on the small side, however, we ended up quite full so we actually ended up leaving a little. The chicory leaves are sliced and served with thinly sliced, raw Jerusalem artichoke and a simple sweet balsamic vinegar and oil dressing. 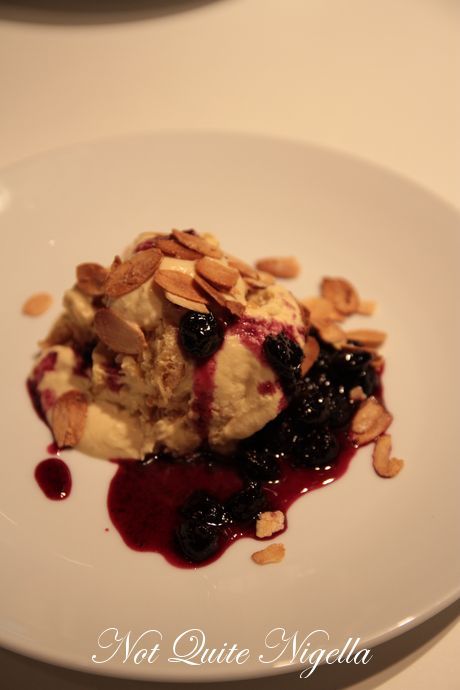 The Torte di Verona is a soaked pan doro sponge with marsala mascarpone and sweet stewed blueberries. I didn't expect the generous dash of marsala in the mascarpone and it's very similar to a tiramisu in spirit.  Follow the polenta with this boozy, creamy offering and any thoughts of a bad day will disappear and you may sleep like a baby. 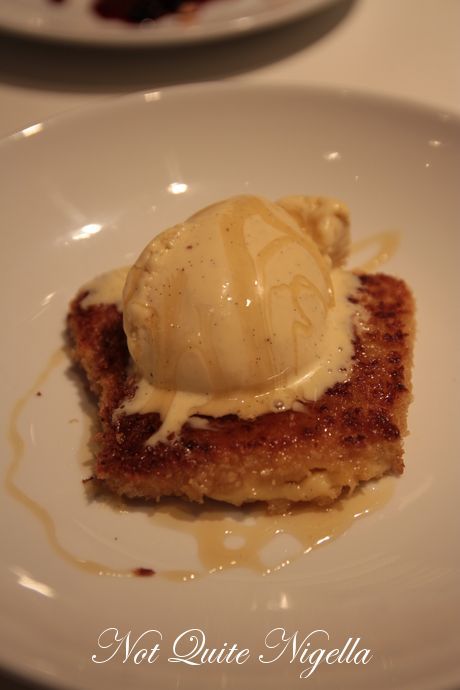 We simply had to order this when we heard that this was deep fried custard (and by now you can see how far my endeavour to eat healthily went). Indeed, it is a smooth vanilla bean custard with a hint of lemon coated in crunchy breadcrumbs and then deep fried and then covered in vanilla bean ice cream and then a drizzling of chestnut honey which is a most distinctive honey that gives it a very unusual taste (I'm still trying to place the flavour of chestnut honey). As far as honey goes, the flavours of chestnut honey are complex- it is quite hard to find here in Australia and I am lucky enough to have a jar at home. It's not a flavour for everyone-it is a strong flavoured honey, and gives the dish an almost metallic flavour to it but I think the generous serve and richness did us in at the end.

OK so the healthy eating regime went in the way of the rain-down the drain but sometimes when unexpected rain hits, the only normal response is to burrow oneself in a big bowl of something delicious.

So tell me Dear Reader, what do you do when rain hits? Do you go outside or bury yourself in bed? And which dish says "a big hug" to you? 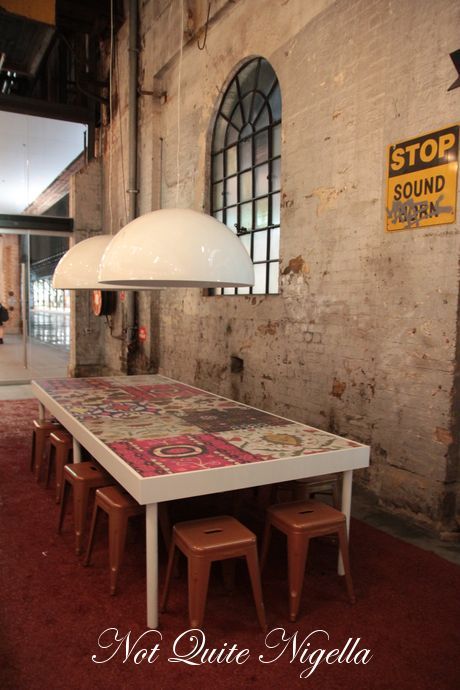 Bookings recommended (they are sometimes closed for functions)