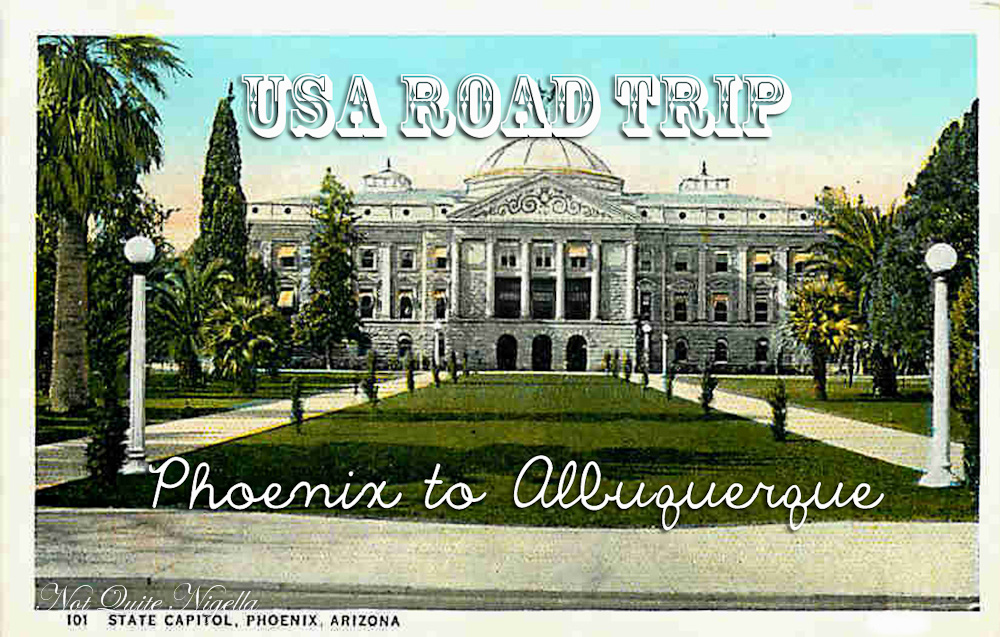 It's day two of our road trip across America. "Where are you guys from?" our friendly waiter at Lolo's chicken and waffles asks Belinda and I. We tell him that we've come from Sydney, Australia.

"Do you get many Australians visiting?" I ask him. 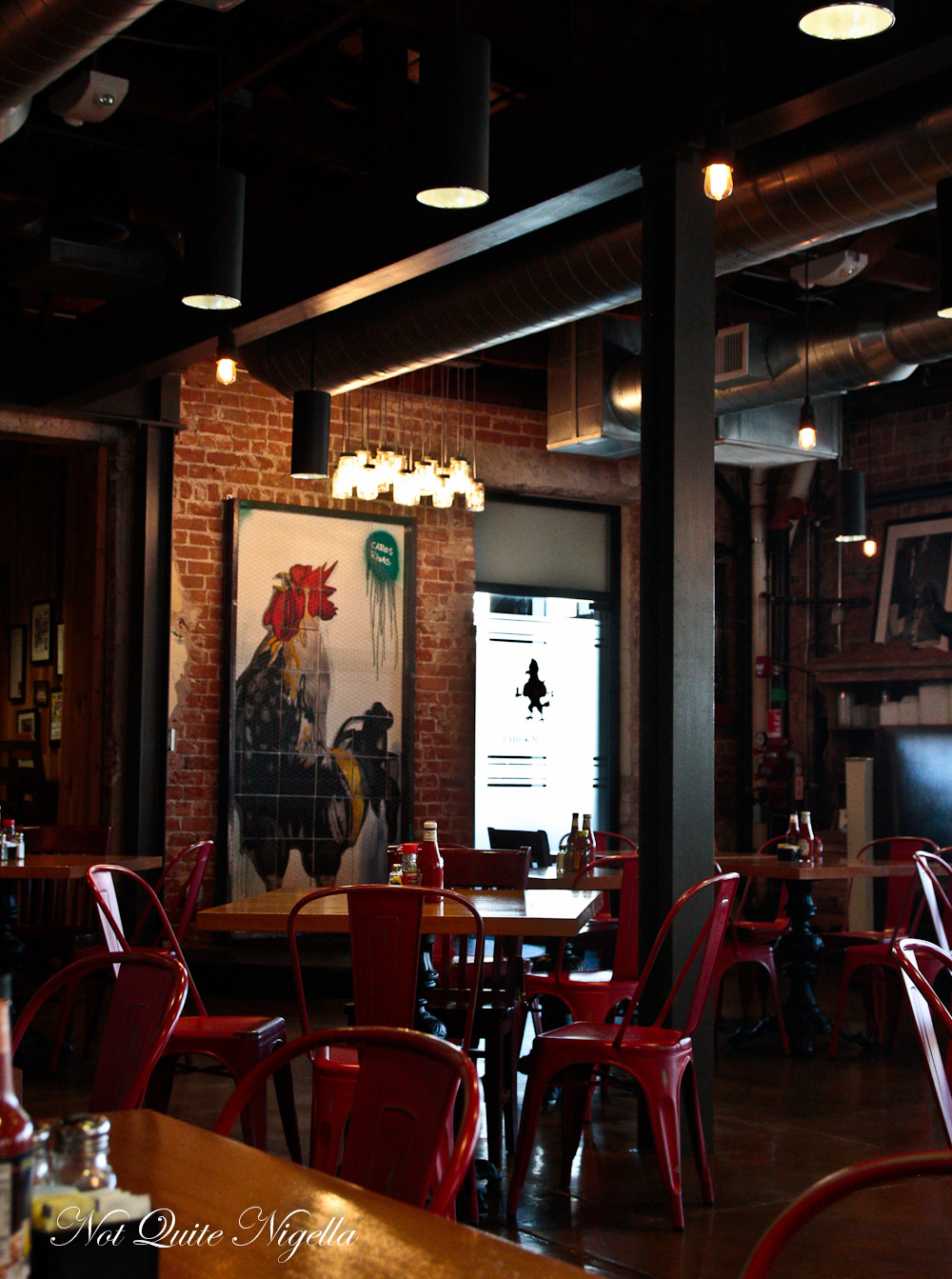 "No as a matter of fact we don't. And because you've come all the way, go ahead and keep the menu as a souvenir" he offers. Lolo's Chicken and Waffles is a soul food restaurant that is owned by Larry "Lo Lo" White. He's the son of Mrs White from the eponymous Mrs White's Golden Rule restaurant. Open in 2002, it s menu proudly displays that it serves "breakfast all day and night!" 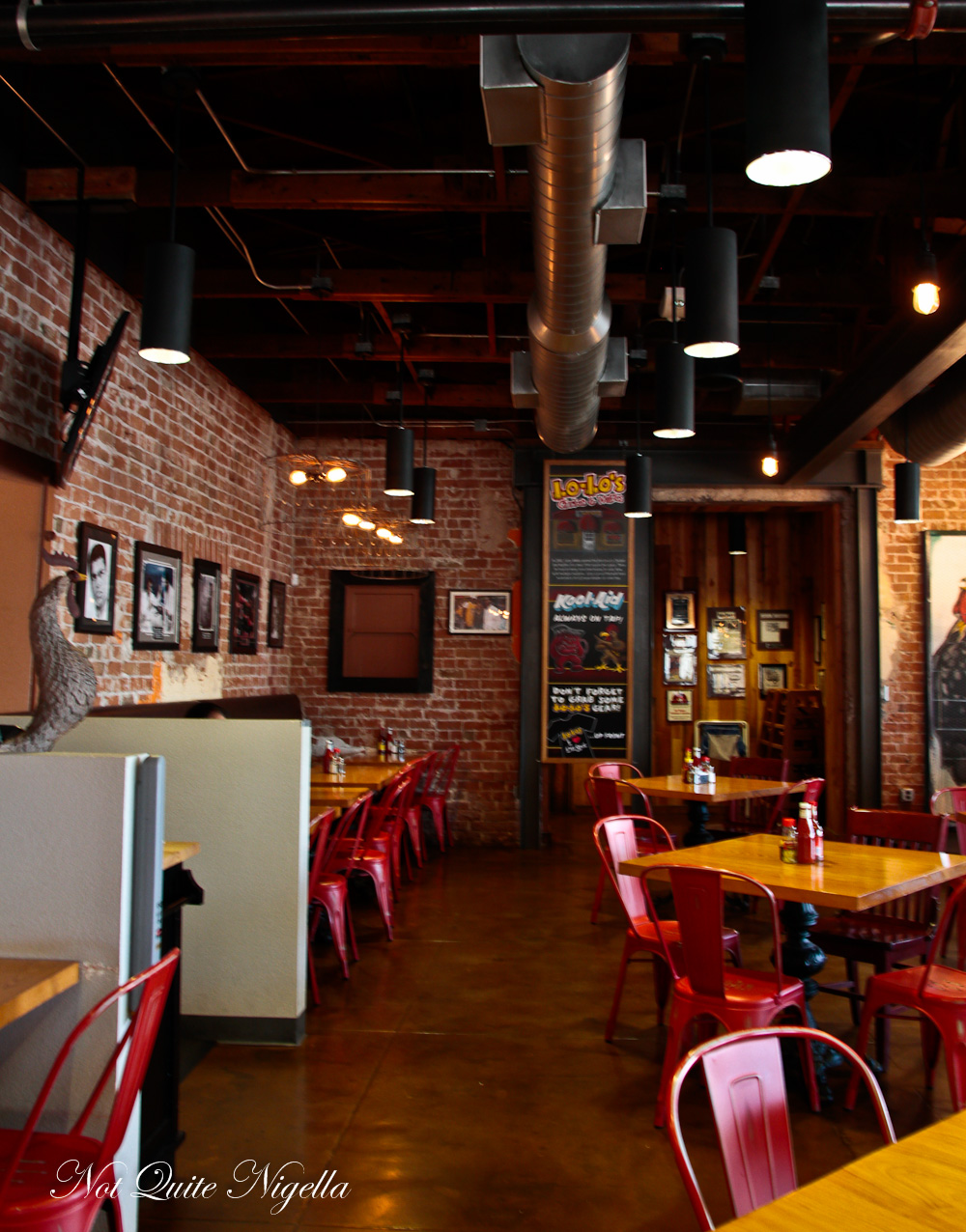 The restaurant is modern and warm, courtesy of a recent revamp. There are exposed wooden beams, chicken cage and mason jar lamps and metal chickens adorning the walls and ceilings. We order the chicken and waffles because it would be silly not to and dither over a "Phat Azz Samich", "Chyna's Honey Hots (wings) and "DVA's Hot Ghetto Mess" (wings over white sliced bread).

Oh and did I mention that it's about 9 o'clock in the morning? As you do because of course we need to hit the road soon to make our way onto the legendary Route 66. It's quiet this Monday morning as you'd expect but come Friday night and Saturday during the day, the queues are said to be long and snake out the door. 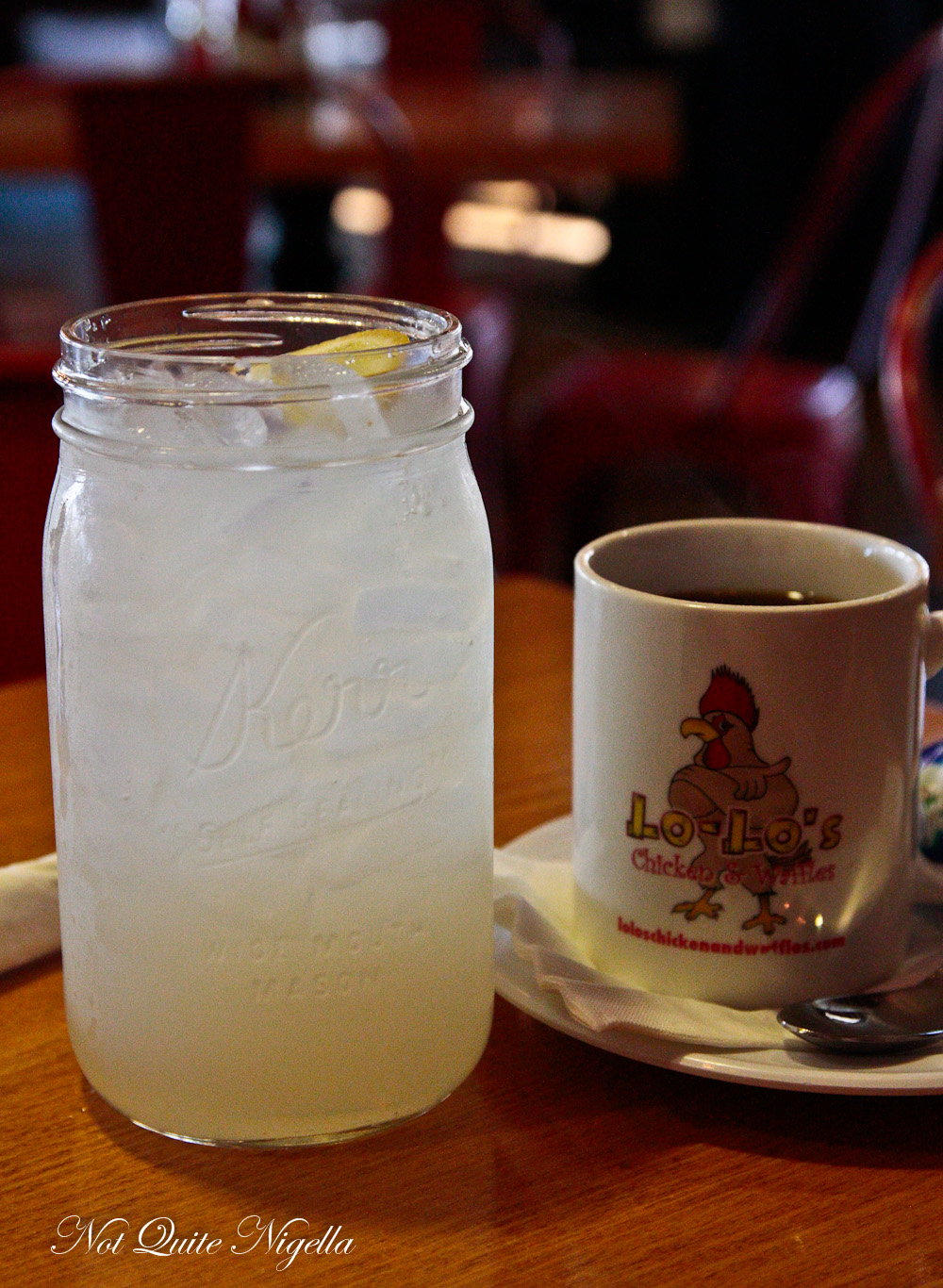 "A jar of drank" aka home made lemonade $3USD

The lemonade comes in an enormous mason jar, packed full of ice. It's a home made lemonade and just the right side of sweet and tart. 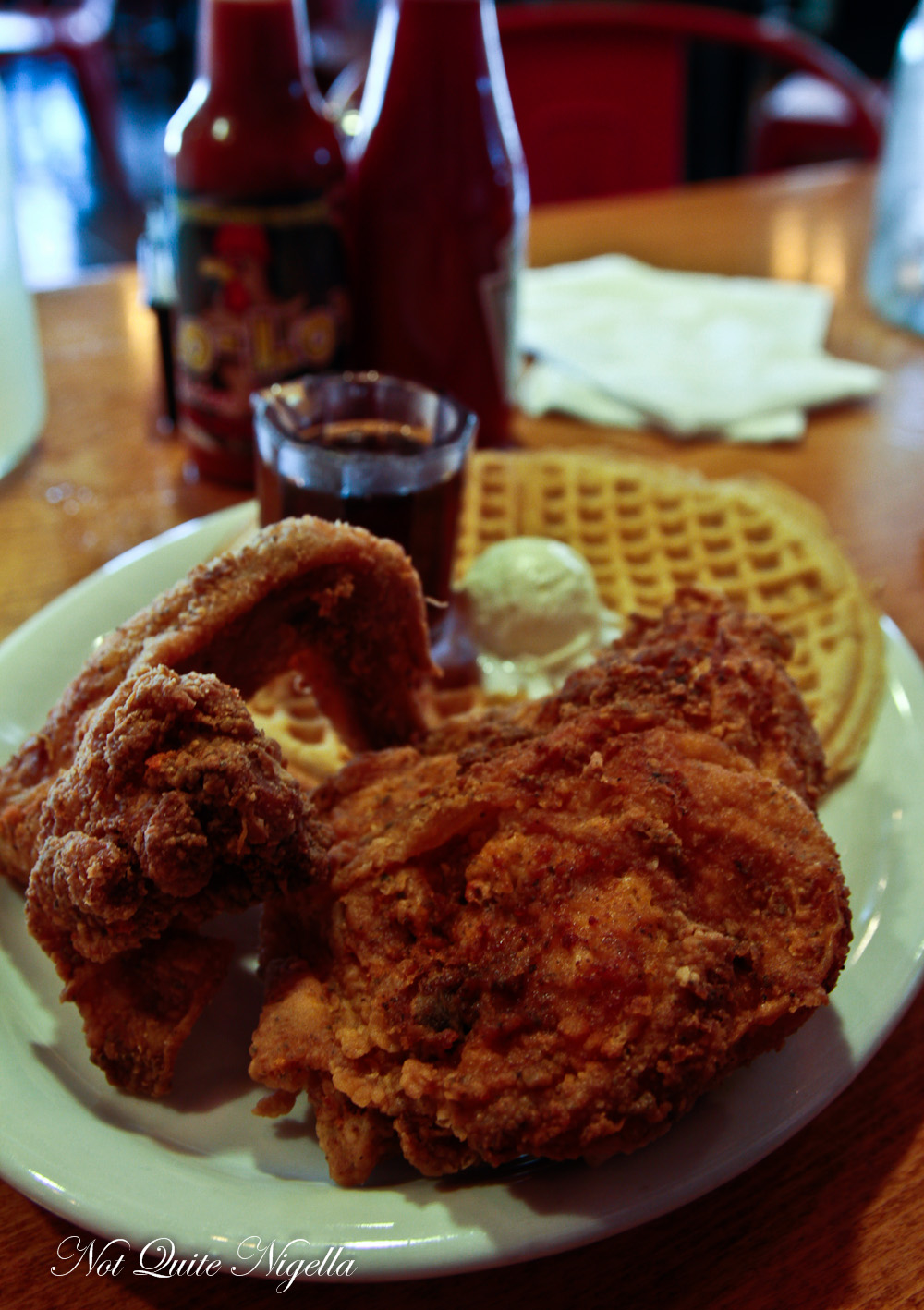 There are several versions of the chicken and waffles combo but we went for this because Belinda likes chicken breast and I like wings. Chicken breast is a real test of how well chicken is cooked. It comes as two portions of chicken with a large waffle, a ball of whipped butter and maple syrup. You pour the syrup on top of the waffles and chicken and dig in. The breast meat is so moist and tender. We ask their secret and they tell us that it's simple. Just cooking the chicken without overcooking is all they do. "If a chicken is dry then it's overcooked" our waiter says with confidence. 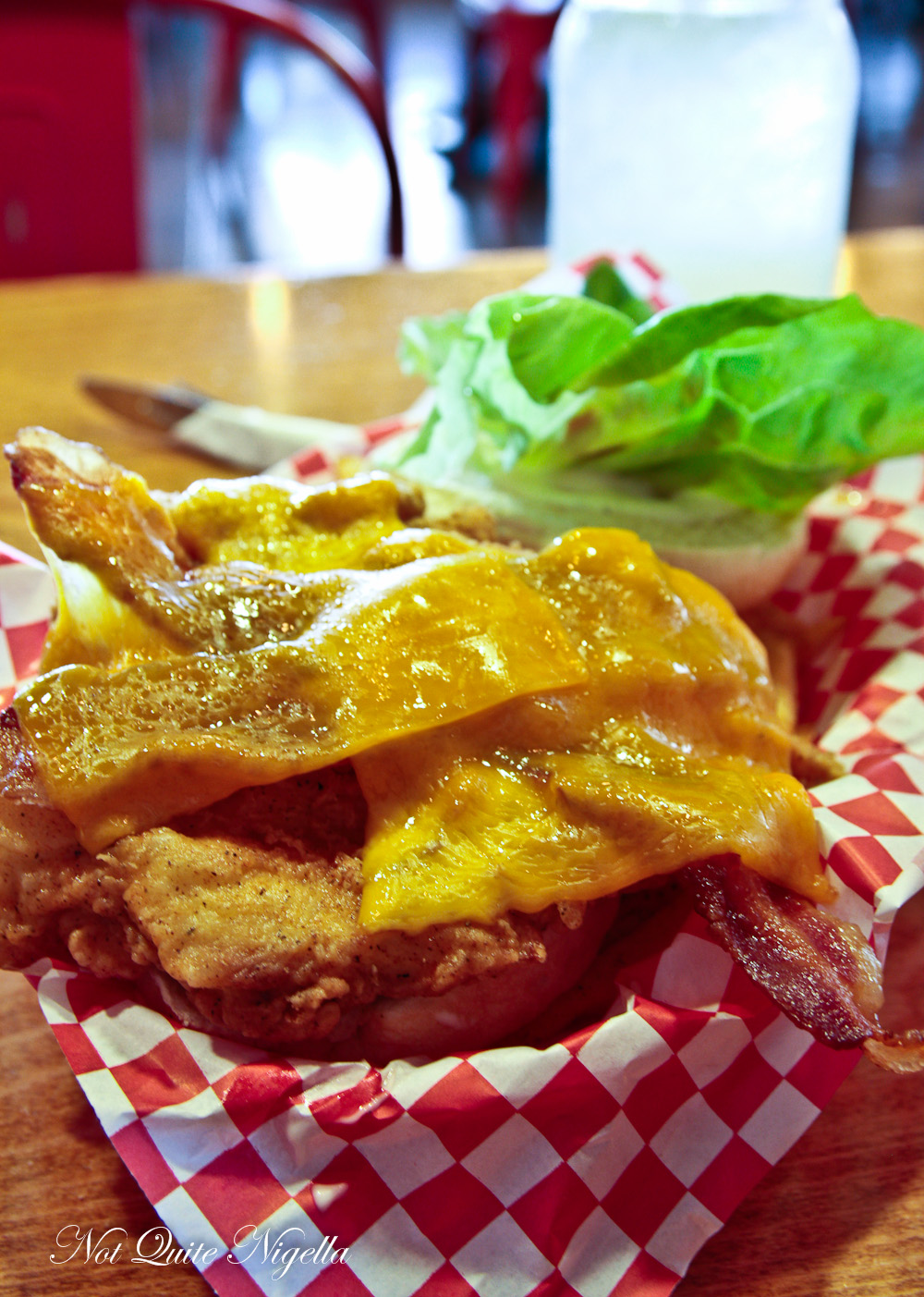 The Phat Azz Samich is in short fabulous. The chicken breast is enormous, moist and cooked through yet juicy to the thickest part. There is cheese, bacon, cherry roma tomatoes and the freshest lettuce we've ever seen. 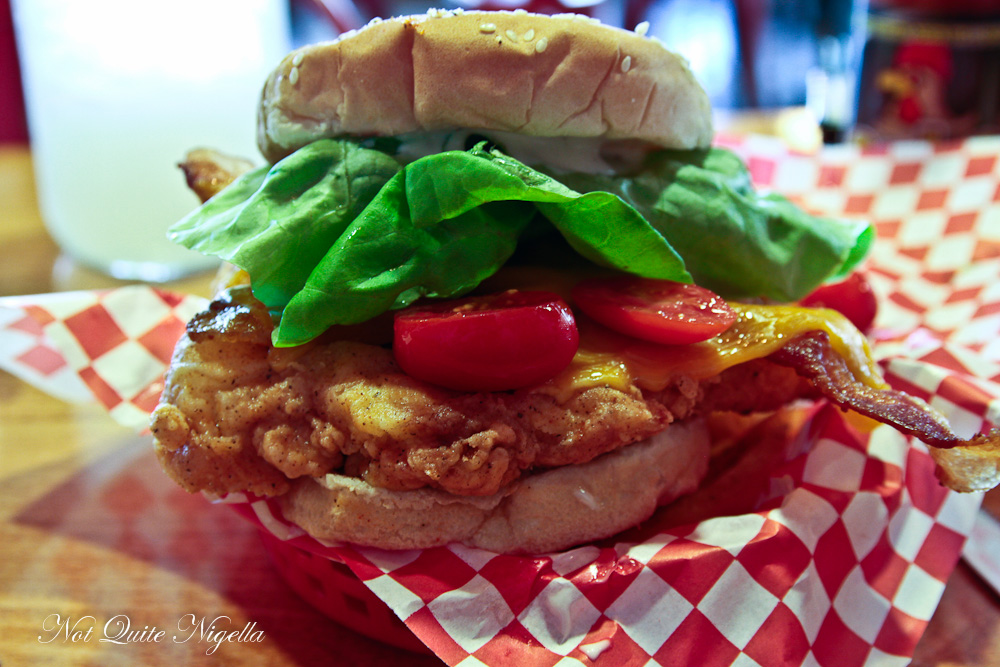 The Phat Azz Samich put together

We opted for ranch dressing on the burger. It's impossible to pull this away from your mouth once you start eating it's so fresh and good. "Look at that lettuce!" Belinda says looking at a fresh, crisp leaf of bright green lettuce. 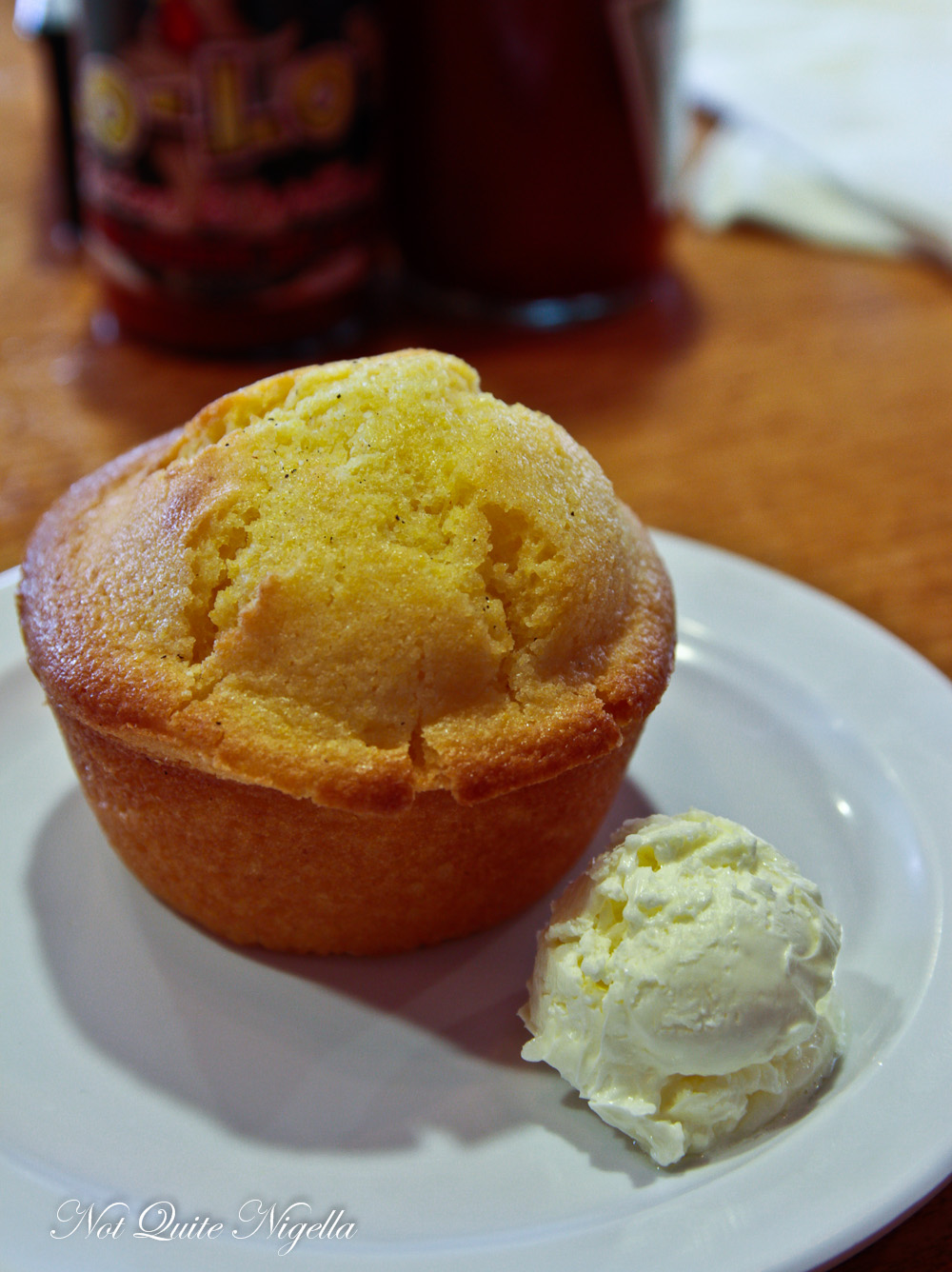 There are a variety of sides including brown sugar for 50c and cornbread. Here it comes as a single muffin, slightly sweet with a cakey texture. 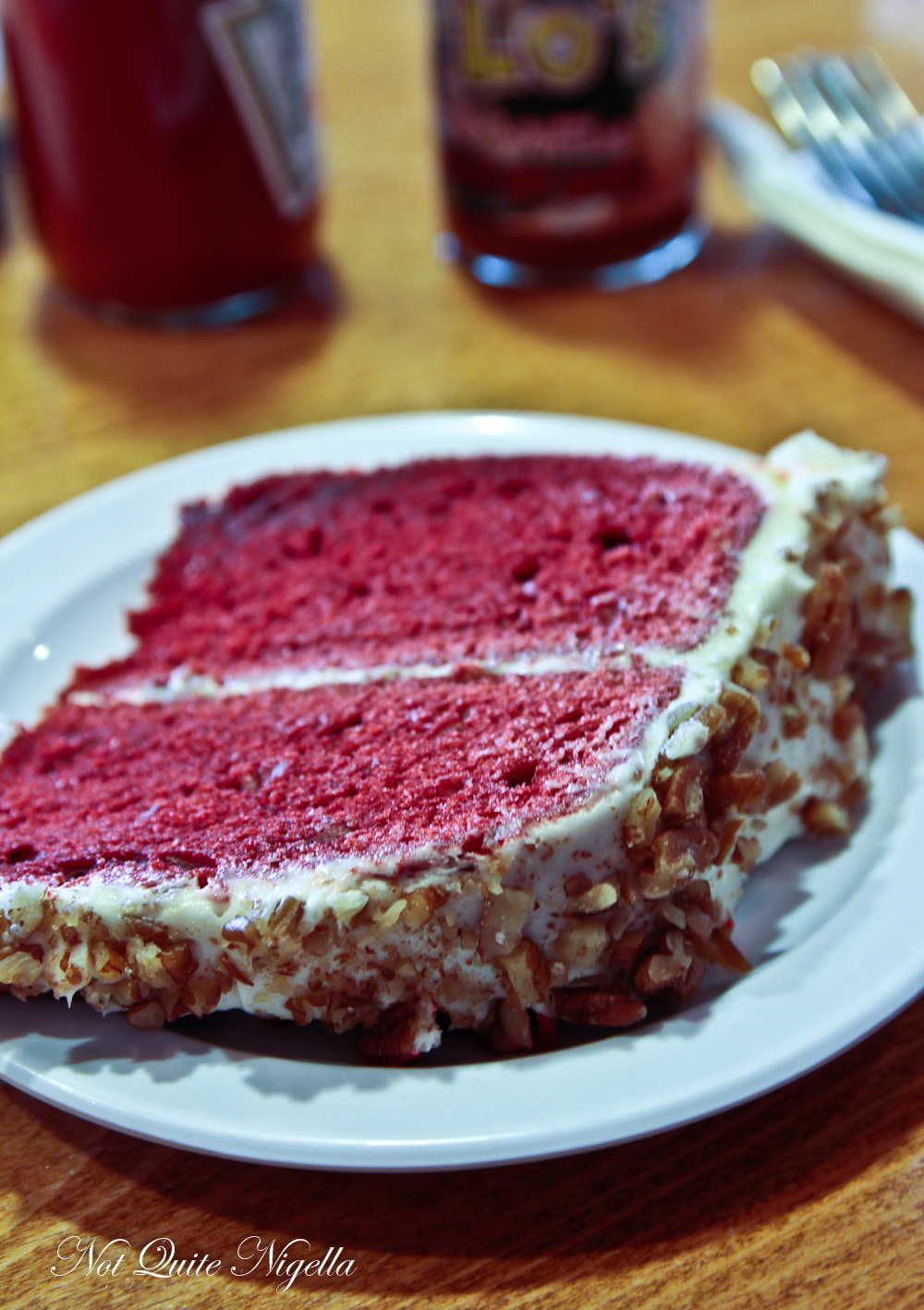 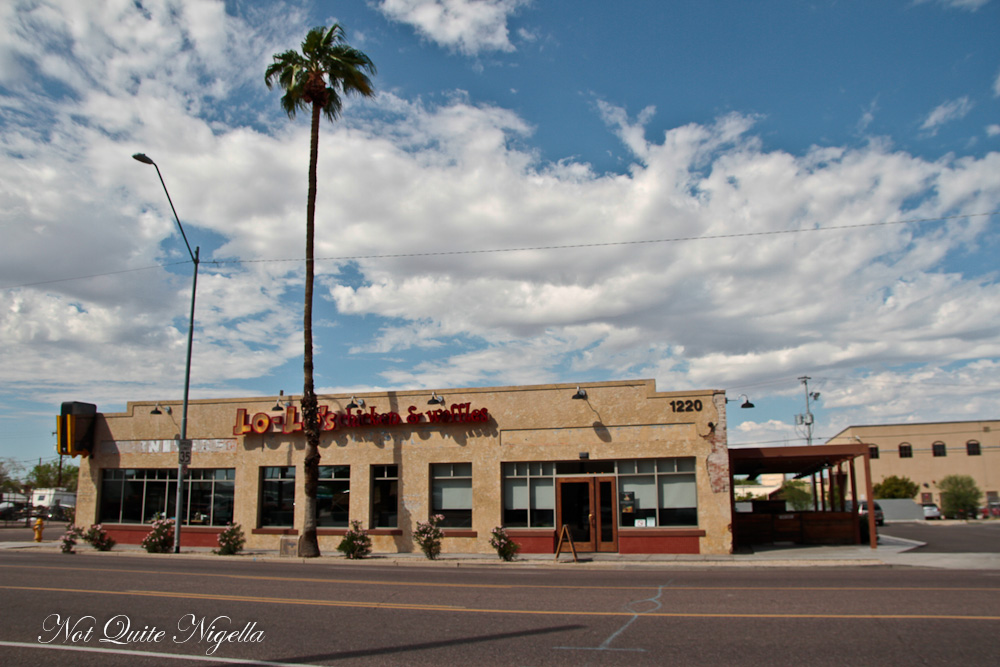 I notice on the menu that they do catering including bereavement packages. I can imagine that if anything would help lift the mood of a wake, it's chicken and waffles... 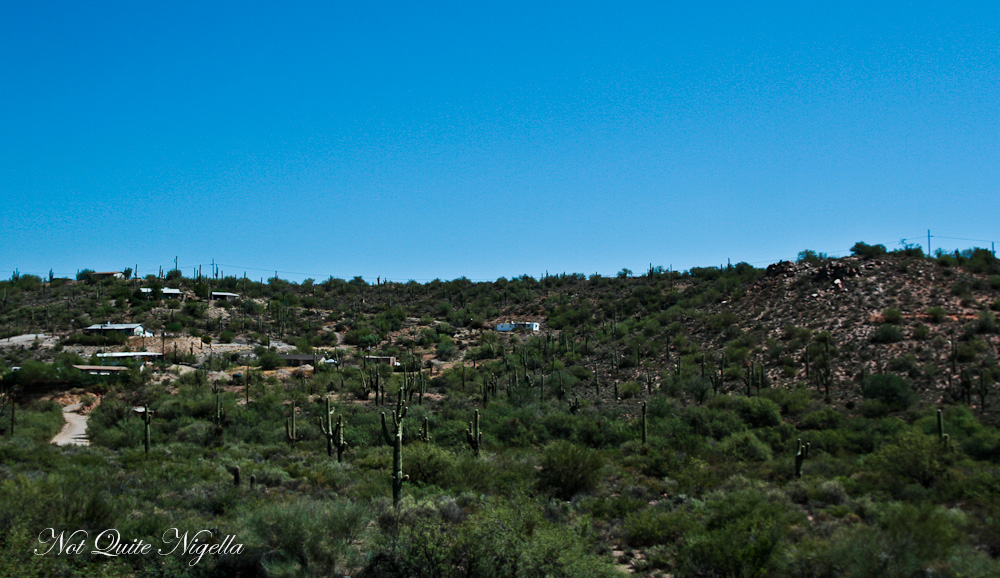 We set off for our next leg of the journey to Albuquerque. It's a six and a half hour drive which we punctuate with rest as well as curiosity and lunch stops. We pass signs like "Bloody Basin Rd" and "Dry Beaver Creek." We watch as the terrain changes from desert to tall trees and it reminds me of summer season in Jasper, Canada. The high altitude cools off the heat. 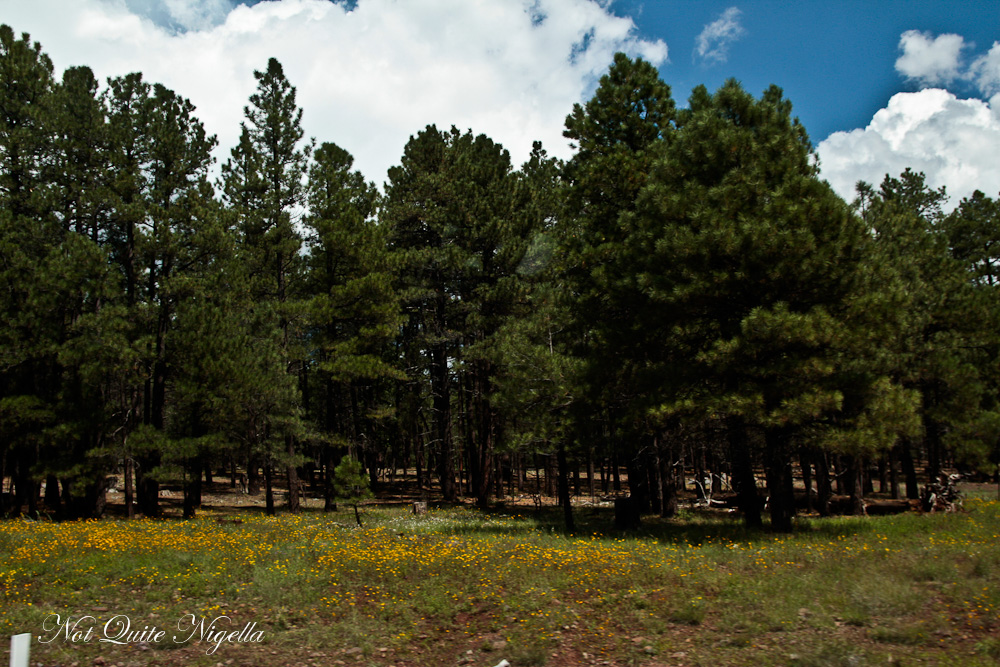 We stop at Flagstaff after one and a half hours for a fuel refill. The number of people stealing gas means that fuel is paid for before you pump it. And here's where we have a colourful encounter where a local steals our $50 worth of gas as he pumps it before we do and drives off with his loot of liquid gold! We leave Flagstaff and head to Holbrook. 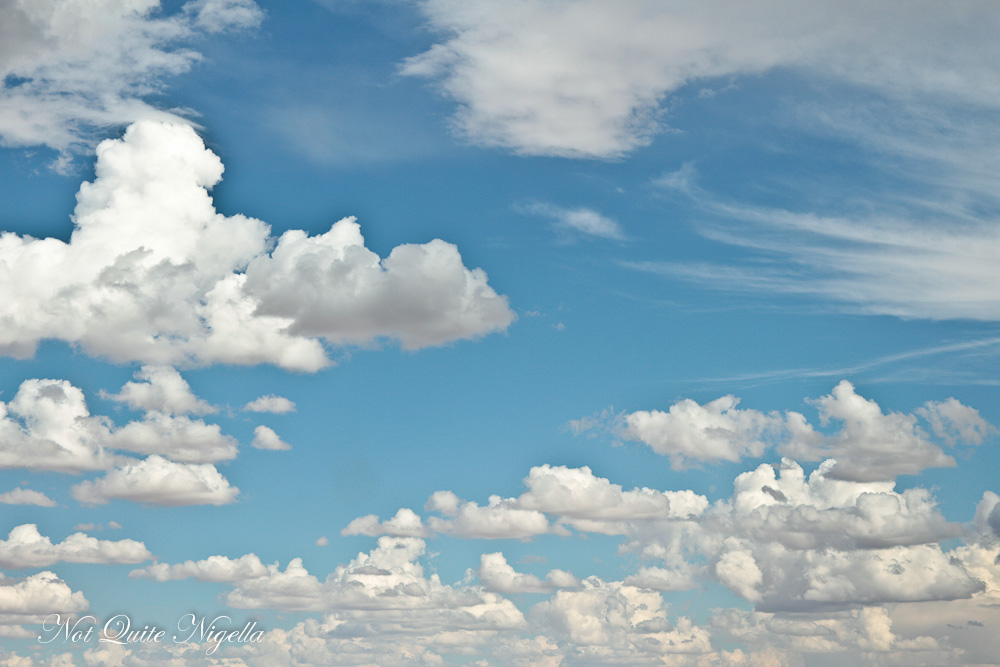 Signs welcome us onto Route 66, the historic route clearly marked. The roads are excellent, much better than the ones during the previous day and I am fixated by the cloud formations. We pass by signs like "Two Guns" and there are plenty of teepee hotels. 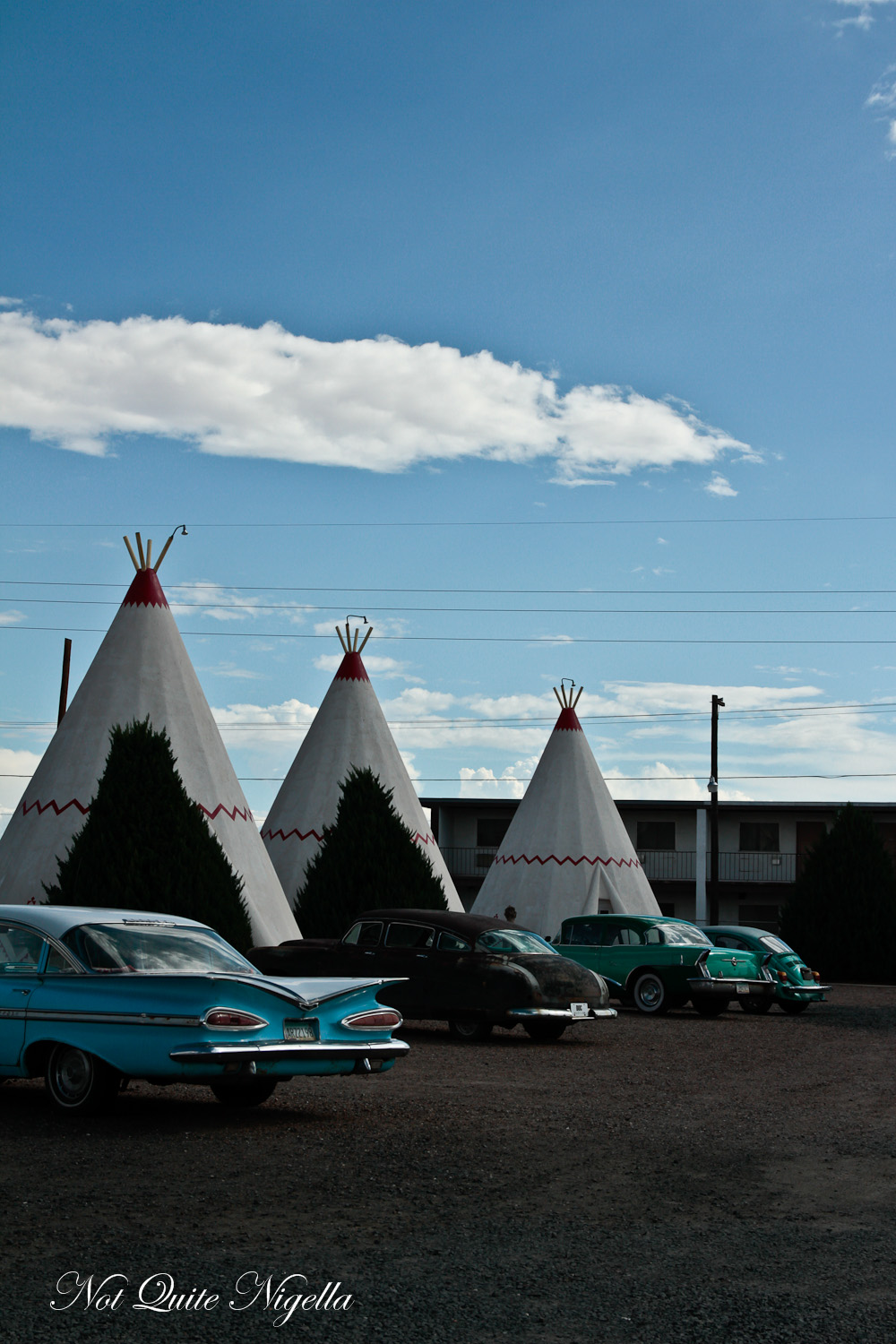 After 1.5 hours we arrive at Holbrook and pass the teepee hotel where Oprah and Gayle almost stayed. There are plenty of restaurants advertising Mexican and American food and we stop at the baby pink Joe & Aggie's where we get a warm welcome from the son in law of the owner Stanley, whose baby pink barber salon sits behind the restaurant. 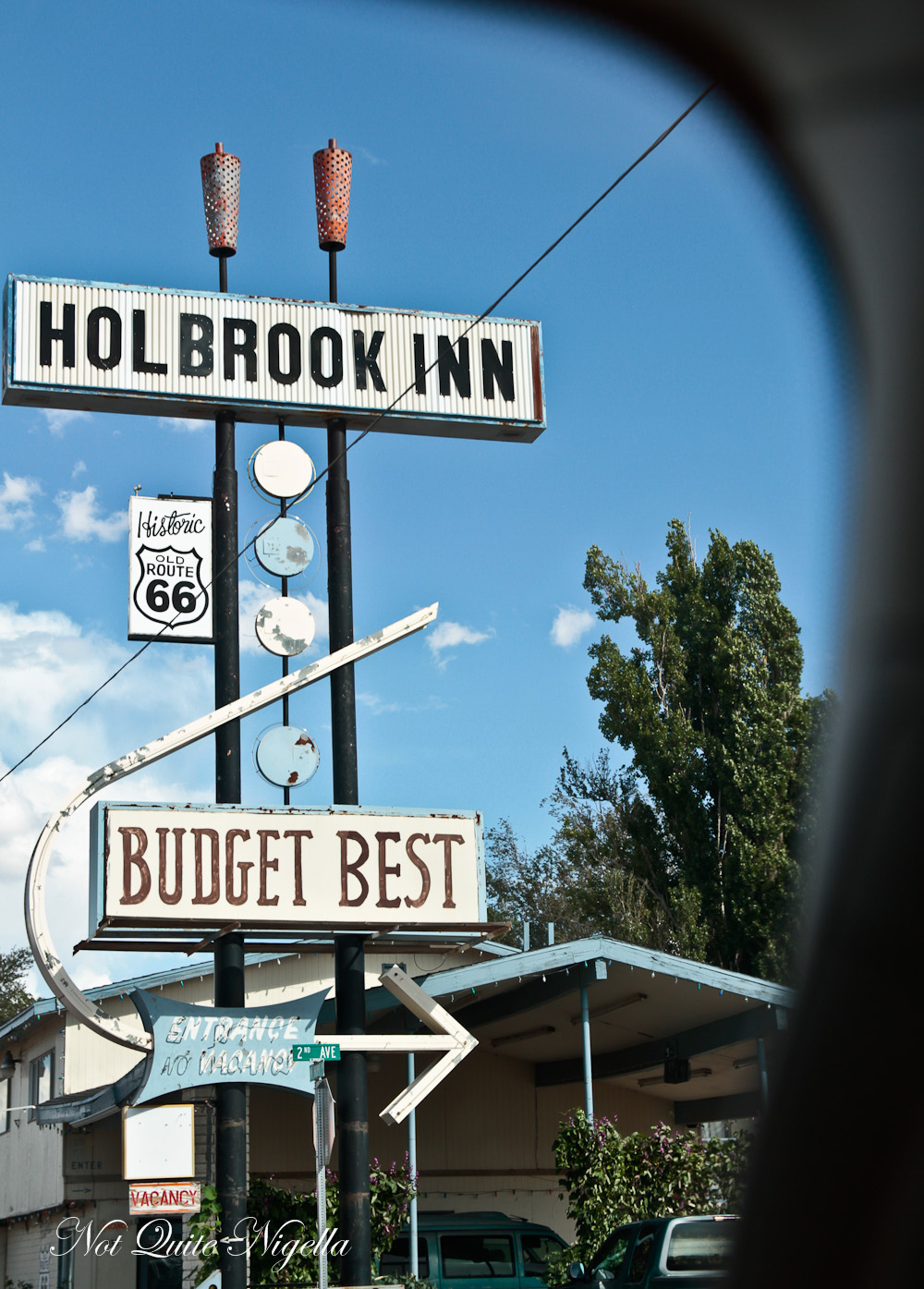 "How you doing?" Christopher asks us and we answer that we are well and ask how he is. "Any day that I wake up is a good day!" he says chirpily. We ask about the drinks. "What is the fufu soda like?" we enquire. "Not very good" he tells us laughing. Open for 70 years and started by married couple Joe and Aggie, their son Stanley runs the restaurant with the help of his extended family. 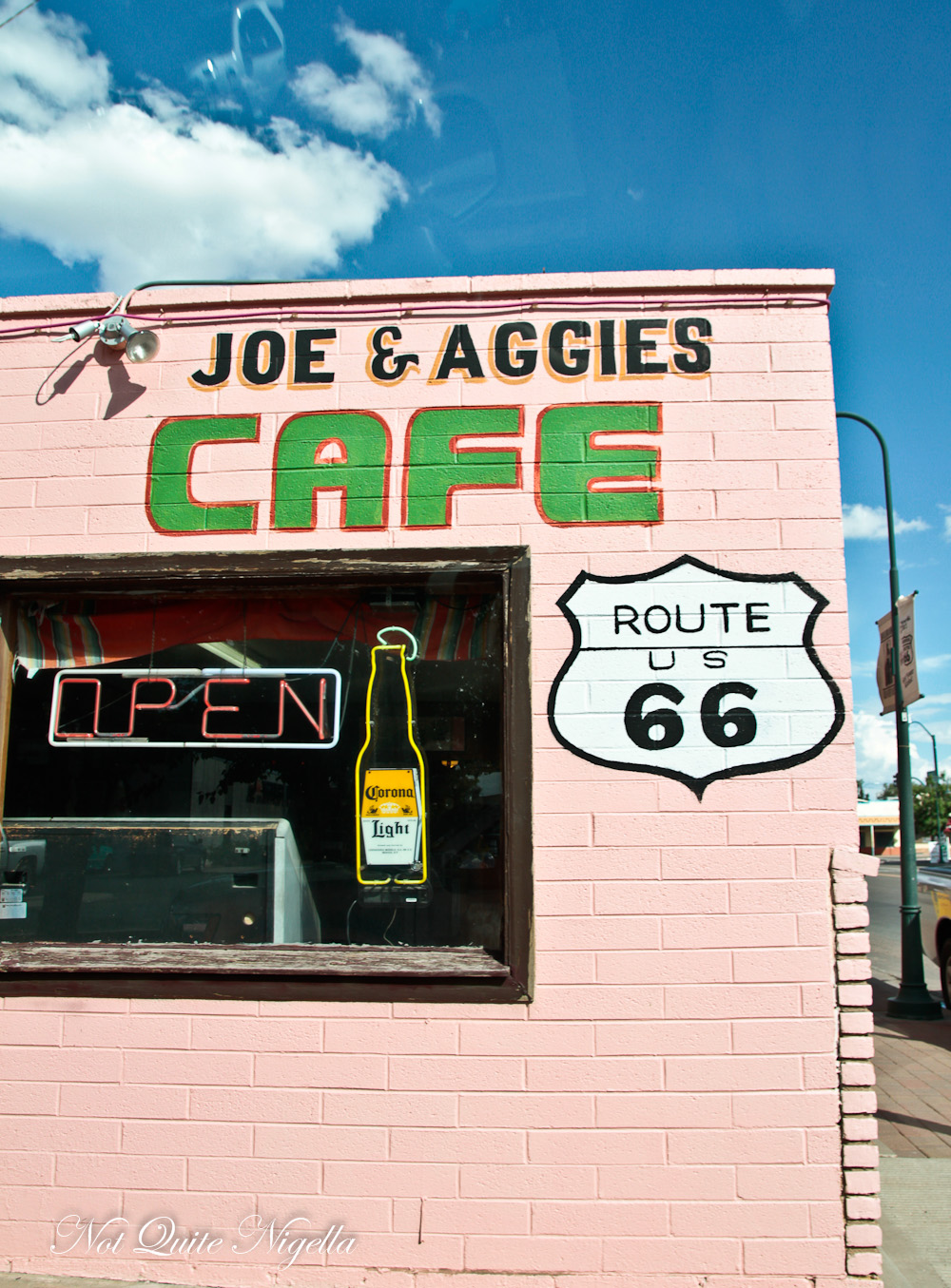 "How come you don't come over and talk to us?" a couple of older gentleman ask Christopher. There's banter between the three men which ends with Christopher telling us that if you want town gossip come in the morning where the sheriffs come and have coffee whereas the afternoon is full of what he calls the "liar's club." 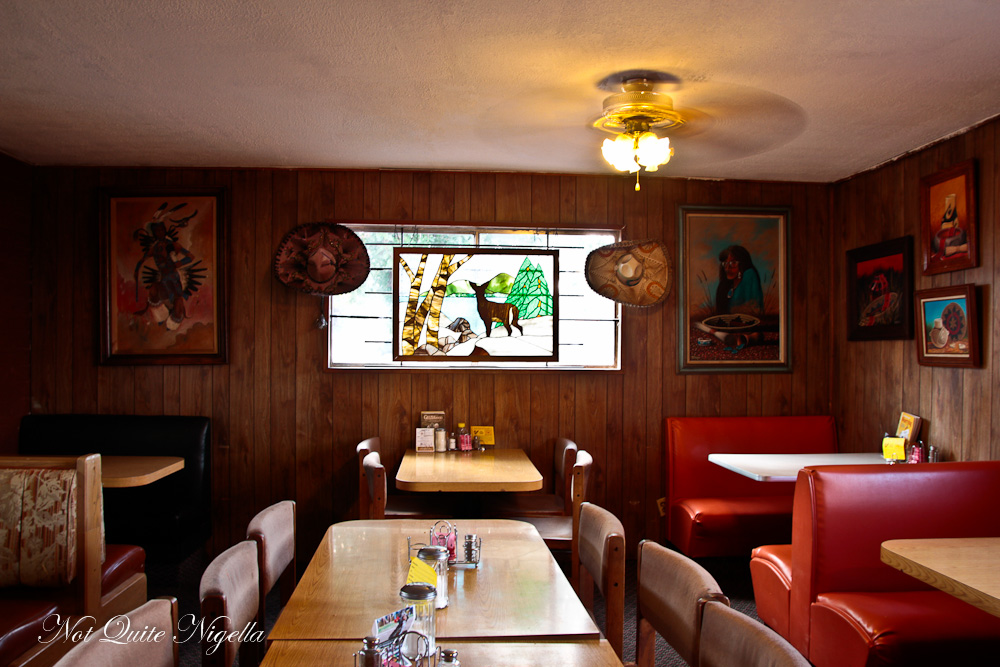 As if on cue, a man walks around to our booth. "How come nobody is sitting next to you two pretty girls?" he asks. "My father in law, the eternal flirt" Christopher says. 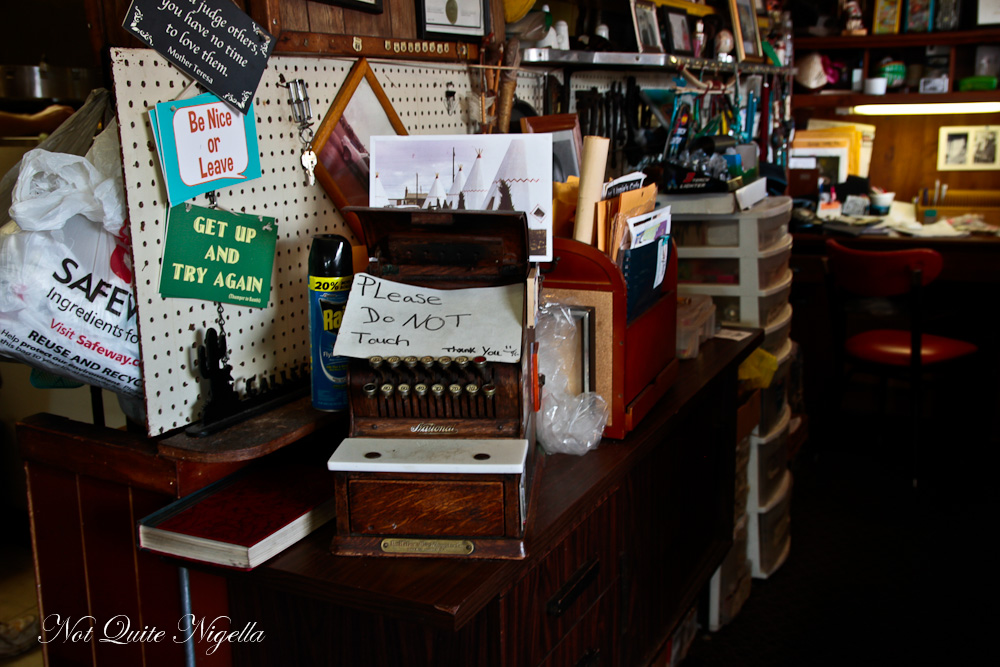 Yep that is Stanley, the ever charming Stanley, on his way to a casino. He is waiting for his friend to finish his lunch. Stanley tells us that he was born on an Indian reservation at La Sierra Blanca and has worked as a barber for the past 55 years. 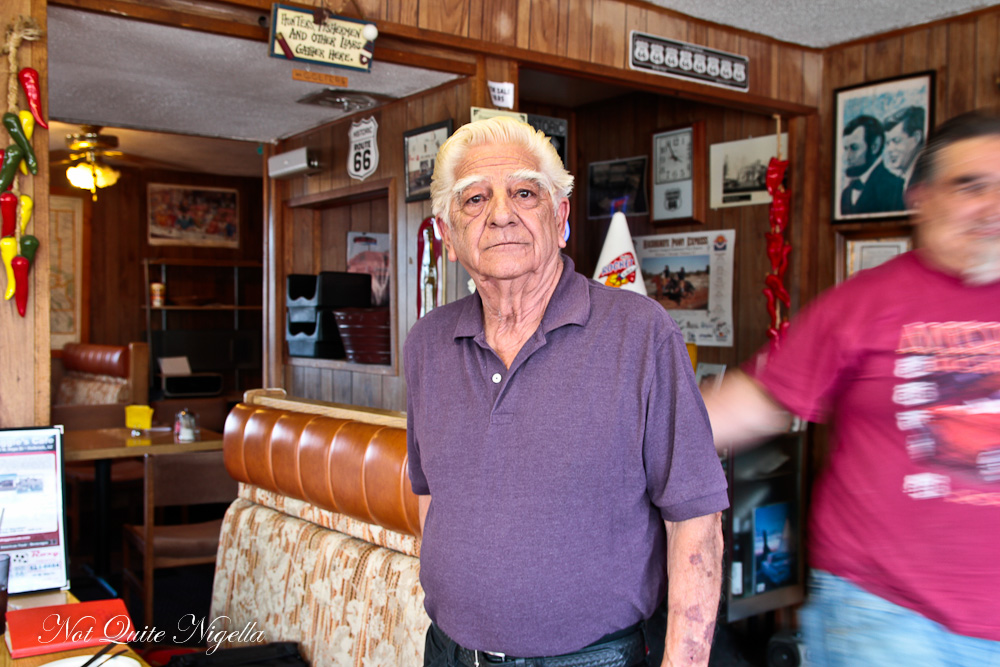 His barbershop, also coloured pink sits behind the restaurant (which was originally the barber shop). It offers men’s military cuts and flattop-style cuts for $9USD. 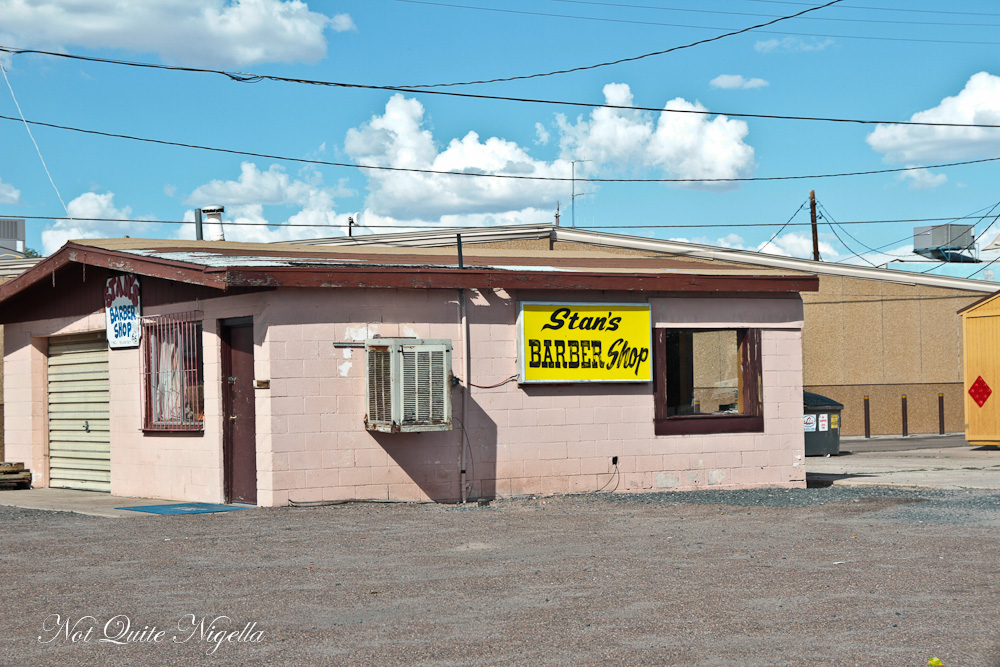 "I'm part Spanish, part Indian and part son of a bitch!" he quips. "Look at my two new girlfriends!" he tells the other patrons. Stanley was also the inspiration of the character of Stanley in the movie "Cars" and the director and friend John Lasseter sent him a display of cars to put in the glass showcase. 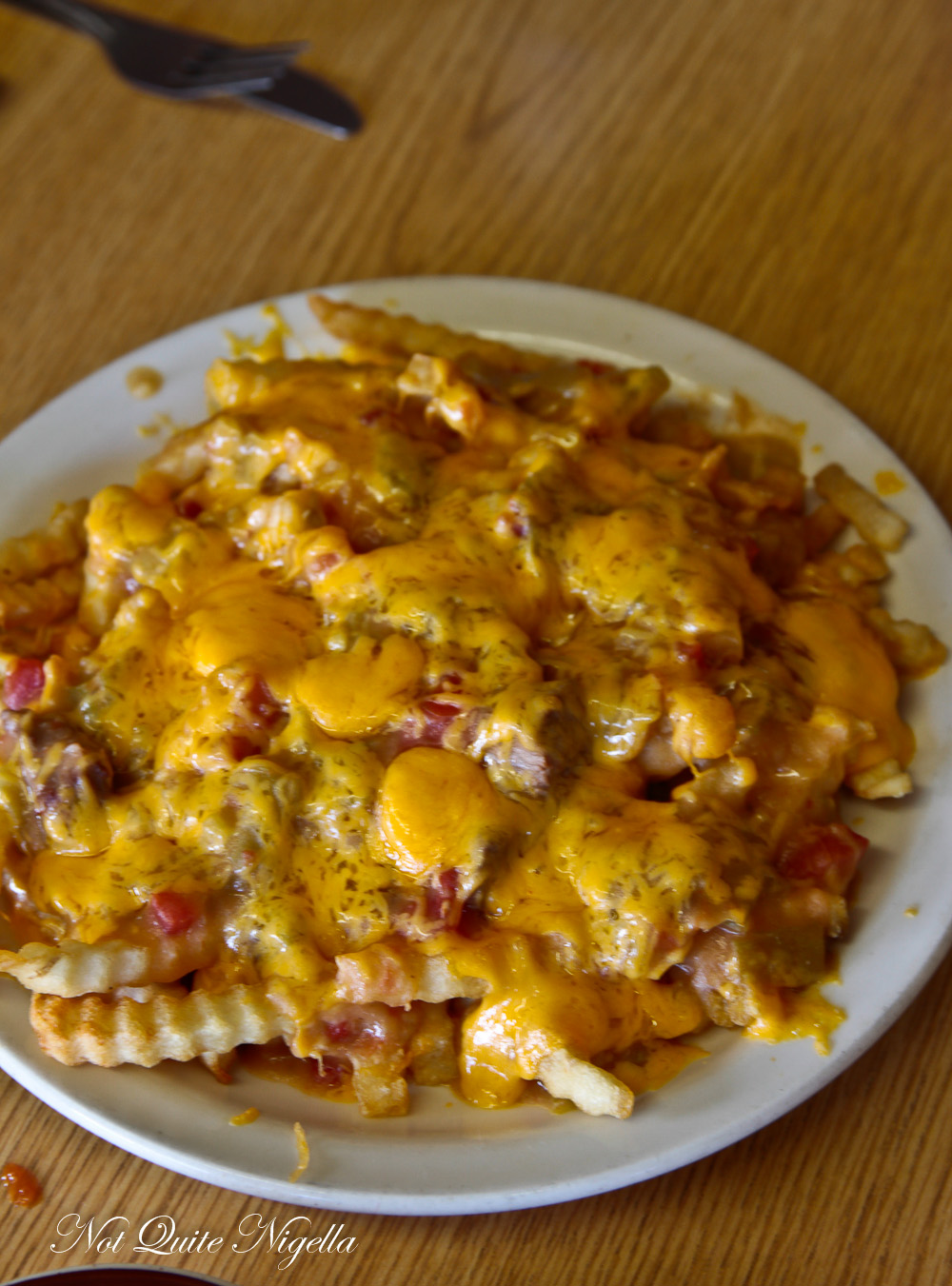 Our food arrives with the fries appearing first. They're crinkle cut (which we haven't seen in years) smothered in cheese and green chillies, the chillies most prevalent in the area that signal New Mexican cuisine. 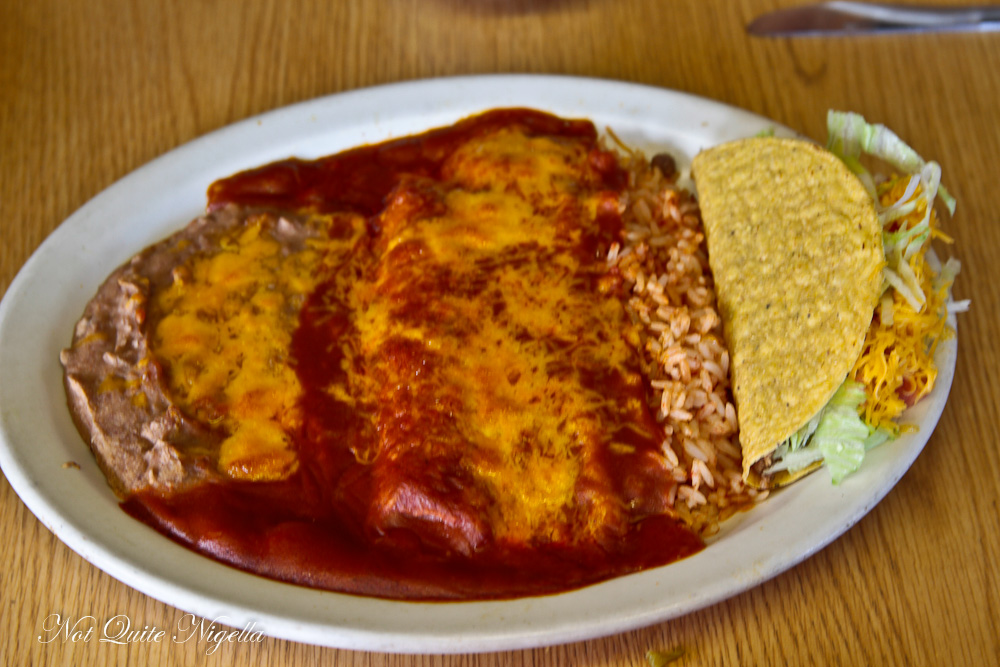 "Grandfather said the chilli cleared him out and the beans blew him out!" Christopher says and apparently he lived to over 90 years old so perhaps he was right. There's a beef mince taco, Mexican rice, beef enchilada and some refried beans. 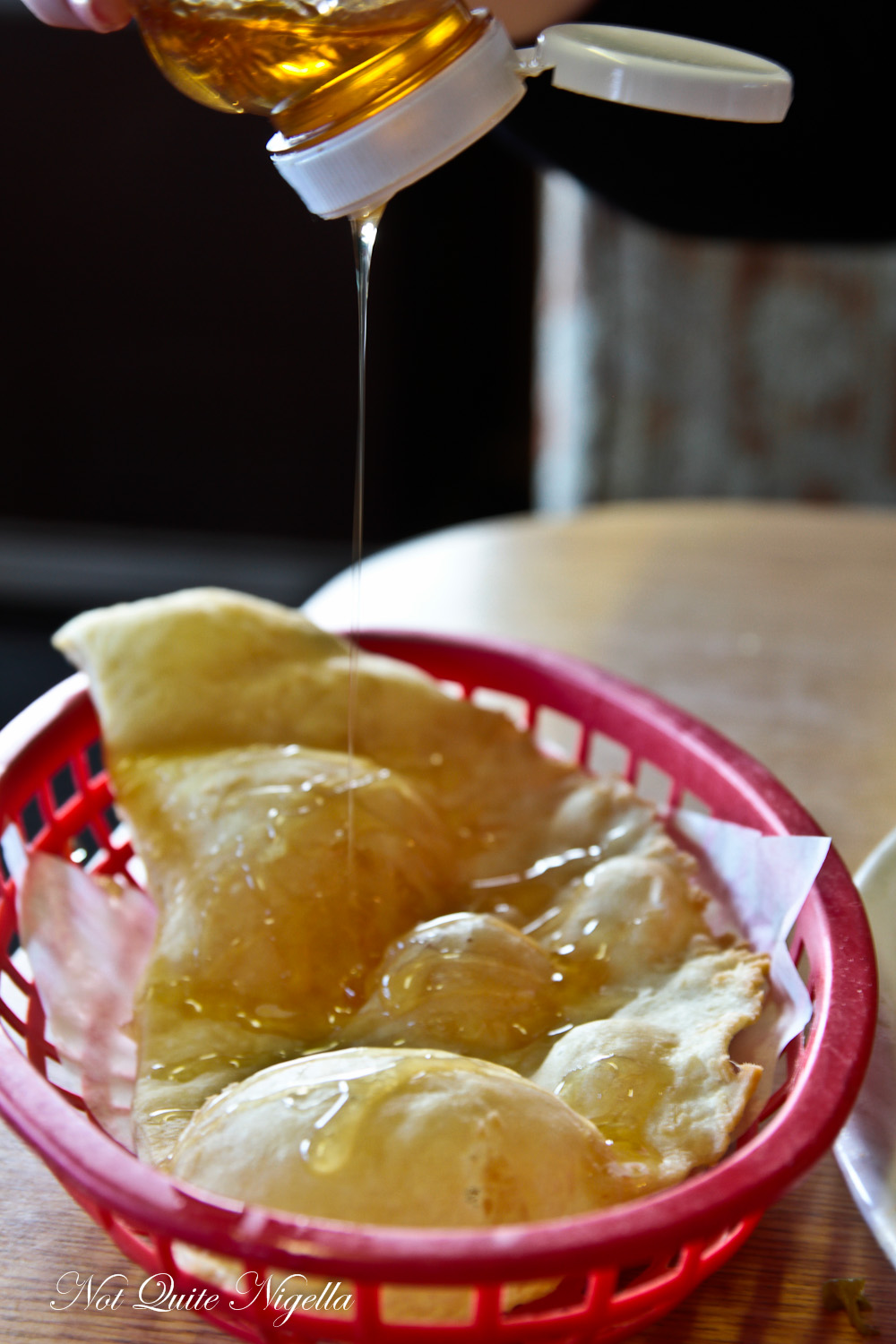 "If you don't get your elbows stuck on the table, you're eating it wrong" Christopher tells us. The sopapilla is made from a simple wheat flour and baking powder dough and deep fried and you are meant to drizzle it with the desert blossom honey on the table. And it is amazingly good-soft inside and sweet. 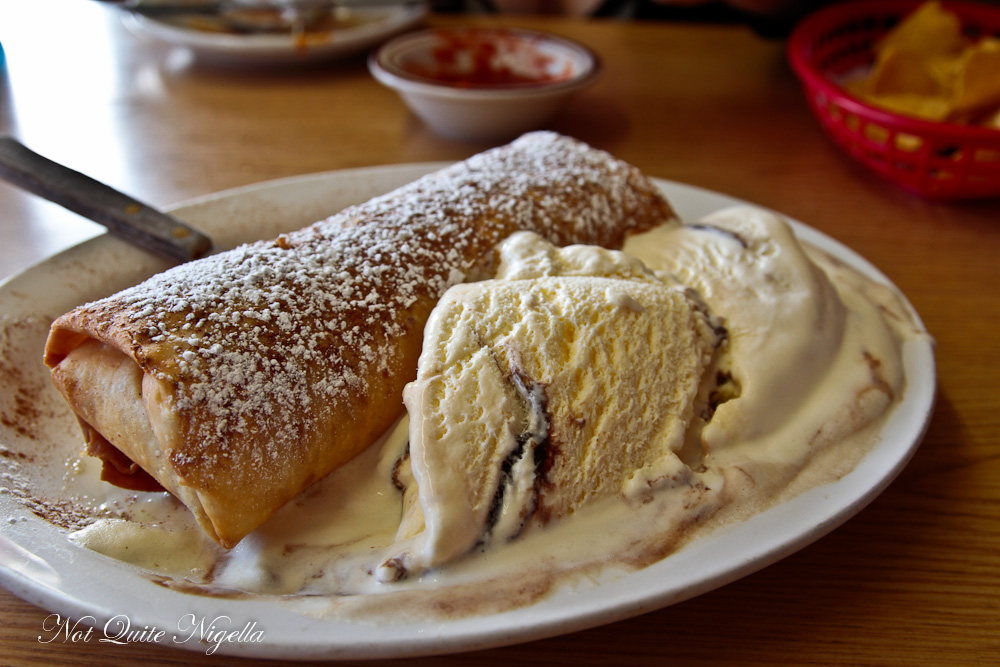 We had no idea that the burro or sweet burrito would be this enormous. It comes as an enormous serve with a burrito wrapped about a tinned peach filling with lots of peaches and thickened sauce. There's a generous portion of ice cream streaked with chocolate on the side. I prefer the deep fried edges over the fruit and just marvel at its size. Billy Connelly apparently devoured an apple version during his visit several years ago. 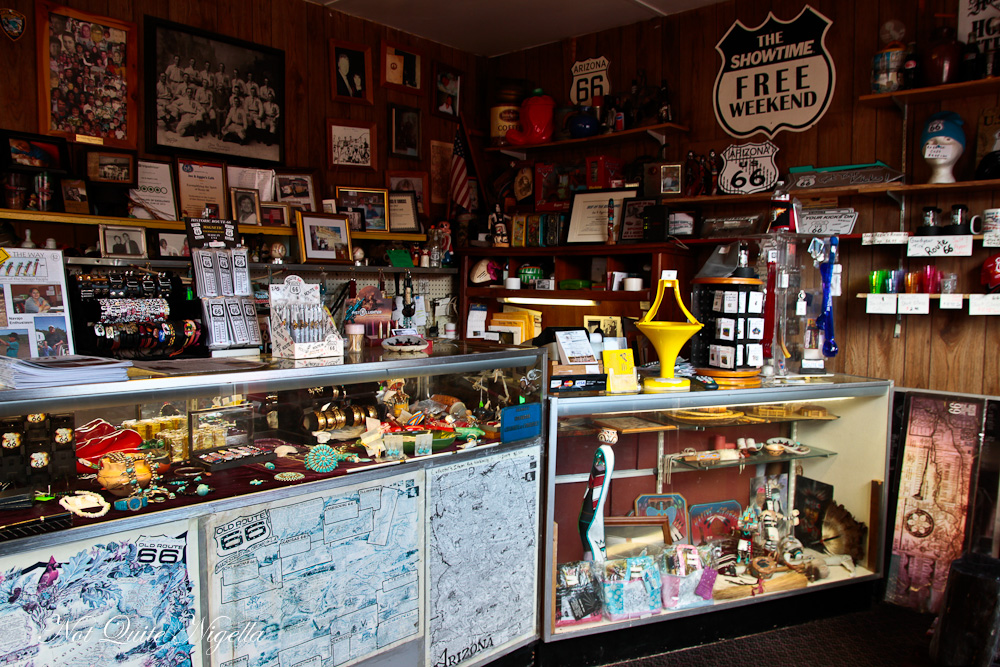 "Hurry up old man!" Stanley tells his friend, eager to get to the casino. But not before a photo and a kiss on the cheek. "I won't tell you the recipe for the sopapilla unless you go out with me" he says and then his friend, having finished lunch comes over "You want to forget him and go with me?" he asks. "At my age, I don't worry about anything" he says and they both leave laughing. 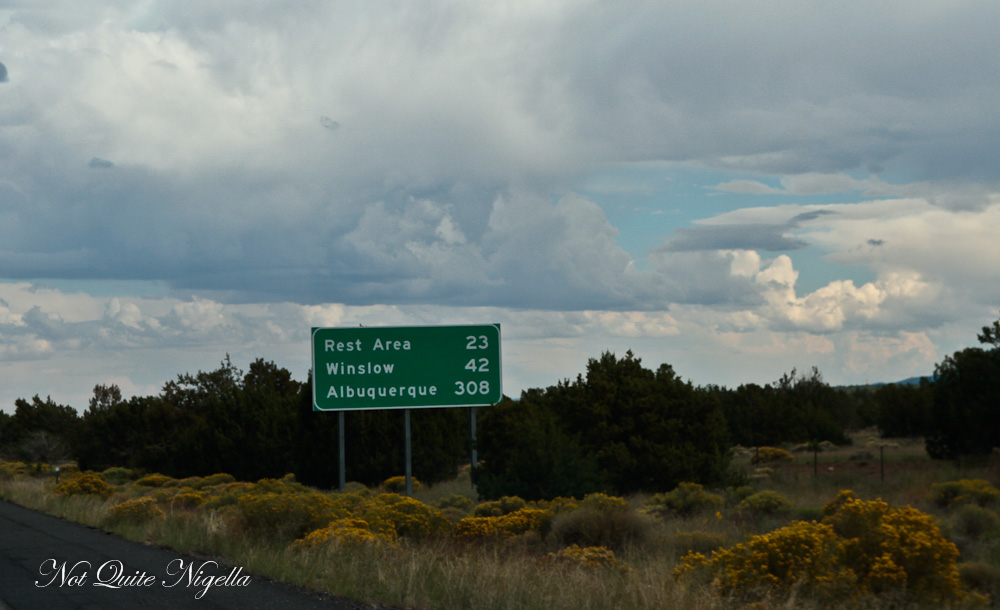 We're in for a long stretch of drive to Albuquerque next with about four hours to go. We watch as the seemingly endless long road is bordered by flat plains. Belinda has gotten the hang of driving "the beast" (aka the Chevrolet Tahoe) and we're now overtaking people. We pass signs like "Manila Wash" and wonder what washes are. One of the most photographed signs is a sign for Jack Rabbit "Here It Is" and it appears to be in the middle of a deserted junkyard. 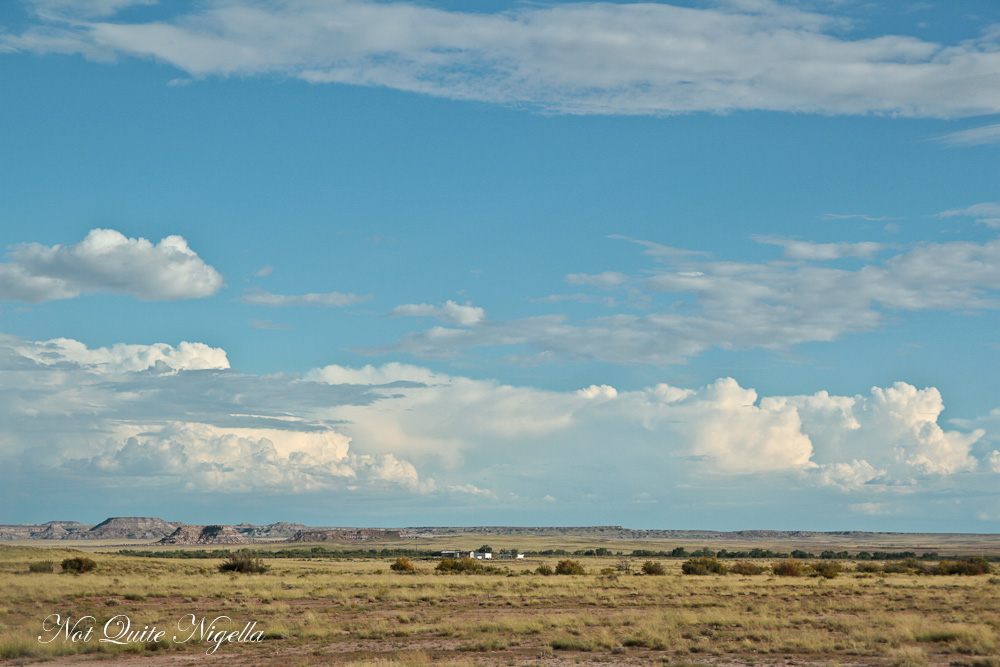 We stop in Gallup for a detour into Walmart and to get a SIM card from Radio Shack which will give us comfort that we will be contactable. At the Radio Shack we encounter a clerk who is sweet but quite thrown by our request. "The thing is..." he prefaces every sentence with and we watch as another customer enters carrying his mobile phone in a gun holster. It takes about an hour to get my SIM card.

The Walmart stop was to look for a stun gun for protection. We suspected we would be the only people without a gun in the South yet neither of us have ever fired a gun so a stun gun would be the next best thing for two girls in an unfamiliar country. We leave with some strange snack foods, Halloween goodies and drinks. And no stun gun because while they sell assault rifles and deer hunting equipment, there are no stun guns. 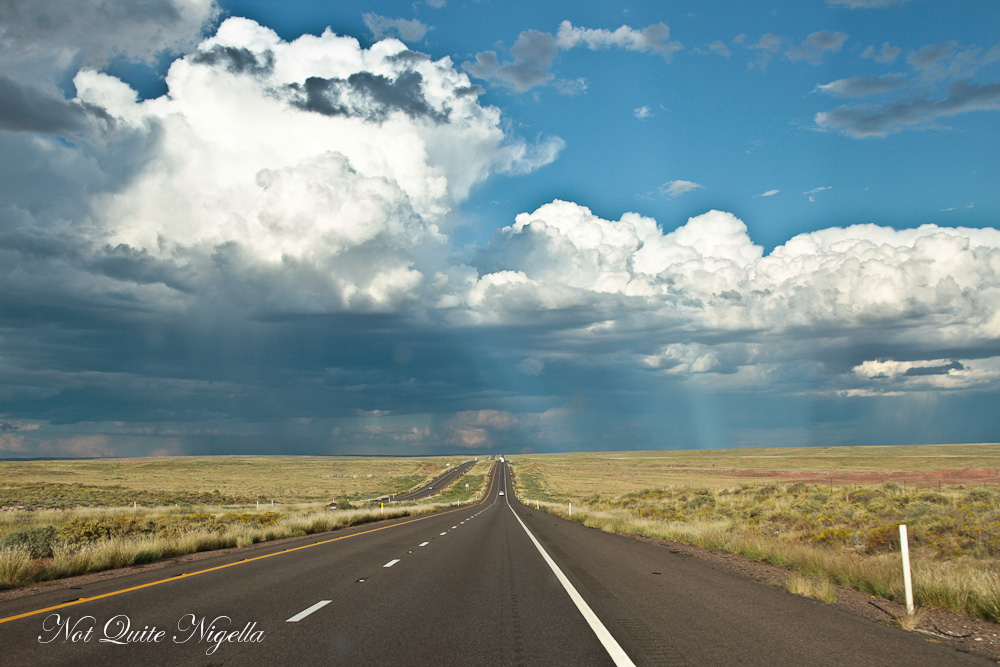 Our ride is punctuated with ghost stories and laughter over the ridiculous lyrics of songs like Prince's International Lover. Five hours later we arrive at our next destination: Albuquerque!

So tell me Dear Reader, have you ever driven on Route 66? And would you feel as if you needed some form of protection when travelling through the South or not? Have you ever fired a gun? 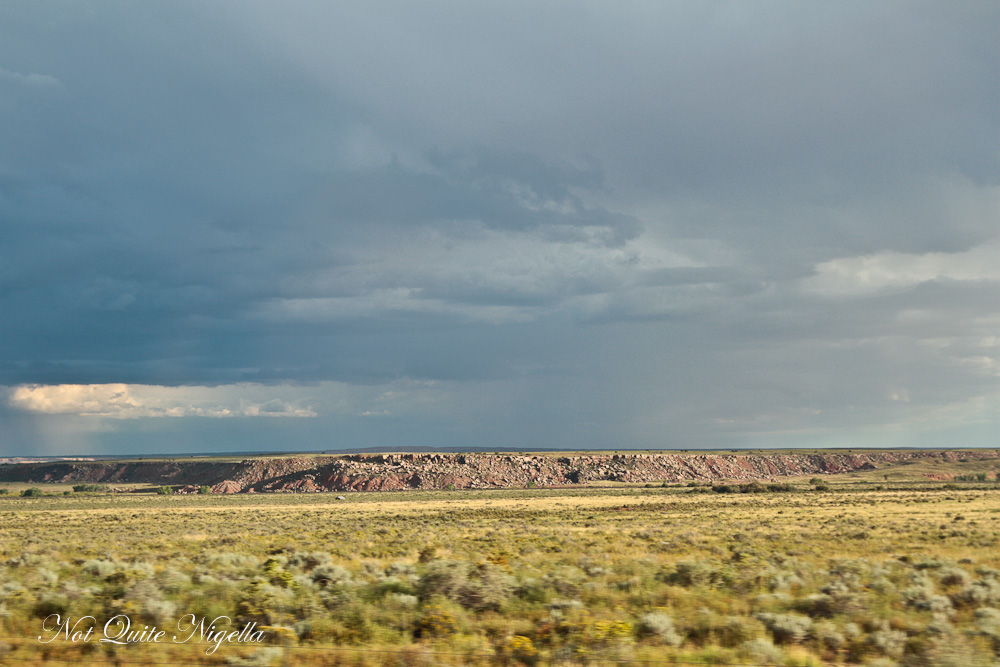