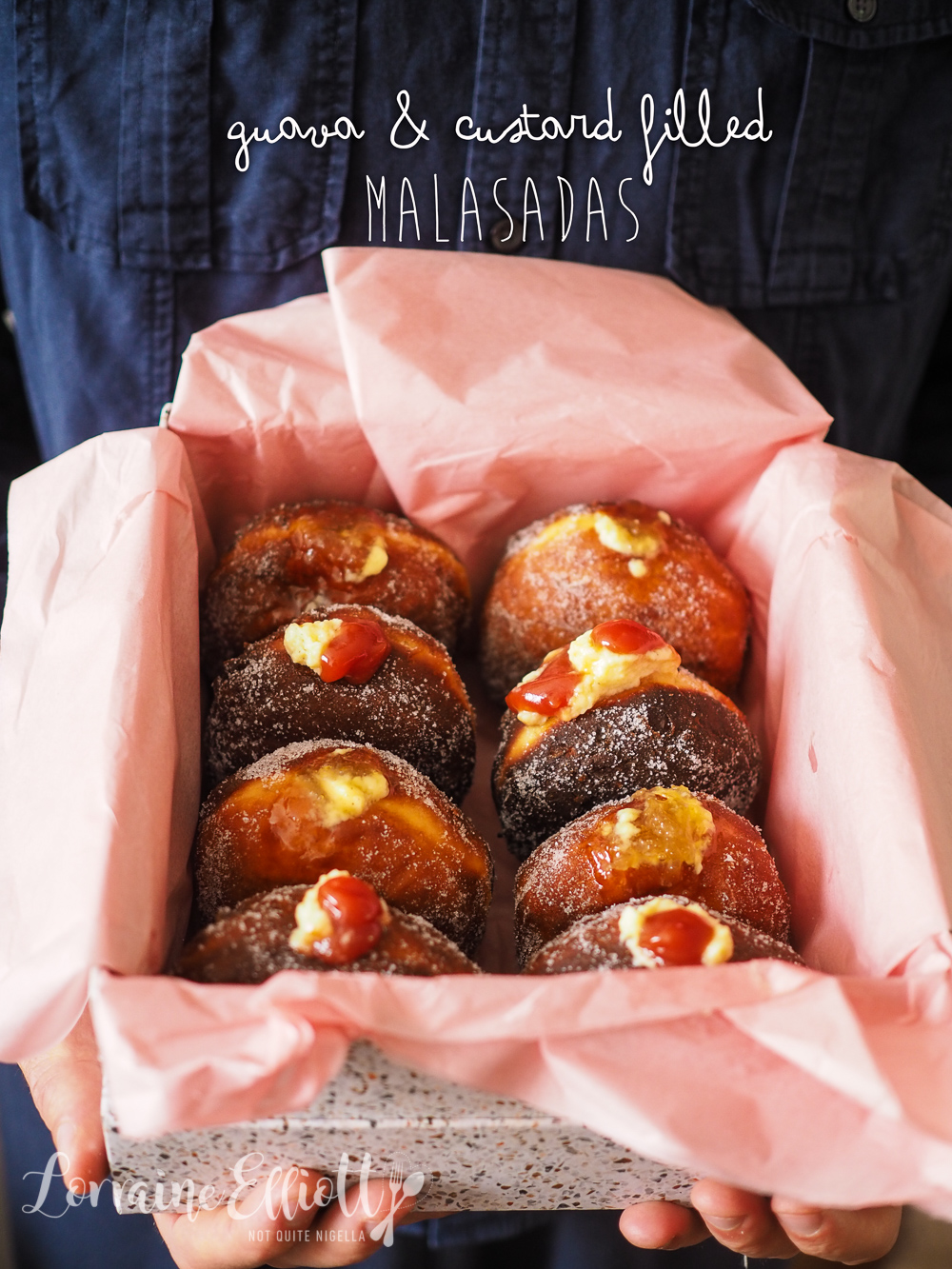 These Malasada donuts are simply amazing! Not being able to travel overseas is a challenge but you can get your Portuguese or Hawaiian fix with these home made Malasadas. Fill them with guava jam or lilikoi aka passionfruit curd and custard. Dear Reader, these are definitely a pushy recipe! 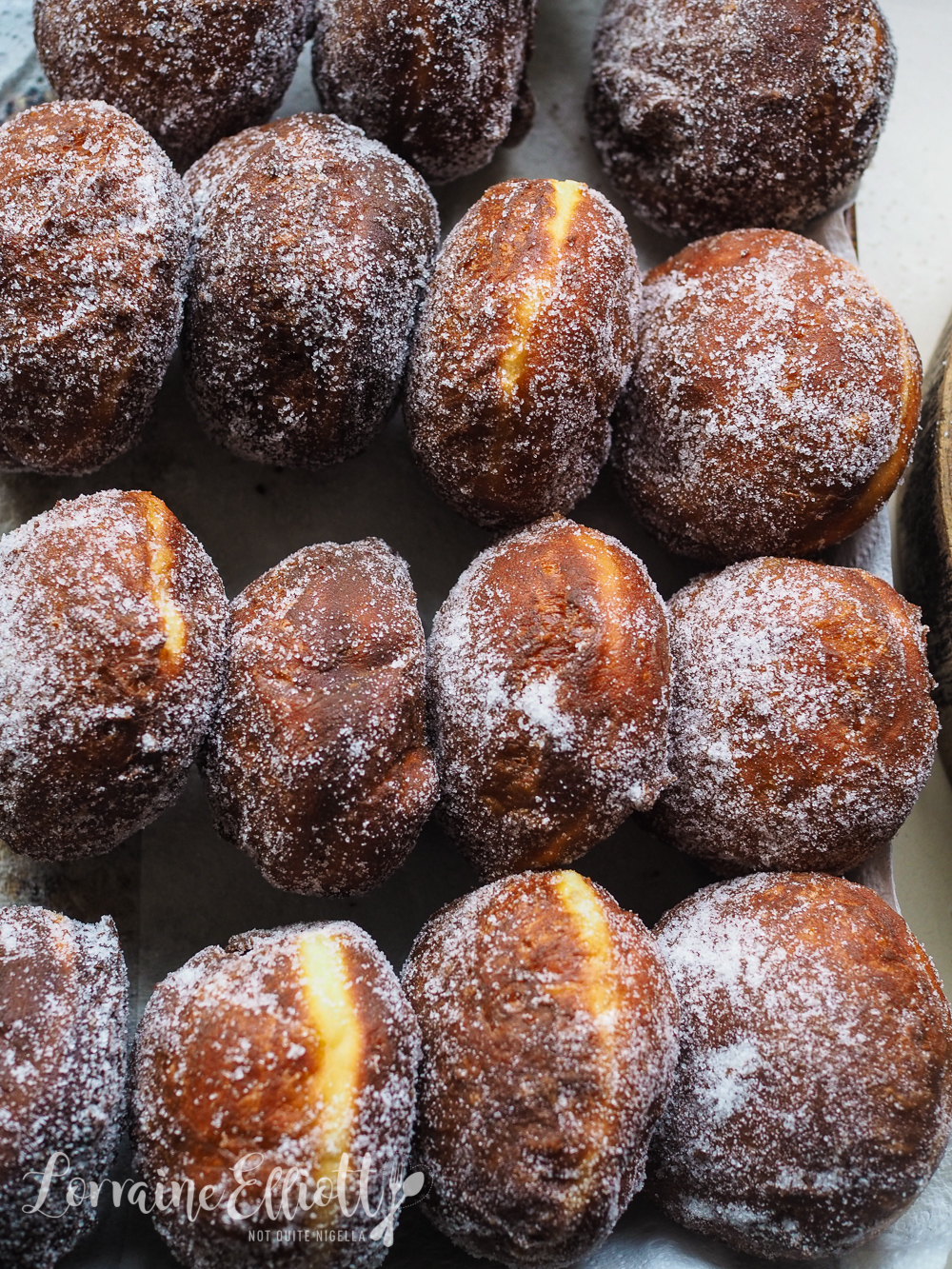 What is a Malasada? Originally from Portugal, a malasada is a yeasted donut without a hole. They are said to have originated in São Miguel and island in the Azores. The word malasada means "under cooked" and references the contrast in textures from the outside to the soft, fluffy inside.

From 1878 to 1911, Portuguese labourers went to work in the sugarcane plantations of Hawaii bringing the recipe of Malasadas with them. If you've ever been to Hawaii, the one place that everyone asks if you've visited is Leonard's Bakery who have been making them since 1953. 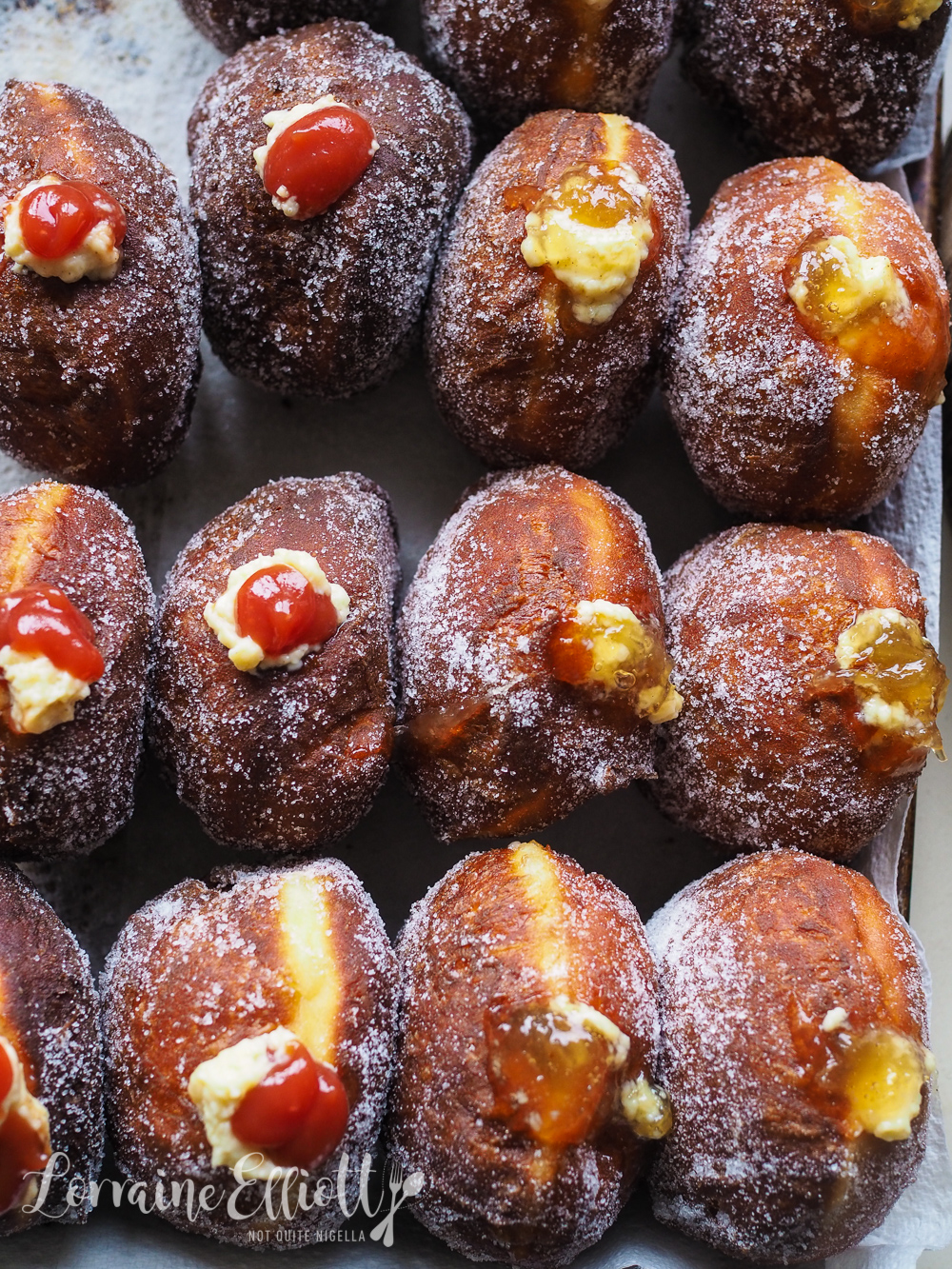 Traditionally Malasadas or Malassadas aren't filled but Leonard's Bakery sells Malasada Puffs which are the filled version. Malasadas are rich with eggs, butter and milk. They're popularly eaten on Fat Tuesday or Mardi Gras, the day before Lent as the Portuguese needed to use up sugar and butter before this day.

Malasadas vs other filled donuts: Berliners are filled German donuts, Munkkis are filled Finnish donuts, Bombolini are filled Italian donuts and all are very similar. The difference with the Malasada is the amount of eggs in them. Malasadas have more eggs and a bit more butter which makes them distinctly yellow inside and like a brioche. They are impossibly light and delicious and out of all of these types, malasadas are probably my favourite donut.

Hate deep frying? I hear you! I hate it too but if you're worried about spitting oil there isn't any because it's a bread dough. Usually food with water in it causes the oil to spit but you're safe with frying these donuts.

Which oil do I use for deep frying malasadas? According to a recipe online, Leonard's Bakery uses canola oil.

Keep the oil temperature steady when deep frying: You want your donuts to have a gorgeous golden colour and be cooked on the inside. To do this, keep your oil at 180C/350F when you are deep frying. I check on the temperature with an infra red temperature gun with every batch. Cook them for 2 minutes on each side at 180C/350F and they will be perfect. If you make the donuts bigger or smaller you will have to adjust your cooking times. 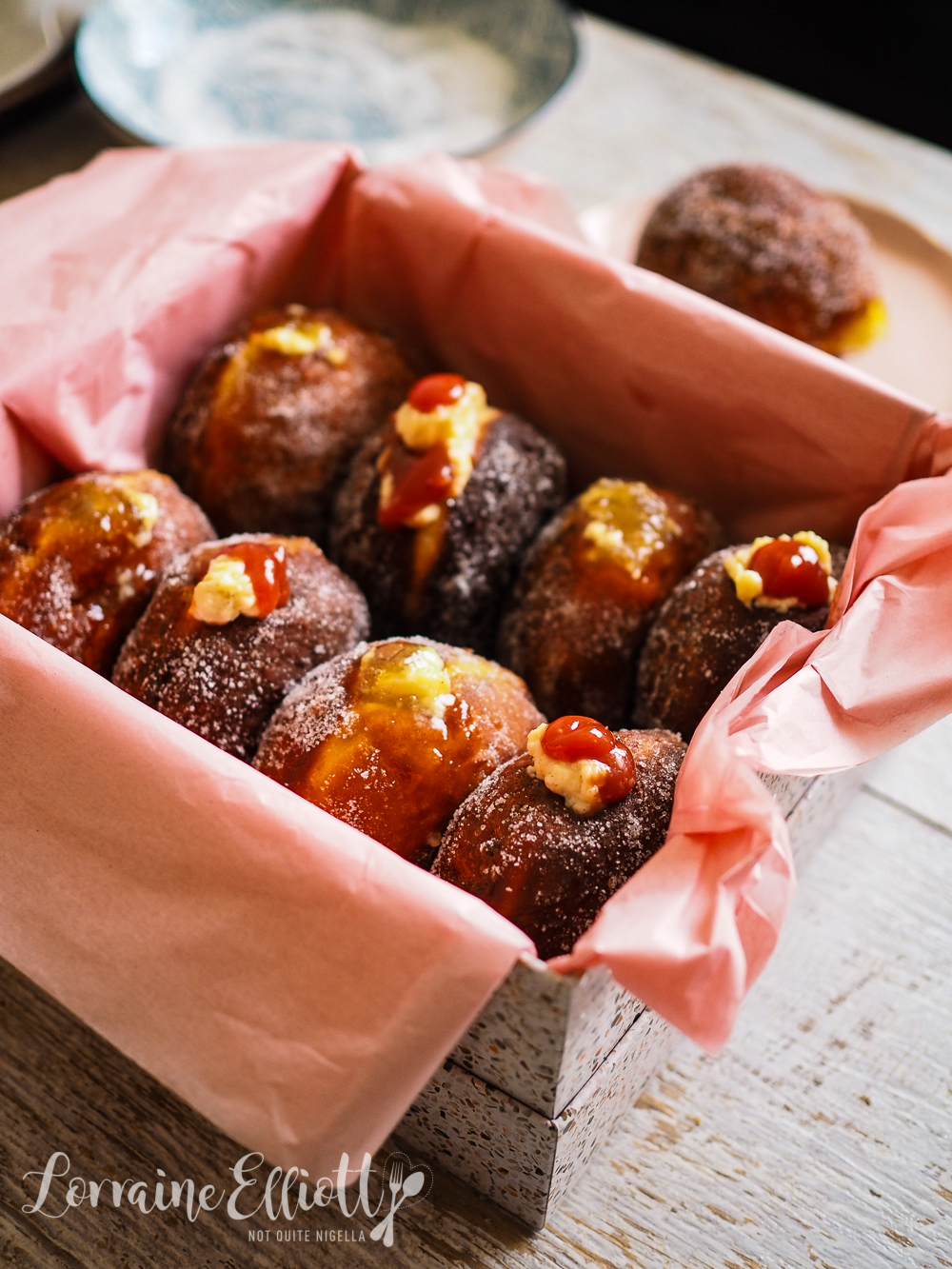 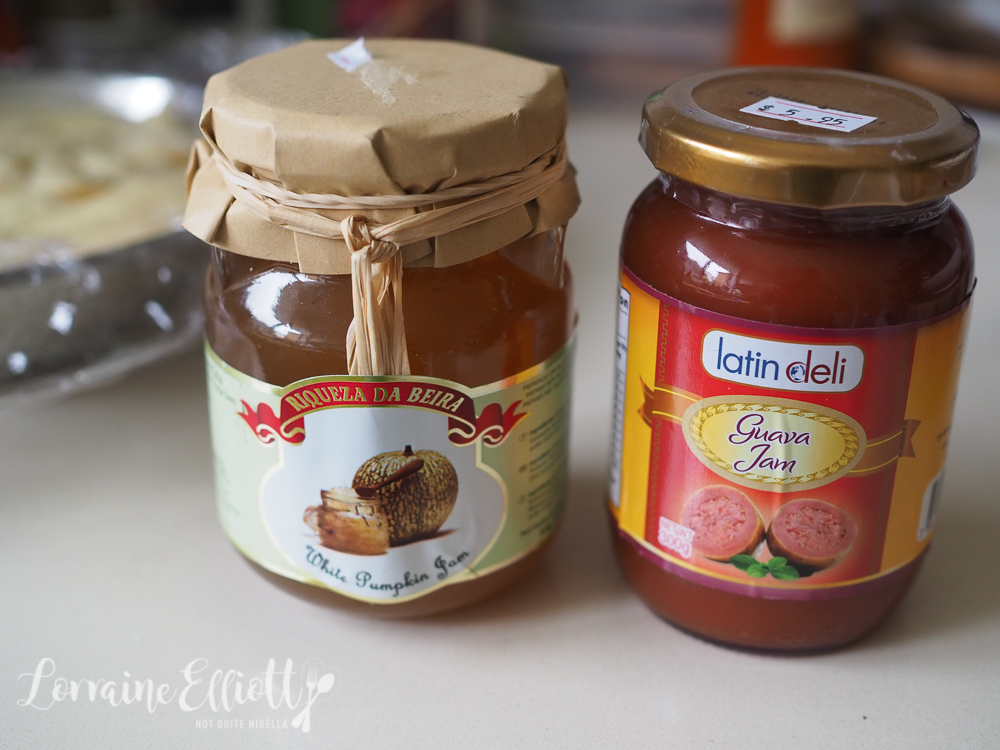 Fillings for your malasadas: You can of course eat these malasadas plain and they are absolutely delightful just rolled in sugar. But I've never refused a filling and my favourites are a combination of Portuguese and Hawaiian. I used a guava jam and a white pumpkin jam that I bought from a Portuguese deli and they were just incredible when combined with the vanilla custard.

Crème Pâtissière or Vanilla Custard: your custard needs to be a bit stiffer than a runny custard so that it stays in the donut and doesn't run out. Crème pâtissière or pastry cream thickened with eggs and cornflour gives you the perfect consistency for filling these malasadas.

How to Fill a Malasada: I put the jam in one piping bag with a small plain tip and the custard in another. I squeezed in some jam, then the custard. Fill them until you start to feel the custard starting to push back - the more filling the better the donut. Then pipe in a little jam so that you can tell which donut has what filling (if you're making multiple flavours).

I made these for a party at my friend Valentina's. 18 donuts was too much for Mr NQN and I to eat. The pressure was on for this party and it was all self inflicted. You see the party guests were the same people that I served up my biggest food disaster ever to just a few weeks prior with the runny custard tart aka #custardgate. I was worried that they'd think that I couldn't cook. I mean what sort of food blogger can't make custard? It's like not being able to boil an egg.

After the custard incident I swore that I wouldn't test recipes on people but you know my life is pretty much about testing recipes and that resolution swiftly went out the window. However this time I was going to actually eat a donut before serving it - a donut is much easier to sample discreetly than a whole tart.

I was so elated when I bit into the malasada! These are possibly my favourite donut recipe ever. I've made plenty of different types of donuts but these are something special. They're so light and perfectly sweet without being too much. And I felt relieved and happy to be able to take these to the party. 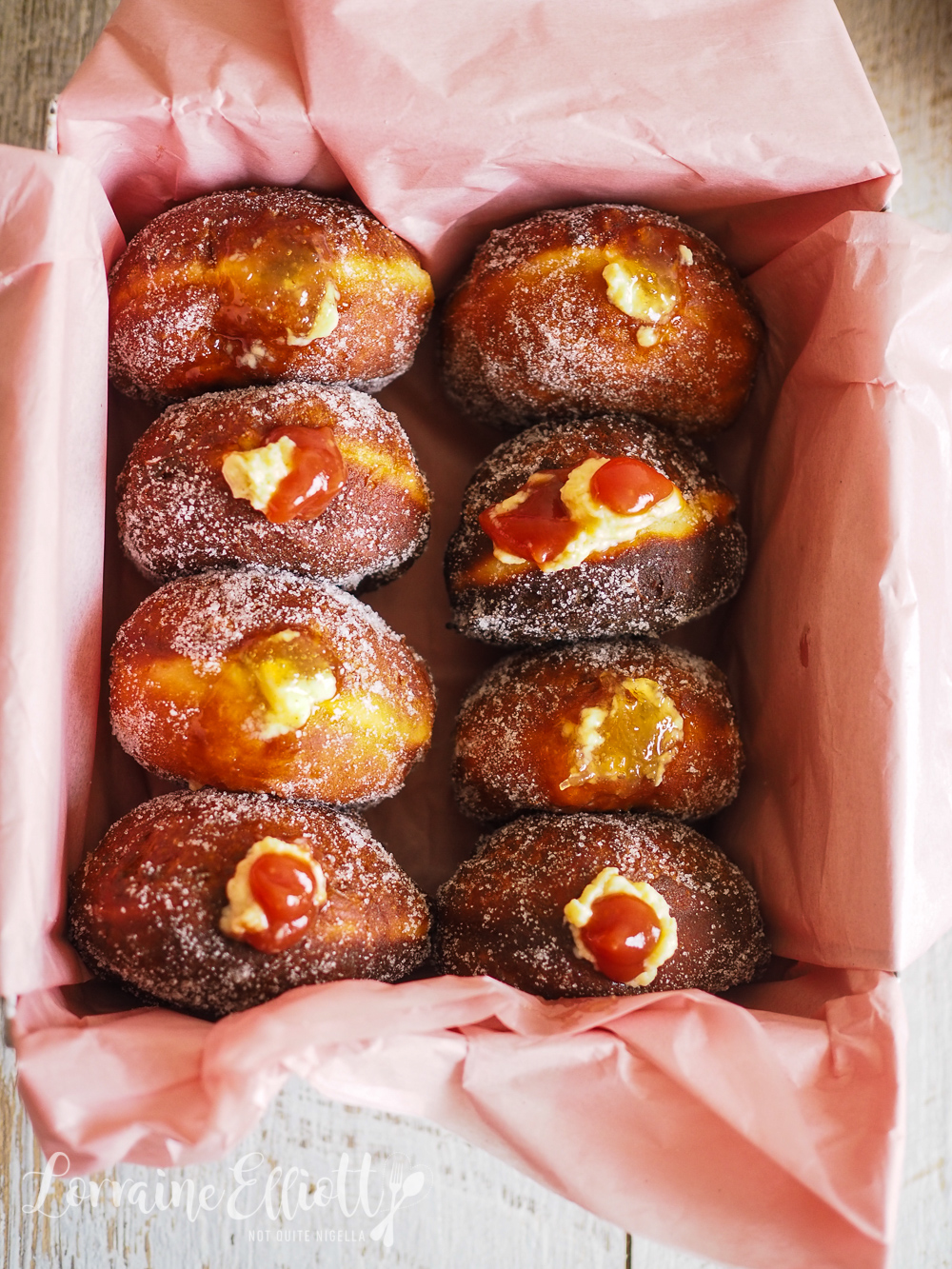 That night I explained that I was nervous about bringing food to someone at the party because I was so mortified about #Custardgate. Either they were being very polite or they had forgotten because they didn't really know what I was talking about. Or possibly I thought that I was the centre of the universe and that I was in fact not! LOL.

Of course if you can't have a party due to these crazy times, I can also recommend dropping off a little box of these malasadas at a friend's door. These donuts will brighten up anyone's day and make them feel like the centre of the universe.

So tell me Dear Reader, do you prefer plain donuts or filled ones? What filling would you make? Are you a perfectionist? Do you ever fall into the trap of feeling like you're the centre of the universe?

To Fill and Roll 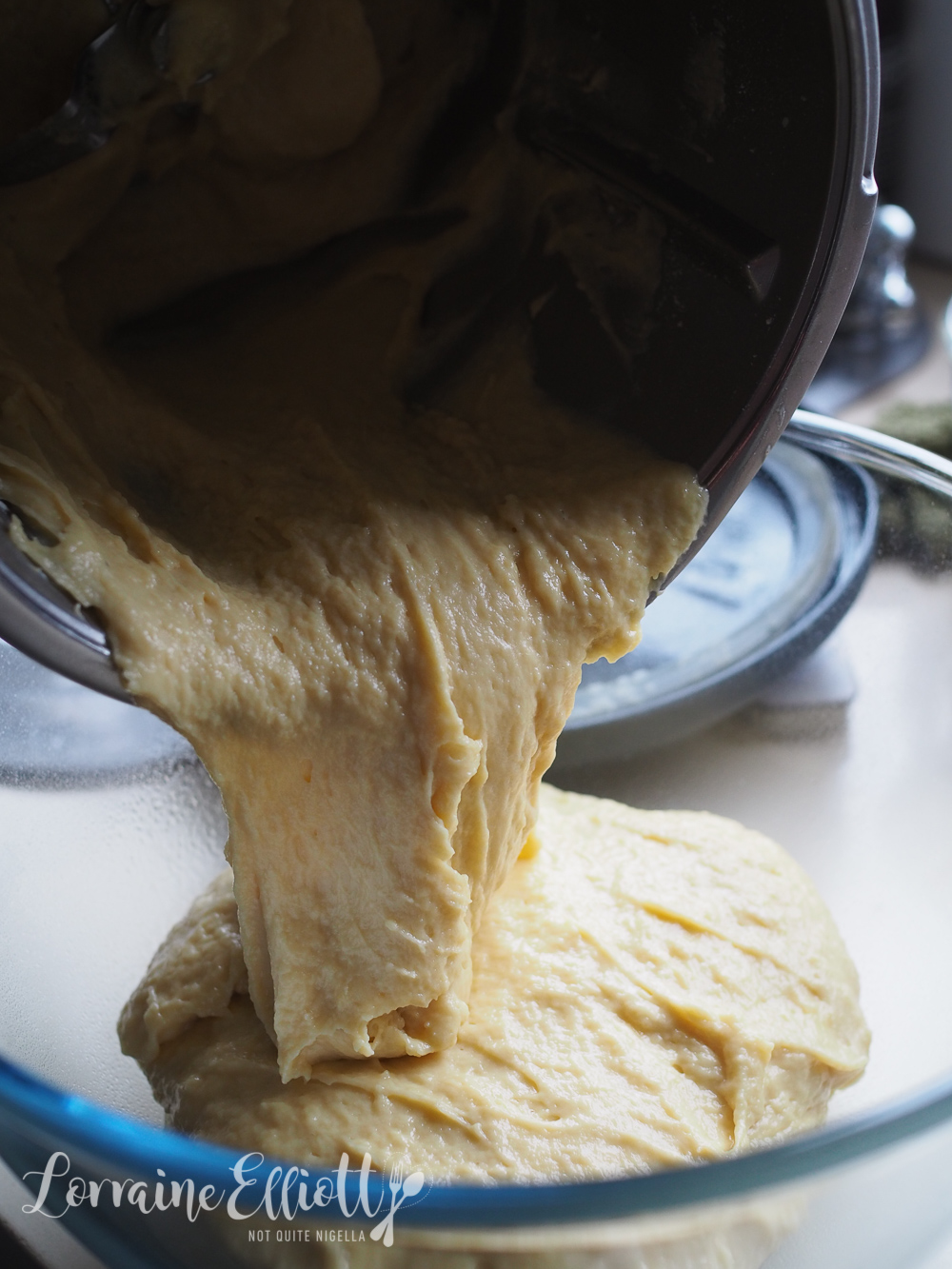 Step 1 - Heat the 30ml/1oz milk to 37C/98.6F and add sugar and sprinkle with yeast and allow to become frothy (between 5-10 minutes). Add the flour and stir and then add the hot milk, butter, eggs, vanilla and salt and knead until elastic. It will be quite a sticky dough. Place in a very large bowl (it will swell up high) and cover and allow to rise for 1.5 hours or until triple in size. 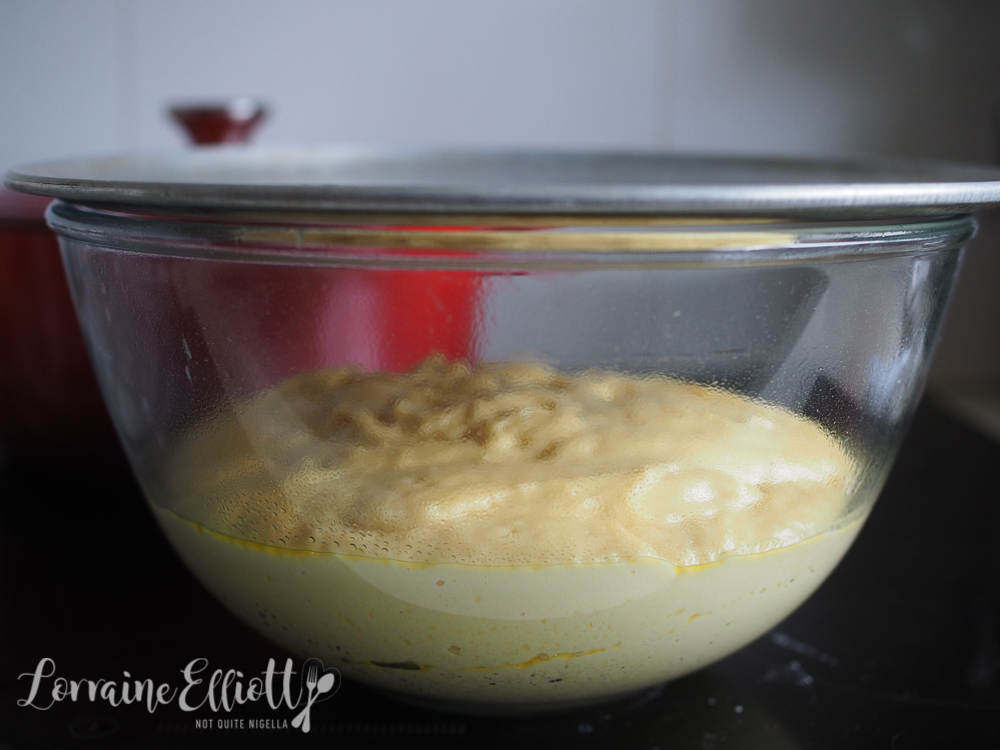 Step 2 - While it is rising, make the crème patissiere. Heat the milk in a saucepan until almost boiling. Meanwhile whisk the sugar, cornflour, eggs, egg yolks and vanilla in a medium sized bowl. When the milk is hot enough, add around a third of the milk to the egg mixture to temper it whisking while you add it. Then place the tempered egg and milk mix back into the saucepan with the rest of the milk and return to a low heat. Stir to make sure that it comes together evenly and it should take under 5 minutes to get a thick custard. Place in a bowl and place cling film on top touching the surface so that a skin doesn't form and cool completely. 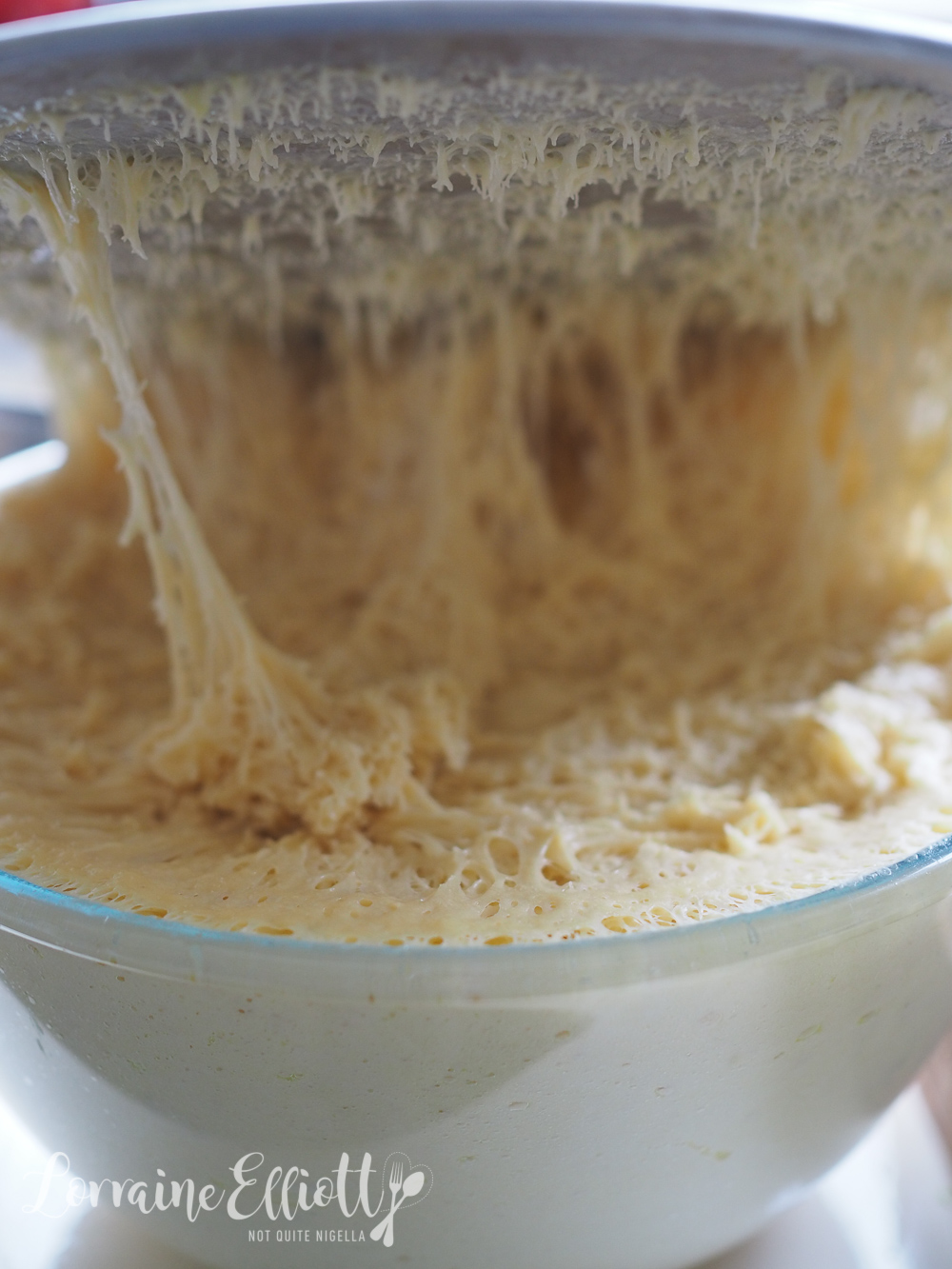 Step 3 - Punch down the dough when it is ready and flour a surface and roll the dough out until an inch thick. Cut out rounds with a 6cm/2.4 inch cutter placing them apart about an inch and allow to rise for 30 minutes. 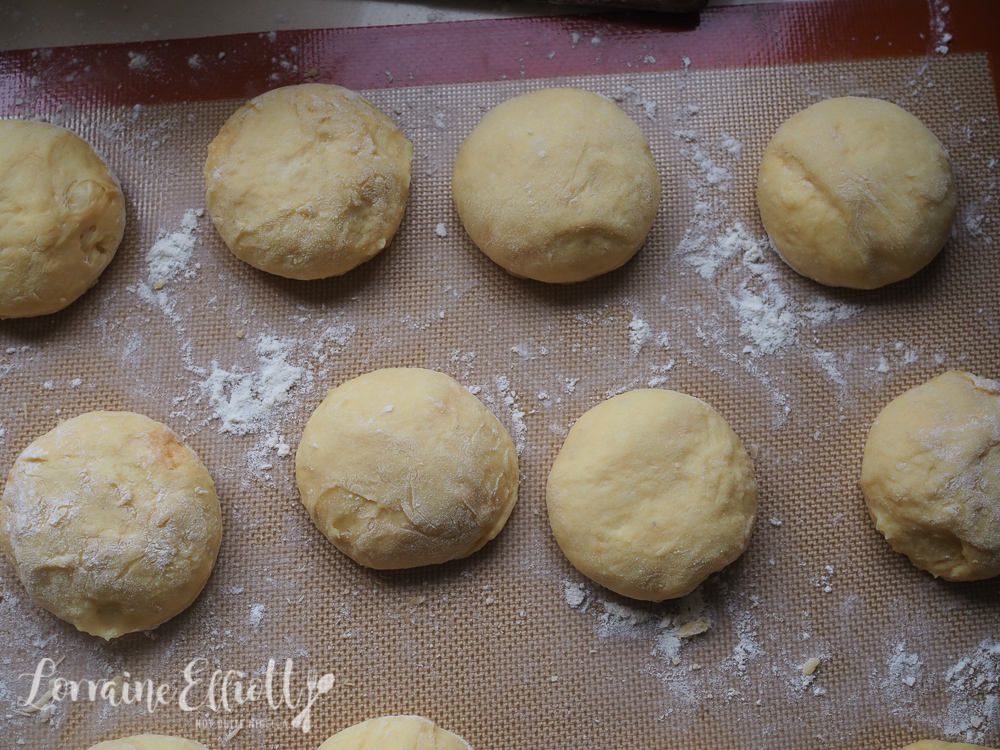 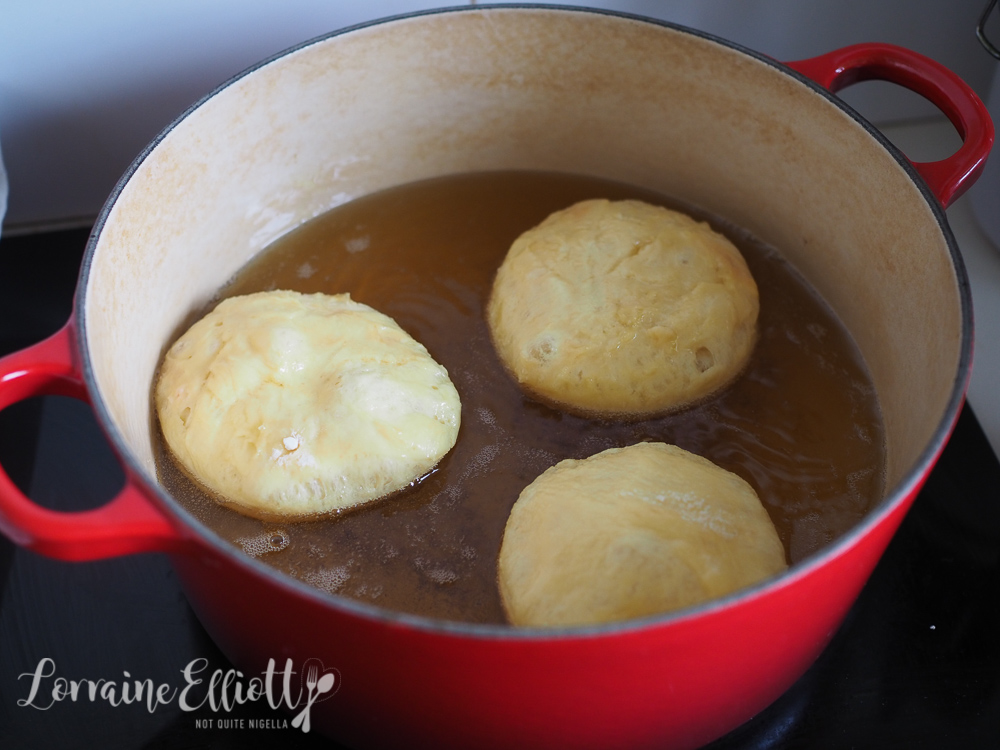 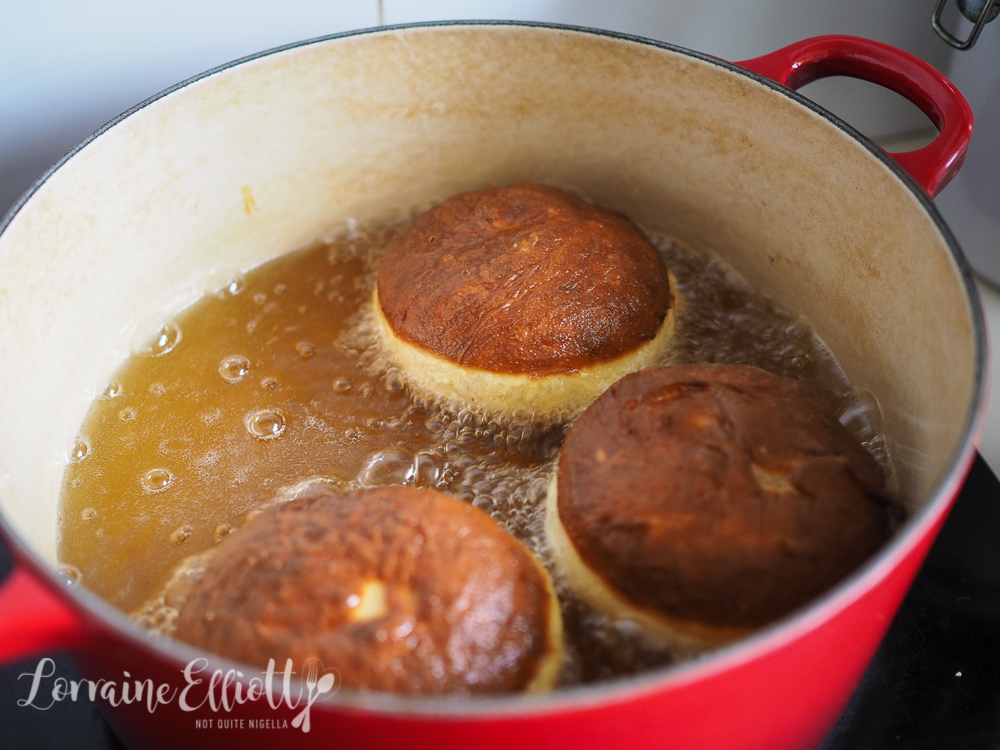 Step 4 - Heat oil to 180C/350F in a large pot and add three donuts at a time to the oil. Keep checking the oil temperature and adjust it up and down to keep it at 180C/350F. Place on a double paper towel lined tray and allow to rest for a few minutes before rolling in the extra sugar. 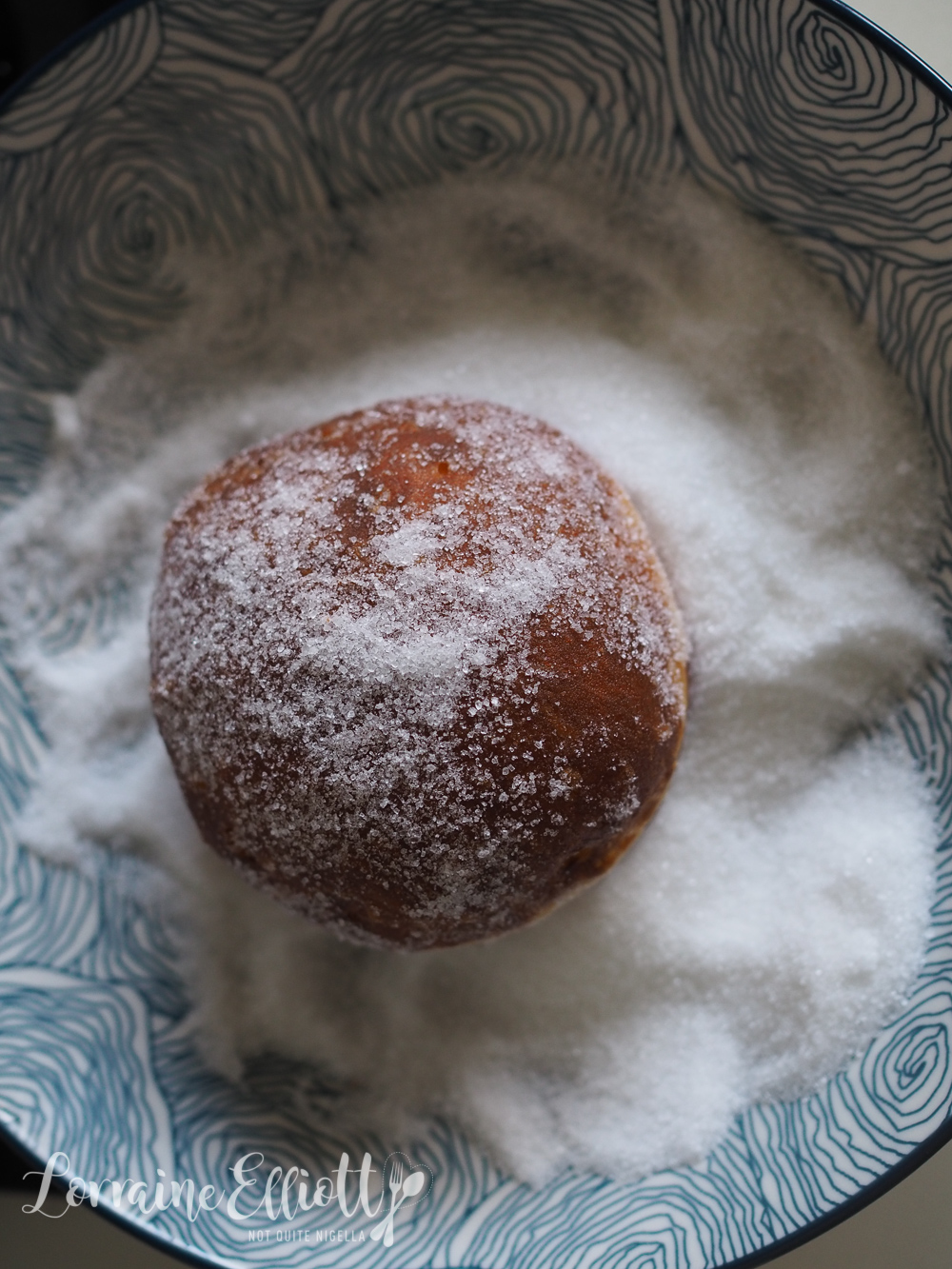 Step 5 - Place your fillings in a piping bag and using a small, sharp knife cut into the side of a donut and pipe the filling in. I put some jam, then the custard and then some jam again so that you can see from a glance what the filling is. Serve while warm! 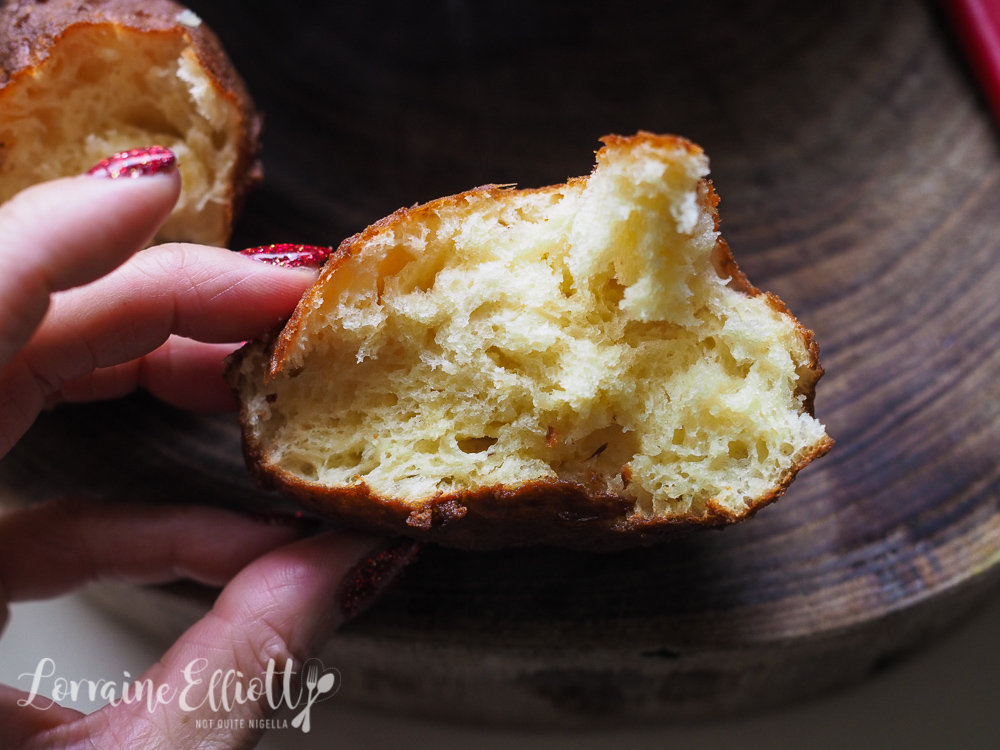 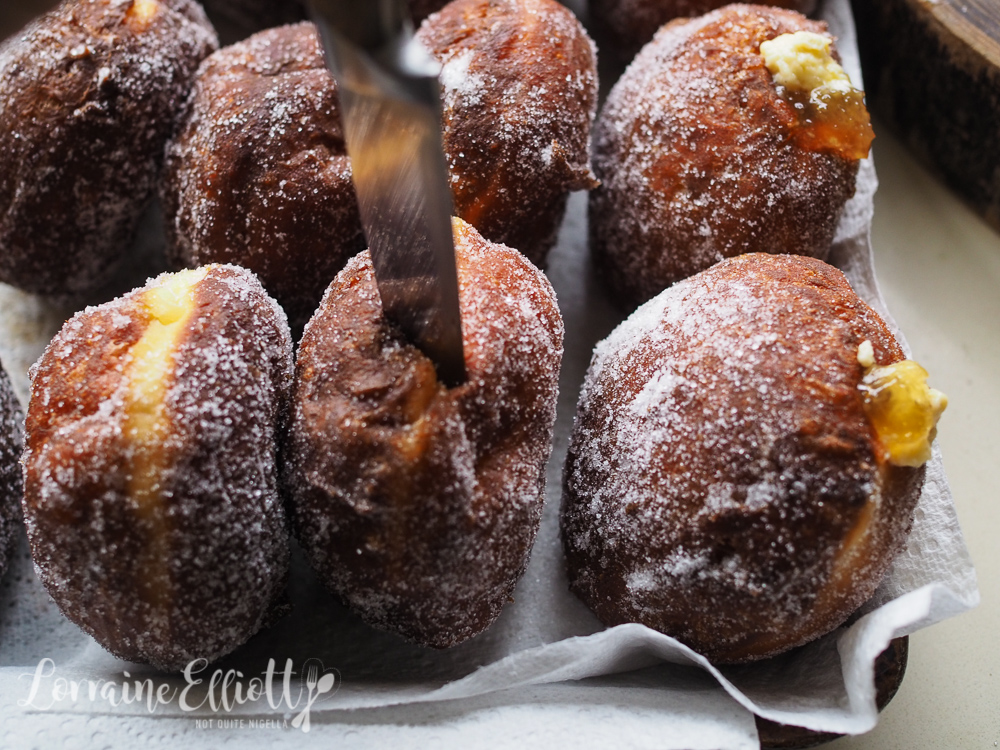 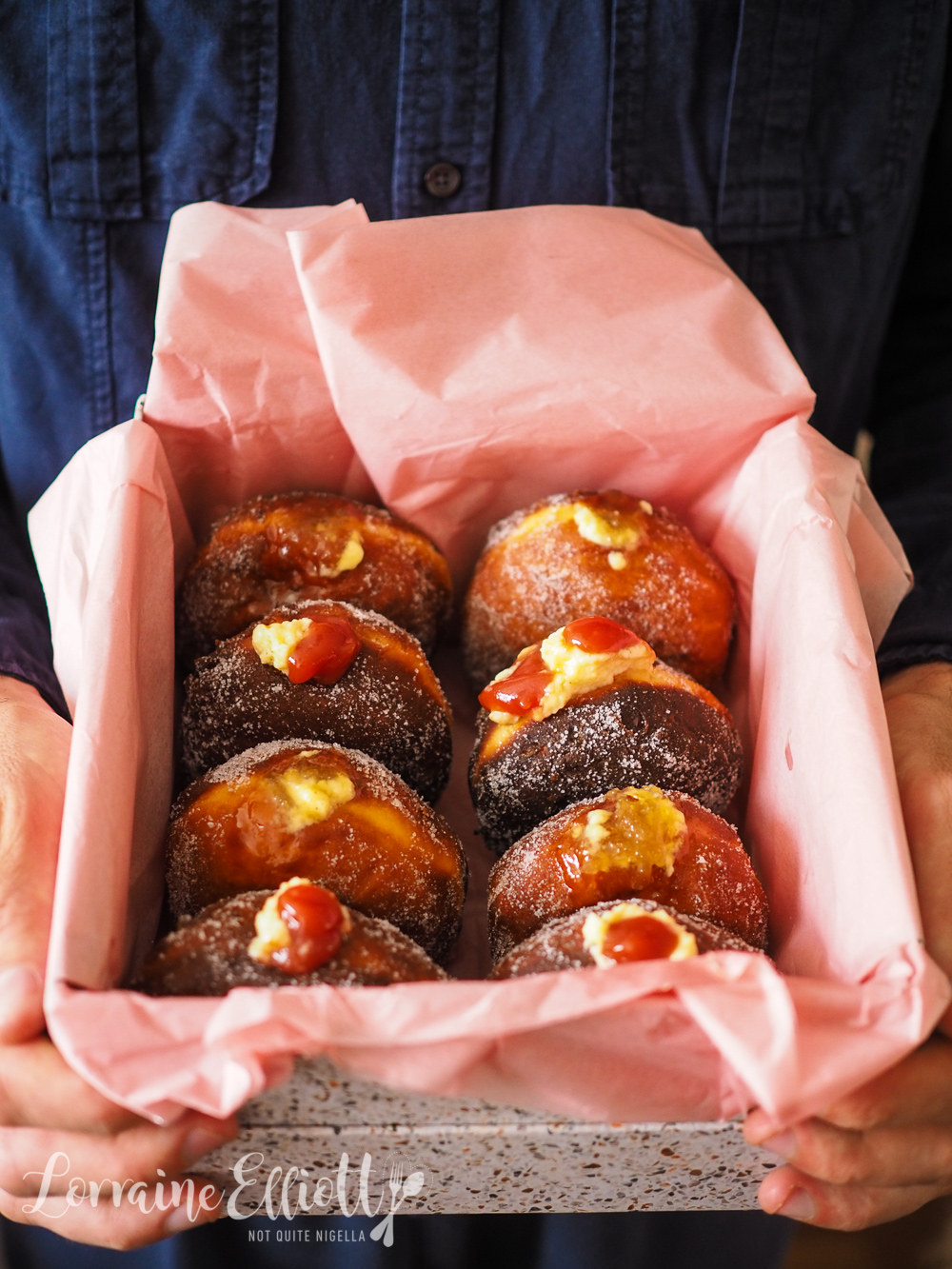