It's A Cake Walk At Madame & Yves, Clovelly 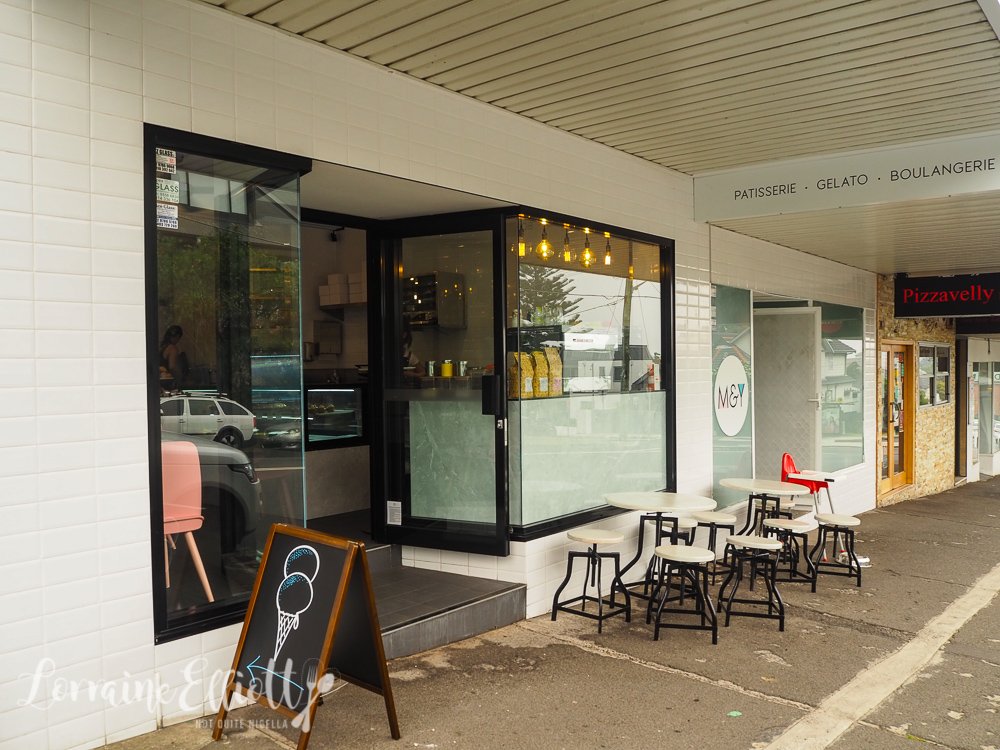 There's a brand new patisserie in Clovelly. Madame & Yves is the first store by French pastry chef Yves Scherrer. There you'll find divinely buttery croissants, classic eclairs and a range of French cakes with flavour twists as well as house made gelato. 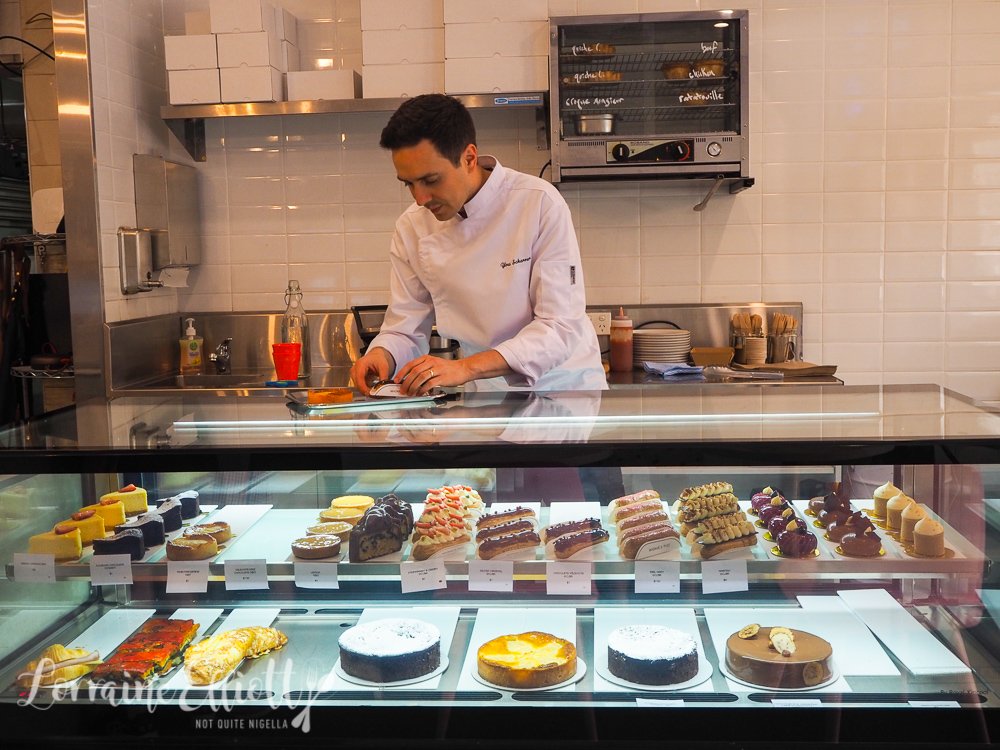 The name Madame & Yves is a pun on Adam and Eve and references Yves's wife Jen who works at the store on weekends. Yves has been a pastry chef for 20 years but wanted to do something that wasn't limited to his workplace. He arrived in Australia 10 years ago from Lorraine in France. 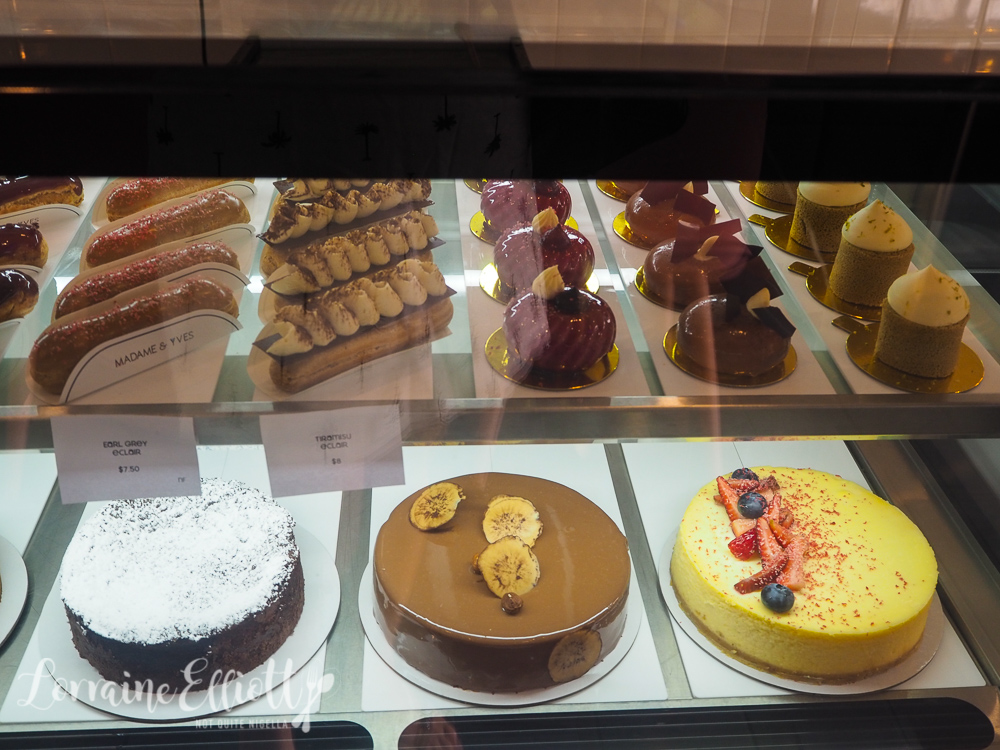 He spent the last 4 years teaching at the Australian Patisserie Academy as well as consulting to Melbourne's Kisume and Raku and well as being a consulting chef at Valrhona, Ananas Sake, Sokyo and est. and he uses his time at these restaurants to recreate some of the favourite desserts. 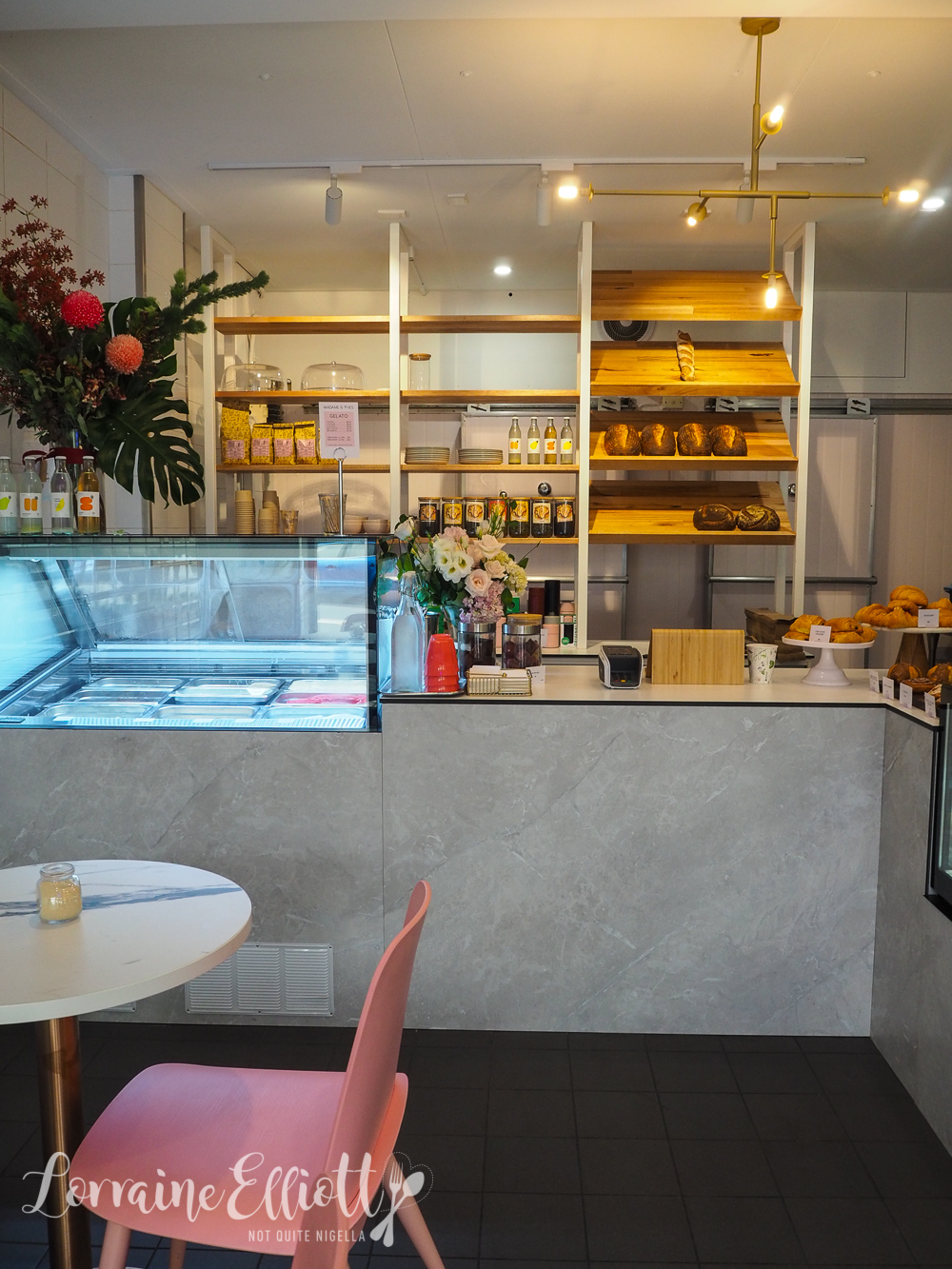 The ingredients used in the patisserie are natural with no added colourings. All colours are what are contained in the fruit or ingredients themselves. The cafe has Green Caffeen reusable coffee cups. 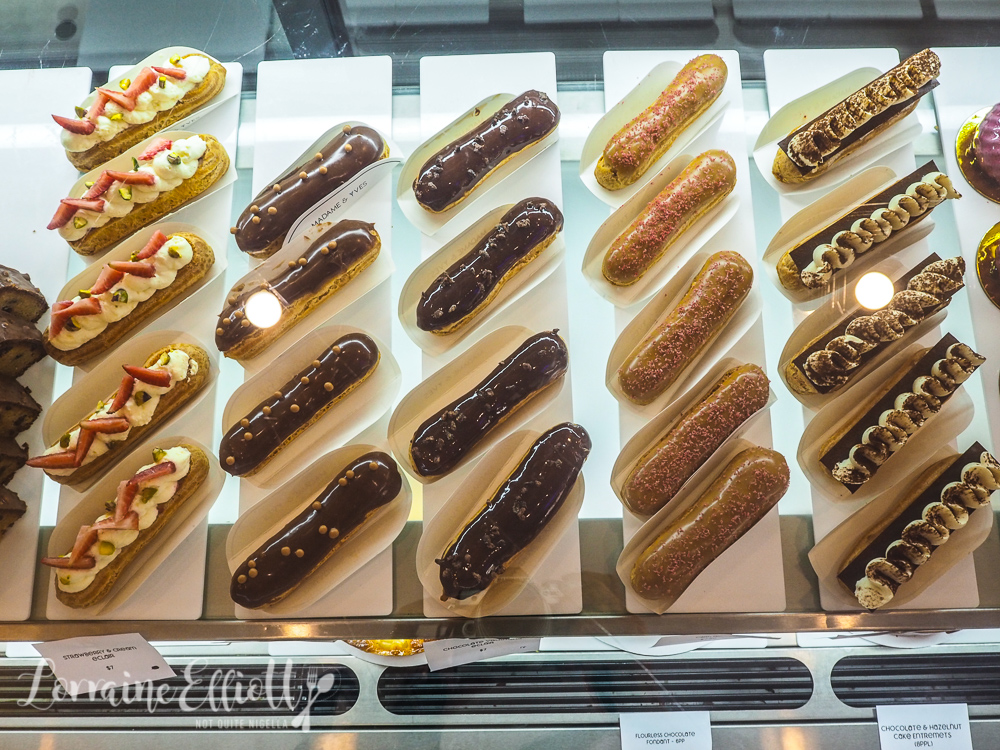 The shop's first day was this past Saturday and Yves baked 100 croissants for the opening which all sold out by 12pm and on Sunday, 200 croissants were sold with people coming back to buy more. 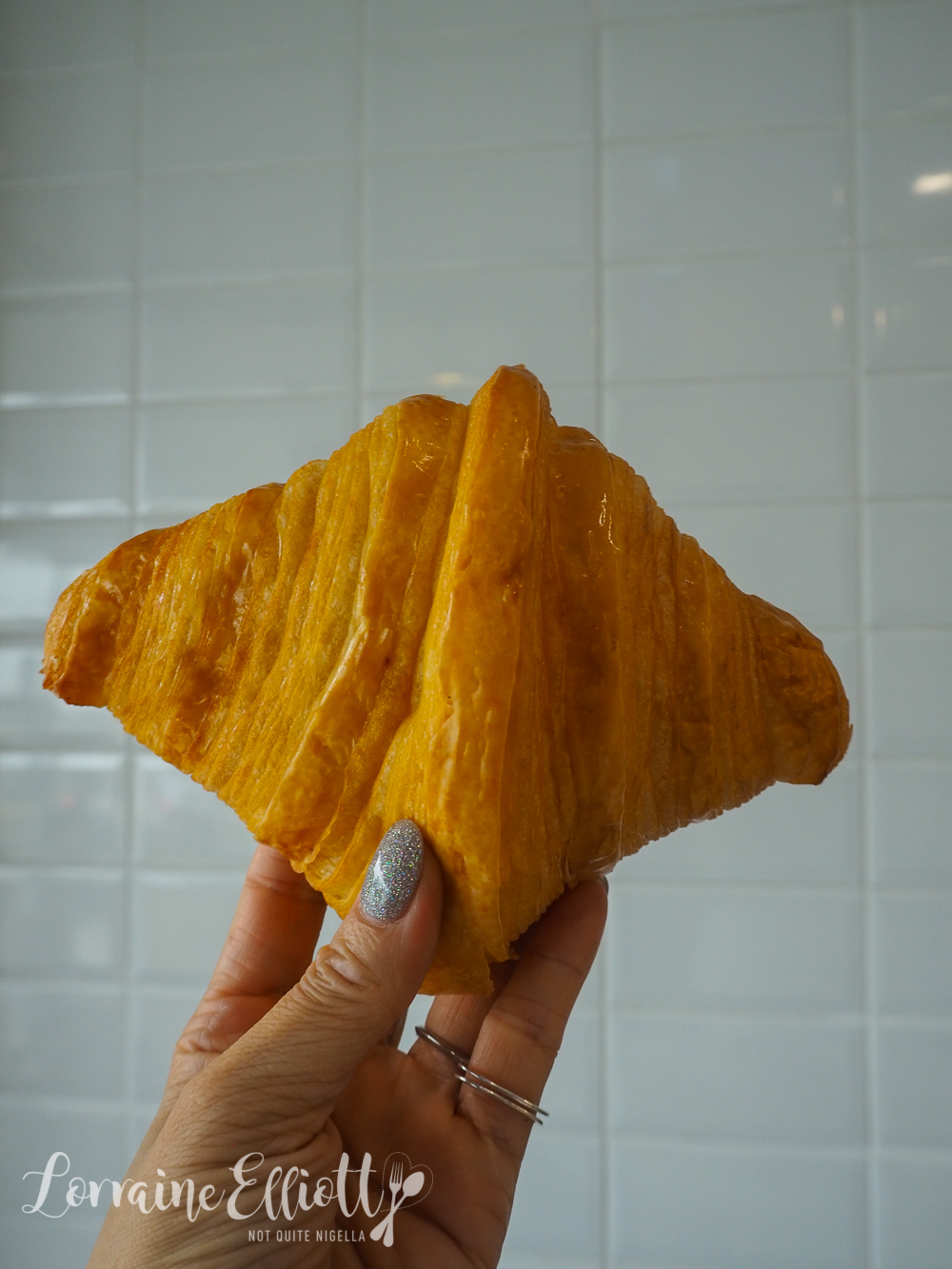 That's not a bad thing. As it turns out Yves believes that croissants are best eaten within the 2 hour window after they are baked after which time they start to become soft again. He used Corman Belgian butter and Laucke flour to make his croissants. 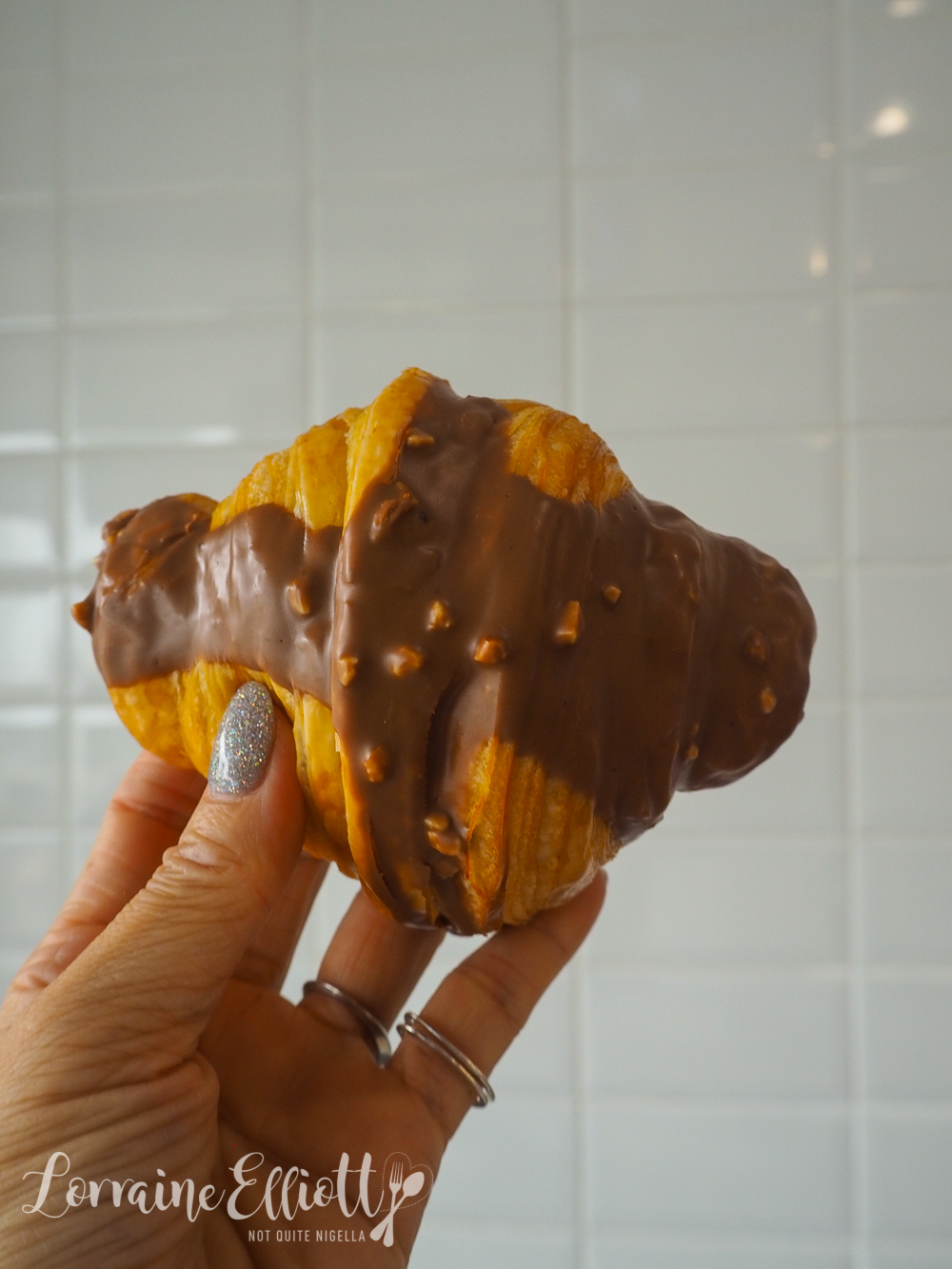 There are several different types of croissants available: plain, ham and cheese, almond, almond and chocolate, pain au chocolat and Ferrero chocolate and hazelnut croissant and specials like raspberry almond croissants. I try the plain and it is superb, you really taste the butter but it's not greasy at all. And although I never really like pain au chocolat, the Ferrero version with a stripe of hazelnut cream and dipped in gianduja is delectable. 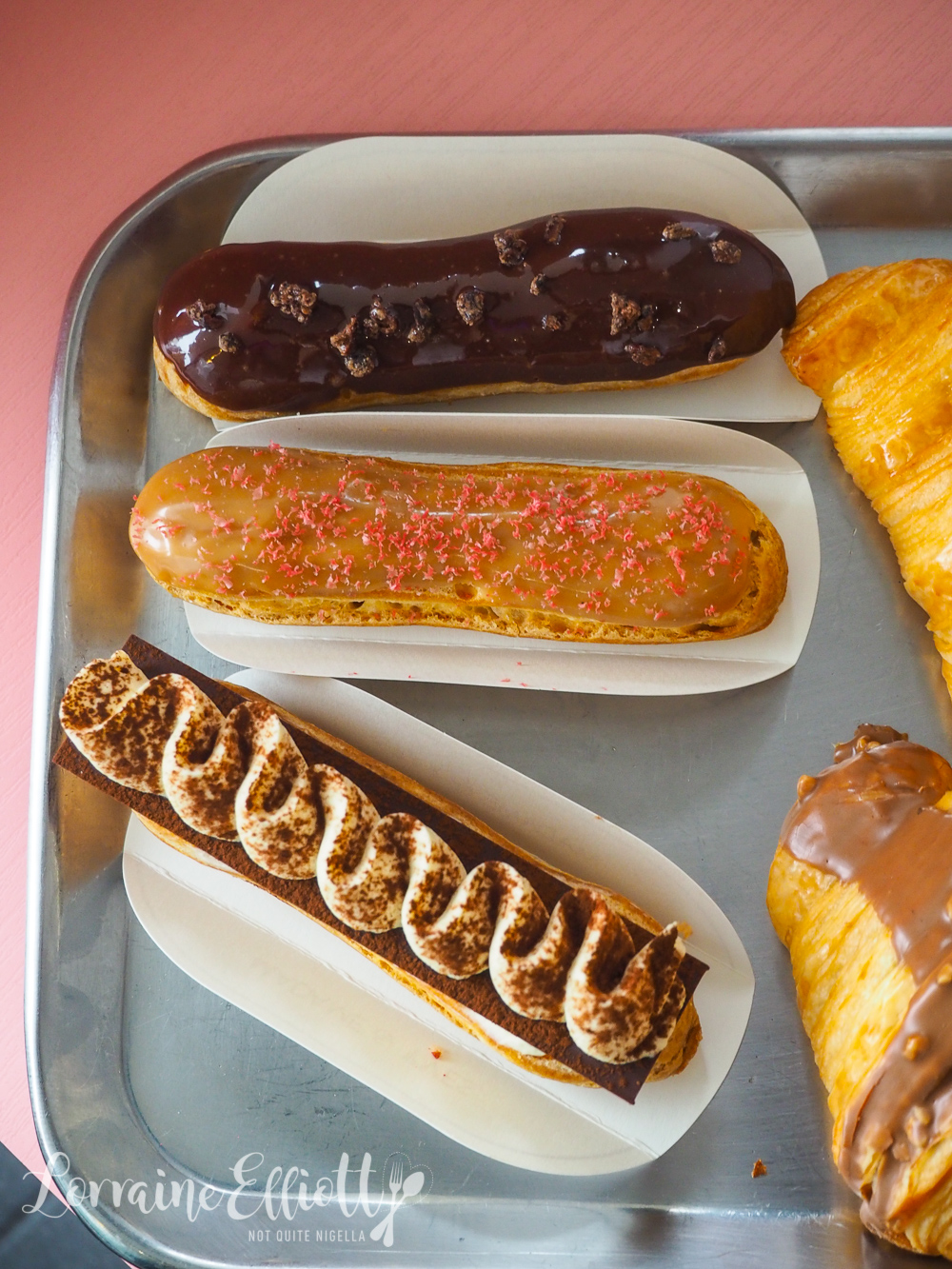 The éclairs are a signature and today's flavours include salted caramel, earl grey, chocolate and tiramisu with mascarpone mousse. The Earl Grey éclair is superb, with just the right amount of earl grey flavour, closely followed by the tiramisu éclair.

Not all desserts are classics. He does play around with flavours especially given the relationship between Japan and France regarding patisserie. I ask him why this relationship exists and he says, "The Japanese don’t complain as much French and they respect food they understand good food too. The French enjoy eating but they will complain as they like good food and will try to respect it." 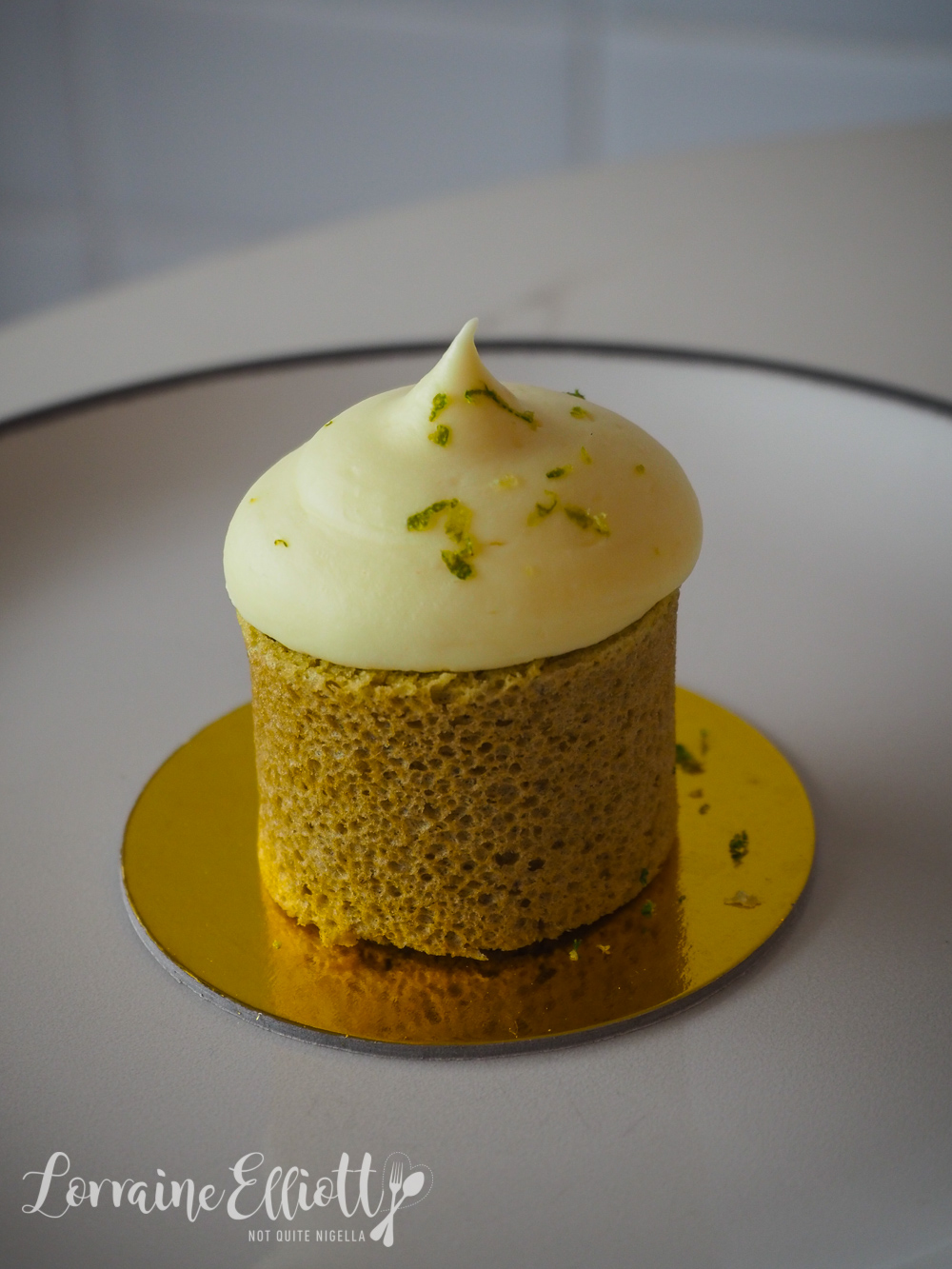 His yuzu and matcha roll was inspired by his time at Sokyo and has a base of matcha choux pastry with meringue to create a sponge that is light but sturdy to roll up like a vertical Swiss roll. It's filled with mascarpone yuzu cream, yuzu chocolate whipped ganache and shiso gel in a gloriously tangy, soft and light cake. It is light on the matcha and strong on the yuzu although it is a little on the pricey side given the petite size. 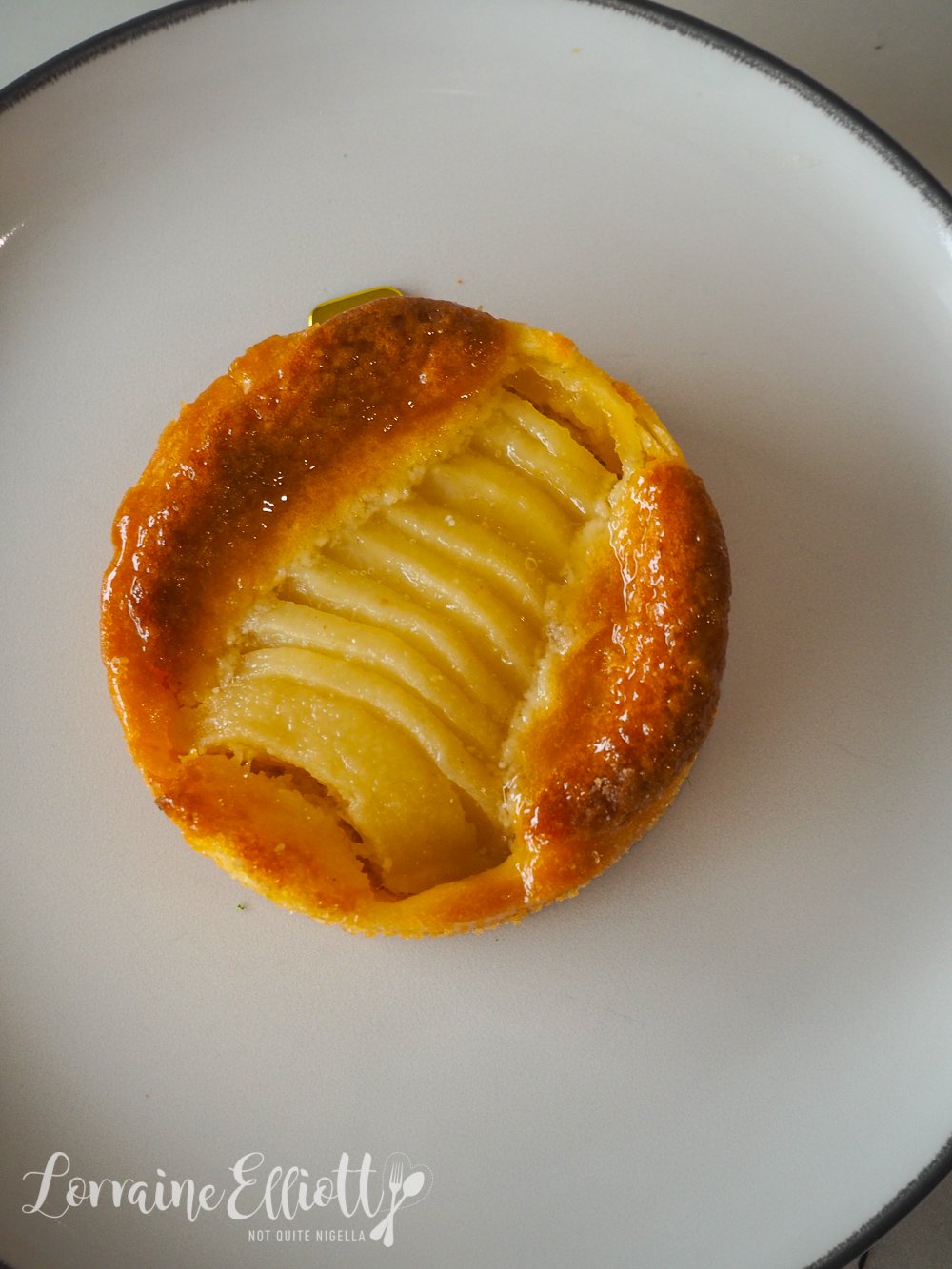 The pear and frangipane tart is crisp, simple perfection while those wanting a low sugar dessert can opt for the blueberry cake with light cream cheese and blueberry marmalade in the centre. 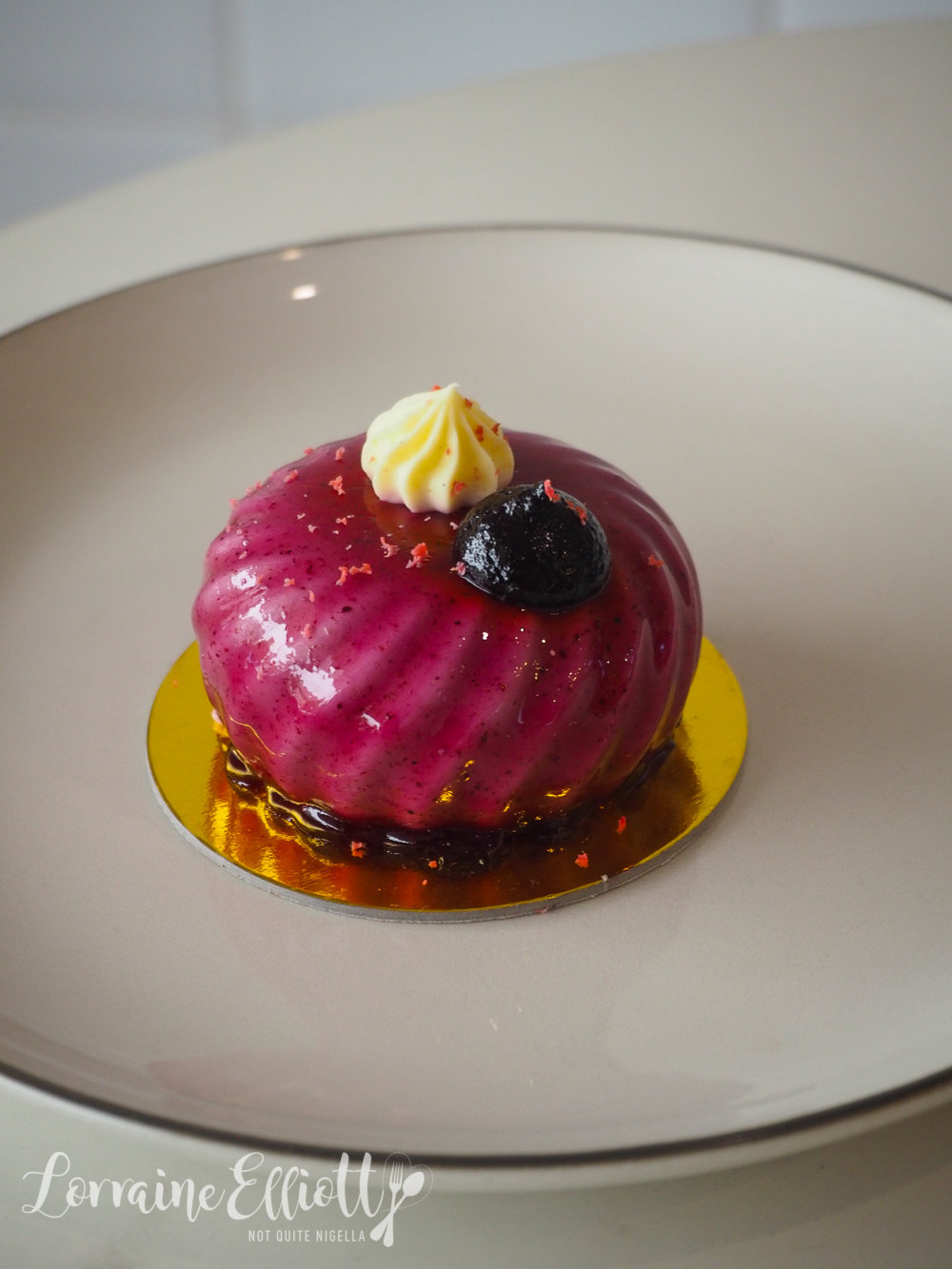 Then there is the travel cake. "In France there is a cake that can travel, that you can put in a car and have at say a picnic," explains Yves. 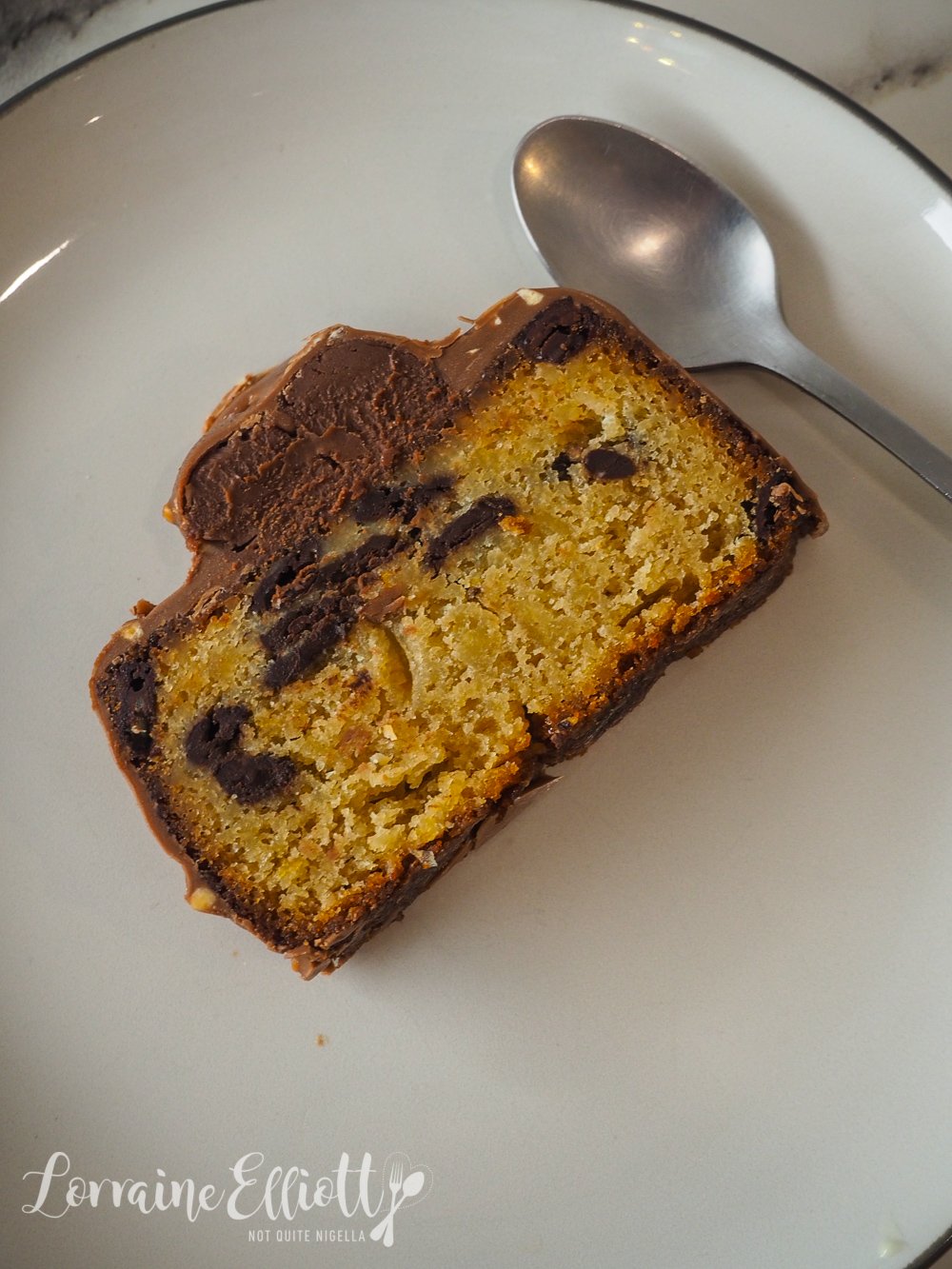 His travel cake is a chocolate and orange chip cake with a dark chocolate ganache ball and coated in chocolate. This lasts up to 5 days and is sold by the slice or as a whole cake in a couple of sizes. 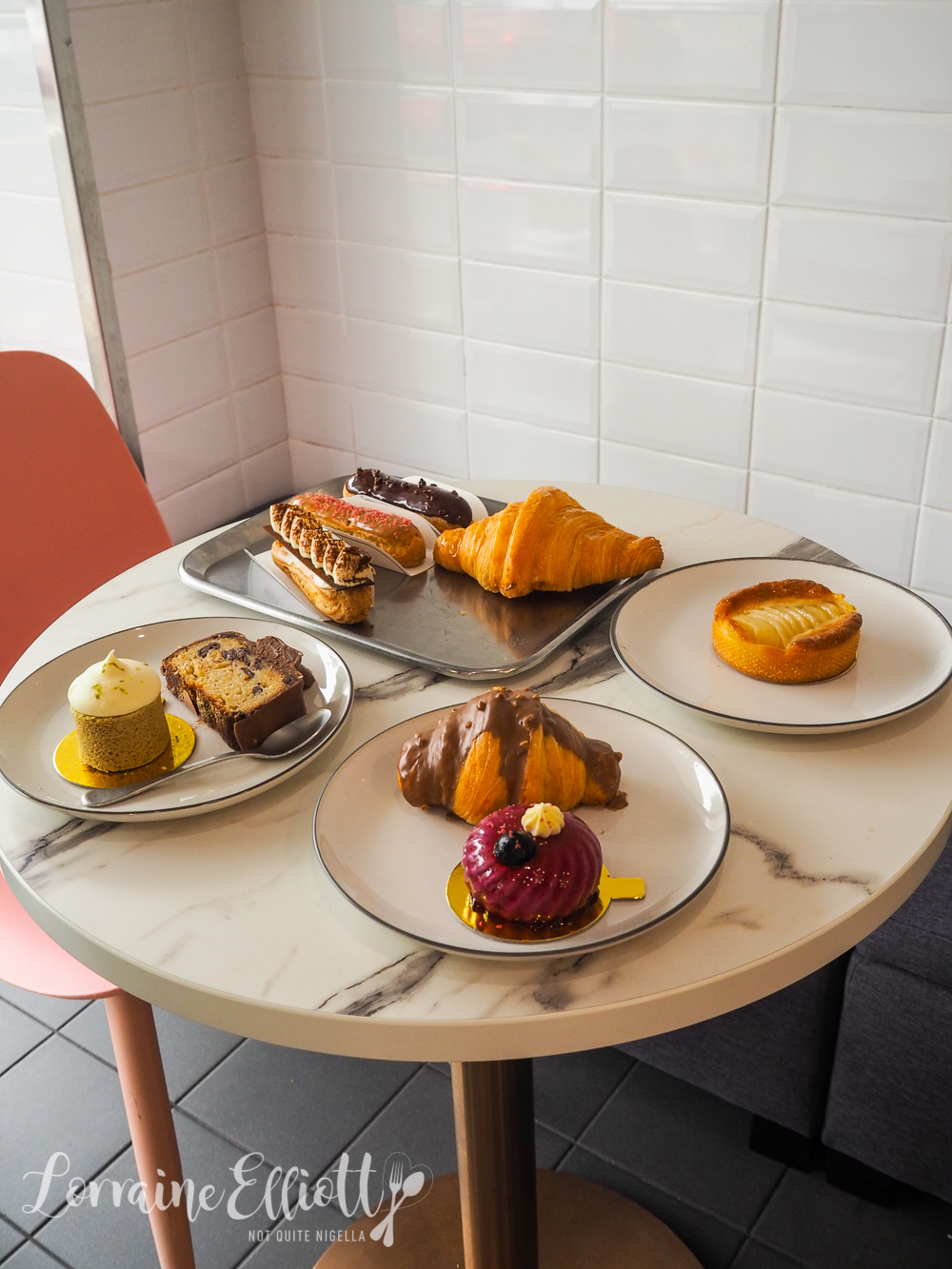 There are also cakes for those with allergies. The cheesecake is gluten free and the chocolate fondant is nut and gluten free. 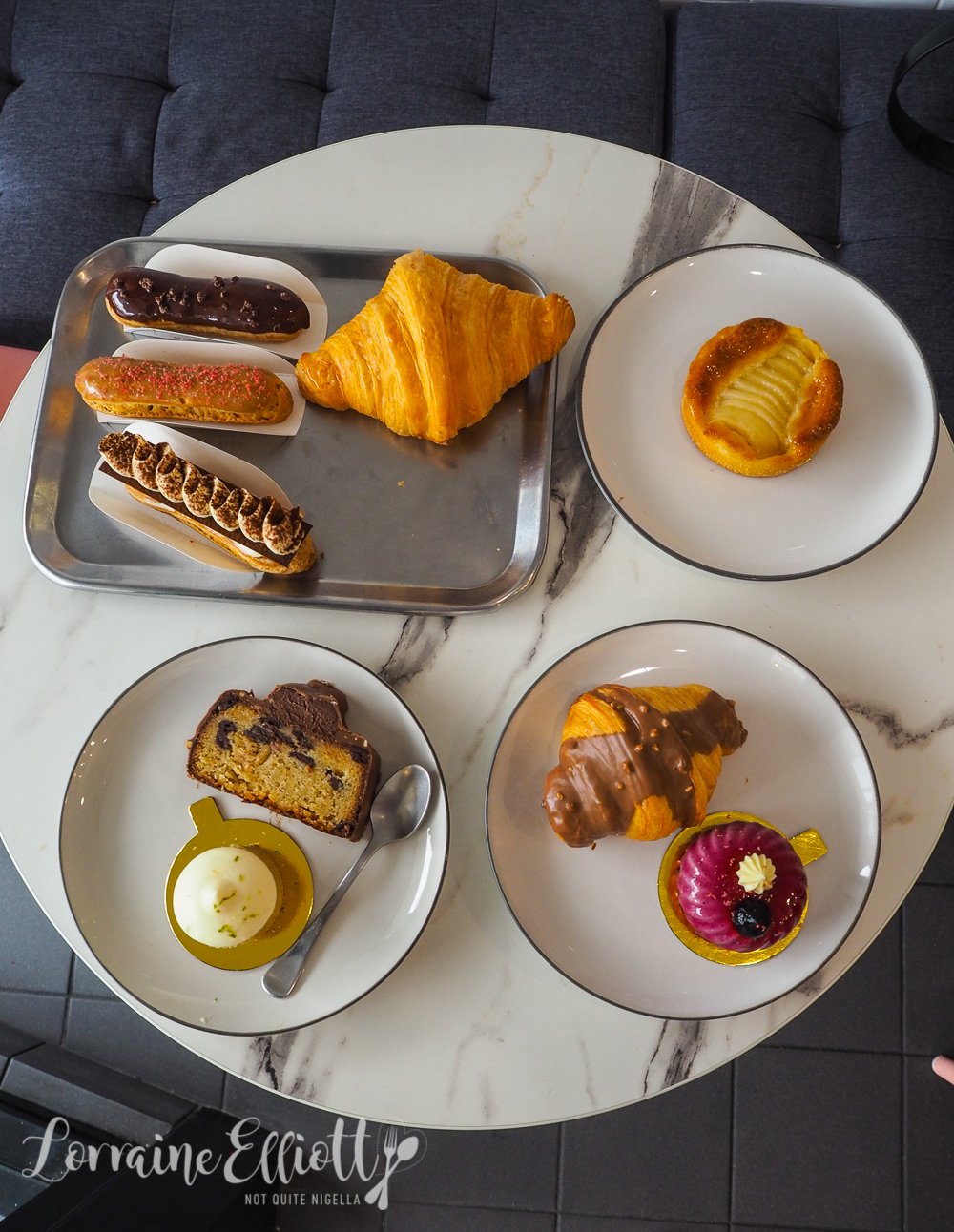 If you're visiting on a hot day then they also have a display of house made gelato. There are all the classic flavours of vanilla, chocolate and salted caramel but other flavours too like an intriguing toasted sesame from his time at Saké that is almost savoury in flavour and reminds me of sesame oil. The lemongrass packs a punch and much like the rest of his desserts, it is strong in said flavour. My favourite is the pineapple and yogurt sorbet (from Ananas) which perfectly straddles creamy and fruity in one.

So tell me Dear Reader, have you ever heard of travel cakes? Do you have a favourite pastry? Do you tend to go for more classics or experimental items?