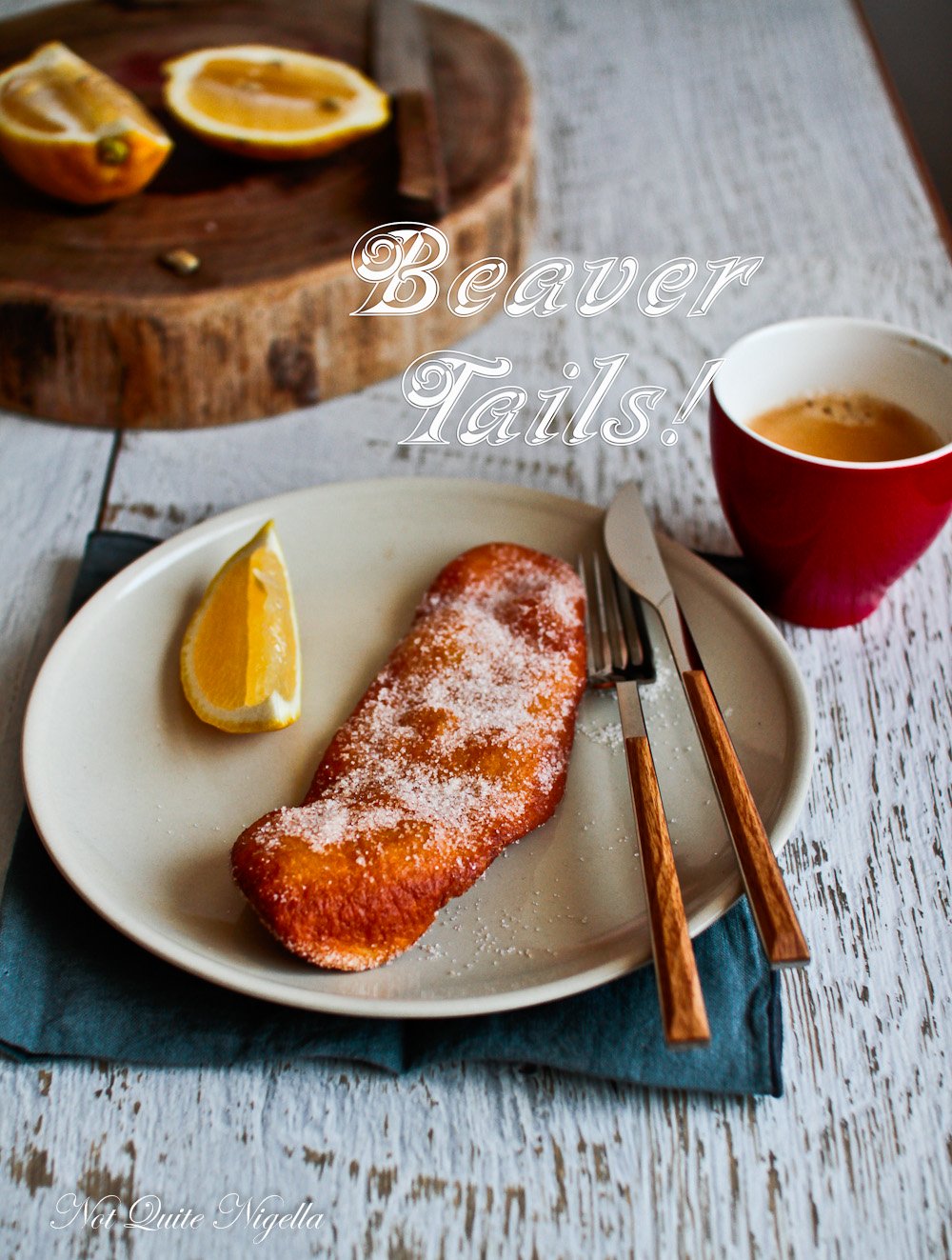 The must have item when visiting the Canadian capital of Ottawa is a beaver tail. This fried dough pastry has become synonymous with Byward Market where a chain called BeaverTail® serves thousands of these long oval shaped pastries. BeaverTails® are made of a half wholewheat flour mix risen, spread and deep fried. A donut in another form if you will. And on a recent trip to Ottawa I was passed the recipe by lovely Canadian food writer Paula Roy!

Most people have a Winter memory of eating BeaverTails (although they're popular year round) when the Rideau Canal is frozen solid. There are four BeaverTail® branded huts situated along the canal and people skate along the ice covered canal and buy the pastries with hot chocolates.

They come in a variety of toppings from the heavily laden down numbers like the "Triple Trip" aka chocolate, peanut butter and Reese's pieces to savoury ones like garlic butter and cheese (where they resemble a Hungarian Langos). The most popular though is the Killaloe Sunrise with cinnamon sugar and lemon which is a balance of tart and sweet. They're soft and light and now you can make your own BeaverTail® style pastries using a copycat recipe inspired by the original. 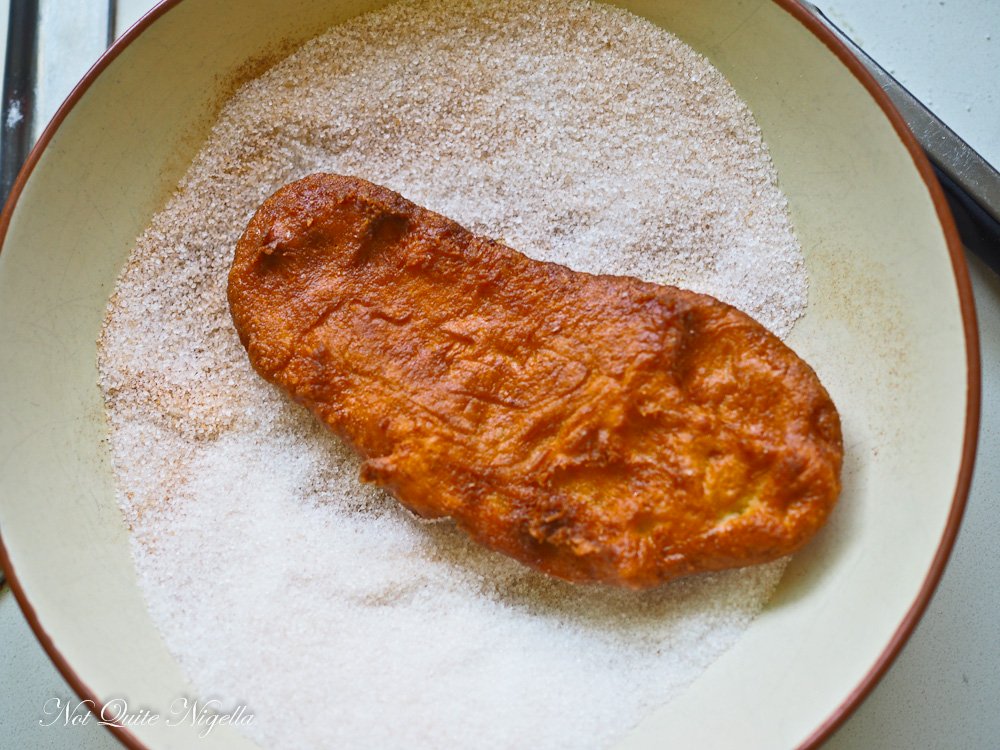 When Paula offered to send me the copycat BeaverTail® recipe for these after dinner I was delighted to try making them from scratch (because realistically it is going to be a while until I get back to Ottawa). It took me a while because I don't really like deep frying but I will make an exception for donuts.

One of my friends Miss America is a donut nut. He loves pastries and donuts more than anyone else I know. After dinner we were giving him a lift home and driving through a rather dark and deserted area of the inner city of Sydney. Miss America piped up and said that he wouldn't have felt safe walking home or going home by public transport. But he had a solution.

"A woman that I worked with was a little eccentric but she used to bring a frozen chicken to work with her," he said. "It had to be frozen so she could use it as a weapon in case anyone attacked her," he explained. Apparently every day she left for work while it was dark and worked long hours so it would often be dark when she walked home, especially in Winter. So the chicken would go in the work freezer (I guess there's no chance of anyone pinching a frozen raw chicken for lunch) and it would accompany her to work day in and day out.

"Really? Did you see the chicken?" I asked.

"Yes I did sight the chicken," he said nodding his head. "It was real," he said sighing, before adding perhaps a little superfluously, that she really was a little eccentric.

So tell me Dear Reader, do you have safety protection when you go out? And have you ever considered carrying a frozen chicken? ;) Have you ever eaten a Beaver Tail style pastry?

Step 1 - In a large mixing bowl (a stand mixer is ideal), combine the yeast and warm water. Let stand 3 minutes to activate. Add sugar, milk, eggs, salt and melted butter to the bowl, stir to combine.

Step 2 - Mix both flours together and add to make a soft dough. Knead for about 5 minutes using a dough hook or 8 minutes by hand. The dough should be smooth and elastic. Place the finished dough in a greased bowl; cover with plastic wrap and let rest about 45 minutes to an hour.

Step 3 - Punch down dough to deflate then divide into 10 equal sized portions. Let rest, covered with tea towels, for 10 minutes. While dough balls rest, combine sugar with cinnamon in a broad, shallow dish. 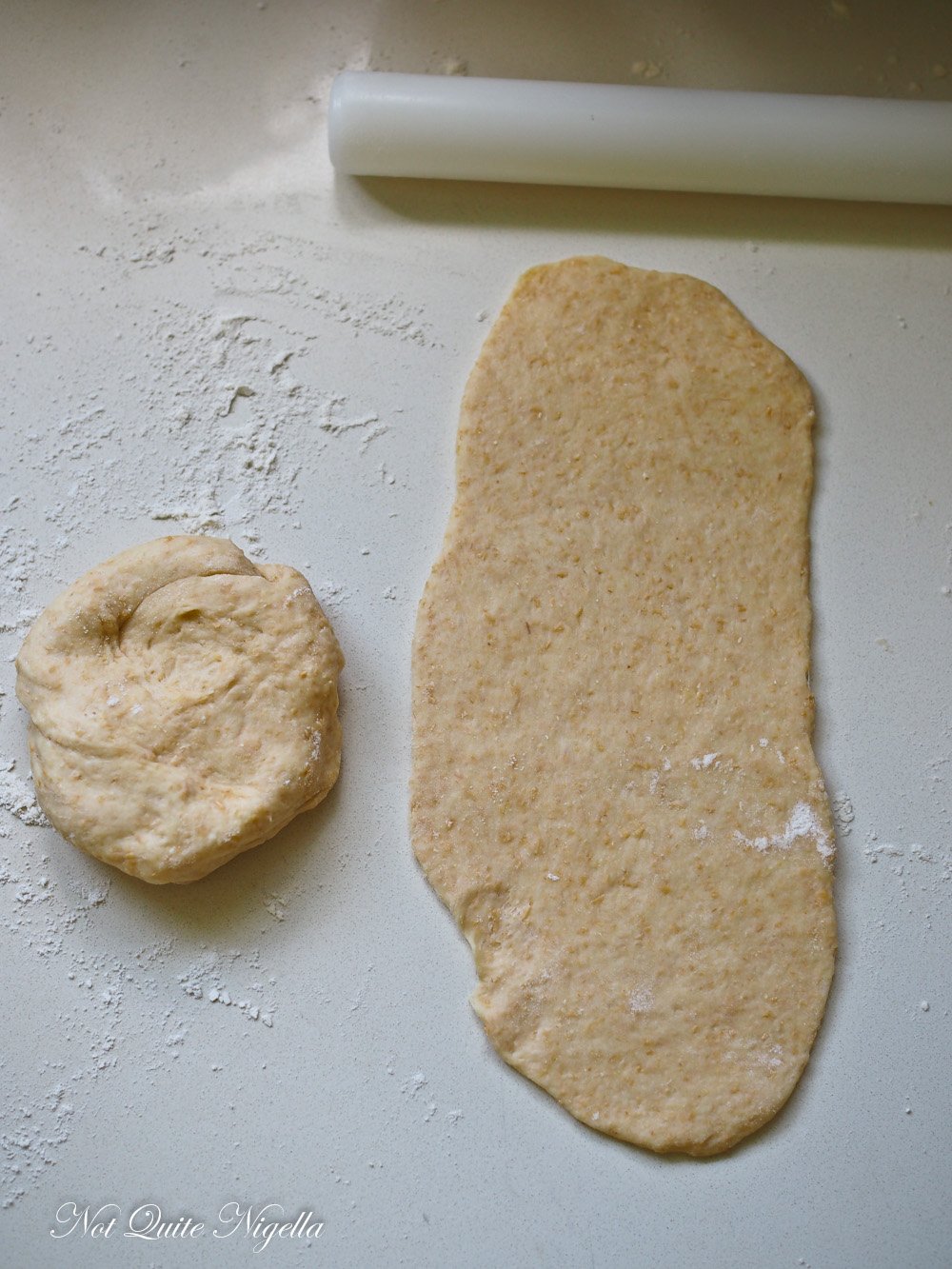 Step 4 - Working with one ball at a time, roll out into an oval about 1/4 inch thick; cover again with towel and make sure that they lie on a floured surface. Heat about 4 inches of oil in a deep fryer or large, tall saucepan. The oil is ready for frying when it reaches about 196C/385F.

Step 5 - Give the ovals one last gentle stretch and then add them to the hot oil (as many as will fit at one time without being too crowded). Cook about 2-3 minutes per side or until golden brown on both sides. 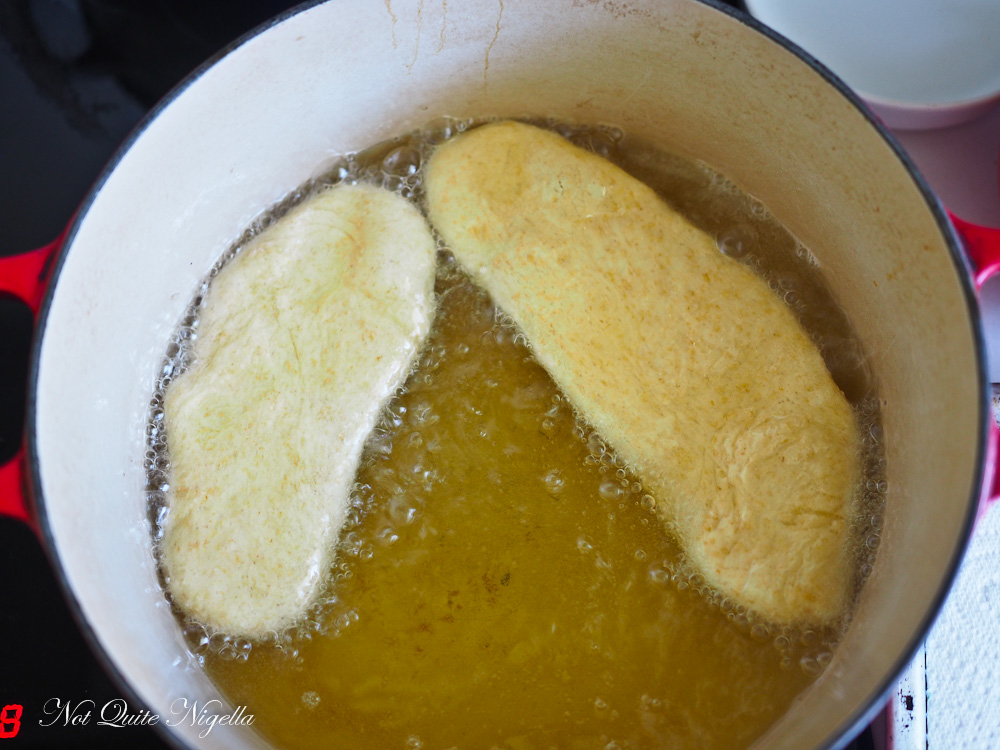 Step 6 - Remove from hot oil with tongs and drain on paper towels for a moment. Dredge the beaver tails in the dish with cinnamon and sugar; flip to coat both sides and shake off any excess. Squeeze fresh lemon juice over the pastry and eat while warm. Paula says the key is to serve them straight away while they are hot rather than waiting for them all to finish frying.