You Drive Me Caprese With Hasselback Caprese! 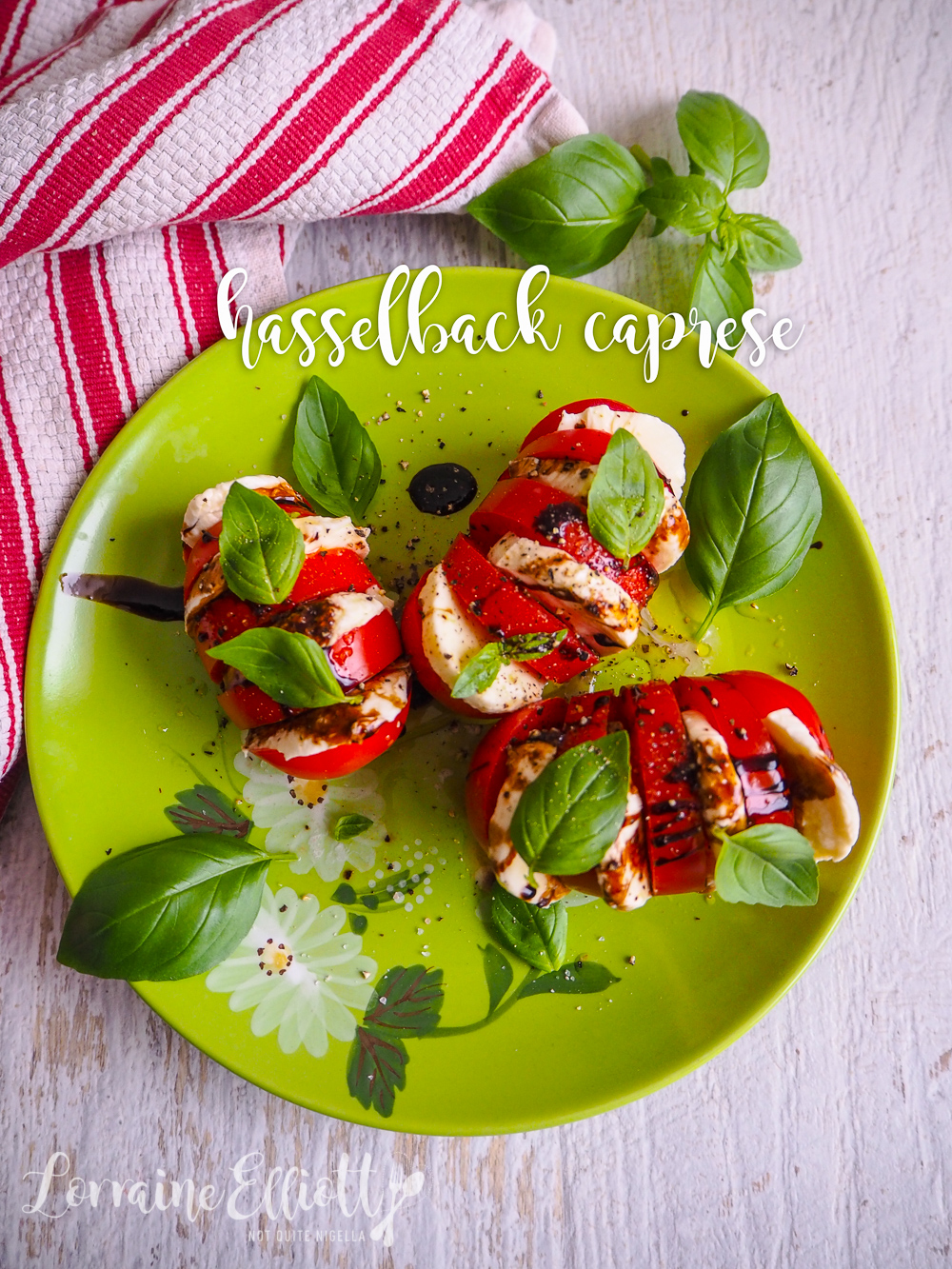 Dear Reader, I urge you to give this clever little food hack a try at least once. Not only does it taste fantastic but it's absolutely delicious with in season sun kissed tomatoes, aromatic basil and creamy bocconcini. Plus it can all be done in 5 minutes leaving you more time to enjoy your holidays!

I promise that this is so delicious you may want to buy a dozen tomatoes to hasselback them-I made six and then went on to make another half dozen because they were eaten so quickly! 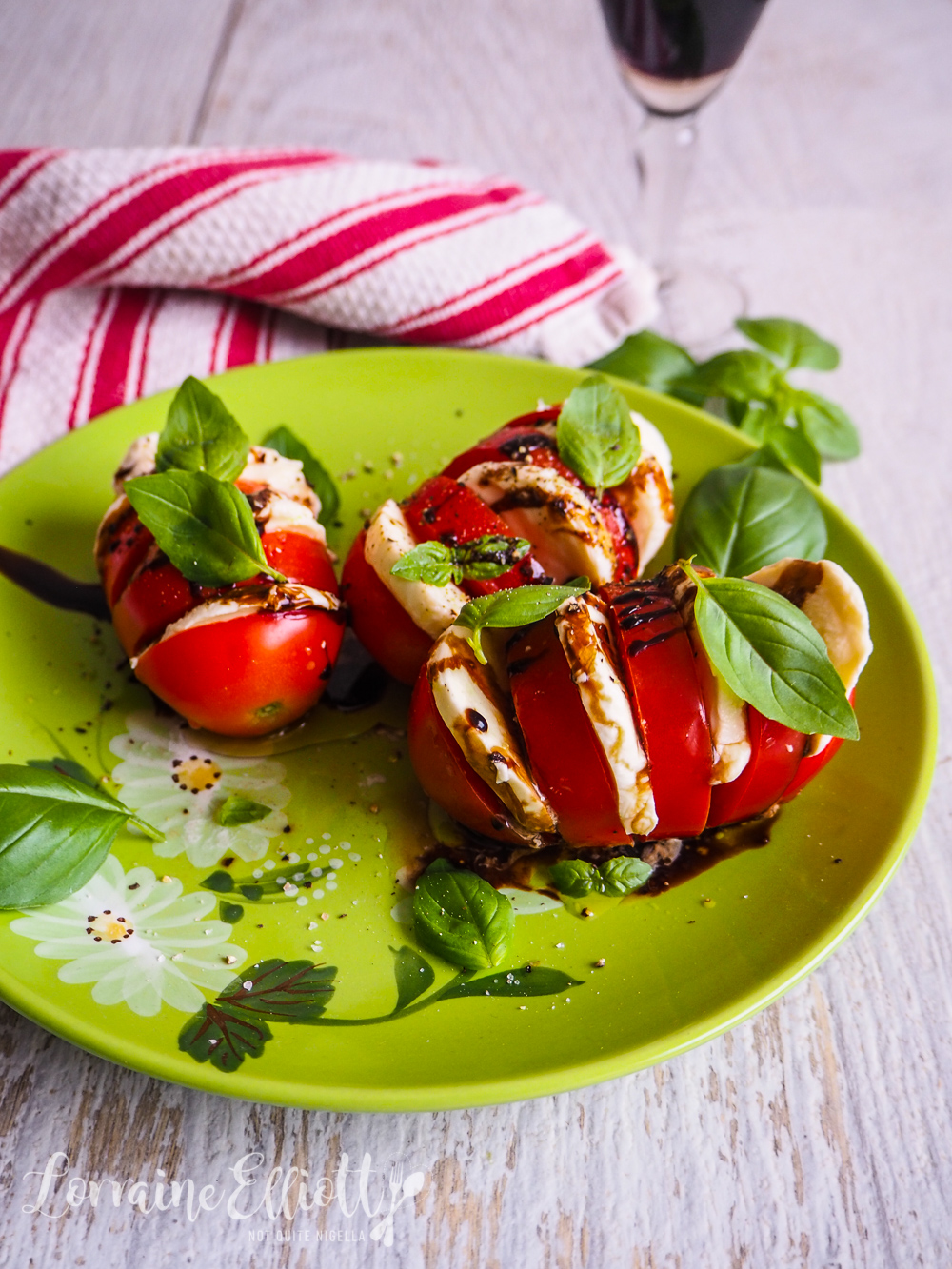 How are your holidays going Dear Reader? I'm enjoying them immensely-it's like having a very, very long weekend. And with the heat I'm finding that I only want to make things that take very little time in the kitchen. There has been very little elaborate cake production here and it's all 15 minute easy dinners. And the very best thing about the hasselback caprese is that it is so easy to make. I served them with scallops (another super quick recipe I'll share with you soon)and dinner was made in 15 minutes.

Another reason why I haven't been cooking as much as that we've also been eating through a lot of our Christmas gifts. I've got some delicious new things to show you for In My Kitchen, a series hosted by the lovely Sherry from Sherry's Pickings where we show you some interesting new additions to the kitchen. 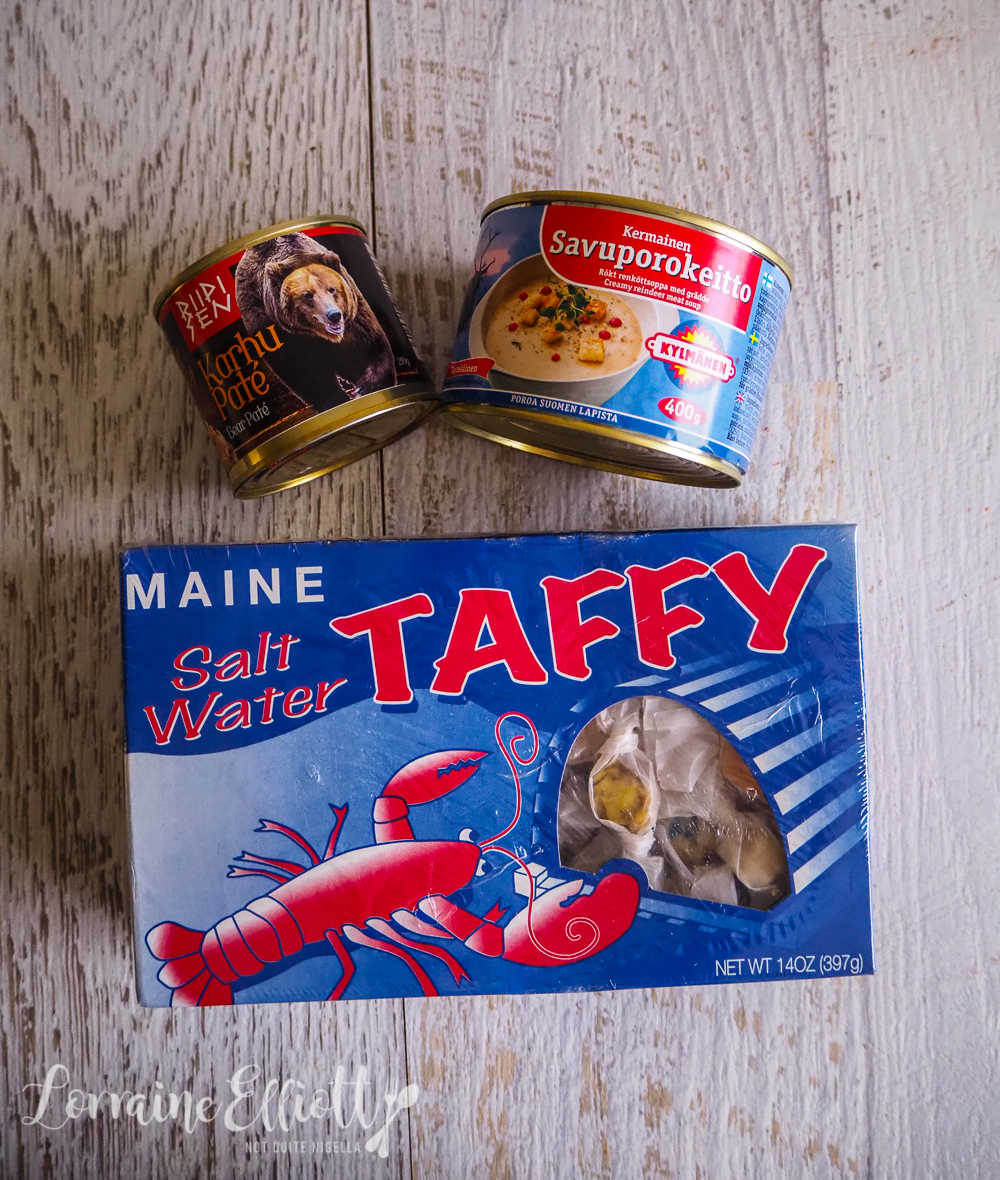 The first items are my Christmas gift from my sister Blythe. A few years ago we had visited Finland and seen bear pâté and eaten reindeer. I wasn't so sure about eating bear as some are endangered so we didn't buy it but Blythe loves trying exotic meats. So she bought me some bear pâté and reindeer soup along with a big box of salt water taffy from America. 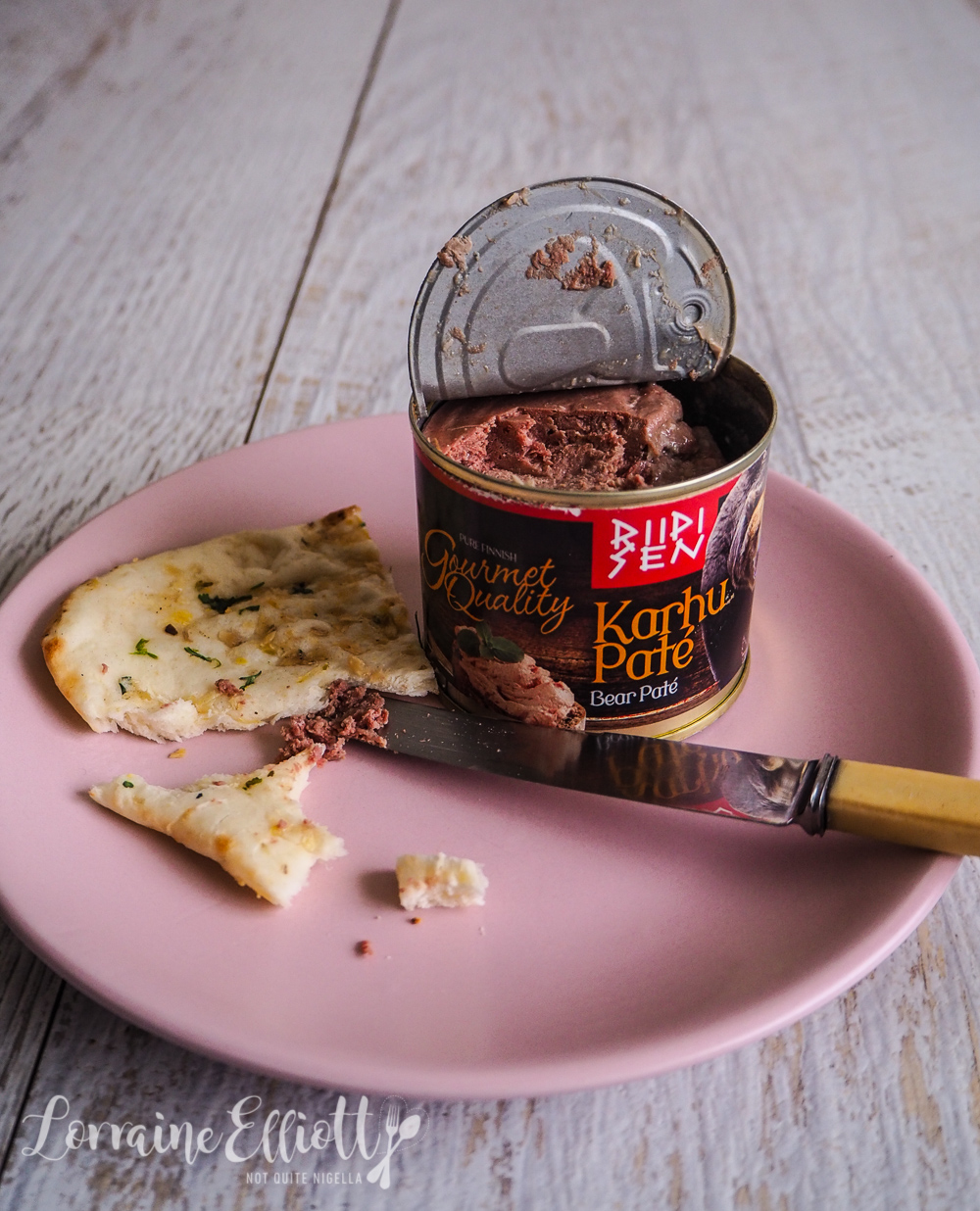 I have to admit that the bear pâté didn't thrill me very much but then again I don't like much tinned food and I find that tinned pâté smells a little dog foody (we only seem to buy tinned tomatoes and beans). And I'm sure that the garlic naan I paired with it was not traditional and it should have been served with Finn Crisp instead. 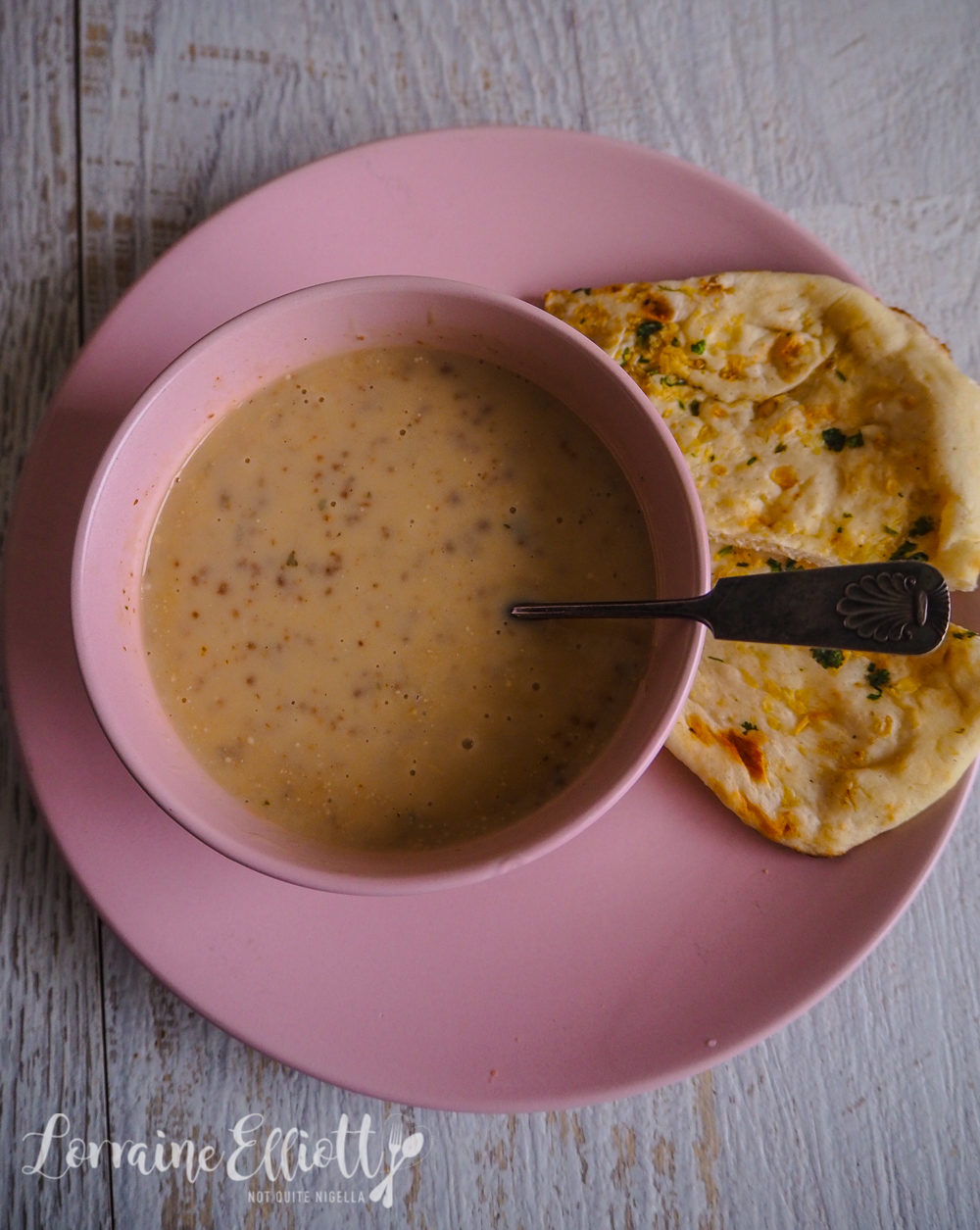 The reindeer soup was more palatable, like an creamy chowder with tiny specks of reindeer meat. I think you're supposed to add lingonberries and reindeer meat or potatoes on top but I was fresh out and just had redcurrants which were quite nice. 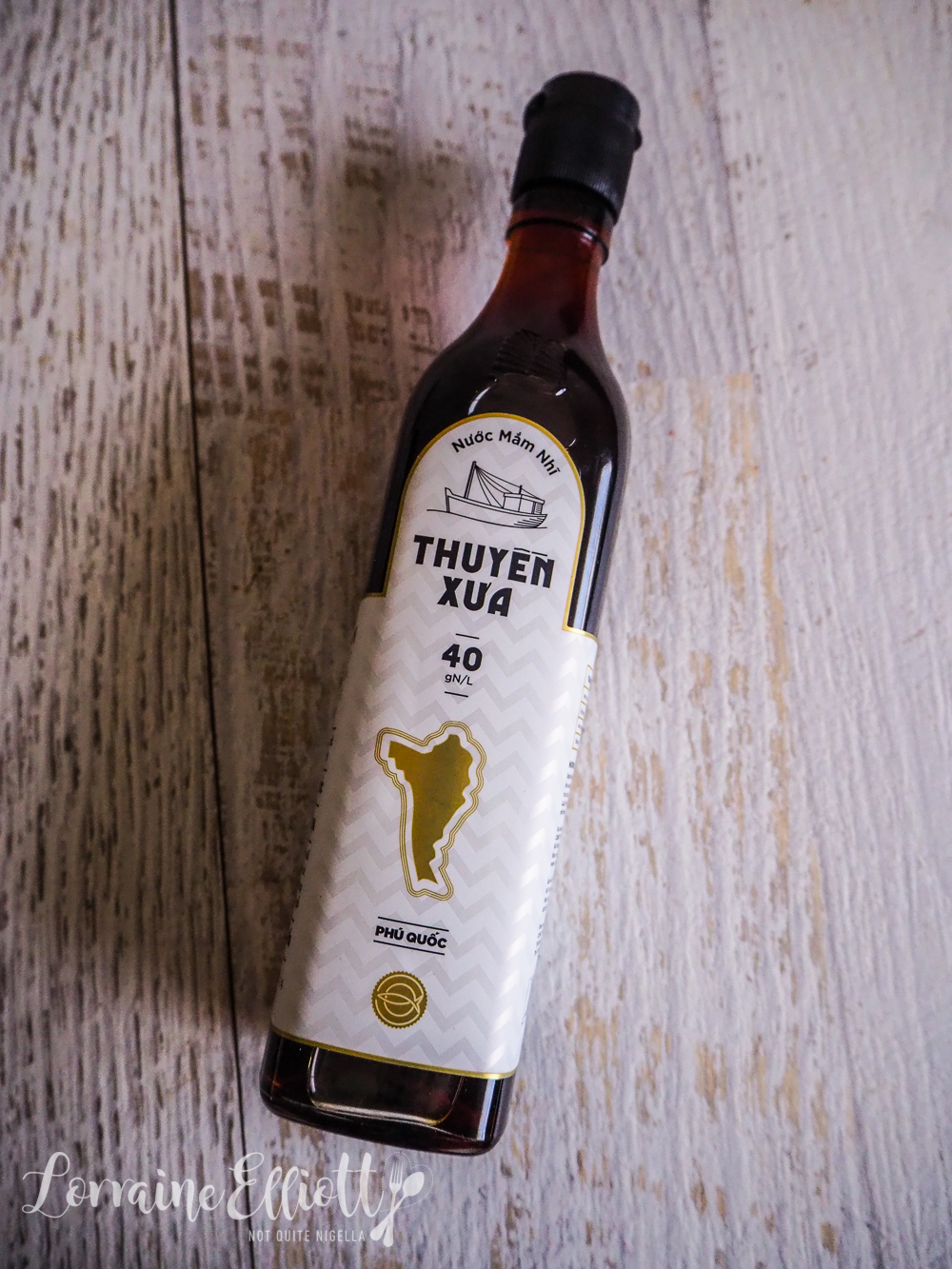 The next item was a gift from my cousin Richard who was travelling through Vietnam. Red Boat fish sauce has link to Silicon Valley and is made by a former Apple engineer Cuong Pham. The Red Boat label looks different from the US version with the literal red boat on the label because this is the version found in Vietnam. Their fish sauce is made out of just Phu Quoc black wild anchovies and Ba Ria pure sea salt with no additives, sugar or water (which denote watered down or lower quality fish sauces).

Fish sauce actually comes in different "N" or nitrogen levels. The higher the N level, the stronger and more complex the flavour as well as a higher level of protein. The Red Boat fish sauce has quickly become the fish sauce for chefs and foodies and they also do a N33 fish sauce that is a little tamed down. I did a little comparison using the four kinds that I had here and the Thai one was sweeter and more watered down while the Vietnamese ones were stronger and saltier with no water added. This one was definitely the most complex flavoured and the saltiest. And to show you that food nerdery runs in the family, Richard told me that he did a fish sauce tasting too! 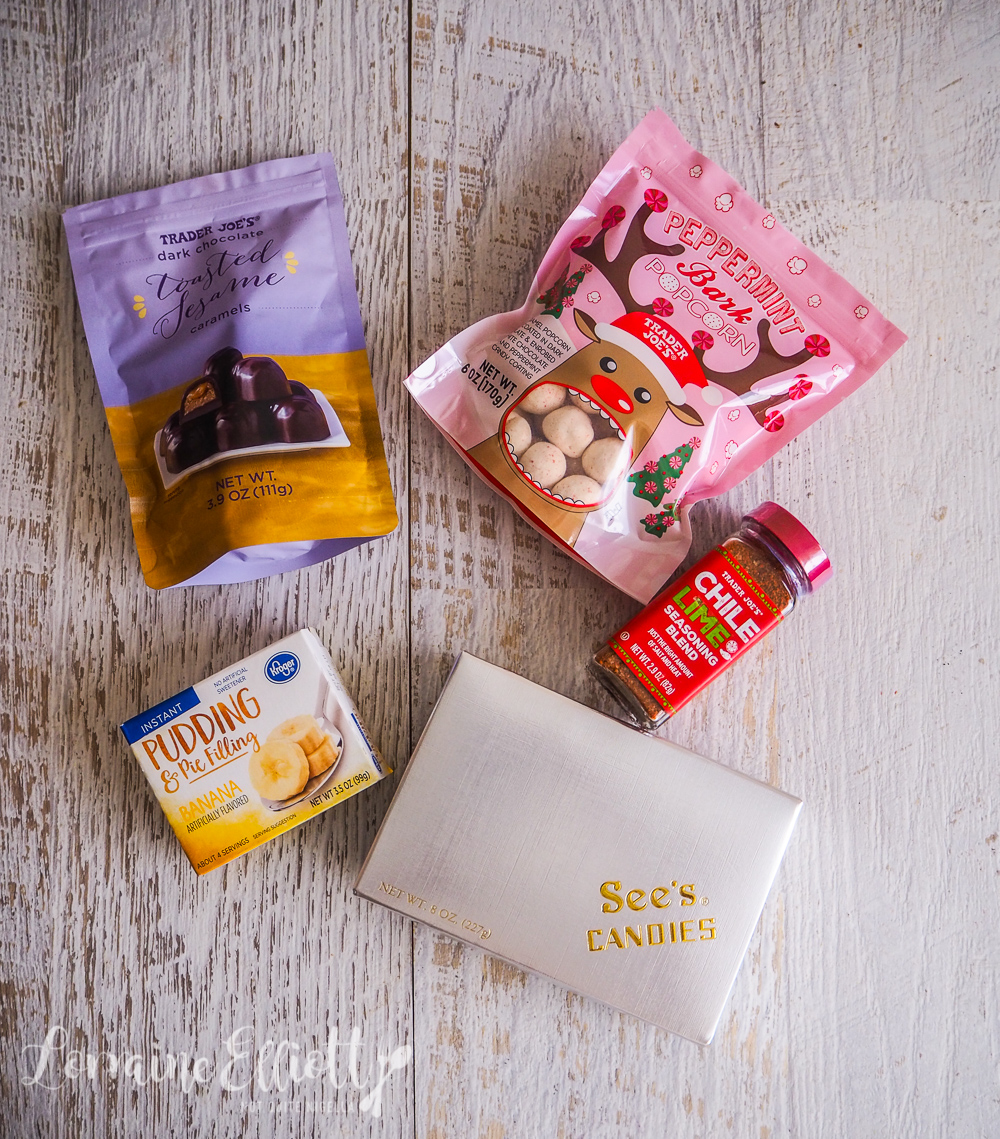 The next lot of items is from my friend Ivy. While Blythe and I are polar opposites, Ivy and I are sisters from another mister (although she has a Southern accent to my Australian one). She also just came back from America and she knows my love of popcorn, Sees candy, chilli, sesame and banana pudding so she bought me all of these goodies. The popcorn is amazing - I want to try to make a version of it. It's rolled in caramel and then covered in peppermint white chocolate. And the box of Sees candies went in about 3 days! 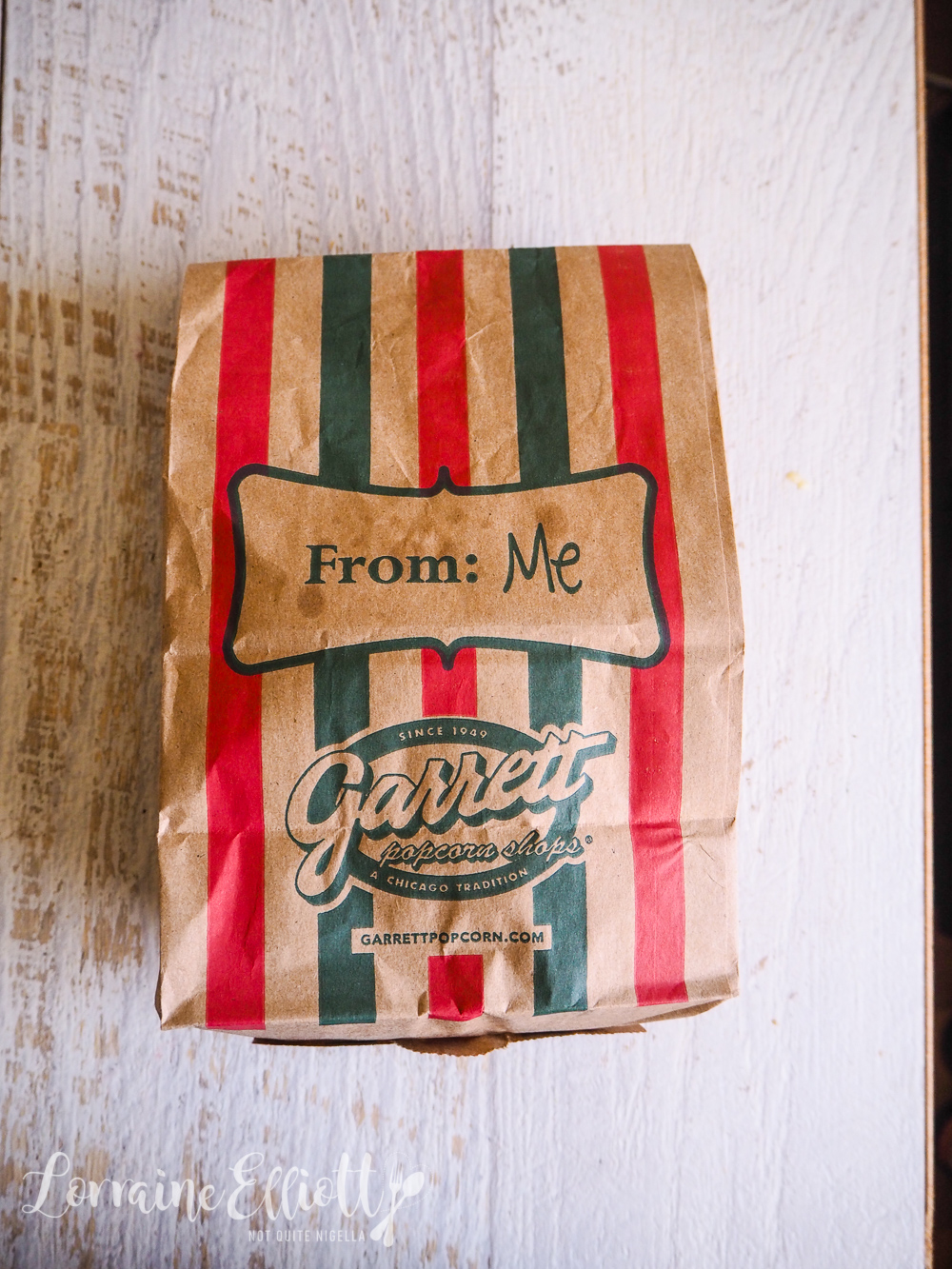 The last item is one of my favourite foods from America-Garrett Popcorn. Nina just came back from visiting her mum in Arlington over Christmas and before she left she asked if I wanted anything and I said that if she saw a Garrett Popcorn, then I'd love a bag of cheese popcorn. Se messaged me the day she arrived home. "Are you home? I need to drop something off to you". The cheese popcorn doesn't have a long shelf life and the man that sold it to her told her that it lasted for just 24 hours. "And I've been flying for 22 hours so you have two hours to eat it!" she exclaimed handing over the precious bag to me. And I gladly obliged ;) Working through these Christmas presents is delicious work! 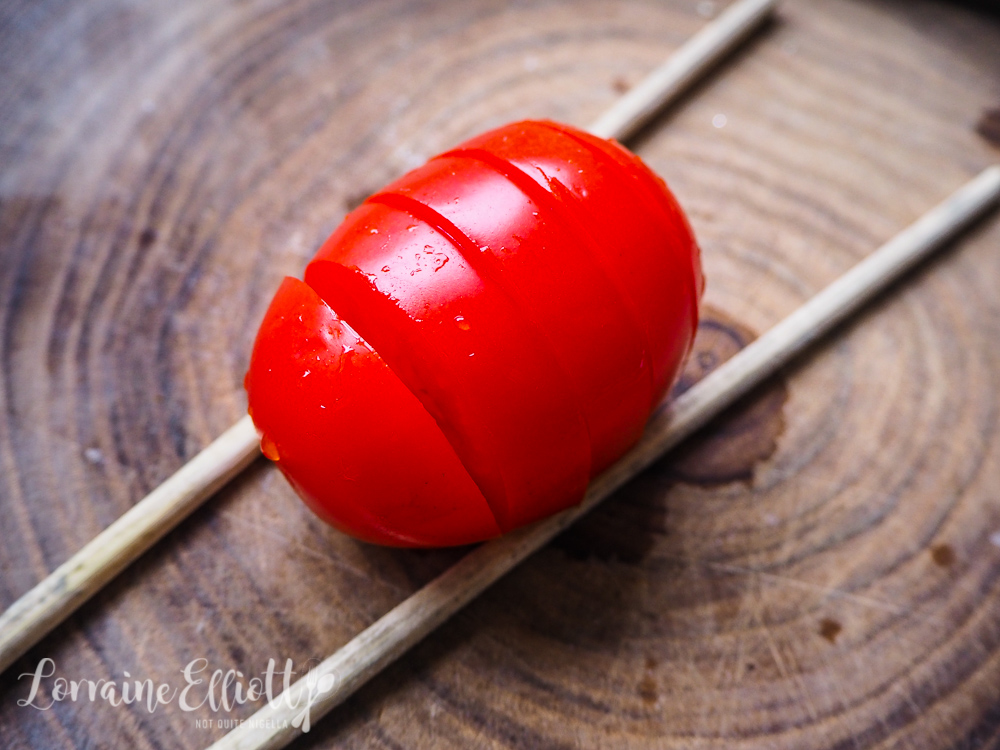 Step 1 - Take a pair of disposable chopsticks and place on either side of the tomato. Cut four slices into the tomato - the chopsticks will prevent you from cutting it all the way through. Slice the bocconcini in four and place the fattest pieces in the centre cuts and the smaller pieces on the side cuts. 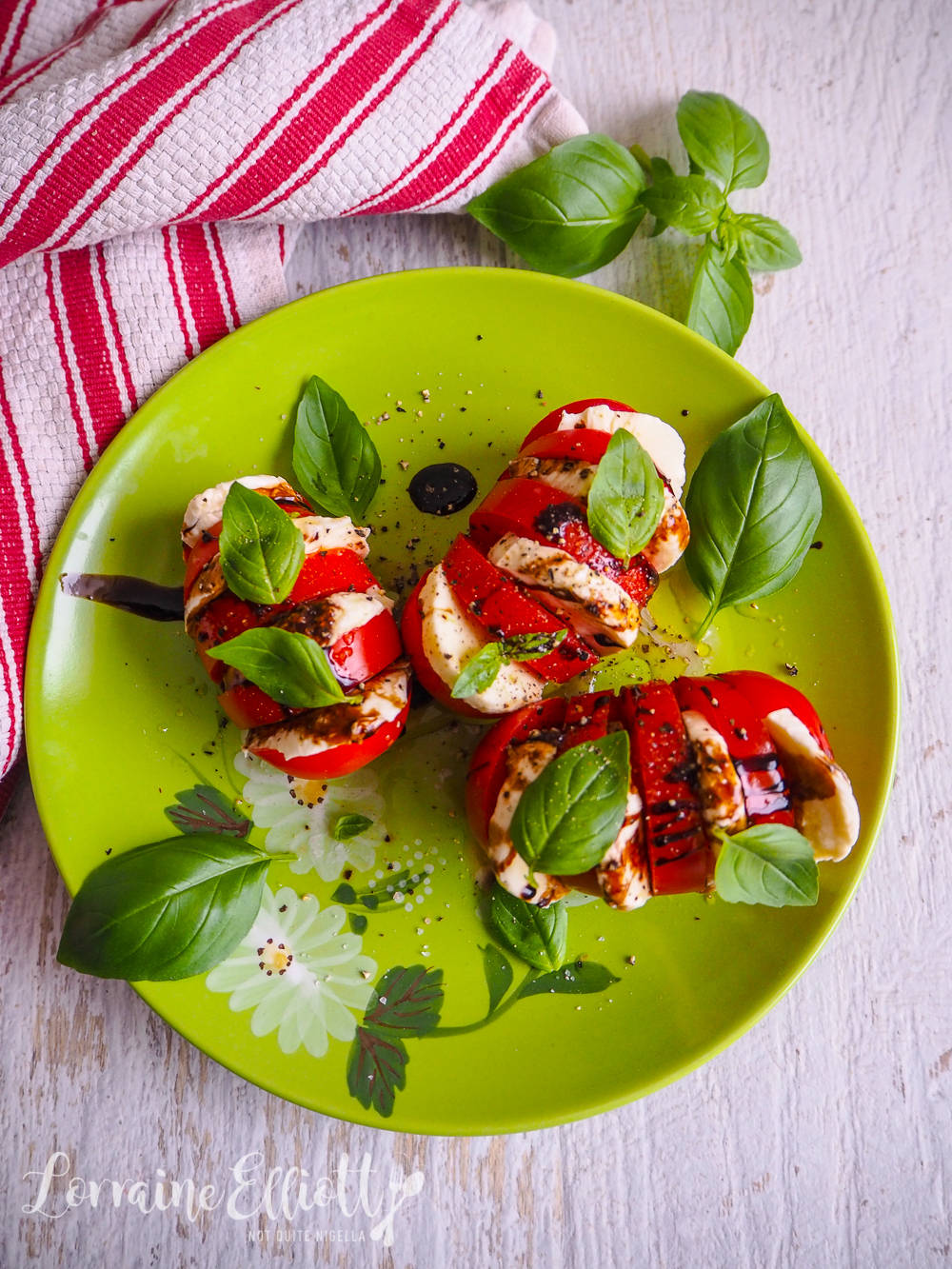 Step 2 - Drizzle with balsamic reduction and olive oil and season with salt and pepper and top with basil leaves.