Where To Eat At Grand Central Markets, Downtown Los Angeles! 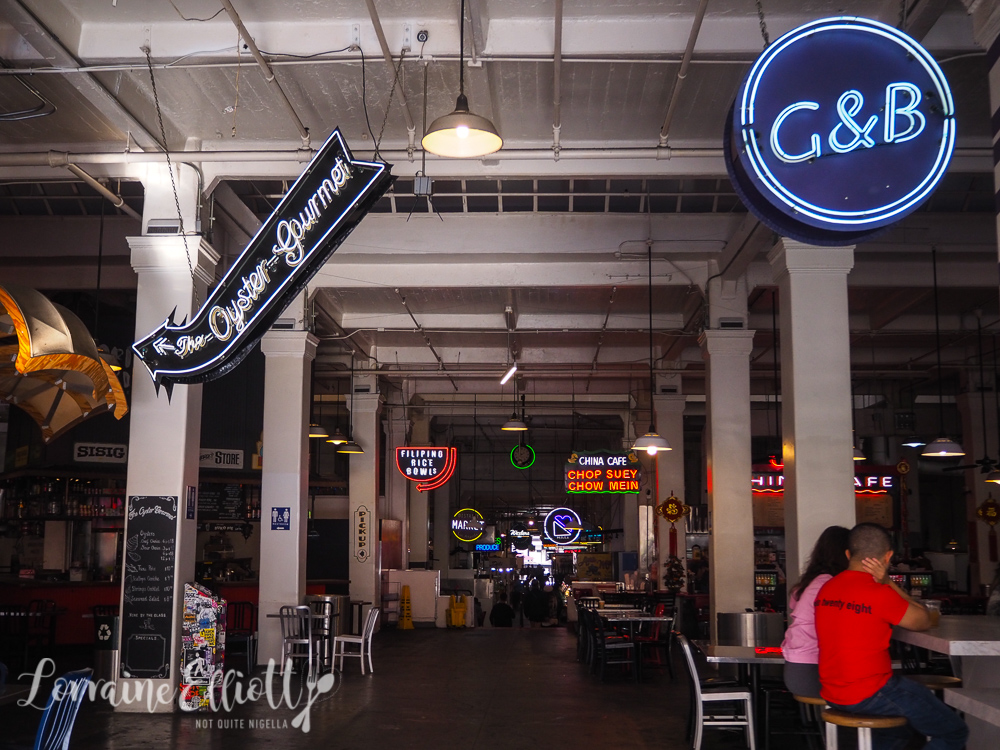 Los Angeles' Grand Central Market is located in Downtown LA. It is the oldest consecutively running market in full operation for over 100 years. The market is housed in what was originally a department store. With so many stands, where is the best place to eat?

Please note that this story was written before the start of the COVID-19 pandemic but has been edited to show the businesses that are still in operation. 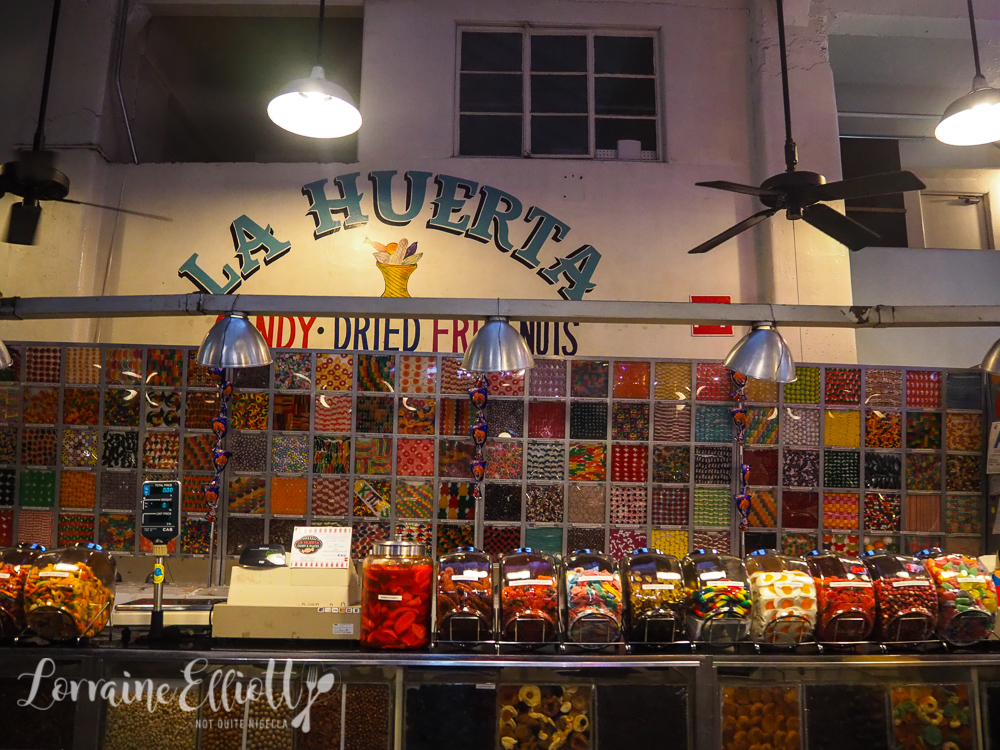 Downtown LA has been experiencing a surge of development. Historically the wealthiest people in Los Angeles lived in Bunker Hill just near the markets and they designed the "Angels flight" funicular railway to service these residents so that they could shop at the market and take their goods home. Up until relatively recently the only reason to visit Downtown LA or DTLA was to see an attorney, lawyer or to watch a basketball game. 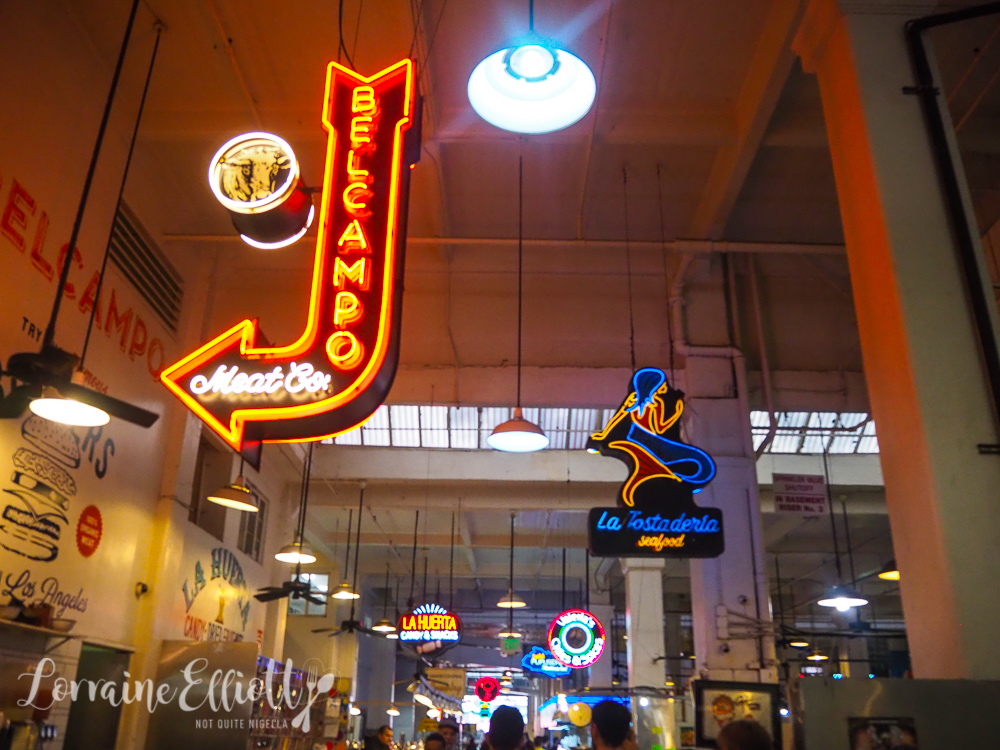 Grand Central Market has over 30 vendors and it is a mix of new and legacy vendors. China Cafe opened in 1960 while Roast To Go has been operating since 1952. Sari Sari is run by a James Beard nominated Chef Margarita Manzke while other stands are cheap and cheerful cash only places. 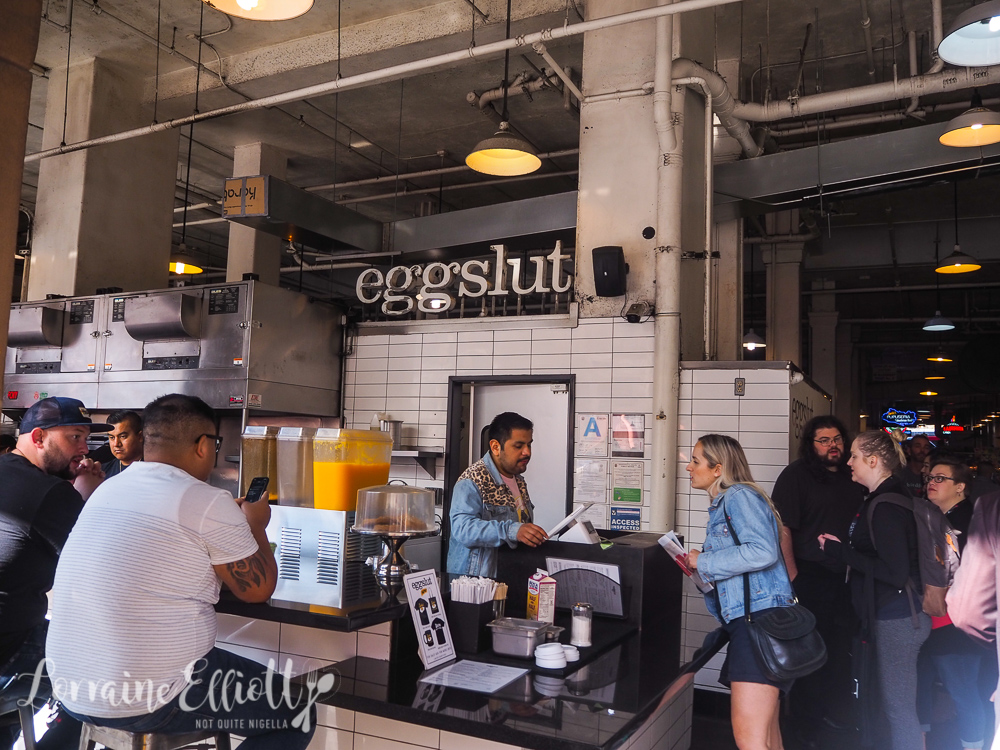 If queues are anything to go by, the most popular stand at Grand Central Market is definitely Eggslut, Instagram darling's eatery where chef Alvin Cailan is ironically quite over Instagram friendly food. Eggslut's signature dish is the Slut which is a jar of potato purée with a cage free coddled egg on top as well as three slices of toast. It was nice but we all swooned more over the Fairfax sandwich. 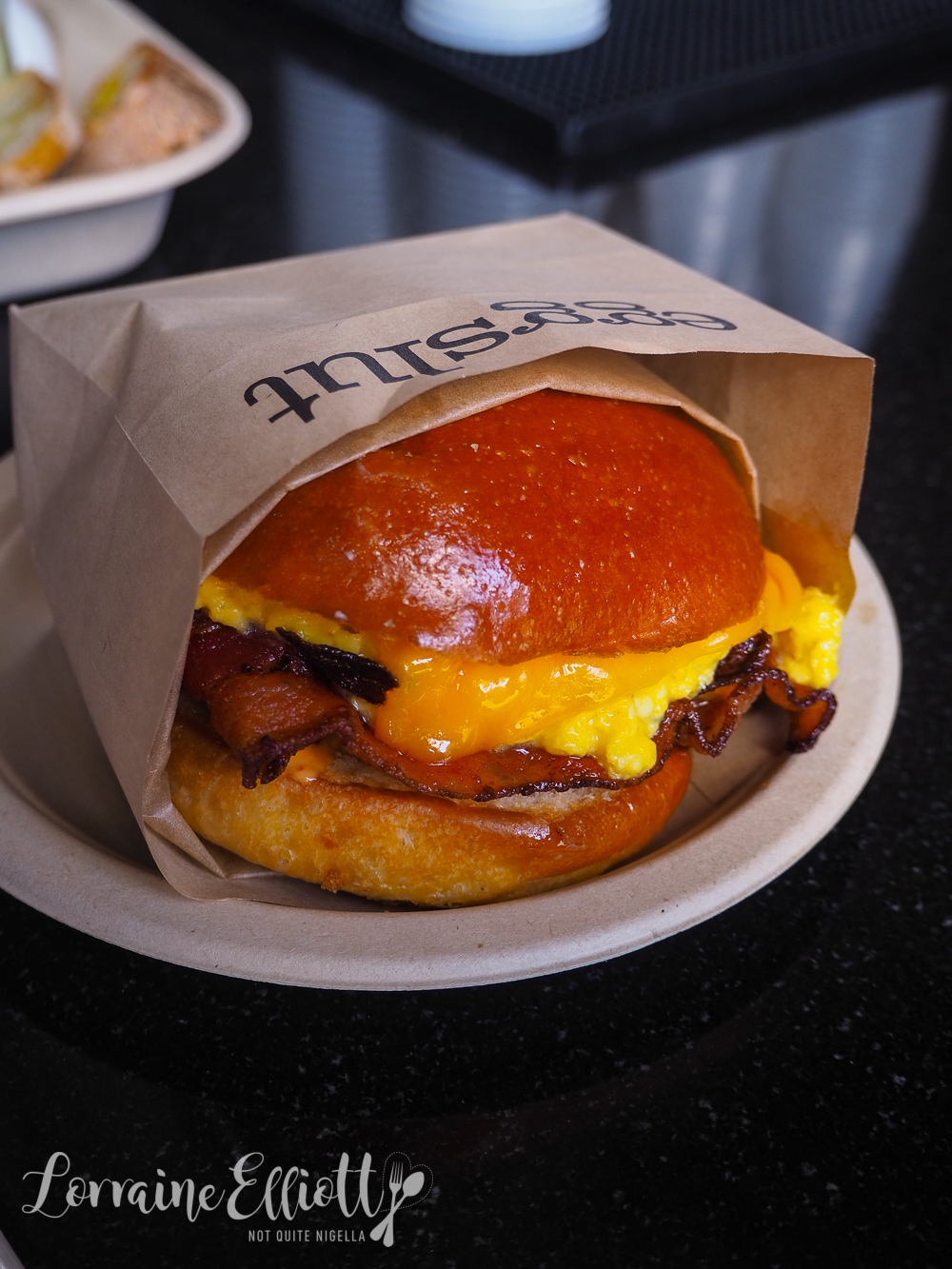 The Fairfax sandwich is made up of cage free scrambled eggs, sharp cheddar cheese, chives, caramelised onion, crispy bacon, hot sauce and mayonnaise on a brioche bun. It's basically one of the most delicious sandwiches you’ll ever wrap your mouth around and is worth the hype. 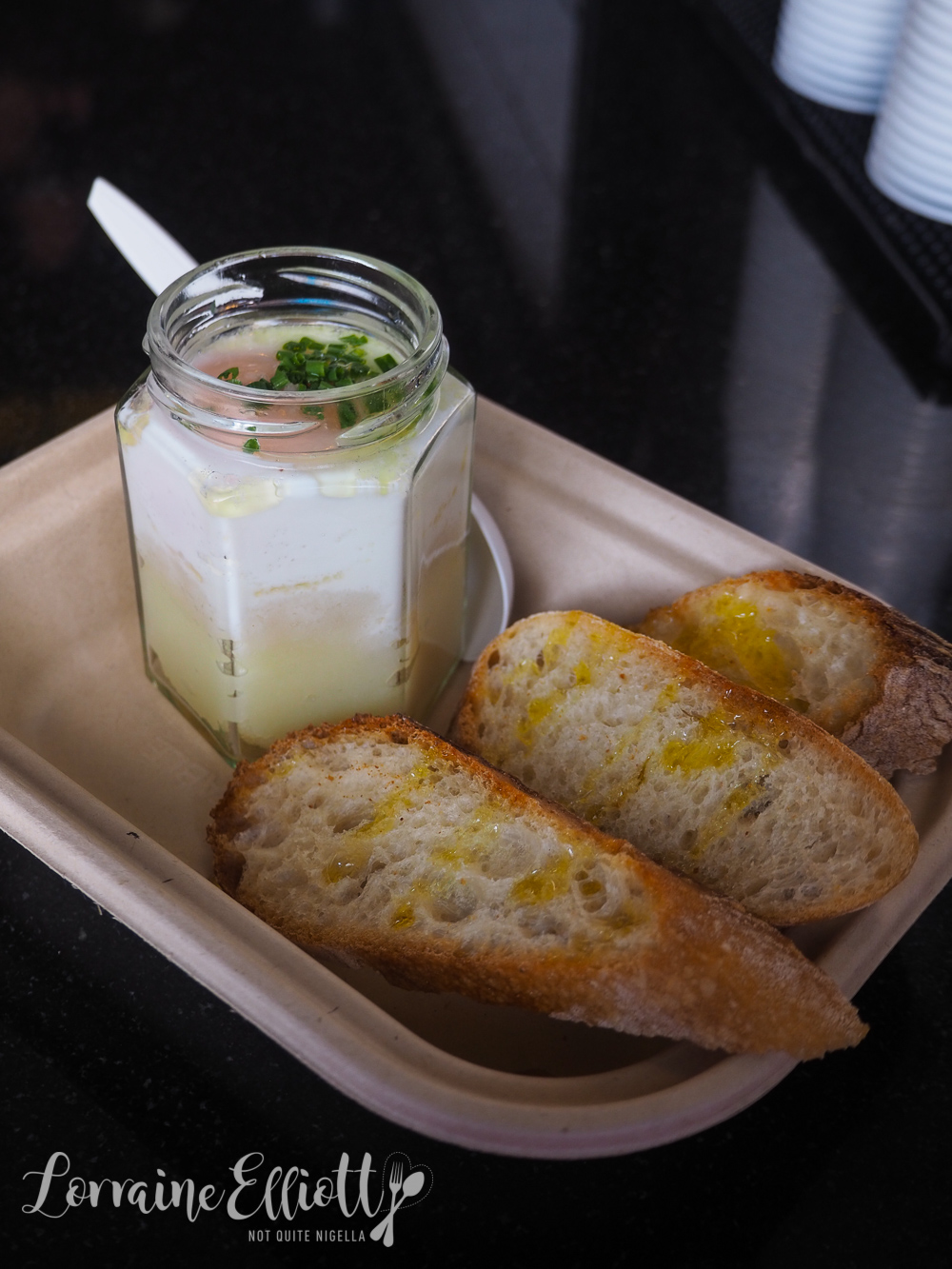 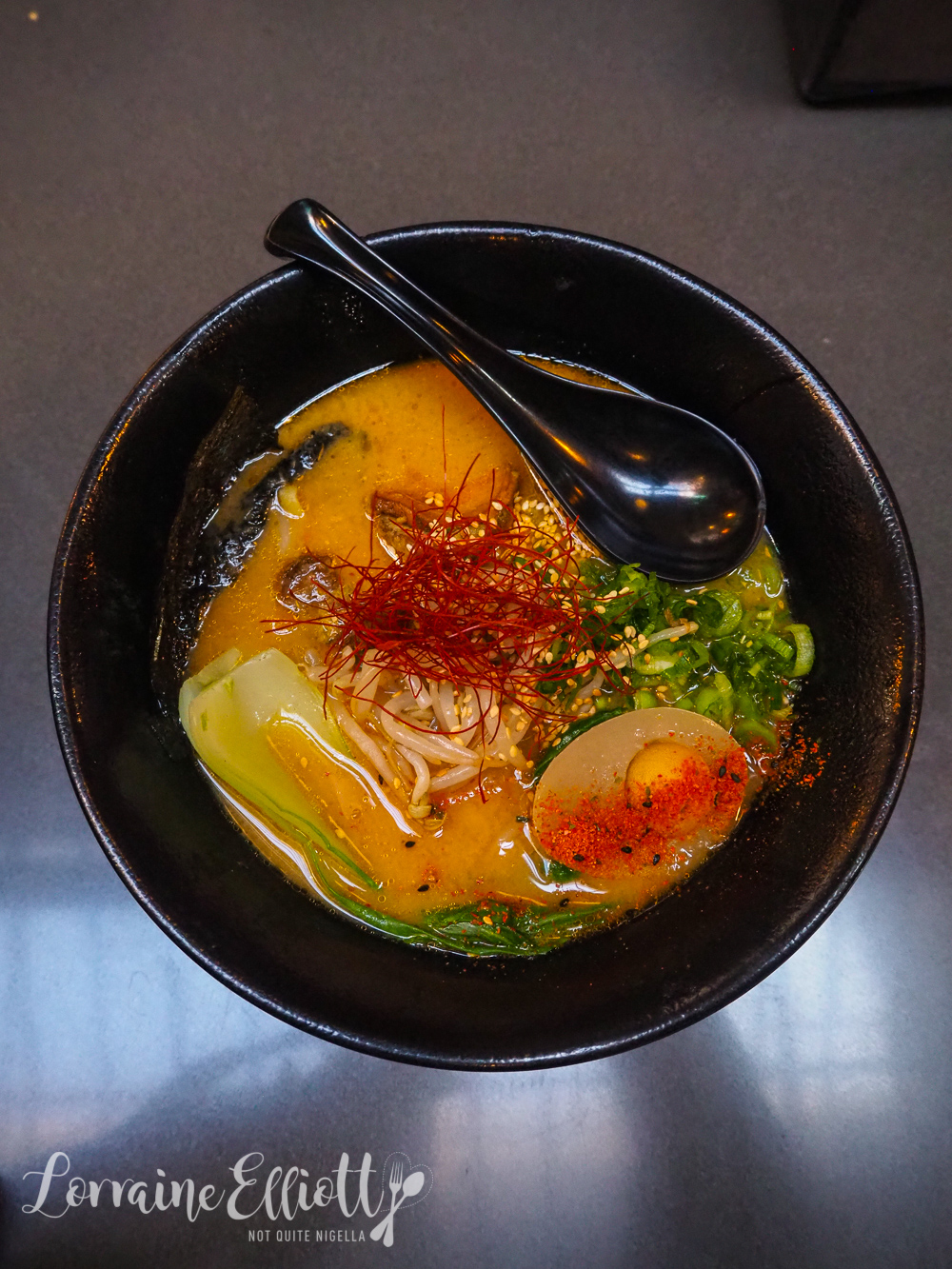 Our next stop is Ramen Hood, famous for their vegan ramen. The ramen broth is a 2 day process using kelp, shiitake mushrooms, onions, white miso and salt but the primary ingredient is husked and pressure cooked sunflower seeds that are blended up to give the soup a slightly creamy texture. 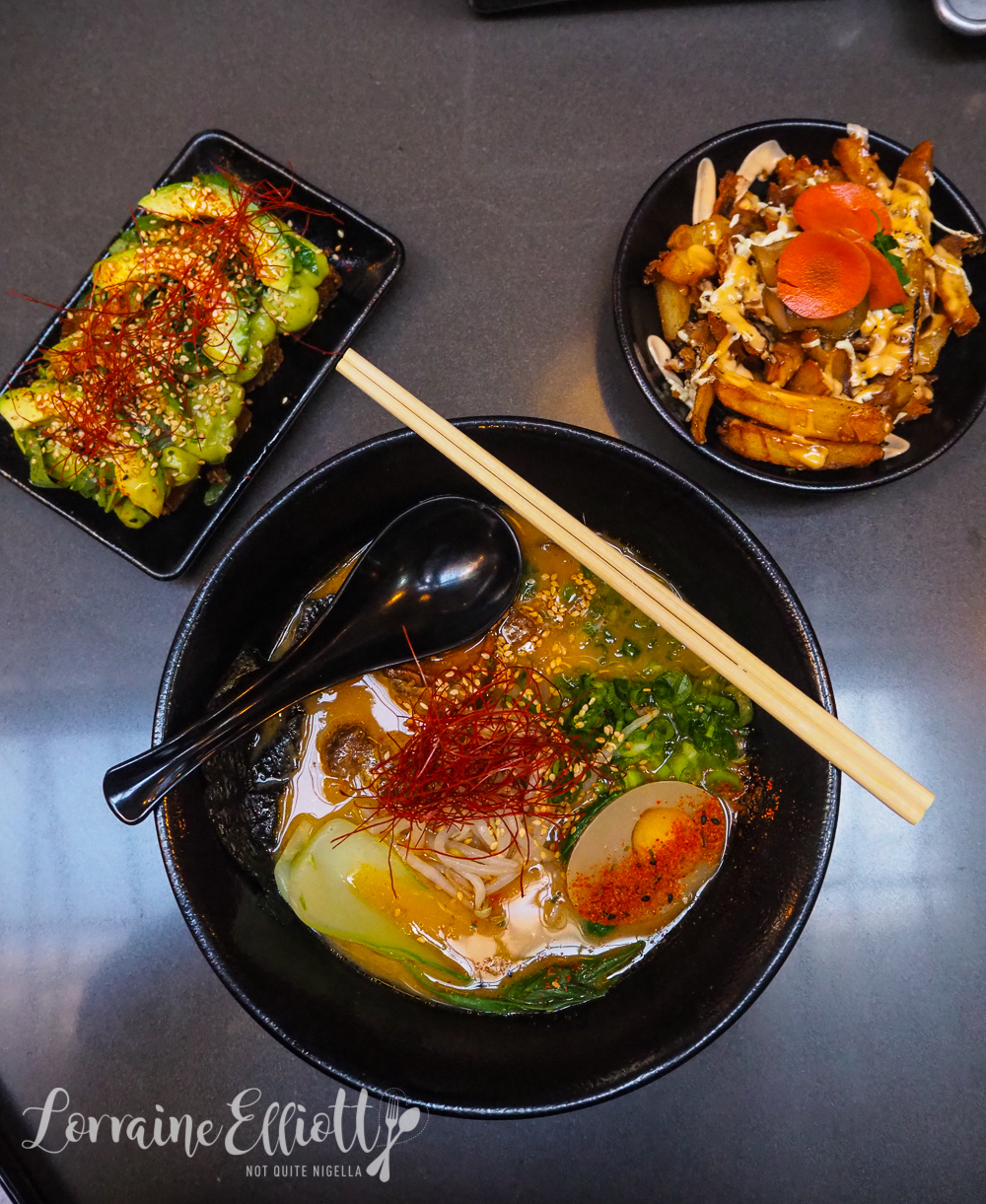 I order a spicy ramen that comes with a vegan egg, slices of fried eggplant, beansprouts greens and spring onion. The vegan egg yolk is made with nutritional yeast, sea salt and vitamin b while the egg white is made from the ramen broth and agar. Give it a drizzle of sesame chilli oil and it’s absolutely heavenly. 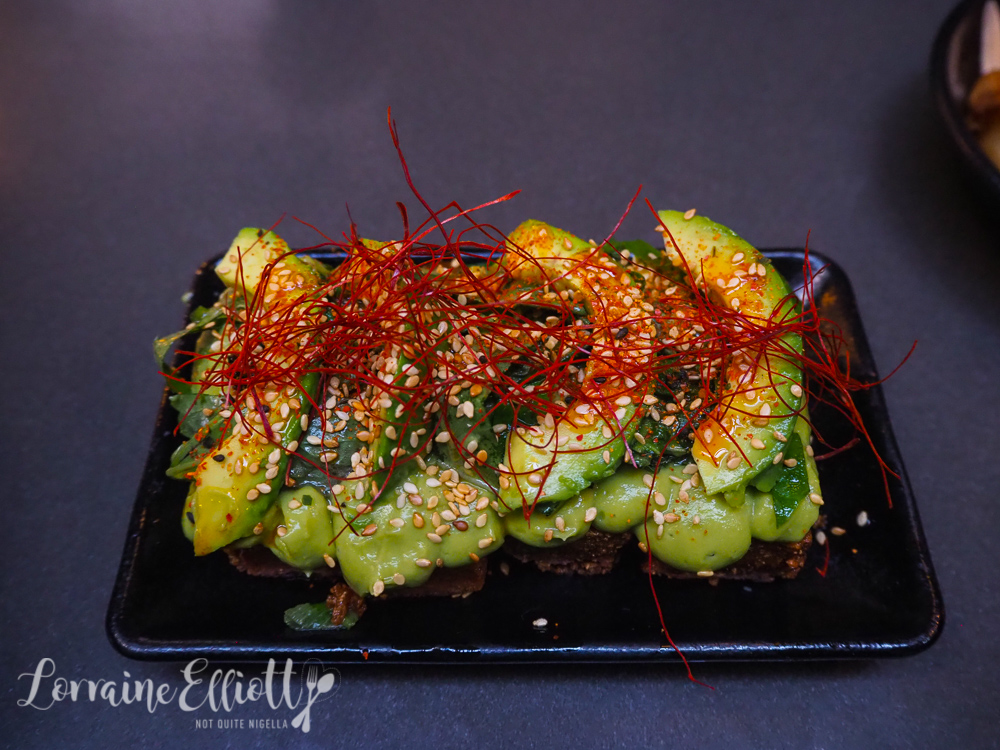 We also order a crispy rice avocado toast which is generous with puréed avocado with lime and chilli as well as slices of avocado and sits on four slices of crispy rice with plenty of chilli spinach and sesame seeds. It's deliciously crispy and creamy at the same time and yes that is indeed the price. 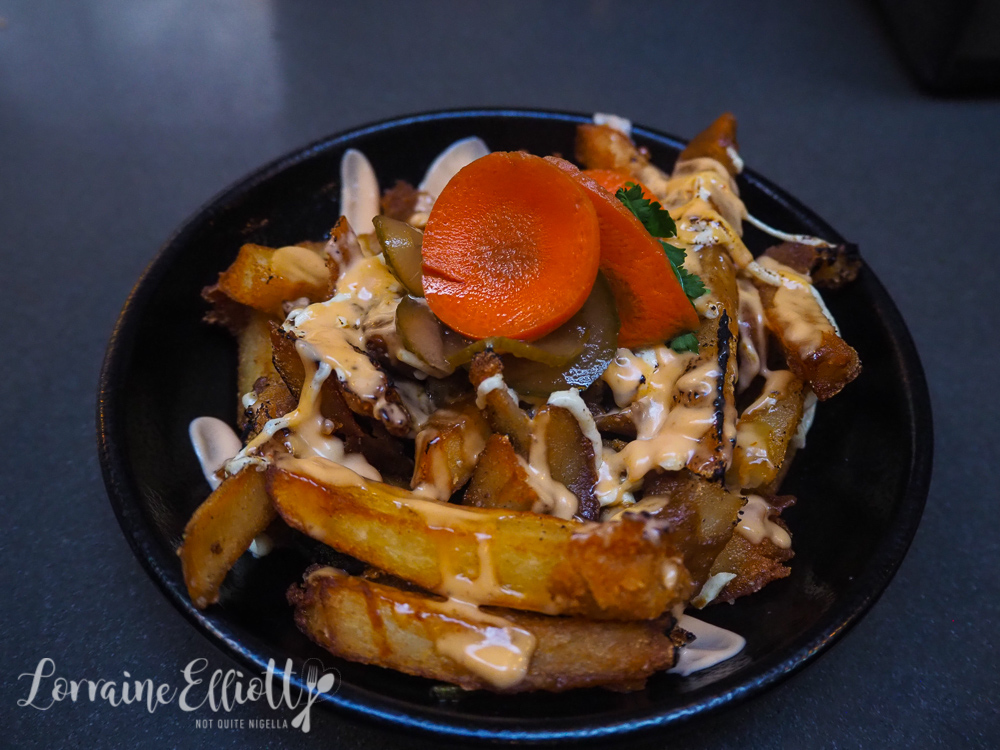 There is also banh mi poutine fries which are thrice cooked fries with a hoisin gravy, pickled vegetables, Sriracha, daiya (plant based) cheese, jalapenos and coriander. These are also tasty although the toppings are quite sweet. 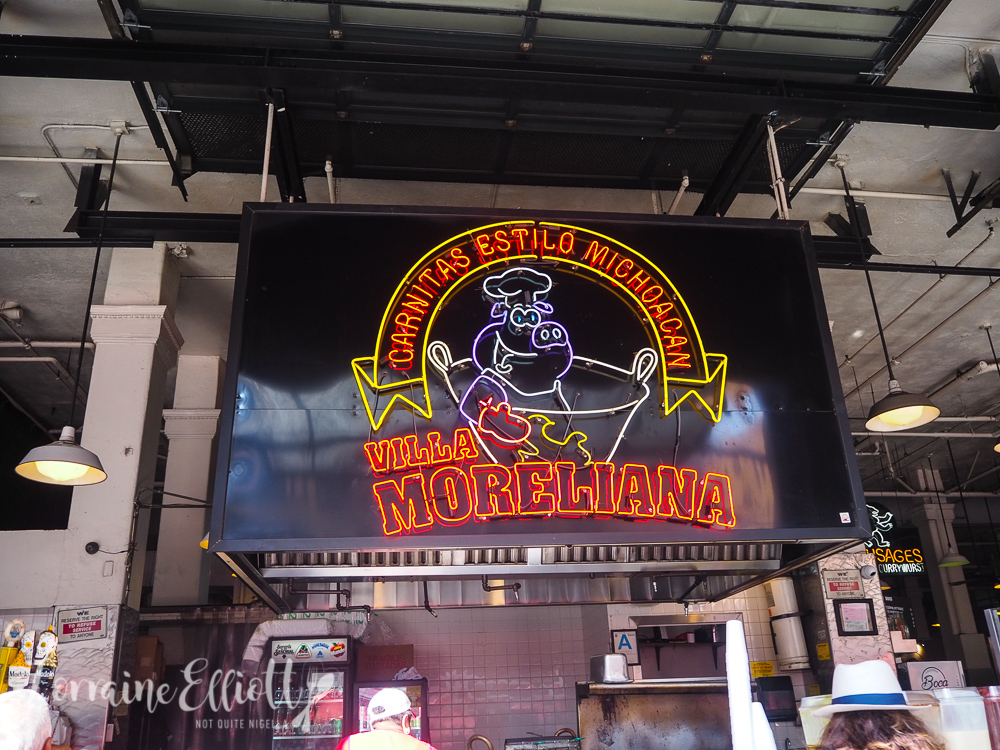 Another very popular stand is Villa Moreliana known for their tacos. It's a low key vibe with a strong Mexican clientele. Perhaps I look confused because the man behind the counter hands me a complimentary taco and I take a bite. It's filled with deliciously melty pork butt or carnitas. 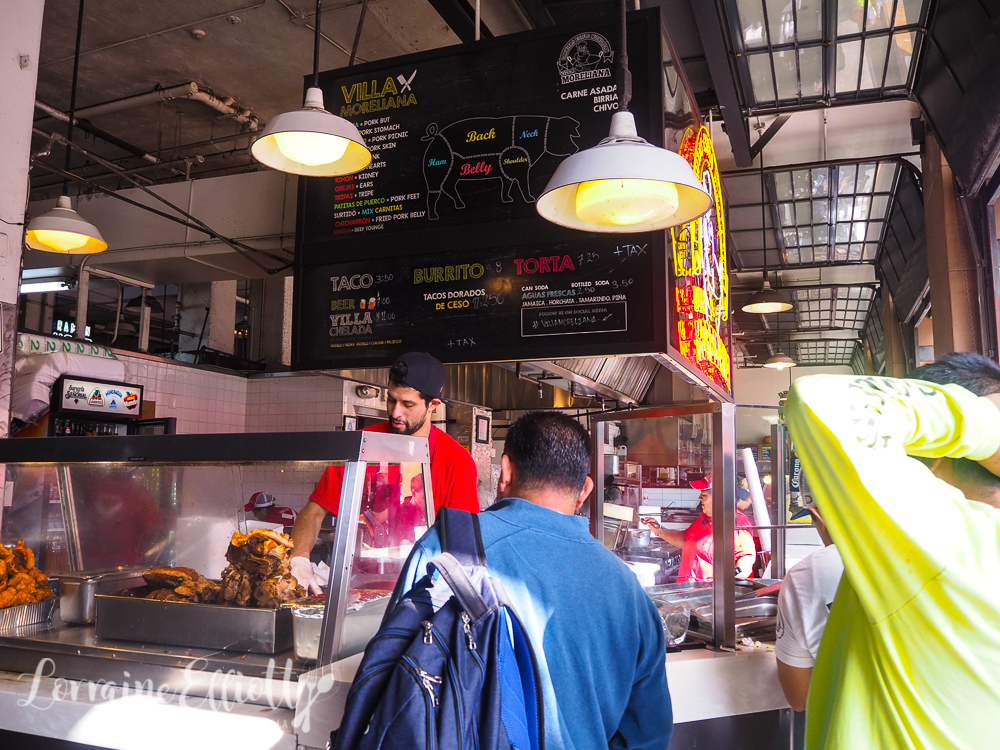 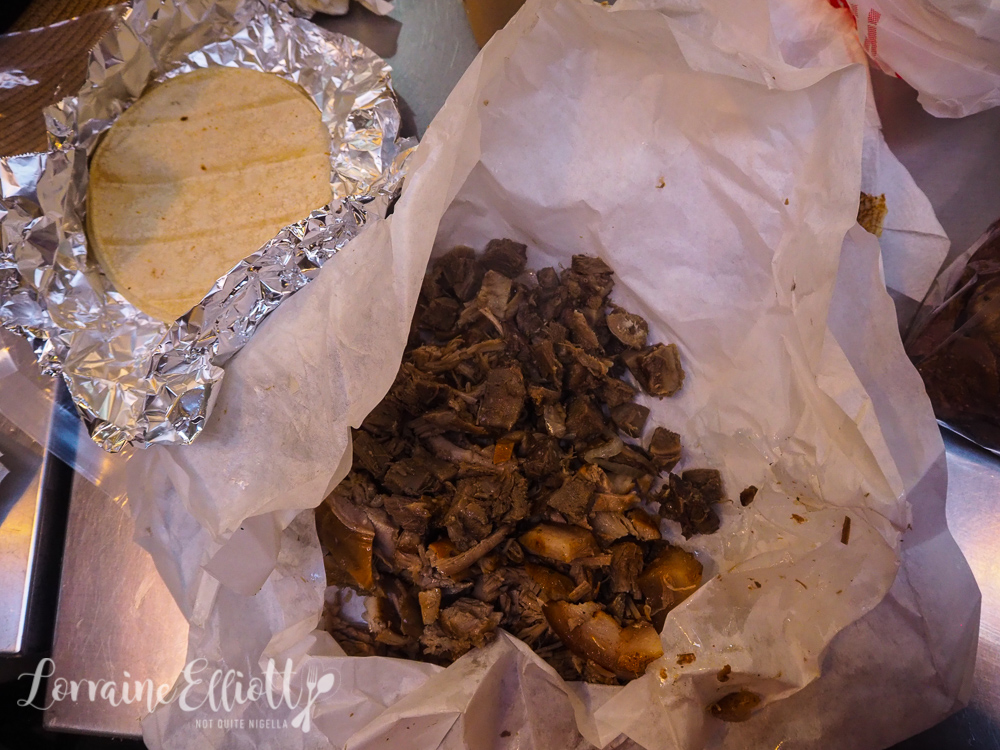 I order a mixture of meats including carnitas and lengua (beef tongue) to go with some tacos. They stuff the tacos very generously around here. The meats are wonderful and at around $17USD a pound they're great value too. 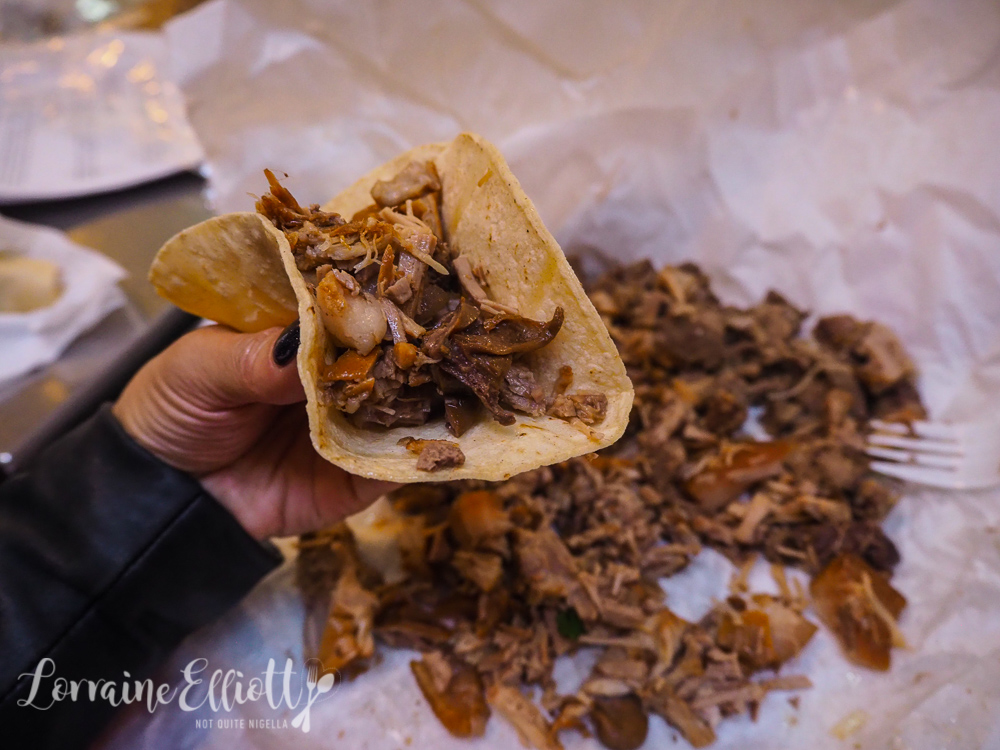 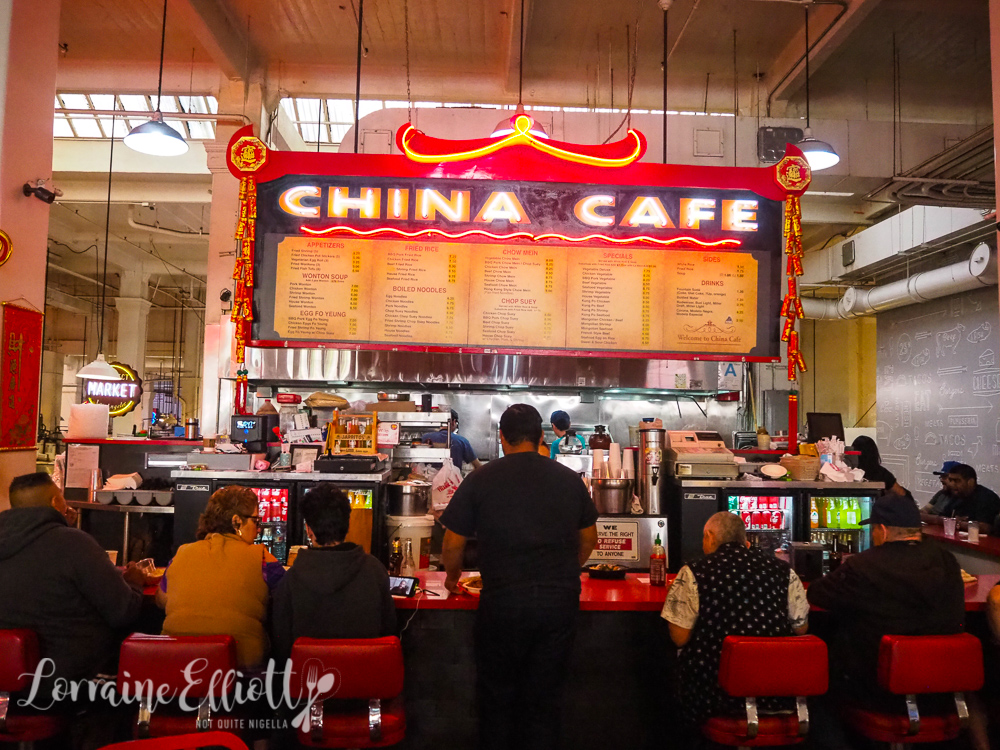 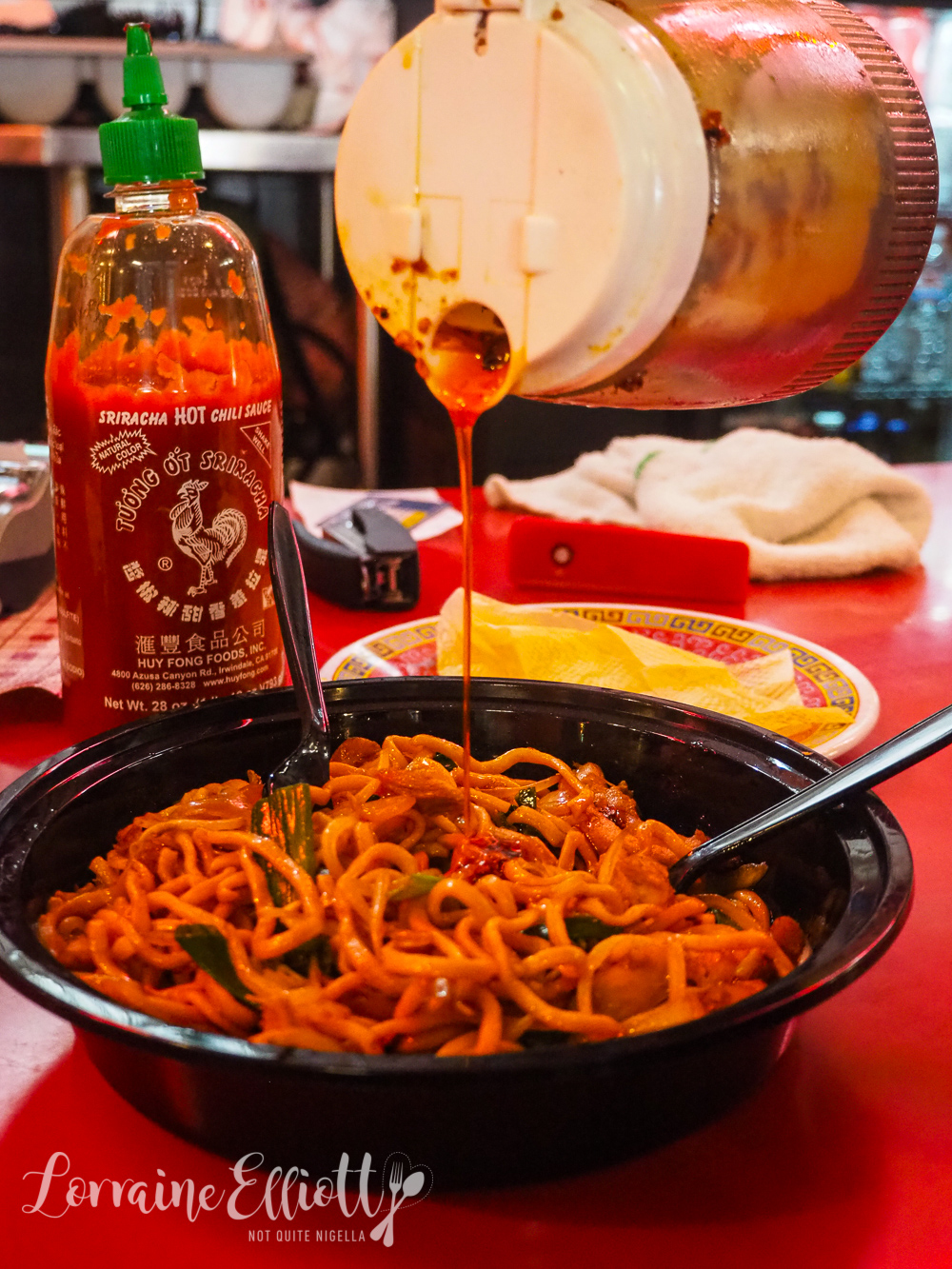 The chicken chow mein is on the sweet side but you can also add some chilli oil from the huge plastic jug that they bring out. 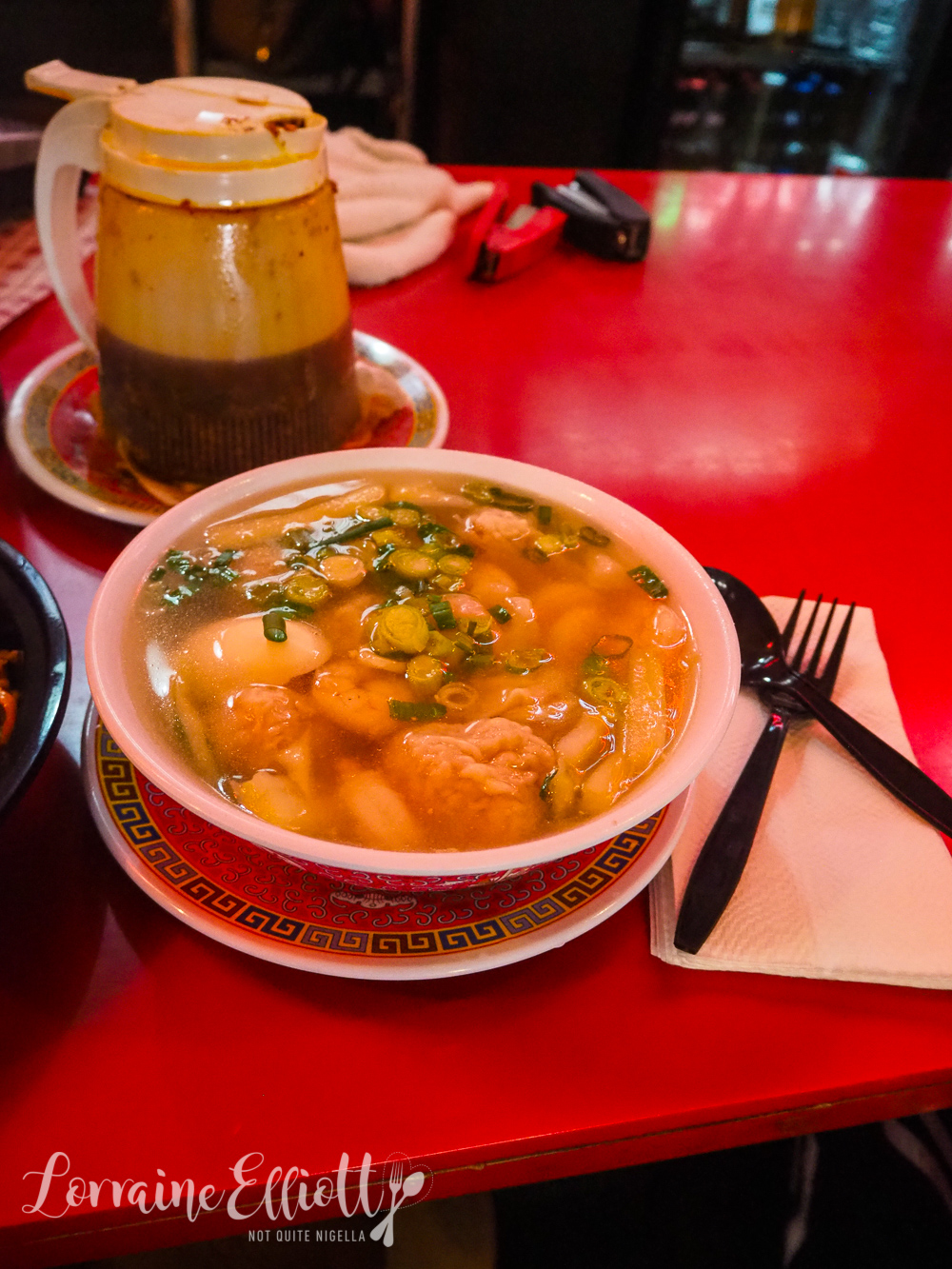 The wonton soup is very tasty with some fat pork wontons, a few prawns and a flavoursome broth (which is just what we need with all of these late nights and early mornings). We watch a couple of women at the table next to us bring out an avocado and rice which they add it to the wonton soup. One of the women sees us watching and offers us a half avocado to try it and do you know what? It's delicious! New food hack! 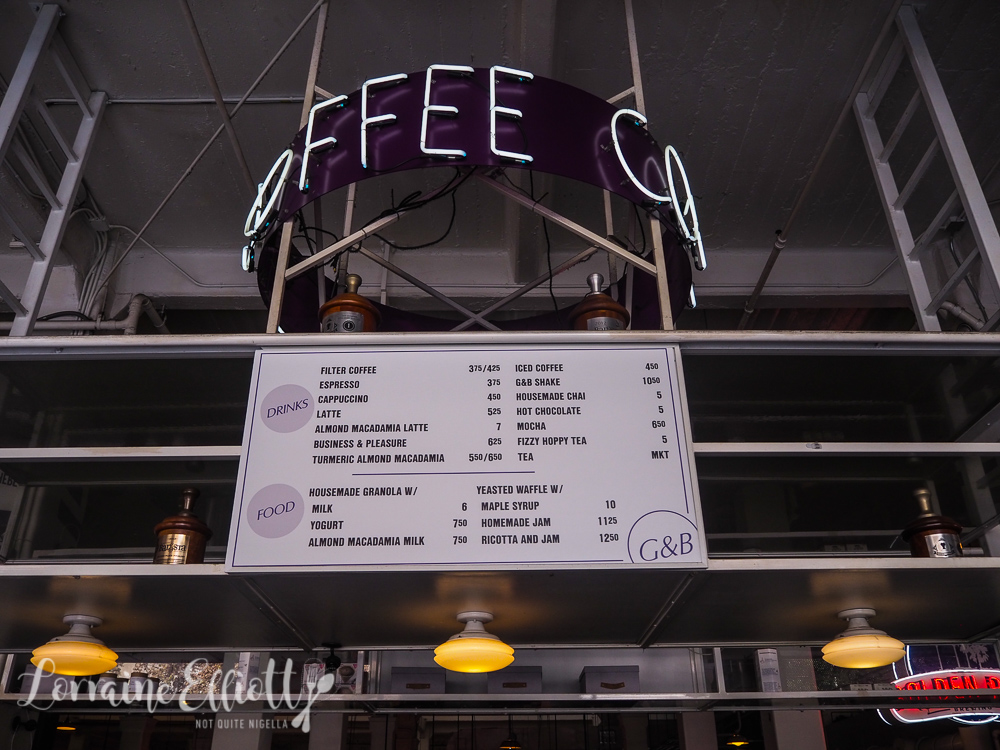 At G&B coffee you can mix business and pleasure – literally. It’s a very extra type of setup and involves three cups: first there’s a double espresso in a cup and then there is an almond macadamia cappuccino lightly sweetened. The 3rd cup is a sparkling hoppy tea. Very LA. 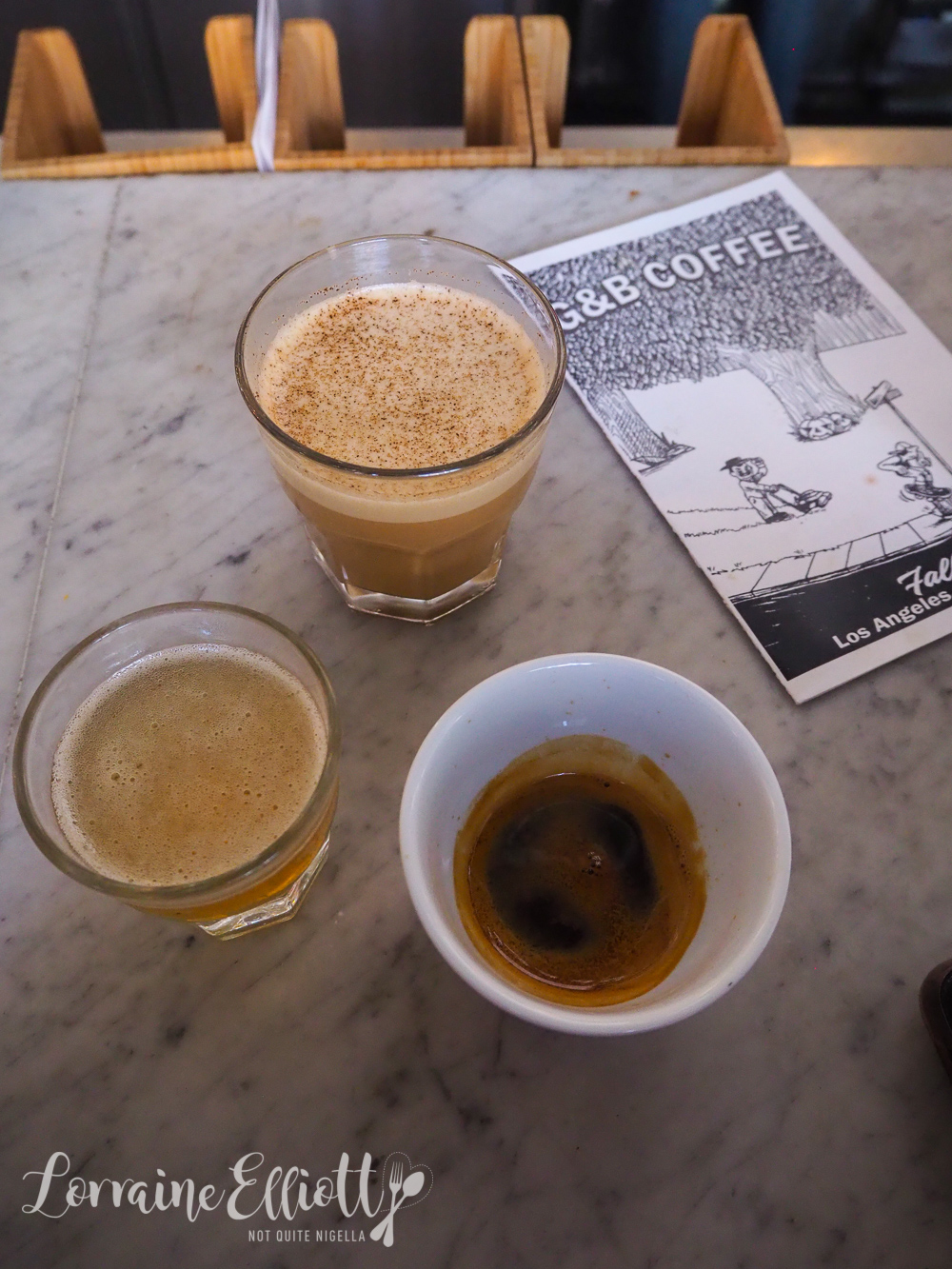 You can drink it in whatever order you want but they recommend the double espresso first (the business) and then the coffee tea and then finish with the milky slightly sweetened cappuccino (the pleasure). 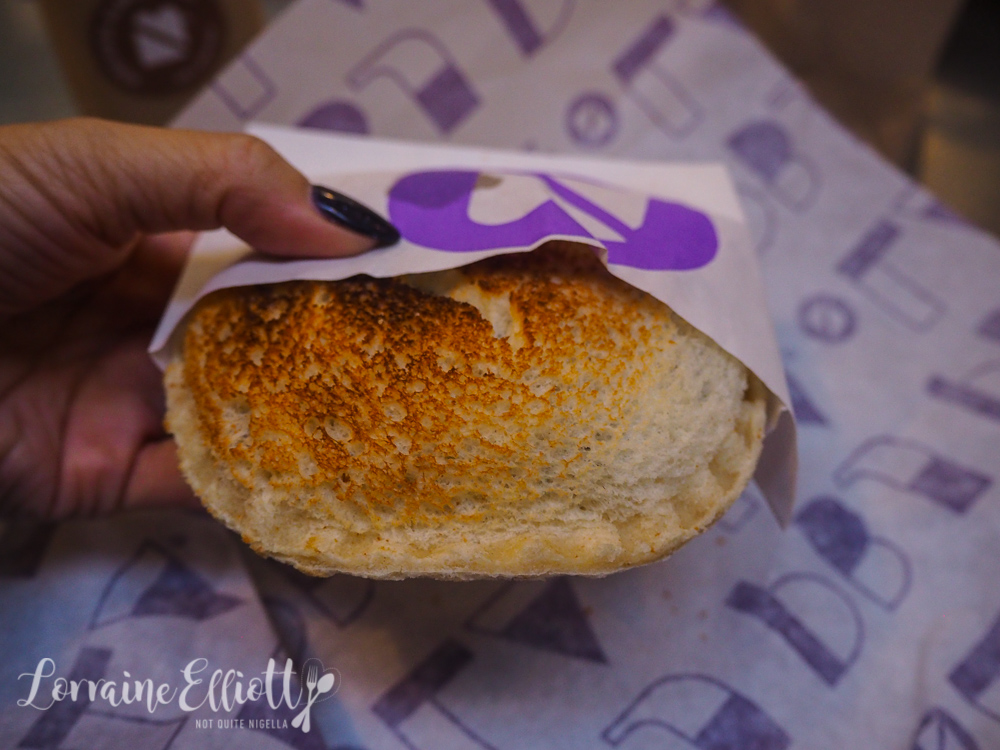 PB and J is almost like the national sandwich of America so it's no surprise that there's a stand dedicated to the humble peanut butter and jelly sandwich called PBJ.LA. The most popular is the "redeye" with espresso (Jaguar Forest Coffee) peanut butter with dark chocolate raspberry jam. Honestly it’s a little dry and quite burnt tasting and I LOVE peanut butter so that was disappointing. 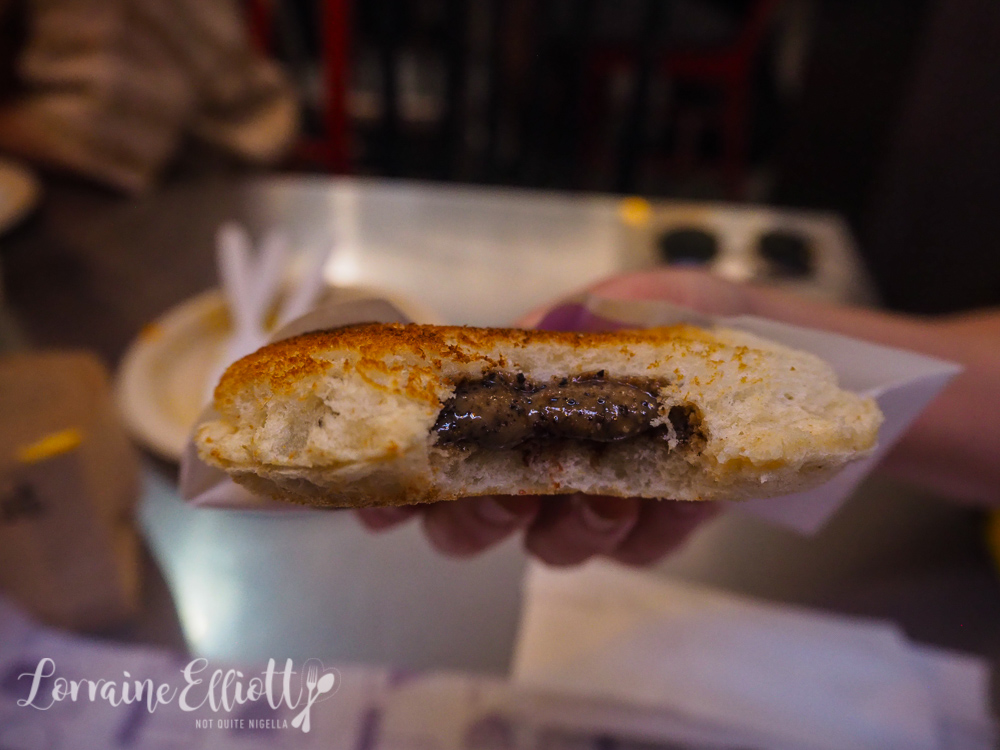 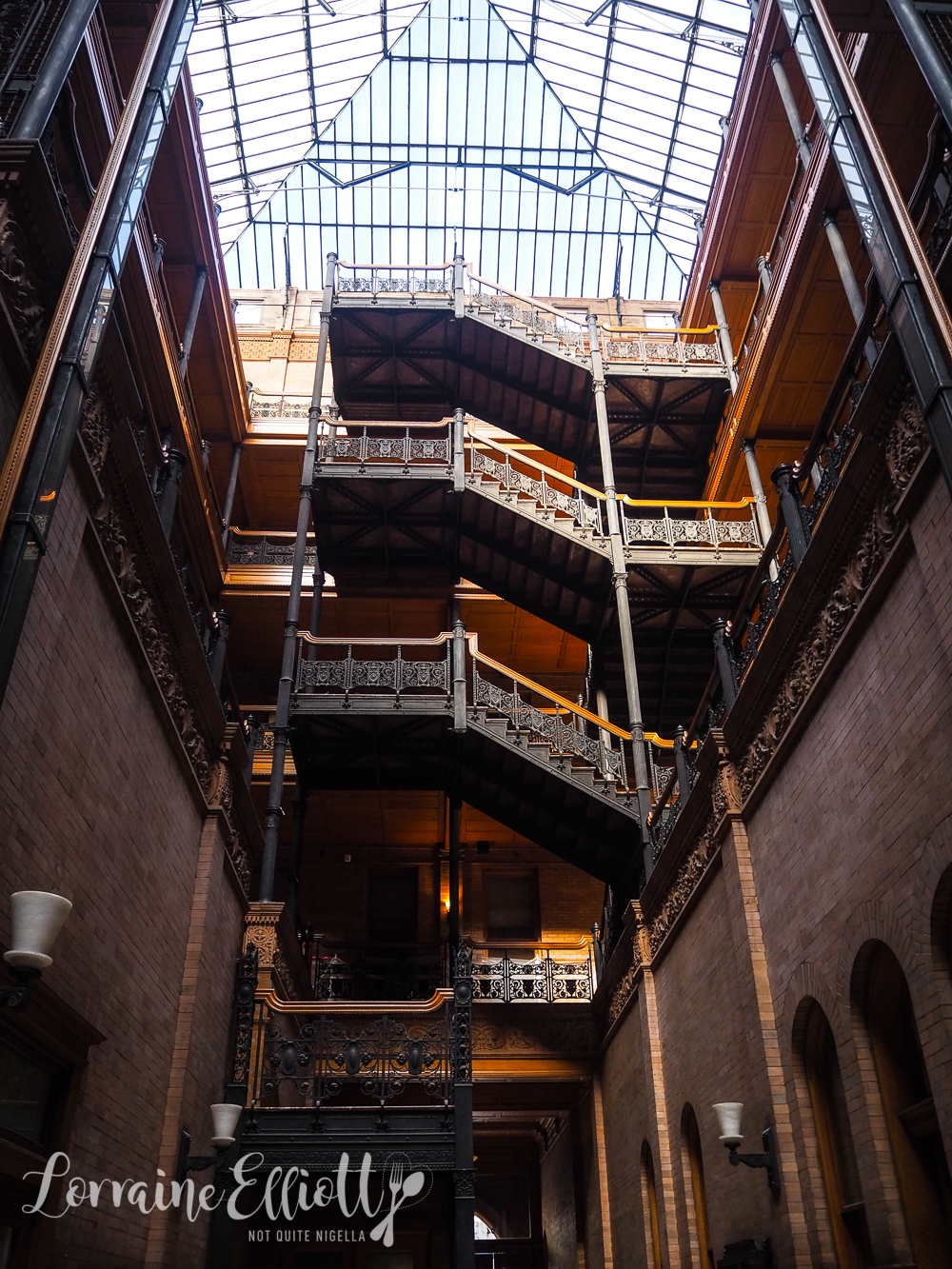 Last but not least is a tip for movie aficionados: opposite Grand Central Market lies the Bradbury Building made famous by the film Blade Runner. Non tenants can only access the lobby but it's a gorgeous building to take a peek at. 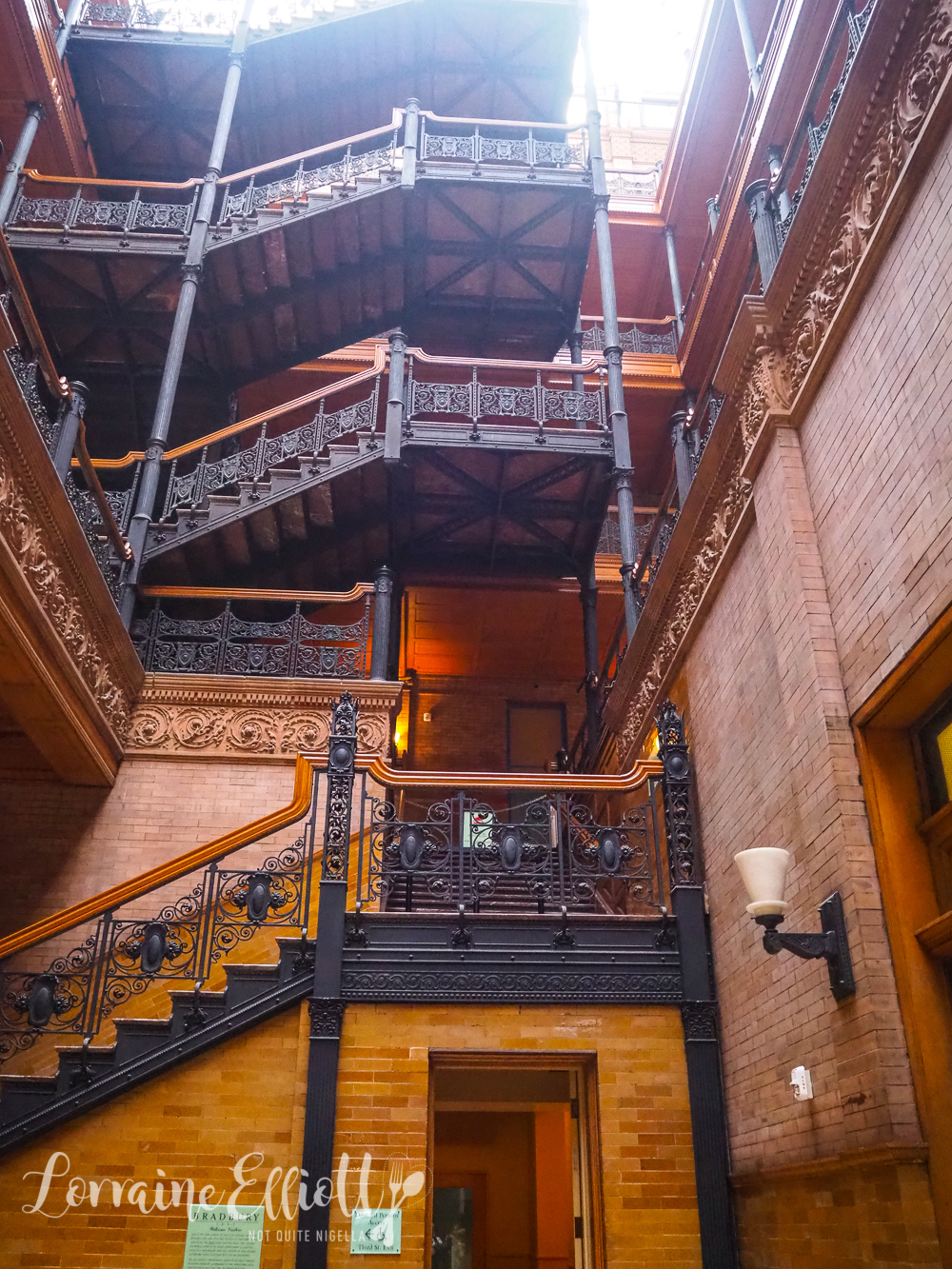 So tell me Dear Reader, which stand would you head to first? Do you recognise that building?

All of the food in this post was independently paid for. NQN was a guest of Discover LA but all opinions remain her own. She travelled to San Francisco and Los Angeles with United Airlines.